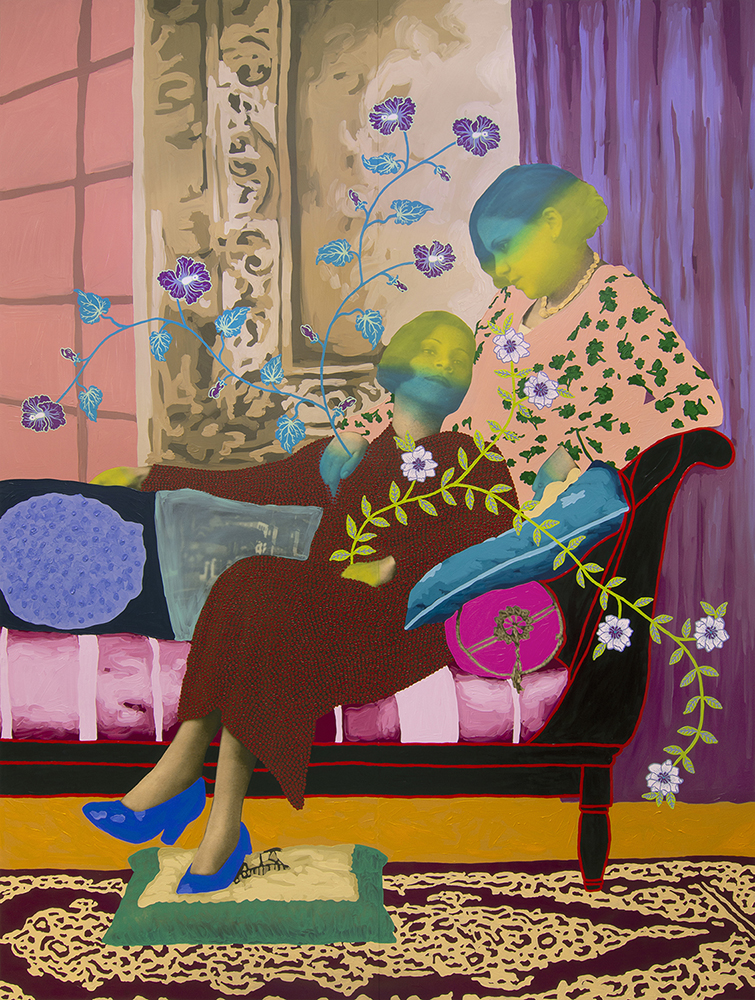 When personal snapshots are lost or abandoned by their owners, the memories they represent are lost with them. Even those kept safe in family albums are often only a generation or two away from becoming unrecognizable to those who inherit them. Art historian Geoffrey Batchen describes these photographs as “memories without memory, stories without storytellers.” How, then, do photographs- simulacrums of memory- function when they begin to forget what they once knew? In Forgetting is so long, Daisy Patton transforms them into beautiful homages to love, loss, and the relationship between them. Tenderly painting each image by hand, layers of vibrant colors and patterns become both visual manifestations of a past erased by time and the source of new life. 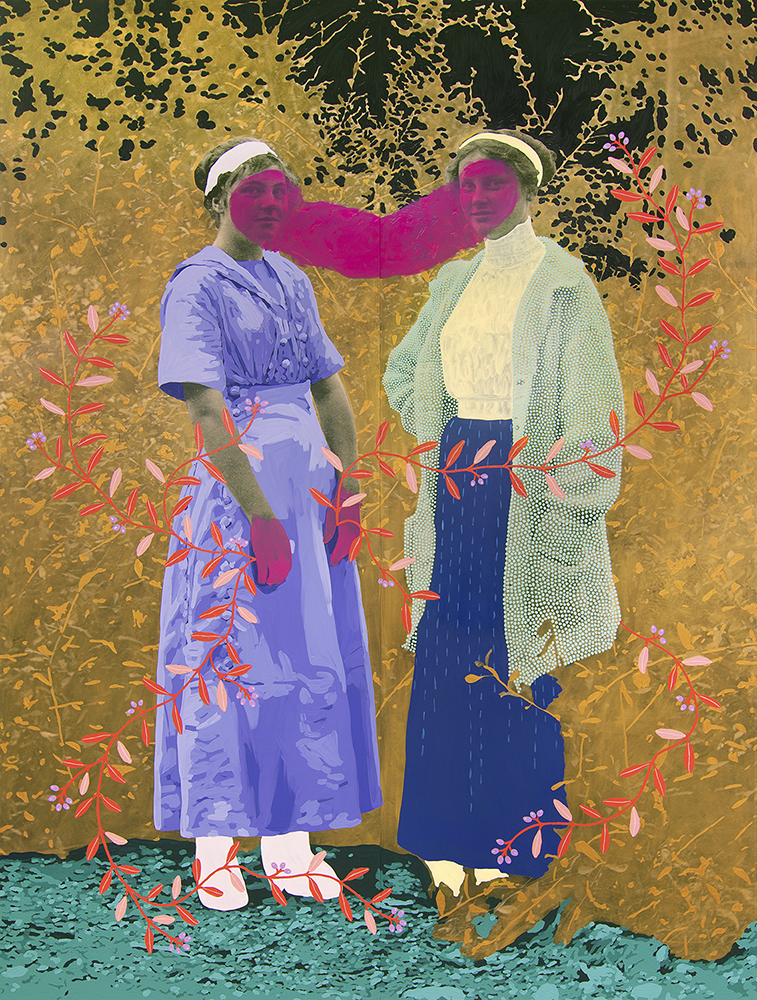 Forgetting is So Long

“What rituals are useful to locating someone who’s gone.
Our story has no language. My loss always in communication with your loss.”

—Ella Longpre, How to Keep You Alive

Who do we choose to remember, and how? These ideas are fraught terrain that cross family relationships, identities, and collective memorialization. For some, living memory supports an elongation of our lives—we only succumb to a blank past when our histories are no longer recalled and held by those that once cared for us. A family photograph is such a vessel of retrieving memory. As time accumulates, however, these emotionally laden images become unknowable, missing their necessary translators. Despite this gradual disintegration of previous selves, our bodies are still affected by the actions of our ancestors. Their lives are encoded into our beings through often-complex interconnections, whether through epigenetics or other practices preserved through time. The inherent loss embedded in these discarded photographs is intertwined with the fragility of the body itself. The depicted bodies can both reveal and conceal embodied language, personality, as well as emotional and physical health. These ties to corporeality and lineages hold us in ways that can manifest as a tender embrace or even a suffocation.

In Forgetting is so long, I collect abandoned family photographs, enlarge them to life-size, and paint over them as a kind of re-enlivening, removing the individuals from their formerly static location and time. Family photographs are revered vestiges to their loved ones, but if they become unmoored, the images and people within become hauntingly absent. Anthropologist Michael Taussig states that defacing sacred objects forces a “shock into being.” Suddenly, we perceive them as present and piercing. By mixing painting with photography, I seek to lengthen Roland Barthes’ “moment of death” (the photograph) into a loving act of remembrance. Bright swathes of color and the use of painted floral patterns underline relationships and connections to the natural world and beyond, adorning and embellishing these relics with devotional marks of care. These nearly forgotten people are transfigured and “reborn” into a fantastical, liminal place that holds both beauty and joy, temporarily suspended from plunging fully into oblivion. – Daisy Patton 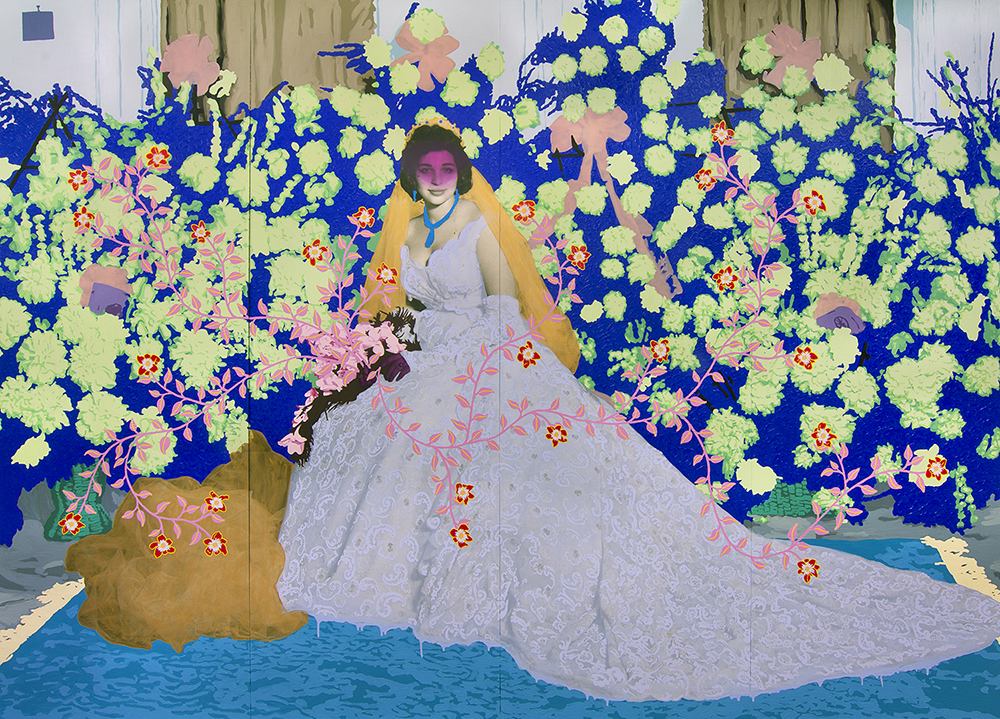 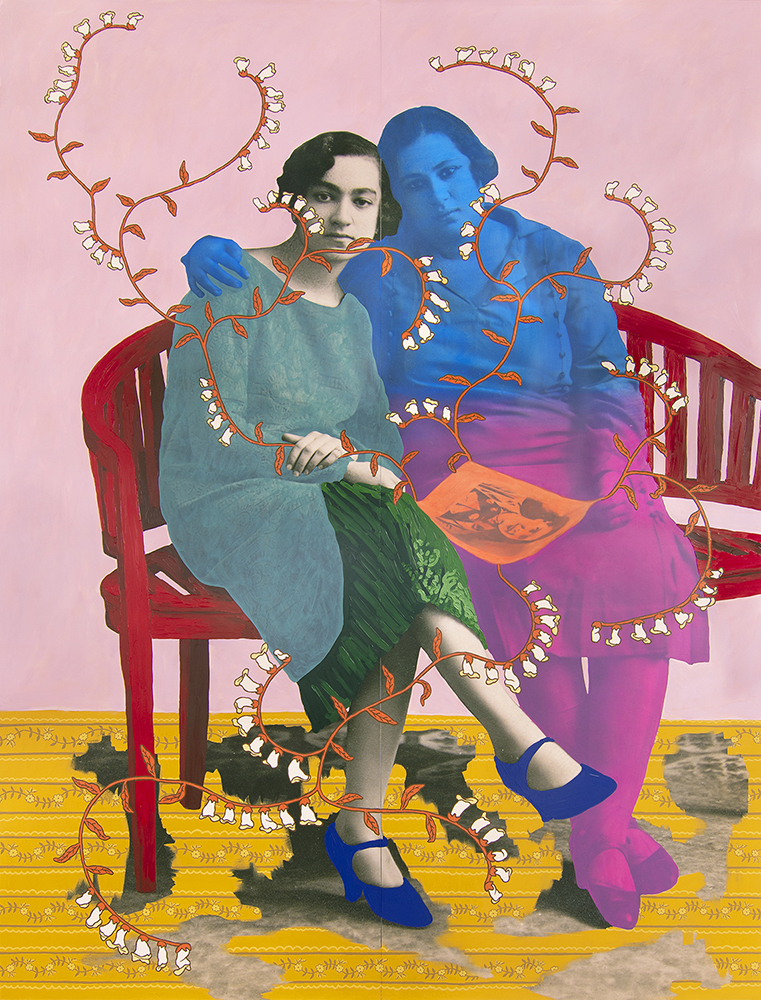 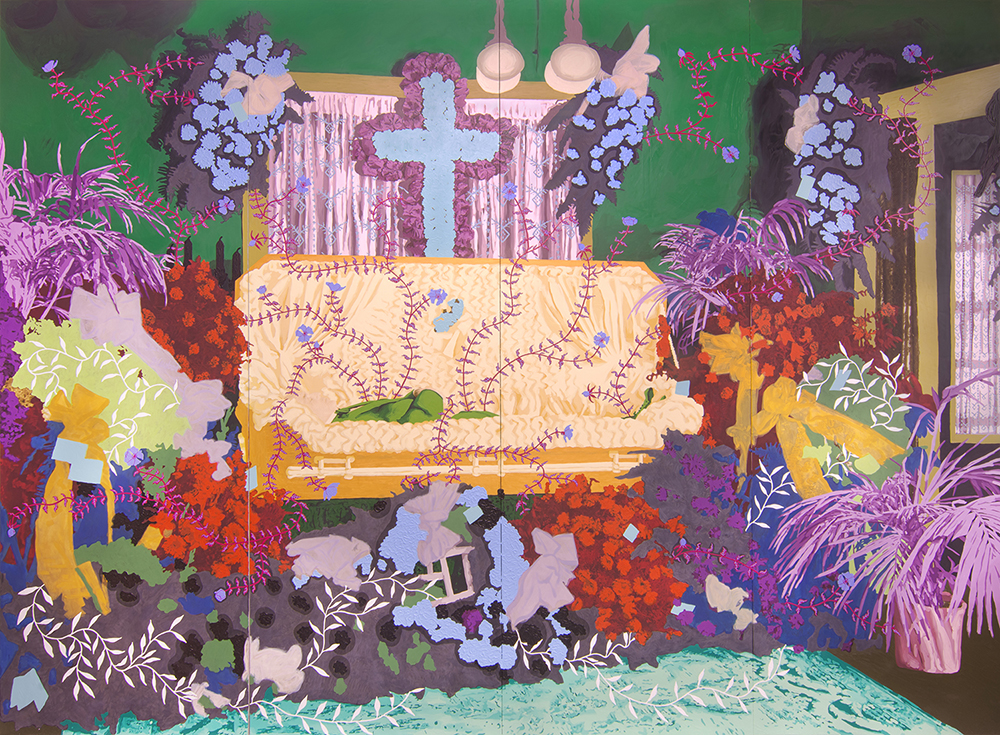 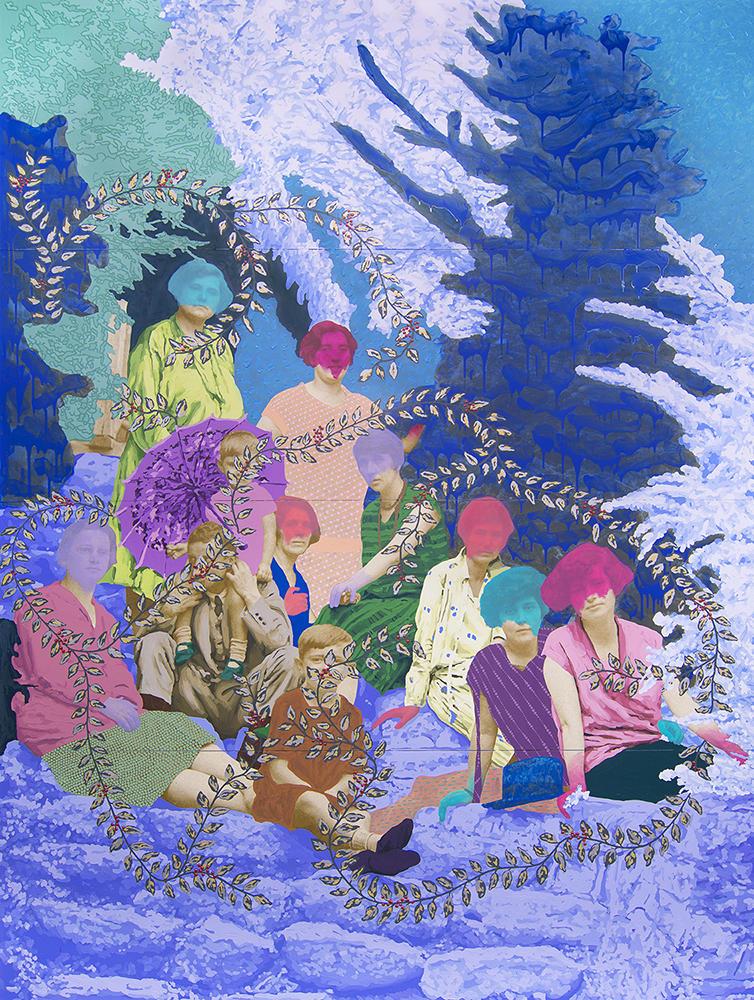 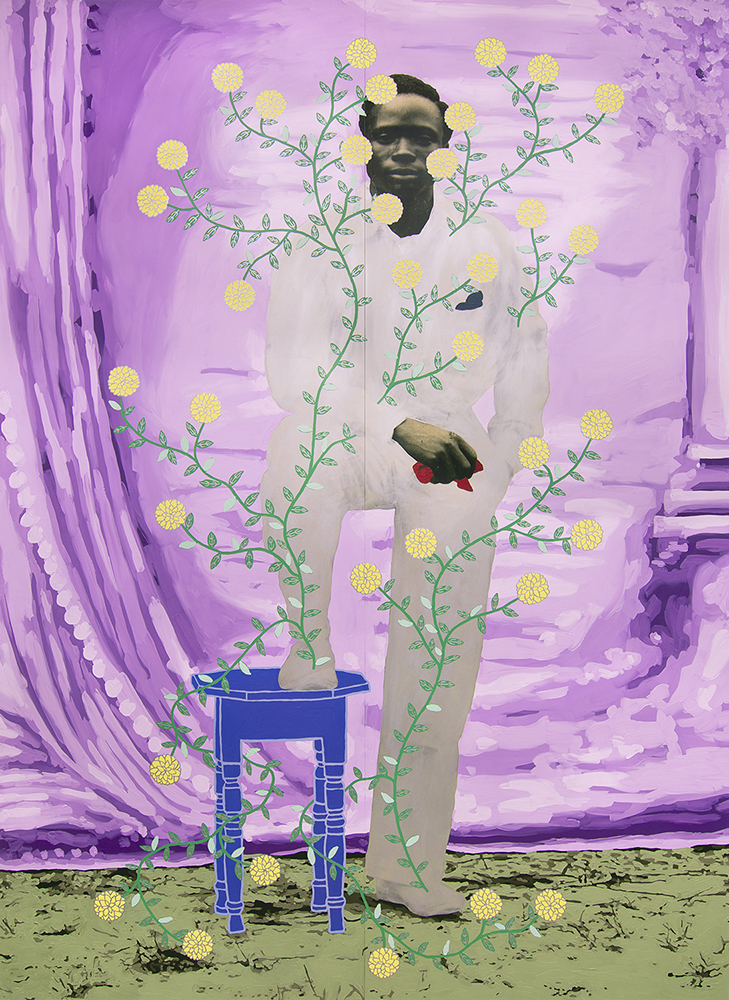 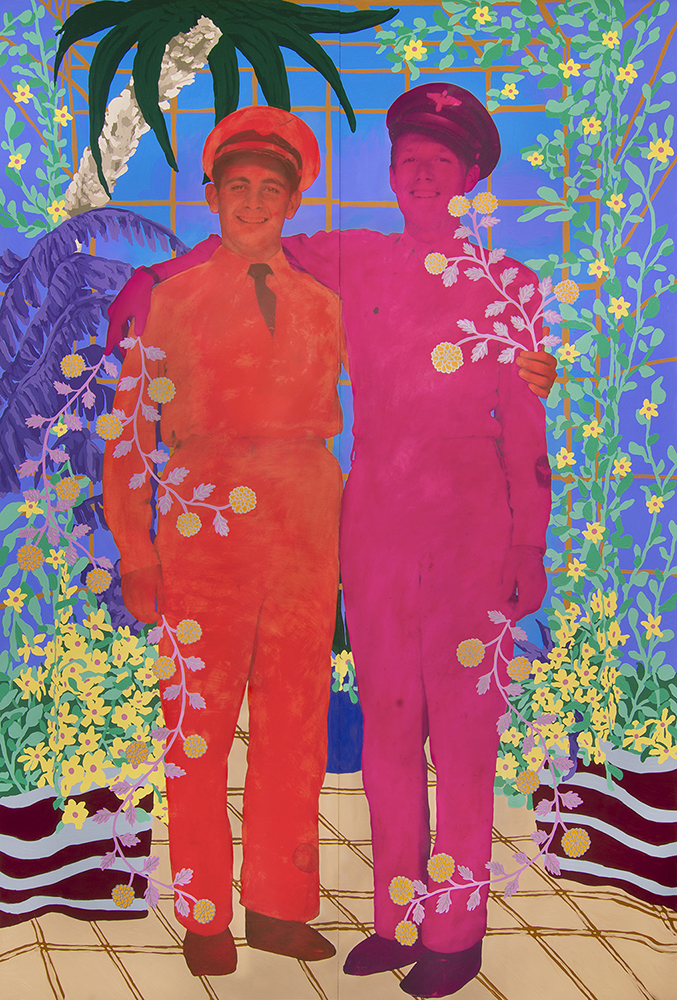 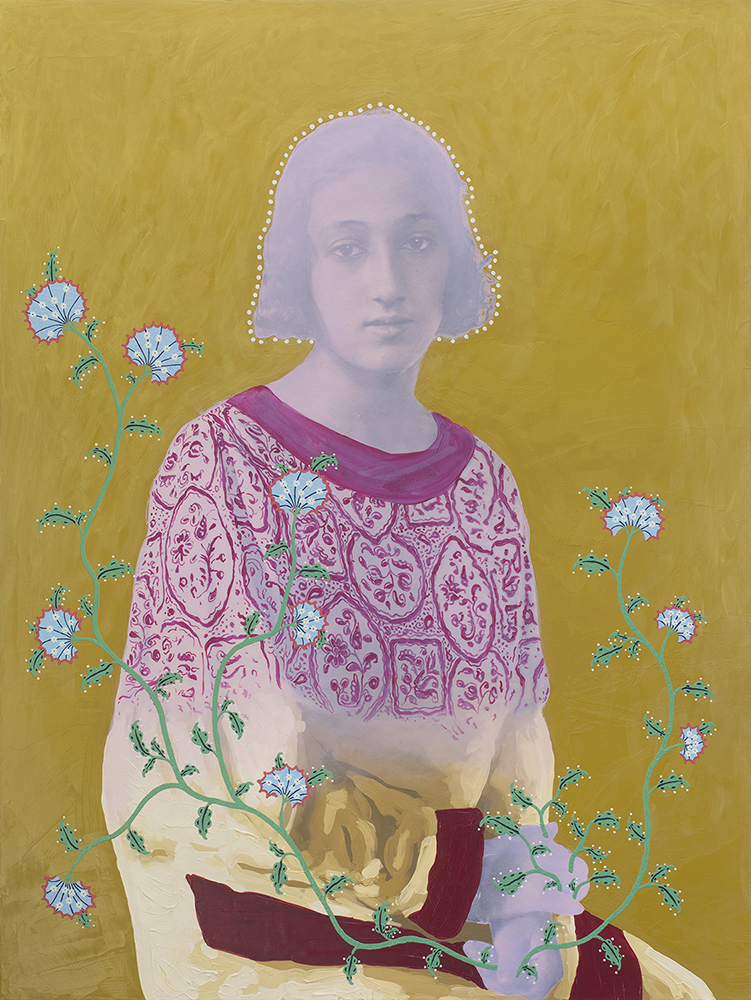 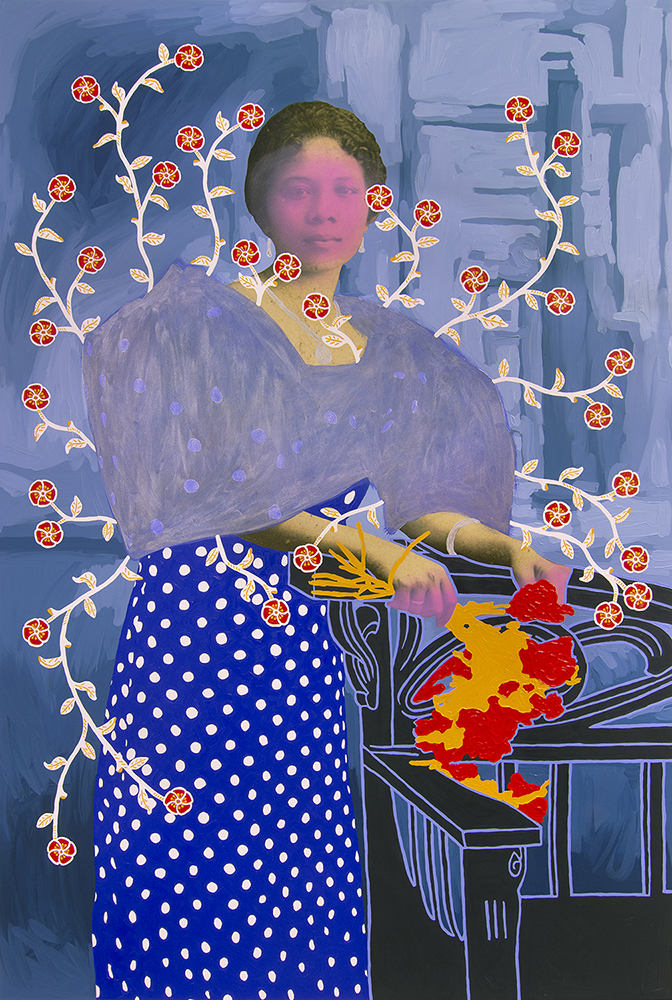 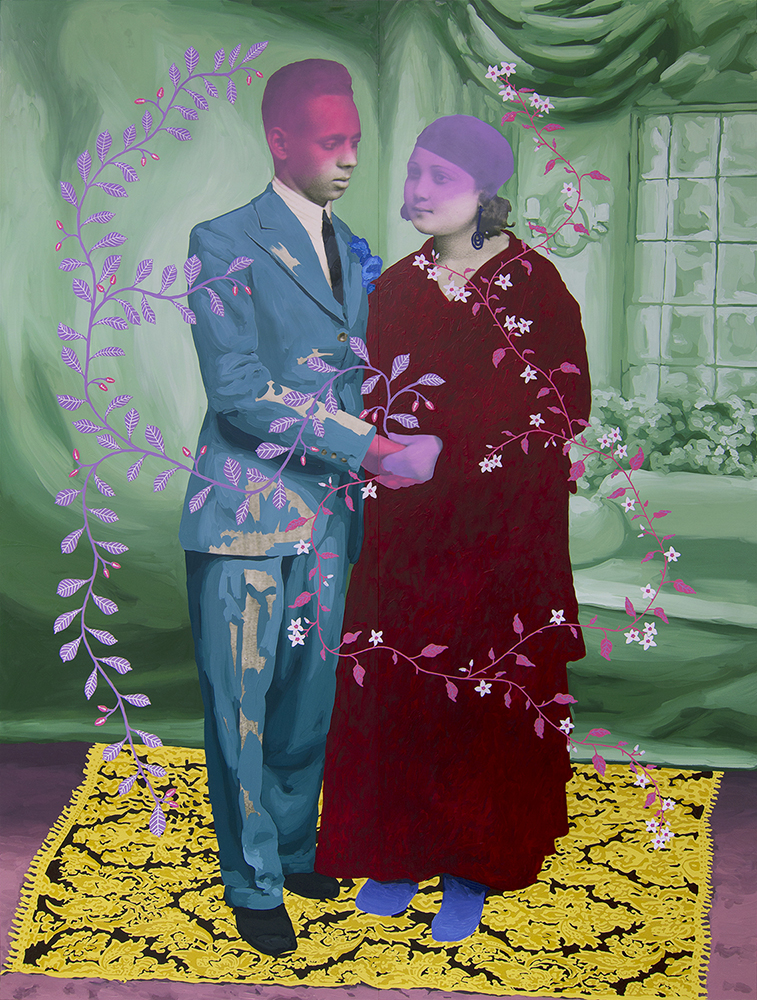 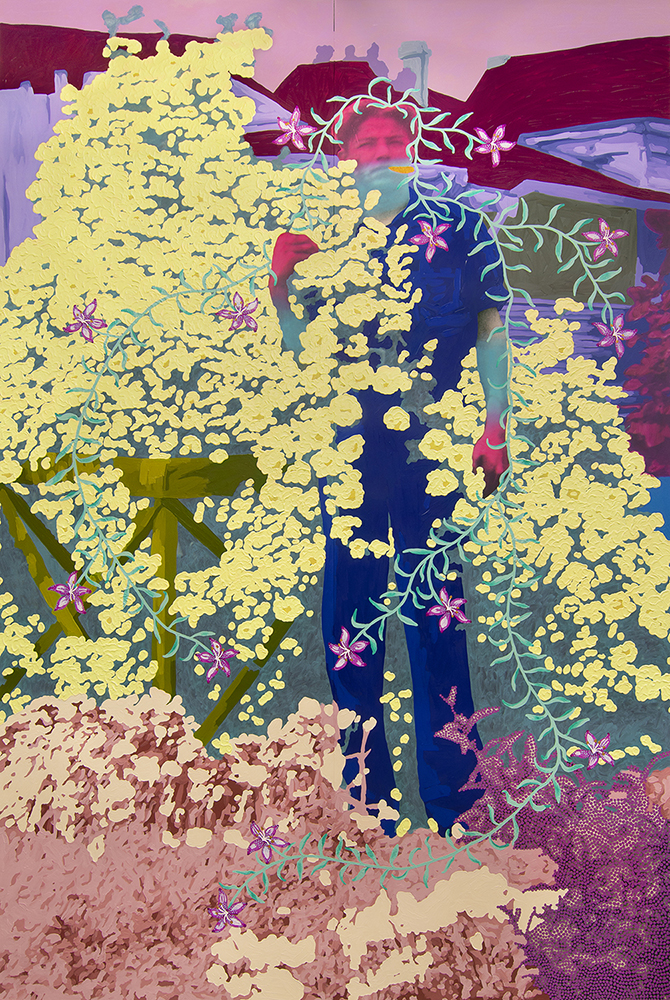 Daisy Patton is a multi-disciplinary artist who was born in Los Angeles, CA to a mother from the South and an Iranian father she never met. She spent her childhood between California and Oklahoma, deeply affected by these conflicting cultural ways of being. Influenced by collective and political history, as well as memory and the fallibility of the body, Patton’s work explores the meaning and social conventions of families, relationship, storytelling and story-carrying, and also connection. One prominent series, Forgetting is so long, has been featured in publications such as Hyperallergic, The Jealous Curator, The Denver Post, The Chautauquan Daily, and more.

Currently residing in western Massachusetts, Patton has a BFA in Studio Arts from the University of Oklahoma with minors in History and Art History and an Honors degree. She earned her MFA from The School of the Museum of Fine Arts, Boston/Tufts University, a multi-disciplinary program. Patton has completed artist residencies at Minerva Projects, Anderson Ranch, the Studios at MASS MoCA, RedLine Denver, and Eastside International in Los Angeles. She has been awarded the Barbara Deming Memorial Fund grant, as well as the Assets for Artists Massachusetts Matched Savings grant and the Montage Travel Award from SMFA for research in Dresden, Germany.

She has exhibited in solo and group shows nationally, including a museum solo at the CU Art Museum at the University of Colorado, the Chautauqua Institution, and Spring/Break NYC, among others. Her work is held in public and private collections such as the Denver Art Museum, Fidelity Investments Art Collection, and Delta Airlines. Minerva Projects Press has published Broken Time Machines: Daisy Patton, a book with essays and poetry on Patton’s practice spring 2021. K Contemporary represents Patton in Denver, CO, and J. Rinehart represents her in Seattle, WA.

NEXT | The 2021 Vernacular Photography Exhibition >
< Focus on Vernacular: The Anonymous Project | PREV