I love all photographs about the west.  My father was a cowboy and though I never lived in Arizona, my heart is on the range.  There are lots of photographers making work about cowboy culture and the American West, but none are as authentic as Jean Laughton who lives it on a daily basis.  In fact, it took Jean awhile to send me images as she was busy with calving season.  Her commitment to her work is evidenced in this image:

Riding Drag on the Brunsch Ranch
Jean grew up in rural Iowa and spent a lot of time on her grandmother’s farm. She moved to New York City and began taking photographs.  In 1997, she had an overwhelming urge to venture across the country in search of disappearing Americana.  She met cowboys and country western legends and fell in love with all things western. 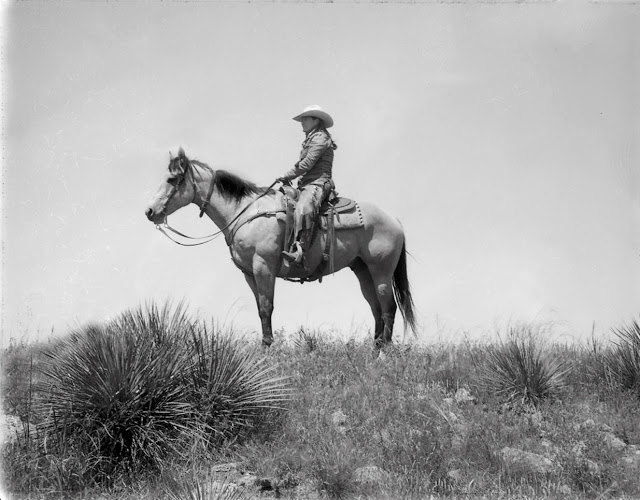 After several more trips over the years, Jean eventually bought property, cattle, and a whole new way of life in South Dakota. She has since learned to cowboy from scratch and has been ranching on Lyle O’Bryan’s Quarter Circle XL Ranch near Belvidere, South Dakota while documenting her My Ranching Life series from horseback. Jean now manages the ranch – riding and working alongside old time cowboy and mentor, Lyle O’Bryan (age 78) while continuing to document the intersection of her life with the past. 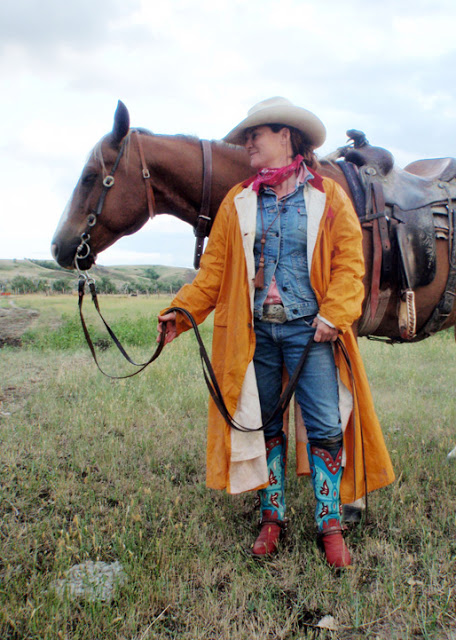 The two consistent things in her life have been her love of photography and the glorious West. Jean write a blog about her adventures on the range, My Ranching Life.
I am featuring work from two series, Go West and My Ranching Life.
Go West
I grew up in rural Iowa near the South Dakota border, on the edge of the West. When I began this series I was living in New York City. I was longing to GO WEST, back home and beyond, to photograph the people of a region that so captivated me – to escape back to reality and wide-open spaces – and travel across the vastness of the West on a journey that became not only a photographic one but also one of personal discovery – finding links between photo subjects and past family members, making friends with old bronc riders from my great grandmother’s days – mingling with the past while documenting the present as I looked to the future and the reinvention of my life. 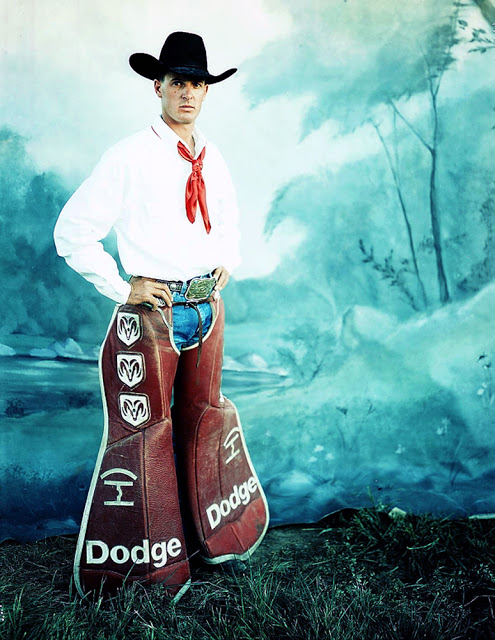 I didn’t watch many Westerns but the fabricated reality of a scene from John Ford’s ‘’My Darling Clementine” and so many from silent movies lit a spark. I wanted to head West and document real people in their western ‘costumes’ of sort. Pull them out of their current reality into a constructed one. So I left my then home of New York City, starting in 1995, for several summers and meandered about the West in my Bronco loaded with backdrops and my beat up $75 4×5 camera – stopping at selected rodeos and events. To me, this was like walking onto a movie studio back lot with characters straight out of Central Casting – but with the twist of naturally occurring authenticity. This was the beginning of several years of experiences that would eventually lead me to my current ten-year ranching adventure. What started as photographing the myth with this series lead to me actually inhabiting it with my current series MY RANCHING LIFE – stepping into a real life version of the backdrop scene and going beyond the role of spectator. 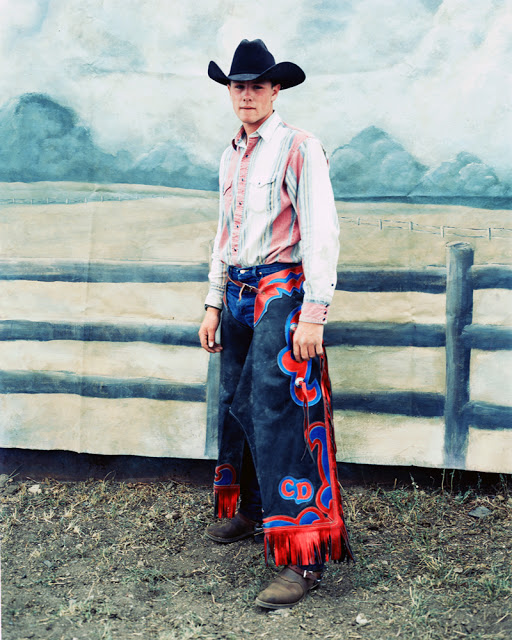 The GO WEST summers alone on the road were some of the best times – driving throughout the cinematic landscape of the West as an outsider with no ties, with a feeling of awe – watching a continuous ever changing ‘drive-in movie’ of the West through my windshield. They were such days of discovery for me. And the first time I actually stopped someone to ask to take their portrait. Watching me set up my backdrop in the wind behind the scenes of rodeos and go through the process of photographing each person with the 4×5 while talking at top speed was probably just as entertaining as the rodeo itself and I liken it to some sort of Buster Keaton silent movie scene from The Cameraman.  I mostly did one shot of the people I met in Nebraska, South Dakota, Wyoming, Colorado and Montana. 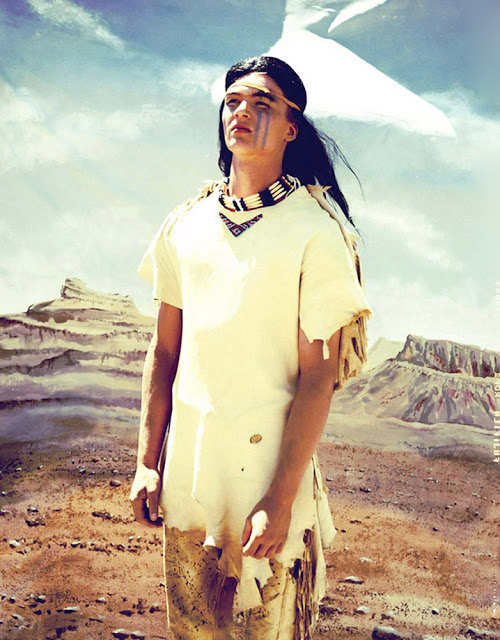 When I asked each person to step in front of my backdrop, it transformed into a miniature movie set and they became the leading actor from the countless legends of the true and imagined West of the past. Their look, stance or clothing evoked many a character from many a movie scene and made me aware of movie characters based on real life and real life based on movie characters and the blur between the two. I shot most of the B&W images from this series with the beloved Type 55 Polaroid film – which allowed for a endless array of accidental blemishes and ‘instant’ timelessness. 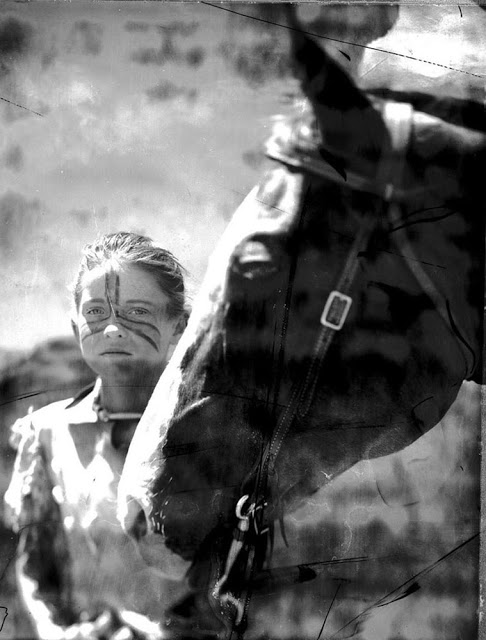 What started my thousands of miles driving throughout the West was a personal photography project that eventually morphed into me searching for something. As with many from the past, I headed West to transform my life – moving to the tiny Last Picture Show back lot of a movie set Badlands town of Interior, South Dakota and stepping into my current cowboying role. 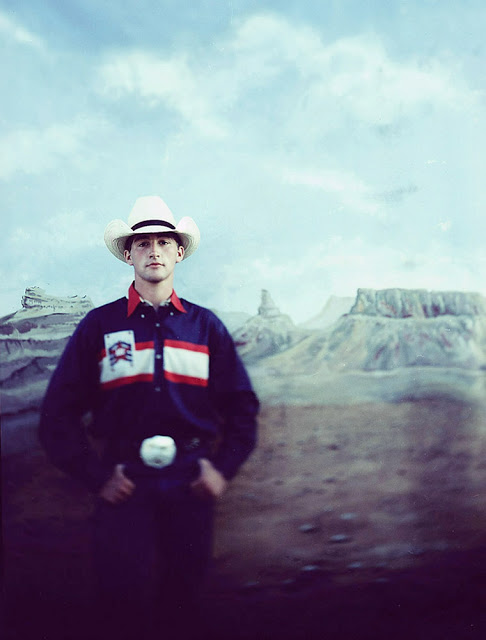 I have GONE WEST. 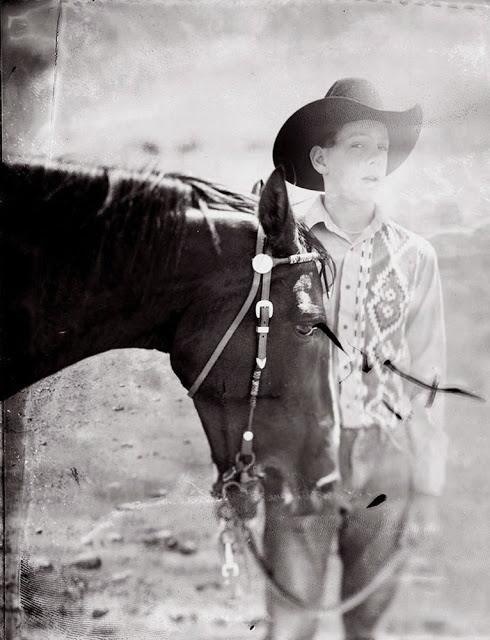 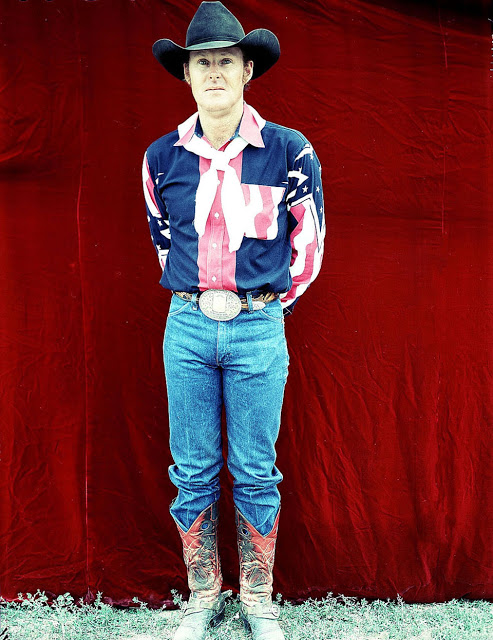 My Ranching Life
I have always used my photography as a tool for attempting time travel. And working on the Quarter Circle XL Ranch is a bit like stepping back in time onto a Western movie backlot. The ranch was once home to Earl Thode – first world champion bronc rider of 1929 and his family. It is quite a thrill riding across the same land and the same White River as the cowboys from the past. I feel as if I have stepped ‘inside the photograph’ – riding my Pony around and photographing in a diorama of the West somewhere between the past and present – between reality and fantasy.

The area of ranches south of Belvidere, South Dakota is rich with western heritage – with all cattle work done on horseback. Creating quite the historical visual against the backdrop of the land and cyclorama sky. I photograph these scenes from horseback, while cowboying, with a Noblex 120 swing lens panoramic camera I carry in my saddlebags. The Noblex gives me a medium format negative suitable for large-scale printing. The panoramic format lends a cinematic quality while also conveying the vastness of the landscape. And the black & white film helps reverse time. My horse’s ears intentionally appear in some of the photographs – announcing my presence as part of the crew.

These photographs are a visual diary of what appear to be ‘film stills’ of some of the many scenarios I have been a part of while learning to cowboy and eventually taking over managing the Quarter Circle XL Ranch. I have had the pleasure of working alongside a crew of rugged hardworking cowboys on the ten area ranches we ‘neighbor’ with. This allows me to learn a lot, cover many miles of pasture on horseback and document within a variety of landscapes. Offering an insider’s perspective of the beauty and timelessness of present day family ranching. With photographs that, at first glance, could have been taken during another era – depicting a profession that has changed little over the past century. The land, as backdrop, has a permanence all its own but the cast of characters are bound to change. I am proud to be a part of it all.

I continue to ranch and photograph and am ever grateful to Lyle O’Bryan for being my cowboy mentor. These are the years of my life I will never forget. It has been quite the adventure so far.

NEXT | Carl Corey: For Love and Money >
< Open to Interpretation | PREV