Flowering in Photography by Barbara Ciurej and Lindsay LochmanMay 23, 2022 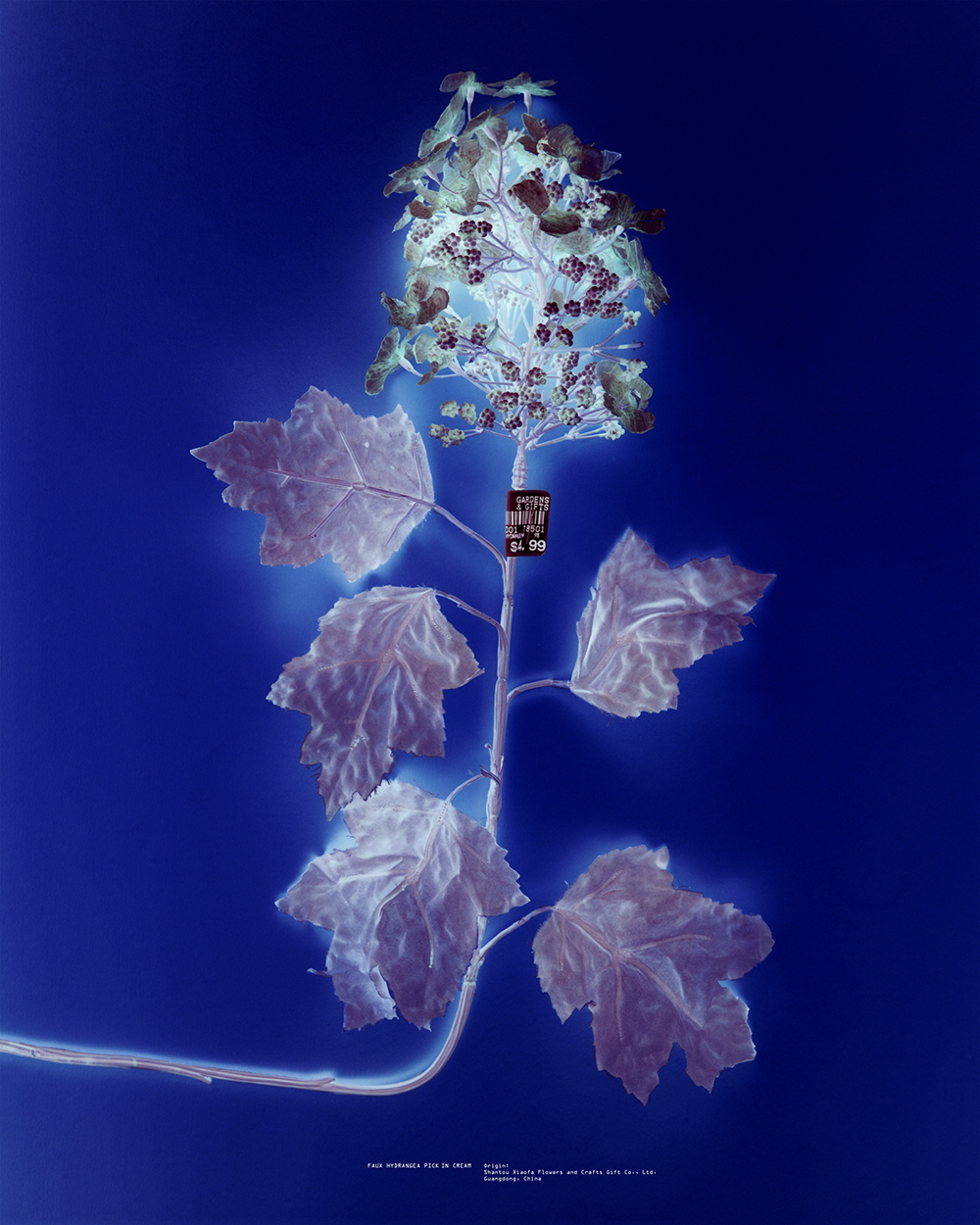 This week we feature photographers who are reinvigorating the language of flowers. The luxuriance of floral abundance remains a powerful carrier of meaning. We still turn to flowers when we celebrate love, comfort the sick, commemorate achievements, bury our dead. The photographers we will present over the next five days, reframe flowers’ role in interconnected cultural, economic, and historic narratives. Their projects suggest a careful consideration of what whole systems include.

As introduction to our Flowering week, we share a few of artists and ideas that have informed and inspired us over the years. After using flowers as components in a number of our own images, we began to study them as the principle characters in an evolving narrative.

While working with cyanotypes, we had the privilege to study one of Anna Atkins’ (1790-1871) books of botanical illustration. Her studies, adhering to the scientific criteria of her day, possessed startling botanical accuracy. Aesthetically, their delicacy and precision are magical. 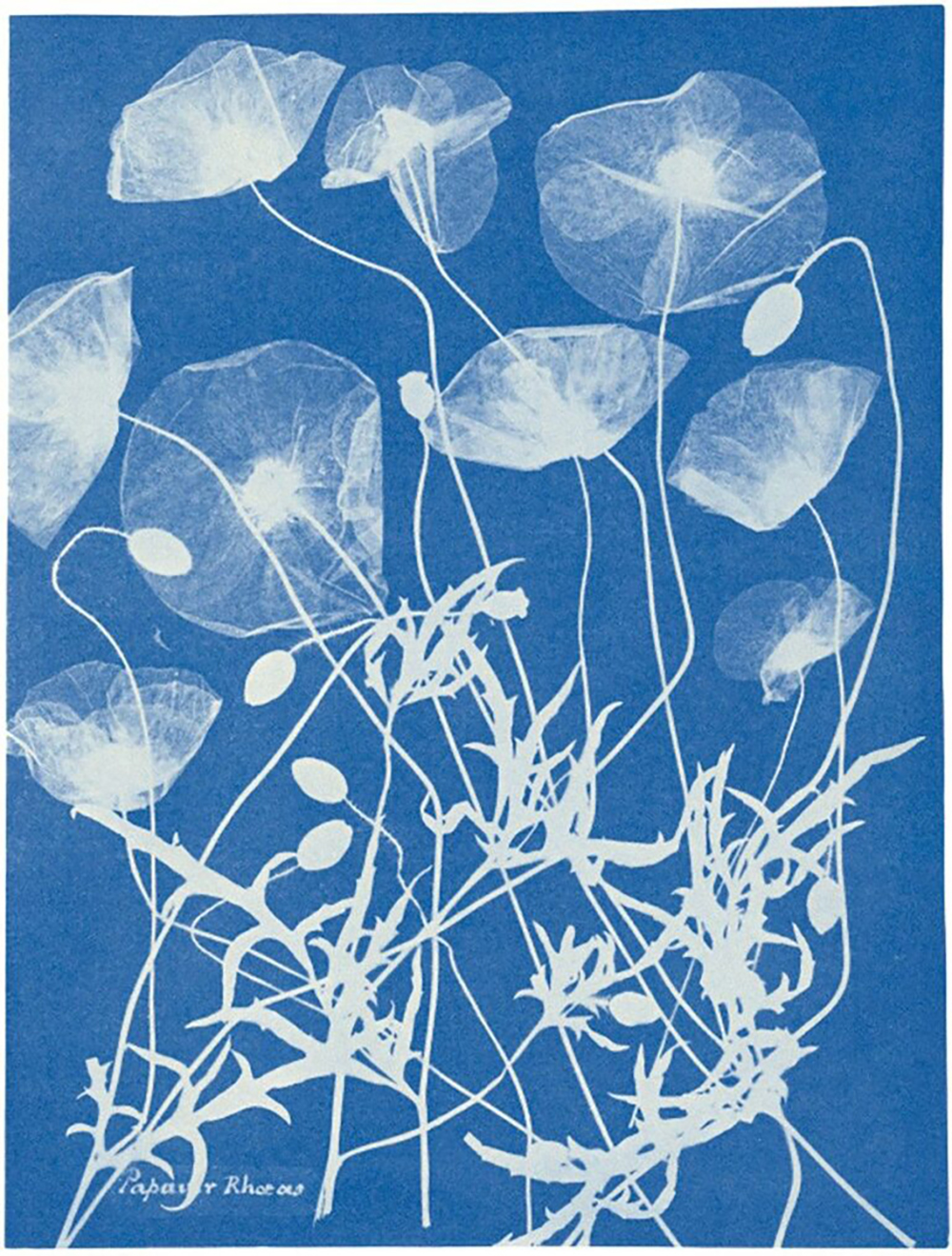 Since the medium’s beginnings, photographers have explored flowers’ expressive potential. Their interpretations expressed and responded to the zeitgeist of each era. As photographic storytellers, we were enlightened by the intense floral imagery Julia Margaret Cameron (1815-1879) used to evoke symbolic meaning in her allegorical Victorian narratives. 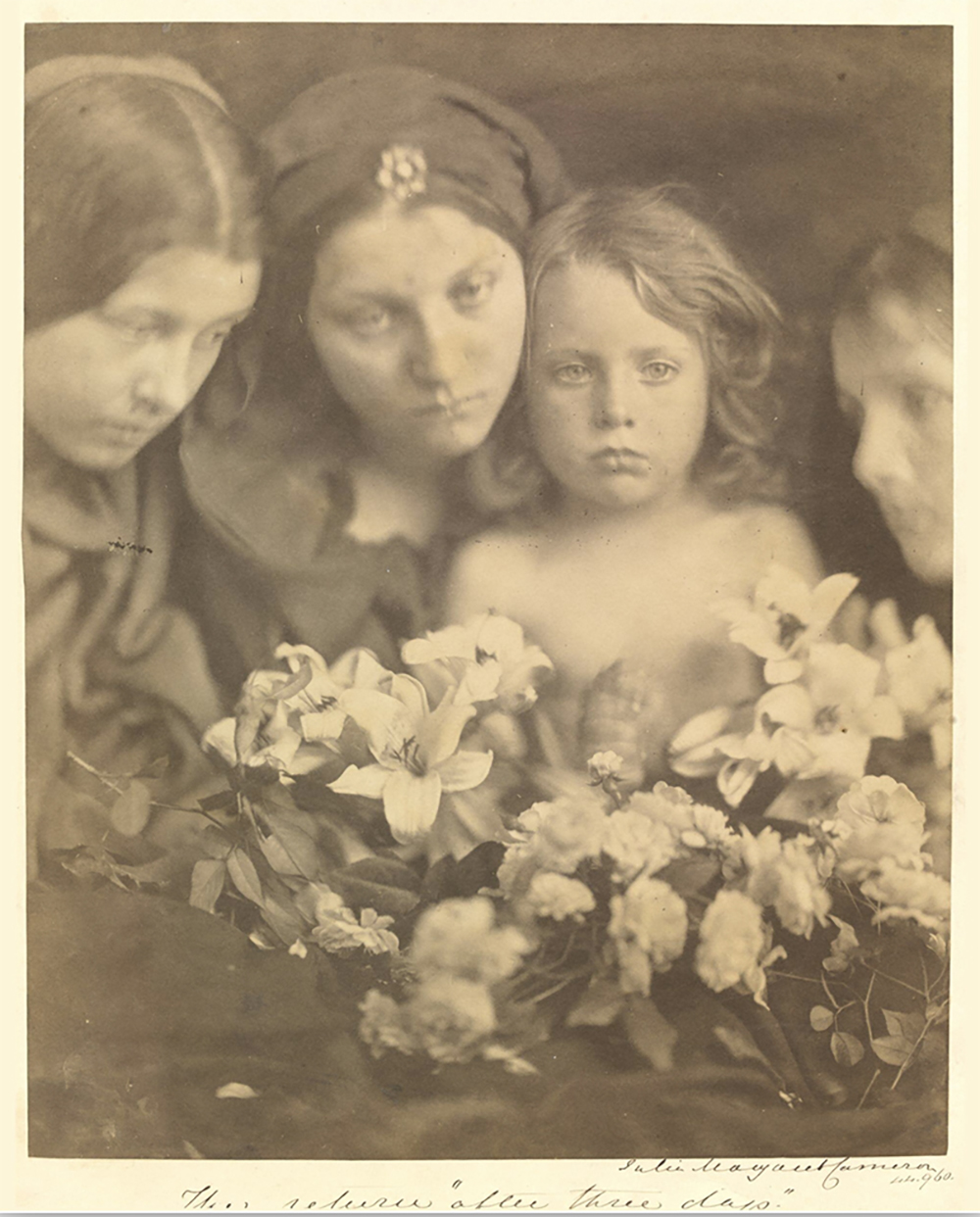 When we began our practice, we benefited from Modernism’s relentless explorations into visual abstraction, experimentation with form, innovative techniques, as well as social reconstruction and psychology. We saw the vast and nuanced hold these variations created in our culture and on the photographic interpretation of flowers.

Karl Blossfeldt (1865-1932), a pioneer of botanical photography, specialized in macrophotography, transforming common flowers into architectonic, rhythmic forms. We extrapolated from his images, ideas of structures with inherent patterns of growth as we photographed vernacular architecture. Aesthetically, Blossfeldt’s depictions warped time and space reminds us of the tension between the eternal and the ephemeral. 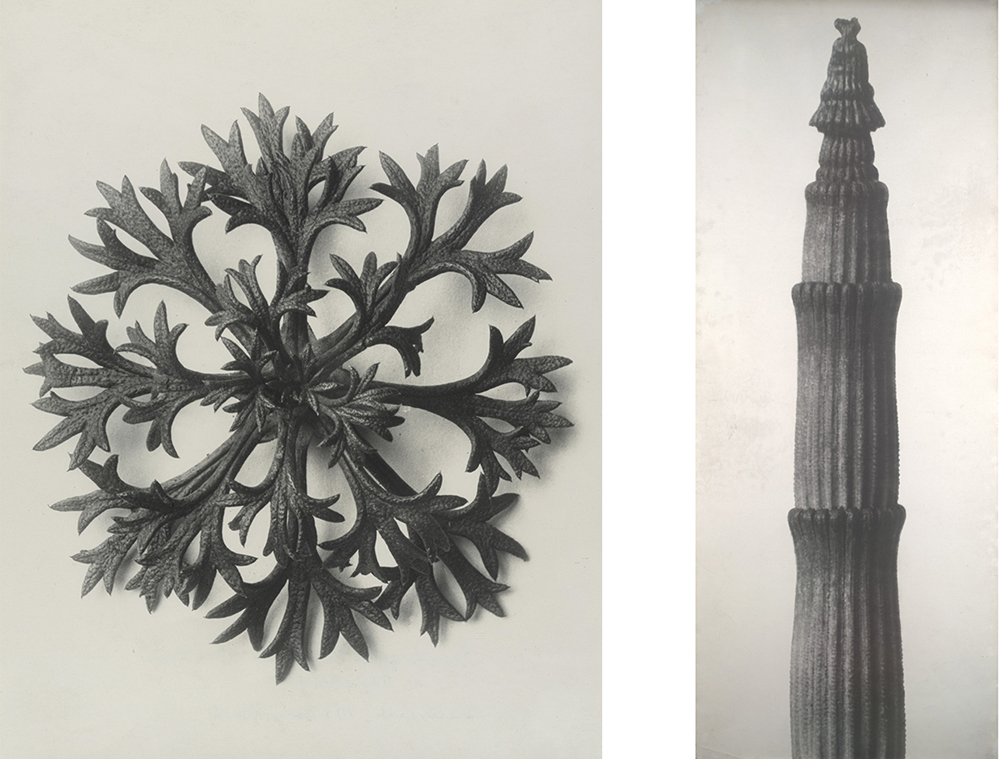 Gardeners since childhood as well as photographers with children, we appreciate Imogene Cunningham (1883-1975) meditative vision. After studying both chemistry and botany, Cunningham became a founding member of both the F 64 group of Pictorialist photographers (1932) and the California Horticultural Society in (1933). She admitted one influence on her choice of photographing botanical forms was that it could be done while shepherding her children through the garden. Using Modernist composition and natural light, Cunningham reveals delicate power throughout her decade of flower photography. 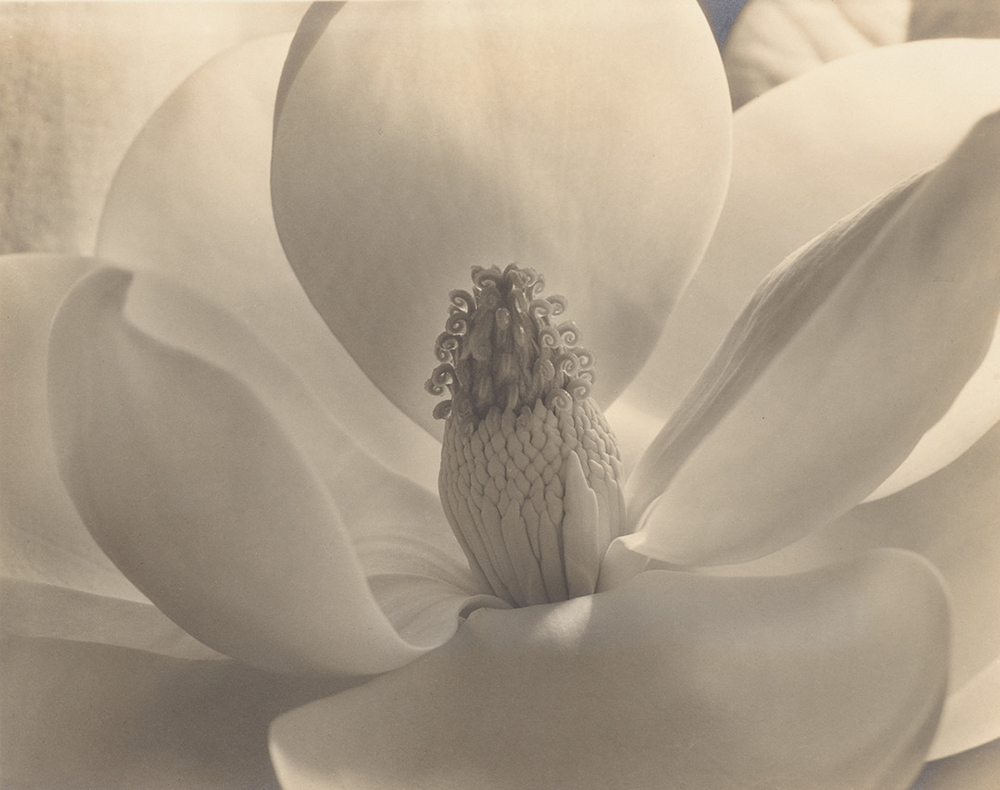 As we came of age, the distinction between fine art and fashion photography had ruptured. Irving Penn (1917-2009) made everything look elegant. Known for his technique of removing objects and models from contextual space, he began a years-long study of flowers in 1967. Educated in the tradition of 17th century Dutch still-life painting, he photographed flowers as grandiloquent form, removing them from any context. With this technique he expressed their natural elegance in contrast with the artifice and deception of the fashion world. 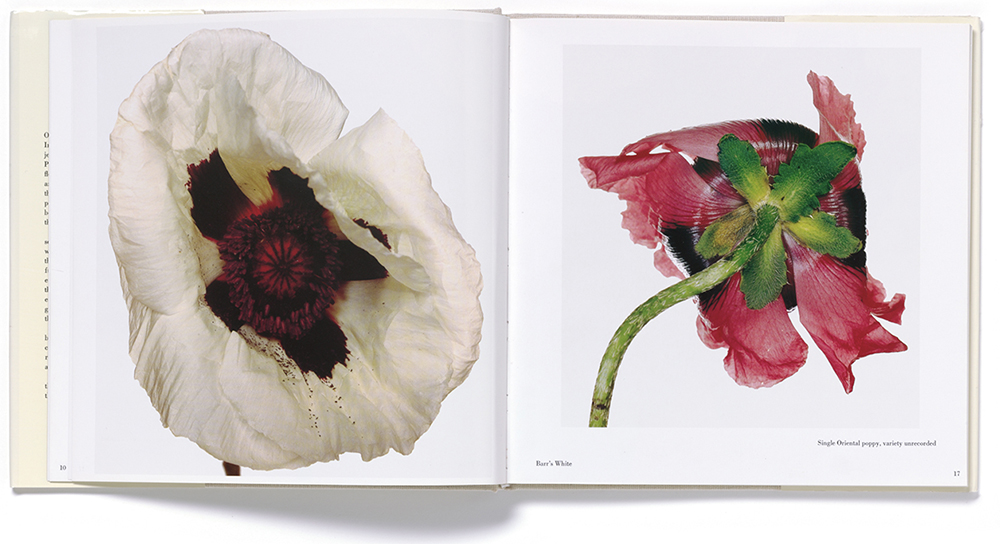 Individual floral species, through their appearance or habitat, have been used as powerful social symbols. Once an association is made, a photograph including that specific flower becomes an historical commemorative, social or political statement.

Our fathers were both WWII veterans, so seeing the poppy pinned on a lapel reminded us of something unpleasant about war. Now, few people know that University of Georgia professor, Moina Michael began her 1924 campaign selling poppy flowers on behalf of soldiers killed on the poppy fields of Flanders, France in World War I. Five wars have come and gone since the red poppy became a nationally recognized symbol of military sacrifice as we consider that flower on National Poppy Day, May 27, 2022. 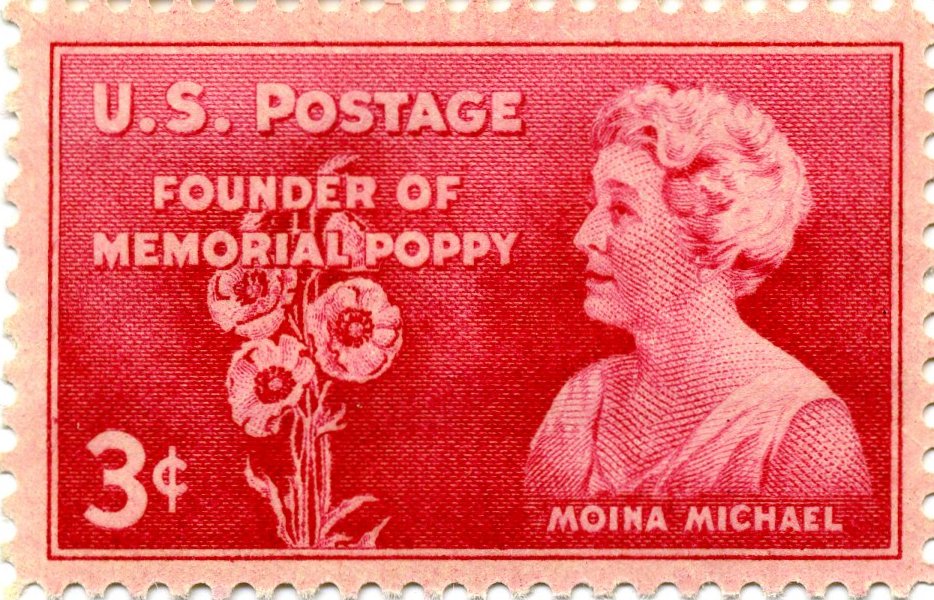 A Yellow Rose Project is a photographic collaboration of responses, reflections, and reactions to the 19th Amendment from over one hundred women across the United States. August 18, 2020, marked the centennial of the 19th Amendment. It was on that day, 100 years ago, women wearing yellow roses stood shoulder to shoulder in Tennessee awaiting the roll call of men that would cast their votes for or against a woman’s right to a voice in government. In light of current events, we wonder what flower we will need to counter the backlash on women’s rights. 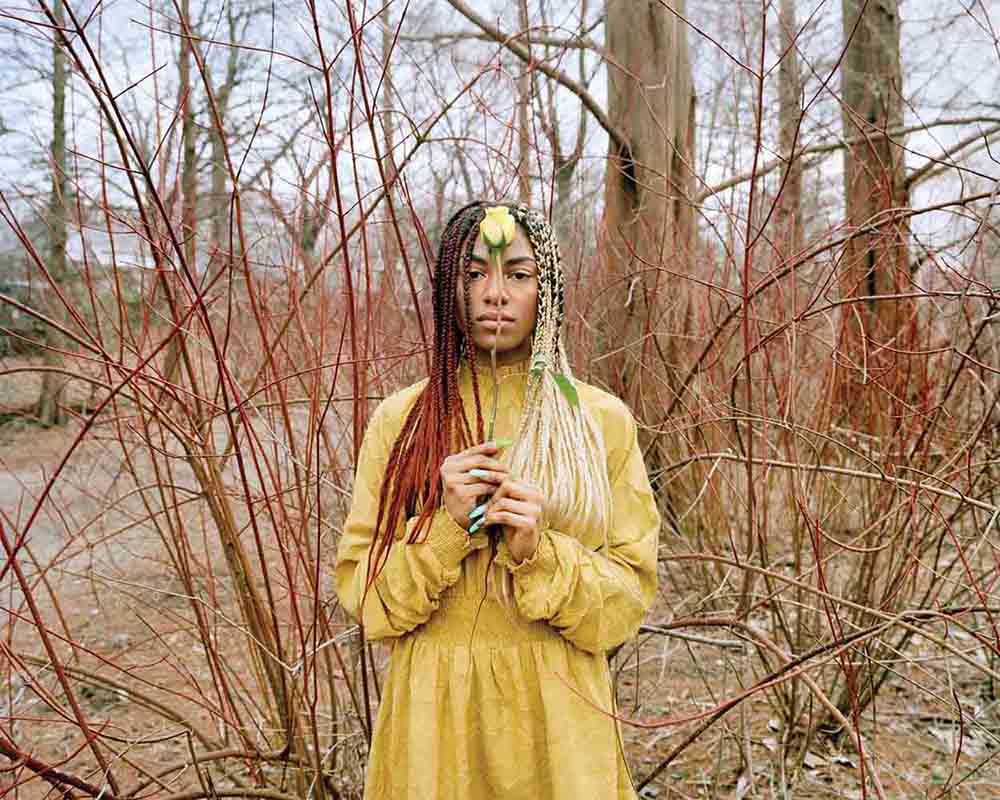 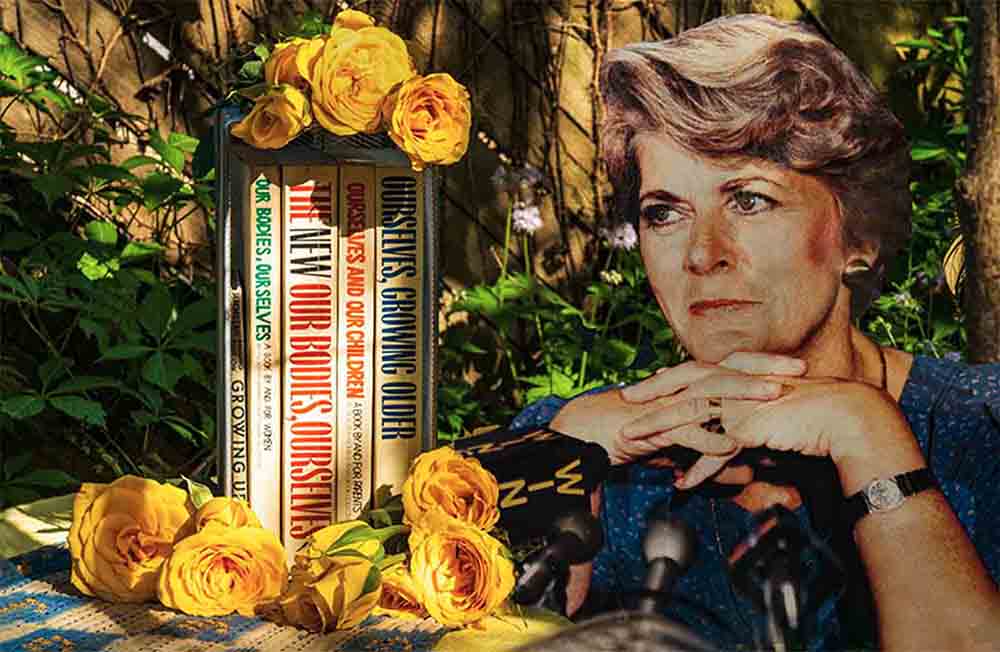 © Yvette Meltzer, Geraldine Ferraro, the first female Vice-Presidential Candidate on a national party ticket in 1984 is pictured in a garden with Copies of the “Our Bodies….” books.

A flower-based social justice project has emerged during the pandemic. Paul Harfleet has created The Pansy Project as a gesture of recognition where pansies are planted at sites of homophobic abuse. The flower is then documented in its location and the image entitled after the abuse. The project reveals a frequent reality of LGBTQ+ experience, which often goes unreported to authorities. 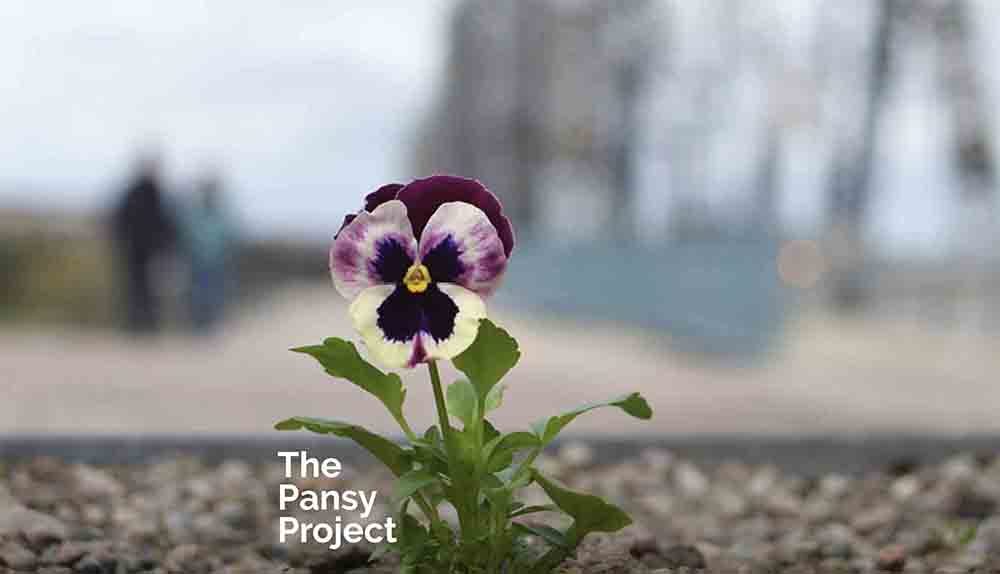 Our senses are conditioned to respond to the colors, forms and transience of flowers. They have the ability to attract our attention as visual symbols, but the meaning of flowers in popular culture proves ephemeral. The current discourse in contemporary photography revives these symbols, adding nuanced layers.

Consider the associations with celebrities. Billie Holiday — performer, civil rights figure, and symbol of black elegance, disguised an unfortunate hair malfunction before a performance with a halo of gardenias. She and the gardenias remain poetically entwined as symbols of the flowering of Black culture during the Harlem Renaissance. 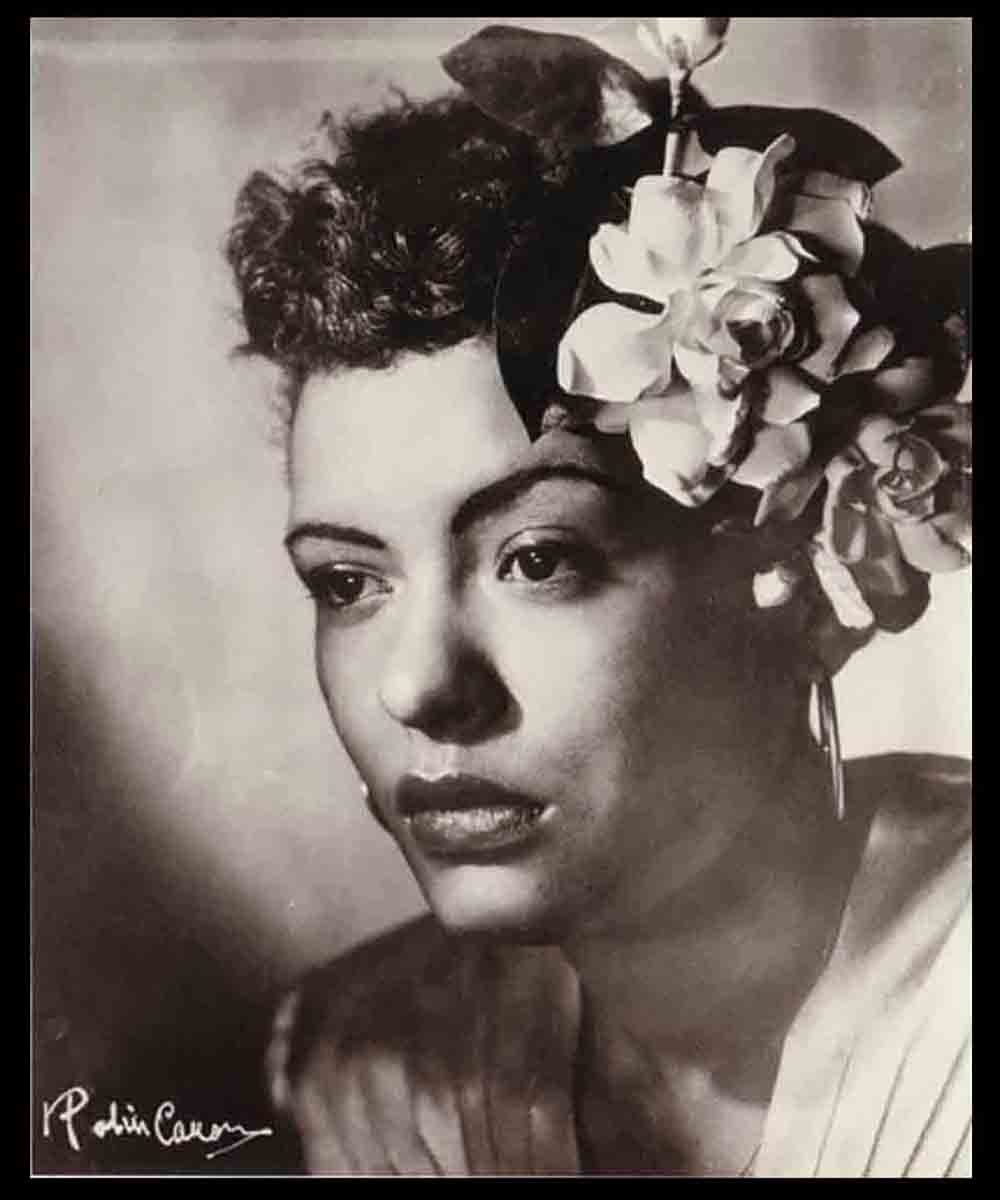 Carmen Miranda consciously appropriated the provocative, theatrical accessories of her native Brazil, but during the passage of a few decades, she has become a caricature of colonialist exoticism. 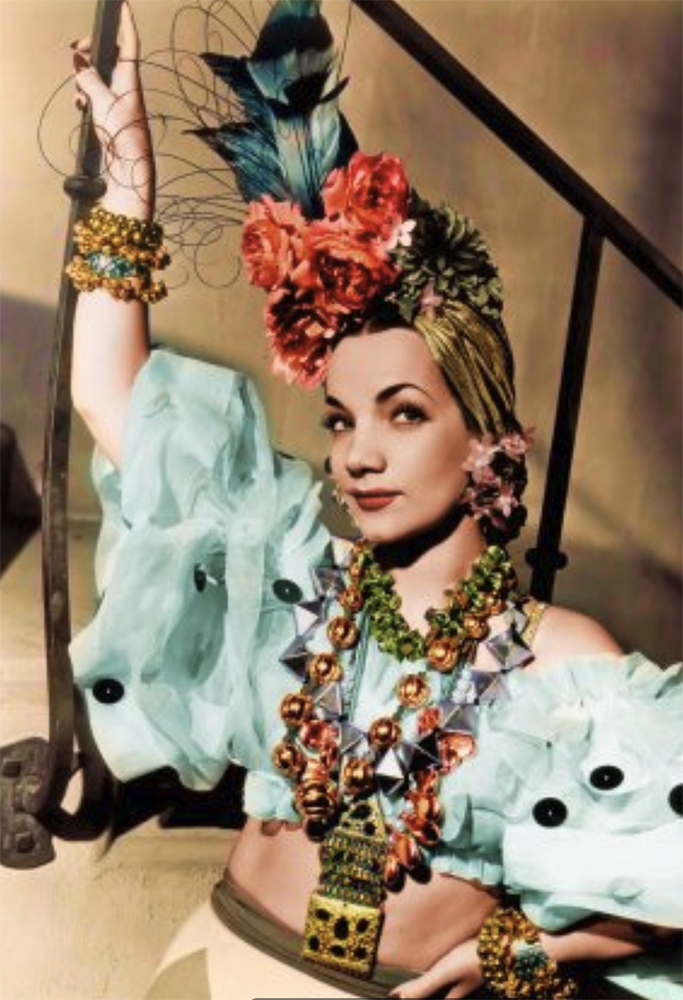 The flowering world contains myriad sexual variants. Most plants sprout bisexual flowers which have both male and female parts, but some plants grow separate male and female flowers; while others have both bisexual and single-sex flowers. In the realm of human sexuality, flowers have been a subject of contention and celebration.

First exhibited in l977, Robert Mapplethorpe’s (1946-1989) flower photographs, were viewed as suggestive of homo-erotic sexuality. We experienced the important political implication that made his work a lightning rod for the contentious debates on public funding for the visual arts during the 1980s that would ultimately decimate the federal government’s support for artists. 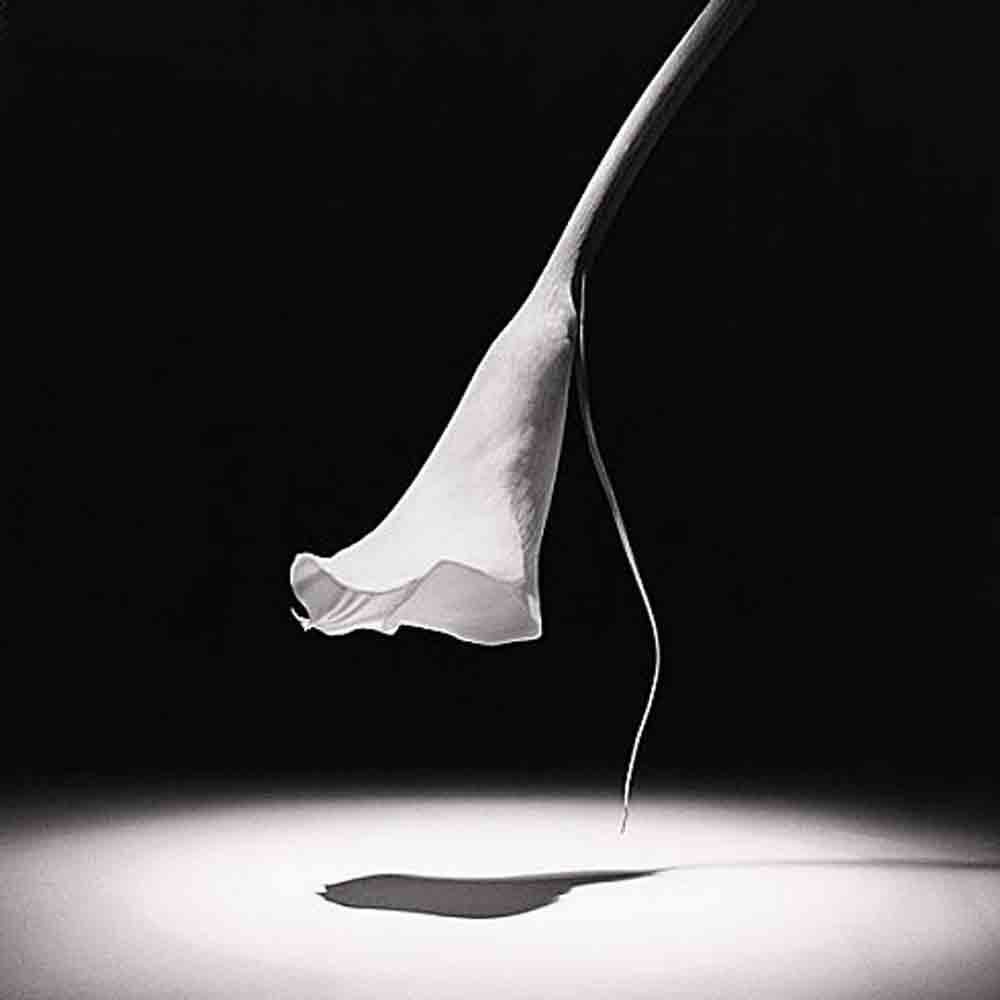 Mona Kuhn’s project, Bushes & Succulents, delights in bringing solarized female forms and close up succulents into dialogue for contemplation and celebration. “My intention is not to objectify the body, but to celebrate the female body and it’s essence.” Of her photographs of succulents,“aside from being suggestive, the botanical close-ups of “succulents” are marvelous to gaze upon,” says Kuhn “you enter a realm of visual pleasure and wonder.” 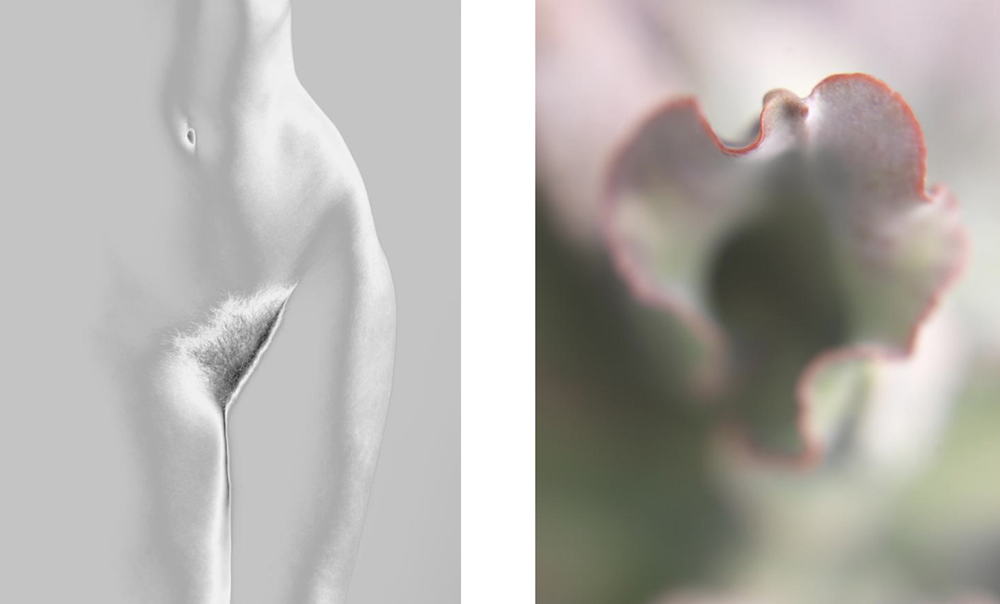 We invite you to view the work of more photographers with pleasure and wonder, and suggest:

Flora Photographica: Masterpieces of Flower Photography from 1835 to the Present , William Ewing, 2002. An album of flower photography that celebrates the glorious beauty and pathos of flowers in all their multifarious forms.

Collaborators Barbara Ciurej and Lindsay Lochman explore the confluence of history, myth and popular culture in their photographic narratives.