British photographer, Lottie Davies, seems to do it all and do it well. She’s an editorial photographer for newspapers, magazines, books and advertising; she’s a photo journalist focusing on lesser-known communities and on ethno-political issues, putting forward a sharply critical view of contemporary Western complacency, with a desire to illuminate the lives of those often overlooked. Her fine art photography is concerned with stories and personal histories, the tales and myths we use to structure our lives: memories, life-stories, beliefs. She takes inspiration from classical and modern painting, cinema and theatre as well as the imaginary worlds of literature.

My project ‘Memories and Nightmares’ is concerned with making images inspired by narratives of individual experiences, both real and fictional. At the beginning of 2008 I asked several of my friends to send me written accounts of early childhood memories or nightmares and have discovered a rich vein of fascinating stories.

We all have our own tales and myths which we use to tell our lives. In many ways, memories are an essentially human experience, and over the years they can change; for instance, an early childhood memory will be retold and re-remembered, and the way one person describes an event may be different to others’ memory of it. In recounting nightmares, some people remember a clear narrative, others only a particular feeling or location. And of course the surreal or impossible elements of the dream, which at the time of dreaming seem entirely logical, are often the most fascinating. Our memories are part of the collection of human stories, and by using them as inspiration for these images I hope to celebrate them and encourage us to tell us more about ourselves. 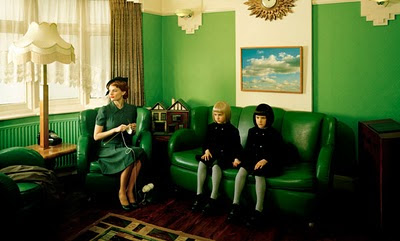 Viola As Twins
It’s a very sunny, positive atmosphere. Viola (my three year old) runs up to me with her arms open wide, calling “mummy, mummy”, a big smile across her face. As she gets closer another Viola coming from behind her does exactly the same thing. The whole atmosphere shifts, turning the dream into a nightmare. I’m left speechless, wondering who the second girl is and, by the same token, if the first one is really my little girl at all.

Another, very brief dream; Viola’s there again, happy and smiling. She’s blonde with blue eyes (in real life and in the dream). Then suddenly another little girl appears. In the dream I know her to be Viola too, but this second girl is dark, with green eyes, also very pretty. They both behave like I’m their mummy but don’t seem to notice one another. I feel like something’s wrong, then I realize I can’t remember having had twins. I don’t know who my daughter is. 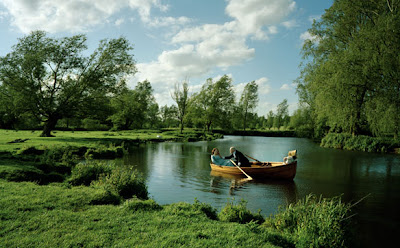 The River
England is still pagan, but the priests and their armies are arriving from overseas to forcibly convert the population to Christianity. I’m a priestess and, whereas everyone else submits to conversion to protect themselves – while secretly holding to the old beliefs – I can’t. The priests crucify me.

Later in the dream, I’m being taken in a boat by the chief priest down a river, sleepy, medium flowing, smooth water, with overhanging trees. It’s not raining or sunny, a greyish day. My daughter is with me – she’s about 9. (It’s the first time I ever have a child in a dream). The priest, now away from public gaze, is groping me and I submit (the narratorial sense of the dream enjoys the irony of the celibate, church militant, man of god groping a woman as soon as he gets a chance).

Before I was killed, my daughter was left with her secret, real, non-Christian name which she mustn’t use any more but mustn’t forget. As she floats down the river near the bank, trailing her hand in the water, she reaches up under an overhanging bit of vegetation. There’s an old brick wall or stony bank and she finds the hidden carving of her mother crucified – she looks at it, tracing the marking with her hand – it’s one of our religion’s secret places. People have submitted to Christianity, but won’t forget their true beliefs. I die in this dream and later I’m both alive and have already died.

The Girl and the Tower
My most memorable nightmare is an old one. I think I was 10-11 or something. My parents were divorced, and I missed my dad a lot. I was told that I had to kill a girl, whom I didn’t know, or they (someone) would kill my dad. I took a big knife and started to climb the stairs of a very high, round, old tower. It had stonewalls and it was dark and a bit wet inside. It took a long time to climb, every step was so hard. On the top was a wooden door, which I opened and went inside a room. There was a bed there and the girl was sleeping in it. I sitting or standing over her and raised the knife over my head. Just when I moved the knife towards her chest with great force, I realised that the girl was me. I couldn’t stop the movement. I woke up just when the knife touched my chest. My mum came running, because I had screamed very loud… I cried for hours, because the feeling was really awful. And I can still feel it, so when I now write about it, I almost start crying again.

The Day My Brother Was Born
One of my earliest memories is from the day my brother was born, 14th December 1973. I am running down a corridor in a hospital, and to my right I can see a playroom with a dapple-grey rocking horse in the far corner. Usually I’d have gone straight in because the rocking horse was my dream toy, but I carried on running, thinking “I’ll go back and play later”. My mother remembers hearing me shout at the top of my voice as I was running; “I’m going to see my mummy!”

The Frozen Lake
About 1944/45. Being taken skating on ice, sitting in a chair on ice skates, whizzing round a frozen lake. In Simla, northern India. Hearing about a man whose face had been torn off by a bear. About same date and place. Sewing my embroidery onto a sofa arm. In Jhelum, a bit later.

The Red Devil
I’ll borrow Scarlett’s red devil. She said she could see it in the corner of the room, it was scary but never harmed her. The Indian dreamcatcher nets were essential for safe sleeping.

Sophie in Florida
My first memory is when friends of my parents gave me and Katherine nighties which said ‘I Don’t Want To Go To Bed’ in punky ‘cool’ graffitti writing on the front. Mine was pale pink. This being the 80s, they were 100% polyester and the memory I have is discovering that if you rubbed the fabric against itself under the duvet, it made sparks which you could see in the dark. Another memory of this nightie I have is walking around the neighbourhood in Florida where we were on holiday on Christmas Eve in the dark, with my parents, looking at all the Christmas trees and the lights. This was a huge treat – both being outside in the dark and wearing your night-clothes! 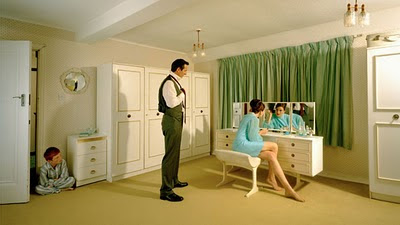 The Blue Bedroom
I remember my bedroom when I was about – who knows, 3 or 4 – and early in the morning when it was still half light I could see my dad getting his ties out of the closet in the hall. I would watch him in silence through the crack in the door as he got ready for work.

Quints
Bizarre nightmare: Had so many so I’ll give the one I had two nights ago… I was pregnant with quintuplets, and this was scary as I didn’t want any more kids (having a 10 and 13 year old already and I am 42 so too old, and not physically strong enough either), and I had to convince my midwife (who has retired) to be with me throughout the pregnancy and birth, as she had been with my other kids. Then when the quintuplets were born I was worried about the size of vehicle we now needed, as most people carriers are for 7 and we needed room for 8. How was I going to park that in London as easily as the small car we had already?! I wasn’t able to pursue my career, and my husband had to give up his music career to help care for the babies. So, would our relationship suffer? How would our 10 and 13 year old cope? Where would the finance come from? Would they have to become show babies like the French-Canadians in the 1950’s (I think) who had the state looking after their septruplets), and the mother had restricted access to her babies? I then woke up, rather bemused!

NEXT | MIGRATION, Lost and Found in America >
< René Clement | PREV