I am already exhausted just reading through what is about to happen in New York this fall. The tireless and outside-the-box new wave curators/gallerists/artists, Charlie Grosso and Kesha Bruce of Baang + Burne Contemporary have created a non-stop event of six weekly exhibitions, or 6×6 starting tonight, September 8th, and running through October 18th. Their guerilla style exhibition schedule is high-octane fuel for the art lover. In addition to the 6 planned exhibits, they are taping into the cultural veins of New York to mix blood with Interior design, décor, and architecture professionals, chefs, wine aficiandos, and other independent curators. It’s art on a rock concert scale and it’s going to get loud!

Baang and Burne Contemporary was created with one singular purpose in mind–removing the intimidation factor from the art buying experience and replacing it with real excitement. Charlie and Kesha are fearless in their attempts to celebrate art and photography and believe that everyone is a potential collector. They had a successful funding experience through Kickstarter that will push their agenda further and this Fall, present an art festival in the center of the art world, New York City. 6×6 is 6 back-to-back, 1-week-only art exhibits featuring a line-up of 12 international artists. In addition to the exhibits, there is also tons of exciting programming during the 6 weeks, including the brilliant 6×6 summer blog tour to help promote the events. 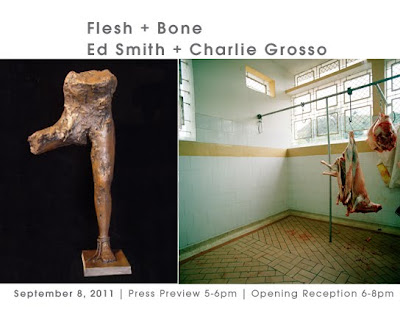 Two Artists Ask the Question: What Makes Us Human?
What does it mean to be made of flesh and bone? What is the true nature of the human animal? In the inaugural exhibition of Baang and Burne Contemporary’s six-week art event, appropriately titled 6×6, artists Ed Smith and Charlie Grosso tackle these questions head on, while using radically different mediums and approaches.

Both artists have enjoyed successful careers documenting the visceral and fleshy boundaries of humanity. In their exhibition, Flesh and Bone, Smith’s large-scale bronze sculptures and Grosso’s gorgeously saturated photographs of food markets come together to display both the strength and the fragility that is an essential aspect of the contemporary human experience. 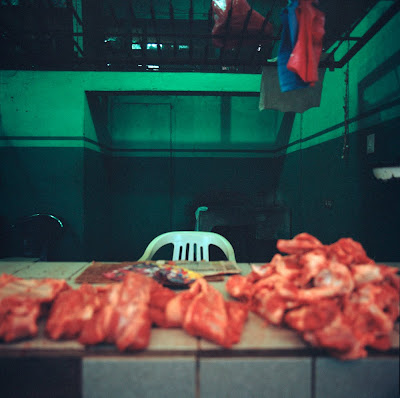 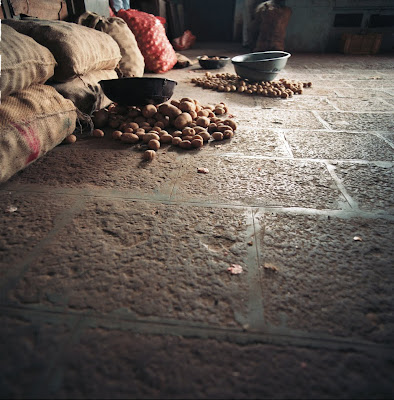 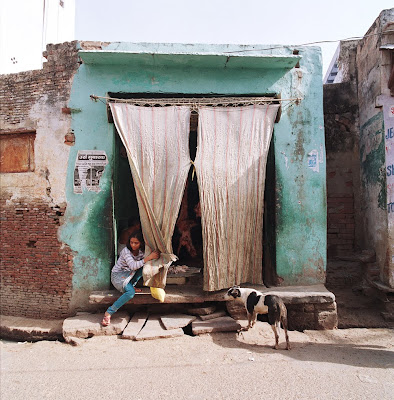 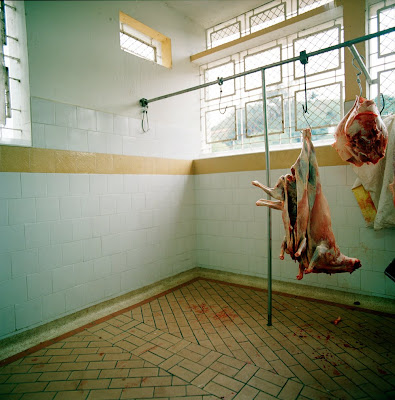 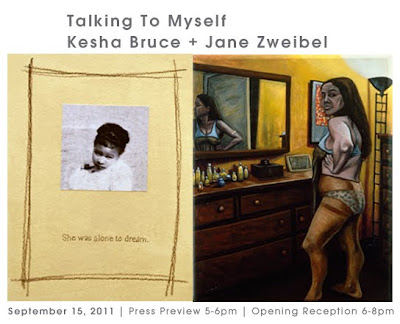 Unravelling the Magic of Narrative
Every narrative involves the powerful interplay of memory and introspection that allows us to make sense of the world by defining who we are and how we fit in. In the second exhibition of Baang and Burne Contemporary’s six-week art event, titled “6×6″, artists Kesha Bruce and Jane Zweibel offer viewers a contemporary entryway to the rich tradition of storytelling in art.

The narratives Bruce and Zweibel present in Talking To Myself are composed of a mysterious mix of elements culled from the intimate terrain of memory, personal mythology, and the mundane remnants of everyday life.

From Zweibel’s large format figurative paintings on canvas that pay homage to Caravaggio to Bruce’s small delicate works on paper that render character and place through the use of minimalist text, each work in the exhibition speaks and relates to the next like non-linear chapters of a novel that doesn’t easily settle neatly into a comfortable beginning, middle, and end. 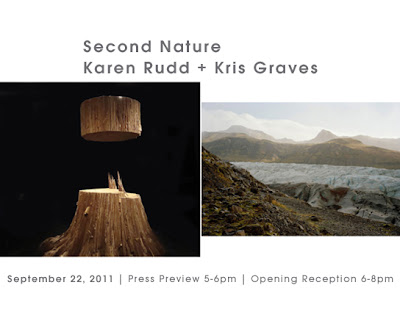 Meditations on a Peaceful Apocalypse
Landscape, nature, ecology, and environmental issues have long been a powerful source of inspiration for contemporary artists. In the third exhibition of Baang and Burne Contemporary’s six-week art event, titled 6×6, the artwork manages to address all of these contemporary issues with uncommon beauty and grace.

In Second Nature, artists Kris Graves and Karen Rudd present a vision that is simultaneously apocalyptic and hopeful. Graves presents a series of hauntingly sublime photographs of the Icelandic landscape that enable the viewer to reconsider their relationship to the earth. Likewise, Rudd’s strikingly realistic sculptures of life-size cedar tree stumps, created from reclaimed cardboard and wood glue, express sadness and irony, but also the serene idea that nature is somehow restoring itself. 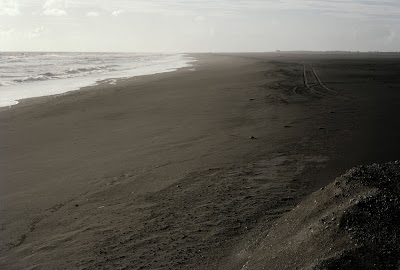 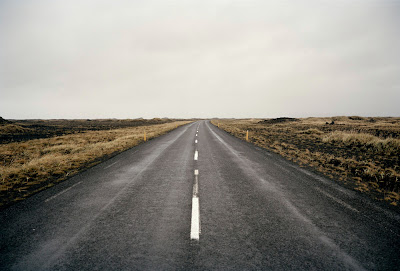 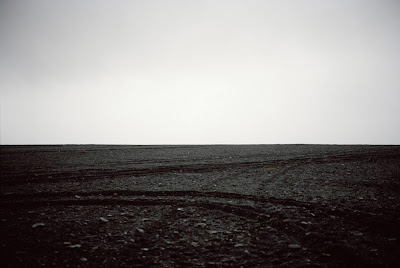 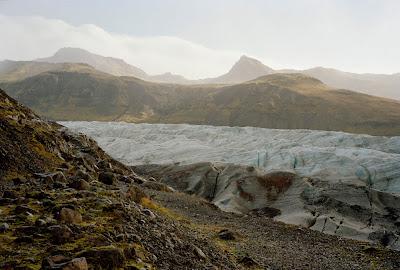 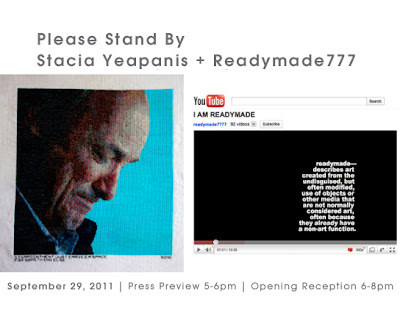 The Art of Participation
From Cubism to Andy Warhol’s Campbell’s soup cans, Pop Art still holds court as one of the most relevant art movements of the twenty-first century due to its on-going dialogue with contemporary popular culture. In their exhibition, Please Stand By, artists Stacia Yeapanis and anonymous internet video artist Readymade 777 take this discussion a step further by using appropriation and transformation to reveal how viewers and users of cultural products like TV shows, movies, and video games, not only make meaning from the images they digest, but often become active participants in cultural production themselves.

Yeapanis’ hand-made cross-stitches are painstaking recreations of a single frame from TV shows such as Buffy The Vampire Slayer and Xena: Warrior Princess, using the decorative handicraft of embroidery as a symbol of how far we have invited and incorporated these fictional TV characters into our personal lives. Similarly, artist Readymade777 cuts together everything from VHS home video footage, film clips, 50’s TV commercial, to pornography turning them into disorienting and often harrowing digital assemblages that jolt the viewer into making visual and psychological connections between images and genres. 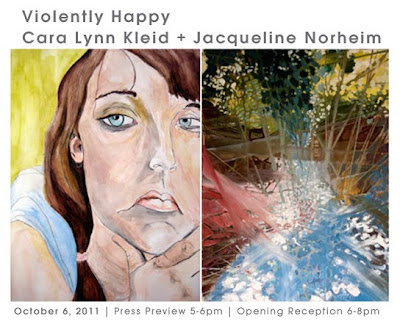 Fierce Bliss Without Boundaries
Some art exhibitions are shaped around a singular theme or even around a particular medium, but in the fifth exhibition of Baang and Burne Contemporary’s six-week art event, titled “6×6″, the artworks presented are bound by their unflinching sense of immediacy and a vibrant, primal relationship to their subjects.

In Violently Happy artist Jacqueline Norheim’s complex, multi-layered paintings use texture and manipulated imagery, to explore spacial relationships and the mystery created by the use of negative space, bold energetic gesture and varied degrees of opacity. The result is a collection of bold, energetic paintings that straddle the subtle line between order and chaos.

Well known for her highly sought after “10 Minute Portraits”, Cara Lynn Kleid’s work is part portrait session and part performance. Each of her colorful, playful, yet earnest drawings captures the intense vulnerability shared by both the artist and the subject as they sit quietly, face to face, during each drawing session. Likewise, her revealing mixed-media paintings investigate emotion, identity, and the human face as a boundary and portal between our internal and external worlds. 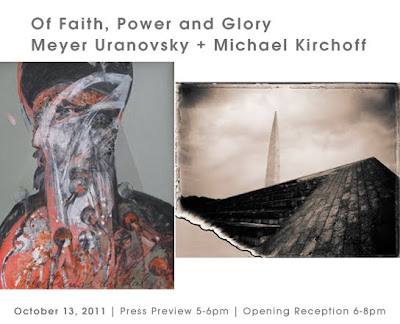 Where Nostalgia Meets Suspicion
In Of Faith, Power, and Glory, the sixth and final exhibition of Baang and Burne Contemporary’s six-week art event, titled “6×6″, the gallery juxtaposes photographs of Russia of a by-gone era with
strikingly painted portraits of dictators and tyrants inspired by present day “bad guys” of contemporary society.

Photographed over the course of multiple visits since 2007, Michael Kirchoff’s ongoing body of work “An Enduring Grace” explores the landscape and cultural heritage of Russia. Inspired by a childhood fascination with television broadcasts from the then Soviet Union and images of Moscow’s Red Square, Kirchoff approaches the contemporary Russian landscape with a nostalgia and wonderment that is captured on the transient Polaroid film.

In stark contrast to Kirchoff’s Russia of endless beauty and rich history, Meyer Uranovsky’s portraits of archetypal villains such as army generals, politicians, judges, kings, and dictators flanked by their henchmen, seem eerily to have been extracted from Kirchoff’s brooding Russian landscapes. Uranovsky refuses to name names, but his works, which reference the tradition of state portraiture, bring to mind Stalin, Franco, Mussolini, and Castro. But even as Uranovsky paints these characters with suspicion his role remains more that of a satirist than judge. 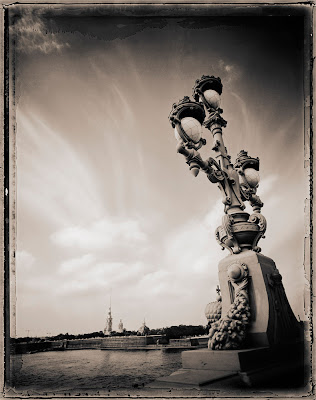 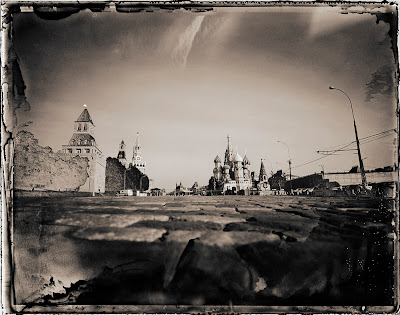 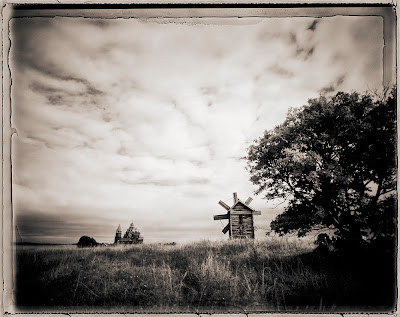 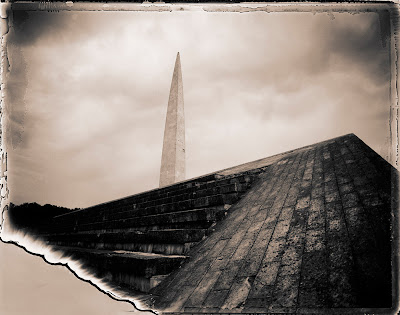