by Greer Muldowney and Amanda Thackray

This fall, the Princeton University Art Museum (PUAM) recreated Felix Gonzalez-Torres’s “Untitled”, 1991 billboard installation in 12 locations scattered around the central New Jersey area. The billboards consisted of one of Gonzalez-Torres’s minimal and profound images of a bed, rumpled and empty with no explanation. The Billboard display is just as much part of the work as the photograph itself; wholly in public, usually banal locations, with an image that is both universal and perplexing in simplicity, and what some would call beautiful. 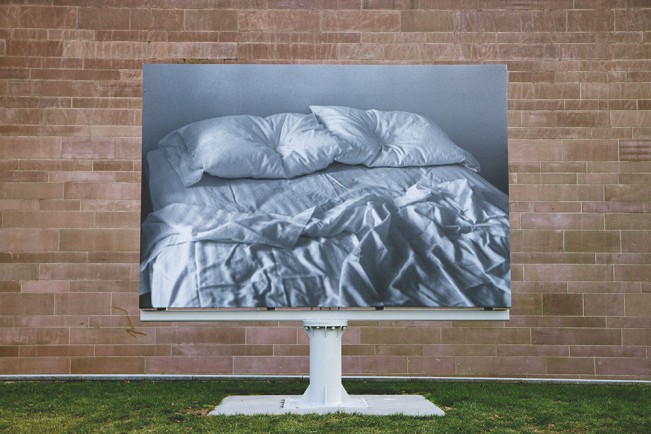 The meaning of the image is attributed to Gonzalez-Torres’ deceased partner, who past on from an AIDS related illness in 1991. Relating this to the “Untitled” Billboards creates a dialogue about love and loss, intimacy and the public show of grief, especially within the historic context of the AIDS epidemic of the 80’s and 90’s. Felix Gonzalez-Torres’ would also pass away from similar causes in 1996, after a too short career creating art installations that always implemented a segment of public interaction, where viewers could take part of the work with them, or view it in places that were accessible to most, not just Museum goers.

The PUAM exhibition was on display from Monday, October 21, 2013 – Monday, December 16, 2013. If you are puzzled about why I am writing about this now closed exhibition, I am with you, and I am sorry if I have gotten you excited about the experiential qualities of this work that you may now not experience as it was intended by the artist. My bad. However, I want to talk about this experience, and how I did end up participating in an all too familiar forum, and hope you can related to how we value this kind of art making/watching.

I am actually from the Princeton area, and had the best intentions of going home at some point this fall to find some of the billboards (as many of us do for countless exhibitions- near/far; short/long). The opportunity seemed so long, but sadly time got away from me, and I never left Massachusetts for home or art, alike. I was left to read the articles describing the work, until, on December 7th, I logged onto facebook of all places and photos of all the billboards started to fill my feed.

A friend and fellow artist, Amanda Thackray, had made the trip home, and was posting images of each of the locations as she found them throughout the course of the day. I was sitting at my lab job, panged with the inevitable jealousy that I hadn’t been able to do this myself (and lets face it, revel in the attention of social media followers), and instead following her obsessively throughout the day. A few photos were posted upfront, then one every hour or two. I left work and continued to follow my feed religiously on my phone; completely stoked that someone I knew was honoring this work, and that it was reaching another level of public sharing.

Now, I appreciate the work of Felix Gonzalez-Torres, but do not fain to be an expert on his practice. I do know that one of his most celebrated quotes about his work was “I need the public to complete the work,” and feel that in the instance of this social media escapade, there may be an added level to this celebrated installation.

I started to comment on Amanda’s photos and sent her a few e-mails about why she decided to record her experience with the “Untitled”, 1991 Billboards and share it. A few geek rambles later, and the small Q and A bellow was composed, along with the images that Amanda and friend/photographer J.A. Caldwell collected along the way. 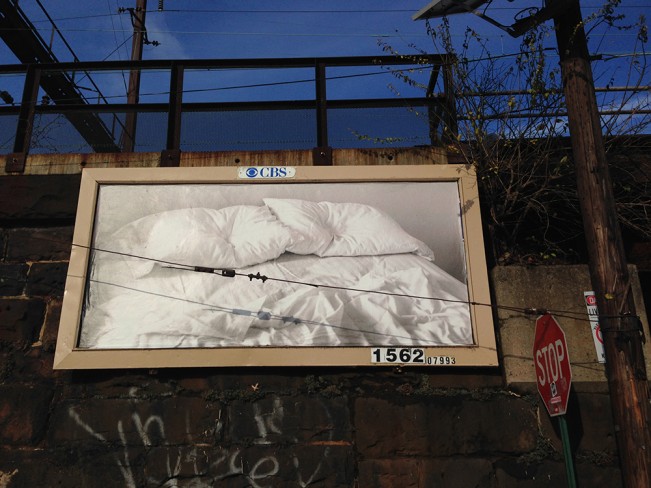 Greer Muldowney: First of All, I’m jealous that I did not get to do this myself, but grateful that I got to follow along in some way with you. What made you decide to see all 12 billboards in one day?

Amanda Thackray: When I first heard of the exhibition, I was excited for a number of reasons. I have always been a fan of Gonzales-Torres. The first piece I had ever seen of his was Untitled (Death by Gun), a poster which lists the names of individuals killed by guns in the United States in one week, in May 1989. The work is exhibited as a stack, off-set printed in an open-ended edition. Visitors are encouraged to take copies from the stack, which is replenished as it is depleted. I have always been fascinated by his ability to make work that balances between multiple media at once: printmaking, sculpture, interactive installation, and in the case of the Untitled billboards, photography and public intervention. Like you, I was absolutely thrilled to have public experiential work scattered throughout the surrounding areas of my home town. For the past few years I have been working at Princeton University as the Printmaking shop technician. All these elements combined made for the perfect storm. When J.A. Caldwell took interest, we decided to make it a day. We drove down from the Newark area, and started at the closest billboard, located in New Brunswick. 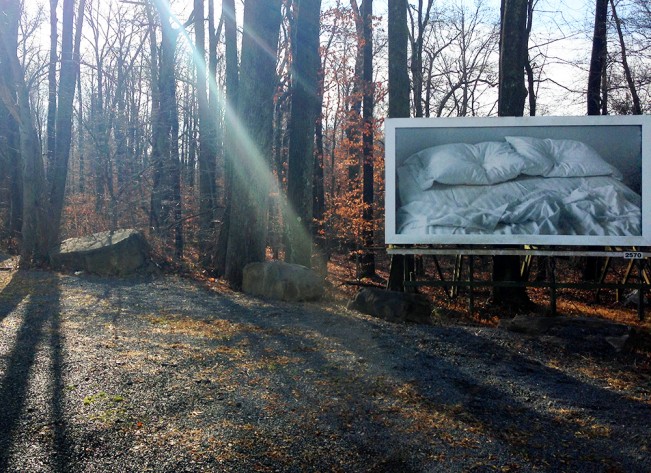 GM: Thinking about them as experiences in the landscape, how did you react to some of the placements of the Billboards, or the damage that has so clearly been done to them? Do you think the placement of them removed them even more from context?

AT: The most exciting part of this pilgrimage, for me, was actually finding the billboard locations. The PUAM had a pdf map of all the locations on its website, but the directions were specific within 100 feet or so, often specifying the direction that the billboard faced on the street. It certainly helped being familiar with the towns, however it was always a surprise as we drove up to the unmade bed peeking out from behind trees or looked behind to find it on the back wall of the train overpass. 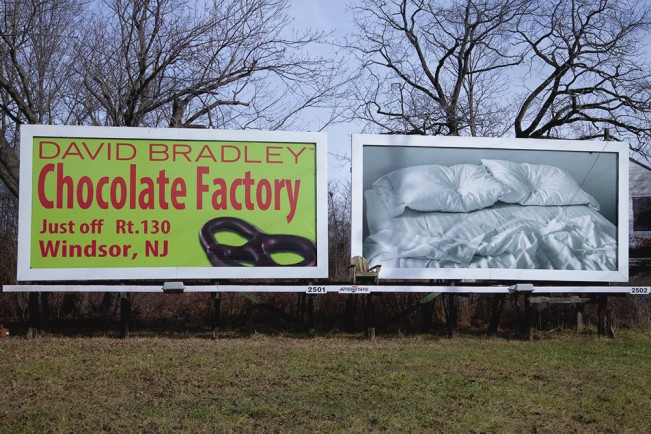 It is interesting how the landscape on the sides of roads and highways varies; some billboards are surrounded by trees, others on brick walls sitting below train tracks. Once in the heart of Trenton, looking for billboards meant going into actual neighborhoods – the torn and defaced billboard was on the side of a building in a run down neighborhood next to the canal. It was hung low enough that you wouldn’t even need a step stool to reach it. When we realized that this frame, with the print ripped off almost completely, was a Gonzales-Torres, I was surprised that this was the first and only of his pieces that was defaced. 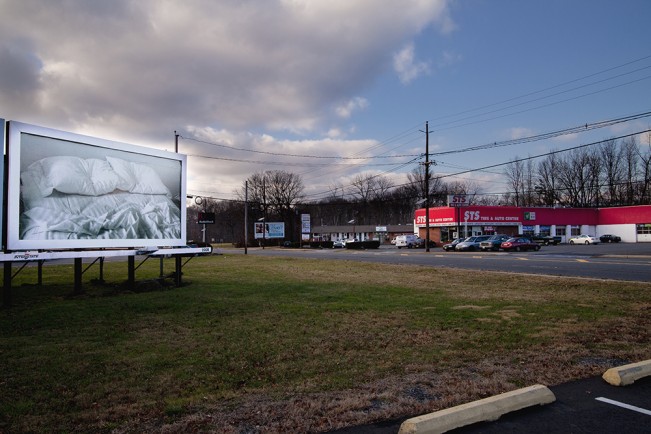 I am not sure how much thought and planning went into the placement of the billboards, or if they are simply placed on the first twelve available billboards in the Mercer county area. However, they are spread throughout city and suburban areas, highways and train stations and urban neighborhoods, and it seems as thought the intention is to reach everyone on their daily commute. 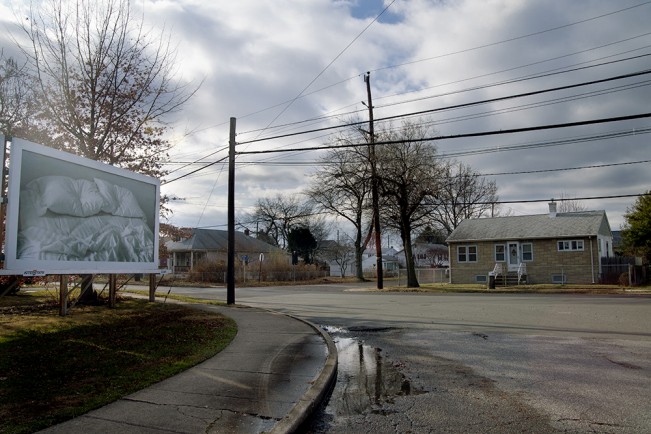 GM: Were there other people stopping to find the Gonzalez-Torres pieces?

AT: We did not notice any other drivers or pedestrians actively taking notice of the pieces, and I have not heard of anyone else setting out with the billboards as a distinct destination. Although, when I started to post the pictures on social media, friends and family who are
not familiar with Gonzales-Torres’ work, started mentioning how they had come across them around town. While it is one experience to intentionally search for the work, it is an entirely different – and perhaps crucially central – experience to happen upon the work without its primary information or context. It is a beautiful, simple image that provides a moment of meditation in an otherwise busy and preoccupied day. 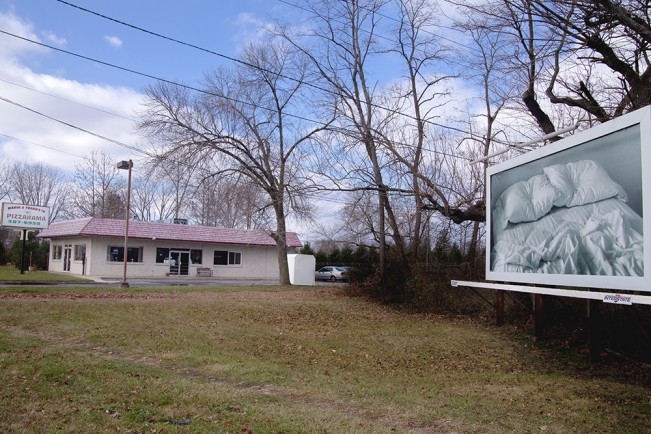 GM: Do you think they were respected as art pieces, or created more questions than answers about public art?

AT: That is a difficult question for me to answer simply. I came into my relationship with the billboards knowing much about the artist and the project, however, unless you are previously aware, you would never know their nature or purpose – there is no attribution on the billboards themselves. This is incredibly appropriate lest the pieces function as an advertisement for the museum or estate of the artist. As an experiment, I google searched “unmade bed billboard” and it was not difficult to find images and information of the work. But while the work itself is largely enigmatic, its purpose is consistent – to create pause. It behaves differently in each context and becomes redefined by each viewer. 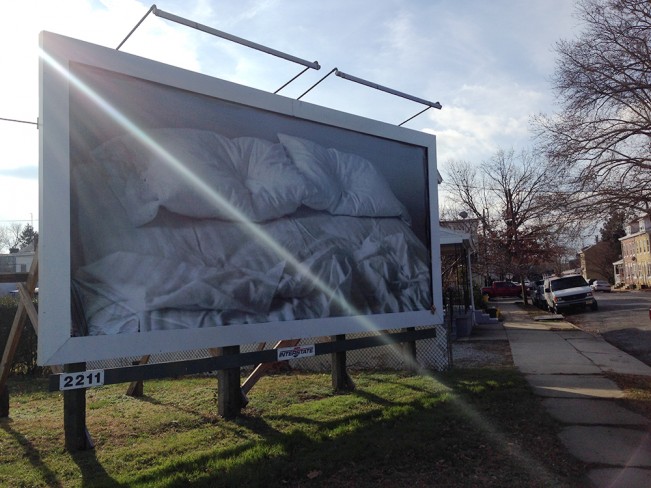 It is easy for a commuter to pass by one of these billboards, on the highway or around town, take notice, and just move on. It is a peculiar image given its billboard context, especially its lack of bold graphics and advertising slogans, but it is not a disturbing one.The piece becomes slippery, blurring boundaries and allowing different people from different perspectives to take it in. It has personal meaning but it doesn’t dictate. So it has the ability to create meaning for the particular viewer who might be experiencing the artwork in a revelatory way with out realizing that they are experiencing art. 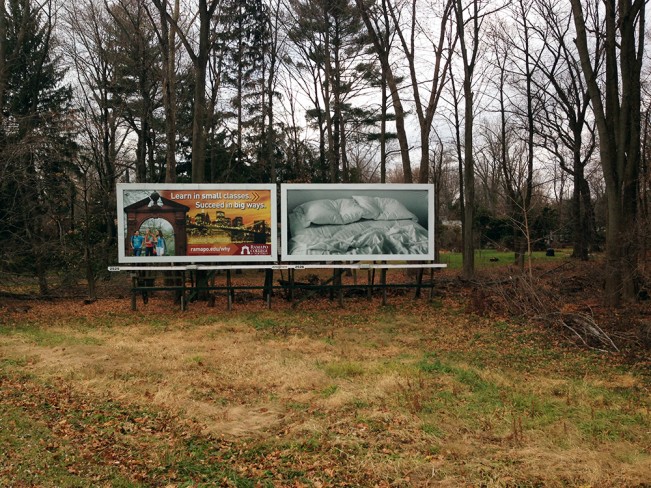 GM: Did you find emotional resonances with them grow over the course of the day, or did they become something else for you? I feel as I saw your images being posted, that more and more it drove the thought of it being experienced again and again home. Revisiting a quiet loss, or thinking about how so many people could see this and feel something different within the parameters of each billboard. 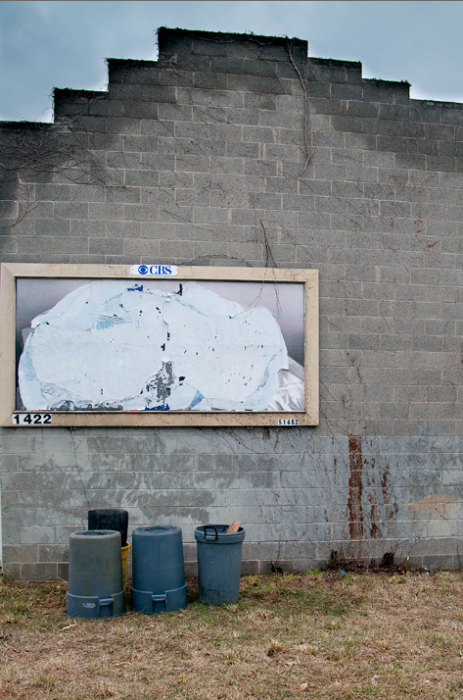 AT: Our experience of the billboards was joyful and sentimental. Every time we parked and got out of the car, we walked around and viewed it at different angles, often in silence, just observing. As it was in late November, the sun was low in the sky and caught on the corners of the frames, creating streaks and sun spots. We would take pictures and discuss the particular anomalies of the setting. Weird trees, a boat that was beached in the woods behind the highway, juxtapositions to other billboards and restaurants and cars. We would be with the particular billboard for fifteen minutes or so before we went in search of the next one. The rest was just the two of us – talking (sometimes about work), listening to music, and generally growing as friends. This to me was what made the experience invaluable. If I had traveled around by myself, the thrill of finding each billboard and moments reflecting on different iteration and location would not be nearly as poignant or memorable. Being able to share this experience and connect with friends through online media furthered these sentiments. I never expected to get the kind of response that I did and for friends to be as taken with the project as I was. I was simply hoping to extend the experience. 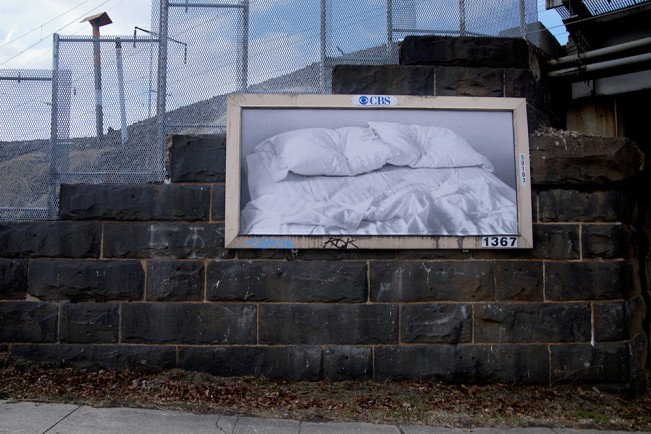 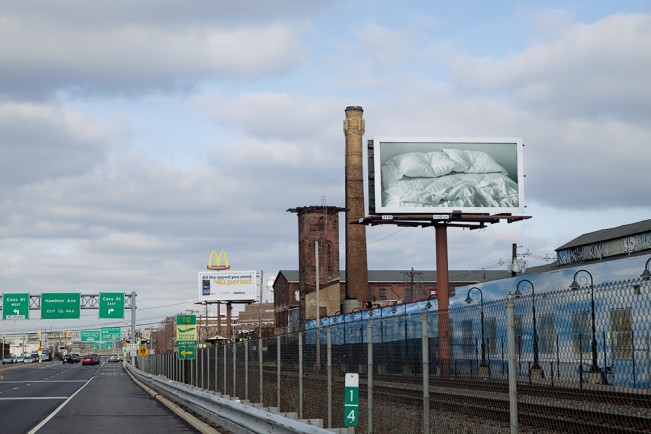 Amanda Thackray is an artist based in Newark, NJ. She holds an MFA from The Rhode Island School of Design and recently completed a year-long residency at the Center for Book Arts in New York City.

Originally installed in 24 locations throughout New York City, “Untitled” (1991) is from the collection of the Museum of Modern Art, New York; Gift of Werner and Elaine Dannheisser, 1996 (180.1996).

NEXT | Mike Spitz: Medicated for your Protection – Portraits of Mental Illness >
< The Laura Pressley Mixtape | PREV