From the Wondereur Series: Sara Angelucci: Aviary by Aline SmithsonMarch 29, 2014 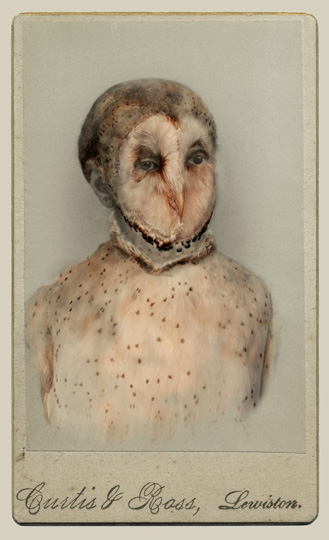 “I’ve been collecting anonymous photographs for many years. During a retreat on the Toronto Islands, I had all these pictures and thought about these lost identities.”

I recently received an e-mail from the folks at Wondereur, a web, iPad, and iPhone application that merges an art marketplace with weekly photo-documentary stories and interviews with artists. They thought Lenscratch readers might be interested in the work of Sara Angelucci and learning about the context with which they share photography. Wondereur won the 2012 Gold Award for Best Tablet Edition at theCanadian Online Publishing Awards and is an Official Honoree of the 17th Webby Awards. You can find the app here.

Sara Angelucci is a visual artist working in photography, video and audio, as well as an educator, living in Toronto. She completed her BA at the University of Guelph and her MFA at the Nova Scotia College of Art and Design. She has exhibited her photography across Canada including exhibitions at the Art Gallery of York University, Le Mois de la Photo in Montreal, Vu in Quebec City, the Toronto Photographers Workshop, the MacLaren Art Centre, the Art Gallery of Hamilton, the Richmond Art Gallery, and the St. Mary’s University Art Gallery in Halifax. Her work has been included in group shows in the US, Europe, and at the Pingyao Biennale in China.

Sara’s videos have been screened across Canada and abroad, at festivals in Europe, China, Australia and the U.S. She has participated in artist residencies at NSCAD (Halifax), the Banff Centre, and at Biz-Art in Shanghai.

“All the birds that I photographed in the Royal Ontario Museum’s collection for this series are North-American and are  extinct or endangered. Other than the dinosaur, it was the first time that I ever sat in front of a creature that was extinct.” 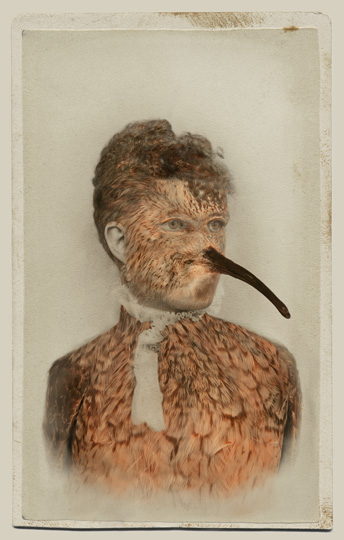 “The image is almost life-size. The head of the person or bird is almost as big as your head. There’s a more bodily experience when you see the work in person. It has a different kind of presence.”

The photographs in Aviary embody many themes of the nineteenth century. Born of the domestic realm, they express a conflation of interests where the family photo album, with its role of commemoration, is brought together with natural science and spiritual emanations. Made by combining photographs of endangered or extinct North American birds with anonymous nineteenth century cartes-de-visite portraits—they portray creatures about to become ghosts. Of the two extinct birds featured in the series, the plight of the passenger pigeon is particularly telling. Once the most numerous bird in North America, numbering in the billions, it was wiped out by 1914 through a combination of brutal over-hunting and habitat destruction. 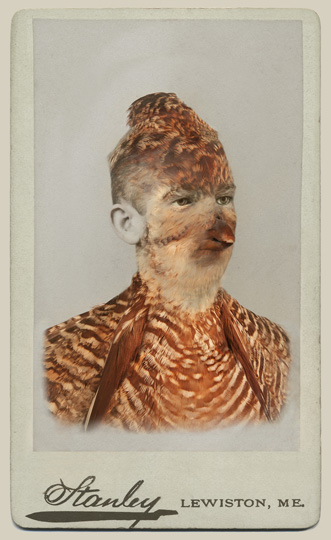 “There’s a theory from ancient times that says, ‘To capture a memory is like trying to capture a bird in an aviary of birds.’” 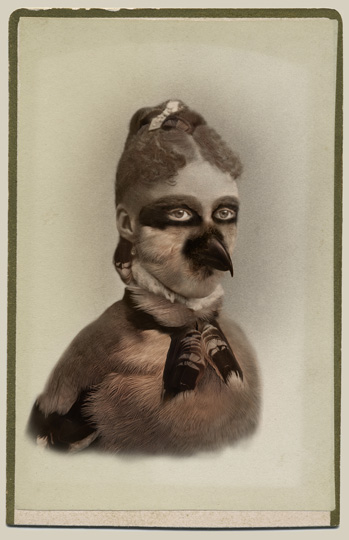 “Most of these works are made from cartes de visite, which is a 19th century photographic process invented by André Disdéri in France. They were visiting cards people would trade amongst family and friends – sort of the Facebook of its day.” 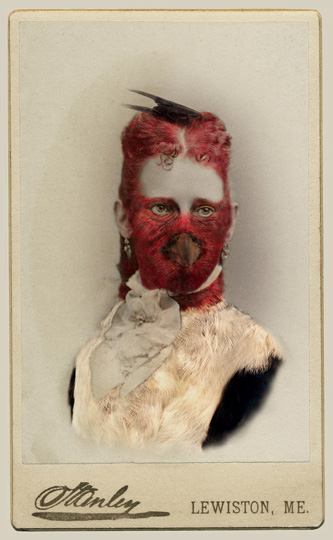 “During the Victorian period, photographers would go out into the world and use cameras to capture everything: animals, exotic people and places. At the same time, there was the capturing of exotic animals.” 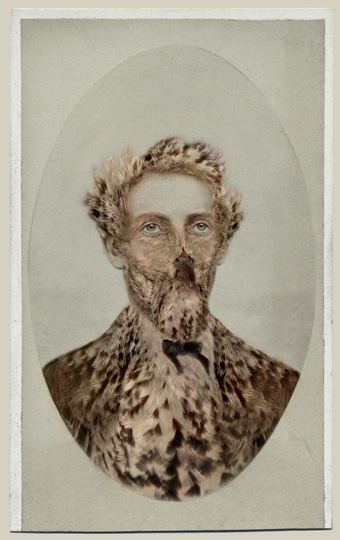 “I started looking at this idea of how the camera aided colonization: our sense of entitlement over other beings and creatures without a critical understanding of what that entitlement meant. The camera, in a way, was an extension of that attitude.” 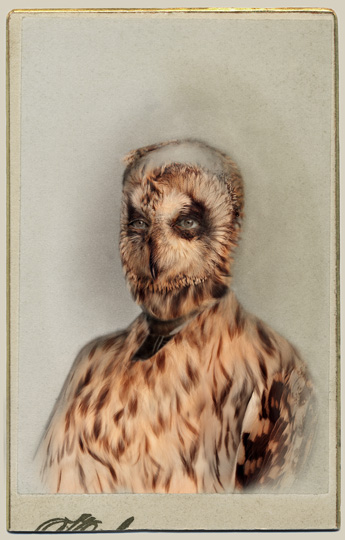 “By producing a human-bird creature, I’m marrying the history of what was going on in that period. I’m creating these hybrid beings that sit somewhere between the human and the bird, but also look at the natural history of that time.”