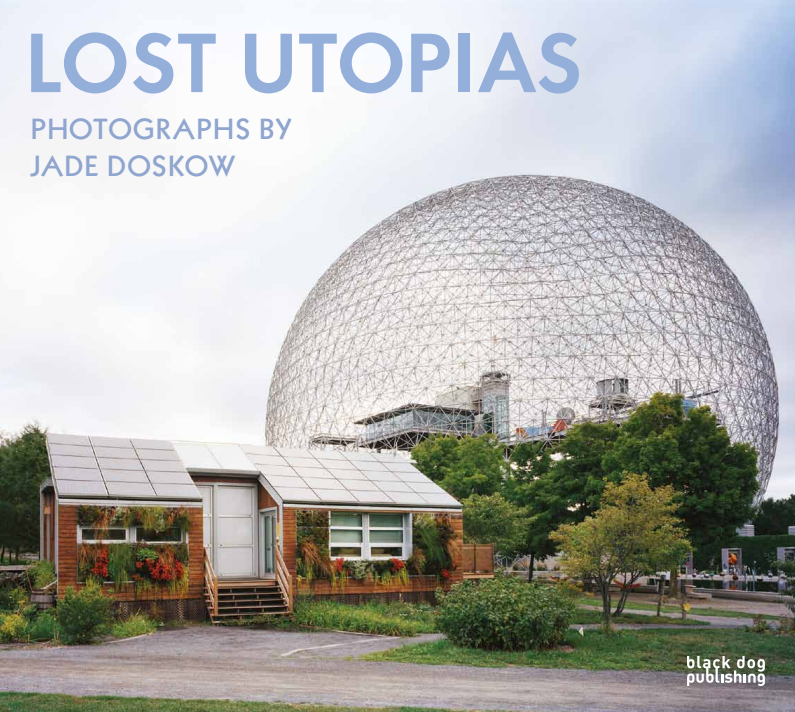 Architectural and landscape photographer Jade Doskow has always been fascinated by architecture that has outlived its original purpose.  For almost a decade, she has focused her attention on architecture once futuristic–that of World’s Fairs and Expos–now in an era of decline. Her project, Lost Utopias considers the visionary and dystopian characteristics of structures, that at one time, inspired and transformed our ideas of space and possibility. So many of the engineering feats of the past that define a city’s skyline,were the products of World’s Fairs: the Eiffel Tower, the Seattle Space Needle, Montreal’s Buckminster Fuller’s geodesic dome, and San Francisco’s Palace of Fine Arts.

Lost Utopias has recently been published as a monograph by Black Dog London and can be purchased here.

Jade Doskow is known for her rigorously composed and eerily poetic images that examine the intersection of people, nature, and time. Based in New York, she holds a BA from New York University and an MFA in Photography from the School of Visual Arts. She is on the photography faculty of the School of Visual Arts and International Center of Photography. Doskow was named ‘One to Watch’ by American Photo in 2013; other publications include The Atlantic, American Photo, Design Arts Daily, New York Observer, NPR Picture Show, ArchDaily, and Wired. Recent exhibitions include SIFest Photo Festival in Italy, Lost Utopias at Onishi Project and Stories in the Social Landscape at ICP. Her photographs were featured on billboards as part of the Paint the City project. Doskow is a contributor to the ESTO archive of architectural photography. Doskow is currently working with the award-winning filmmaker Philip Shane on a documentary about her world’s fair project, due for completion in 2017, and also working on a book of this work. She lives and works out of Peekskill, New York, with her husband Lambert and son Benjamin.Upcoming solo exhibitions include at the International Centre in New Delhi, India, and Walnut Hill in Hudson, New York. 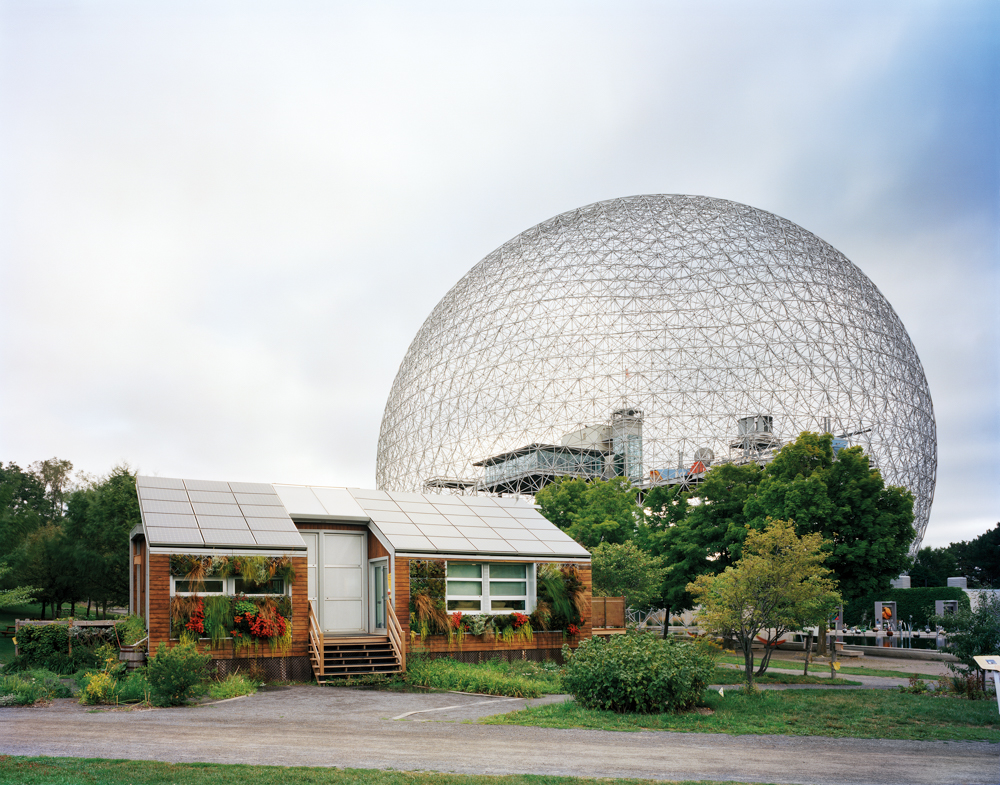 Driving West into New York City on the Long Island Expressway after passing nondescript strip malls and housing complexes, something unexpected appears on the horizon in the middle of a park green. A humongous steel globe towers over the park below, and beyond that looms a gigantic ovoid structure, supported by trunky concrete columns and painted in bold red and yellow. Receding beyond it are two towers that could best be described as supernatural landing pads. This is not a sci-fi movie set, but rather the site of the 1964 World’s Fair in Flushing Meadows, Queens, New York. The globe is the icon from this event, the Unisphere (weighing in at 900,000 pounds of solid steel) and the other structure is the New York State Pavilion, designed by Philip Johnson. 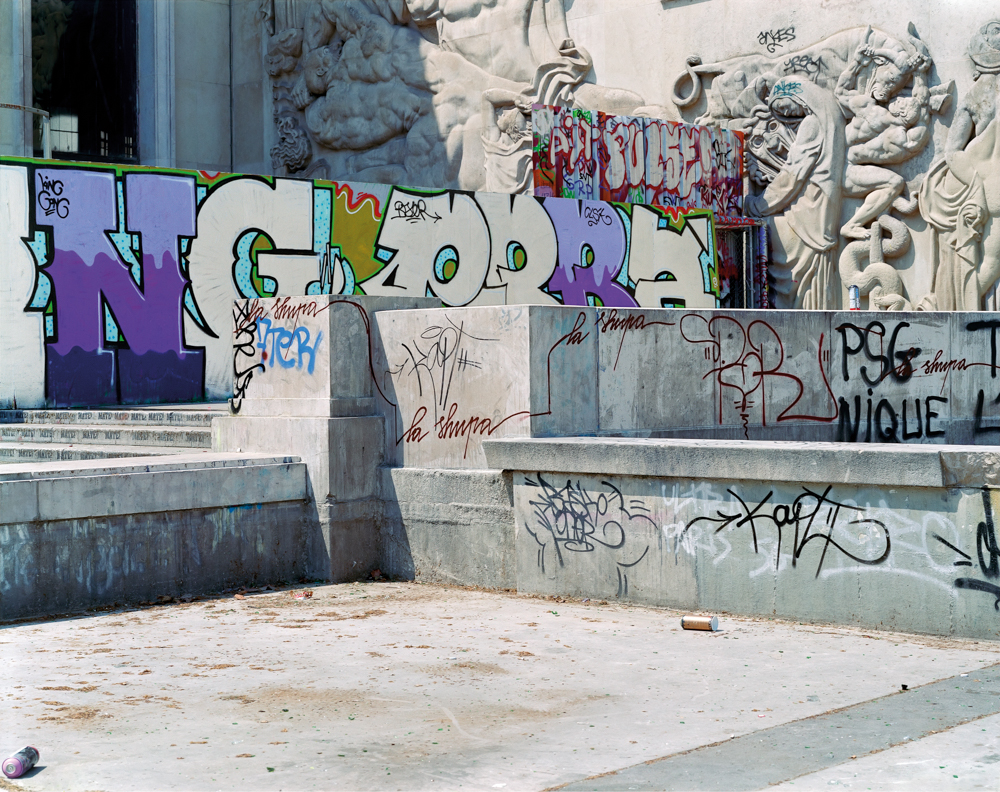 World’s fairs are typically held on the peripheries of cities, taking over huge, unused plots of urban land and transforming them, temporarily, into magical, otherworldly mini-cities populated by over-the-top architecture and stunning exhibits of culture and technology. I have been visiting these unique sites and photographing them, capturing visually the dynamic paradox between the old fair structures and their relationship with the here and now, as often they were built to represent specific utopian ideas from the era in which they were created. I feel, visiting these sites, that these places are a kind of time warp that crystallizes the pure essence of past decades and centuries through the remaining architecture and landscaping. 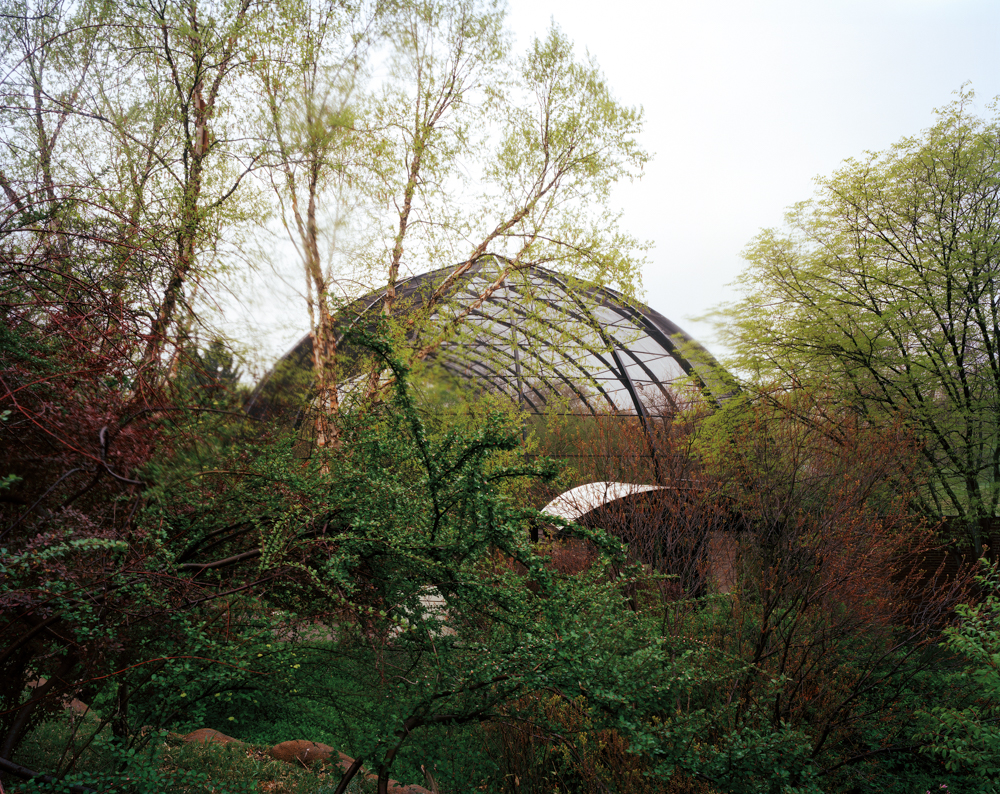 It was a trip to Seville that originally sparked the idea. I have always been fascinated by architecture that has outlived its original purpose. In Seville I was struck by the immense contrast between the old city on one side of the Guadalquivir River and the 1992 fair site across the water, modern, somewhat garish, somewhat abandoned and also somewhat in use. It was odd to say the least. After researching the 1992 fair when I returned to New York, I learned about an event that attracted millions of people, that many countries wholeheartedly participated in, and that forever changed the architectural landscape, transportation and infrastructure of Seville. I returned to Seville and made photographs depicting the wild variety of how the fair site was being utilized: the RTVA (Radio y Televisión de Andalucía) building (housed in a former pavilion building), an abandoned fountain filled with algae and beer cans, the old Environmental Pavilion, stately and unused, the bushy landscaping taking over the building in every direction. 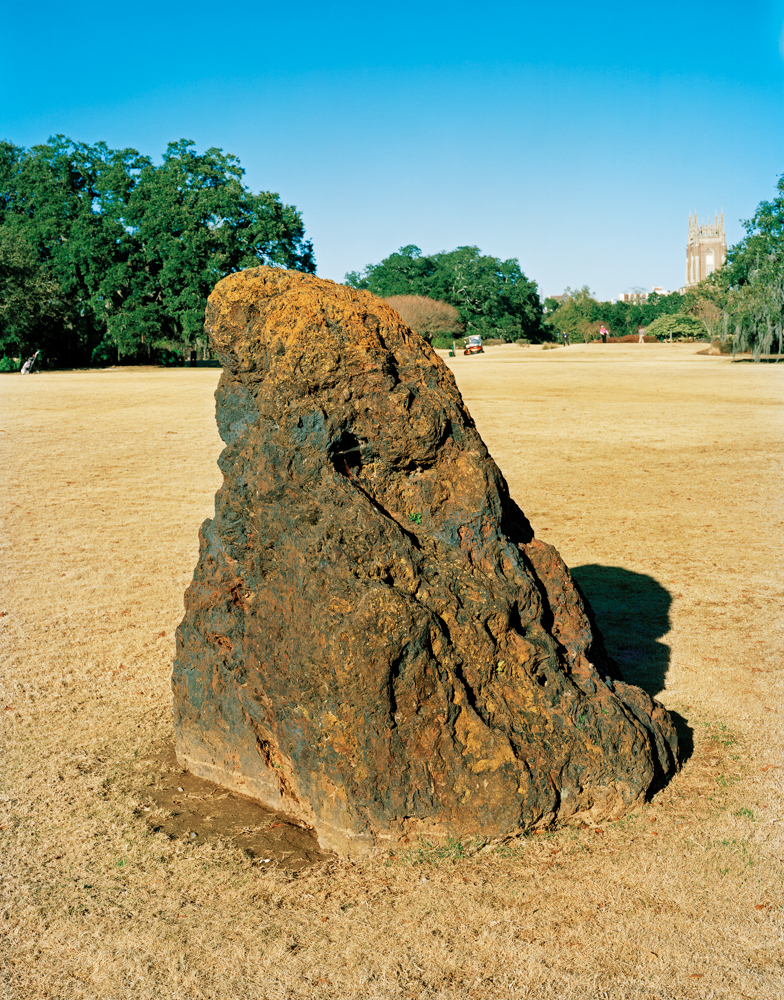 In New York I took up visiting the 1964 site every few months, revisiting Johnson’s old pavilion and photographing it during different seasons until I felt I had fully captured the spirit of the place. Since I last photographed it in 2013, the building has been assigned historic landmark designation although there is a serious lack of funding to actually renovate. A group of dedicated volunteers has taken their own energy and money to start bringing the building back to life. 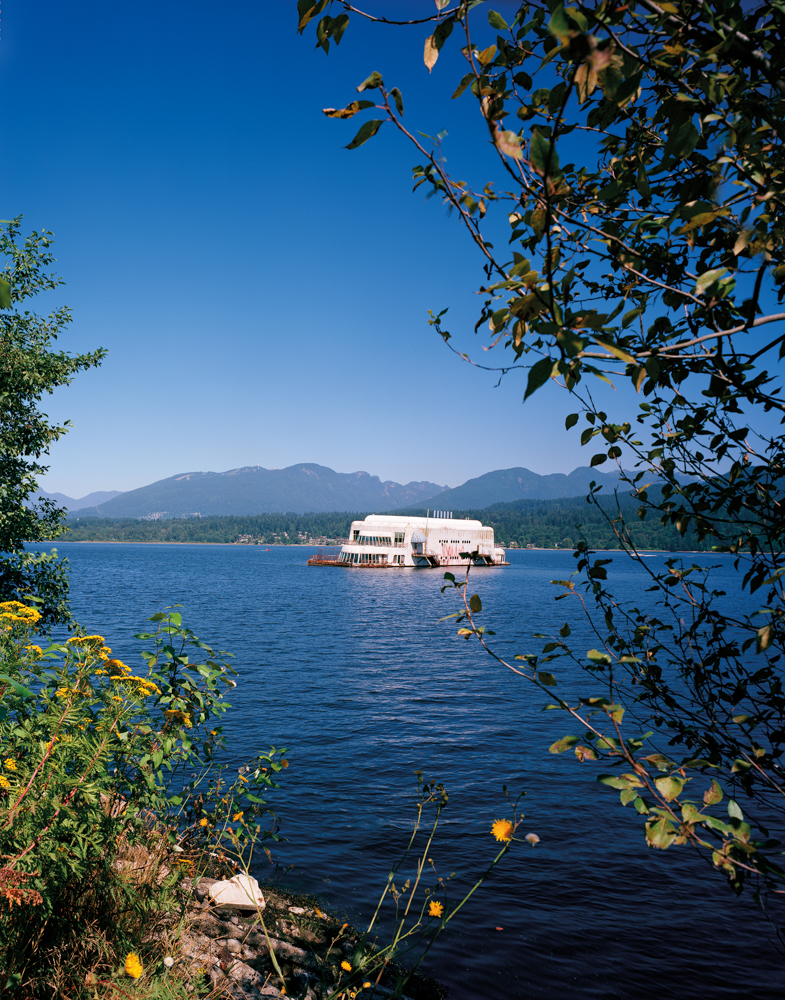 For many people world’s fairs have lost their relevance simply because we now are a global, high-tech economy; one can learn about the latest inventions on their iPad instead of traveling around the world. In the early expositions this was not the case. It was at 19th and early to mid- 20th century world’s fairs that the public first experienced elevators (1853 Dublin), the telephone (1876 Philadelphia), and electronic music with moving film projections (1958 Brussels, designed by Le Corbusier), just to name a few. These fairs were the place to experience the latest and greatest in human achievement. 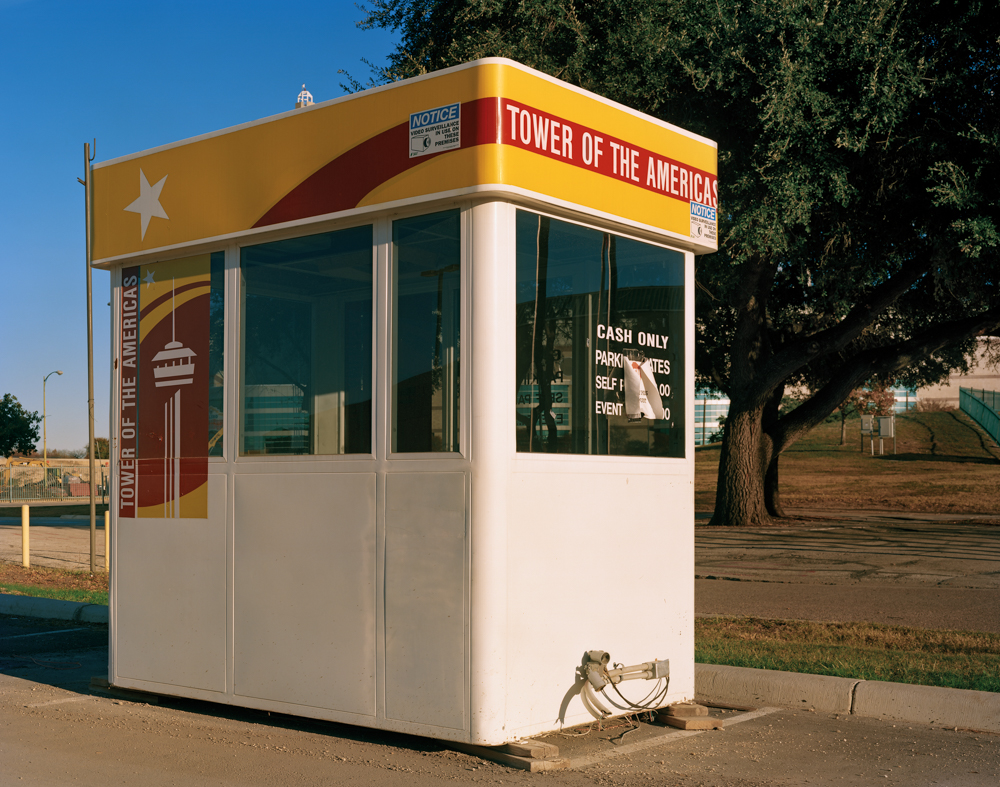 ©Jade Doskow, San Antonio 1968 World’s Fair, “The Confluence of Civilizations in the Americas,” Tower of the Americas Ticket Booth 2013

World’s fairs still take place every 2-4 years (most recently in Milan, Italy) and continue to offer countries a chance to compete and create cutting-edge national pavilions and show off their latest technologies, much like the original fairs of the 19th century. (The United States did not pay its membership dues to the Bureau of International Expositions in Paris and cannot host any upcoming expositions). The pavilions in Shanghai 2010 enjoyed international stardom for their daring, exciting designs. As Europe and then the United States were the industrial and cultural leaders of the 19th century, the rest of the world is catching up in the 20th and 21st centuries, and the countries and cities that choose to invest in World’s Fairs are the countries that are enjoying more recent socio-economic and cultural successes. 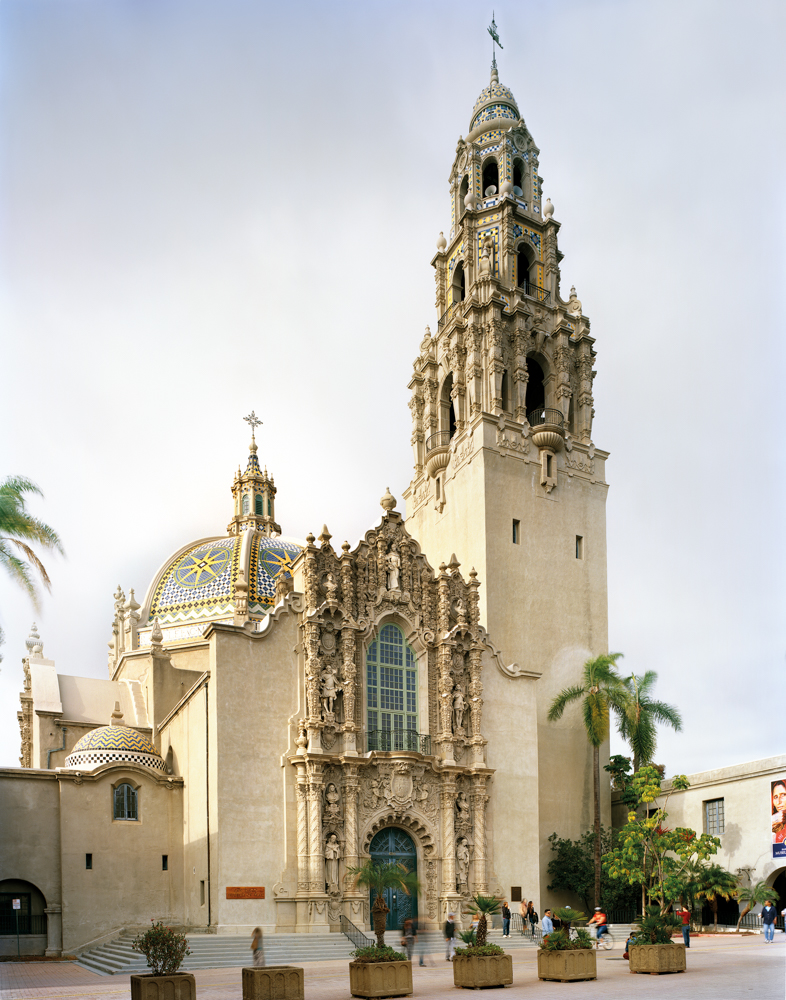 I have discovered that people become attached to the bizarre fair structures left in their hometowns. What remains after the fair closes is often more a bit of luck (the building didn’t burn down, there was not enough money to demolish) than planning, and through my pictures I illustrate the arbitrary nature of what we choose to keep, discard, or reuse on these sites. In the newly published monograph of this work, Lost Utopias, the pictures illustrate the full scope of how these extraordinary, temporary events permanently affect both the cities in which they are held and the cultural mythologies that can still be gleaned from the remaining fair architecture, mysterious, grand, poetically utopian. 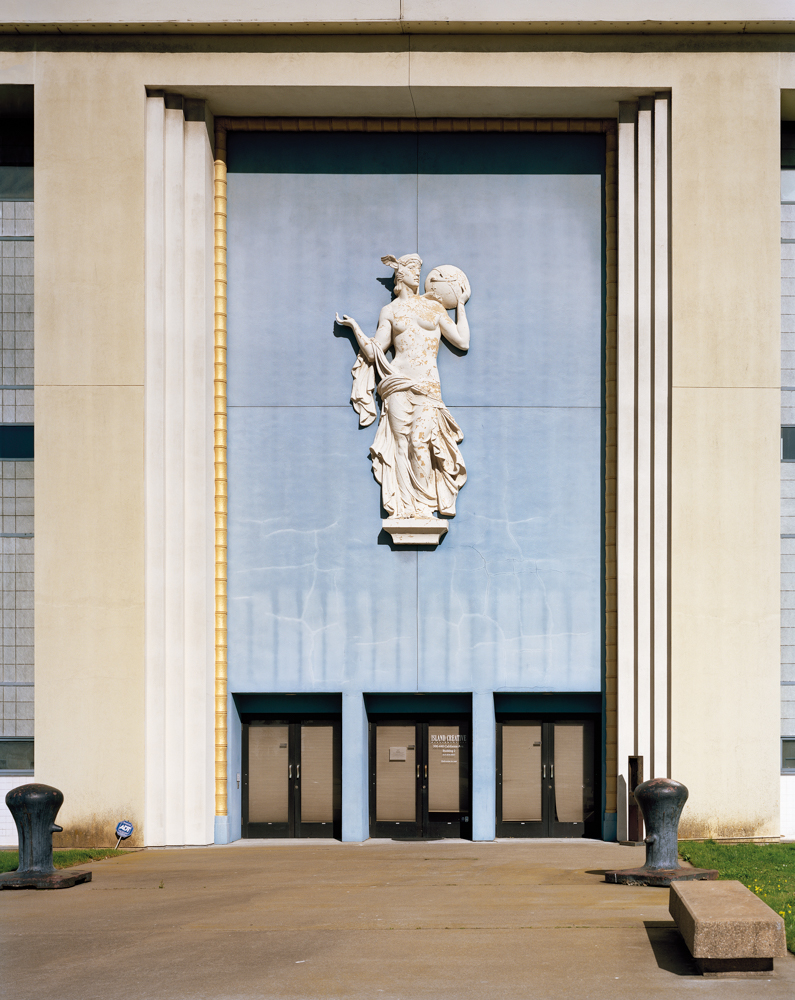 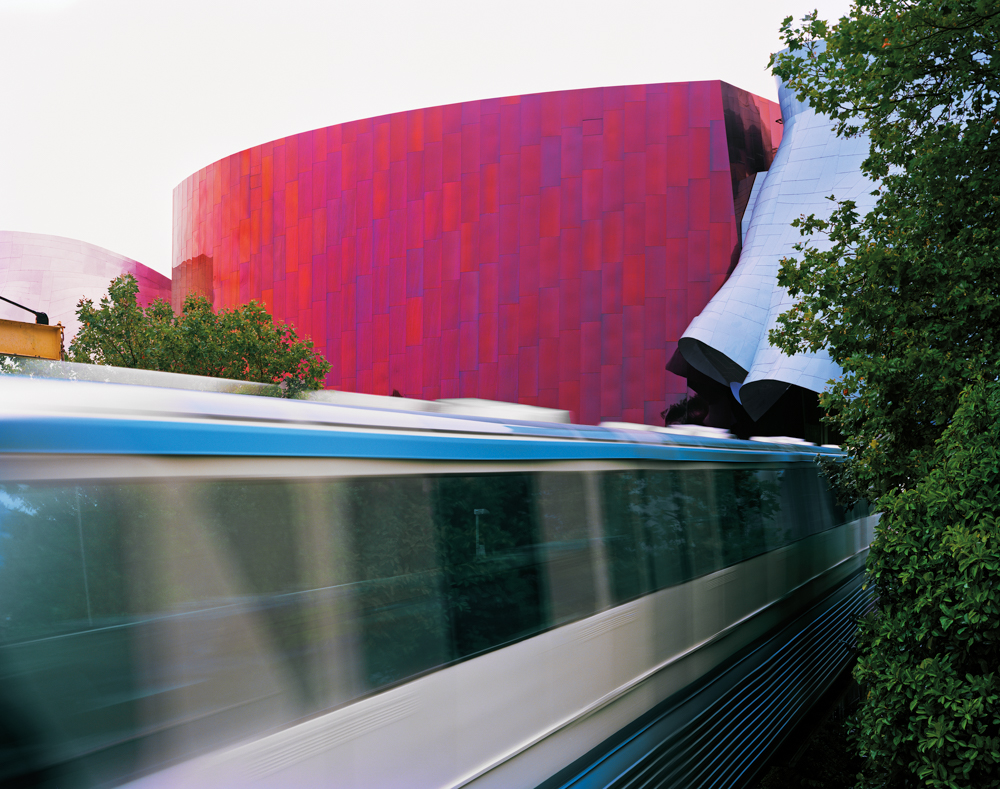 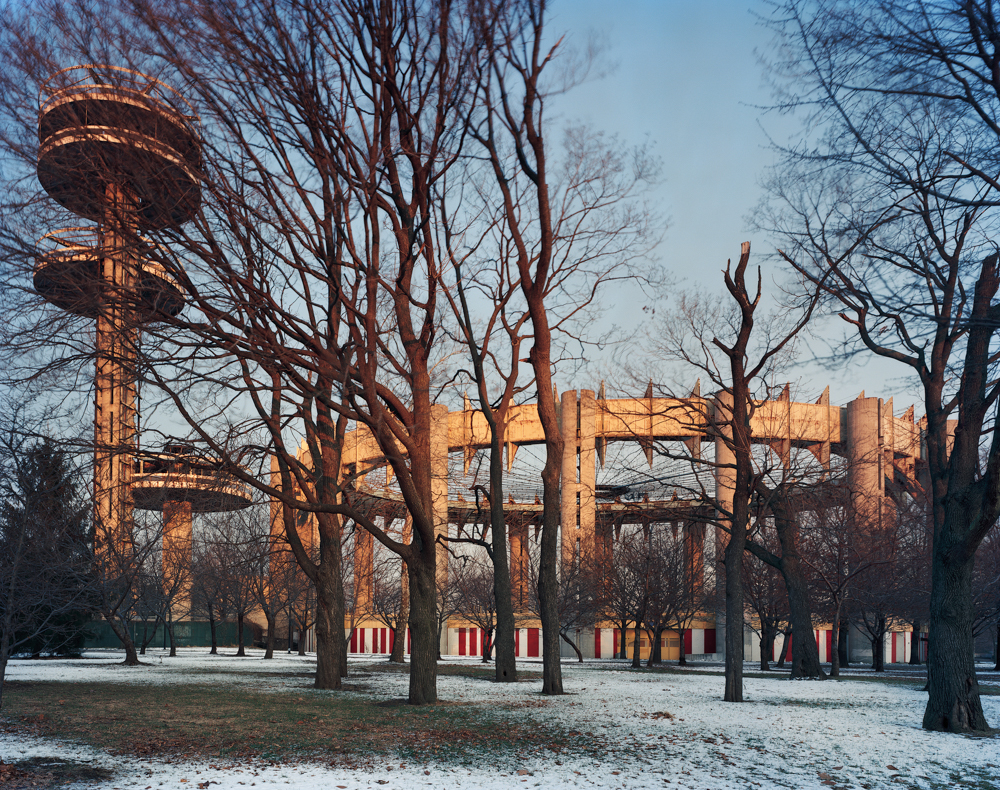 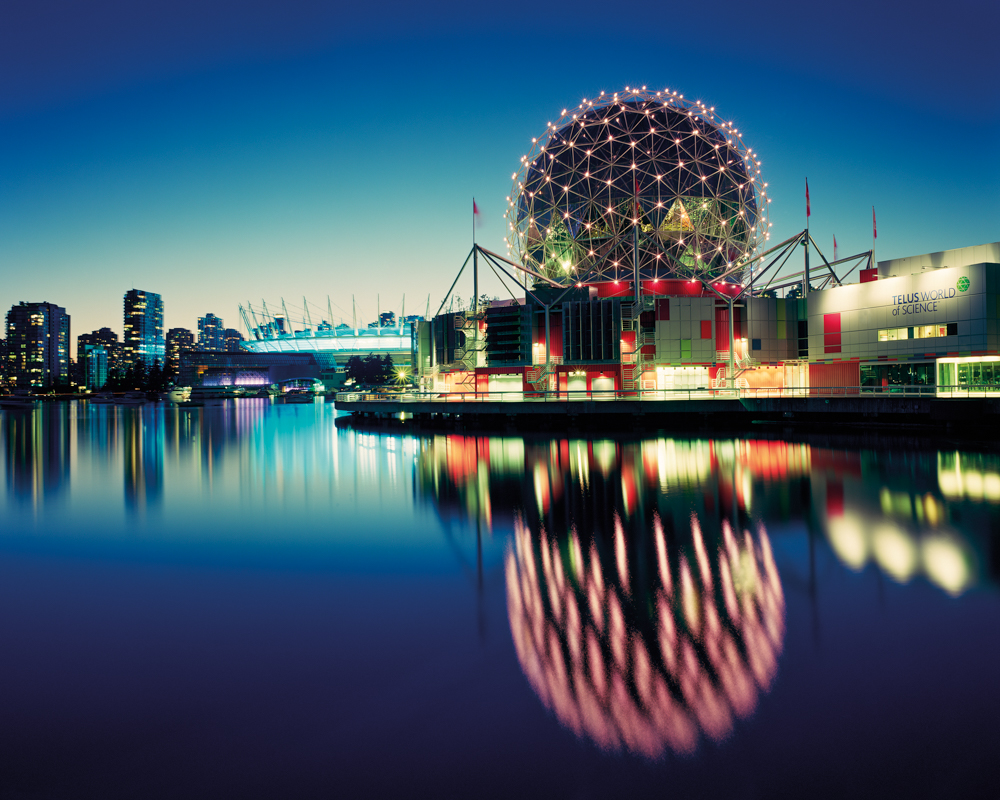 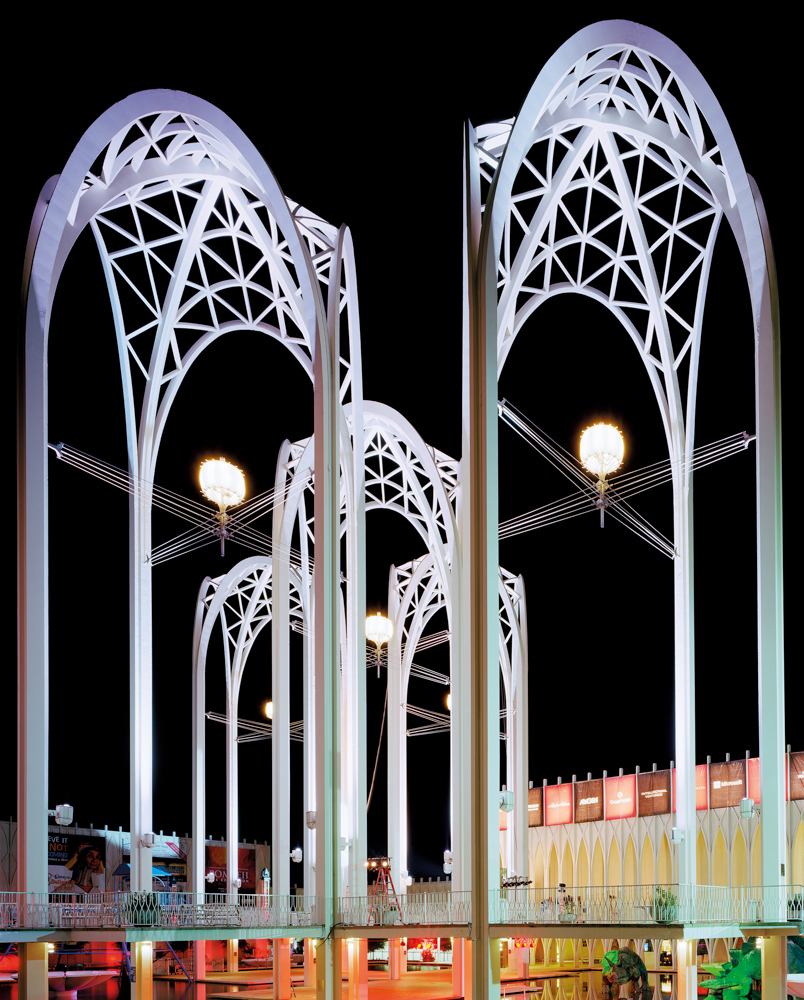 NEXT | Winky Lewis and Susan Conley: Stop Here. This is the Place. >
< Susan S. Bank: Piercing the Darkness | PREV