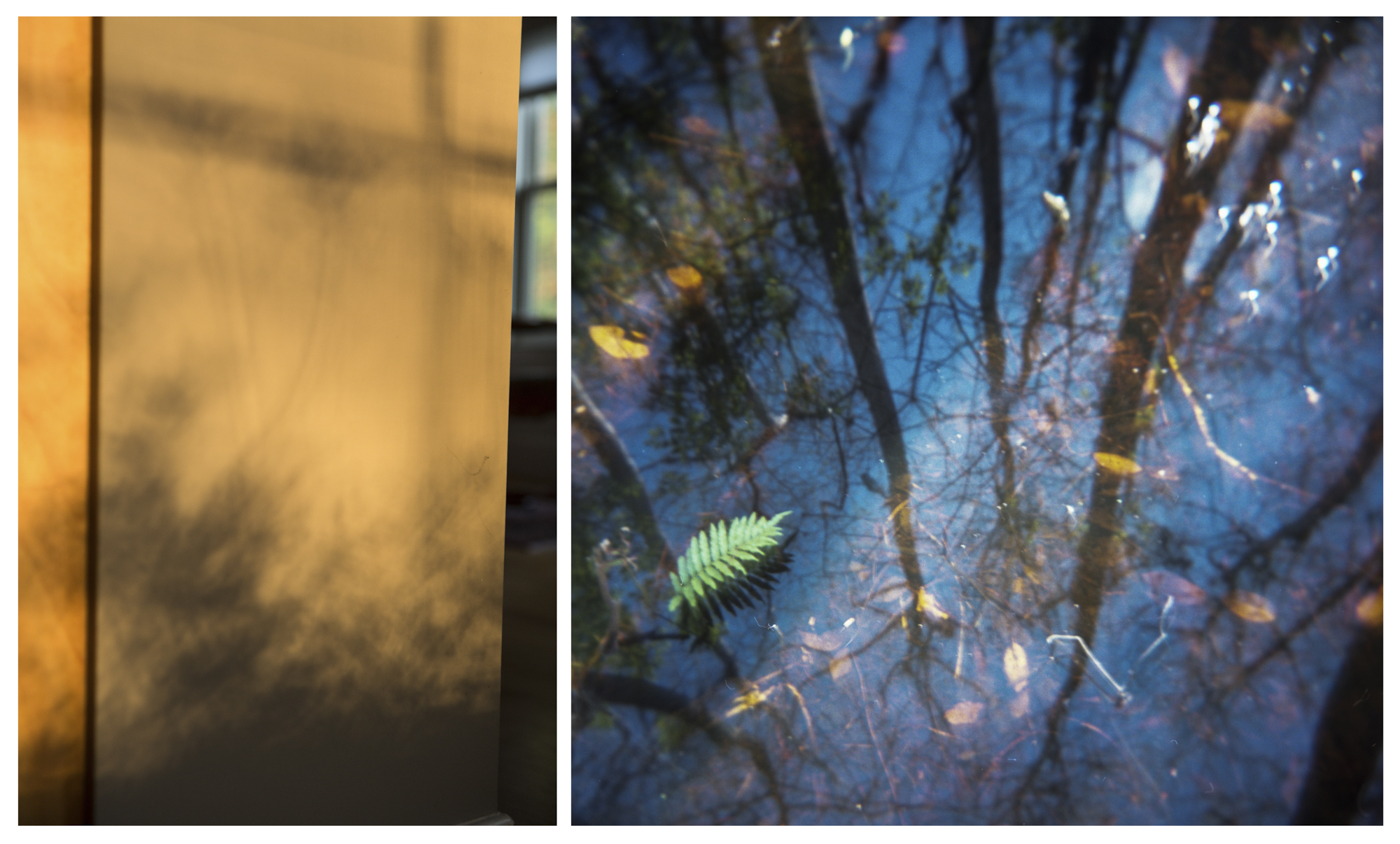 I had the good fortune to be an early observer of an initial presentation of Gail Samuelson’s “Passing Through” project in a workshop in Maine, an appropriate venue for her private homage to light and its dance with the New England landscape. What began as two separate projects fortuitously and unexpectedly melded into a series of diptychs that evoke the beauty and ever-changing light of the four seasons. This accidental marriage produced subjective pairings of light and color; of the inside and outside; of the concrete and abstract.

Using the diptych format inspired her to create a meditation on both her home and the world around that home by seeking the connections between the two. Each piece of the series is its own world, and each piece of the diptych is a unique contributor to the conversation that emerges about that world. The very title of the project, “Passing Through”, has multiple interpretations with the literal capture of light passing through her home as well as her own musings regarding one’s own metaphysical passing through life and an acceptance of the essence of things in this world.

As she relates in the project’s artist statement:

The relationship between the light that enters my house and the light that shines on surrounding landscapes is my inspiration. Sunlight brings warmth and radiance. Morning washes across my bedroom wall as the sun rises over nearby pines and oaks. At dusk, my hallway glows crimson and orange while outside pink berries shine against a pale blue sky and clusters of pine needles float on pools of still water. By placing an interior photograph beside one from a forest or marsh, I marry the inside with the outside, expanding what the images might mean as colors and shapes echo between them. While I began Passing Through in 2019, the ongoing pandemic has imbued my work with new meaning. Like many others, I spend more time at home, more time alone, and more time appreciating the people and places that I care about. 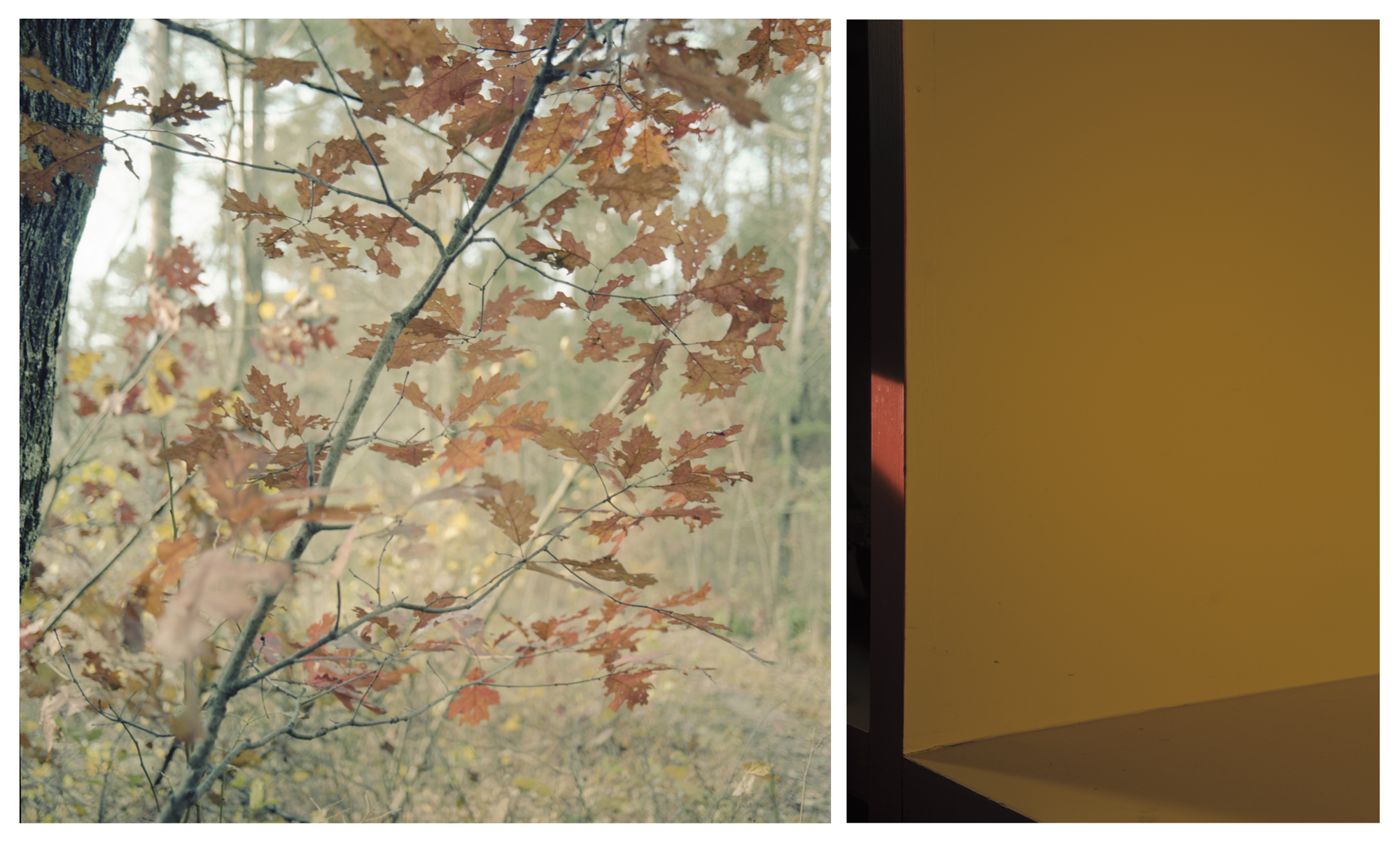 Gail Samuelson lives and photographs in a small rural town southwest of Boston. Surrounded by protected forest and wetlands, she is drawn to the changing light and how it affects her sense of home, the landscape, and family life. Trained to make photographs through a microscope, she now uses a camera to examine and capture details of everyday moments. Often closing in tight on her subjects, she distills and intensifies their form and meaning to unveil underlying emotional qualities. Gail’s photographs have been exhibited in many museums and galleries, including the Danforth Museum, Griffin Museum of Photography, Cassilhaus, PhotoPlace Gallery, and the Davis Orton Gallery. Her work is held in the permanent collection of the Danforth Museum and Cassilhaus. Gail serves on the board of directors of the Griffin Museum. 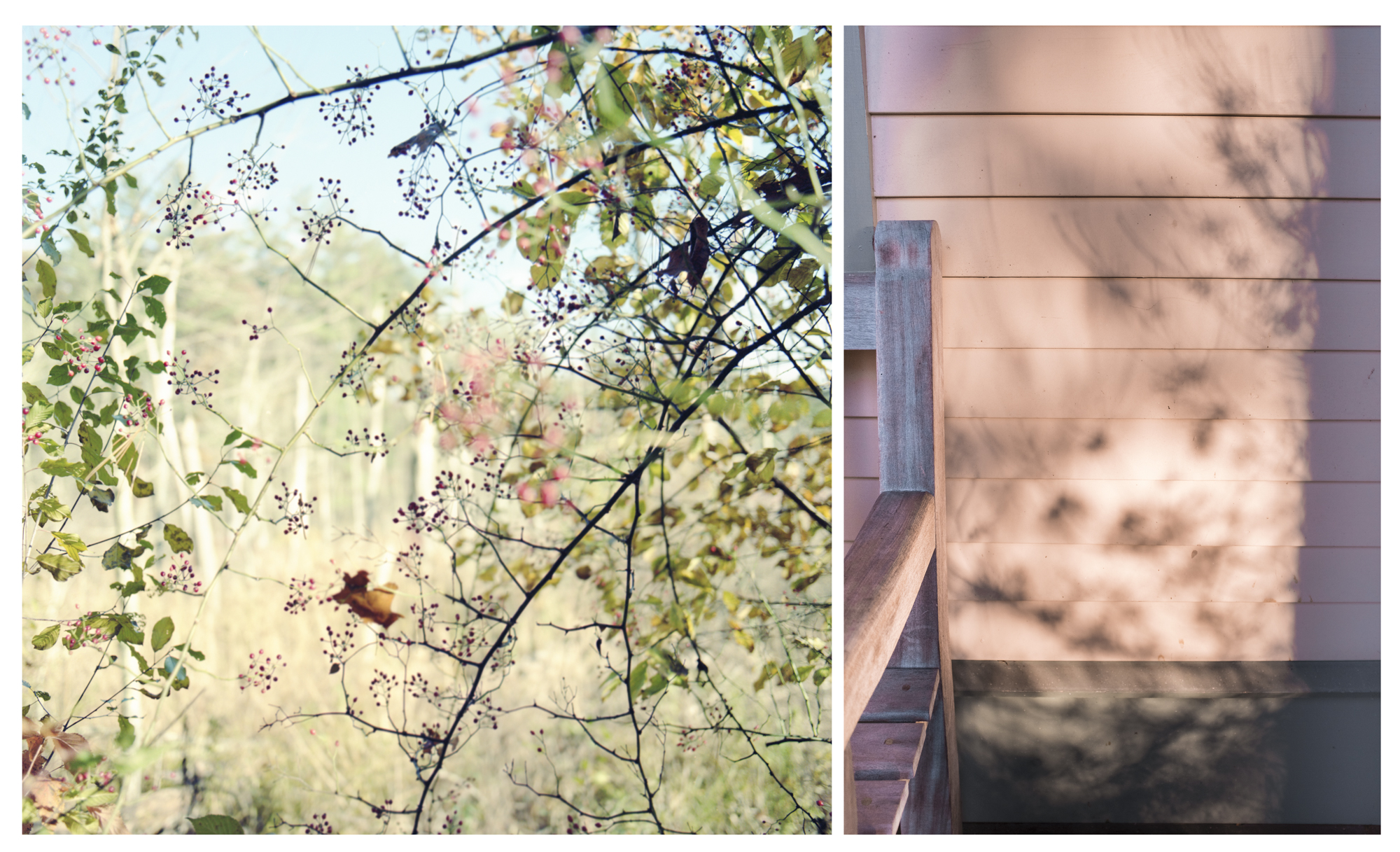 What prompted you to associate two different images and what process do you use in deciding which images to tether?

Pairing images came to me in an organic way one evening in a rare “Aha” moment. While working with prints from two separate projects, I sensed a strong connection between them. One project is about the New England landscape where I live in Sherborn and on Cape Cod in Massachusetts, and the other project, “Light House”, is about the shapes and patterns created by light passing through my house. I found that by joining an image from each of these two sets into one unified frame or diptych, I could merge the indoors and outdoors, creating small meditations on the interconnectedness of place.

When combining images for this work, I first look for a shared sense of color and light. In some pairings, in particular “Baby Oak” and “Winter Water”, there’s a predominant hue in one that is only hinted at in the other, but that small bit of color is crucial in the way they relate and “talk” to each other. It’s often the little details that make it work.

There are also complementary ways, secondary pulls, in how the two images relate: it may be in their disposition – one is calm while the other feels less settled; one image is minimal while its partner is complex; the lines and geometry in one may highlight the structure found in another such as in the case of “Tide Marker”; one image may feel flat while the other has a sense of depth. I don’t always see all the connections and relationships right away and I’m often thankful for my luck in how things pair up.

After making several initial pairs from my existing work, I became more intentional in making pictures specifically for this series. For example, if I have a new landscape I’m interested in pairing, I’m on the lookout for a good partner. But mostly I build up my collections of images from which to draw: landscapes I make using one of two medium format film cameras, either my Hasselblad or Holga; and photographs of the light in my house I make with my digital camera. 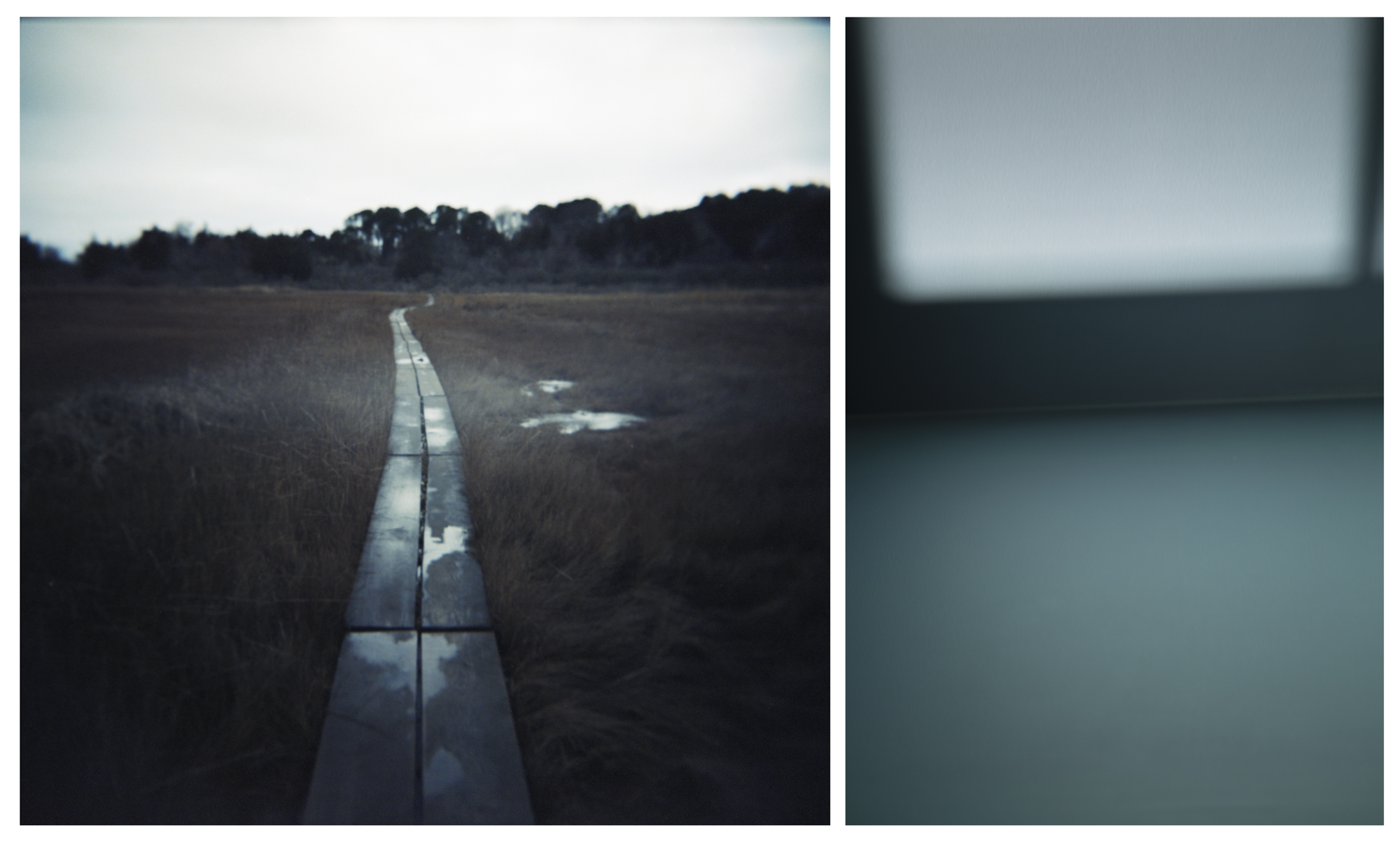 What is the additive power you see in combining two photographic works instead of showing the works as independent pieces?

Placing two images in one frame expands the possibilities of what each photograph might mean and allows me the opportunity to blend the inside and outside spaces where I live. Each pair tells a little story about my relationship to place. I want the viewer to see the connections between the two images, to notice things in one that might have gone unnoticed on its own, such as a pattern or the quality of light. Joining images can deepen the mood and introduce clues and new connotations. 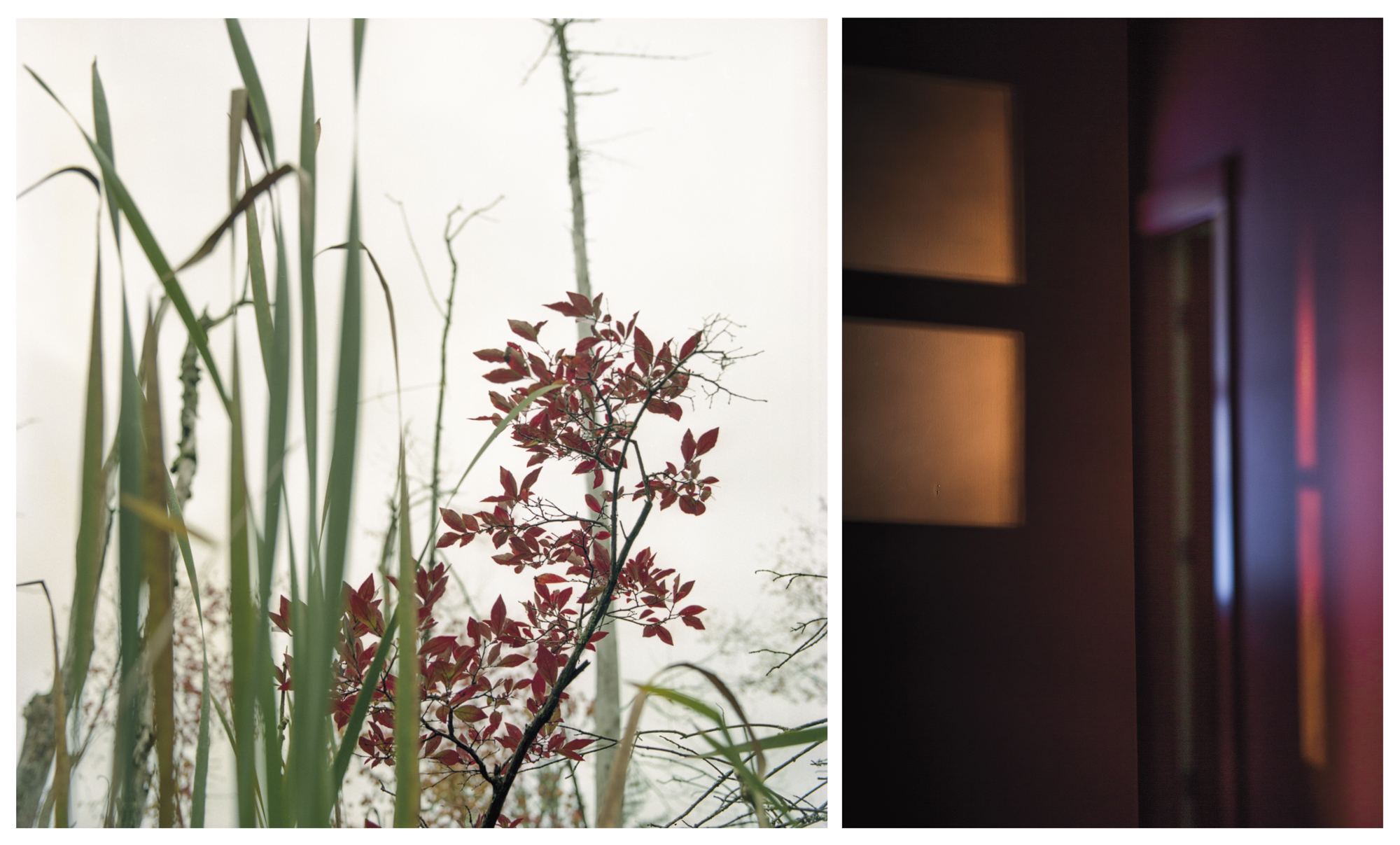 Diptychs and triptychs often convey a story line of some kind. What story or stories are you attempting to tell with this body of work?

Each pairing is a unique meditation about the interconnectedness of place, a visual conversation between the shelter and intimacy of home with quiet places I discover outside in the larger world. Light and color flow between both places as they do between my paired images. The images are from different places, but they form a consonant union. There’s a term in music, counterpoint, a relationship between two musical lines which are interdependent in their harmony yet independent in rhythm and melody. I love that and see a visual comparison when pairing my photographs.

“Passing Through” is also my ode to my home base of New England – my tribute to saltwater marshes, oak and pine forests, and the winding Charles River. The beautiful light here changes with each passing season which affects me whether I’m indoors or out. 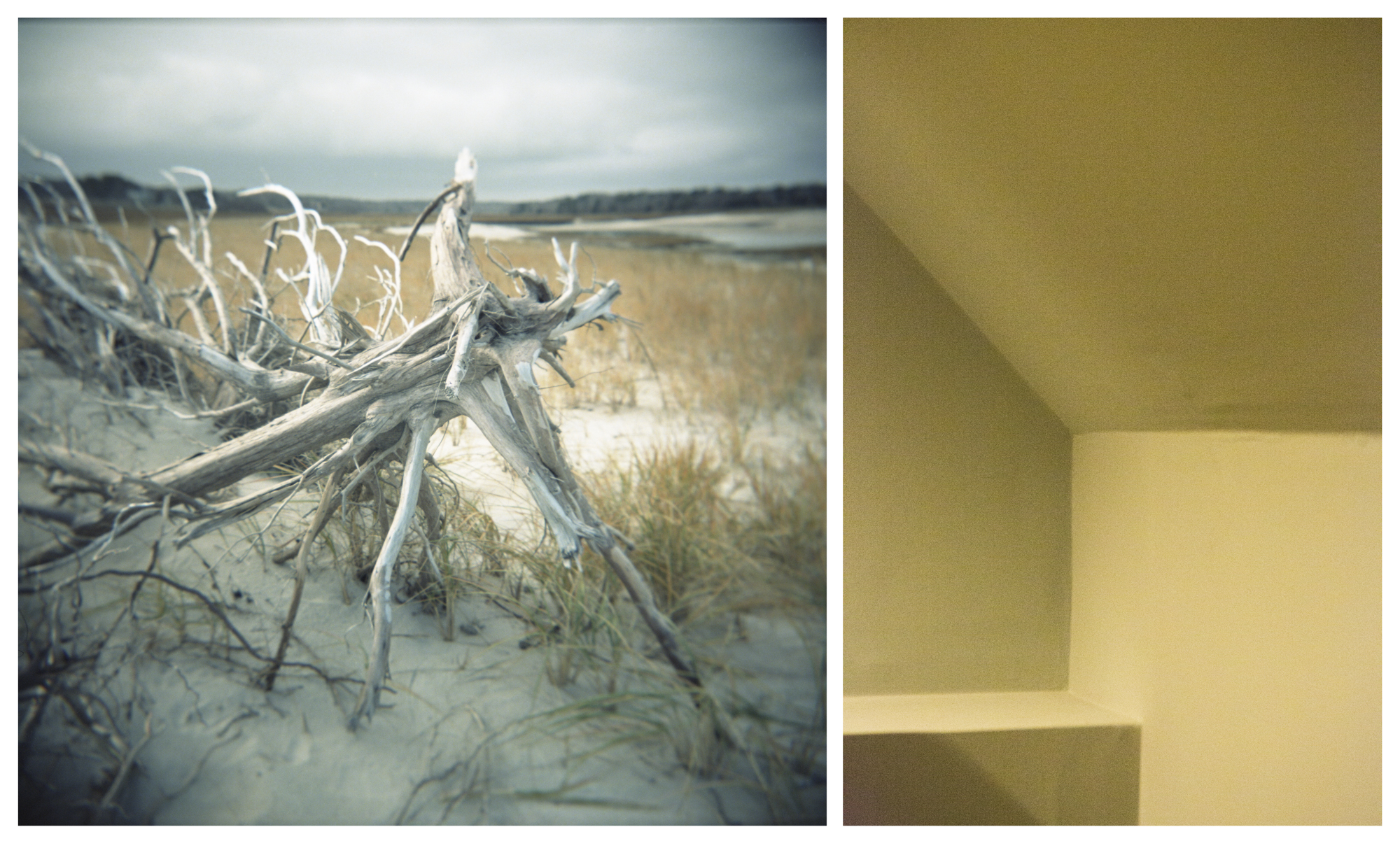 Your color palette in this project is quite varied. Is sequencing more of a challenge with diptychs than with a traditional series of images due to the exponential variety? How do you overcome this consideration?

The palette does vary from piece to piece from muted to stronger colors, but so do the seasons in New England, and so I like to think it’s consistent with my concept. In all my pairings, the way colors relate to each other are of primary importance. But in sequencing the work for an exhibition or portfolio, palette does become a significant consideration as there are some pieces that just don’t sit well next to each other.

I recently had the wonderful experience of showing this work at Cassilhaus in North Carolina. Cassilhaus is an incredibly beautiful artist residence and gallery space, owned and run by Frank Konhaus and his wife, architect Ellen Cassily who designed the house. The gallery has separate spaces and walls, and Frank curated the pieces so that some stayed together, while a few pieces stood alone. It worked beautifully, was a definite highlight in my artistic career, and I’m happy to say many pieces sold in that show, including one to the Cassilhaus permanent collection. 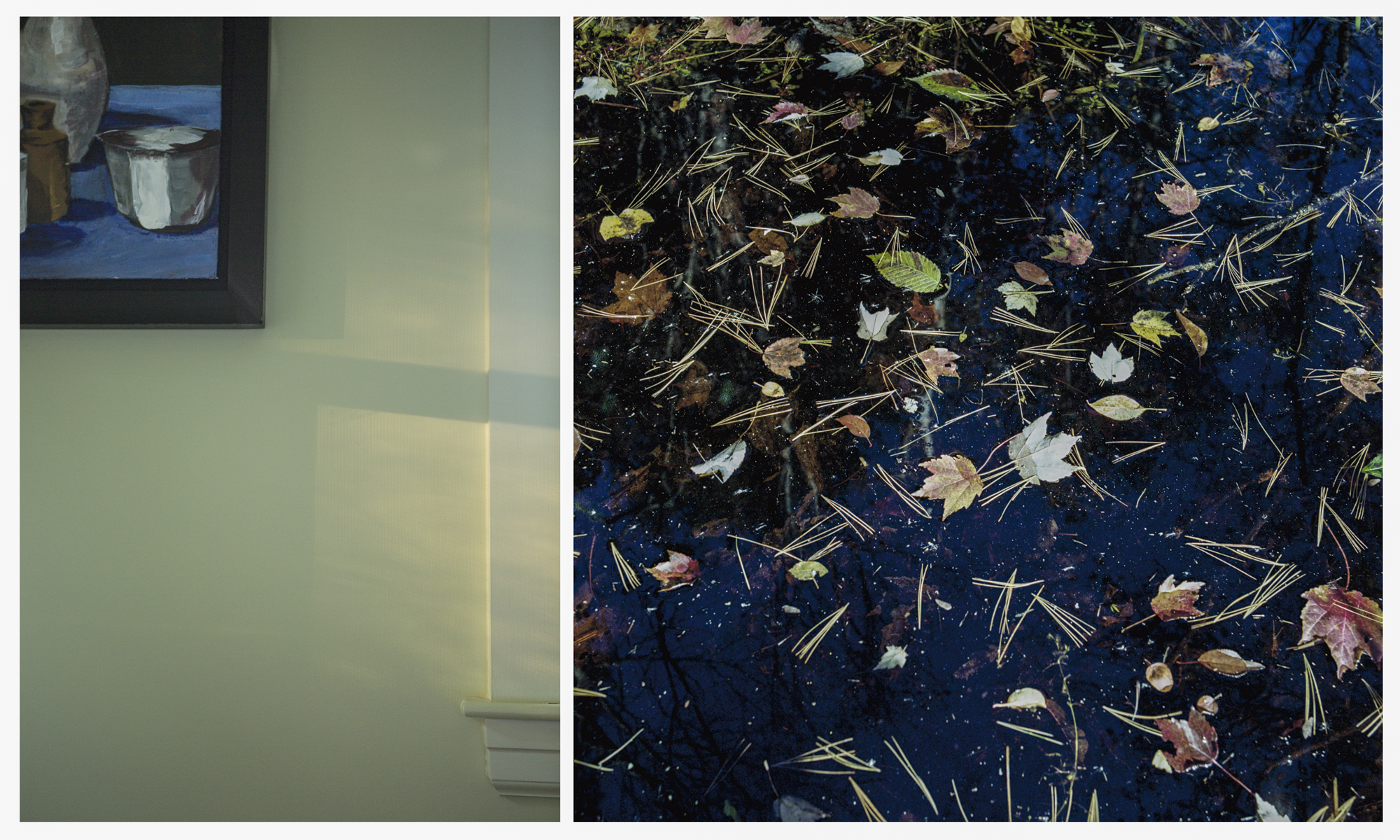 Do you plan to continue with the diptych form in your work or is this a unique experiment?

Making diptychs for “Passing Through” and showing them has been a total joy and I plan to continue to add to this series for as long as I find it compelling.

And I’m excited to share that I just had a brand-new triptych about domestic spaces accepted into a show about “light” at the A Smith Gallery in Johnson City, TX. I’m now inspired to make more triptychs. 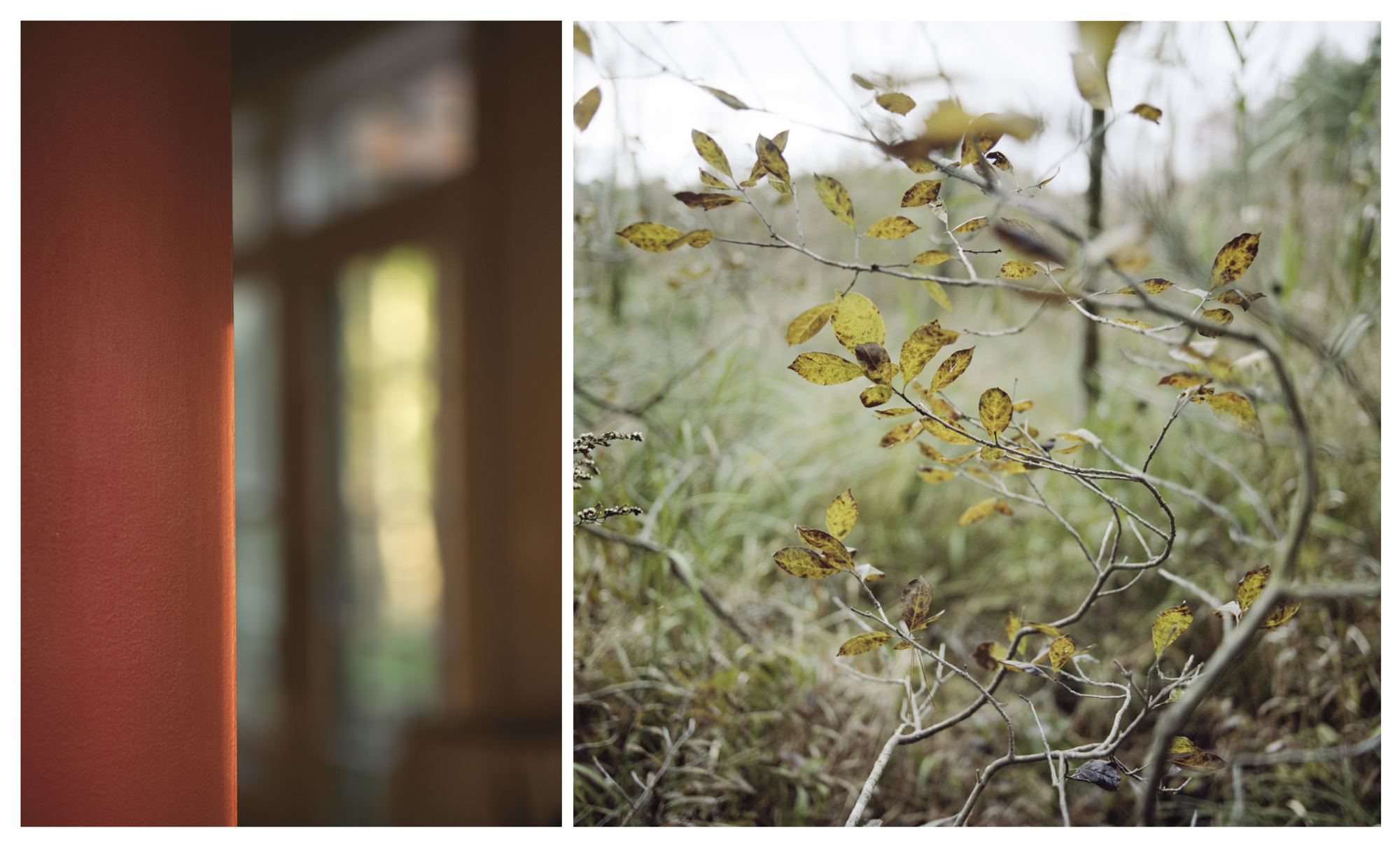 What advice would you give to an artist thinking about trying the diptych form in their work?

My main advice is to make prints! It’s hard to really get a feeling for how work looks on a computer. I’m a big fan of making physical prints on paper I love. I’m also a big fan of objects and like to see the image become an object, i.e., a physical print.

There is usually a consistent way each of us looks at the world and those themes are expressed and evident in our work. The trick is to notice them and perhaps understand their origin in our stories.

Be open to experimenting and playing and look for formal issues such as line, color, and light but also be on the lookout for a common theme or mood. Not all pairs will work, of course, but I can now usually tell a good one by how it makes me feel.

Also pay attention to the shapes of the images you combine. I pair a square film image with a vertical rectangle which comes close to being a golden rectangle, considered a very pleasing shape found in art and nature. 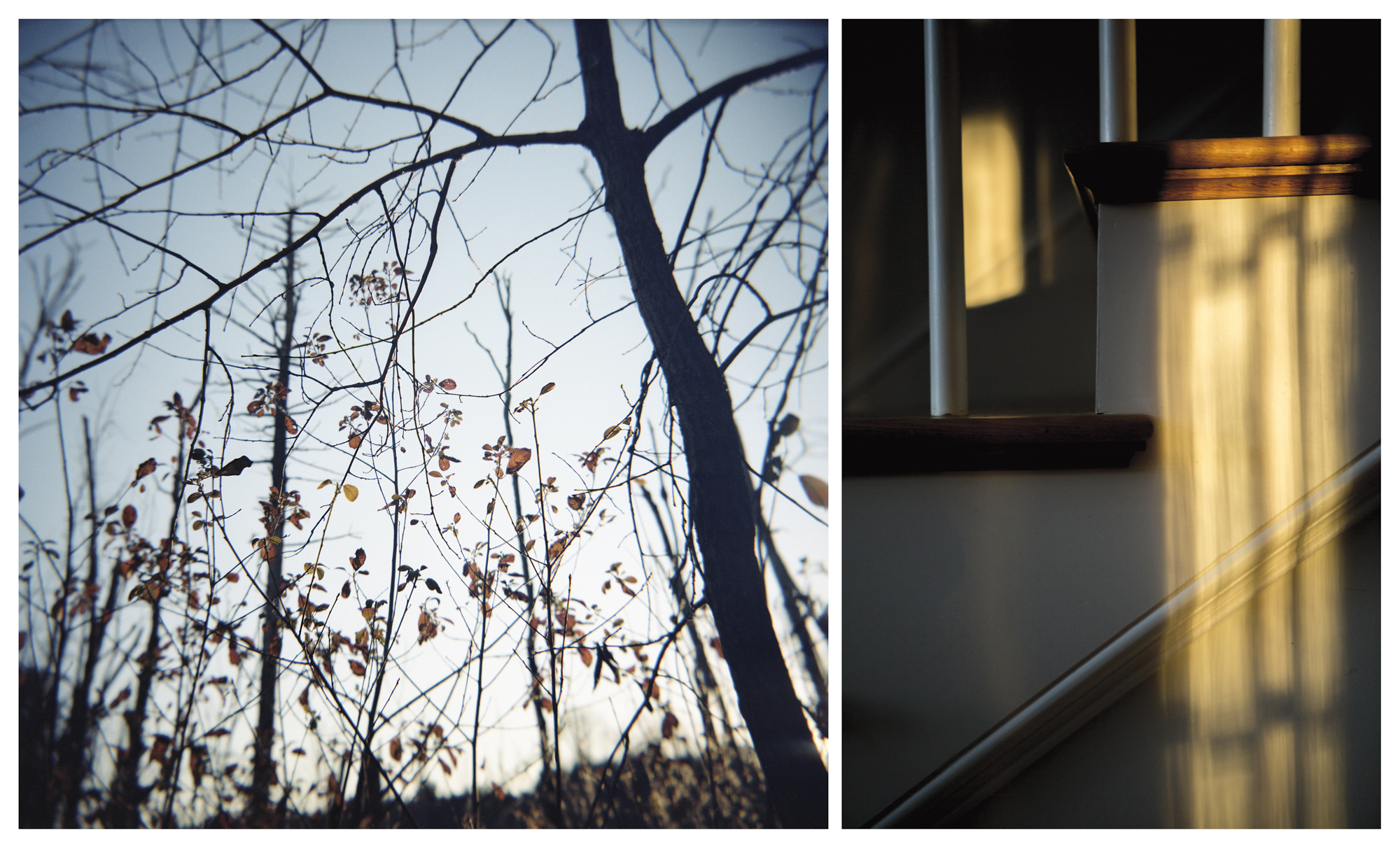 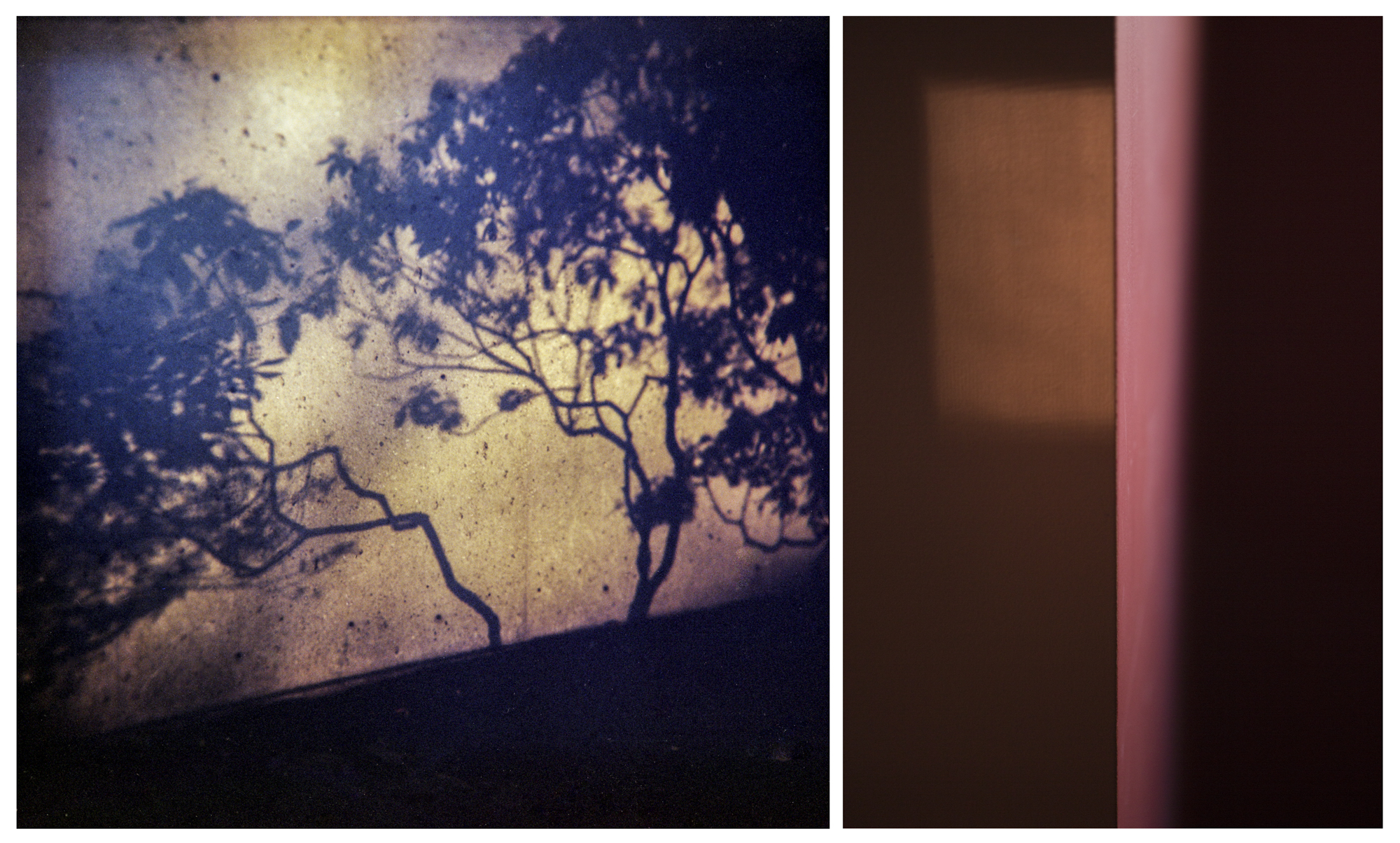 What’s next in your creative efforts?

I’m excited that “Grainlines”, my recently completed body of work, will be exhibited next month at the Rhode Island Center for Photographic Arts in Providence, RI as part of “Stitches in Time”, a five woman show curated by Emily Belz. In “Grainlines”, I celebrate the style and resilience of the women in my life by photographing details of the wear and repair of the dresses and accessories designed and worn by my mother and aunt. An opening reception is scheduled for February 17th.

One collaboration leads to another. My series “Grainlines” had its origins in my contribution to “A Yellow Rose Project”, a collaborative project designed and developed by Frances Jakubek and Meg Griffiths. I am so grateful to be included in this amazing project which inspired me to continue working on this series. “A Yellow Rose Project” invited over 100 women photographers to make work that reflects upon the 100-year anniversary of the ratification of the 19th amendment, granting women the right to vote.

I am also currently working on a portrait-based project chronicling my children raising their children. And I’m learning to make hand-made books – a whole other world of presenting and sharing photographs. 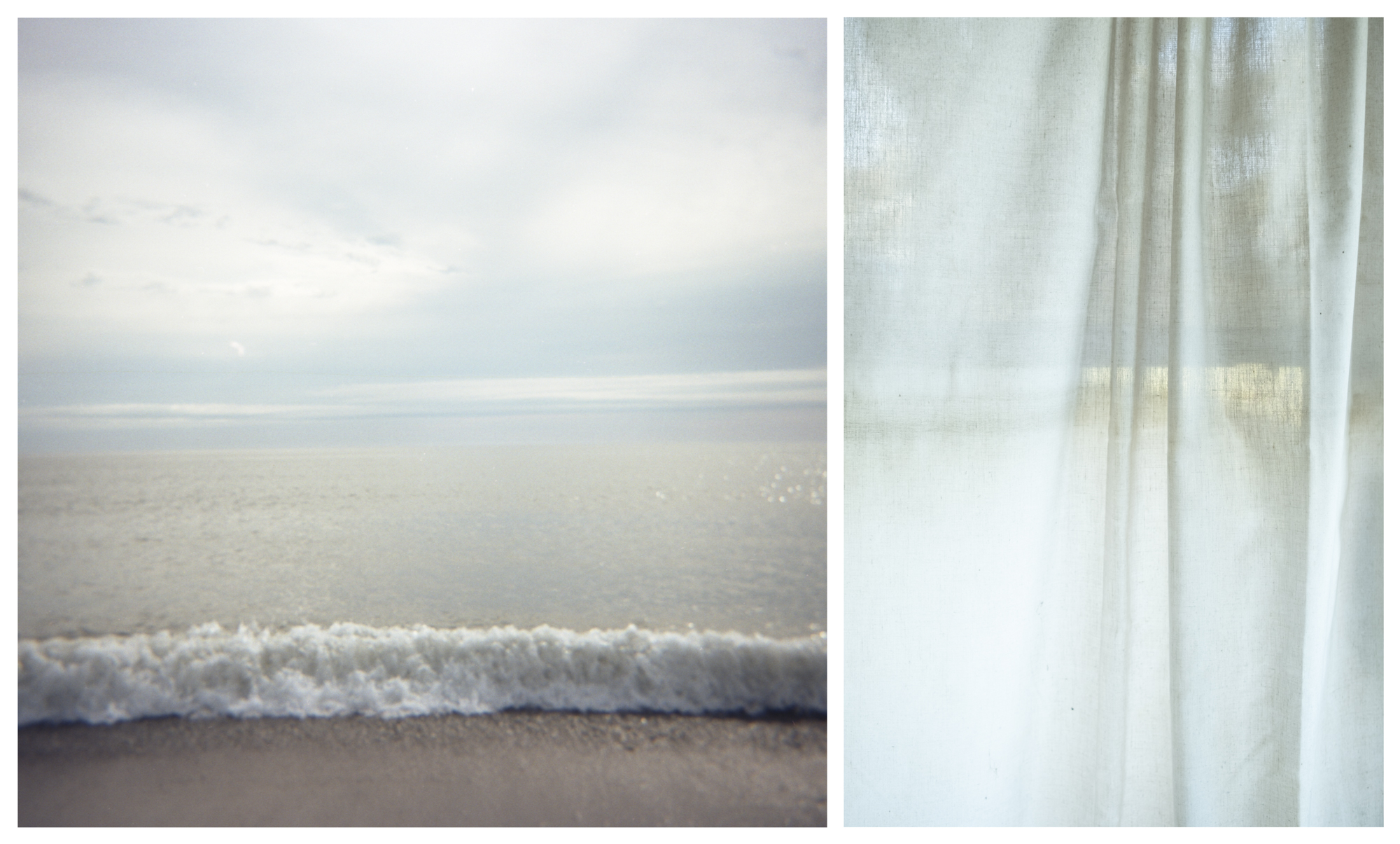 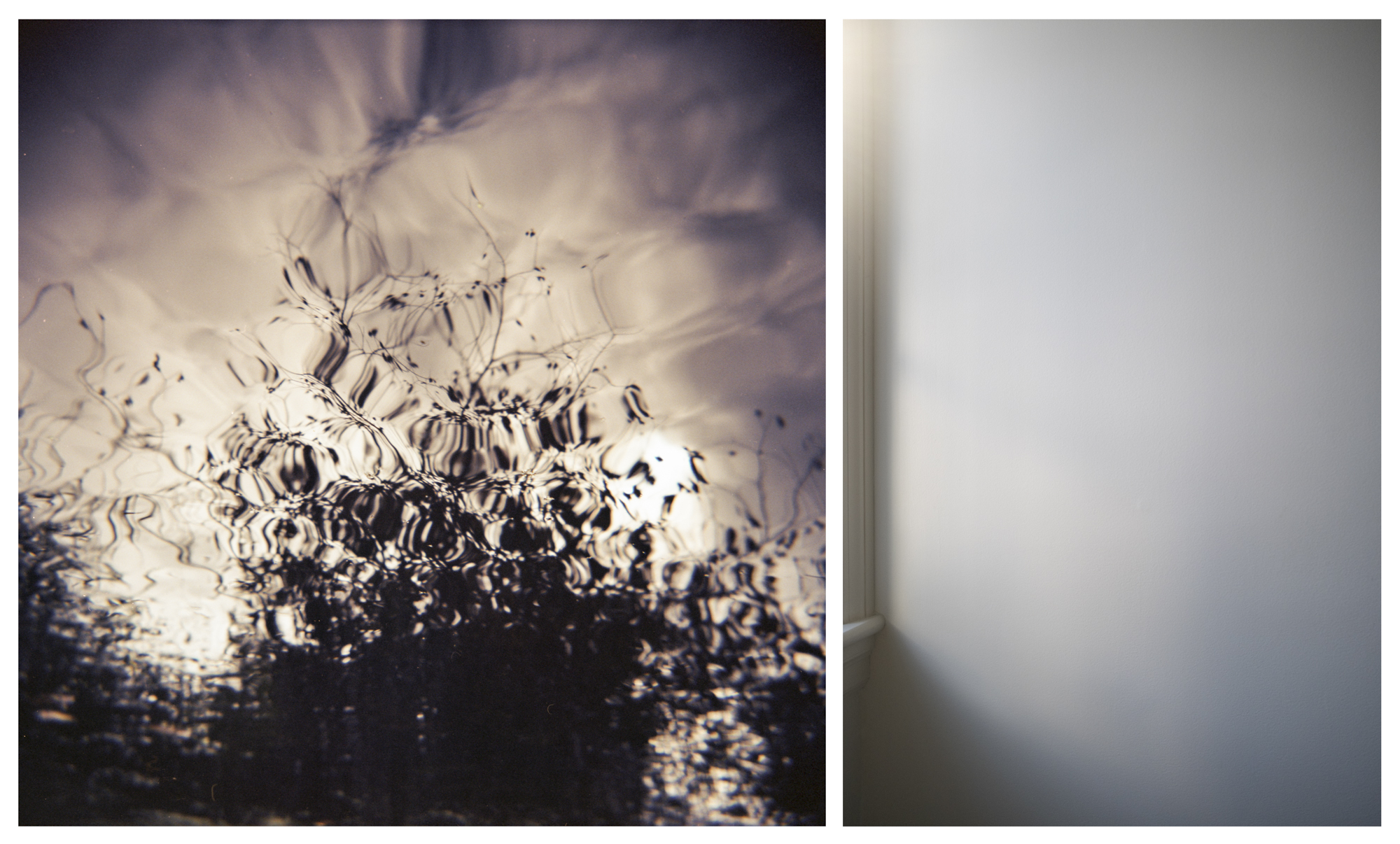 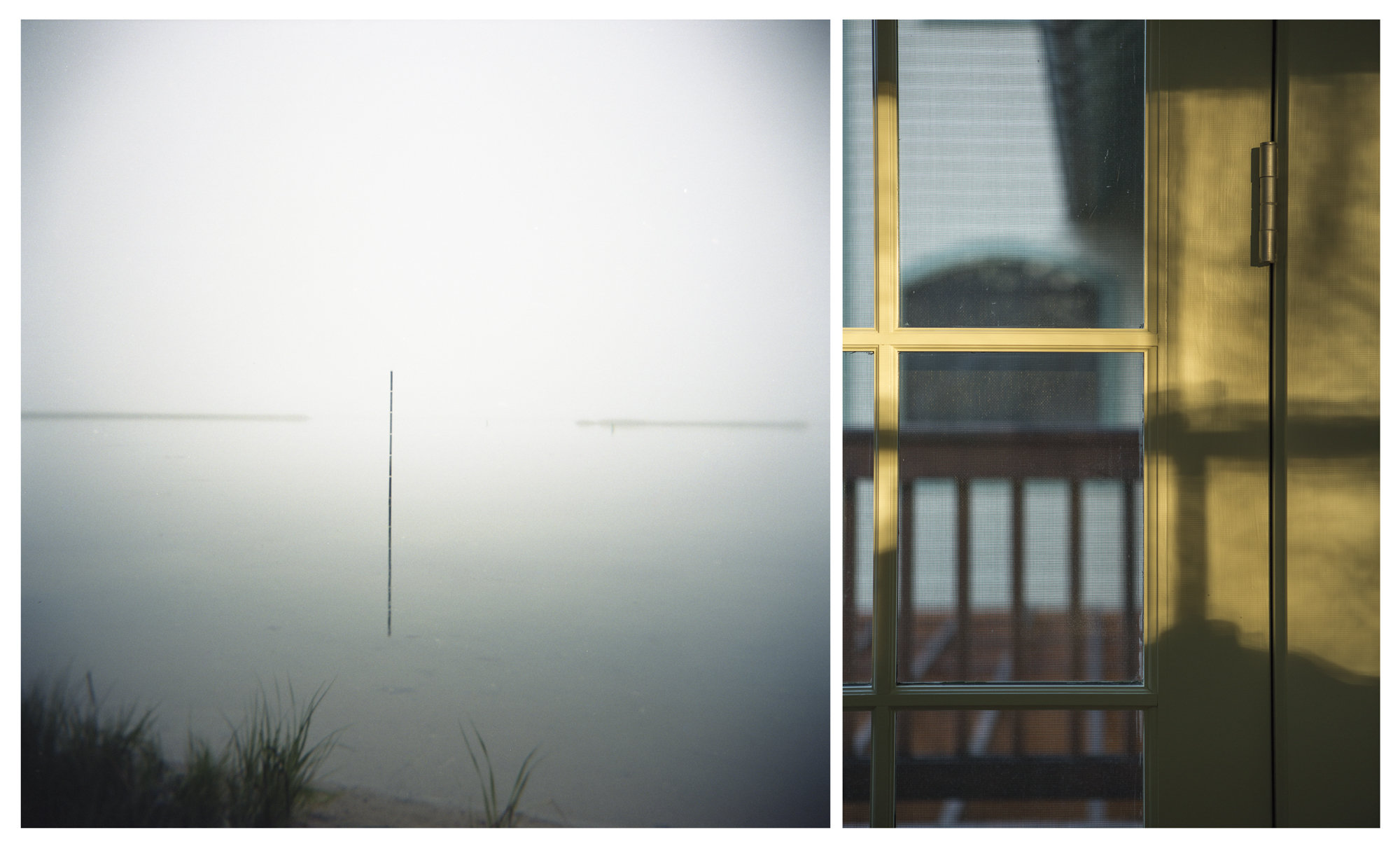 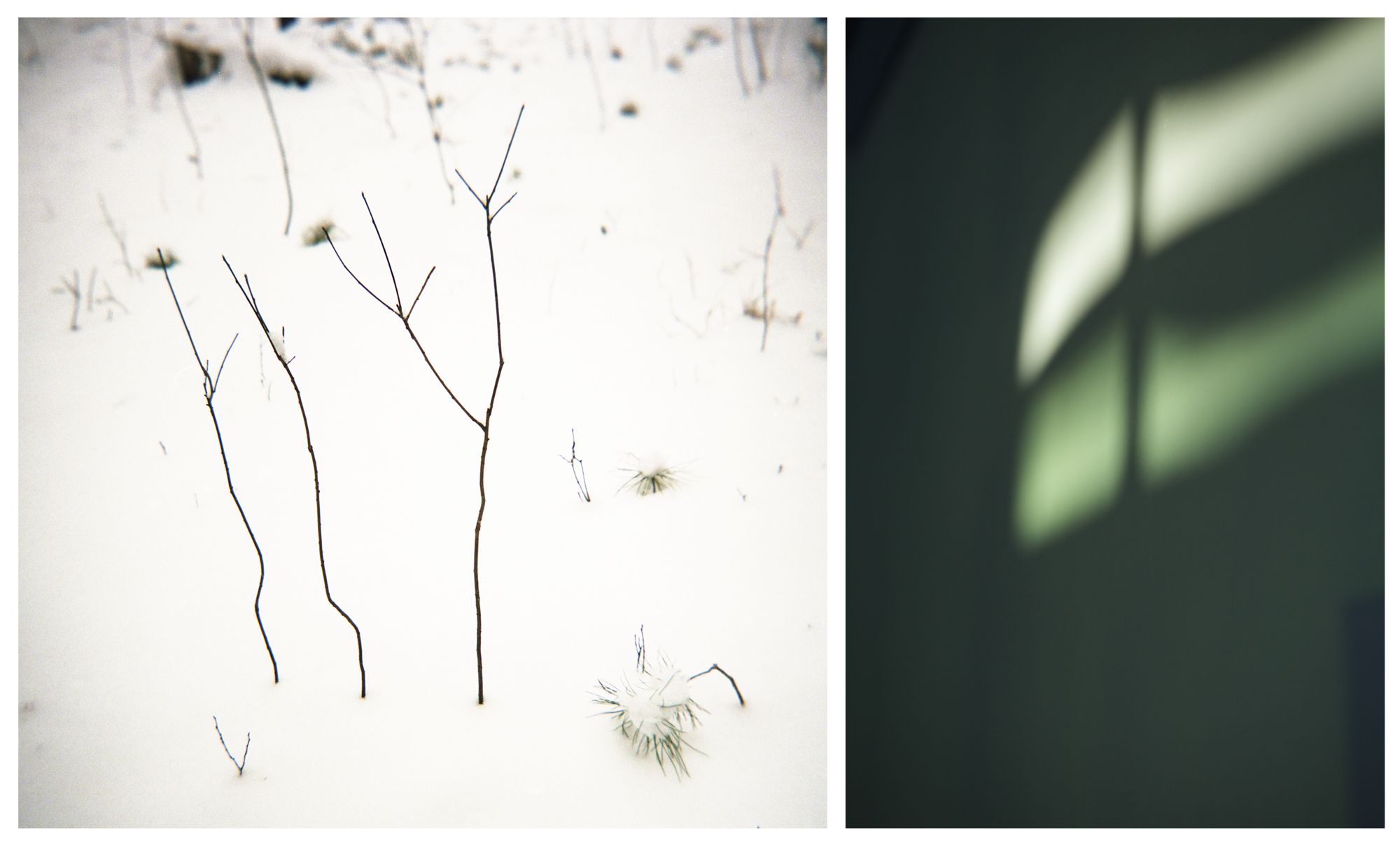 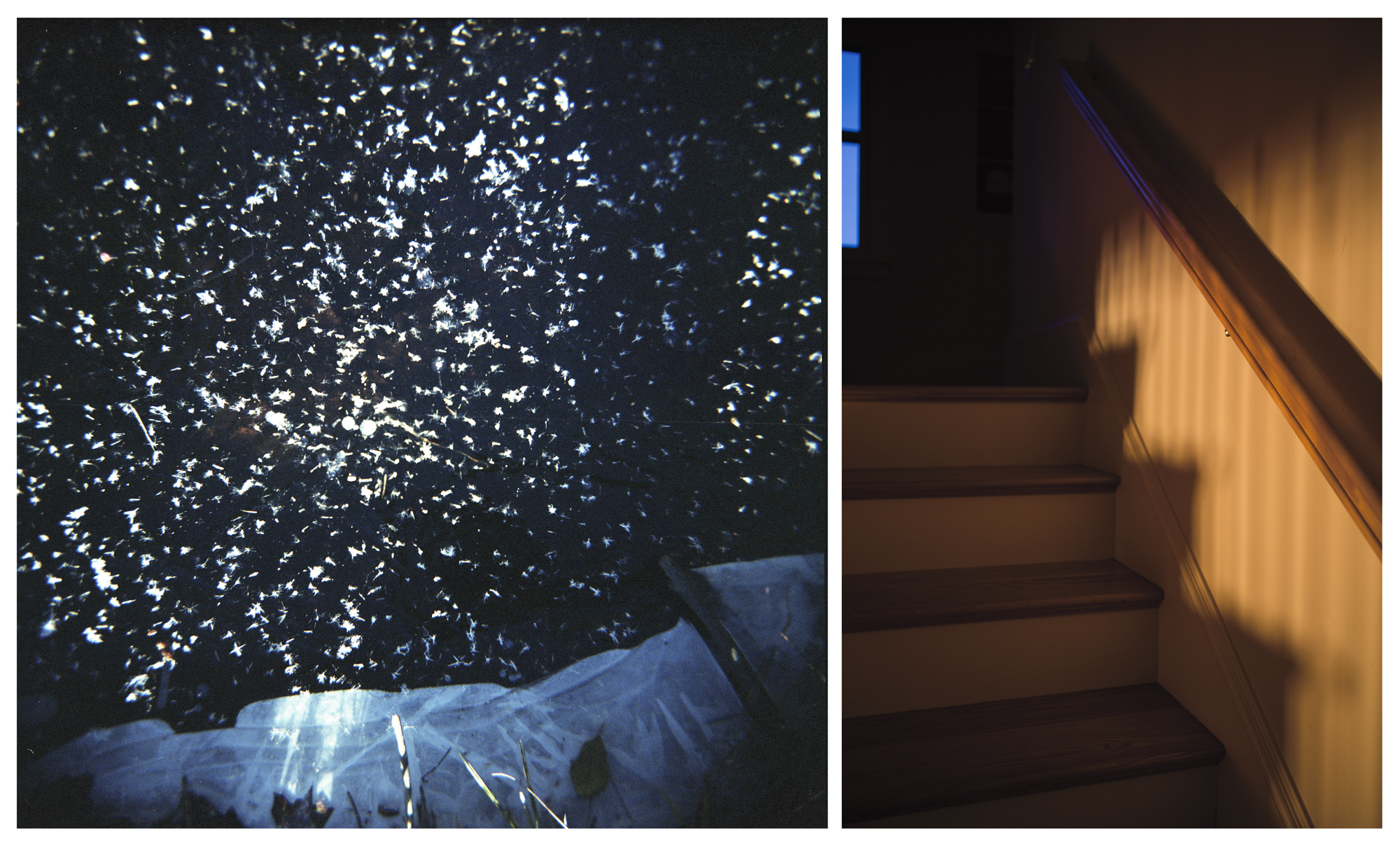 NEXT | Cédric Zuwala: Being and Dust: Dialogue of Matter >
< John Bernhard: Diptych | PREV