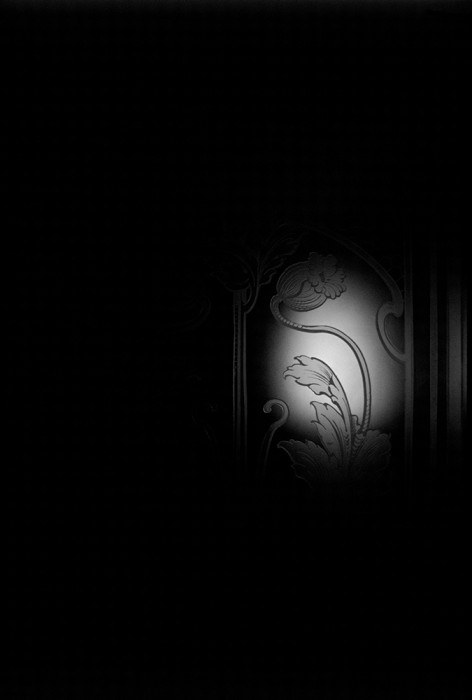 Window at my Grandparents’ Home, An original etched glass window of an opium poppy in the right hand door leading into a salon room at my grandparents’ home in Novi Sad, (Yugoslavia). They were killed on the doorstep of their home in a massacre in January 1942, along with my great-grandmother and great-uncle. Photographed in July 1984, Novi Sad, Yugoslavia ©Marissa Roth

Pulitzer Prize–winning photojournalist Marissa Roth is about to open a significant exhibition, One Person Crying: Women and War, at Venice Arts in Los Angeles from January 15 – March 12, 2015 with an Opening Reception on Jan. 17, 6-9pm. The project was captured on film over the course of 29 years and covering twelve conflicts, this global photo essay addresses the immediate and lingering effects of war on women. The exhibition is accompanied by an artist-led gallery talk on January 18th at 2pm, a documentary film screening series, and a documentary photography workshop taught by Marissa. The exhibition was curated by Howard Spector, Los Angeles, CA, co-director of the South Pasadena Arts Council (SPARC), an NGO consultant, and panelist for the National Endowment for the Arts and the US Dept. of Education.

Born and raised in Los Angeles, Marissa Roth is an internationally published freelance photojournalist and documentary photographer. She has worked on assignment for various prestigious publications including The New York Times, and was part of The Los Angeles Times photography staff that won a Pulitzer Prize for Best Spot News Coverage of the 1992 Los Angeles Riots.

Her work has been exhibited in solo and group exhibitions and a number of images are in museum, corporate and private collections. A commissioned portrait project by The Museum of Tolerance/ Simon Wiesenthal Center, to photograph the Holocaust survivors who volunteer there, “Witness to Truth,” is on permanent exhibition at the museum. “One Person Crying: Women and War” is currently a traveling exhibition.

“Infinite Light: A Photographic Meditation on Tibet” is also a current project, and the book – with a foreword by His Holiness the Dalai Lama – was released in April 2014. She has 3 additional books to her credit, “Burning Heart: A Portrait of The Philippines”, “Real City: Downtown Los Angeles Inside/Out”, and “Come the Morning”, a children’s book about homelessness. Marissa Roth is based in Los Angeles and Arizona. 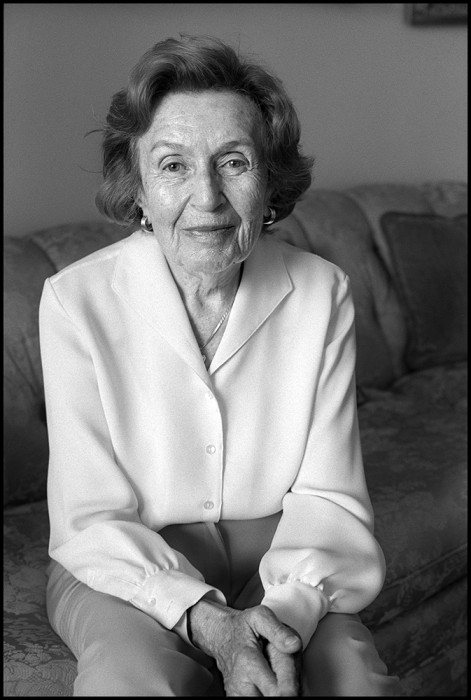 Holocaust Survivor Cathy Weiss, Holocaust survivor Cathy Weiss was born in Satu Mare, Romania to a Jewish-Hungarian family. They were forcibly taken to the concentration camp at Auschwitz, where she stood face to face with Dr. Josef Mengele. Photographed at her home in West Los Angeles, August 11, 2008 ©Marissa Roth

One Person Crying: Women and War

“My grandmother left the light on for me. I know this in my heart even though I never met her. She was murdered on the doorstep of her home in Novi Sad, Yugoslavia, along with her husband, her mother, and her brother, on a freezing January day in 1942, because they were Jewish. The light came through a window that had opium poppies etched delicately into the glass, on one side of a set of double doors leading into a salon. Its partner in the other door was plain, an obvious replacement for something that was lost. The first time I saw this window was in the summer of 1984 on a day-long family pilgrimage to Novi Sad, which bore my father back to his childhood home for the first time since he had fled Yugoslavia in November of 1938, at the age of 26. Though I didn’t know it, a 30-year odyssey began for me that same day.”—Marissa Roth 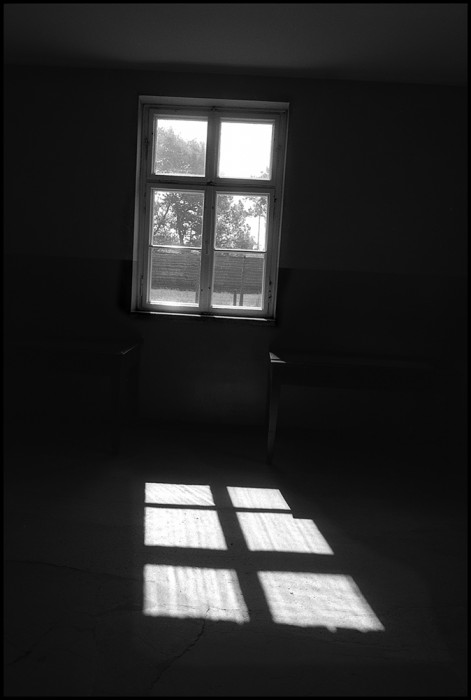 Auschwitz Barrack Window, View looking out of a barrack window at Auschwitz. Over a million and a half Jews were killed in the concentration camps of Auschwitz-Birkenau. Many of them lived in the Auschwitz barracks, originally built as a Polish military base before the war. Birkenau, as few miles away was purpose built as a concentration camp. Auschwitz, Poland, May 10, 2008 ©Marissa Roth

When humanity is betrayed by madness, war often follows. This project has been about my reconciliation of man’s need for war and the inadvertent upheaval imposed on the women who are directly affected by it. The slow-burning post-war truth that I have learned, is that in the end, war shows up men’s weaknesses and women’s strengths. For men, bravado doesn’t yield easily to admissions of loss or the failed ability to protect their own. Natural caretakers, women pick up the pieces regardless, turning broken lives into replanted gardens. The bridge of anguish is crossed innumerable times from both sides, yet the perspective is always different because of gender roles, cultures and historical context. 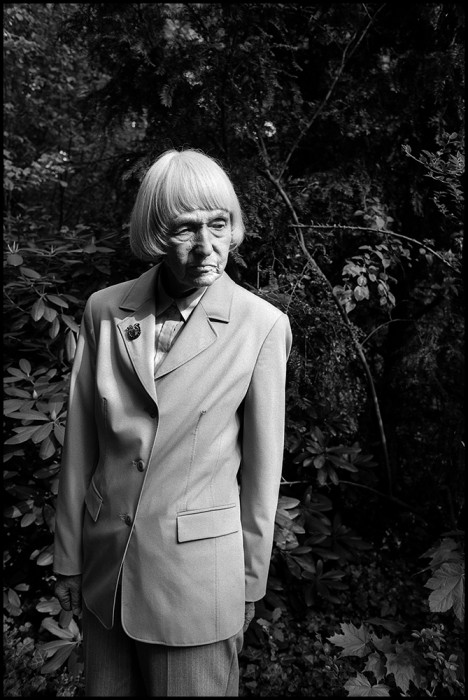 Ilse Kleberger, Dr. Ilse Kleberger, aged 87, born in Pottsdam and survived World War II in Berlin. She was raped during the Siege of Berlin immediately following the end of the war. After the war, she became a prominent physician and the author of 32 books. Photographed at her home in Berlin, Germany, May 2008 ©Marissa Roth

I naively believed that war and peace were black and white sociological options. Gradually over the course of this 30-year project, which mirrored the arc of my own maturation process, my world-view palette shattered into a hundred shades of gray. Refusing cynicism, I learned that war and peace are just words, that in fact it is the invisible thin line between civilization and anarchy, tolerance and intolerance – between 2 people, then 10 people, then a thousand people, then a million people, that predicates constructive coexistence. 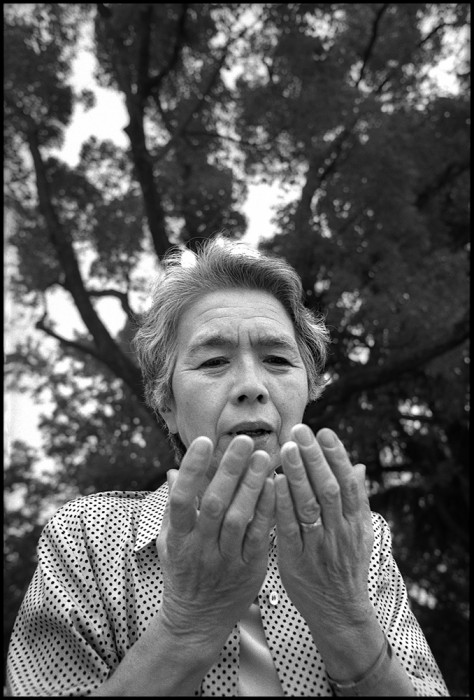 I’ve read the story of war through the faces of every woman I met on this project. Their eyes became words strung together in sentences of suffering, imprinted onto sheaths of tears bound together by a common experience, where neither time nor place matters. What matters profoundly to many of them is the universal knowledge that other women, who also survived war, share the same tragic secret of what it feels like to have lived through it. 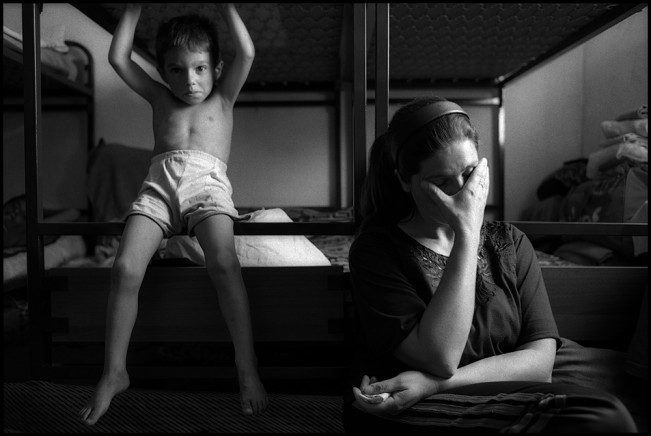 Sebanate Berisha and a Boy, Sebanate Berisha, a Kosovar Albanian refugee who lost all of her children in a night-time bombing raid in Kosovo, at a refugee center with an unidentified boy. Tirana, Albania, 1999 ©Marissa Roth 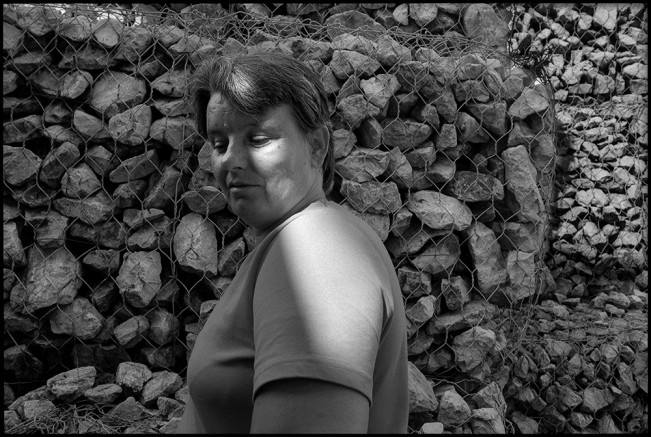 Safeta Ajanovic, Safeta Ajanovic, 42, a Bosnian Muslim, she was raped in 1992 by Serb soldiers. Impregnated by the rape, she fled to the forest for 4 months and miraculously made her way to Tuzla where she gave birth to her son Mirza. Her parents refused to acknowledge the child, and so they lived apart – she with her parents and her son in an orphanage – until he was 7 years-old. It was only after her parents died of natural causes in 2000, that she was able to be reunited with him and they now live together. Photographed on May 19, 2009, Tuzla, Bosnia and Herzegovina ©Marissa Roth 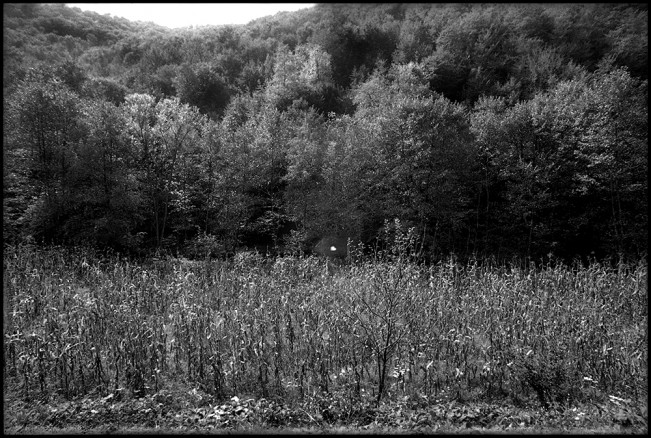 Cornfield Growing on a Mass Grave Site, A cornfield now grows on the site of a former mass grave in Srebrenica municipality where some men and teen-age boys were killed and buried during the Srebrenica massacre of July 1995. Bosnia and Herzegovina, September 26, 2009 ©Marissa Roth 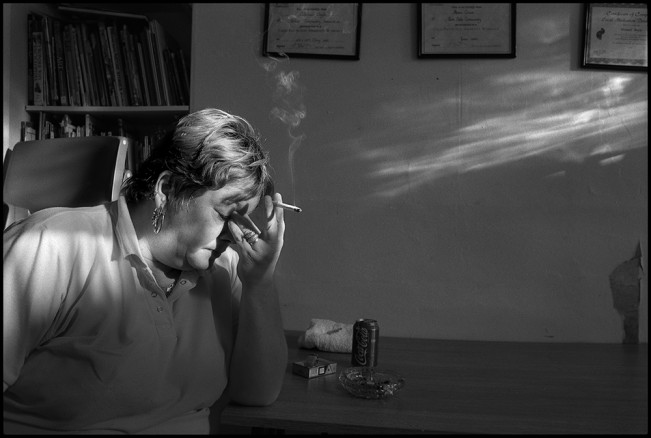 Alice McNally, Alice McNally, 45, is a Catholic mother of 11 children, who lost 5 of them at a young age, and has lived in North Belfast her whole life. This area of the city has been one of the most violent, known as an interface, it straddles both Catholic and Protestant communities and continues to sustain Sectarian strife. Photographed in Belfast, Northern Ireland; October 2006 ©Marissa Roth 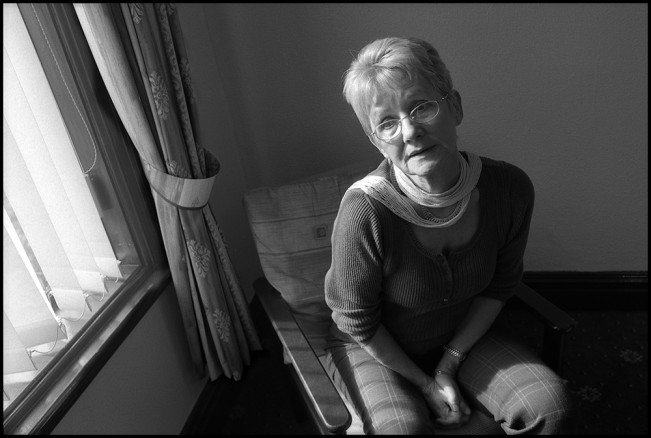 Mina Wardle, Mina Wardle, a Protestant woman who started the Shankill Stress and Trauma Group a number of years ago, in order to help local women cope with their losses and the sectarian violence. Belfast, Northern Ireland. October 2006 ©Marissa Roth 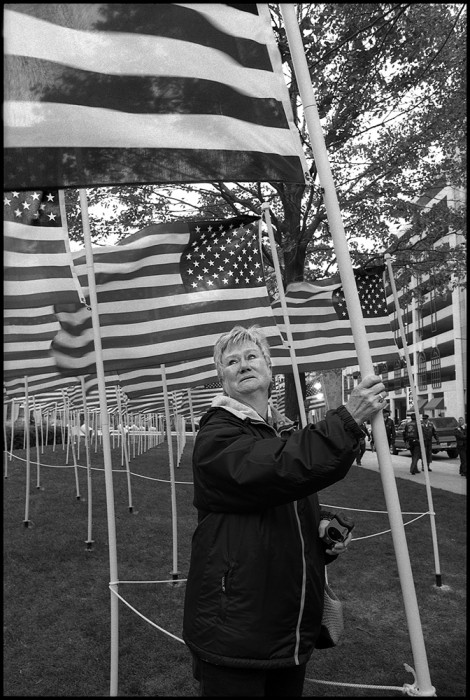 Beckie Dixon, Beckie Dixon, whose son Christopher was the youngest Marine killed in Iraq in August 2005. He had just turned 18, a few months earlier. Photographed on Veteran’s Day, with his memorial flag, in Columbus, Ohio ©Marissa Roth 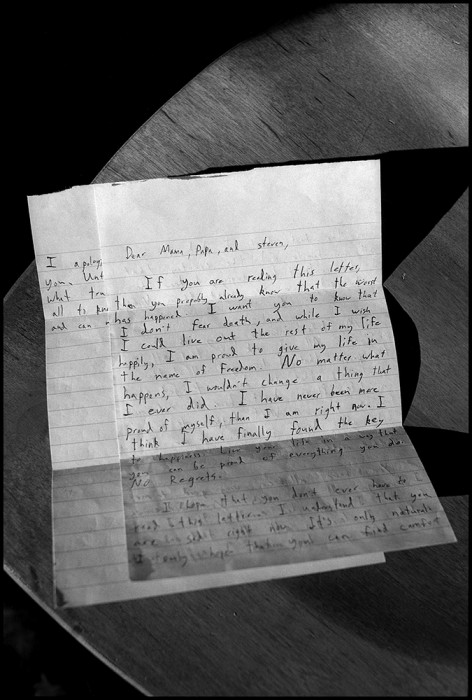 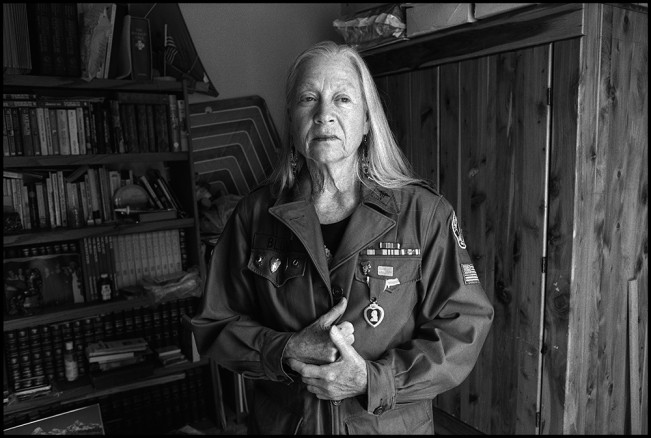 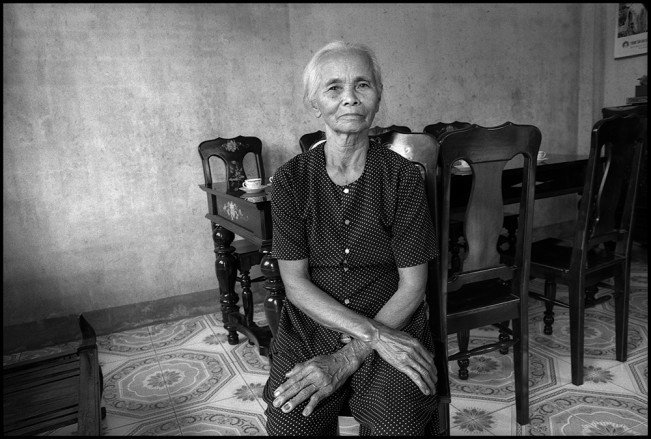 My Lai Massacre Survivor Pham Thi Thuan, Pham Thi Thuan, now 74 years old, along with her 2 young daughters, survived the My Lai Massacre in Vietnam, on March 16th, 1968, when the 11th Infantry Brigade of the American Army received an order to kill all civilians there. Photographed in Son My, Vietnam in March 2012 ©Marissa Roth 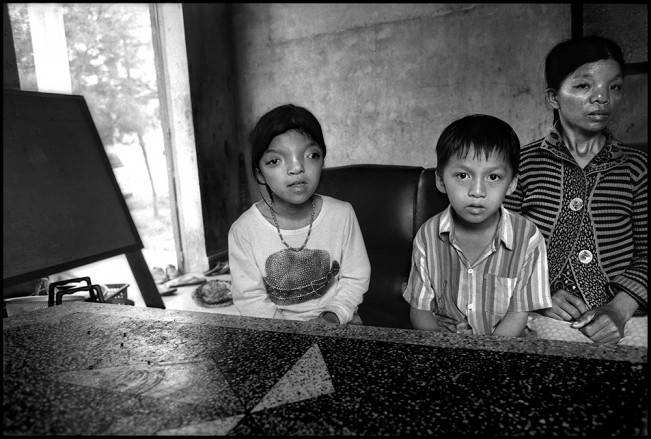 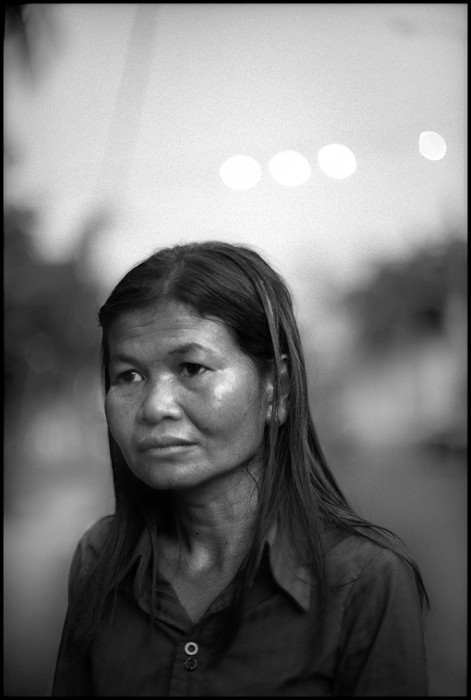 Genocide Survivor Nuk Nimny, Earlier on the same day that this photograph was taken, Nuk Nimny had been part of one of the Victims Groups being represented at the first international genocide tribunal that started on February 17, 2009. Born in 1972, this was the first she had ever been in Phnom Penh, and had lost her father and 2 sisters to the genocide. Phnom Penh, Cambodia, February 18, 2009 ©Marissa Roth 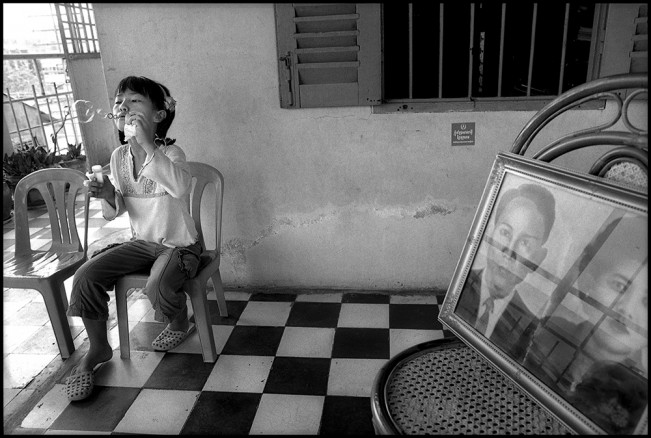 Two Generations Separated by Genocide, Dy Ratha, was considered privileged before the Pol Pot regime came to power. Soon after the occupation of Phnom Penh, her husband was decapitated and her mother died from an untreated illness, and her father was killed. She fled into the provinces and eked out a living to support her 5 young children by selling textiles. She is now an ardent political activist. Here, one of her granddaughters, Sobon Rath sits on the terrace of her home near to photographic portraits of her parents taken before the war. Phnom Penh, Cambodia, February 2009 ©Marissa Roth 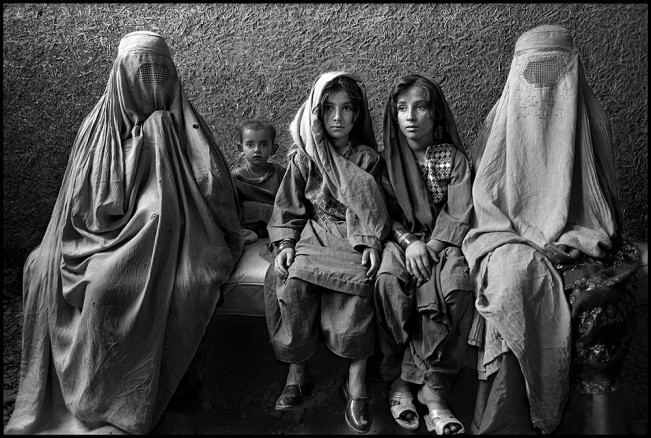 Afghan Refugee Women and Children, At the end of the 10-year war between Afghanistan and the USSR, there were an estimated 100,000 Afghan war widows. Countless people were displaced and living in refugee camps along the border in Pakistan, including this girl and woman. Photographed in Peshawar, Pakistan, September 1988 ©Marissa Roth 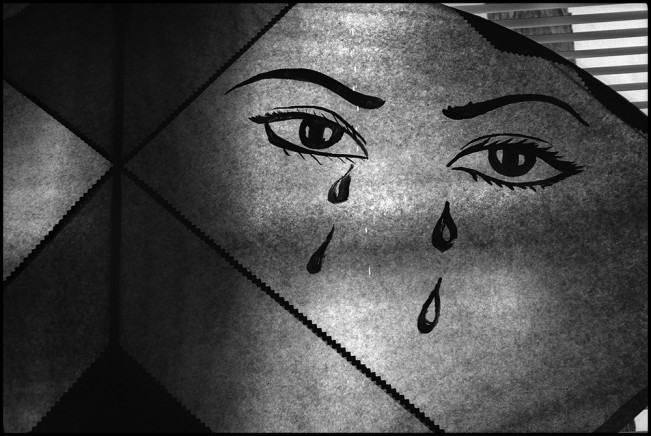 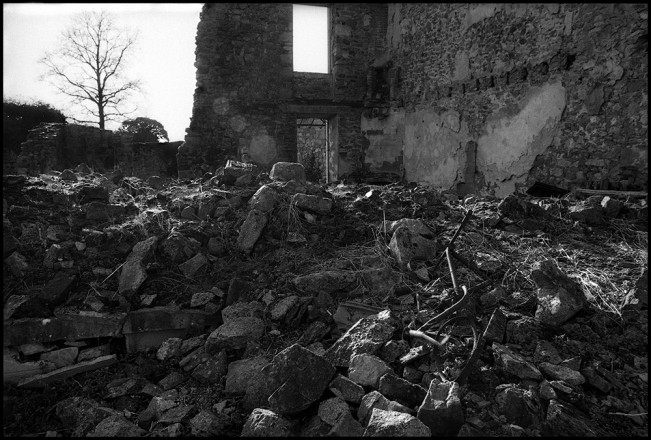 Oradour-sur-Glane Ruins, Oradour-sur-Glane was a small French town that sustained a brutal massacre of 642 men, women and children on June 10, 1944. The ruins of the town are still there as a monument to the victims.This image shows rubble with a burned and bent bicycle. Photographed in March 2013. ©Marissa Roth

Death doesn’t chose sides, but choosing life after war is quite another matter. A number of the women I met around the world gained impossible strength from their heartache and losses and turned their gaze towards activism, advocating for social justice, peace and teaching tolerance. Their process was not always immediate or easy but came to them slowly as they faced post-war hardship, and healed physical and psychological wounds. I have tried not to take sides in illuminating a conflict, but rather chose to highlight women from all sides in order to tell the story of that particular war. The words are the same whether spoken in Belfast or Bosnia, in English, Hungarian or Cambodian. The women I chose to feature here include activists and the unknown, reflecting the spectrum of women who embody ferocious spirits and quiet strength. Each in their own way chose life and made an indelible impression on me. Text © Marissa Roth

NEXT | Joshua Schaedel: So Where Do We Go From Here? >
< Laura Letinsky: Ill Form & Void Full | PREV