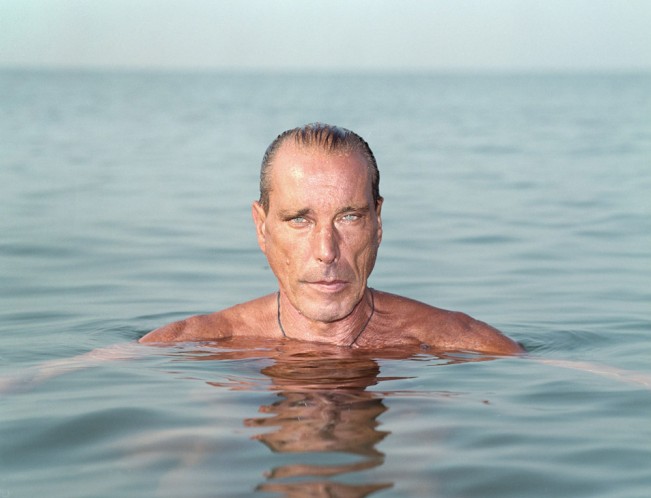 Creating a unique portrait is not easy, but German photographer, Albrecht Tübke, uses found environments to offset his subjects.  Albrecht has several portrait portfolios and today I feature two: Heads and Citizens, both which isolate the figure that while shot on a location, create a typology of faces.  For his series Heads, a pale blue ocean isolates faces completely with a natural reflector.

Originally from Leipzig, Germany, Tübke trained at the Academy of Visual Arts, Leipzig before completing his MA at Guildhall University of London. His work has been included in numerous prestigious exhibitions in Europe, including Animalism at the National Media Museum in Bradford;  How We Are: Photographing Britain at the Tate Britain, Zeit Raum Bild at the Historisches Museum Frankfurt; and New Photographers 2006 at Antwerp’s Museum voor Fotografie. His work can be seen in the public collections of the Victoria and Albert Museum, London; La Maison Européenne de la Photographie, Paris; Museum Folkwang, Essen; Centre National de l’Audiovisuel, Luxembourg; and the National Media Museum, Bradford. 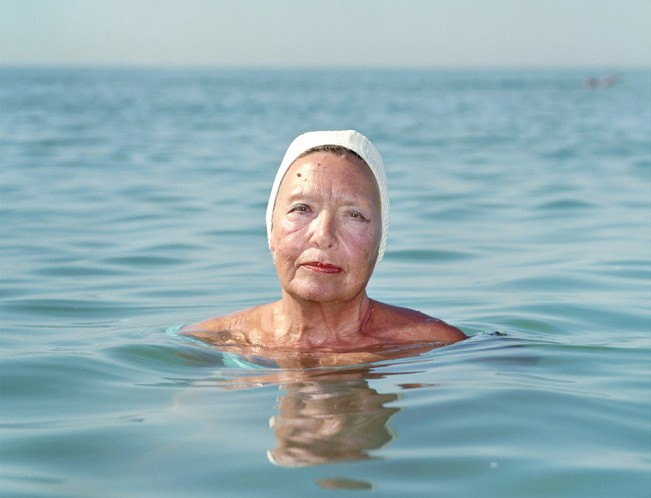 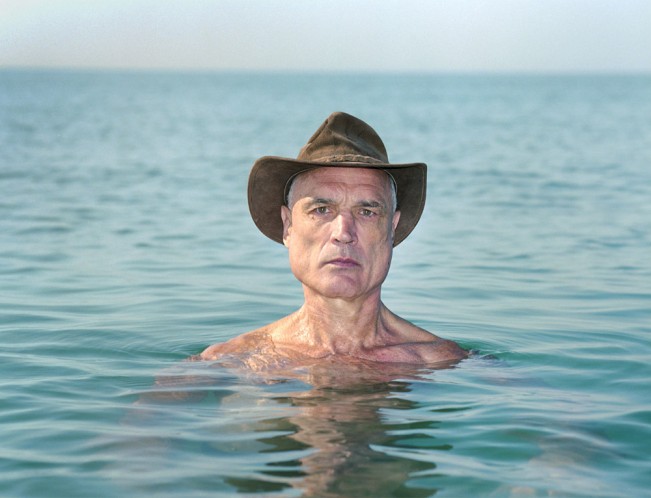 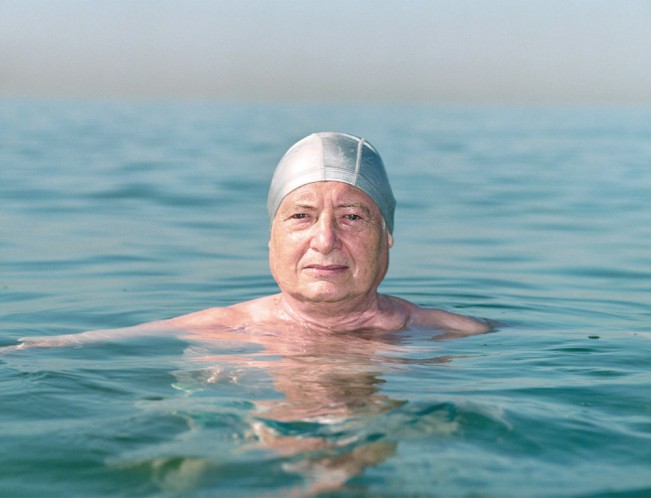 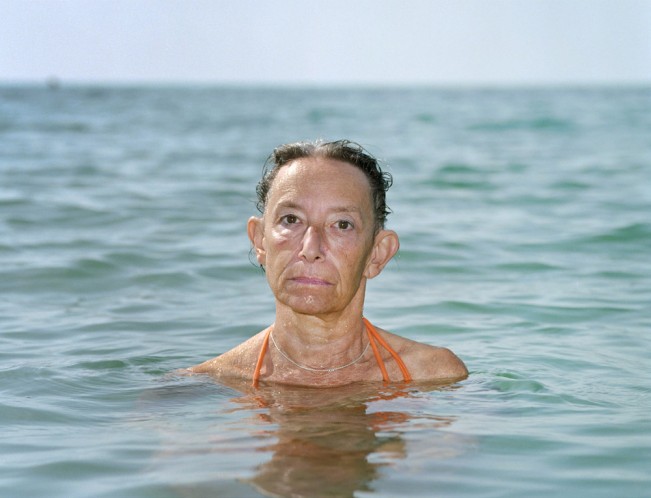 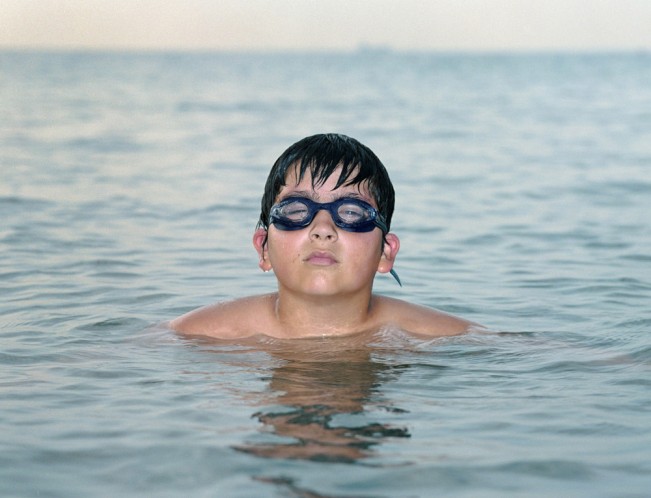 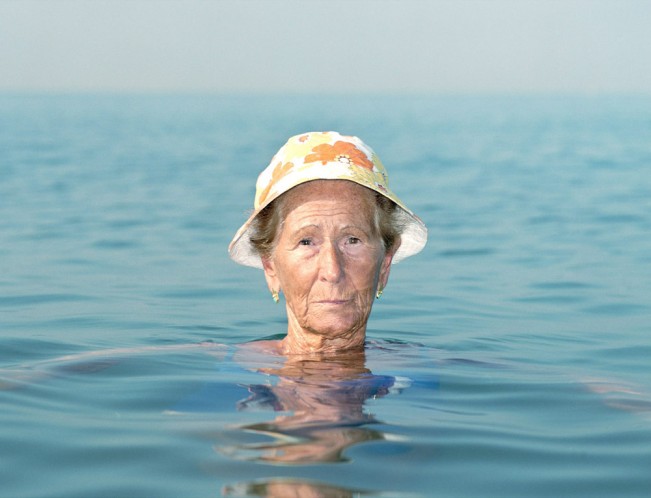 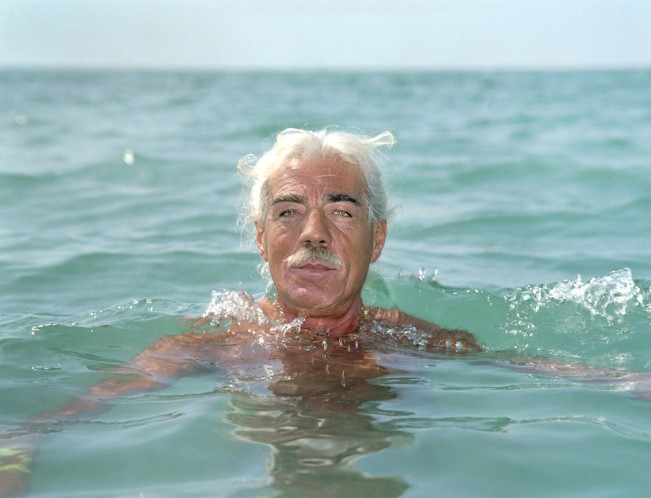 Dandies against a Concrete Wall

by Val Williams is a writer and curator, currently Research Fellow at the London

When Albrecht Tübke began to photograph people he encountered in the cities of Europe and the USA, he became part of a long tradition of documentary portraiture. Like his illustrious forebear August Sander and more recent practitioners such as Judith Joy Ross and Rineke Dijkstra, Tübke has a gift for allowing his subjects to perform in their solitary drama. “Many people”, he writes, “try to hide their emotions and feelings as they go about everyday life. This public persona is often calculated to mask what is within, creating a veneer of individuality, a fabrication to hide behind.” In Citizens, Tübke has created, from real life, a cast of characters who play their parts in the urban drama. All of the people he has photographed pose in the same way, directly facing the camera, in front of a background of concrete or stained brick wall. A man in an oversized blazer and a paisley scarf, a woman in a white tracksuit, a middle-aged redhead in a cerise mac, and urban cowboy, a dark-haired woman with a vintage suitcase, a dishevelled man with a shopping bag. These are people with their secrets, joys, anxieties, dreads and anticipations, but we can only wonder as to what they are. Tübke’s photographs are cool and beautiful enough to be fashion images, a studied reflection of street style, but in the end, this is belied by the democracy of their vision.
Looking through these photographs, it is difficult to detect an underlying agenda. This is not a search for “types” or a Sanderesque study of society. There are no judgements made in these photographs, no division made in the ways in which the old and the young are studied. Perhaps most obviously, there are no extremes -however different they are from each other, Tübke’s subjects are all in control of their urban environment; they stand confidently, hands on hips, confronting the camera, playing their part in these subtly and carefully choreographed scenarios. But, democratic as Tübke’s vision may seem at first sight, closer examination of the photographs reveals that, in his search for “ordinariness” the quotidian of the urban experience, he has selected (from the thousands of people he has surveyed) men and women who have an undeniable sense of presence. There is, without a doubt, something strange and mysterious about all the “Citizens” who Tübke has photographed. It is as if they have cast themselves in some unknown drama of the urban, assembled their outfits that morning as if they knew that they would, that day, be stars. A young man in an artfully baggy suit, dark shirt and narrow patterned tie, rucksack slung carelessly across his shoulder, becomes the epitome of how young city dwellers see themselves, dandies in the concrete, 21st century flaneurs. But Tübke is adept at both suggesting and then refuting such simple suggestions-another young man, rumpled and gawky, tie askew and hands held awkwardly by his side, hairstyle outdated, anxious even at the thought of being photographed, proves that our dearly cherished myths about the city exist to be challenged, and, ultimately, refuted. But Tübke views both young men with equivalence-neither has more value than the other in this eerie grey landscape; they are all “Citizens”. But however democratic Tübke’s vision may be, however skilfully and thoughtfully he has avoided and refuted the cliches of fashion and “real life” photography, he is nevertheless attracted to certain motifs, distinguishing marks of these strange tribes who occupy the cities of the western world. Tübke is attracted to the small gestures of taste and style, which indicate that the individual, far from being lost in the mass, makes continuous signals of personality and character. A woman in a patterned blue suit wears a flower in her hair and chooses her umbrella to match her ensemble, another dresses all in vibrant pink, with a blinding cerise streak across her hair, coats are carefully matched to bags, shoes tone in with ties, the casual is juxtaposed with the formal. Even those who we would not classify as glamorous are sending signals about how they would wish to be perceived- an old man in a big red shirt, a blonde woman in a scarlet jacket and glossy trousers. When people look into Tübke’s camera lens, there is a kind of defiance- “look at me, here I am” which has little to do with a fashionability. And undoubtedly, Tübke is attracted to the dandy, whether male or female, the urban cowboy with his black and white patterned short and Stetson, the dude in his slick suit and patent leather shoes, the city woman cool in grey business suit and high heeled shoes.

As one of a new generation of young photographers, operating across the borders of Europe, Tübke is asking questions about identity, society and the role which photography plays as a documenter of our times: “In this work I am investigating the boundary between self-portrayal and real identity. The choice of subjects is limited to those people where I imagine that I may be able to reach beyond the superficiality of external appearance, the constructed image, to something of what lies beneath.” The choice of subjects is carefully controlled, and there is a deliberate avoidance of naming or description. Perhaps it is symptomatic of this new generation that the photographers who belong to it see photography as an act of subjective recording rather than as a dramatisation of real life. Like the photographers of the 19th century, who saw photography as a magic tool for capturing likenesses, Northern European photographers such as Tübke, Rinkeke Dijkstra (Netherlands), Pekka Turunen (Finland) and Alexander Honory (Germany) have all adopted a cool yet interested gaze, fascinated by the differences within sameness. Tübke has written: I want to show people from a variety of different backgrounds, as I am interested in the range of ways in which people present their public face.

Through constant exposure to the multitude of public personae with which we are presented, we have become anaesthetised to the range of individuals that surround us. In this project, I am attempting to distil out something of the essence of that individual. “ Dalliendorf, Albrecht Tübke’s first published project (2000) is a series of portraits and documentary photography made when Tübke visited his home village after a period of absence. Although the
Methodology of his portraiture was much the same as in “Citizens” these were people he knew intimately, people he had grown up with. Yet in confronting these familiar figures, Tübke laid the foundations for “Citizens”, for there is no more familiarity in the gazes which the inhabitants of Dalliendorf direct towards this “visitor” than there is in the expression of the city dwellers he has sought out in the great metropolis of Europe. Perhaps it is that photographers are always alien beings, inquisitive, scanning the surface looking for the visual signs of identity. Like visitors from another planet.

Citizens, with its careful notation of style, dress, attitude and bearing will, almost undoubtedly, take its place as a seminal recording project of our time. The people in Tübke’s photographs have moved on now, may well have changed their way of being, altered the visual messages they send out the world. Pink hair may have changed back to brown, the scarlet jacket may have been discarded for something more muted, the vintage suitcase may have been rejected as an affectation. The people in Tübke’s photographs, seeing themselves on the pages of a book or the walls of an exhibition may wonder “was that really me?” And thus the conundrum of photography continues, as its irrefutable documentation of the here and now becomes a history of time’s past, an ongoing drama of the photographed and the photographer, a bewitching combination of loss, desire and memory. 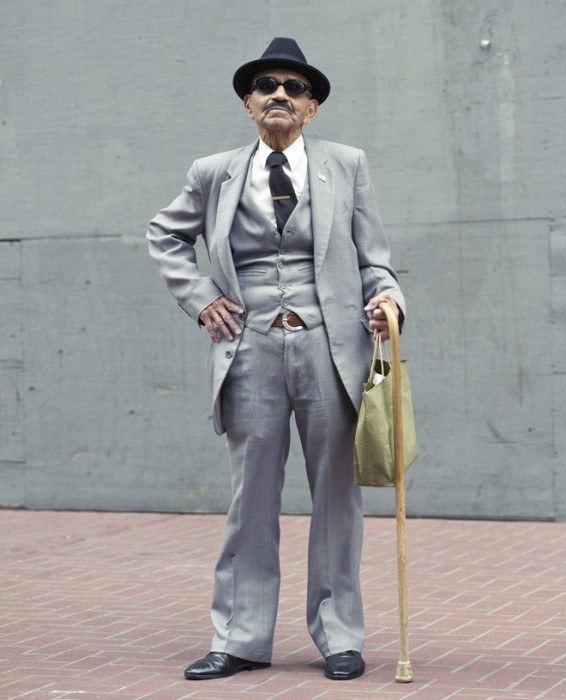 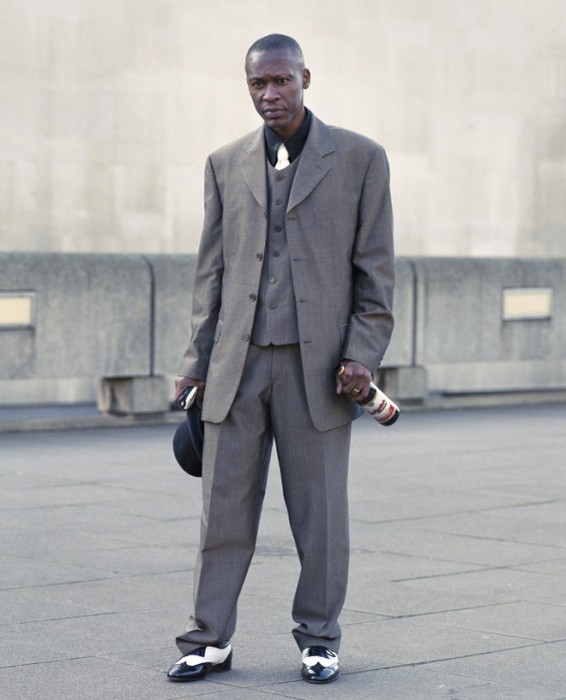 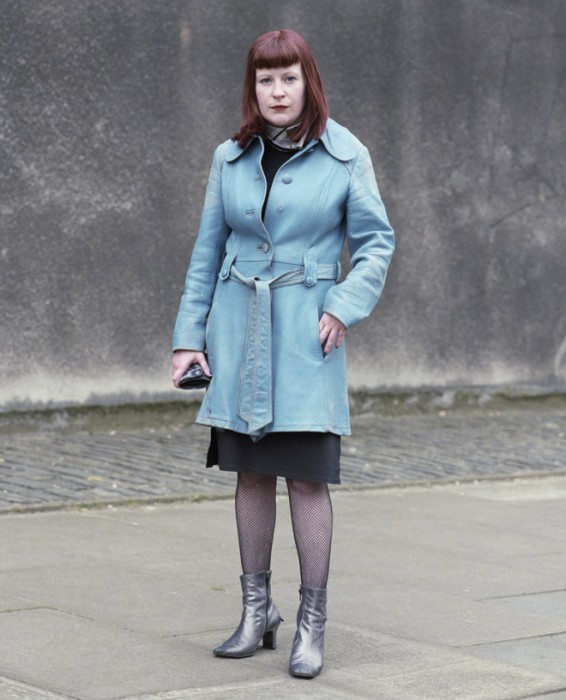 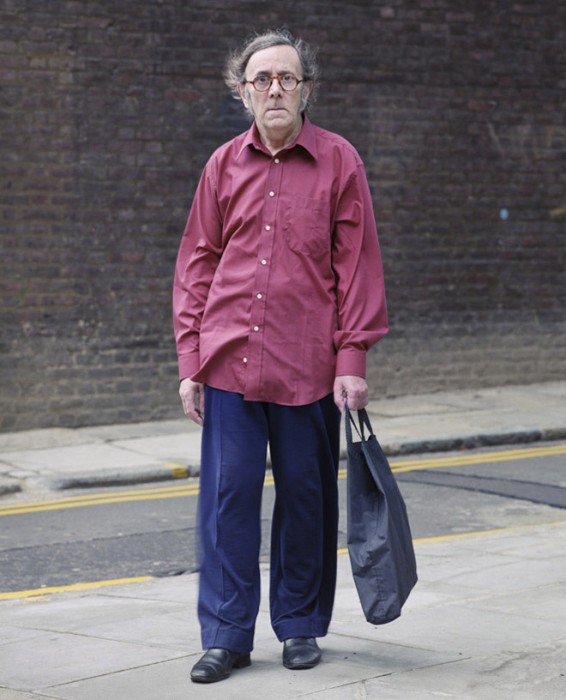 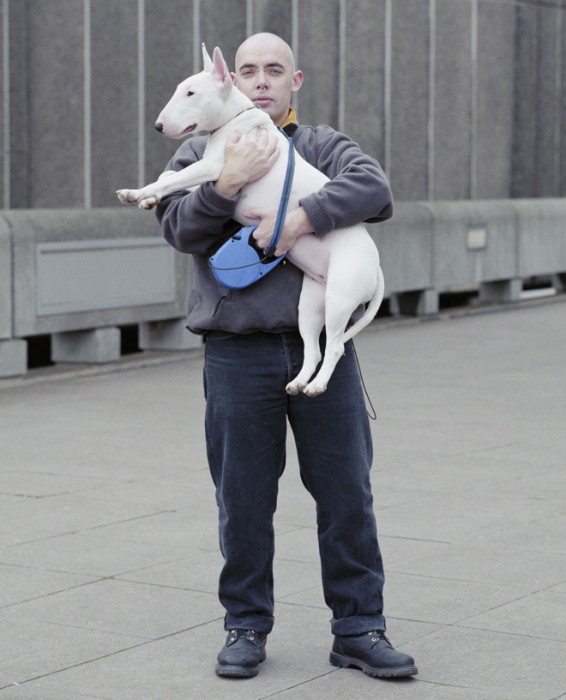 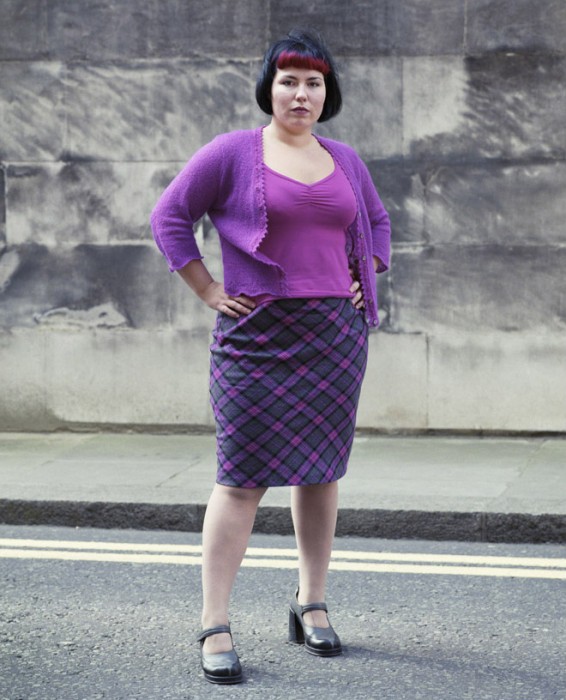 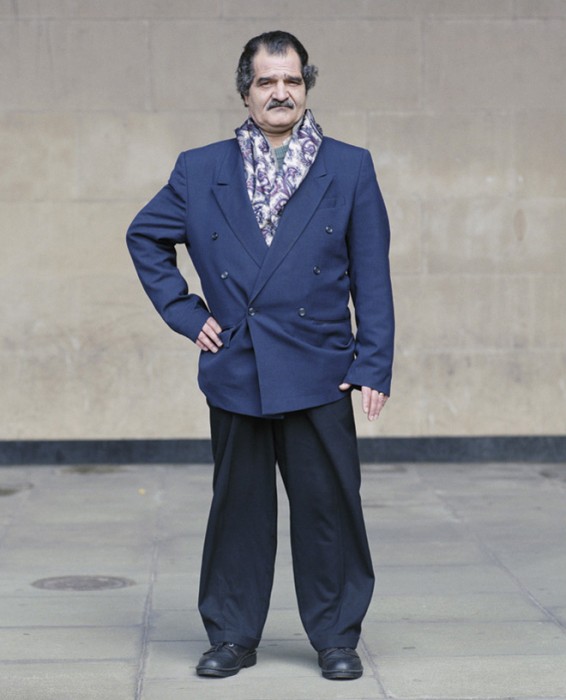 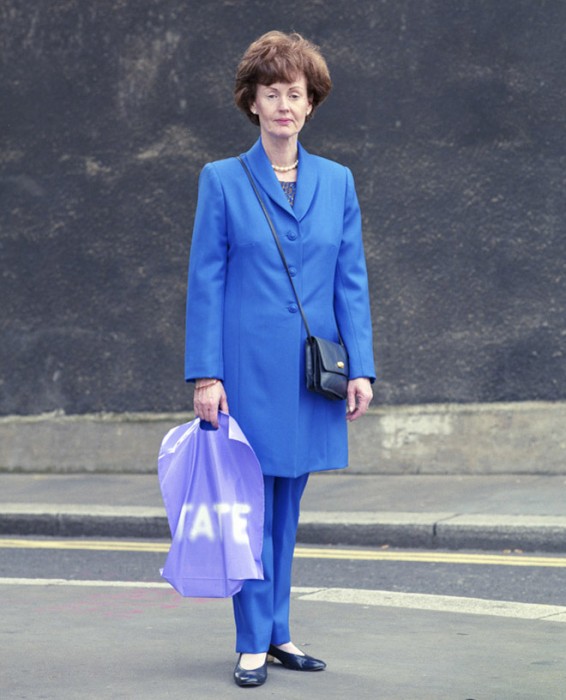