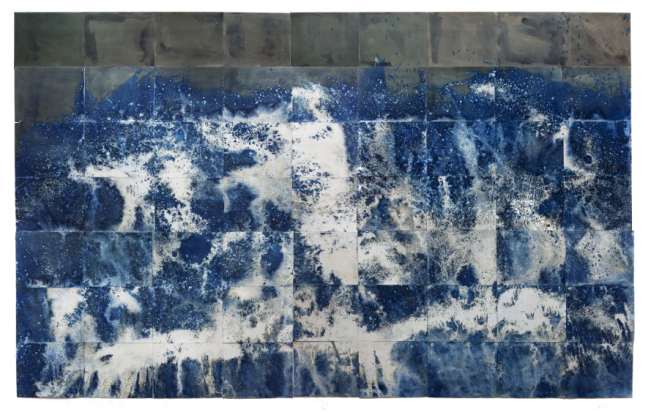 Talented and innovative photographer, Meghann Riepenhoff will have work in the exhibition, Imaging Now: Collected Visions (Curator: Dani Cattan), at the Memphis College of Art in Memphis, TN opening on March 15th, 2015. Her work begins with a focus on process but results in abstracted ways of considering created worlds, reflecting a watery earth or electrified heavens. Today I am featuring two of her projects, Littoral Drift, and Instar. Littoral Drift is a collection of unique photochemically processed cameraless cyanotypes and archival pigment prints that are re-photographed over time as they change and morph into new considerations.

Riepenhoff is currently an Affiliate Artist at Headlands Center for the Arts and has been an artist in residence at Rayko Photo Center and Banff Centre for the Arts. She has lectured at Brown University, San Francisco Photo Alliance, California College of the Arts,  Society for Photographic Education Conference, University of Art and Design (Queretaro, Mexico), and has hosted workshops on the value of photography for at-risk youth. She earned her BFA in Photography from The University of Georgia and her MFA from San Francisco Art Institute, where she is now a member of the visiting faculty. 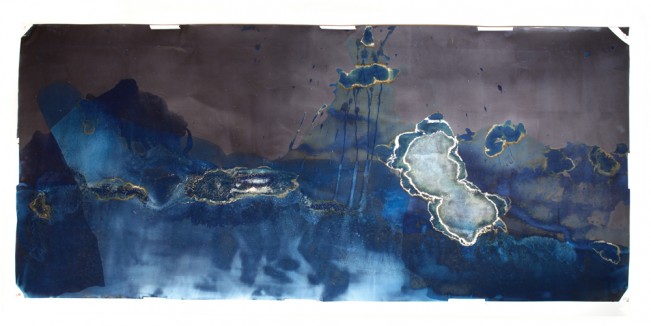 This work stems from my fascination with the nature of our relationships to the landscape, the sublime, time, and impermanence. Entitled Littoral Drift, a geologic term describing the action of wind-driven waves transporting sand and gravel, the series consists of camera-less cyanotypes made in collaboration with the landscape and the ocean, at the edges of both. The elements that I employ in the process—waves, wind, and sediment—leave physical inscriptions through direct contact with photographic materials. Photochemically, the pieces are never wholly processed; they will continue to respond slowly to the changing environments that they encounter over time, and potentially self-destruct. As part of the larger project, I selectively re-photograph moments in the evolution of the images, to generate a series of static records of a transitory process. Entitled Continua, the progressive images are shown as polyptychs. Perhaps where the fugitive cyanotypes are analogies for a terrifyingly fleeting and beautiful existence, the process of re-photographing them is a metaphor for the incorporation and mediation of photography in the contemporary human experience.

Cyanotypes range in scale from 14”x11” to 42”x120” and re-photographed Continuum pieces range from 19”x11” to 16”x50”. Two-sided cyanotypes are suspended from the ceiling with custom clamps (see example below) so that both sides are visible, and the work remains exposed to environments. 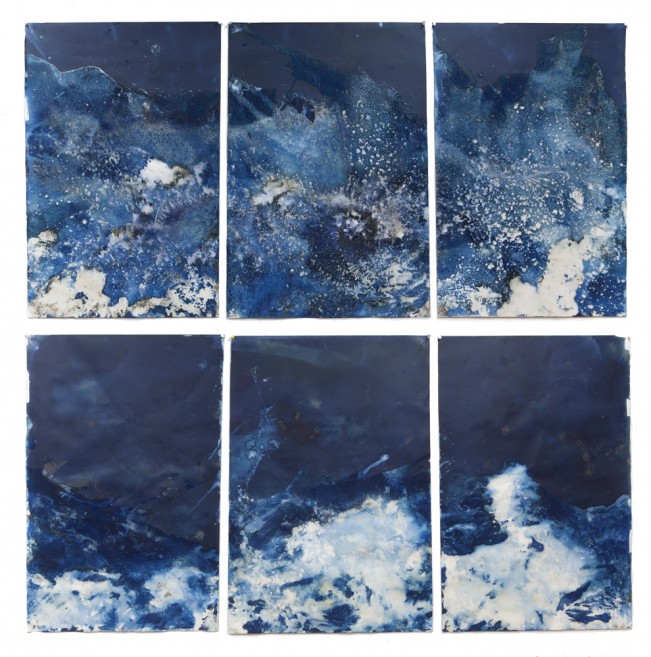 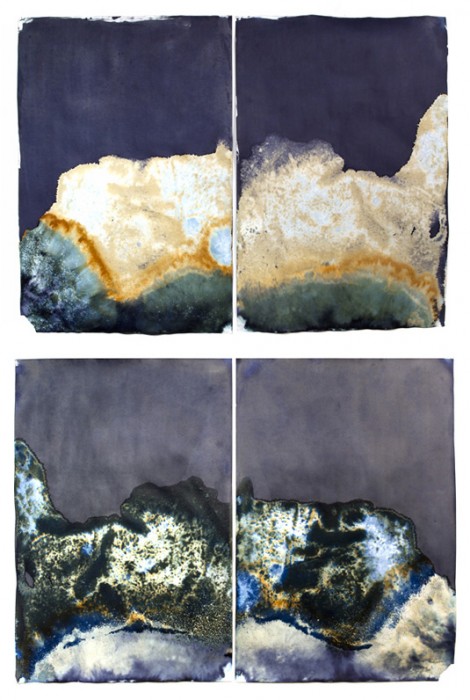 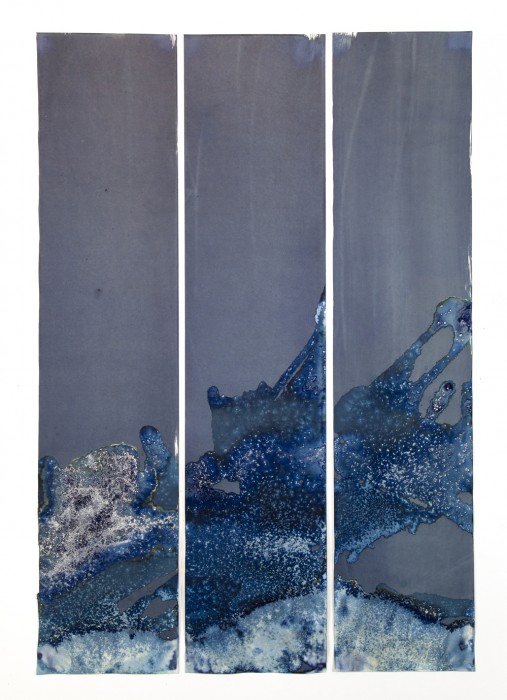 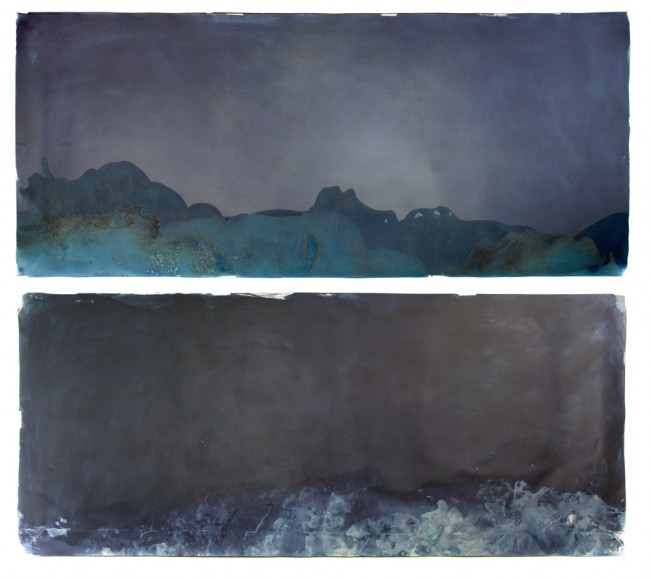 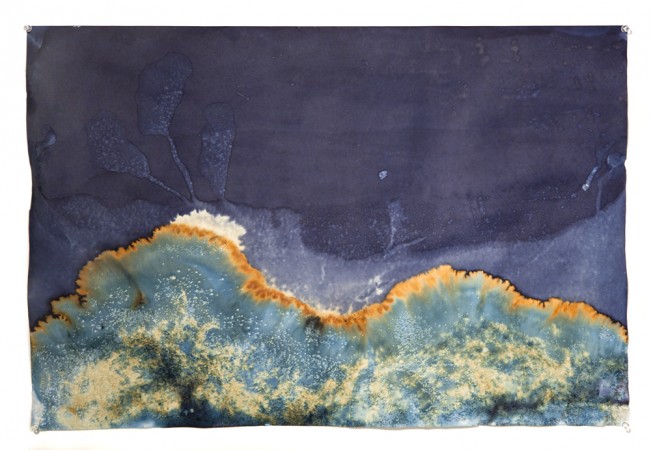 As imaging technology continues to evolve, we are regularly provided with visual references to what was previously unknown and unseen. Most emblematic of imaging the great mystery in which we exist are pictures of cosmic events, planets, and the massive darkness that surrounds us. In the series Instar*, I transform the utterly mundane detritus in order to recreate and recall telescopic views, and in doing so consider the relationship between the insignificant and the immense.

All images are chromogenic photograms, compositions made by placing objects onto light-sensitive paper in a darkroom, exposing the paper to light, and processing it in traditional photographic chemistry. The nature of the process requires me to compose the image in total darkness, and, therefore results in unique pieces. 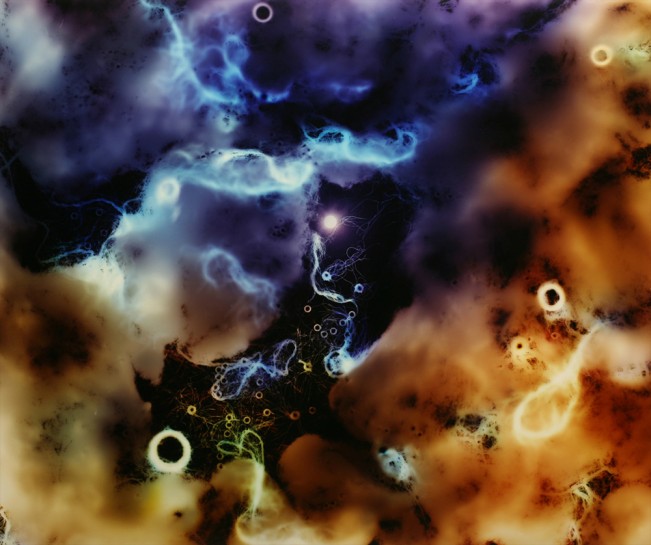 * The series title Instar is derived from the following Rebecca Solnit quote. Instar is a biological term used to describe the successive stages between molting in an insect. “The strange resonant word instar…implies something both celestial and ingrown, something heavenly and disastrous, and perhaps change is commonly like that, a buried star, oscillating between near and far”. 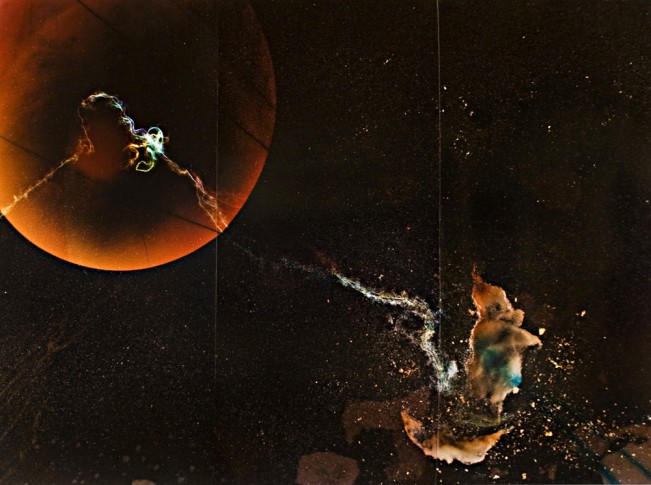 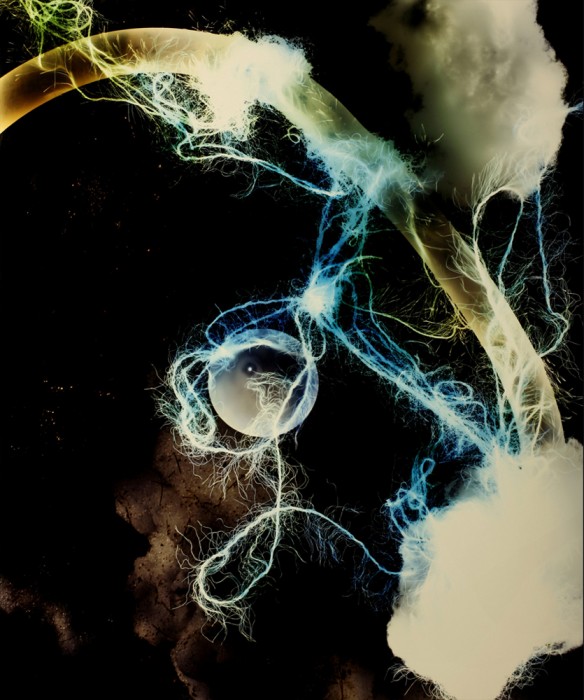 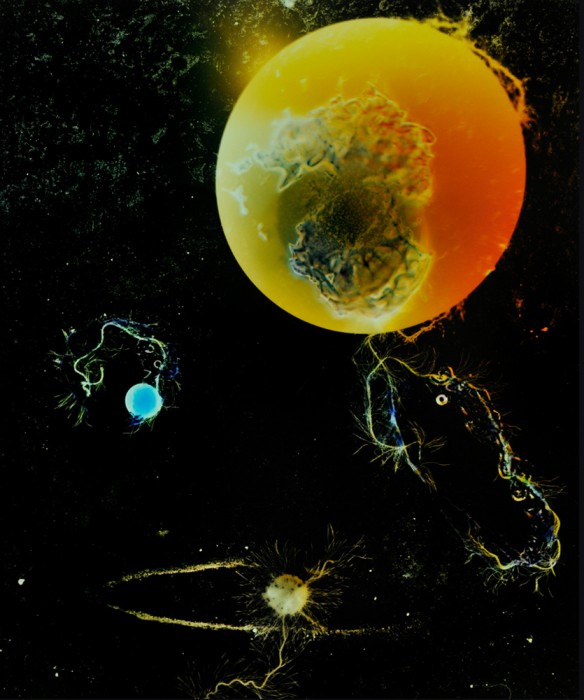 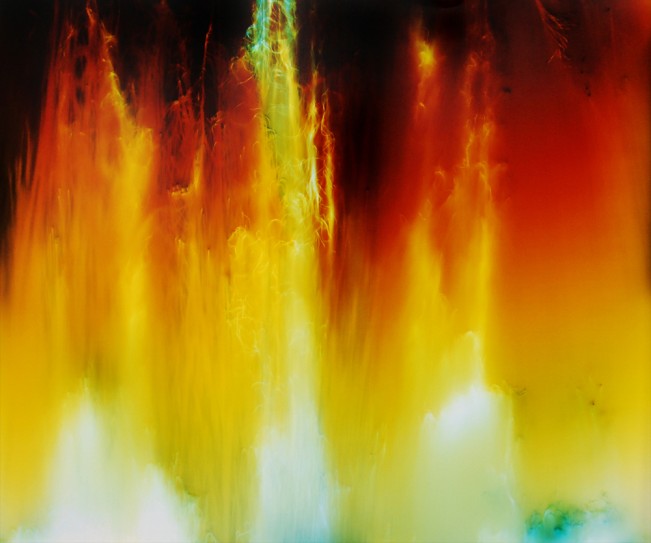 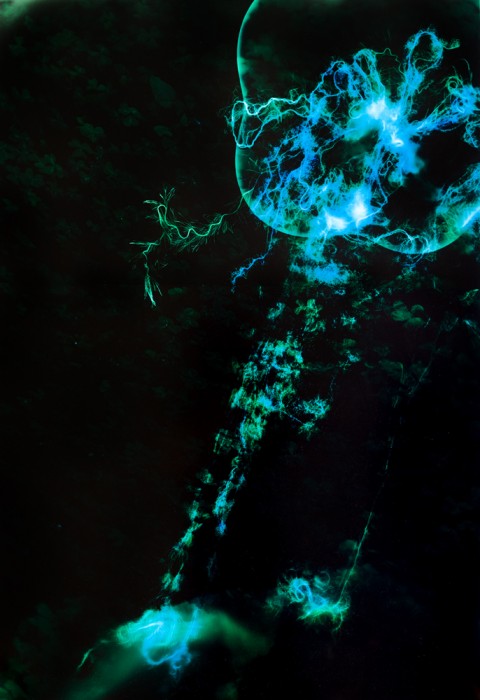 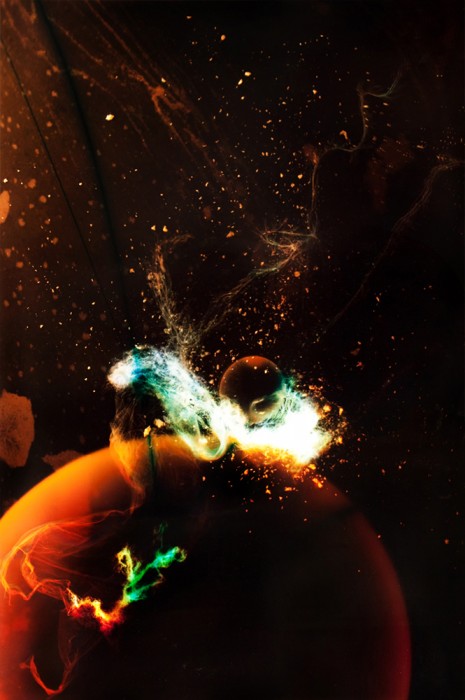 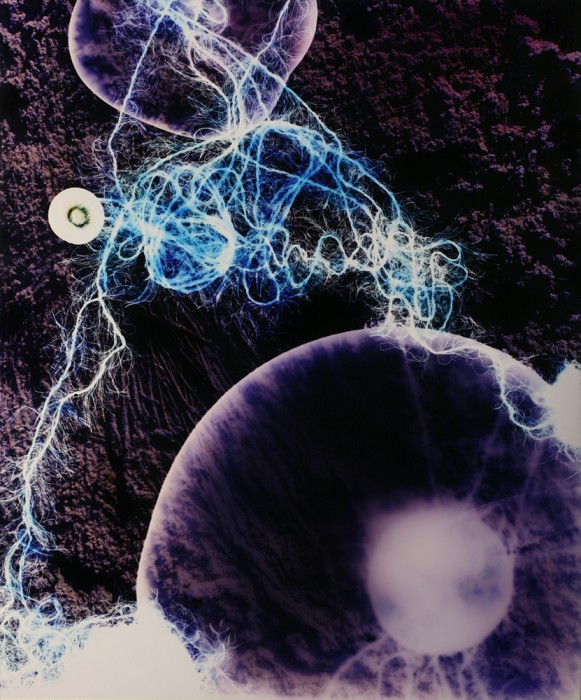 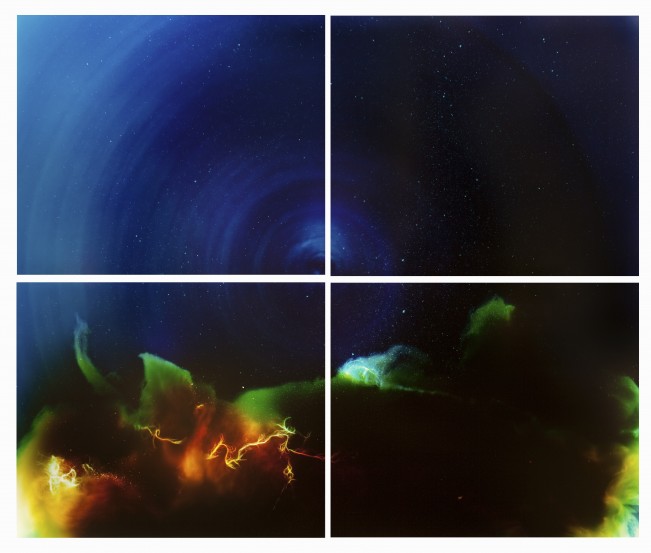 NEXT | Albrecht Tübke: Heads and Citizens >
< Bego Antón: The Earth is Only a Little Dust Under Our Feet | PREV