Rebecca Sittler: All the Presidents’ Men and Seafaring Women by Aline SmithsonSeptember 23, 2015 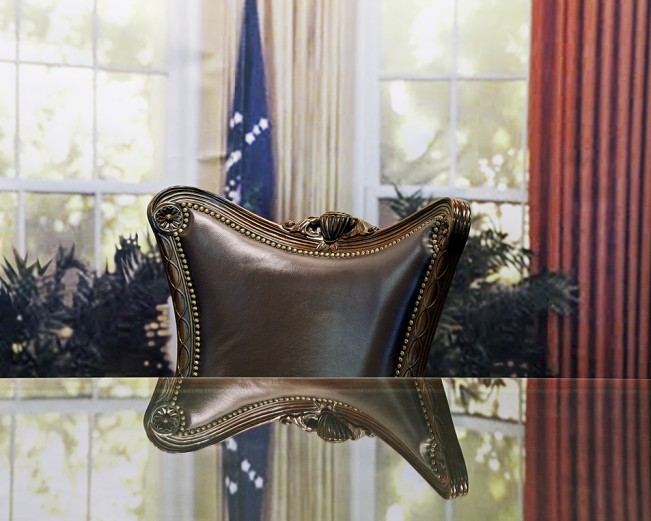 Photographer Rebecca Sittler has much to celebrate. Her project, All the Presidents’ Men, received the Innovation in the Documentary Arts Award from the Archive of Documentary Arts this summer; she is a Critical Mass finalist and will have work an upcoming Houston Center for Photography fundraiser. She has also created a book of  All the President’s Men available on her site, and on Aint Bad Editions. This project examines how we shape memory and historic narratives in the context of the museum setting, selectively presenting artifacts to create a particular perception.

In addition to creating a significant project, Rebecca and her collaborative partner, Anastasiia Palamarchuk,  created The Institute for Inverted Histories (also known as iIh) to bring lesser-known historical narratives surrounding gender, political, and cultural identities to a larger public via publications, public discussions, and designed museum and gallery displays. iIh seeks out contradictory narratives, uncollected bits of larger stories, or reinterpretations of dominant narratives or structures. These projects are united by a strong desire for objects and experiences that acknowledge the mysteries and contradictions that persist among the material traces of history (or history in the making). Their collaborative newspaper project, Seafaring Women, is featured at the end of this post.

Rebecca Sittler is photographer and Associate Professor of Art at California State University, Long Beach. She received her MFA from Massachusetts College of Art in 2003 where she studied with Abelardo Morell. Sittler has exhibited her work at venues such as Sam Lee Gallery, the Photographic Center Northwest, Torrance Museum of Art, the Griffin Museum, Atlantic Center for the Arts, RayKo Gallery, Photographic Resource Center, as well as the University of Florida, Texas Woman’s University, Boston University, and Washington State University. Internationally Sittler’s photographs have been shown in Russia, South Korea, China, and England. In 2015, her series, All the Presidents’ Men recently received the Award for Innovation in the Documentary Arts from the Archive of Documentary Arts at Duke University. 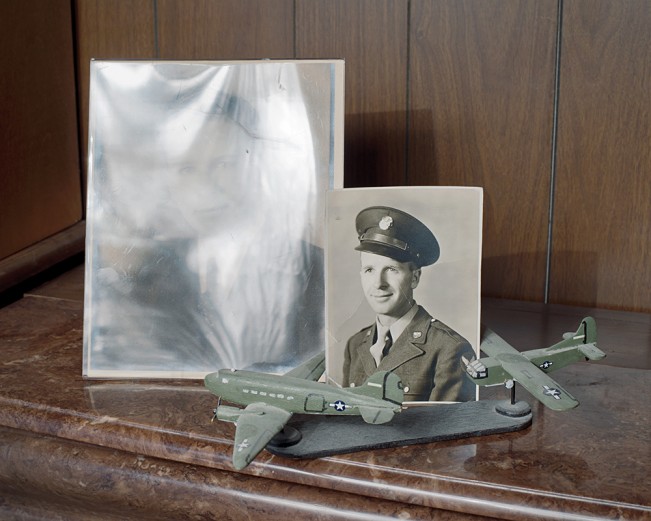 ©Rebecca Sittler, Before & After, Archival Pigment Print, 2013. Photographs of my grandfather, Alvin Luebbe, a glider pilot in WW2, before and after the war, displayed on my grandmother’s artificial fireplace (Beaver Crossing, NE)

All the Presidents’ Men combines photographs made in presidential museums and historic sites across the United States with images from my father and grandfather’s homes. In 1959, after a spontaneous all-night road trip, my 18-year-old father met former President Harry Truman out for a morning walk on the streets of Independence, Missouri. He doesn’t remember what they talked about, only the thrill of meeting a “powerful”, yet “unassuming” man. Nearly 50 years later, I visited Truman’s presidential museum and noticed there was little evidence of the restlessness and uncertainty that have shaped my father’s generation and characterized Truman’s legacy. 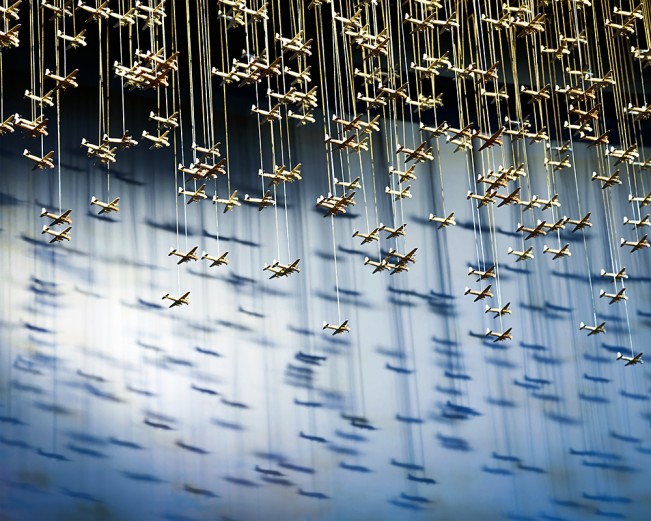 I am intrigued by photography’s increasing role within history museums, where historical narratives intersect with the complexities of photographs, replicas, and ephemera, and are interpreted through the viewer’s imagination and personal experiences. In particular, I see presidential museums as archives of a particular version of American masculinity, informed by American dreams, fictional narratives and political rhetoric. Presidential power is reified and celebrated within the history museum while aspects of presidential identities that are more revealing of their complexity, individual struggles or humanity are rarely or only subtly articulated. These “preferred” heroic narratives have their own blind spots that are also absorbed into our political and personal lives despite the tenuous grasp they hold on the complexities of history and the multifaceted lives of men. 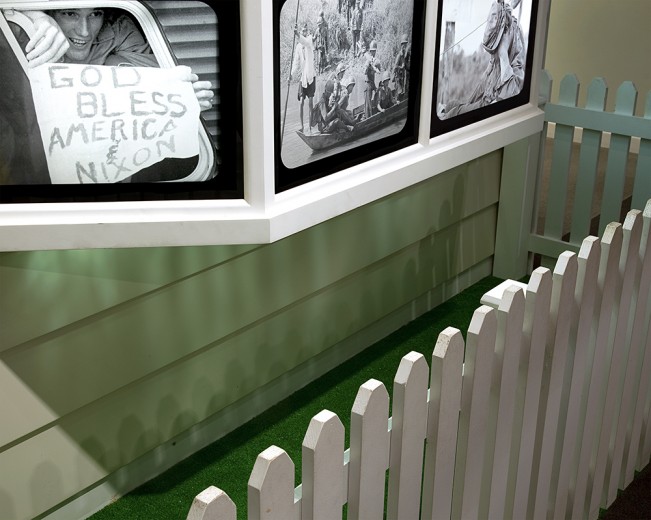 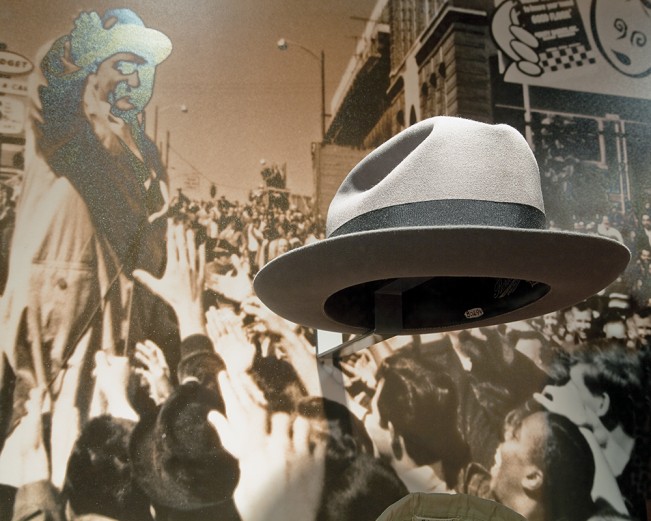 ©Rebecca Sittler, Open Road Stetson, Archival Pigment Print, 2012. A display of the “Open Road Stetson” hat, worn by many celebrities and cowboys and renamed the LBJ Hat after he popularized it during his presidential campaign, Lyndon Baines Johnson Presidential Museum (Austin, TX) 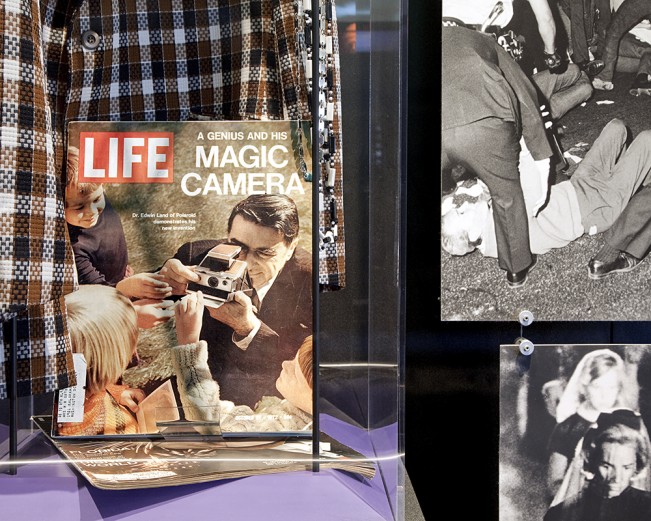 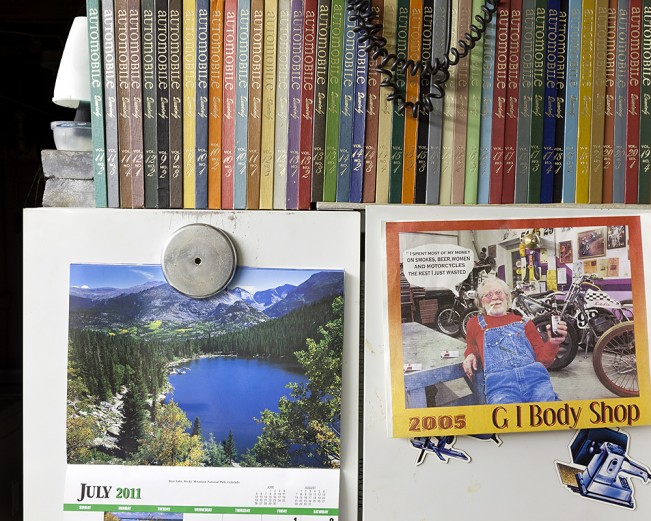 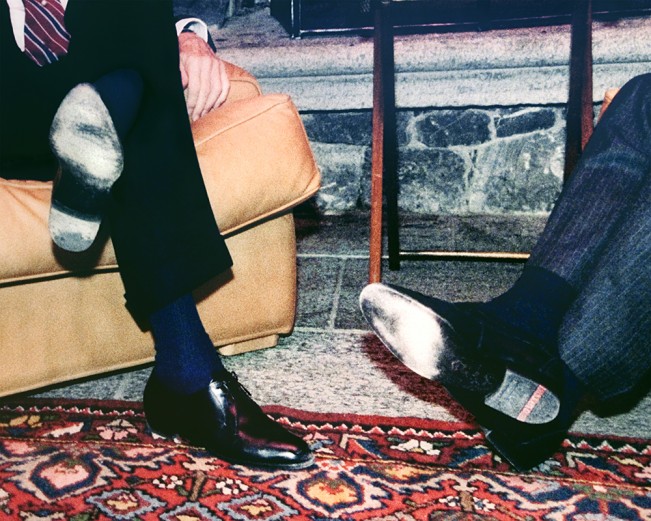 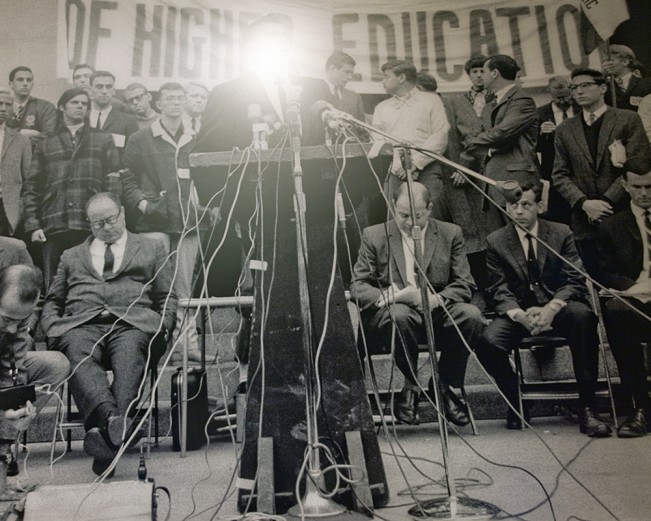 ©Rebecca Sittler, The Speaker, Archival Pigment Print, 2012. Museum spotlight on an enlarged version of a photograph of then Governor Reagan addressing a student protest in Sacramento, CA by asserting that taxpayers should not be “subsidizing intellectual curiosity”. Ronald Reagan Presidential Museum (Simi Valley, CA) 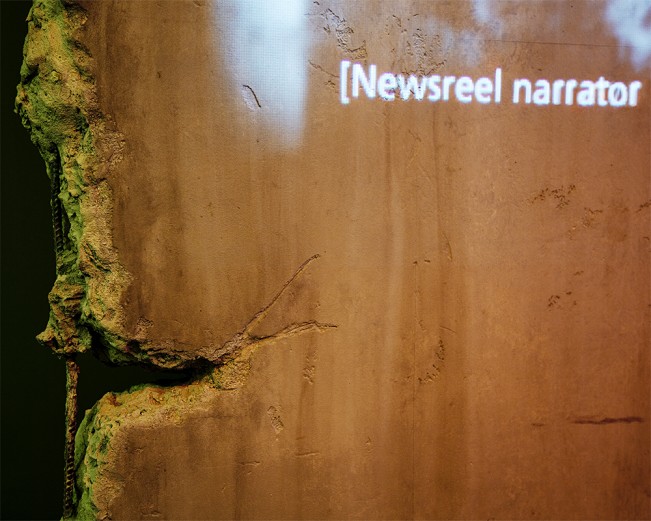 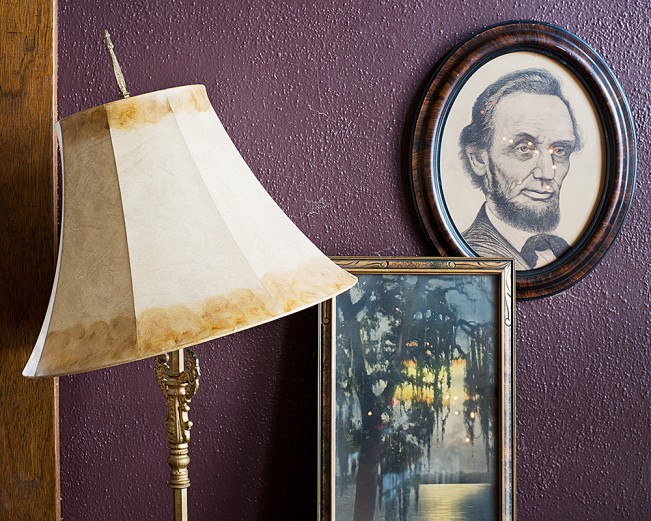 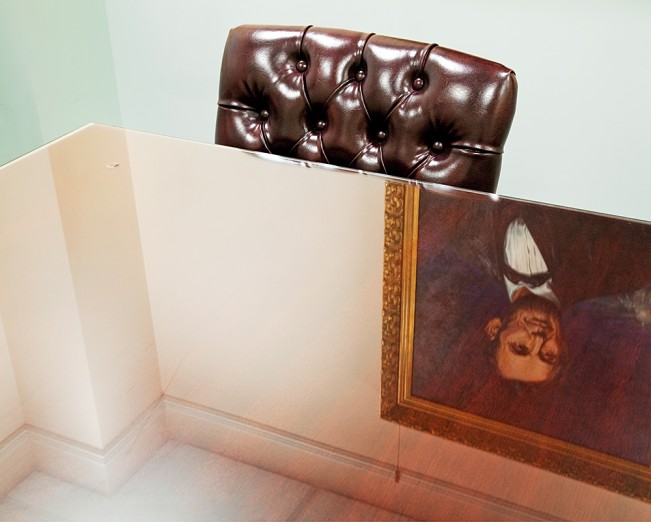 ©Rebecca Sittler, Decision Room Replica, Archival Pigment Print, 2012. Reflection of a copy of a painting of Abe Lincoln on a table in a basement replica of the West Wing. Known as the “White House Decision Center”, this replica is used for school visit reenactments of major moments during the Truman presidency, Harry Truman Presidential Museum (Independence, MO) 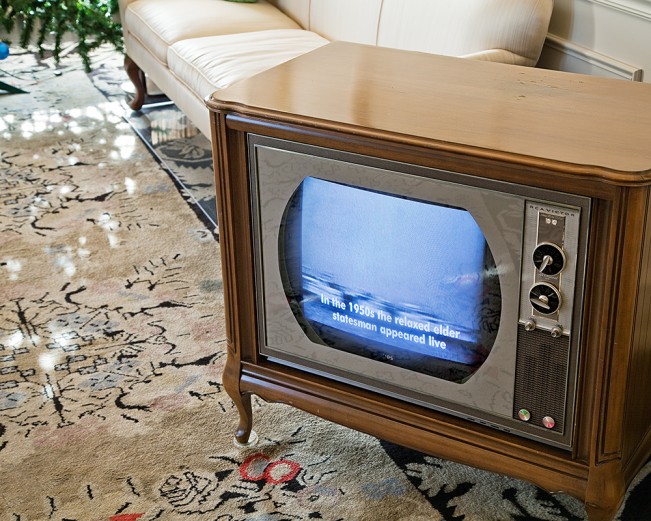 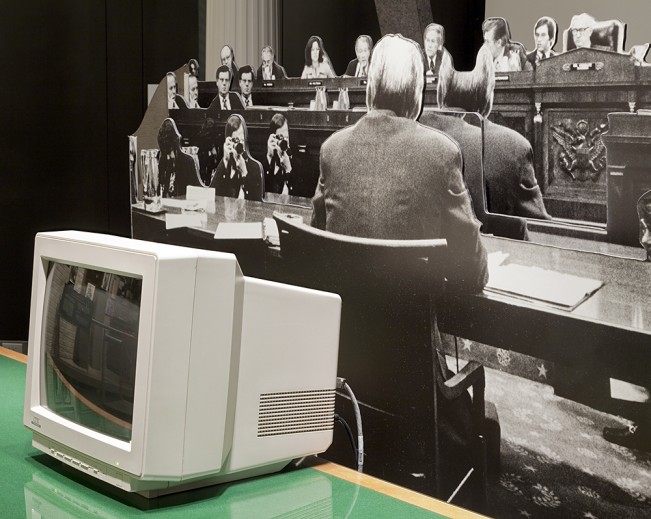 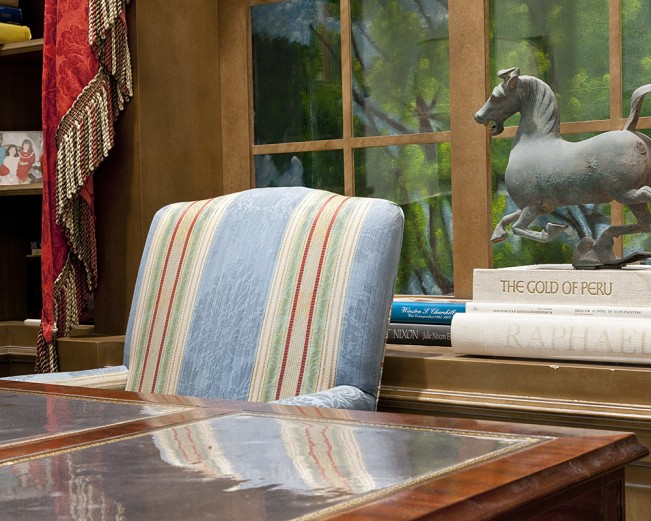 ©Rebecca Sittler, The Gold of Peru, Archival Pigment Print, 2011. Detail of replica of Nixon’s last home office left exactly as it was the night he died, narrated by a video of Nixon reflecting on his presidency and the Watergate scandal, Nixon Presidential Museum (Yorba Linda, CA).

Seafaring Women is a limited-edition print object referencing a double broadsheet newspaper that includes stories transcribed from late 19th and early 20th century news archives describing the surprisingly large numbers of women found aboard battleships, submarines and passenger ships as sailor and stowaways. These were especially popular in British and American newspapers of the 1920s, alongside images and advertisements featuring gender-norm challenging “flappers”. Design elements include remixed lithographs of pirates, courtesans, and sailors, remixed signal flags, and a collage of images of ships at sea known to contain these female sailors and stowaways.

Seafaring Women and the Institute for Inverted Histories are the results of an ongoing collaboration between Anastasiia Palamarchuk and Rebecca Sittler. 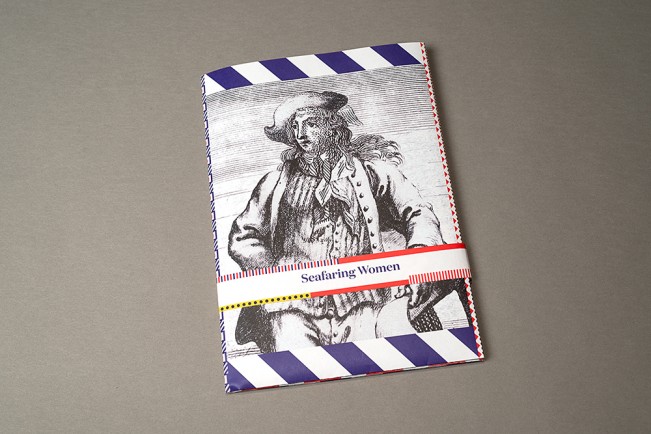 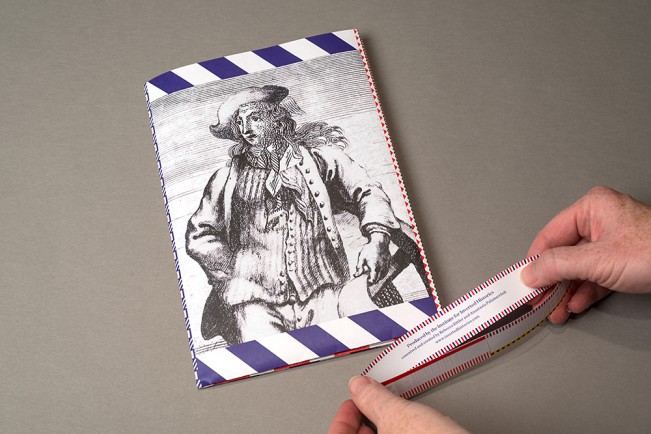 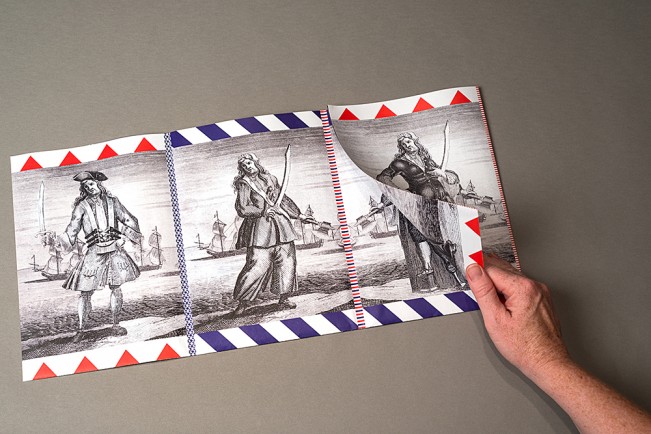 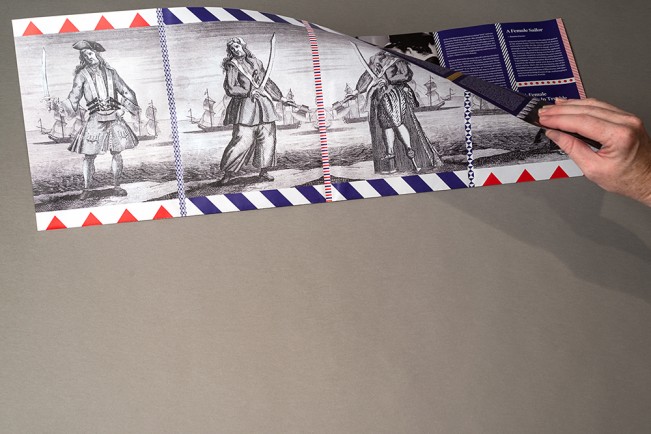 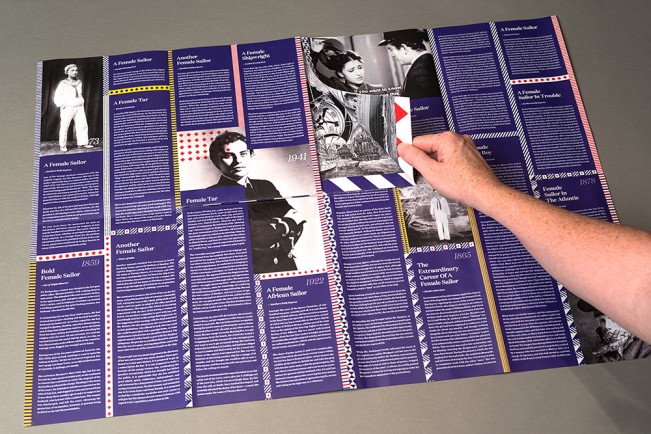 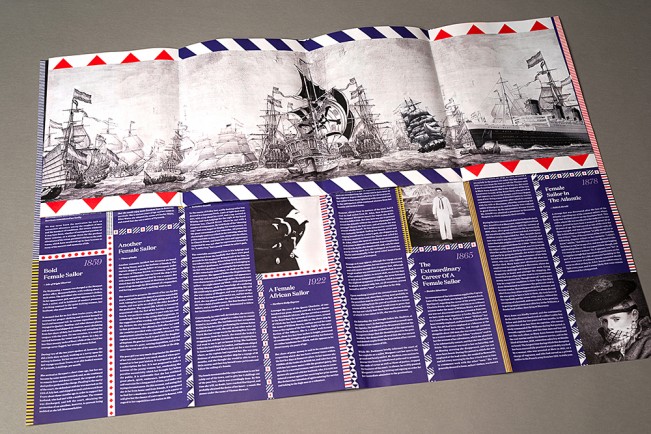 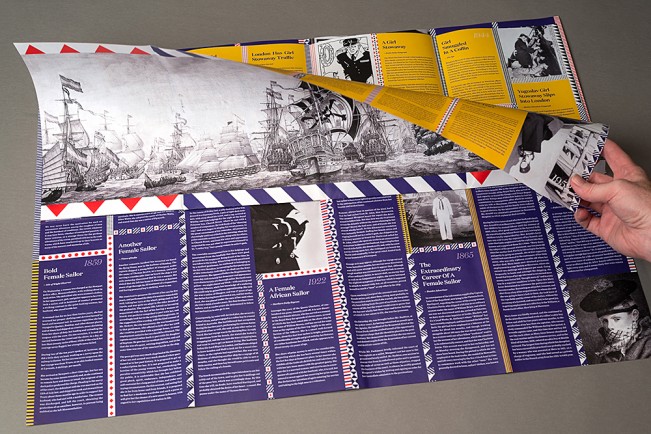 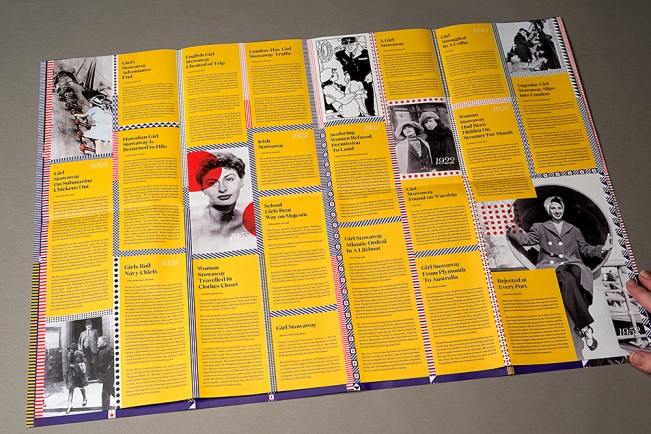