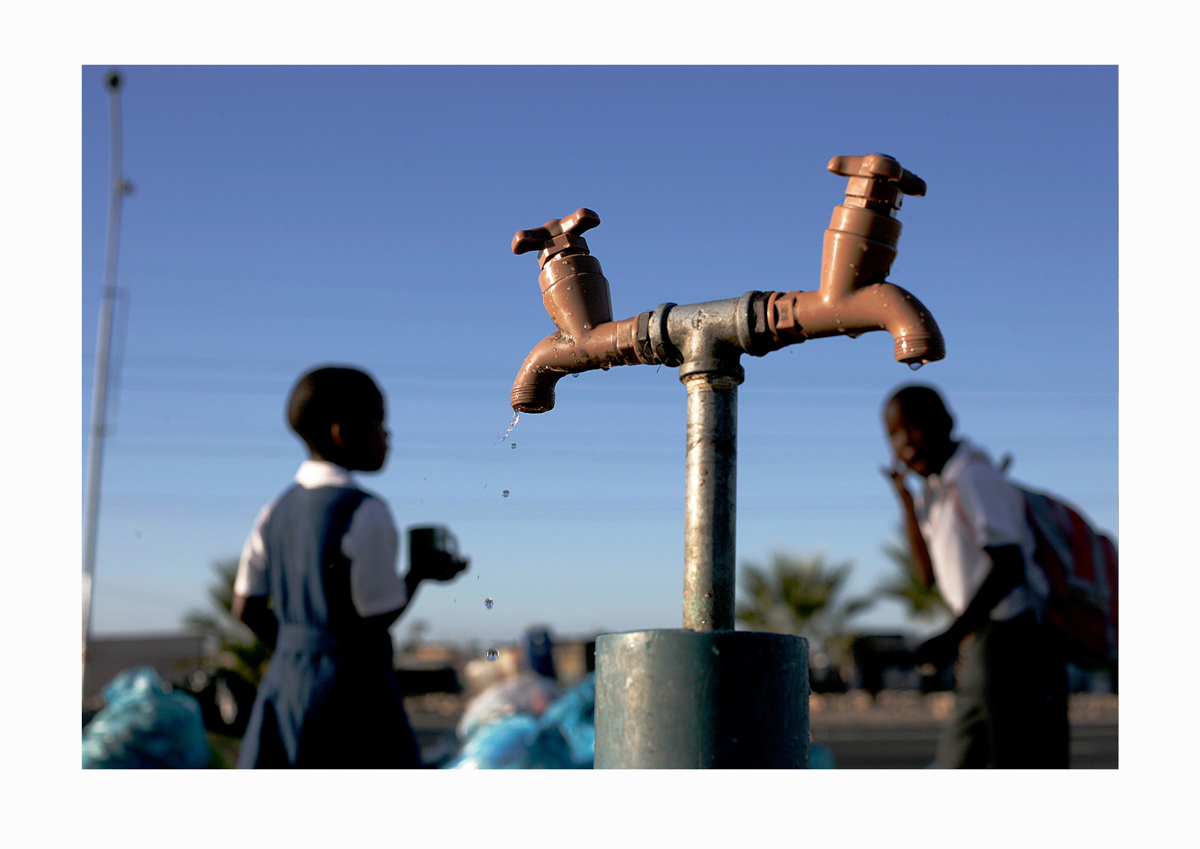 ©Masixole Feni, Public Personal Amenities: Communal taps. Here, a child used the tap to brush her teeth in Khayelitsha, from the series “Water is Life,” 2013-17

Masixole Feni’s series, Water is Life looks at a pivotal issue for a large portion of the Cape Town’s nearly four million residents: access to clean water, sanitation services, and safe housing. The area known as the Cape Flats is made up of a collection of informal settlements, or township areas, that lack the infrastructure of the city’s wealthier neighborhoods. These areas and the conditions with which residents abide speak to the continued challenges faced in South Africa, the world’s most inequitable country: high unemployment, few economic opportunities, and limited access to services.

The photographs in Water is Life offer a ground-level view of problems residents experience, but Feni’s project extends beyond a documentation of issues. Images of residents kneeling to drink water at a communal area, of mother’s carrying water along canals, and dynamic frames of water spraying from taps and hoses add context to negative presentations of the locations. Indeed, Feni’s project describes conditions in the townships without resorting to sensationalist presentations of the communities. Photographs such as, Mshengu Communal Toilets, Khayelitscha, Site C, for example, show a line of blue communal toilets perched precariously above the canal. Feni’s positions his camera below the horizon line, and gives disproportionate weight to the tilted blue outhouses. In doing so, Feni makes reference to looming sanitation issues and tenuous public support services available to these communities without needing to bring his viewers closer.. 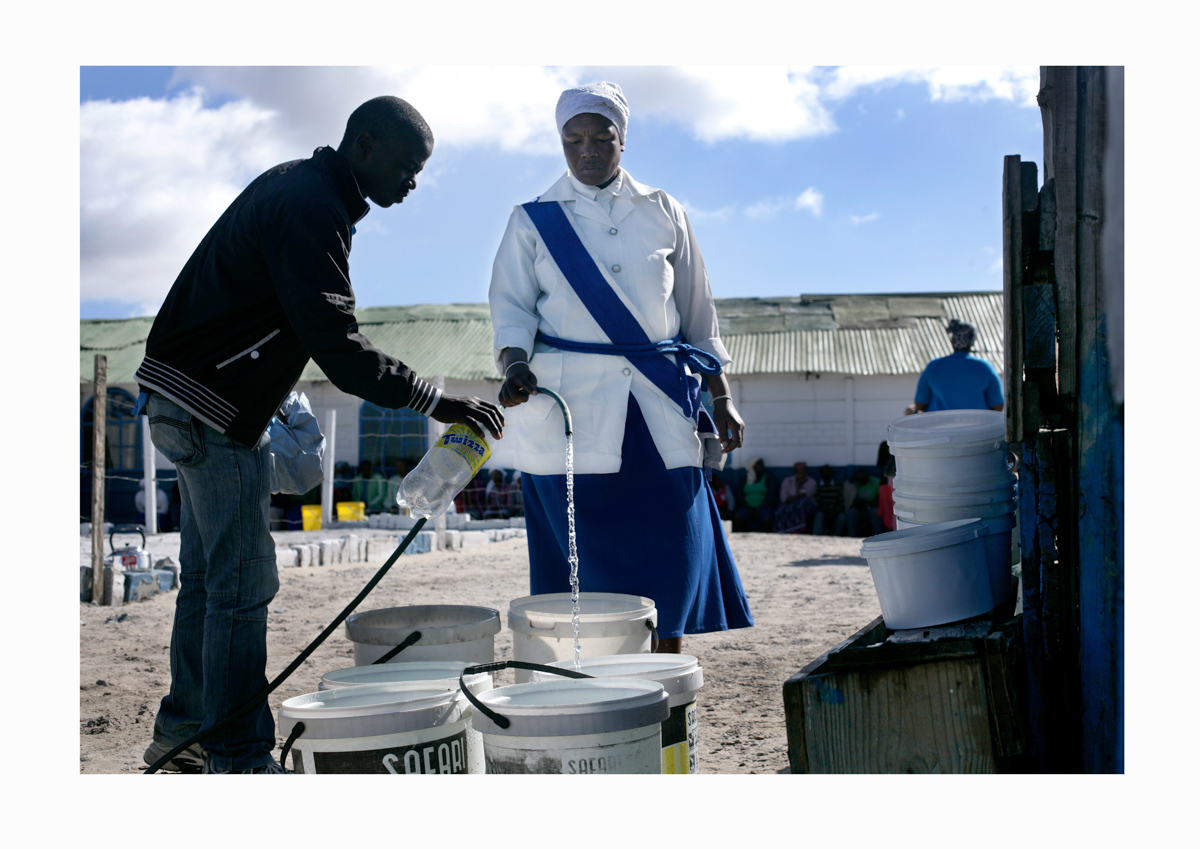 Feni began working on the Water is Life project while freelancing for local newspapers – the Cape Argus and Cape Times. Together with other journalists, he was sent to photograph protests in the townships outside of Cape Town related to service delivery interruptions, forced removals, and sanitation issues. While working on press assignments, Feni grew to feel that there was something being missed in his and others’ coverage of the protest events. As photojournalists, he says, we “covered the protest, but what was the protest about? I didn’t want to just cover people burning tires and stuff like. I wanted to go beyond what we see in the newspapers and in the front pages.” Further, apart from his personal desire, Feni felt that there was a need for more in-depth profile of a place most people only ever saw from the outside. “People only get to see the issues of the townships when they drive through or past the locations. But they never really understand. There’s so much complexity to these places and the people that live there.”

So, in 2013, Feni began traveling to different communities within the townships to speak with residents and view service conditions in those areas first-hand.“I would find similar issues and by talking to people, some people would lead me to other areas I wouldn’t maybe have known of.” Through this groundwork Feni learned about new areas and the complexities limiting access to services in each place. “Not all communities are the same,” he says, “for instance in Mfuleni [his neighborhood] we do have a shortage of toilets but its not as bad as places like Khayelitsha, which are bigger areas and conditions are much more dire.” Feni also began to work with local organizations such as Social Justice Coalition, which were assessing service delivery problems in the townships. 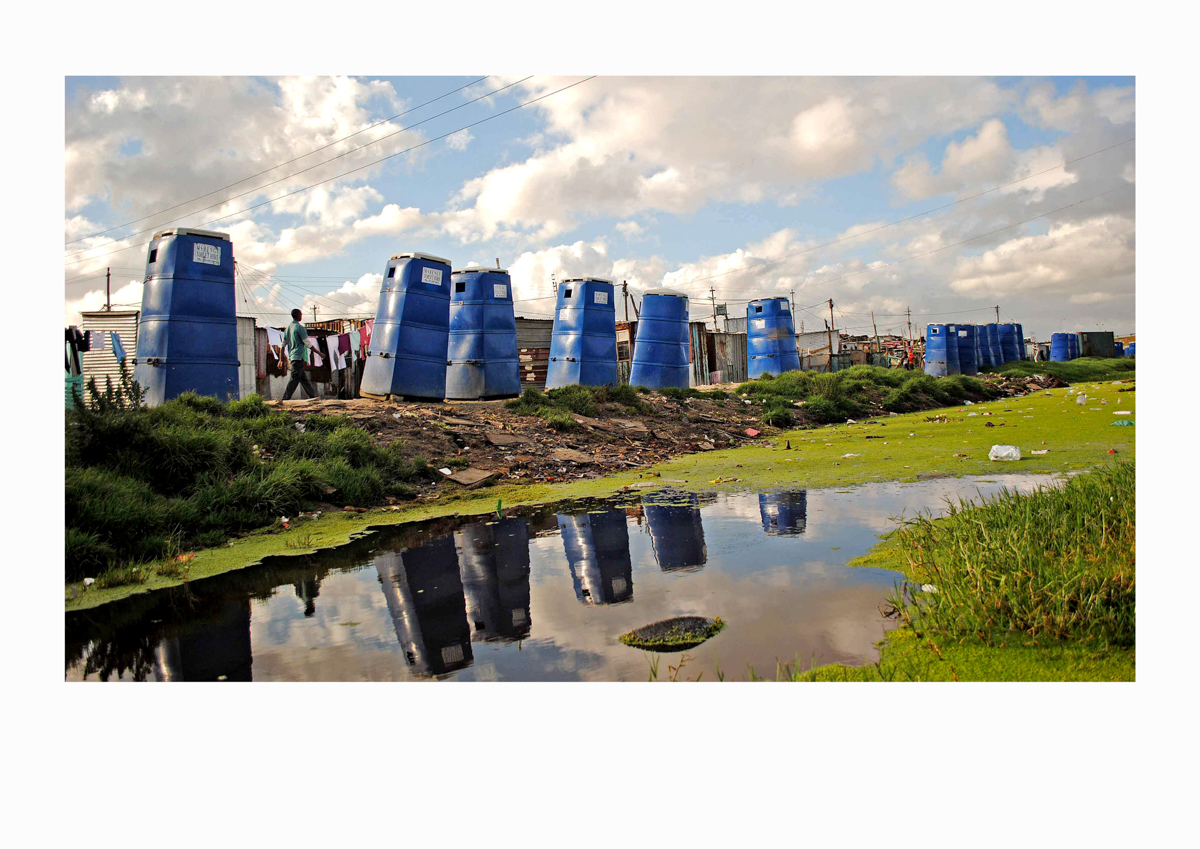 Beginning in 2015 Feni’s in-depth investigation of service delivery challenges was supported in part through the Ernest Cole Award, which was established to help a photographer complete an existing project that responds to South African society. Feni was the fourth recipient of the award, which honors the late Ernest Cole, a South African photographer who used his photographs to show what life was like for black South Africans under apartheid. Cole captured powerful views from inside prisons, mines and hospitals, which often meant sneaking cameras in paper bags. Cole’s collection of images, House of Bondage, provided a first-hand account of conditions and ill-treatment rarely seen by domestic and international audiences.

In creating the award, founders Paul Weinberg and the late David Goldblatt hoped to support documentary projects in the spirit of Ernest Cole’s activist photography, a spirit which finds resonance in Feni’s documentary project. The “Water is Life” series grew from his own experience and desire to communicate the complexity of a place and set of issues few white South Africans experience. “I am a person coming from the locations, from the same surrounding areas. I know the experiences, I live with the people, I know their frustrations. I’ve seen how issues unfold when things are not done properly.” Feni hadn’t considered himself an activist photographer or even a social documentarian, but as an artist who turned his camera to his surroundings and a pressing issue. “I didn’t realize it is what people are calling it as ‘activist photography,’ but then I ended up seeing it in that way because the work talks of a pressing issue in the society.” 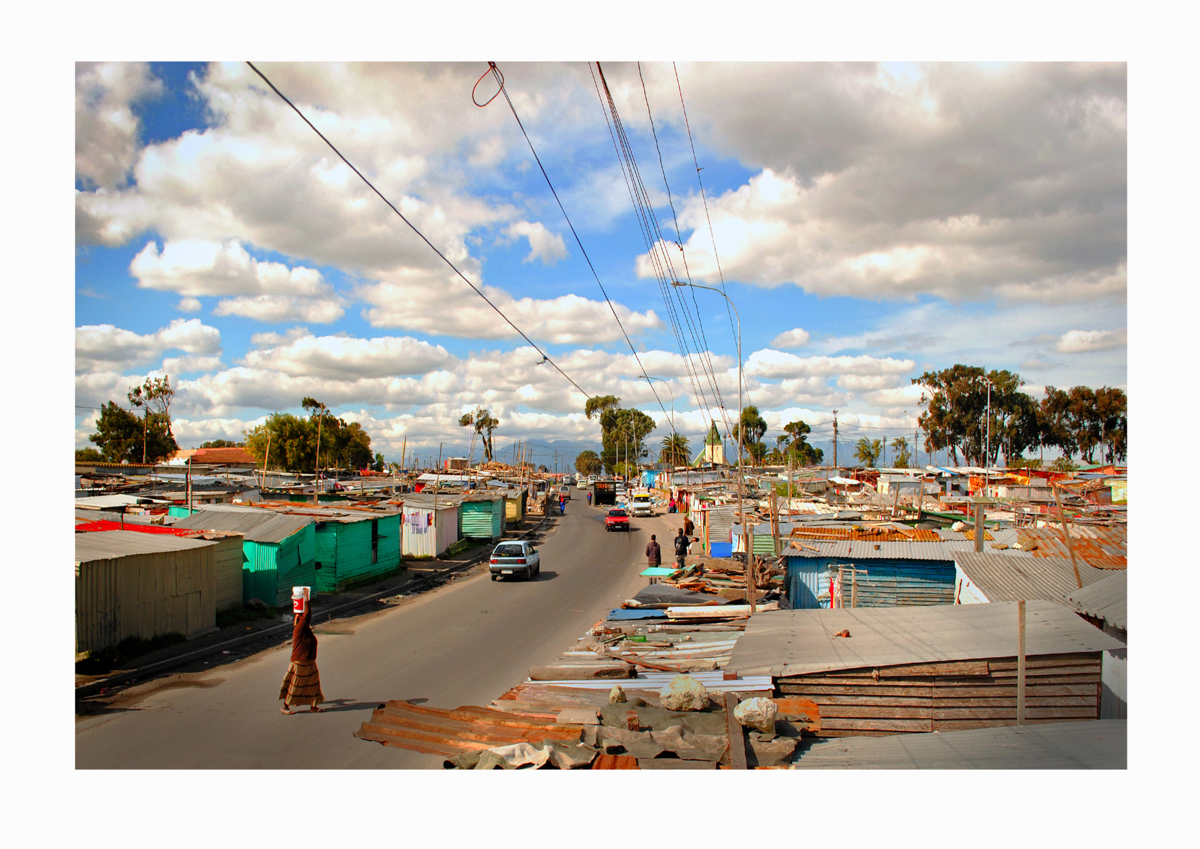 ©Masixole Feni, Water so near but yet so far, A women crossing a main road to collect water in Phillipi

While Feni’s photographs explore the complexity of providing sanitation services in the townships, the series foregrounds broader issues aimed local and international audiences. For Feni, his photographs speak to the struggles of the post-apartheid era and new fronts in the fight against inequality. “During apartheid there was a war on segregation and inequality and on police brutality, but now we have moved into a different era where the war is kind of slightly different — the masses are still being unfairly treated and being forced to live as second-class citizens.” Lack of access to housing, economic opportunity, and basic services represent barriers to achieving the goals of the South African constitution and dreams of the anti-apartheid fighters. Further, for international audiences, Feni’s photographs give depth and insight into issues and places with which they rarely have contact in their visits to Cape Town. “I want international viewers to know the other side of Cape Town besides the oceans, beautiful sites, and Table Mountain. I want them to know what is behind the other side of the mountain.” 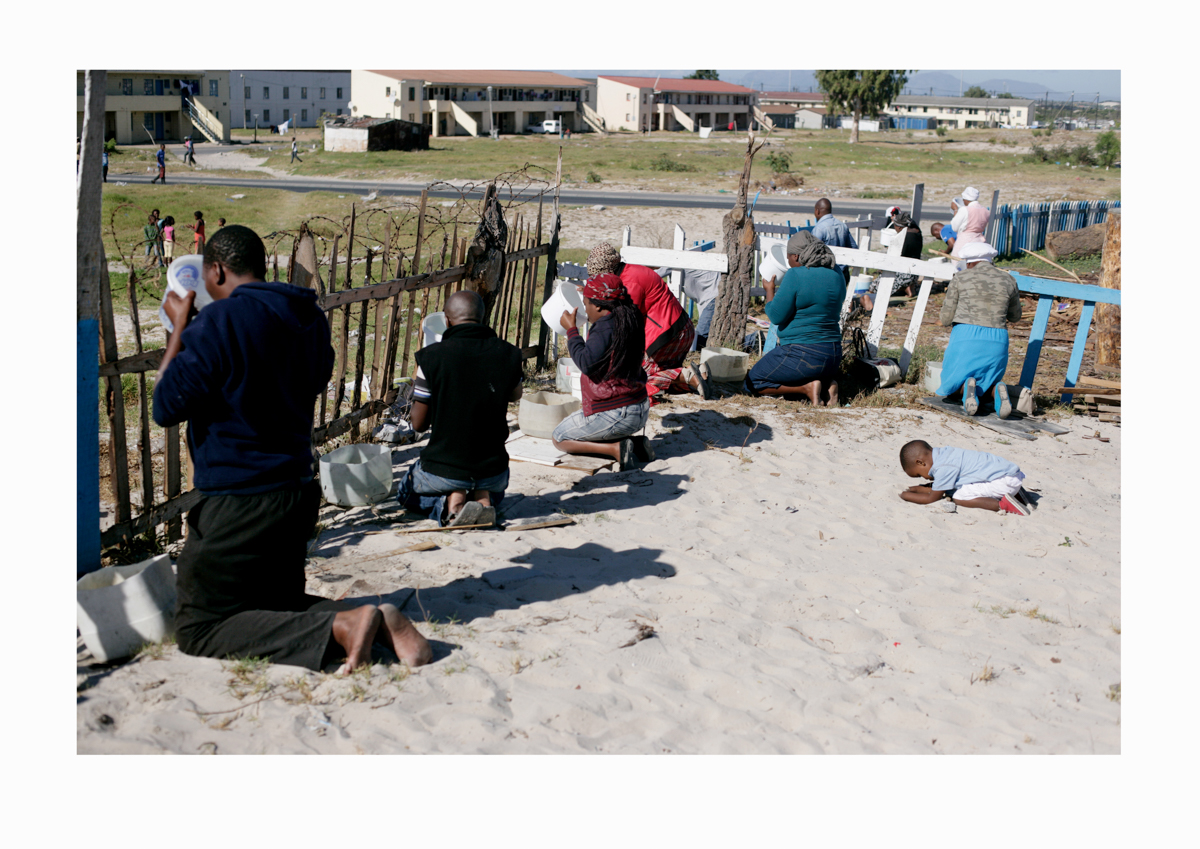 Masixole Feni was born in Cape Town. He grew up in an orphanage home, Sakhumzi, where he was introduced to photography. Feni was trained informally by the late Garth Stead and the Icon Photography Group, and Jenny Altschuler’s 1999 Drumming Photography Workshops at the Iziko South Africa museum. A collaboration with the Iliso Lababantu NGO that supports township-based photographers encouraged Feni’s ethic of documenting his personal and community-related, ever-changing environment, as well as facilitating his inclusion in a group exhibition at the Cape Town Association of Visual Arts, AVA, in 2012.

Feni’s work has been exhibited throughout South Africa and abroad. In 2015 Feni was awarded the Ernest Cole Award, which provided fellowship support for the completion of his series, “Water is Life.” Feni also published his first monograph from this body of work in 2017 and created a traveling exhibition of the series. 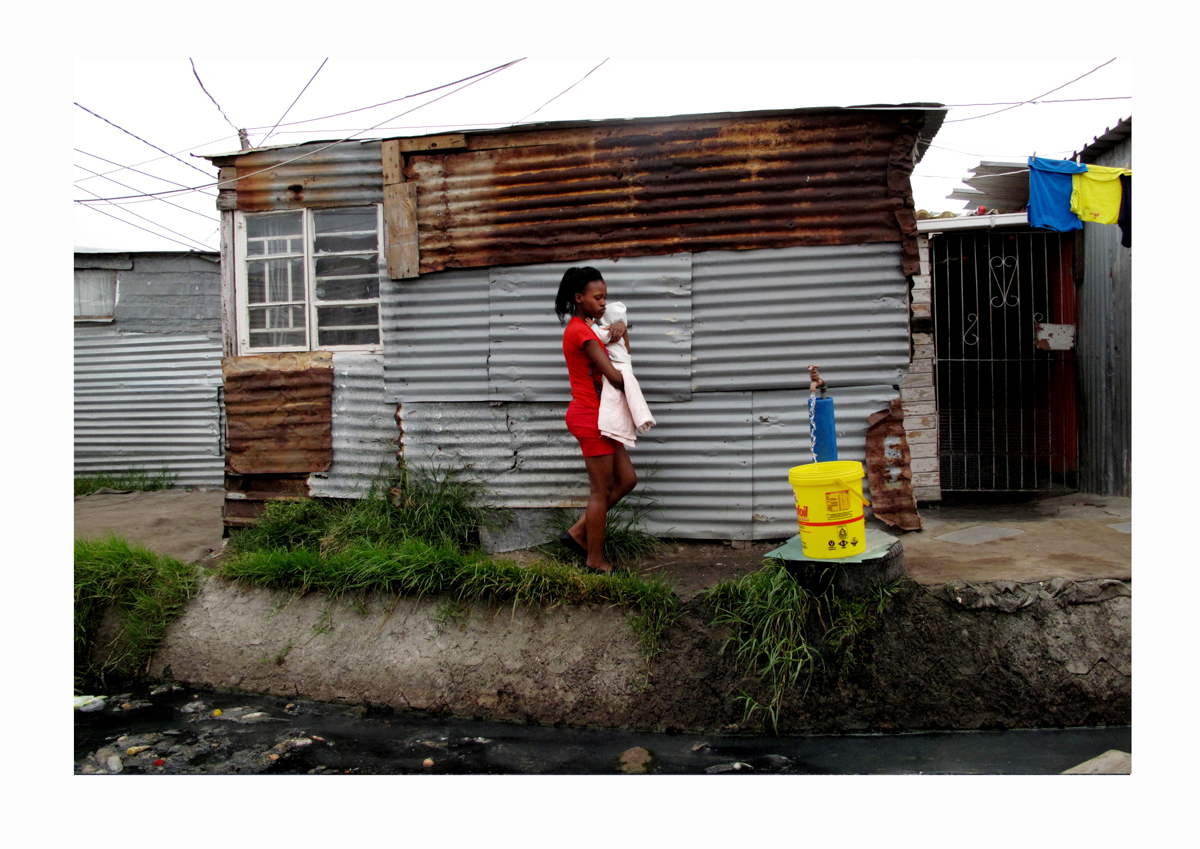 Section 10 of the South African Constitution says, “Everyone has inherent dignity and the right to have their dignity respected and protected.” Section 27 says that everyone has the right to have access to health care services and sufficient water. Yet, in spite of these promises, many people in South Africa do not have access to clean toilets and safe water, especially black working class people living in rural areas and townships, such as the one I live in. I live at the back of an RDP house in Mfuleni. There are not enough toilets. I experience the sanitation issues of the township first hand.

Since 2013 I have been photographing the sanitation problems in my community. It was never a pleasant thing for me to do, but because I experience the struggle for decent sanitation first hand, I realized I was in a good position to tell the sanitation story through my photographs.

My images show the problems of access to clean water and decent toilets as well as the challenge of flooding in some of Cape Town’s townships. These photographs have been published by Independent Media, Big Issue, Associated Press and GroundUp. They have been used in materials published by the Social Justice Coalition, a social movement that campaigns for better sanitation.

Marginalized people living in townships have continually faced sanitation since the era of apartheid. 21 years into our democracy, it is a reality that has stayed the same for many. It is dehumanising and undignified that people should have to live without access to decent sanitation. I hope that through this project I can bring greater public attention to this problem, and that this will lead to action to fix sanitation problems. – Masixole Feni 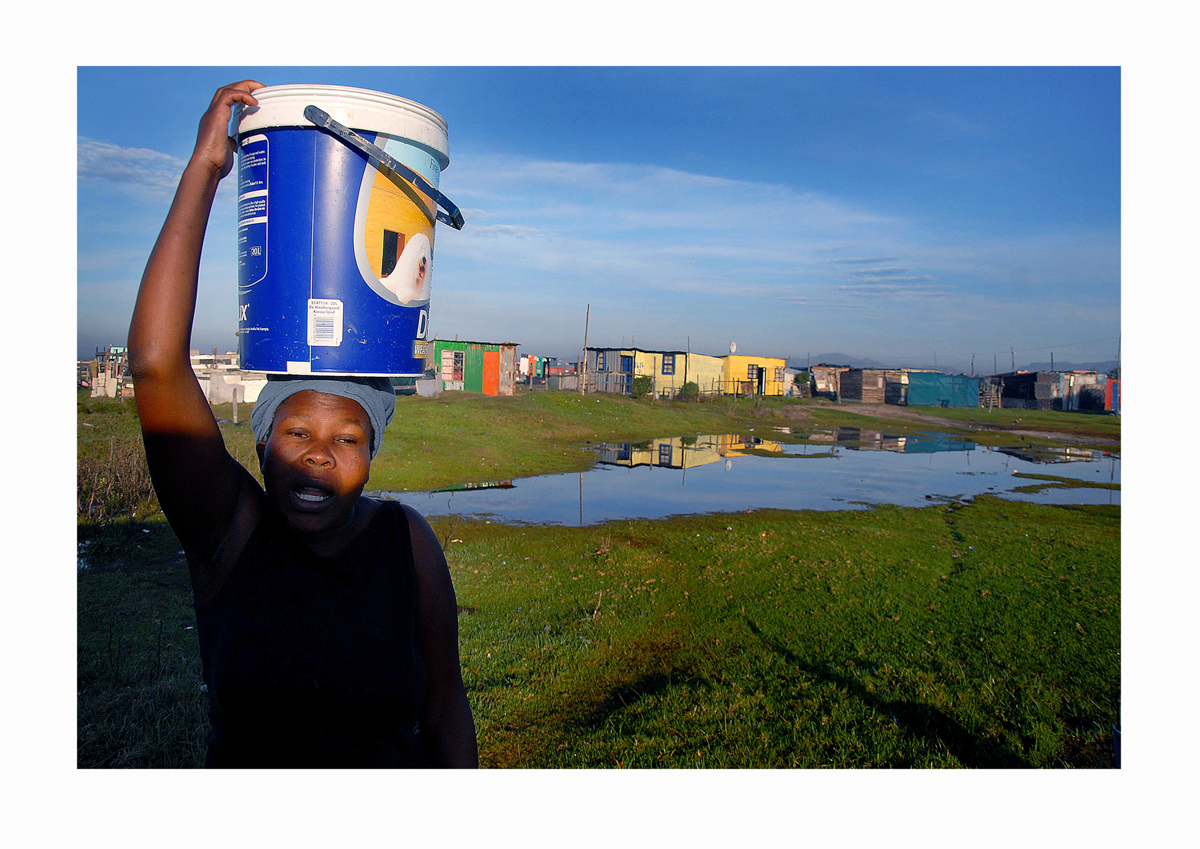 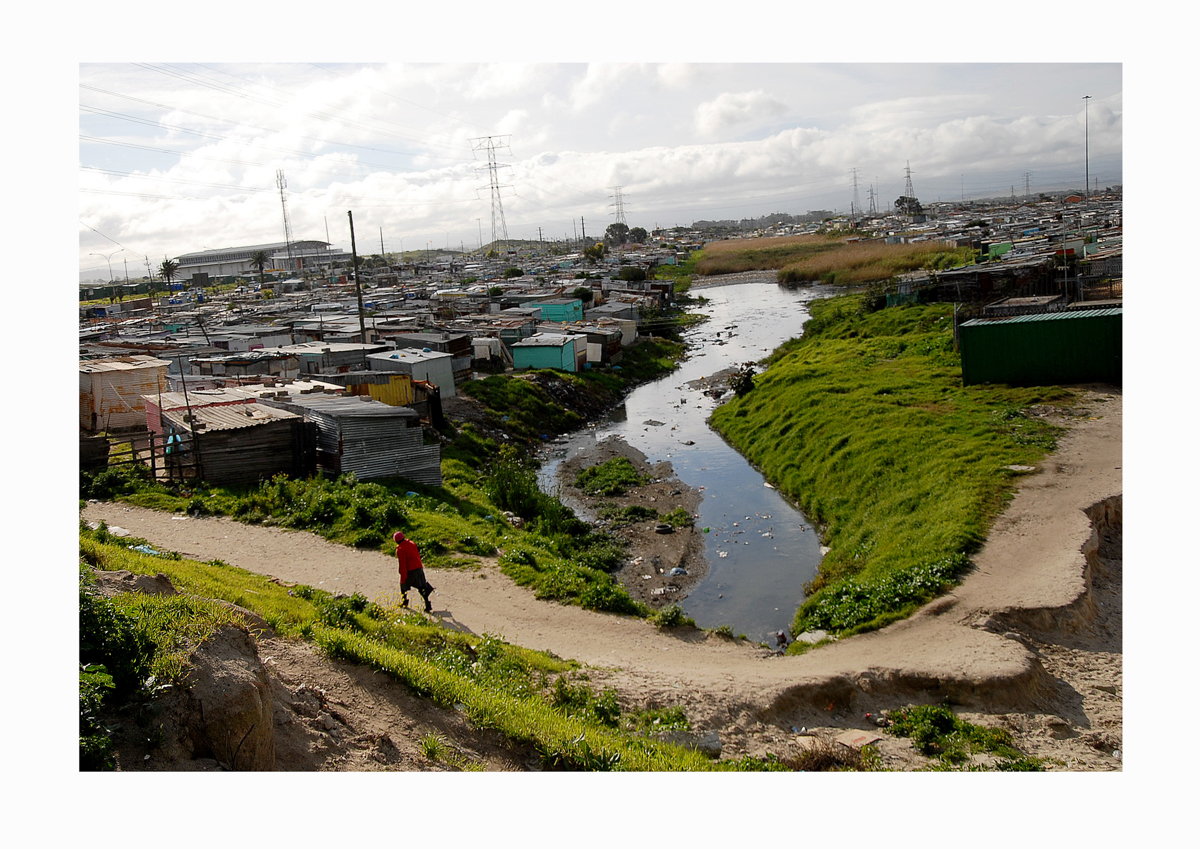 ©Masixole Feni, In many small parts of Khayelitsha people build in spaces that the city council won’t build because the land is privately owned 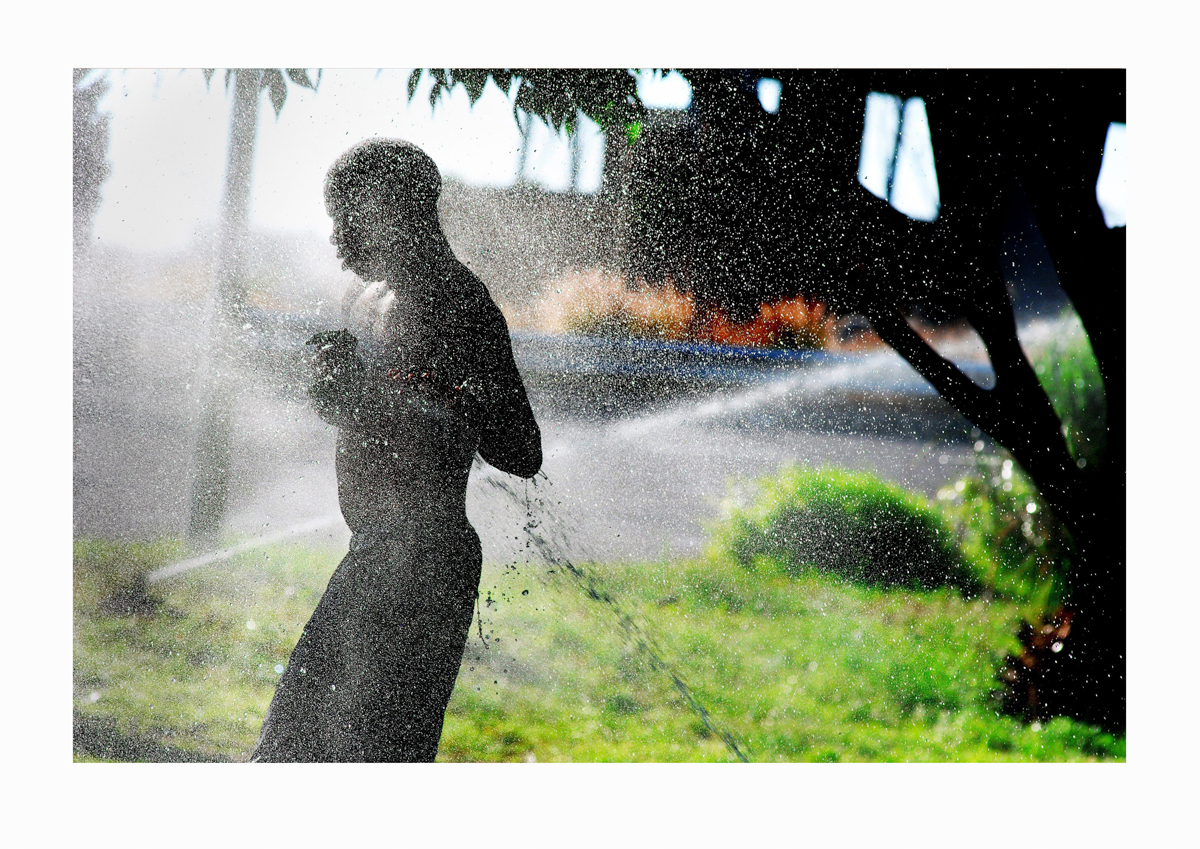 ©Masixole Feni, Access to permanent outdoor showers is a find rare, city bridges in the outskirts of the city centre, Cape Town 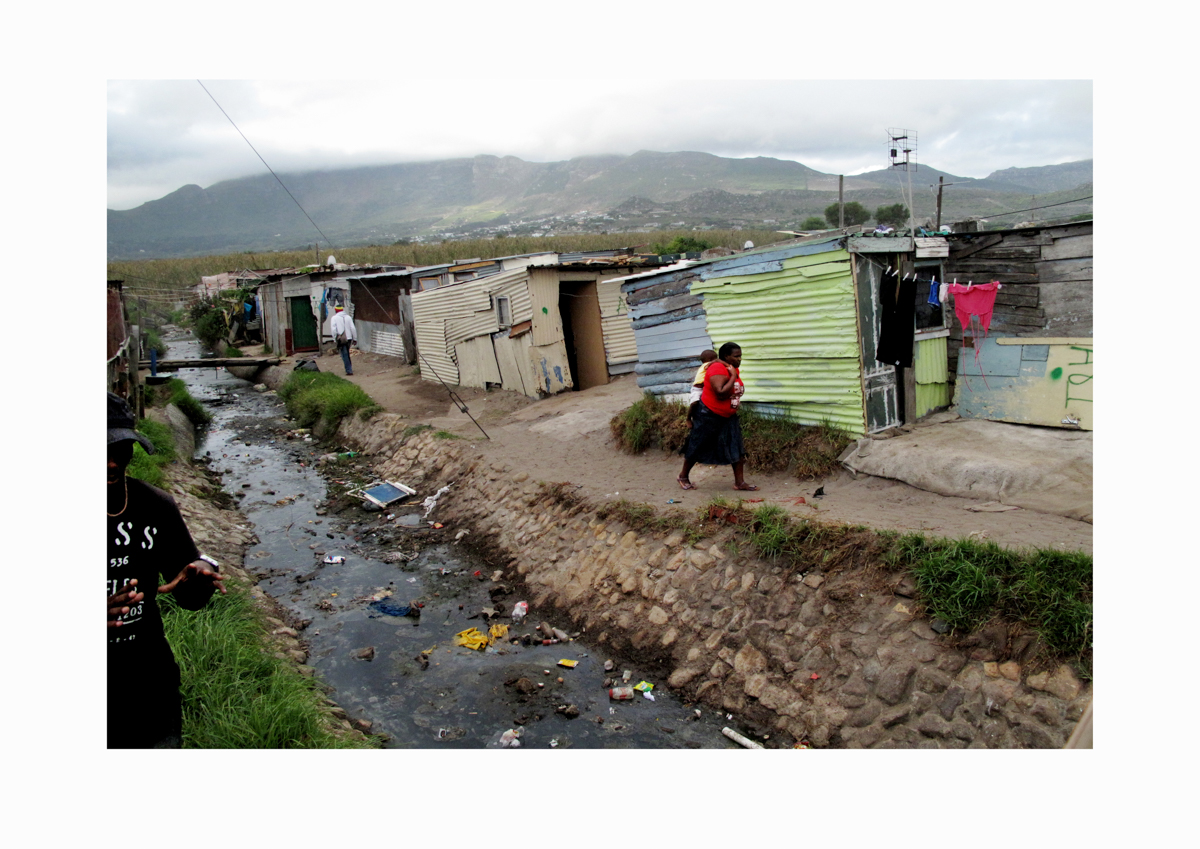 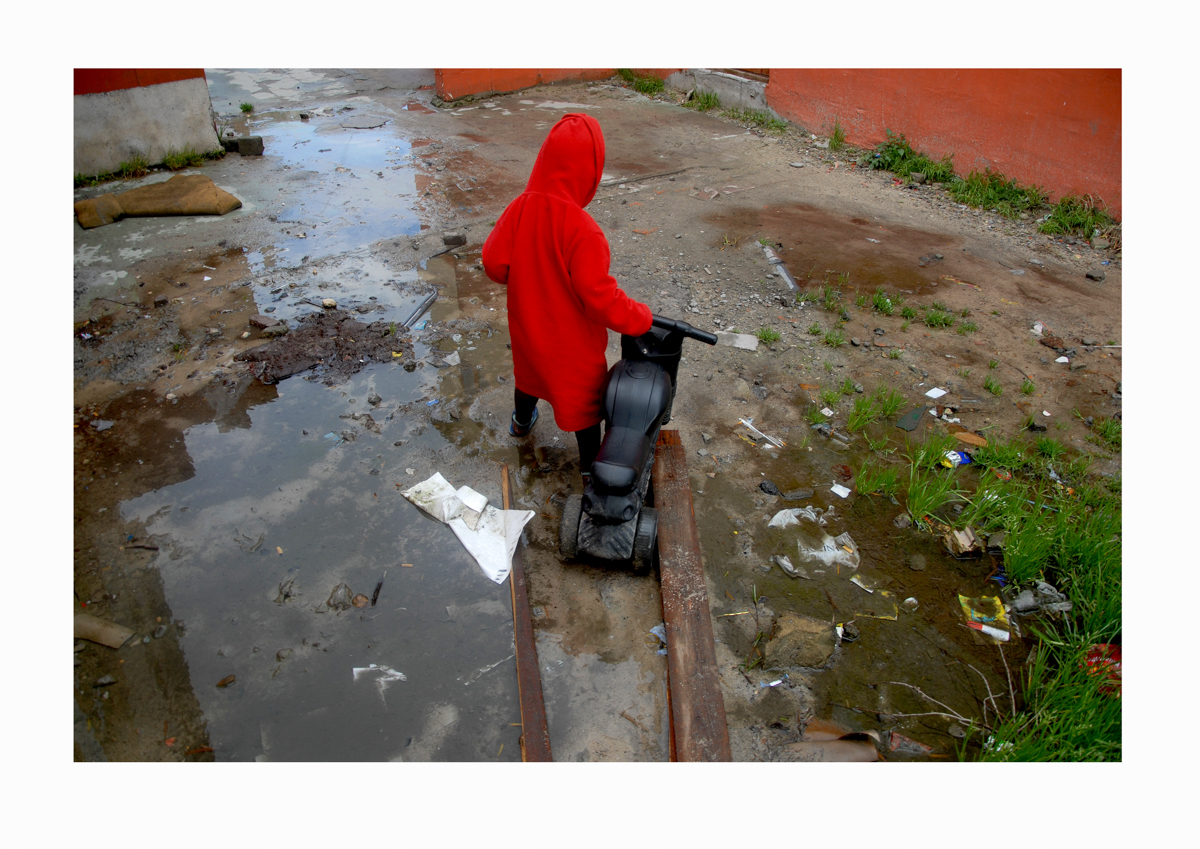 ©Masixole Feni, Child in red, playing in spite of the puddles 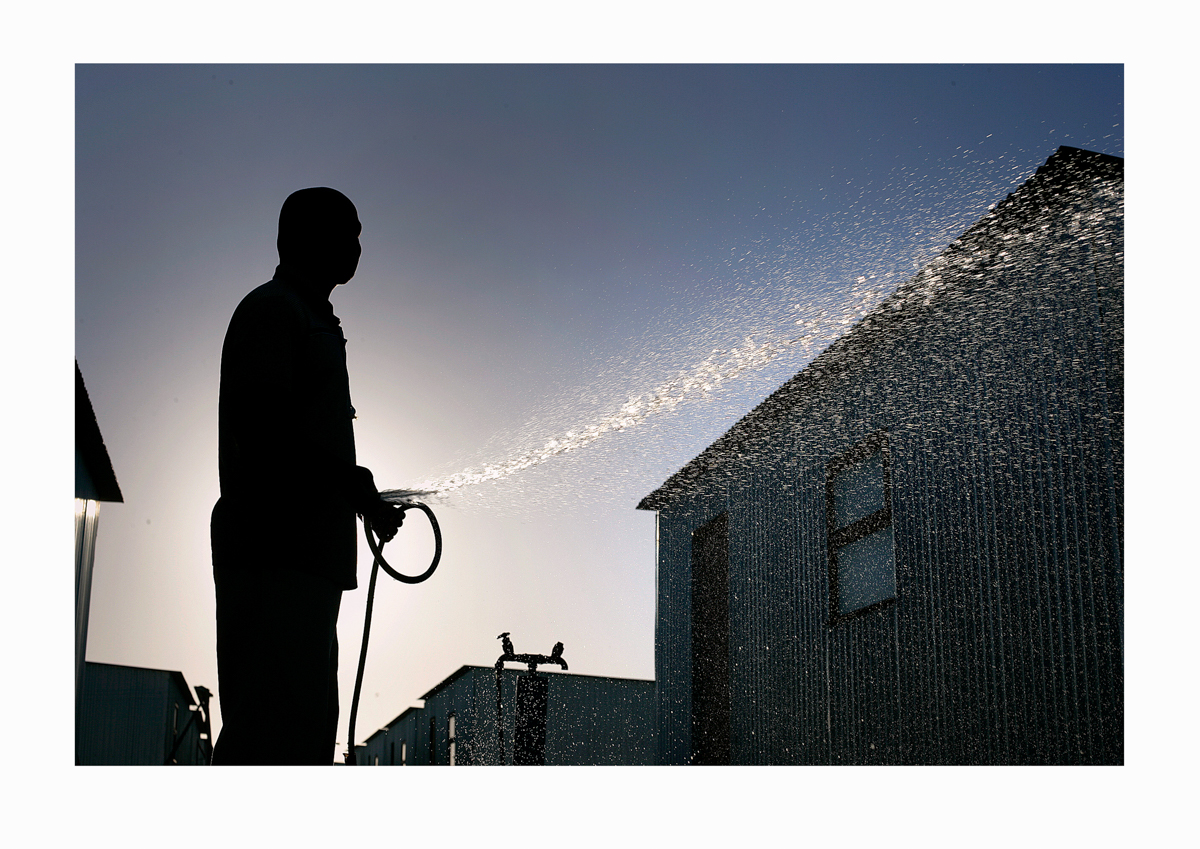 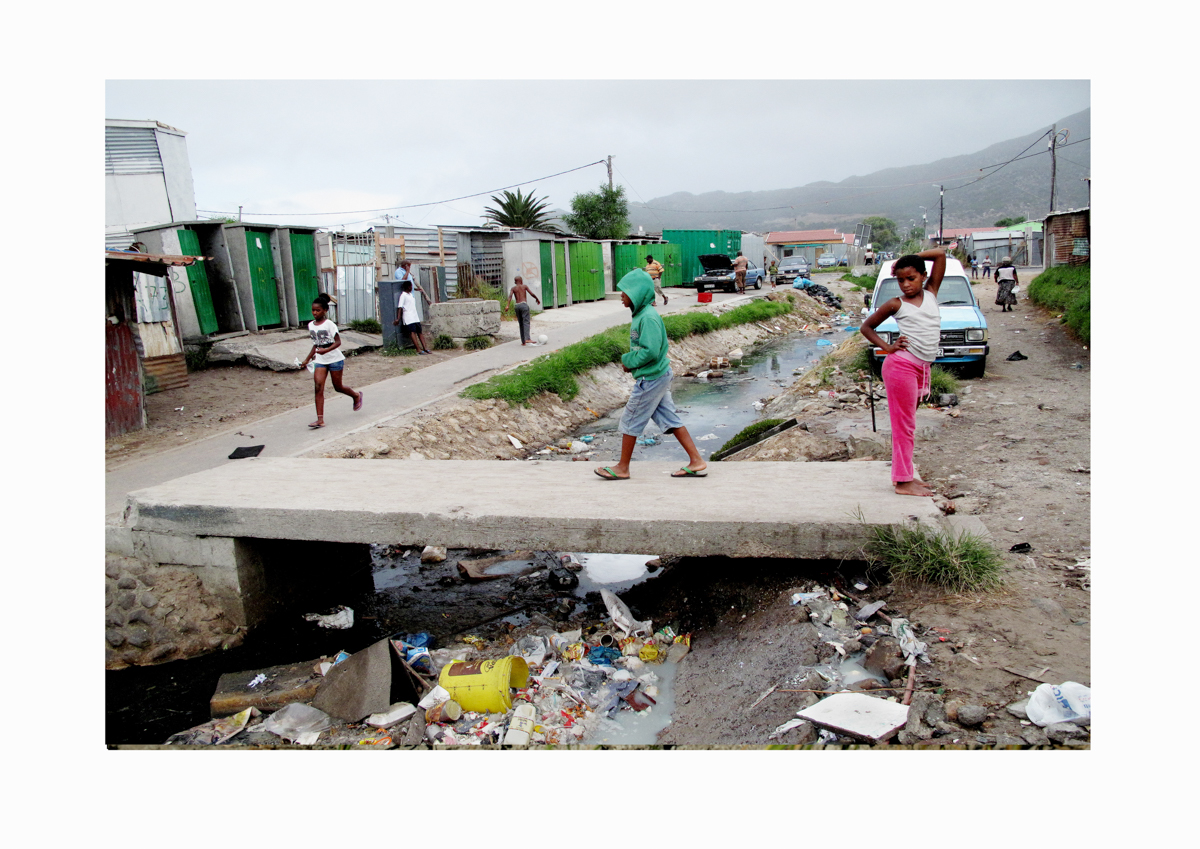 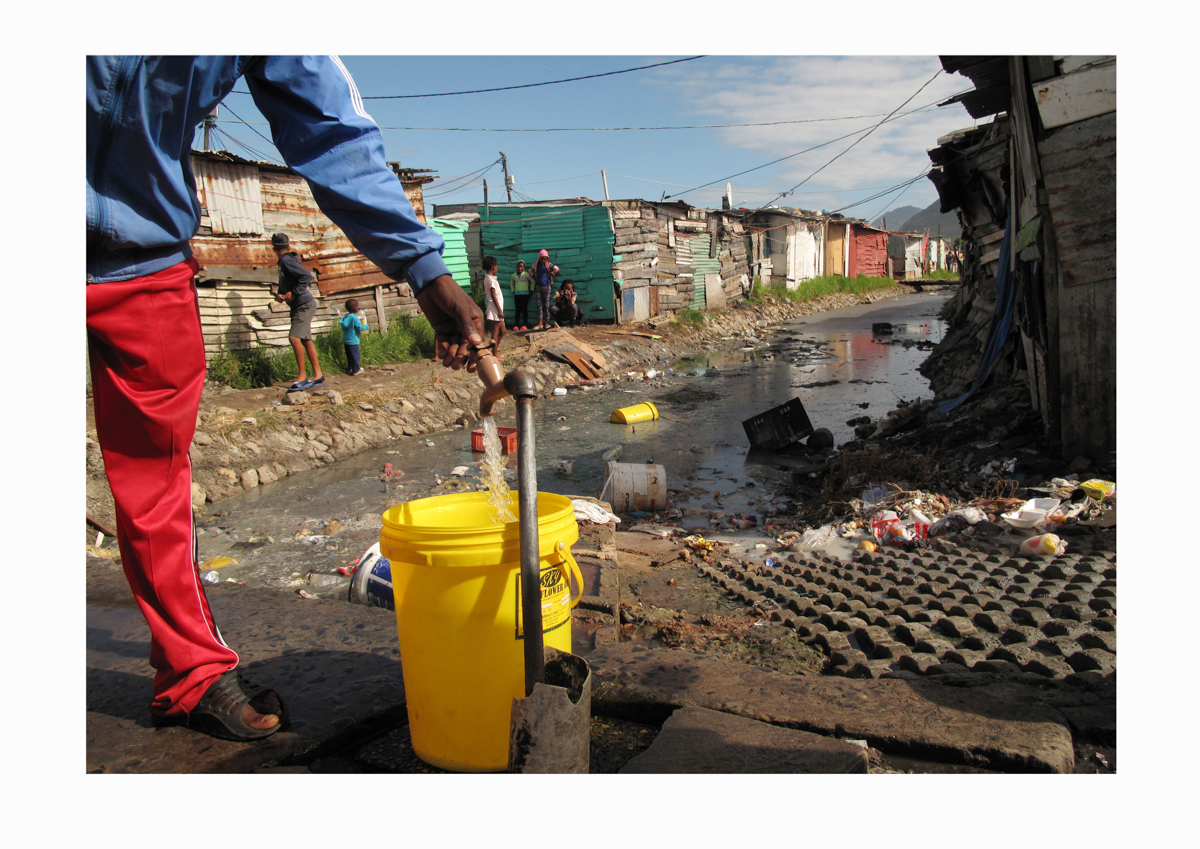 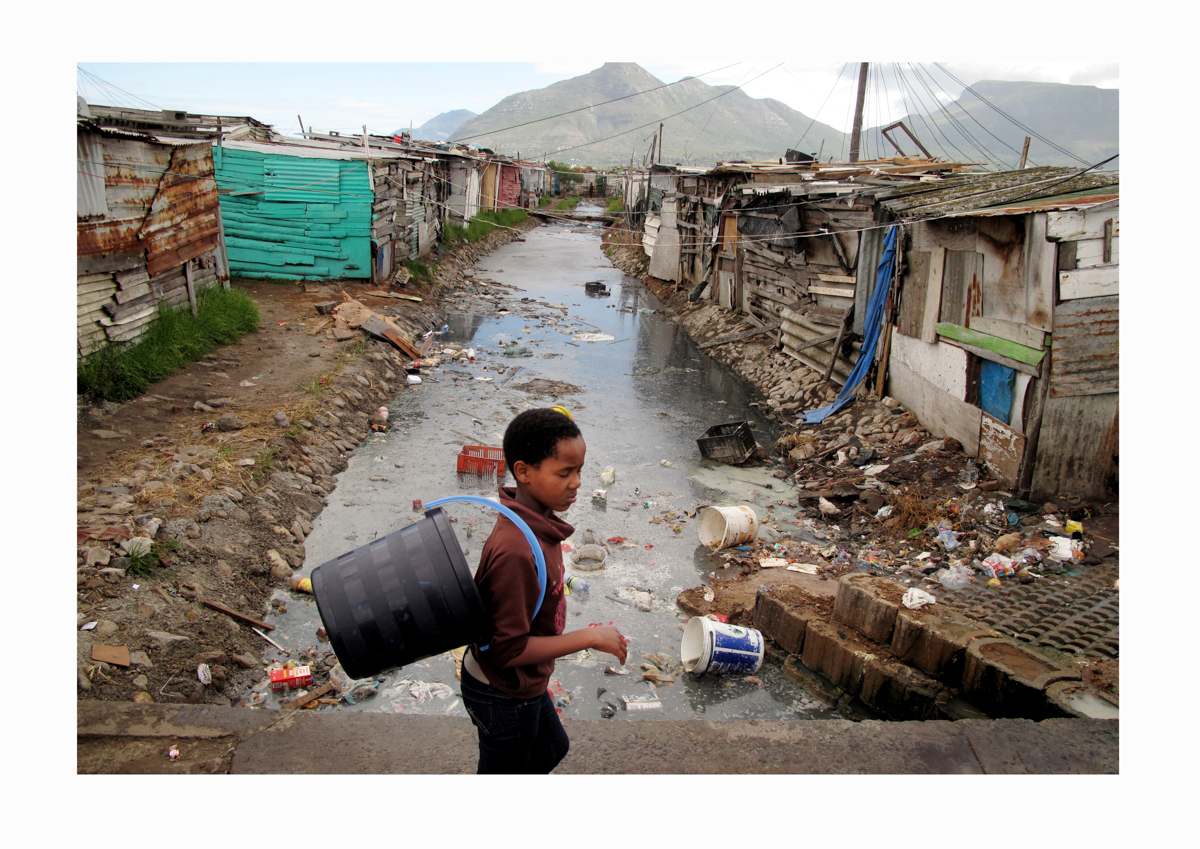 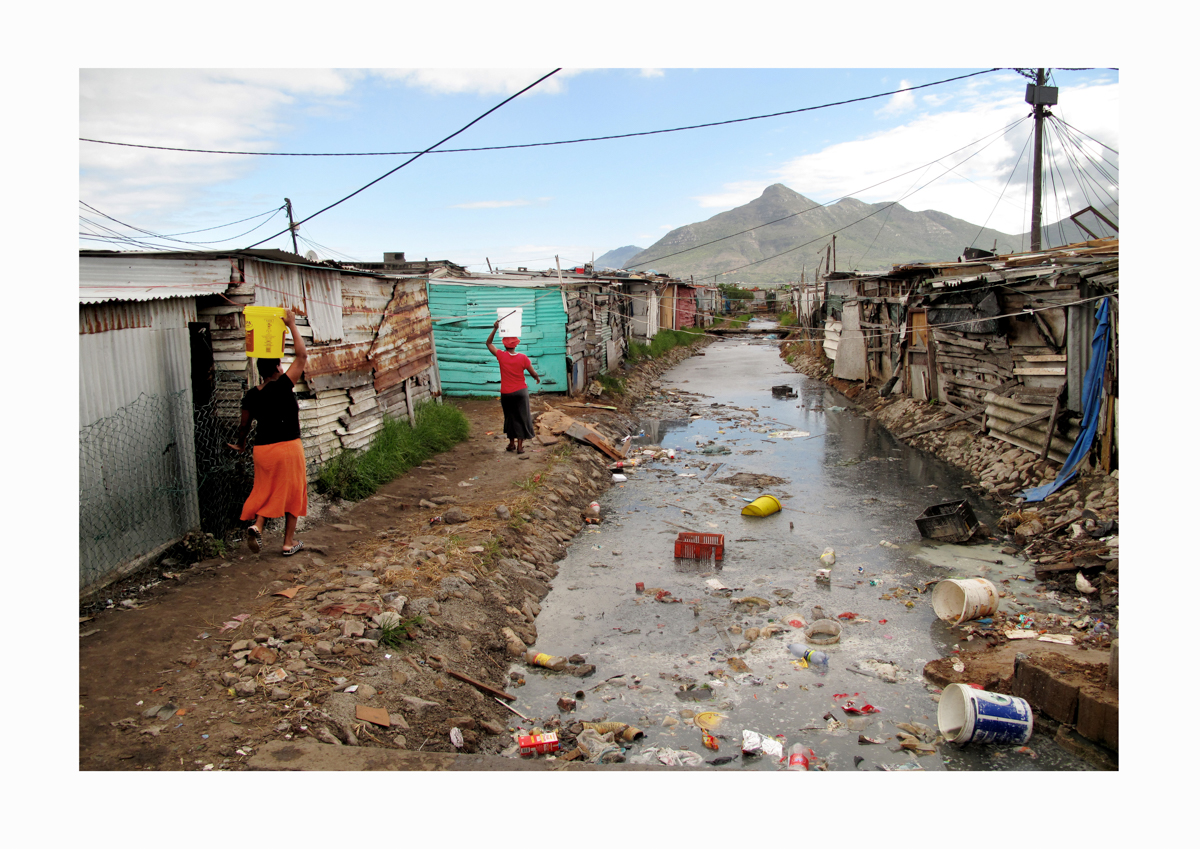 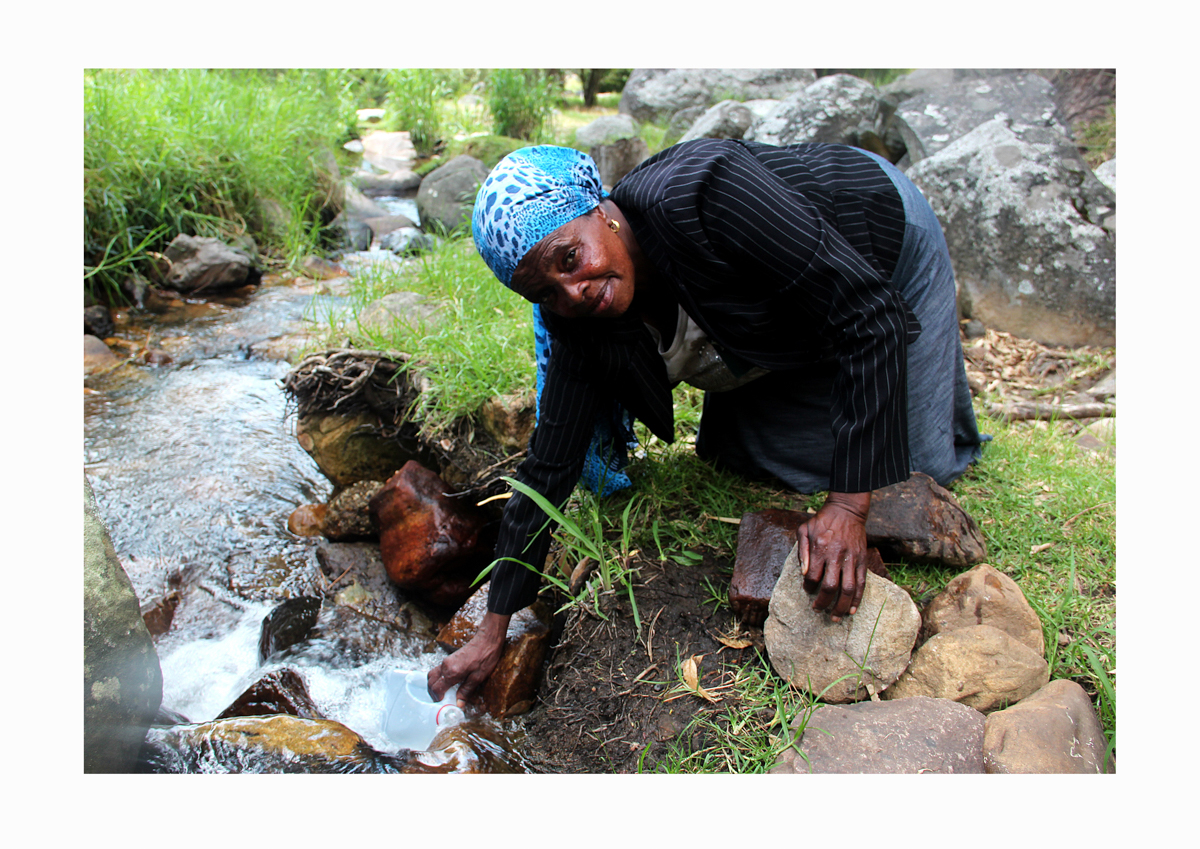 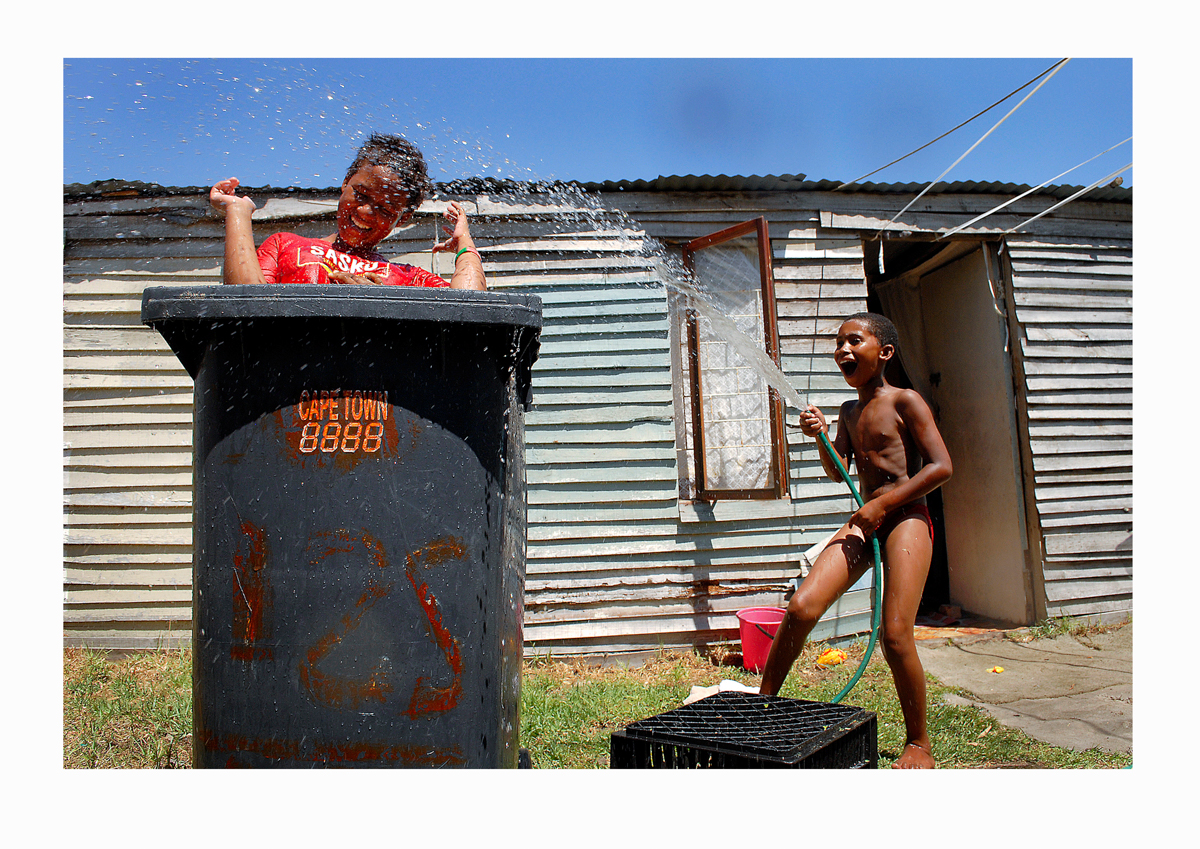 ©Masixole Feni, Veronique and Jason playing inside a bin, cooling during a heat wave using a water hose, Mfuleni