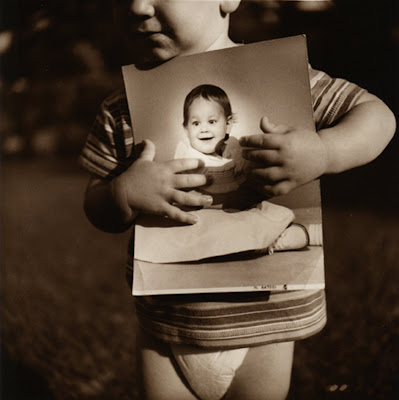 In 2006, there were close to 10 million people living in Los Angeles County. Today, that figure could be much, much higher.
Keep that fact in mind while I relate this story…a number of years ago, I produced a body of work titled, People I Don’t Know. I had been collecting found photos at flea markets and thrift stores and wanted to figure out a way to use the images and bring them back to life. I found models that were the same age and same sex as the person in the image and asked them to hold the photograph, hoping psychologically that viewer would connect the face in the photograph with the body of the model. Fast forward to this weekend. A friend of mine gifted a piece of my work (her choice) to one of her friends as a birthday gift. The friend was spending time going through my site and came across the series. She clicked on the above image which sent chills down her spine. The photograph was her baby photo, the same one that is hanging in her mother’s bedroom. The world is, indeed, a small place…and now, at least with that image, I need to change the title to People I Know Now but Not Then.