The Digital Darkroom at The Annenberg Space for Photography by Aline SmithsonDecember 22, 2011 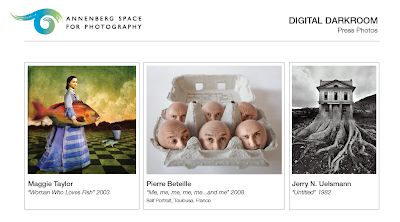 Each artist is a master of different types of digital techniques: compositing highly layered imagery, working in 3D and lenticular imaging, meticulously stitching together images, using lighting in highly inventive ways, and so on. 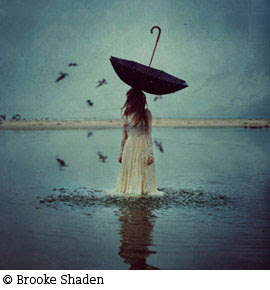 The show will present an interesting juxtaposition of young artists immersed in digital work against Uelsmann, a master of darkroom compositing techniques. The artists come from a range of backgrounds, each specializing in fine art, commercial art, portraiture, still life, fashion, architectural, or other types of photographic and illustrative expression. However, many of the artists cross genres and combine multiple techniques to create their unique work. 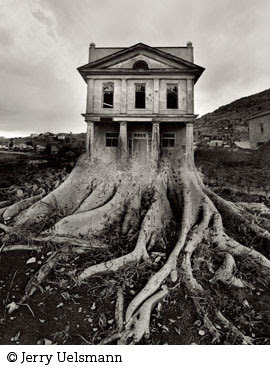 Digital Darkroom is comprised of an 80-image print show with 2-6 images contributed by each of the featured photographers. Hundreds of additional images from Digital Darkroom’s photographers will also be showcased in vivid detail on the two 14′ by 7′ high-resolution screens in the Photography Space’s Digital Gallery. 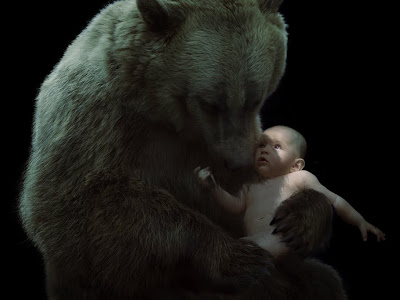 Serving as curatorial advisor is Russell Brown, a Senior Creative Director at Adobe Systems Incorporated and an Emmy Award-winning instructor. Brown was instrumental in the introduction of Adobe Photoshop, which transformed the techniques used to manipulate images. Renowned for his entertaining style as a Photoshop teacher, he has helped the world’s leading photographers, publishers, art directors and artists to master techniques that enable their digital creations. 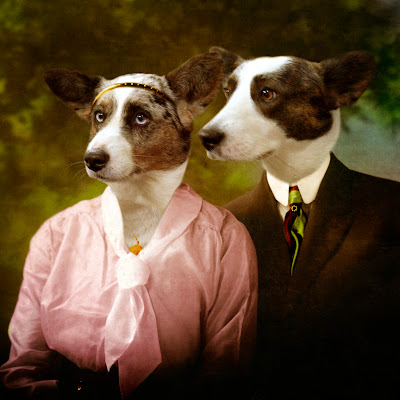 The exhibition includes a 3D film shot in 5K resolution using RED EPIC cameras, presented in a specially created screening room. This film includes interviews with 3D experts and historians Ray Zone and David Kuntz, 3D artists Ted Grudowski and Christopher Schneberger, and explores how 3D artists Claudia Kunin and Mike Pucher photograph their subjects and alter them digitally to create 3D results. Key elements of the history of stereoscopic photography are also in the film. 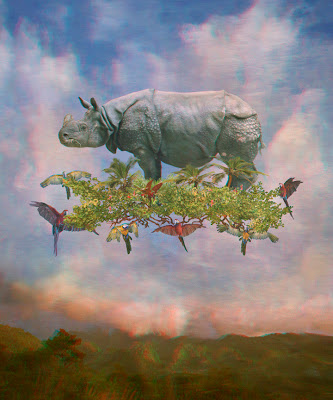 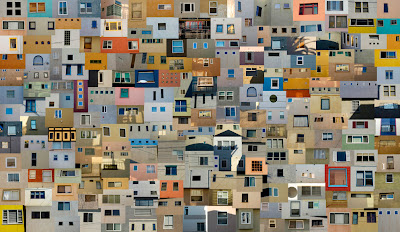 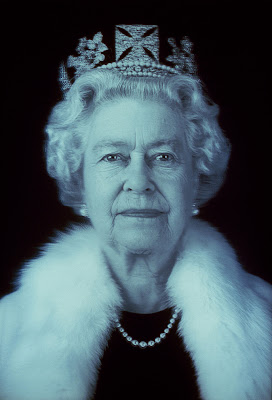 In addition to the exhibition, there are many lectures and events planned around this theme:

On the evening of the exhibit opening, Jean-François Rauzier, creator of the concept of “hyperphoto,” will speak on the process of assembling thousands of high-definition close-ups into gigantic works with extreme precision. Rauzier is the recipient of numerous honors including Arcimboldo and Eurazeo awards, and his work is featured in Digital Darkroom.

Specializing in the art of self-portraits, 24-year-old photographer Brooke Shaden will discuss some of the many tools that the digital world has given us not only to create the worlds we want to live in, but the worlds that live inside every one of us. Her work is displayed in the Digital Darkroom exhibit.

Joel Grimes has been working as a commercial advertising photographer for nearly 30 years. His assignments have taken him to every state across the United States and to over fifty countries around the globe, producing work for clients such as AARP, AT&T, Goldman Sachs, Hewlett Packard, Pfizer, Hyatt, Red Bull, Sony, Visa and Volvo. His work is featured in Digital Darkroom.

Michael B. Platt’s images typically represent life’s survivors and reference history, in particular, the African diaspora. A past recipient of a prestigious Franz and Virginia Bader Fund grant, his work is held in the permanent collections of many institutions such as the Smithsonian American Art Museum, the Library of Congress and Howard University’s Founders Library.

The recipient of two awards in the 2010 Prix de la Photographie, Paris, for her fine art, Claudia Kunin’s work is in the permanent collections of the Smithsonian, the J. Paul Getty Museum and the Museum of Photographic Arts. In her lecture, Kunin will discuss addressing visual concepts of ghosts and memory, and present images from her four bodies of work as well as some of her recent animations. Her work is displayed in the Digital Darkroom exhibit.

Jodi Cobb was the first woman to be named the White House News Photographers Association’s “Photographer of the Year.” In this presentation, Cobb retraces her groundbreaking career, including the project The Enigma of Beauty, an exploration through ten countries on six continents to investigate cultural notions of beauty and the science behind sexual attraction.

Note: This lecture was originally scheduled to run during the BEAUTY CULTURE exhibit but was rescheduled due to technical difficulties.

Ted Grudowski, Mike Pucher and Christopher Schneberger will speak about 3D photography and the role that digital technology plays in their imagery, including the technical aspects and the use of 3D photography as a way to explore composition and influence the viewer’s experience. Images will be shown in both 2D and 3D, including multimedia 3D slide shows. Their work is featured in Digital Darkroom.

Photographer Andrea Galluzzo will share images from the series Know Myself In All My Parts, and detail the technical process used to create the images, learned from her experiences working with medium and large format cameras and the chemical printing process.

Beginning as a traditional photographer with medium format film cameras, Douglas Prince soon began to explore alternative visions: combining images in the darkroom and making photo-sculptures with images on film. In the late 1990s his photo explorations led him into digital image-making. Prince has been passionately engaged in creative photography and has taught for the last fifty years.

Connie Imboden has spent more than 30 years using photography to examine, distort and redefine the human body. Imboden’s photographs, seen through the camera and free from darkroom or computer enhancement, display the strangeness of reality in an age of digital manipulation. She will discuss the technical issues involved in relying on her vision to transform the subject matter and how an intuitive creative process has kept her fascinated in the same body of work throughout the years.

Julie Blackmon’s work underscores the chaos inherent in motherhood with a style that acts as both documentation and caricature. Named American Photo’s “Emerging Photographer of 2008″ and one of PDN’s “30 New and Emerging Photographers” in 2007, Blackmon will discuss her start as a photographer, her process, her influences and what inspires her.

Josef Astor, winner of an Infinity Award from the International Center of Photography, will recount successes as well as failures in navigating the precarious conditions that surround an assignment; always with the goal of yielding an inspiring image that will satisfy the agenda of the client without stifling the serendipity of the moment. His work is featured in Digital Darkroom.

Paris-born photographer Lauren Marsolier’s latest project addresses the psychological experience of transition and our conflicting relationship to a world that is becoming increasingly fast-paced and dematerialized. In this lecture she will talk about her work and explain how the digital medium has been an essential component of her art practice.

Ann George is a visual artist who melds pixels, paper and paint to create compelling photographic fusions that celebrate her native Louisiana as well as the people, places and stories that move her. She attempts to portray the role of inspirational storyteller through imagery and looks for ways to satisfy her vintage eye in the camera, in the computer, in the printing and in the paint.