Michelle Rogers Pritzl: Those Whose Hands and Hearts are Pure by Aline SmithsonJuly 16, 2014 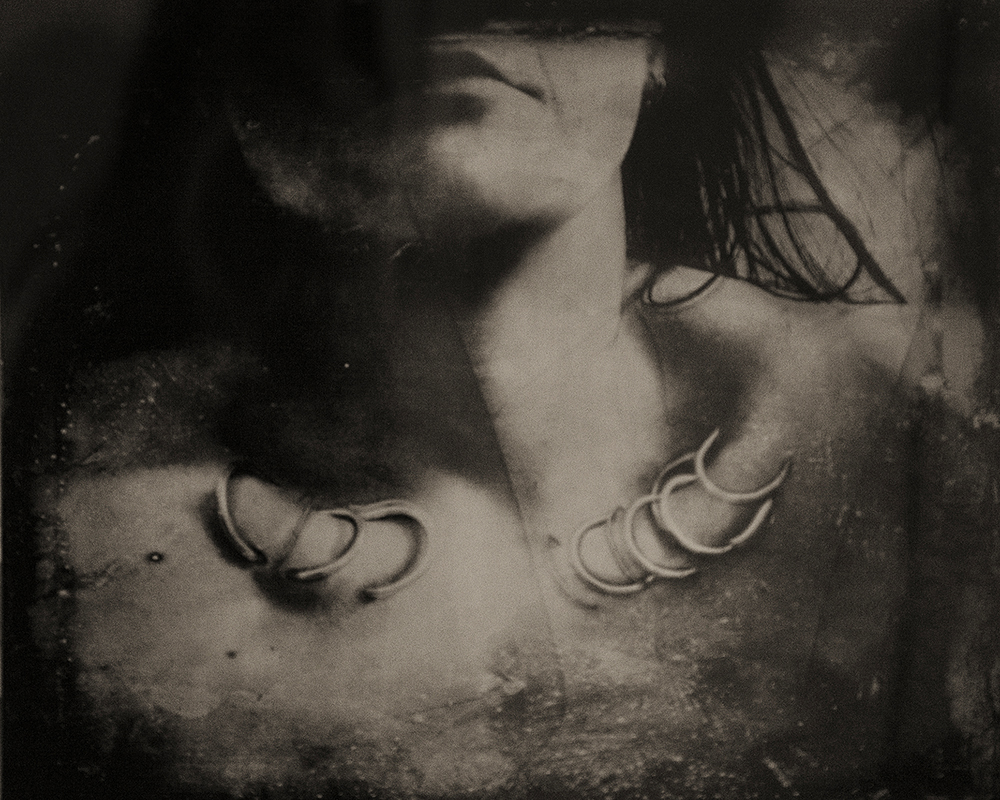 ©Michelle Rogers Pritzl, A Covenant with the Eyes

The work of Michelle Rogers Pritzl is being well celebrated these days.  Fresh off the boat with a recent MFA in Photography from Lesley University College of Art, she has a dance card filled with exhibitions.  Her work is currently on exhibition at Portrait/Process in St. Louis at the International Photography Hall of Fame Museum, the 20th juried show at the Griffin Museum, and the Center Forward AND the Alternative Processes exhibitions at the Center for Fine Art Photography in Colorado.  I had the great pleasure of meeting Michelle at the Griffin opening and appreciated knowing the artist behind her visceral and challenging portrait photographs. Today I am featuring a new body of work, Those Whose Hands and Hearts are Pure, the result of her exposure to the Evangelical Christian purity culture.

Michelle was born and raised in Washington DC, where she began studying photography in high school. Pritzl received a BFA from the Corcoran College of Art and Design in 2001, a MA from California State University in 2010, and a MFA in Photography from Lesley University College of Art, where she studied with Christopher James, in 2014. Michelle works in alternative and historic photographic processes, and has been widely exhibited across the United States. Michelle was a Critical Mass Top 250 finalist in 2013; she has been featured in Diffusion Magazine, Lumen Magazine and her work as been recognized by the International Photography Awards and the Prix de la Photographie Paris. 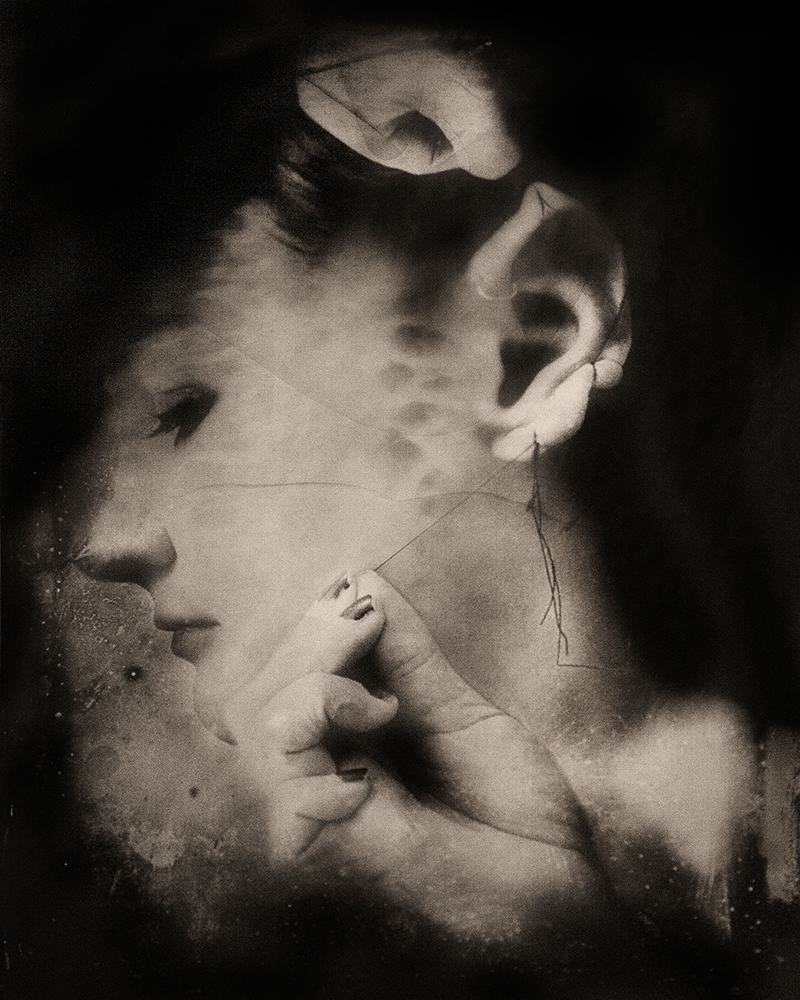 ©Michelle Rogers Pritzl, A Virtuous Woman is a Crown

Those Whose Hands and Hearts are Pure

Those Whose Hands and Hearts are Pure is a metaphor for the psychological damage inflicted on young women through Evangelical Christian purity culture. Through Victorian notions of patriarchy, young women are taught to submit, to be ashamed of themselves, their bodies, their dreams and ultimately to exist for the sake of the husband they will serve. In these self-portraits I play a character that performs or endures tasks which represent the inner workings of the psychological damage inflicted by these beliefs. This series tells the story of withstanding oppression and breaking free, although a theme of domination over the female character is woven into the images. This subtle reference symbolizes not only the way that bullied children hear taunts forever, but also subverts the intent of the Fundamentalist mindset and the control they seek over women. Each image is a 16×20” tintype, printed with a transparency in the darkroom, in a unique edition of 5. My digital workflow combined with the antique media of collodion references the antiquated view of women through the photographic process itself. 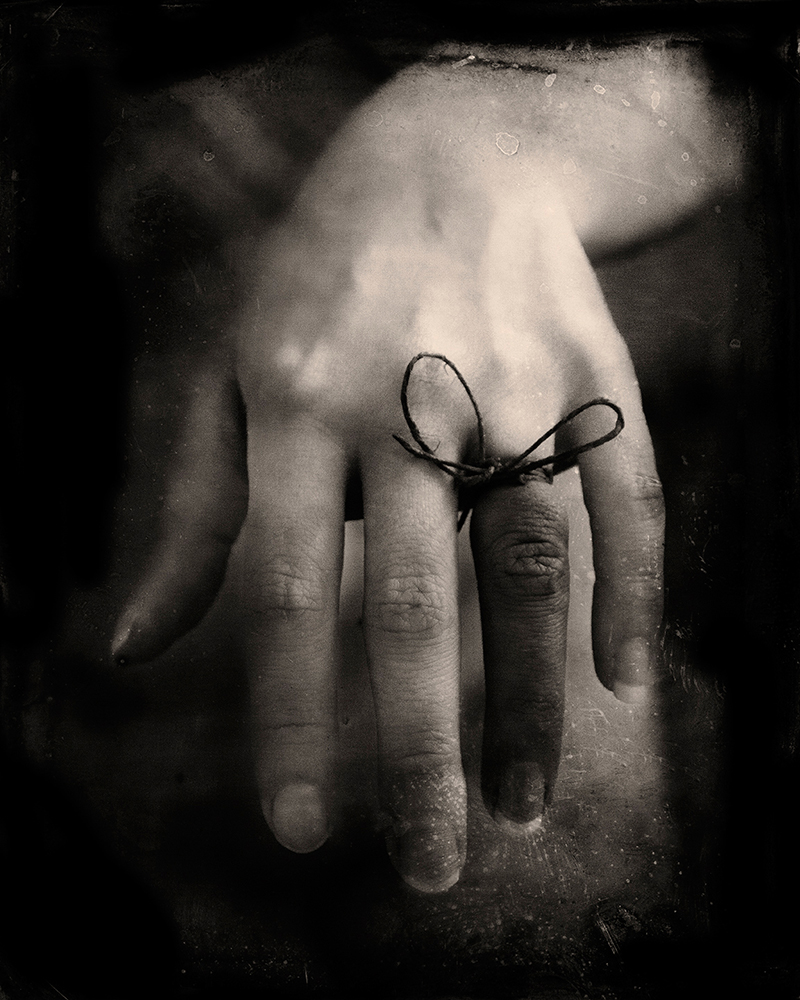 ©Michelle Rogers Pritzl, The Blessing of the Breast and the Womb 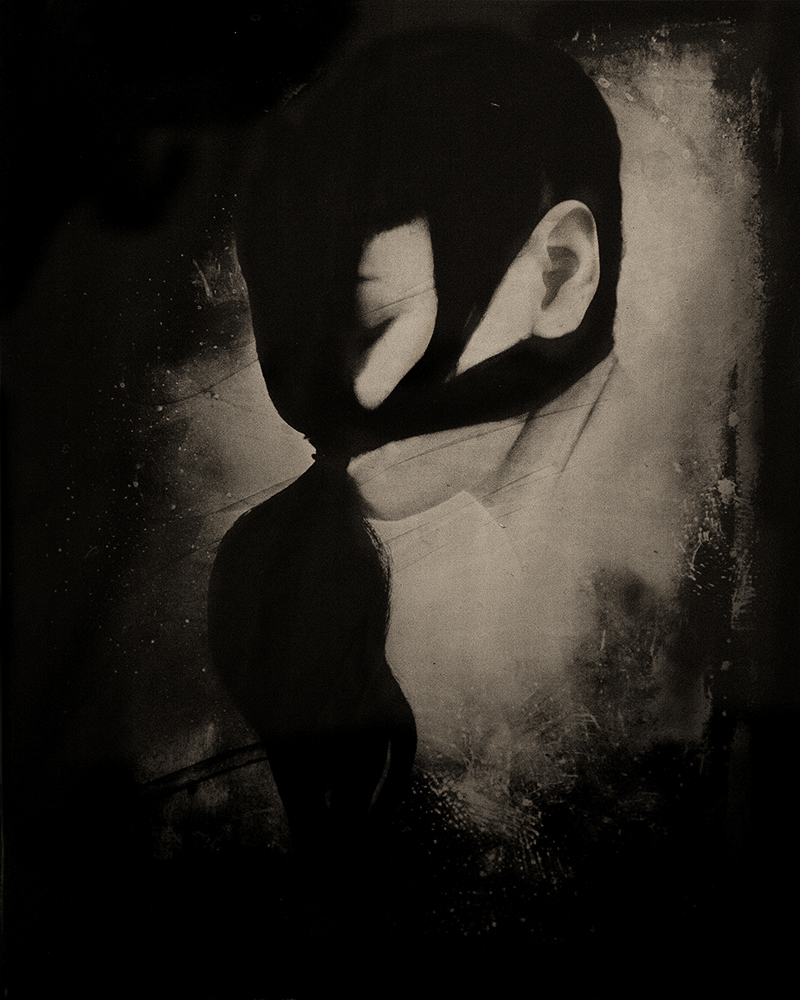 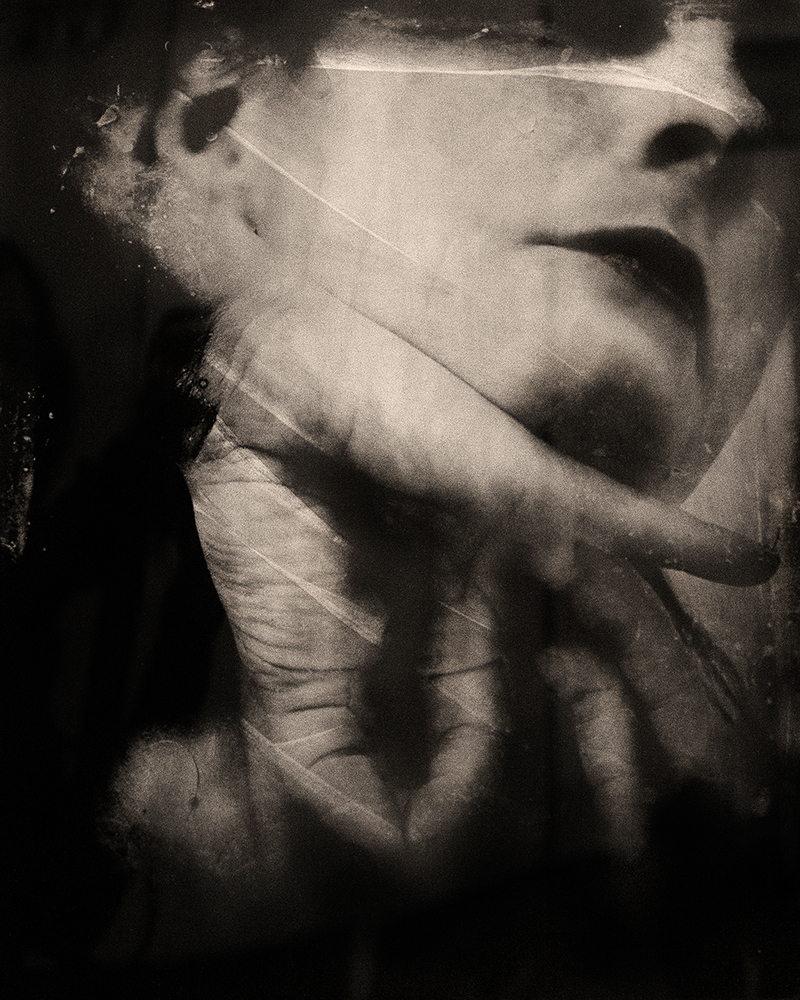 ©©Michelle Rogers Pritzl, The Wound of the Talebearer 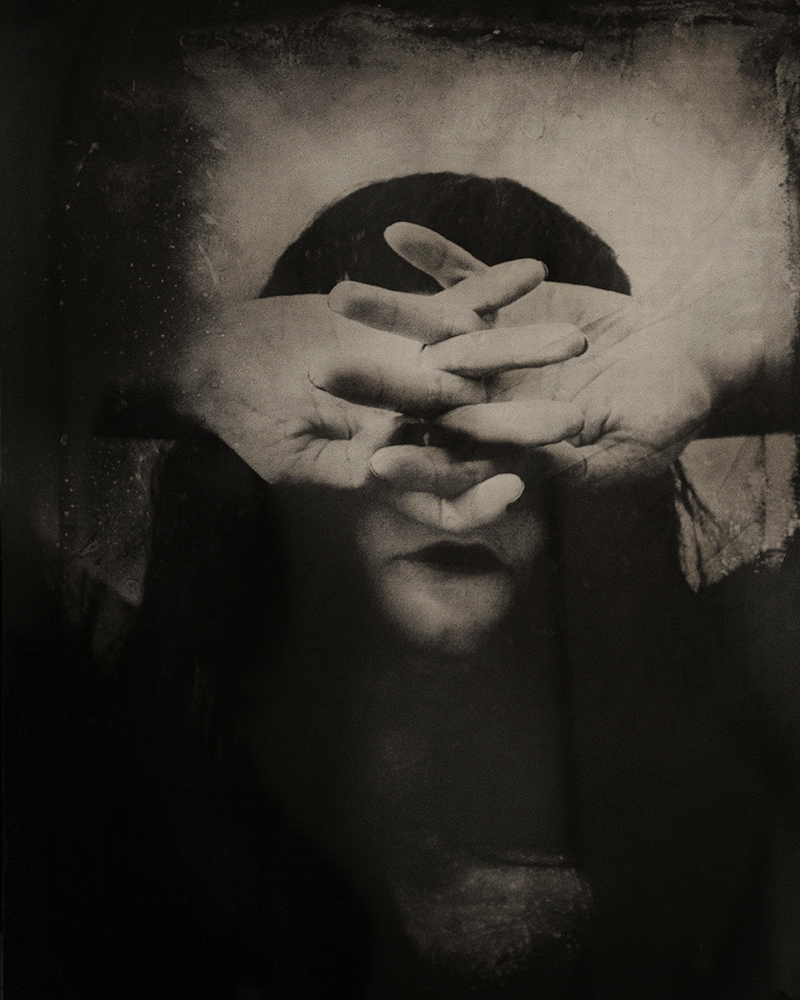 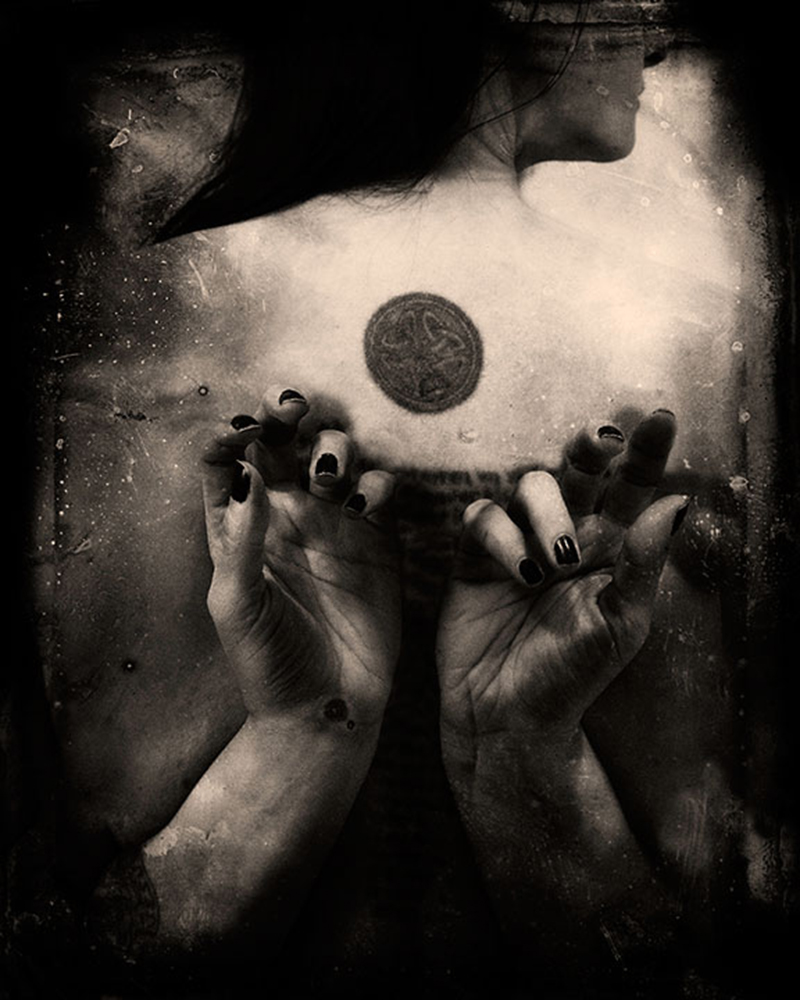 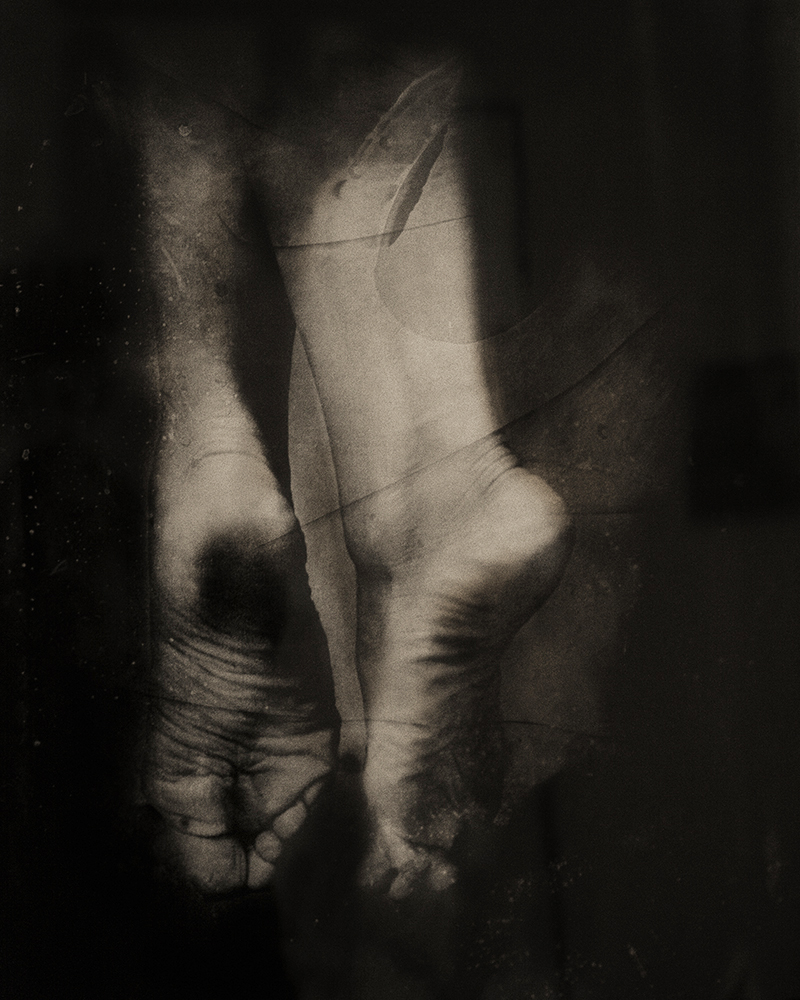 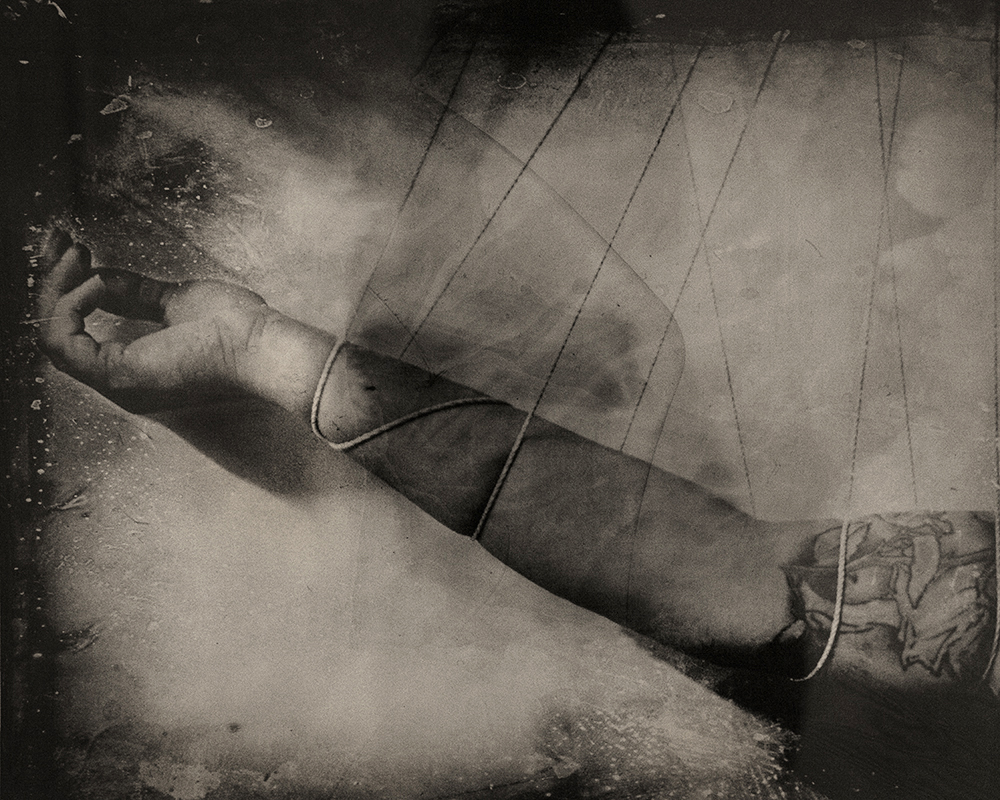 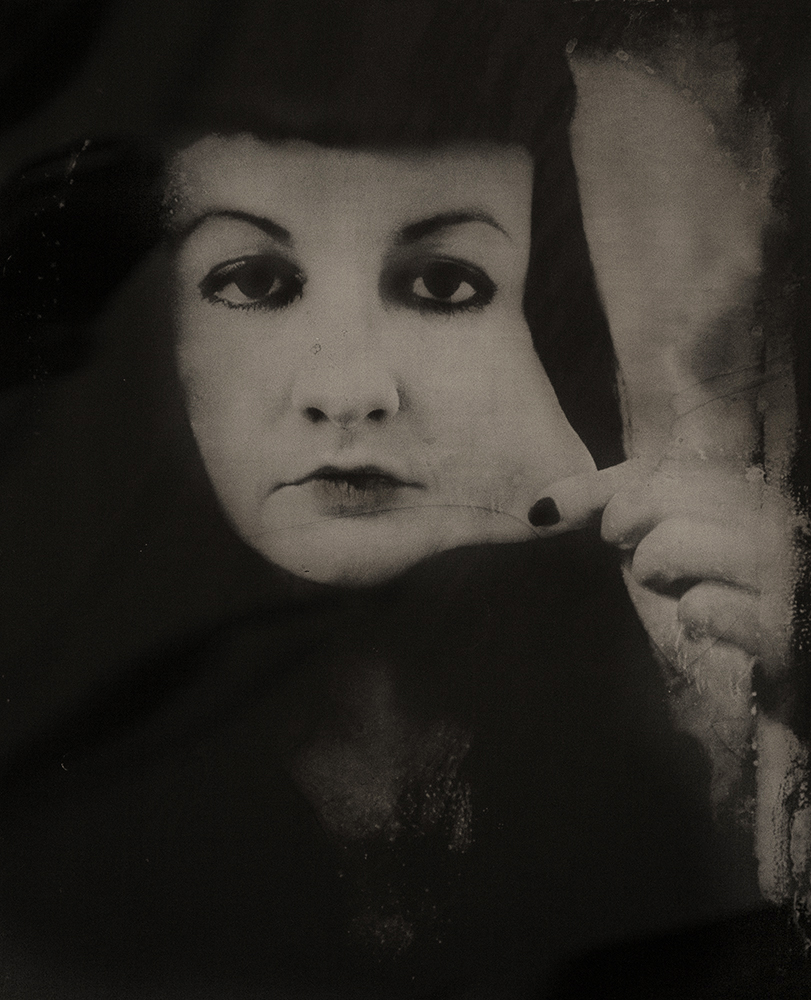 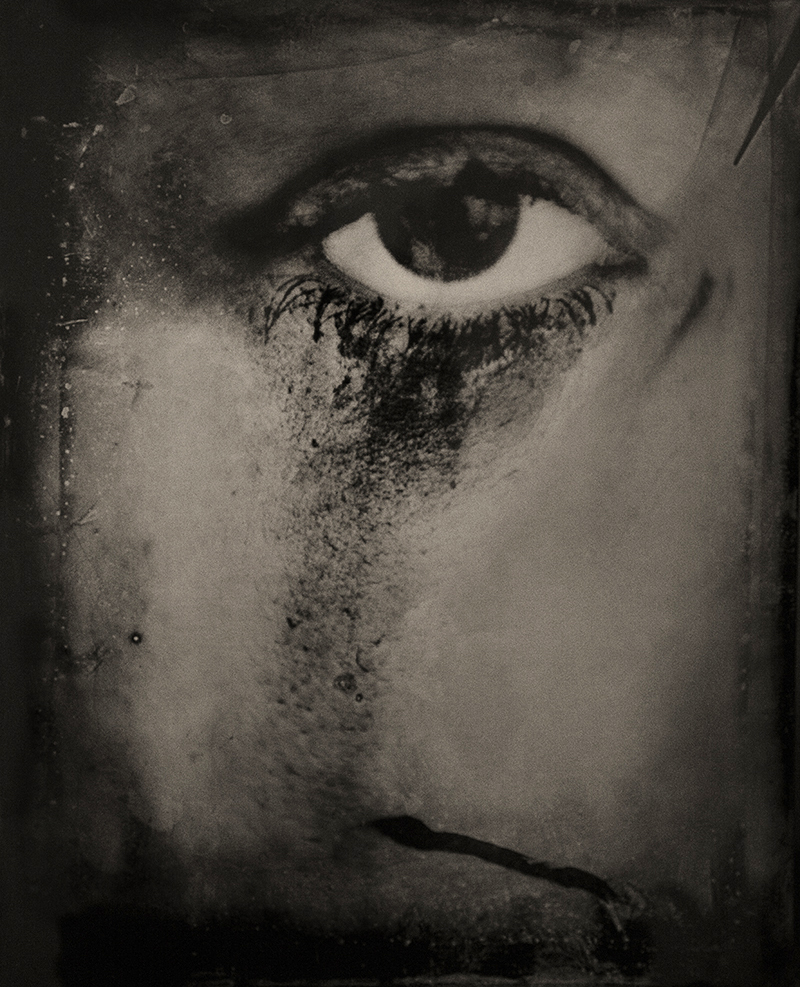 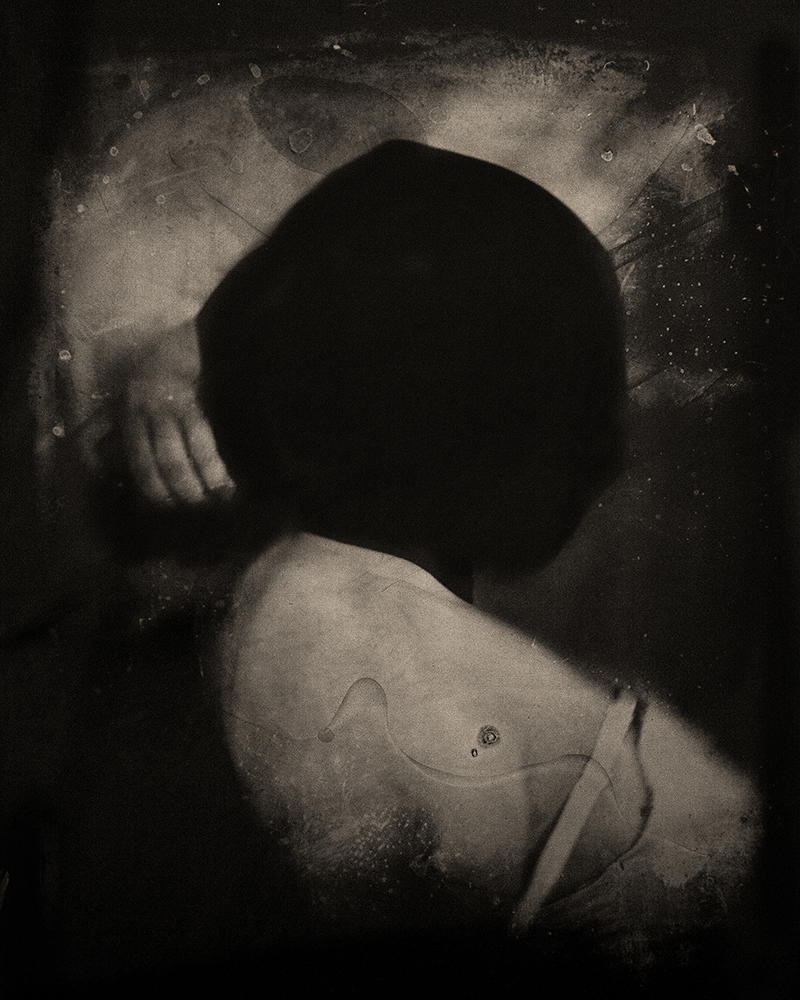