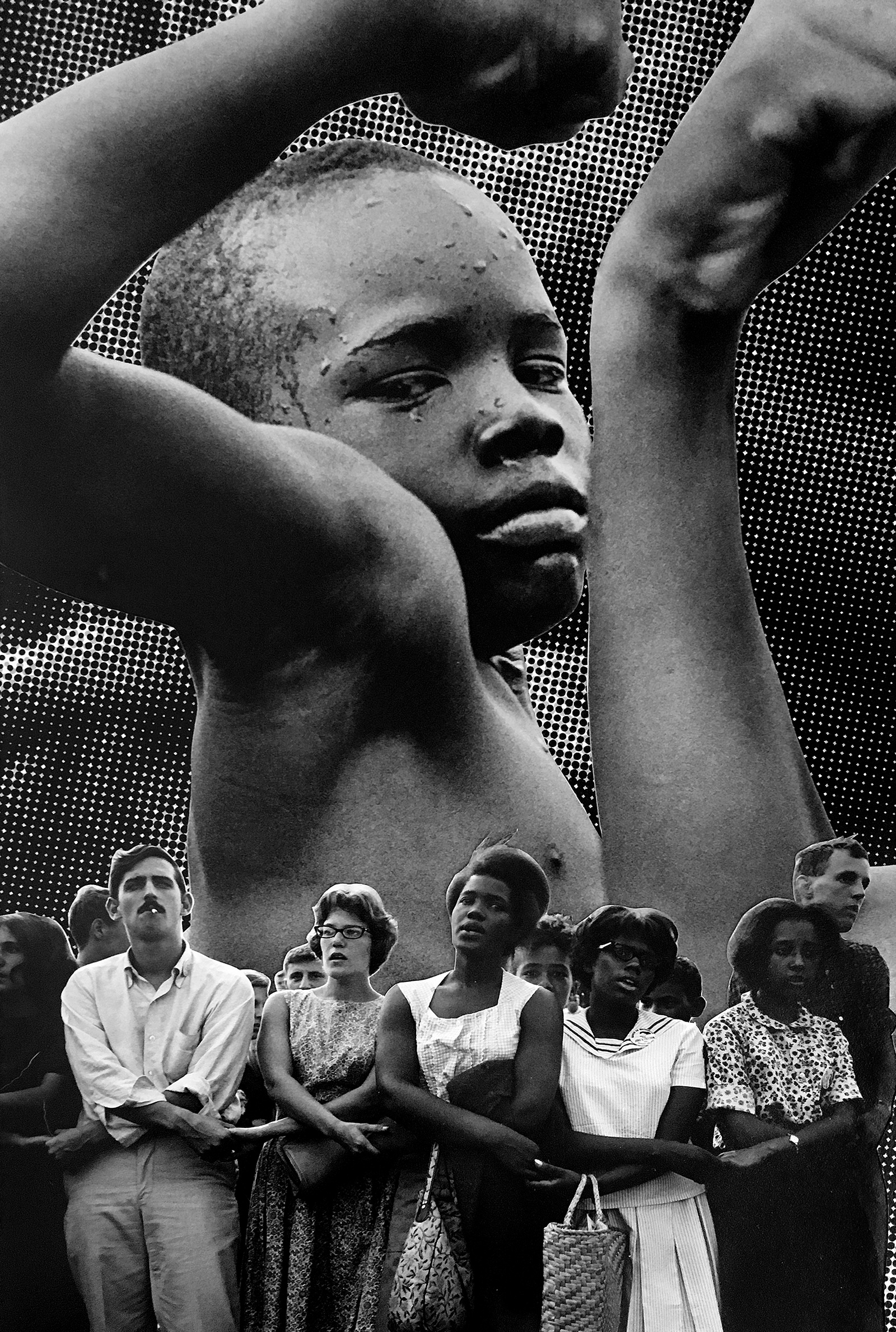 Multi-talented artist Daria Birang has a long and diverse career. She works as an art director, painter, editor for some of the best contemporary photographers and, of course, an artist who uses collage.  She uses images from a range of sources as diverse as fashion advertisements to photographs of the 2011 revolution in Egypt or the Civil Rights Movement in the United States. There is a reason for this. In our interview she says she “loves the diversity in fashion, beauty, journalism, reality, and fiction.”

There are several perspectives through which I could start this article, audaciousness definitely being one of them. The photographs Daria selects for her collages (for instance, those by Magnum agency photographers or renowned Dutch fashion photographers Inez and Vinoodh) are, by themselves, some of the finest ever produced. Being able to add other layers to these images while still carefully retaining the power of the original photograph is a bold statement in itself, but Daria goes beyond that. Her work reinforces, challenges, builds on, or distorts unexpected narratives and trains of thought, making them powerful tools to reflect upon. A narrative drift is voluntarily searched for, and intensity achieved. Good stories are told again and again, and even those of extreme simplicity end up being recreated or retold through different contexts, subjects, or standpoints.

Daria’s work shows us how one’s approach to a photograph or, better yet, the combination of fragments of several photographs, can expand the beauty and impact of an image and our interpretation of it to unforeseen elements and dimensions. There are many ways to achieve such a feat and Daria has a vast repertoire of them, but maybe one that is particularly interesting is the multiplicity of what French theorist and critic Roland Barthes called the punctum – that is, the detail that made the photograph- in several of her collages. The question is: how do we react when an image has several punctum or, to be rigorous, puncta? Such is the case with Civil Rights – Strong Boy, Civil Rights – Prayer, Riot 2, and Riot 3. And, in a different way, in Jim Jarmusch & Claudia Schiffer. A repetition, though not in excess, is one of the reasons why there is a continuous aggregation of intensity and narrative, providing new possibilities of what could be or what could have been to the point one could even talk of an exponential image, a fractal. Her work excels in these possible futures.

One last remark: these collages are extremely contemporary. American elections, racial injustice; these are times in which life- whatever the overall definition for that may be- has a particular resemblance to theatre and dance. These are plays that, with different actors and circumstances, get replayed every so often, although aesthetics change. Daria’s work provides both a contemporary and historical overview. 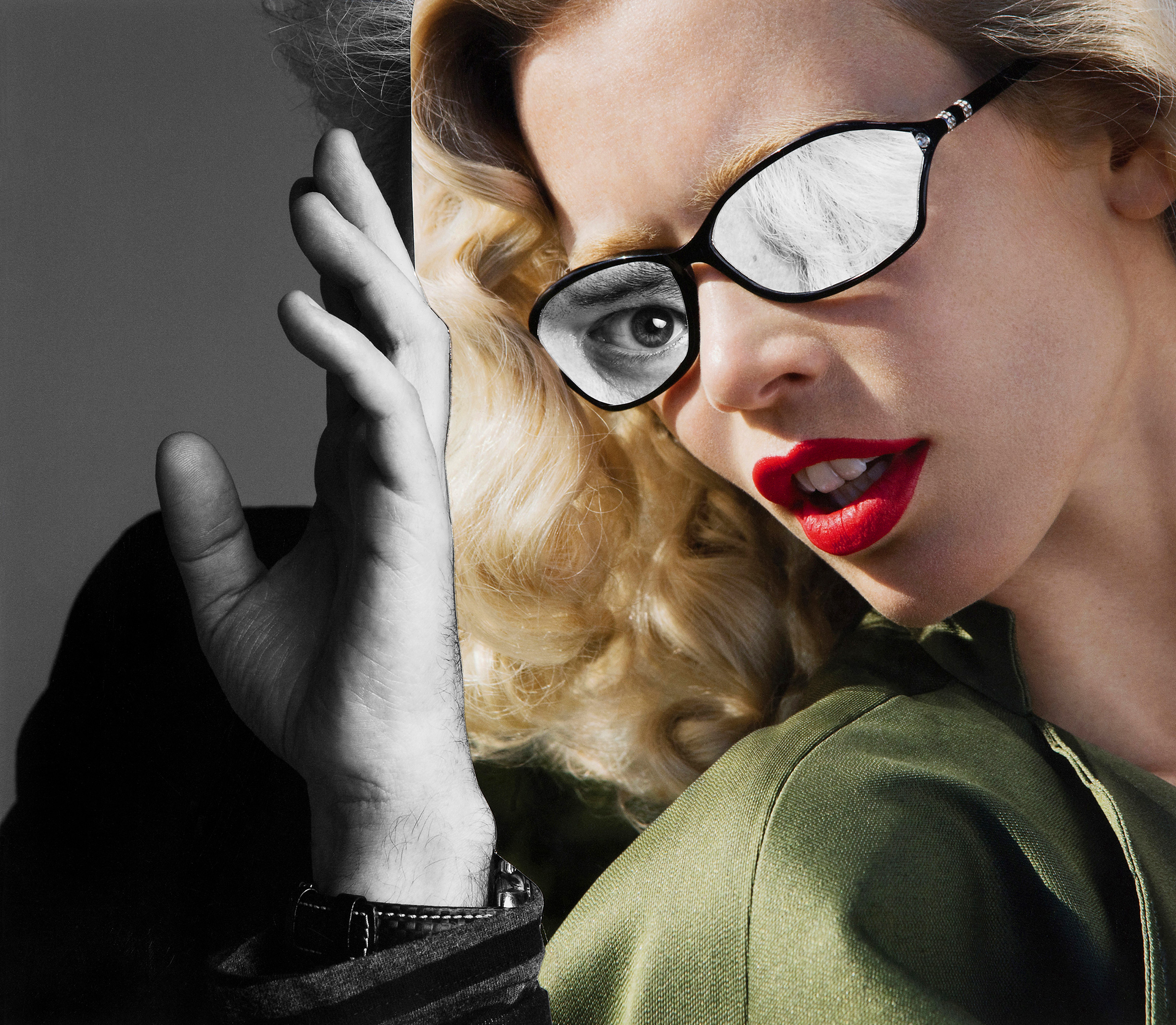 Carlos Barradas: It’s really interesting that you use material that’s already excellent and give it new meaning and strength without losing the intention of the original photograph. Can you elaborate on that?

Daria Birang: Maybe it’s because of the significance of the photographs that I tend to be careful not to ruin the image. Instead I give it a new meaning by taking away parts of the image or adding another one. I am very aware of the power of the initial image, and I try to find the parts I can use best with another. I usually don’t use more than two or three photos in one collage. I don’t build by using little bits, I construct by using parts, unless I use a lot of similar ones and make them dance.

I have been extremely fortunate to be able to use amazing photographs. I wouldn’t want to mess up an already beautiful, meaningful image. Sometimes I do think I could be a bit less careful when I make things, and when I paint, but that is a whole other story. 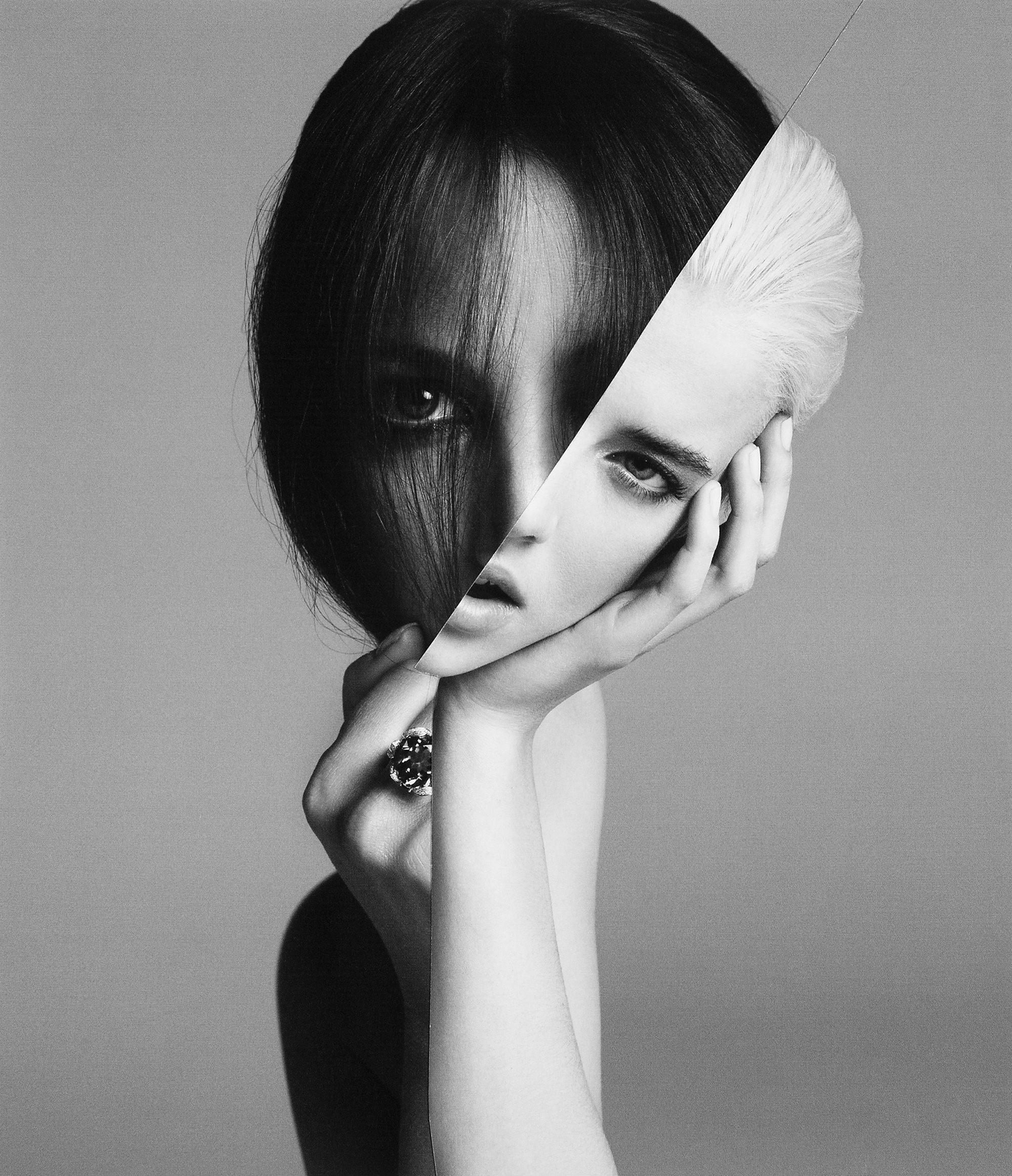 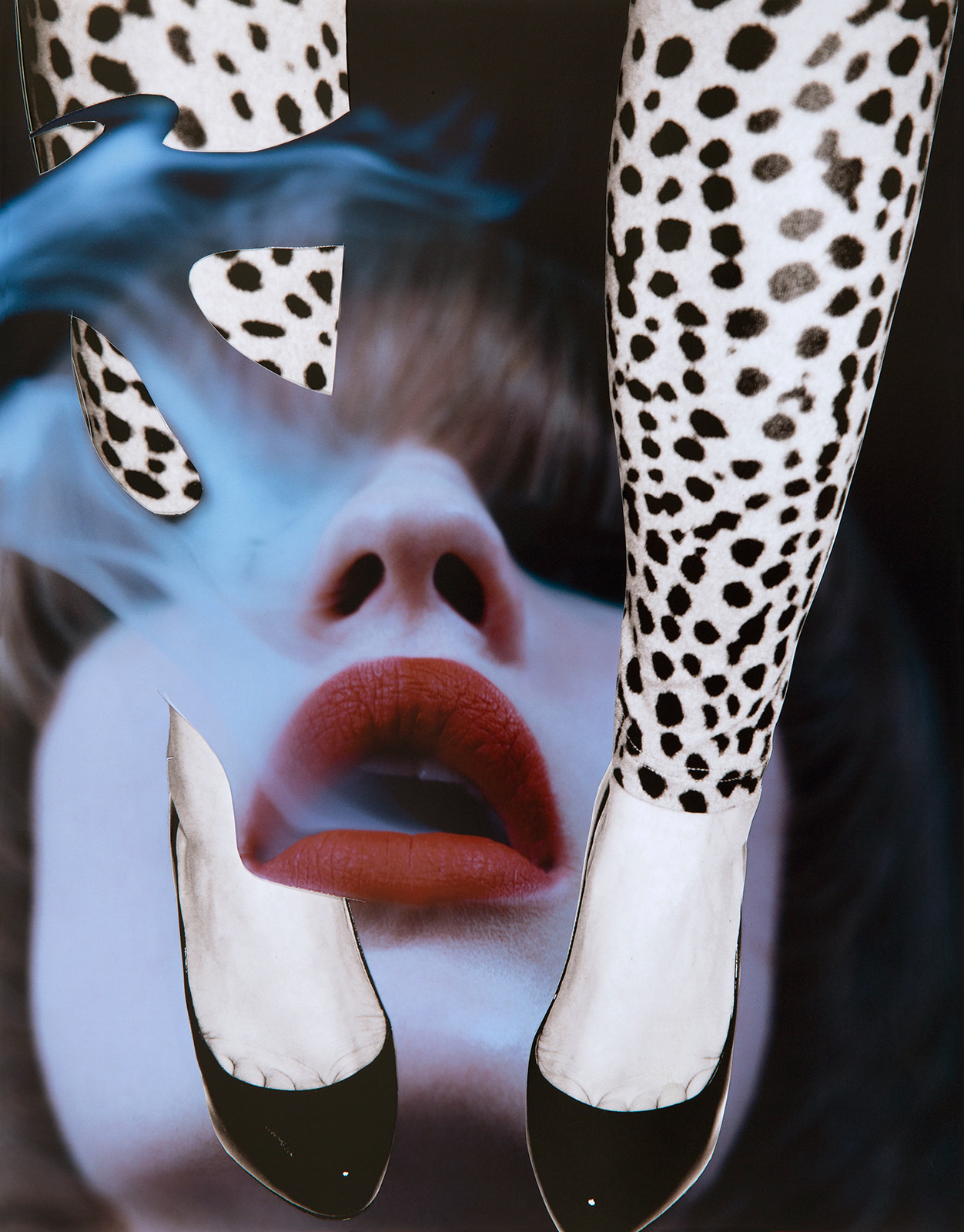 © Daria Birang, Smoke and Legs (25 years of Self Service)

CB: Another thing that stands out is that the collages are beautifully balanced, and the images carefully laid out. While maintaining their symbolic and political power, aesthetically they gain a different momentum. Would you care to describe your work process?

DB: Thank you! Sometimes I make it “more” of what it was, for example, by combining two crowds to make the crowd bigger (take Leonard Freed Crowd), and it can become rather alienating. Or, I put two pictures on top of each other, just by taking away a background, like with the Boys and Cops (photos by Leonard Freed). I wanted to show the ongoing struggle Black people have with police in the US. These pictures were taken during the Civil Rights movement in the 60s, but this is still a very relevant issue. By combining them, I forced them to interact with each other. It turned out to be one of my favorite collages, only because of its simplicity. 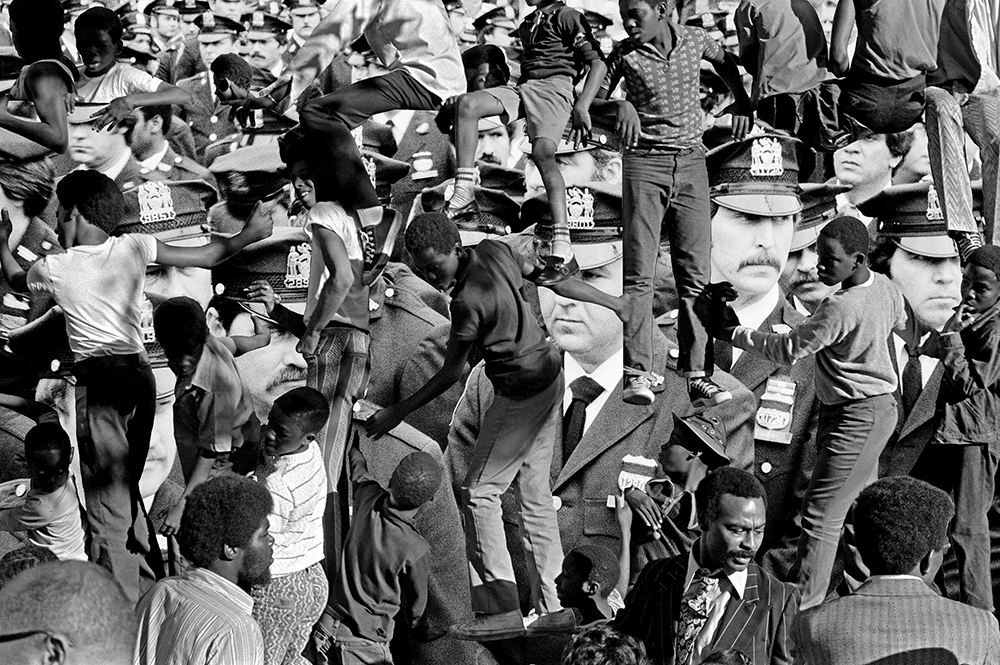 With some of the photojournalism images, I have tried to tell a story by using a lot of different pictures of similar situations, like with the rioters in Cairo. I couldn’t use that many for the book [Discordia, by Moises Saman] while I was editing it, but I wanted to show the many people involved and especially reveal their power and dignity. I tried to make it more into a theatrical performance, and the way we, as outsiders, would see them – fighting for their cause with so much grace. I wanted to illustrate that; the force and elegance in their struggle, and also in the power of many.

Like the collage of the crowd in Cairo. The parts where the people are cut out is empty space; there’s nothing behind it. I wanted to show that a crowd is gathering in a demonstration, and some of those dudes start to throw stones and molotov cocktails a little further down the street. Those are the ones I cut out; they left the scene of the demonstration, making almost the background. 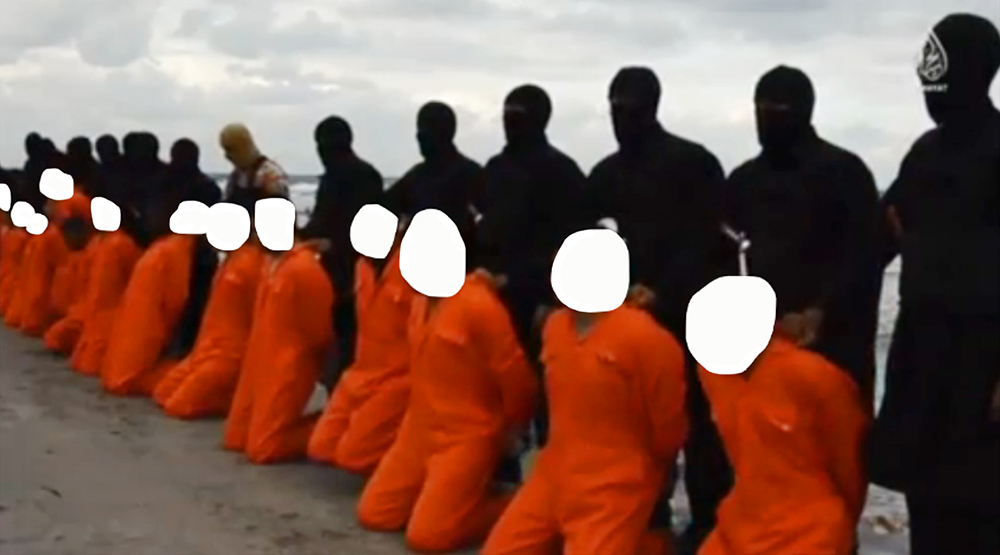 The heads of the prisoners in the ISIS collage are cut out as well. The cut out spaces where their heads were are empty, for obvious reasons. it’s not an easy collage. Sometimes it is difficult to be poetic in reality, but with collage you can tell a story in one image.

I once made big walls of torn off posters for an exhibition in Arles that had a lot to do with fragments of memory and life in general. At the time, my life was falling apart and all I had left were gathered fragments of myself. It might have been a desperate attempt to hold something together that was being ripped apart from the inside. I’m glad I wasn’t careful with those images [made in Congo by Paolo Pellegrin and Alex Majoli]. Both me and the walls made it through without falling apart. 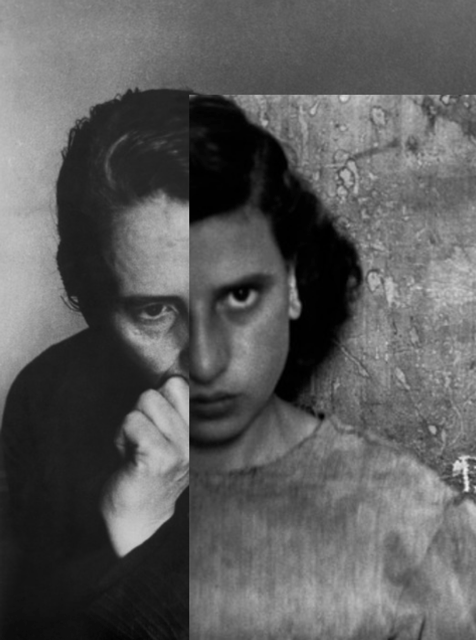 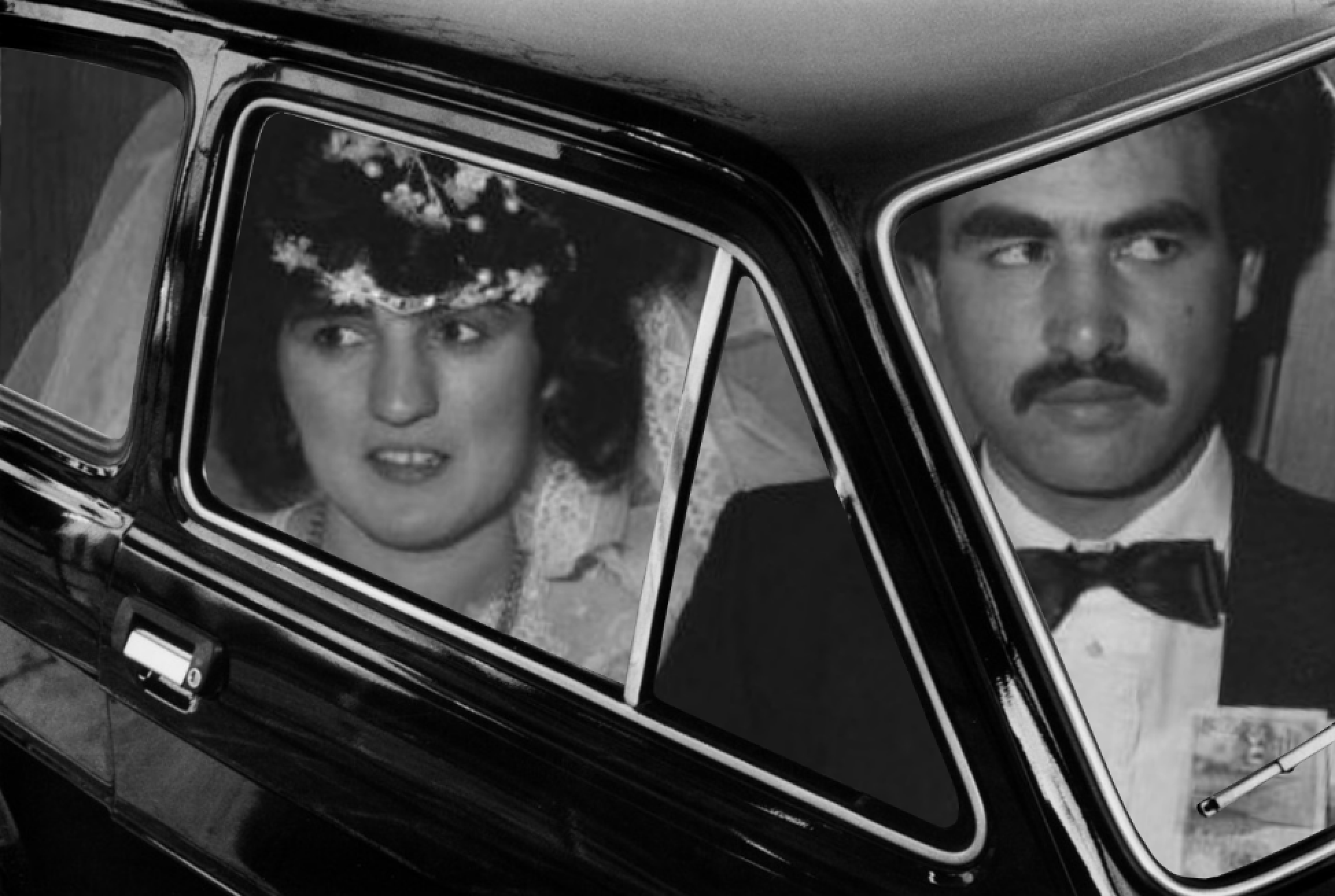 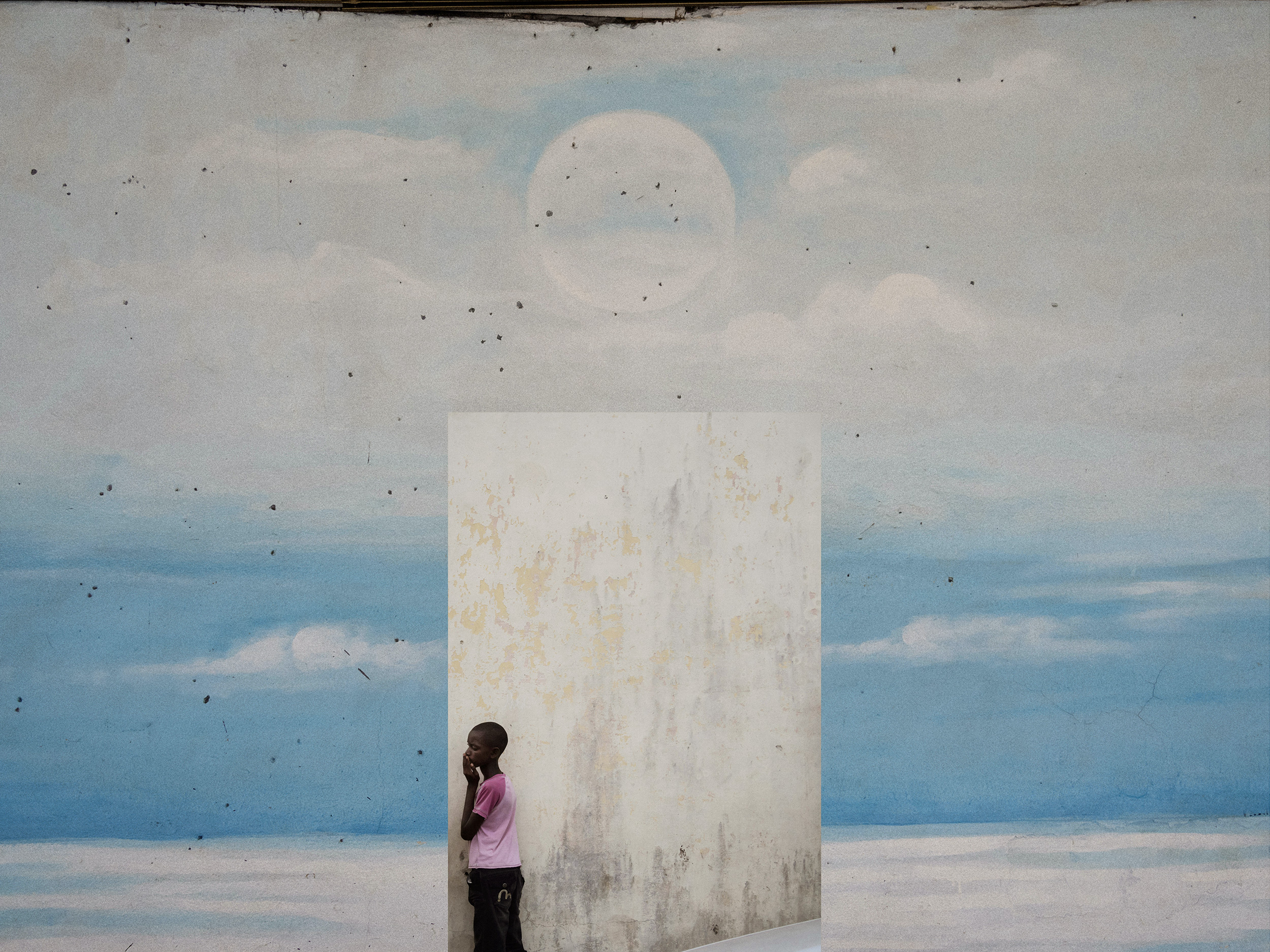 CB: Anything else on the way?

DB: Yes, some collages and editing projects (with a friend who I’ve worked with before), and more paintings I hope… 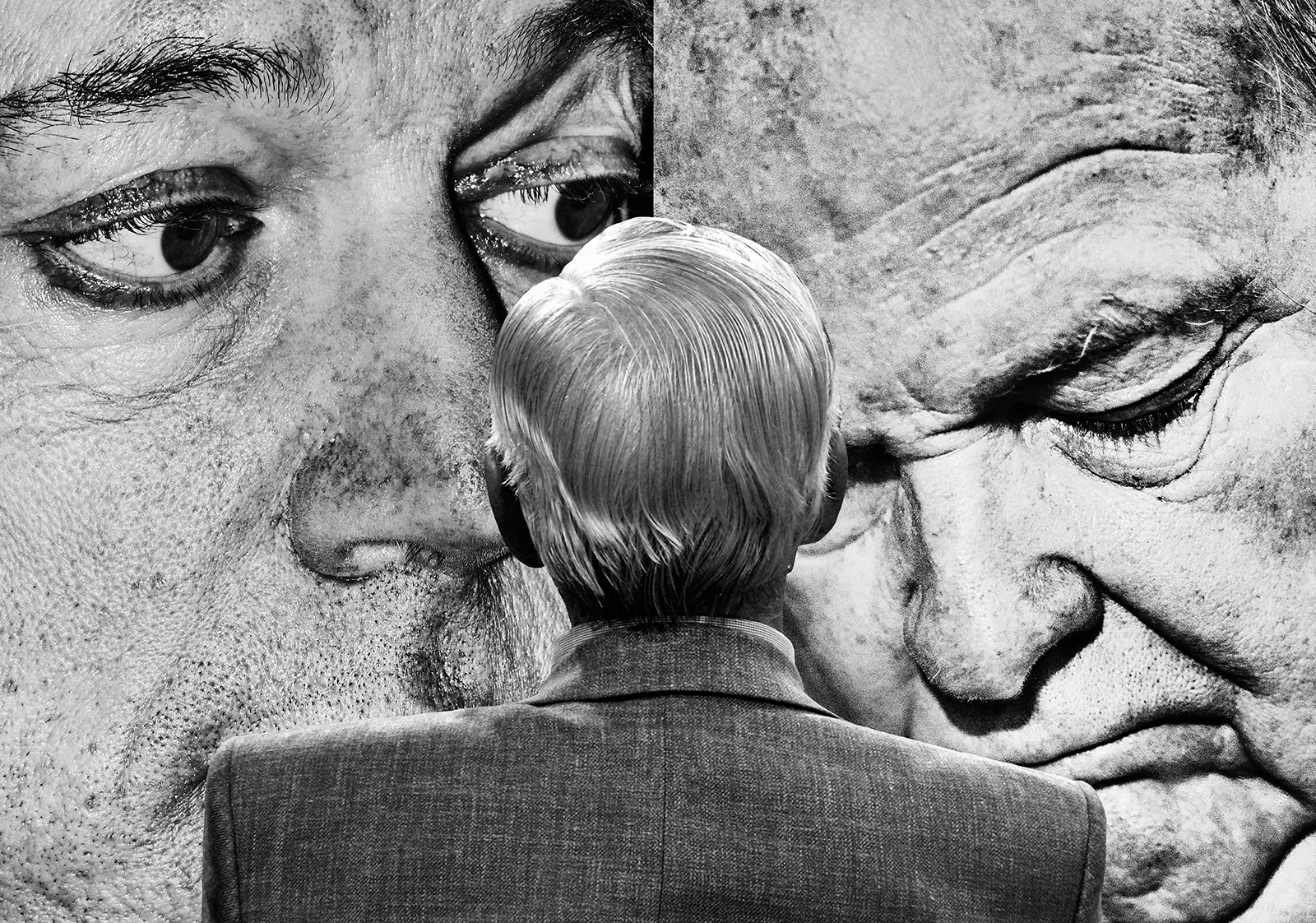 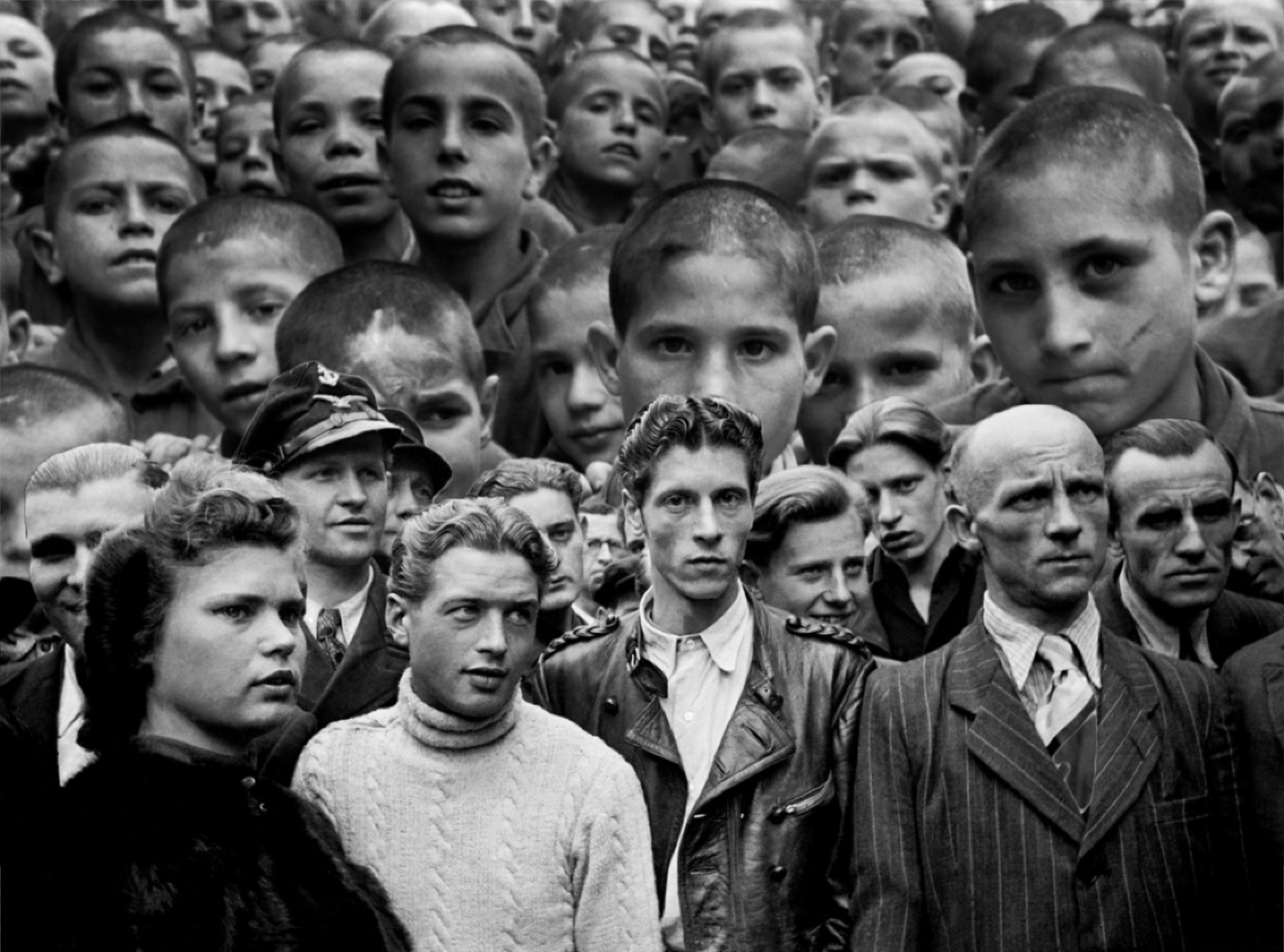 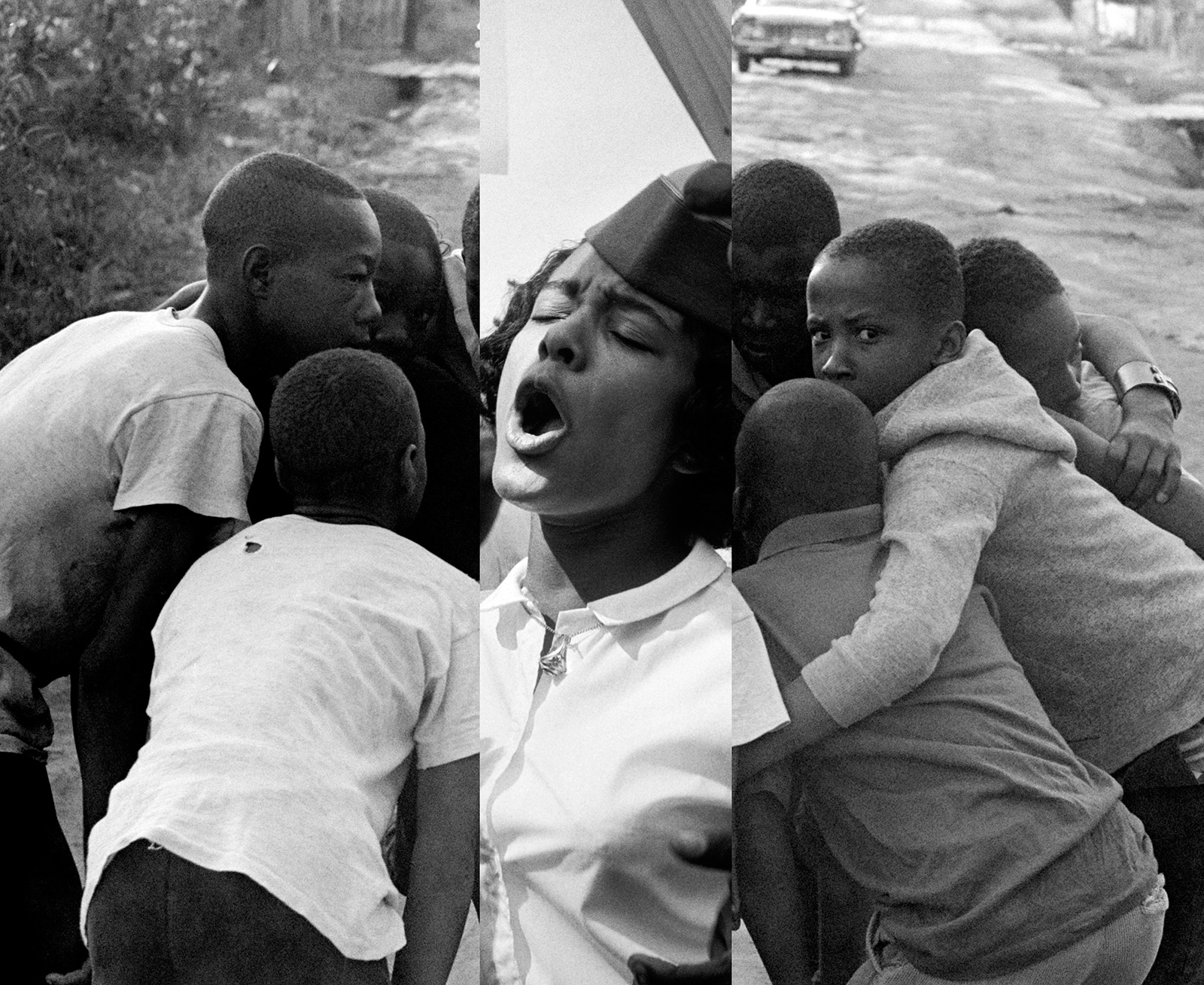 Daria Birang (b. 1972, Boston) lives and works in Sicily and New York City. Birang studied at the School of the Museum of fine Arts in Boston (US) and holds a BFA from the AKI Academy for Fine Arts in Enschede (The Netherlands). An artist of Dutch and Iranian origin, her work ranges from painting and collage to photobook-making, as well as curation and art direction.

Over the years, Birang has developed an obsession with photography, which grew into a practice of making books and exhibitions with some of the most recognized photographers working today. Her approach to editing and curating stems from her background in art, and is therefore sometimes regarded as rather untraditional.