Gloria Baker Feinstein: Can You See Me Now by Aline SmithsonMay 3, 2013 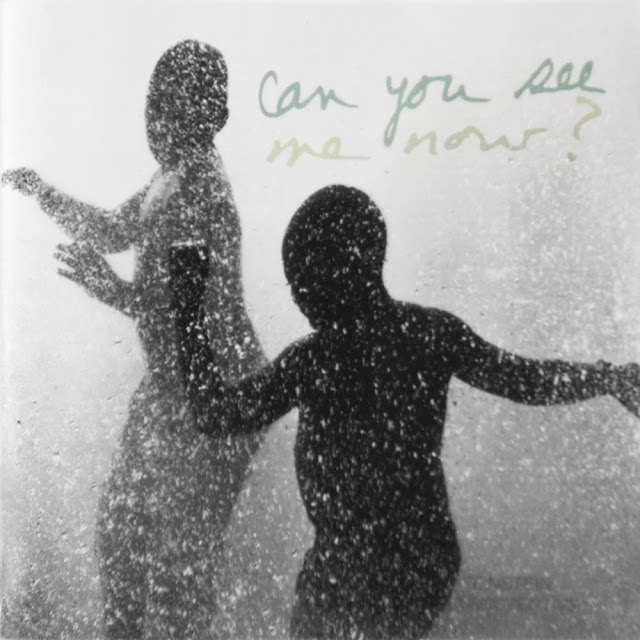 Not many photographers are given the honor of a mid-career retrospective, but Gloria Baker Feinstein is receiving that accomplishment with her exhibition, Can You See Me Now? on view at The Bohemian Gallery in Overland Park, Kansas from May 10 through June 14. The opening reception is Friday, May 10 from 6 – 9 PM. The exhibit includes photographs she captured as young as six or seven years old,  photographs from many projects undertaken since then and work made as recently as last month. 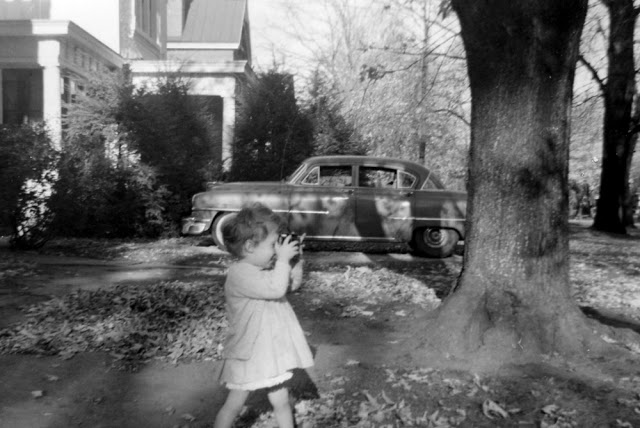 A 32-page full color catalogue featuring 50 images accompanies the exhibition. The introduction is written by Jane Aspinwall, Associate Curator of Photography at the Nelson-Atkins Museum. Her own writing runs throughout. The catalogue is available for a suggested donation of $10 (+ shipping), part of which will cover printing expenses and part of which will be donated to Change the Truth to assist the children living at St. Mary Kevin Orphanage in Uganda.

A long time friend, I am thrilled to celebrate her achievement on Lenscratch today.  I first met Gloria  at Review Santa Fe and a friendship was born.  Several years later, after an NGO workshop where she was exposed to St. Mary Kevin Orphanage in Uganda,  Gloria came home determined to “adopt” the orphanage and created the organization, Change the Truth, to support a community of children that did not have a lot of hope or opportunity. I am incredibly proud of her achievements as a humanitarian and as a photographer.

Gloria received her MA in Photography and Graphic Design from the University of Wisconsin. For the next decade she ran The Baker Gallery, Kansas City’s first gallery devoted solely to 20th century fine art photography. On her 40th birthday, she took her Hasselblad out of the drawer (where it had rested for 14 years), dusted it off and has not looked back. She has self-published three books: Convergence, Among the Ashes and Kutuuka. 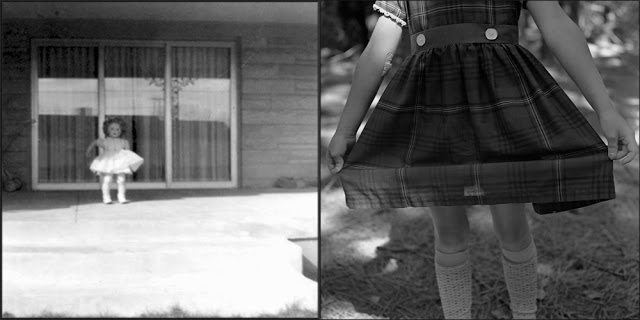 Congratulations on your mid-career retrospective.  Has this significant event given you pause for thought and reflection? 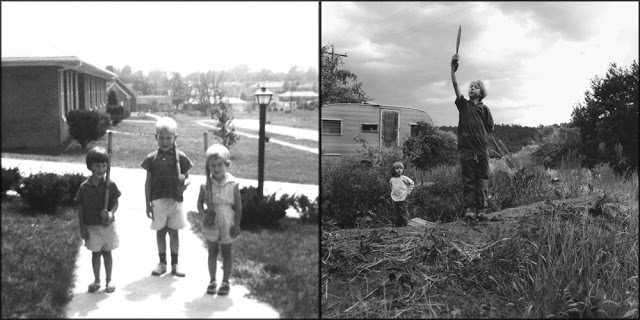 How does it feel to have your work so celebrated at this point in your career?  Are you imagining what the opening will be like?
It feels great! I couldn’t be more pleased. I’m thinking the opening will be a celebration of the support and encouragement I’ve received from the friends who represent the many stages of my life in Kansas City thus far: mom, photo dealer, volunteer, non-profit organizer and photographer. 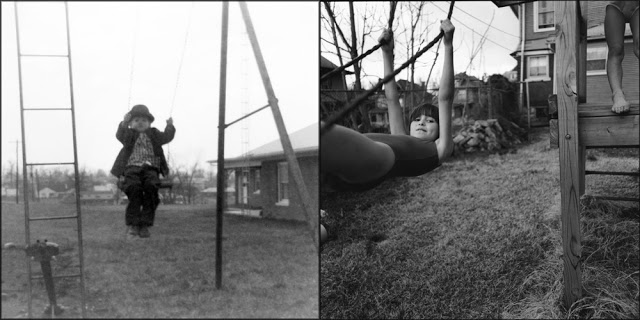 A quality that I have always admired photographically is your ability to explore a wide array of subjects, but still have a GBF style or point of view. Can you talk about that?
You’re nice to say that. I guess I don’t really think about it. I just do the work. I’d like to think that the pictures I make spring from my head and my heart and don’t have much to do with whatever camera or lens I happen to be using. Perhaps that is why – no matter the body of work – they look like they’re made by the same person. In the retrospective, I have paired pictures I made when I was five, six, eight, eleven years old with pictures I’ve made as an adult. Honestly, not much has changed! I think we must be born with a “way of seeing” that allows us to impose a visual structure on our world. Mine just keeps showing up in the work, no matter what I’m doing. I like that, actually. It makes the process feel safe and familiar. 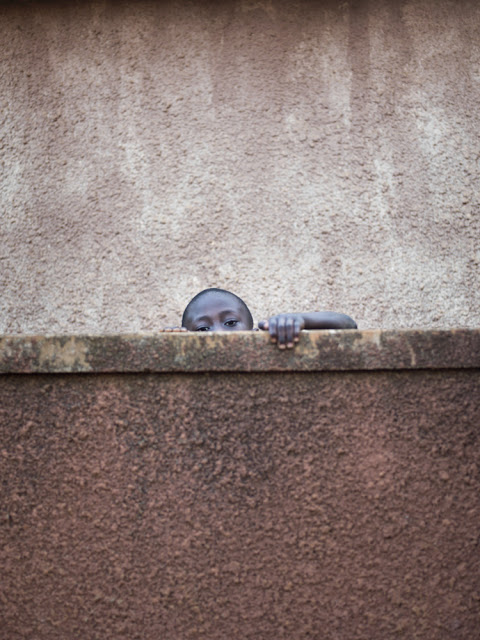 A quality that I admire about you personally is your heart and the ability to combine photography with changing lives.  Before creating Change the Truth, were you involved in other organizations or charities?
My parents were very civic minded and charitable; I simply grew up in that type of environment. I held my first fundraiser when I was eight or nine: a carnival in the backyard. My sister, the kids from next door and I raised $37 for the American Cancer Society. We made it an annual event for a few summers! I’ve done a lot of pro-bono photography work for organizations in Kansas City over the years. I’m lucky my parents made “giving” feel like any other part of “living.” 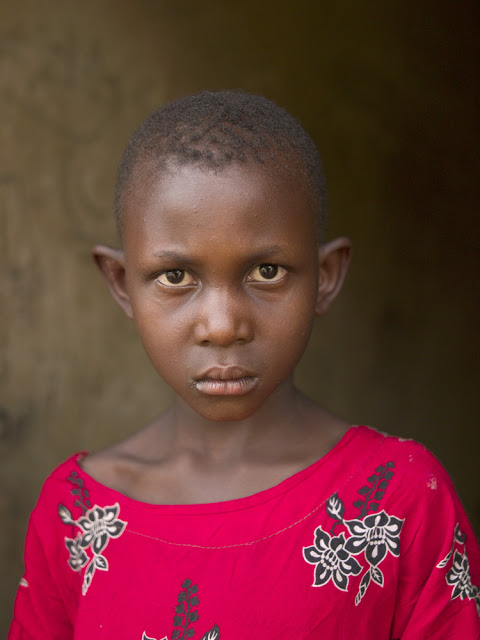 How has Change the Truth changed you, as a person and an image maker?
As a person, I need fewer “things” to make me happy. I’ve learned that happiness comes from a place that is filled with the love and support of friends and family. Manicured nails, make-up, an impressive house, collections of objects, a cool car and expensive clothes don’t make me the “mama” I am when I am with the kids in Uganda. I have had to dig deep to discover what it is that makes me that “mama” and I try to tap into those qualities every day. As a photographer, I am willing to take more chances, but I am also more interested in and more respectful of other peoples’ lives and stories. 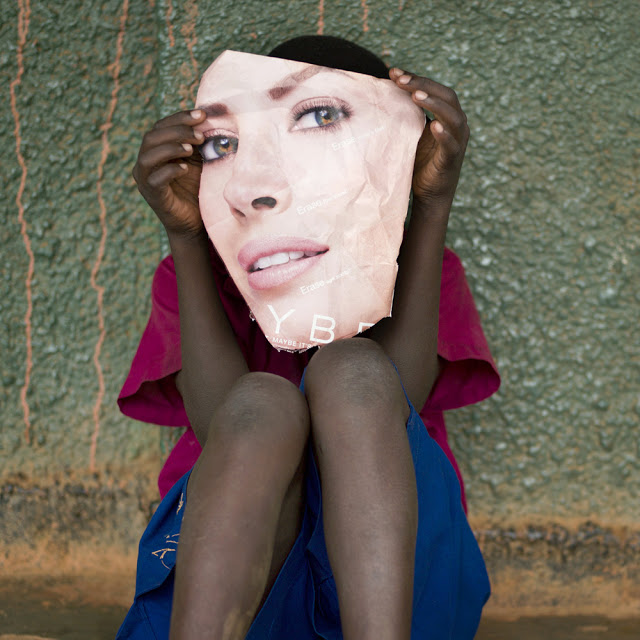 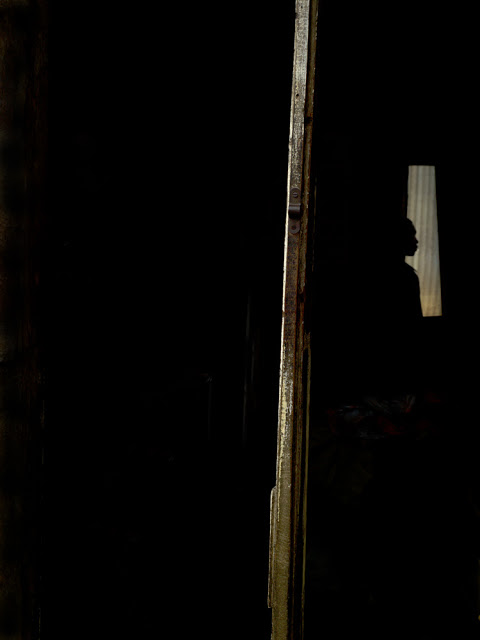 Any advice to emerging photographers?
Shoot everyday, don’t get tangled up in technology, open your heart and trust your own vision. Don’t stop singing, especially once you think you’ve found your voice. 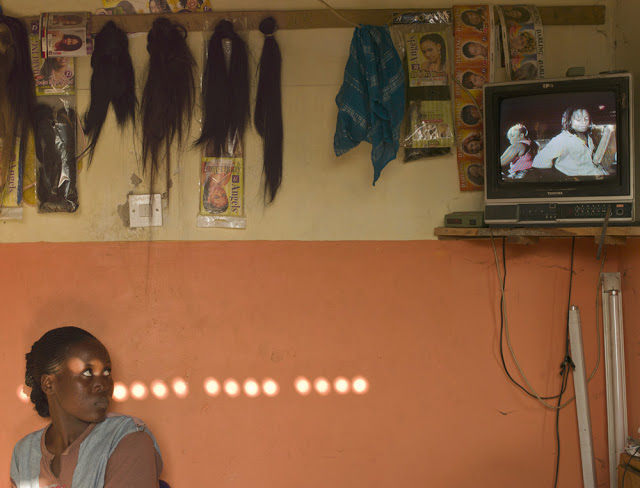 And finally, what would be your perfect day?
A morning hike with my sister through Forest Park in Portland, an afternoon playing with my grandchildren Henry and Clara, happy hour with girlfriends (margarita with sugar on the rim), cooking dinner at home with my husband and children, then watching “Girls” or “Madmen” or “Homeland” together. All the while there is music, and there are lots of pictures taken.
Revisited
I wanted to begin a new body of work specifically for this exhibition. It’s my mid-career after all! A time to celebrate. 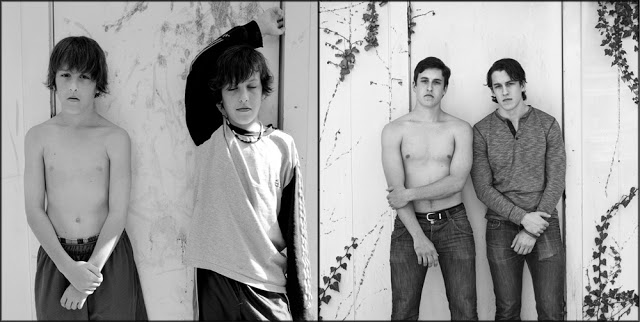 A few months ago I began contacting some of the twins I photographed back in 2004 and 2005. It was easy to find many of them; their phone numbers and addresses had remained the same. Not all, but most, were eager to be “revisited” and “re-photographed.” 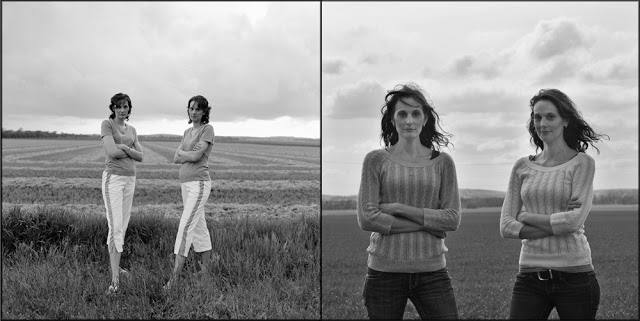 I think it’s safe to say we all have a fascination with the aging process – how our faces and bodies change over the years. That reason alone was sufficient for me to begin this process of updating the pictures from “The Space Between.” 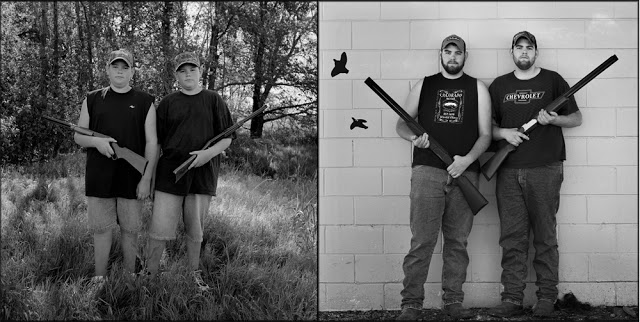 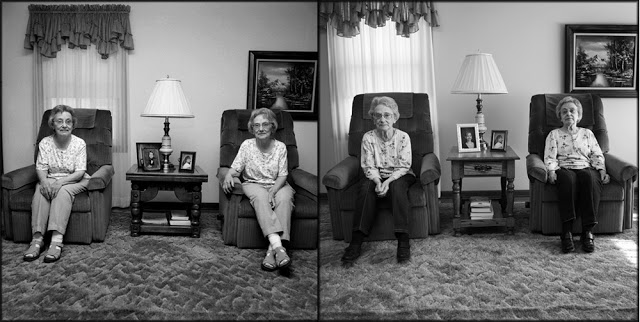 Portland
While in Portland, Oregon during the summer of 2012, I gave myself an assignment: shoot everyday. Even if I didn’t feel well or didn’t feel inspired or didn’t feel like working, even if it was rainy or muggy or hot, I forced myself to hit the street with my camera.
I loved this self-imposed discipline and continue to work this way each time I return to my second home, the “City of Roses.” 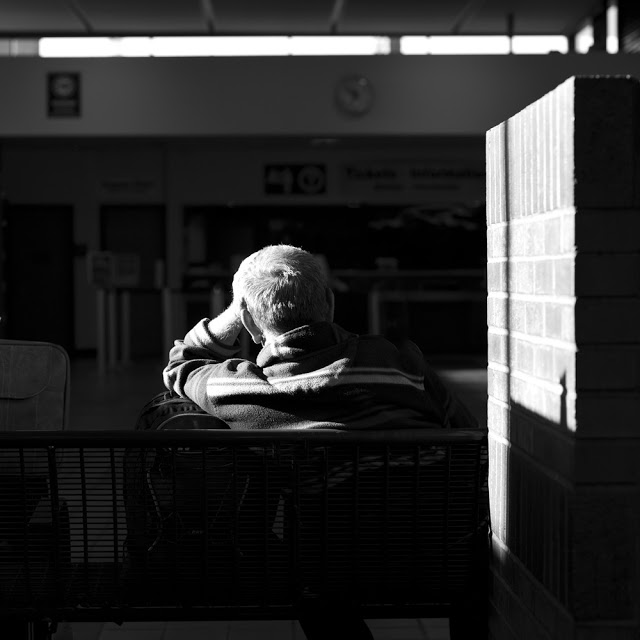 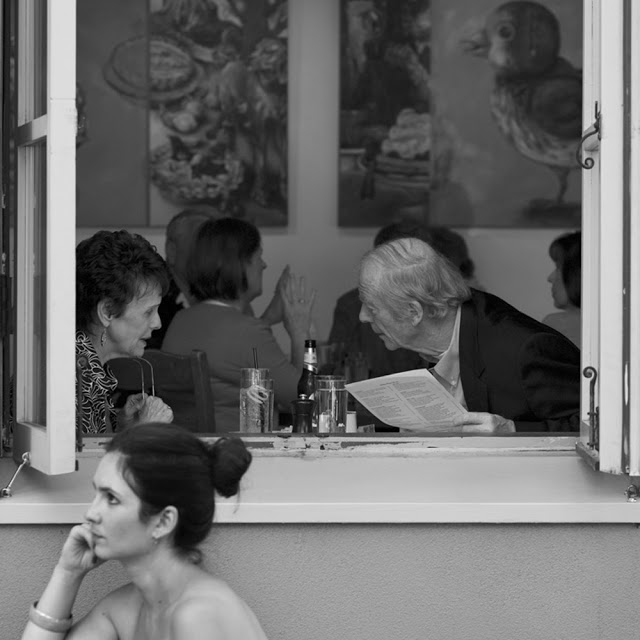 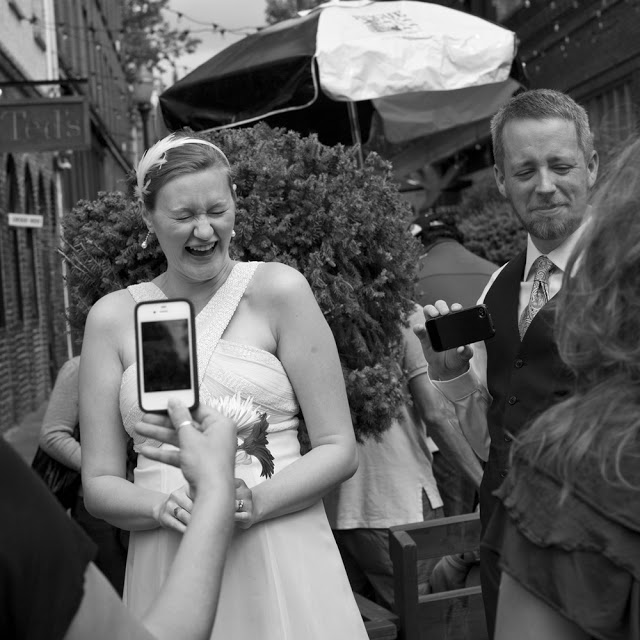 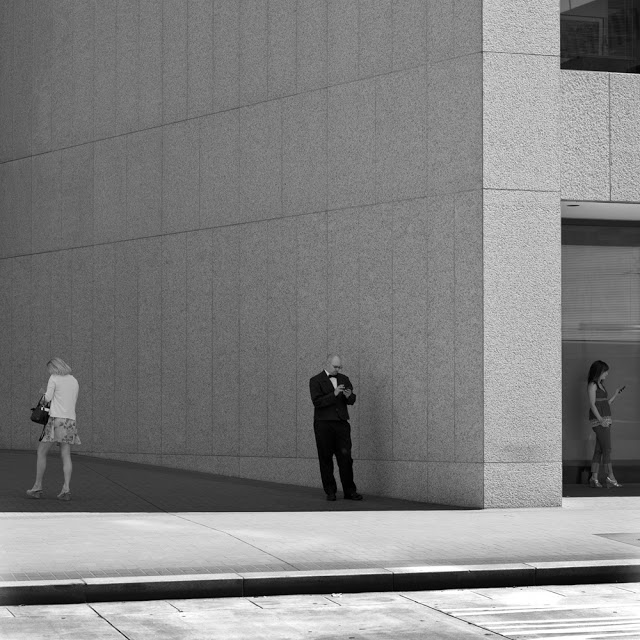 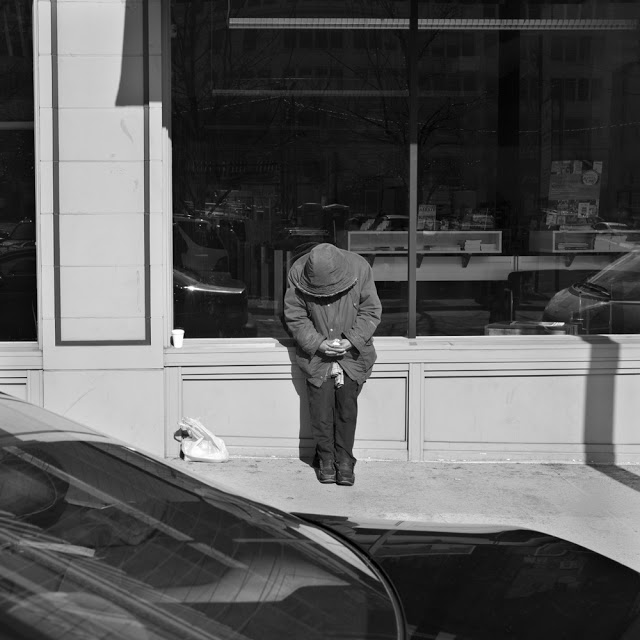