I guess one could call Simone Lueck lucky. Yes, she got a call out of the blue with an offer for a monograph of a project shot a decade ago, and in a year’s time has had two major solo exhibitions at The Paul Kopeikin Gallery in Los Angeles, and a solo show at the Musée de la Photographie, Charleroi, Belgium. But it’s not luck. It’s hard work, having a unique point of view, and an amazingly brilliant way of packaging her work. Needless to say, I’m a long time fan and also a friend, but that doesn’t alter my respect for her work and approach. Simone is, indeed, a success story.

Born in St. Paul, Minnesota, Simone lives and works in Los Angeles. She received her MFA from UC San Diego and is interested in in looking at an American cultural territory colored by notions of identity, performance and glamour. “I live in LA and I like it here. I like that the palm trees were all planted at the same time. I like that Gloria Swanson played herself in Sunset Boulevard. I like that she had it, and then she lost it, and she didn’t know the difference. I like that she buried her dead chimp in a satin lined casket. Making pictures in LA is good. It’s like sifting through an old trunk filled with worn out fan letters and a bright blonde lock of hair from 1953.”

Mark Batty Publisher has recently released CubaTV. “During broadcast hours, all TVs in Cuba are on, no matter if they are being watch or just serving as background noise. The actual television sets are outdated relics imported from America or Russia close to twenty years ago. Convulsing static pictures in off-color hues, the sets are jury-rigged with computer parts and other discarded technological talismans; they are adorned like religious altars.”

Simone has a solo show of this work on exhibition at the Paul Kopeikin Gallery in Los Angeles that opened July 16th and runs through August 27th. There is a special opening on August 6th, complete with a Cuban food truck and rum cocktails. 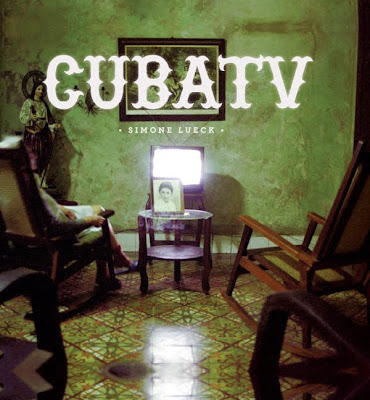 Congratulations on the wonderful book, Cuba TV, and the accompanying exhibition that just opened at The Paul Kopeikin Gallery in Los Angeles. How did the book come about?

I made these pictures in 2000. Since then they have been floating around online and featured in several blogs notably BoingBoing and other pop culture sites. Last year I got an email out of the blue from Mark Batty Publishers in New York. They had seen the Cuba TV pictures online and wanted to do a book. At first I thought it might be a scam, but it turned out to be all-good! 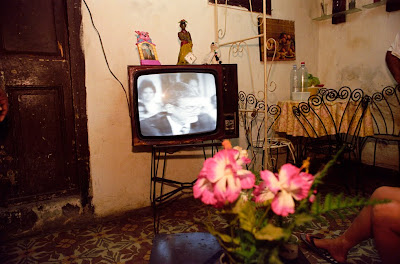 What took you to Cuba in the first place?

In 2000, my friend Erin Beach, also a photographer, invited me on a 2-week trip to Havana. She was going there for a photographic workshop, and I decided to tag along. Before visiting Cuba, all I knew was that people drove old American cars. I was ignorant about the culture and knew nothing going in. 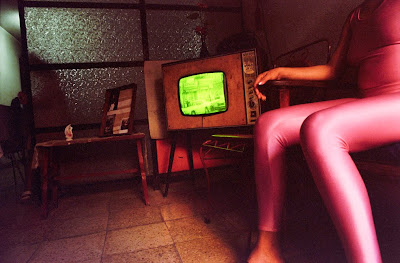 I like to use this project in my classes as an example of how a photographer can travel to a place that is unfamiliar but well documented, yet be able to quickly synthesize the visual landscape to bring back an insightful project that says more than just the average tourist photo. How did you go about this processes?

When I arrived in Havana, one of the first things I noticed was that the city was very dark at night. There were no streetlights, porch lights, or living room lamps. The streets were pitch black except for the glow spilling out of open doors everywhere, and it came from the TVs. The light was captivating and I wanted to see where it came from and what was inside. I spent the next 2 weeks walking around town, leaning into open doors asking if I could photograph the TVs. 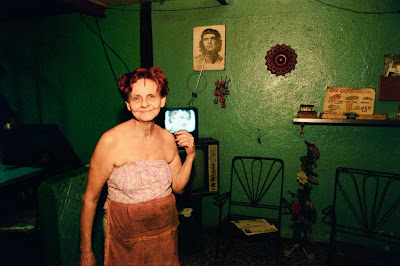 The work is a terrific statement about the transformative qualities of television. The images reflect poverty and a quality of life that is compromised, yet the television allows Cubans to be connected to the outside world. Was there any discussion about television as part of the culture?

There wasn’t a whole lot of discussion, as I don’t speak much Spanish. But TV is a cultural necessity in Cuba, as it is here. Each airing of a Telenovela is a sacred viewing party when friends and neighbors gather at the local house with the best TV… There are 4 main stations in Cuba, all state run. The stations broadcast news reports, baseball games, soap operas and Hollywood movies, mainly. The TVs are always on. There is certainly a contrast with the reality of the Cuban experience and the reality of life in Hollywood movies. There is an awareness of the consumer culture that doesn’t exist in Cuba. In this way watching TV can provide a fantasy and escape, as Hollywood movies do here, too. 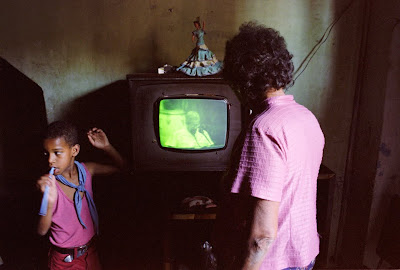 What approach did you use to shooting inside people’s home?

As a blond girl from the United States, I think that people were as curious about me as I was about them. Each time I came across an open door and a working TV set I would peek my head inside, say hello and ask to take a picture. 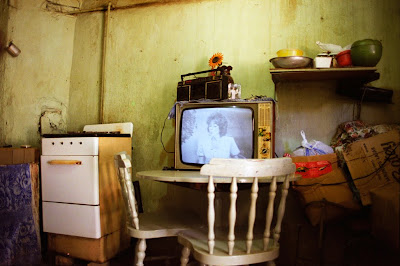 Do you have a desire to return to Cuba, and what countries currently intrigue you?

If there were a reason to return to Cuba, another project or exhibition for example I would love to go. I would love to go just about anywhere, if there is a reason. I am curious about many places. The top of the list right now is Portugal, though I’m not sure why. 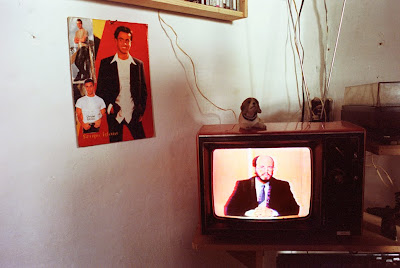 What readers aren’t seeing is the ingenious way that you first presented this work. You had a custom cigar box built as your portfolio box–plus I’ve seen the fantastic way you find to present your other projects too–can you share your thoughts on your creative presentations?

Making the photographs is usually just the beginning. After, I like to develop the work more. There are often additional narratives and experiences beyond the pictures, and if I can convey this in a final product, then that’s fun. 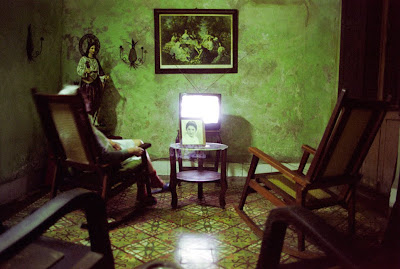 Did you use a Mamiya 7 for this work? Are you still using film?

In Cuba, I used my first camera, a manual 35 mm Minolta that used to be my dad’s. I still shoot film, only now I use Mamiya 7. I love the saturated colors the film produces. Sometimes it’s like looking at an old Technicolor movie. 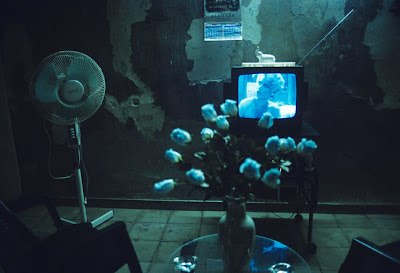 For emerging photographers, the first step is to create a strong and cohesive body of work that the photographer is really excited about. Next, I would make a beautiful set of prints and take it to a good portfolio review. This is a great way to get feedback and to get the work noticed. 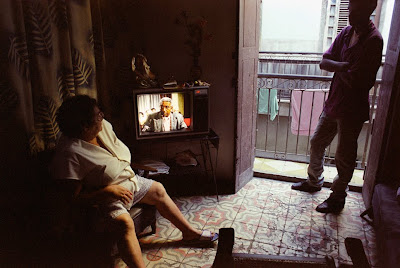 After I completed The Once and Future Queens, I spent a lot of time and effort marketing the work. I submitted to all the photo blogs and did a couple of portfolio reviews. As a result of submitting to Critical Mass at Photolucida, I was approached by Kopeikin Gallery where I showed the work last year. It was my first solo show, and it was a great opportunity. 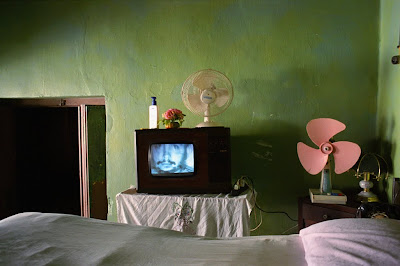 I’m on Facebook, but I am not as interested in social networking as I probably should be! 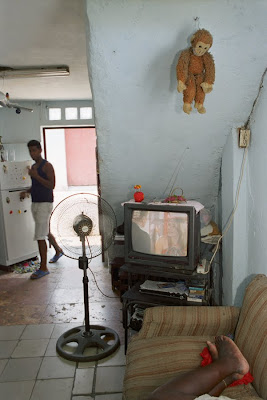 Do you ever have periods of self doubt and feel creatively unmotivated?

I have a lot of self-doubt, but I do not struggle with creative motivation issues. There is always something creative to do. 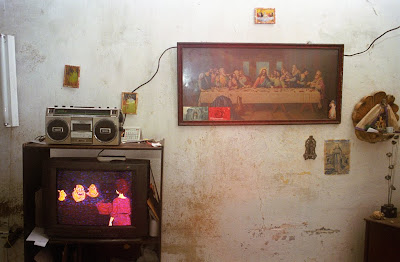 On a perfect day I would play tennis in the morning before it gets too hot. And for lunch, Langers in MacArthur Park. I would also work and read a bit… Sunset cocktails and then a movie. That sounds nice!