The One That Got Away by Aline SmithsonOctober 30, 2011

A few months ago, I started thinking about imagery that I didn’t capture, and recalled a Martha Stewart quote where she stated that she had a better memory of the items she didn’t buy at yard sales and flea markets, than the items she did buy. I put a call out to photographers to share their stories about a moment or an image where they regretted not having a camera available (or in working order) and I got a number of responses that I am sharing here. But Blake Andrews also gave me a heads up about a photographer who uses his eyes and memory as a camera….

Michael David Murphy has created Unphotographable, a site that uses text accounts of pictures missed, complete with podcasts.“Unphotographable is a catalog of exceptional mistakes. Photos never taken that weren’t meant to be forgotten. Opportunities missed. Simple failures. Occasions when I wished I’d taken the picture, or not forgotten the camera, or had been brave enough to click the shutter.” David is a writer and photographer who has many worthwhile projects to explore, that include actual images!

When asked why he does this, he answers:
I‘m a photographer and writer, but I’m not the kind of photographer who prefers looking at life through a lens. If we take photographs to remember, what do we do when we’re not taking photographs?

Unphotographable was installed as part of “Command Z” at the Torrance Art Museum and the installation consisted of a grid of nine framed “unphotographs” with a corresponding laminated gallery guide. The guide supplied the text for the nine framed pieces on the wall. Pretty brilliant, I’d say! 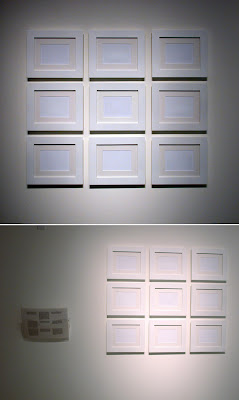 Here are some of your “unphotographable” responses submitted to LENSCRATCH:

From Bridget Burke
My husband and I were visiting his family at a camping site last summer. I hadn’t met the people that my in-laws usually camped with but one of the couples had these great teenage sons that I was following around with my camera. They were a little shy, so when I finally cornered one, I was so psyched because I knew it was a Moment. Unfortunately, I was shooting with my (new-ish) rangefinder, and didn’t take my lens cap off. I shot about 5 rolls of 120 that day and I was only looking forward to seeing that one shot. When I saw the negative was blank, I was devastated. I still think about it all the time. I think I’m going to recreate the event in my own self-portraits, but it will never be the same. In my mind, that photo is epic. Even if it doesn’t exist.

From Jerry Downs
In 1977 I was in New York City during a Black Out. I was watching the Broadway Musical, The Wiz. Just as the Lion was about to get courage the lights went out. I went to Times Square and when I looked up I could actually see the stars. It reminded me of being at the bottom of the Grand Canyon and being amazed by how bright the night sky was above the pitch black canyon walls. I considered doing a ten minute exposure of the scene, but with all the excitement going on, I let the idea go in a New York minute. Remembering this event has often prompted me to stop and take the time to take a picture.

From Jordanna Kalman
A few weeks ago I was out walking with my daughter in the early morning (the best time of day in my opinion) and there on a lawn was a deer munching on some flowers. I cursed myself for not having my camera (I know, it’s a deer, gimmie a break– but oh! the glistening dew on the grass, the streams of sunlight through the trees and the yellow flowers being eaten— it was such an ethereal moment). Anyhow since that morning I’ve lugged my huge camera along with us on our walks and this morning there it was! Finally a deer! Dewy grass! Yellow flowers! And you know what, I just watched him. And then awhile later, on another lawn was another deer– and I didn’t even think to touch my camera.
I think those magical moments that get away from us end up becoming part of other pictures we do capture. And my dewy grass deer fantasy photograph is most certainly better than the one I would have taken.

From Jeff Kopito
I’m out on Long Island – which was right smack in the headlights of Hurricane Irene. Winds like out of control freight trains and pouring rain that seeped into every weakness my house and basement had.

But the skies did eventually clear and luckily enough, my town was littered only by branches and spent leaves. Couple of big oaks came down but not the destructive devastation predicted. Still scary enough during the storm that I wondered if I shouldn’t have packed up and gotten the hell out of Dodge when I had the chance.

So the sun is out this morning, and I’m driving to my office for a Monday back at work. I look up at an overhead set of wires above the local highway and I see silhouettes of a dozen birds sitting there against the clear blue background of the sky.

Had a bit of a laugh – their absolute calm the day after the storm of the century. Just sitting there.

All I could think was “…and where the heck were you guys yesterday?”

Contrast. It’s all about contrast.

From Laura Burlton
There are so many times I think of the photos that got away. I have these memories of this park that I loved when I was a young adult. It was on Bolivar Peninsula, off of Galveston Island. We used to go to the island when I was a kid. When we had first moved to the area, I remember my parents taking me on the ferry to Bolivar. You could ride in your car or walk on. In any case, I used to love to go out on the upper decks and look at the water as we passed from Galveston to the Peninsula. My friends grandmother had a beach cabin there we would go to when we were kids and there were these structures I would see on the way there. Strange concrete bunkers with grass grown over the top. Very wild and abandoned. You used to be able to get inside some them as well. They reminded me of castle ruins or something. This was the old Fort Travis and it had been made a park at some point. There were cabins and a play area, but it all looked abandoned and disheveled. But the park I loved. There was this swingset that went in circles ( it was two swings) and a clown on top. There was also a merry go round, or one of those flat things that you would spin as fast as you could and hold on to dear life so you did not fall off. I liked to spin on it and lie down staring up at the sky and clouds moving as I spun. I am fortunate that I have never been prone to motion sickness.

Sadly I never took many photos there. I remember taking a few around the bunkers, but not what I imagine I would take now. I wish I had discovered toy cameras at that point.

The bunkers are still there, but they are gated off and very difficult to access and the old park has been taken down and replaced by a shiny new one. It does not inspire me in quite the same way.

In any case, here is a blog post of the ferry to Bolivar and some of the bunkers and ground. I did not take any of the new park, because I probably resent it being there

From Marietta Van Buhler
In thinking about your question about “The one that got away”… at first I thought, “Nope, doesn’t apply to me”, primarily because I see myself as a mood photographer; often taking ridiculous amounts of shots of the simplest things… the biggest thing I might miss out on is if the light improves momentarily due to a cloud moving along. I vowed not to be the type of photographer that lives in the memory of my youth; grandfathers and fathers getting belligerent when someone’s smile would begin to quiver after what must have been 20 years in kid time.

But then I recalled back about 7 years as to how I even got into the obsessive world of fine art photography; it was a view of the most perfectly moss and lichen covered roof on a barn that I happened upon shortly after making a move out to the country. I would drive by day after day observing the changing tones of celadon and turquoise (as illuminated by the available daylight), in the fuzzy pointed triangular pattern of the old style roof shingles. In the areas where the crumbling shingles had lost all structure it looked like a charcoal sketch artist had painstakingly shadowed every shingle giving the appearance of a finely detailed etching of the most intriguing fish scales I’d ever seen. The problem was that I only had a small digital camera that I knew would not get me close enough to the area I wanted. This strikingly aged barn roof and my quest to capture and preserve it drove me to purchase my first DSL camera after months of research, questioning friends and re-arranging my food budget a bit. I headed out early on a foggy fall morning with my new camera (not really having any clue how to use it), rolling slowly over the turbulent and pitted dirt road, barely creeping along as I neared the barn around the bend. To my complete surprise and crushing disbelief, the roof had been replaced with a new crisp vertically seamed metal roof, the undulating rafters no longer in view through the sagging shingled sheath. How could they? Years in the making – a perfect image – gone! This was to be the first of many experiences I would have as to how differently I viewed this adopted region of mine; I could only imagine the pride the farmer must have taken in finally getting that old roof replaced.

From Aline Smithson
Way back in history, when you could bring all sorts of things into stadiums and concert halls, airports and government buildings, I managed to bring a large gold pointy hat from Thailand into Dodger Stadium. I thought that a shot of my daughter, sitting in the stands juxtaposed against all the Big Gulp and hot dog holding populace, would make a quirky and fun photograph. My daughter wasn’t finding it fun at all, because as we all know, not everyone understands the world of fine art photographers, and she was at an age where drawing attention to oneself is not a good thing. But I offered up a dollar and she gave me ten minutes. I raced down the stairs of our nose bleed seats with my new Holga in hand and snapped away, feeling very smug that I had pulled this off. Right as my 10 minutes were up, a spectator tugged on my sleeve to point out that my lens cap was still on….and by that point, the gold hat was off and wasn’t coming back. Trust me, it was a really good photograph and I remember it clearly, but I don’t remember anything else about that afternoon, including what team the Dodgers were losing to.