Do Photographs Age? by Aline SmithsonJanuary 6, 2013 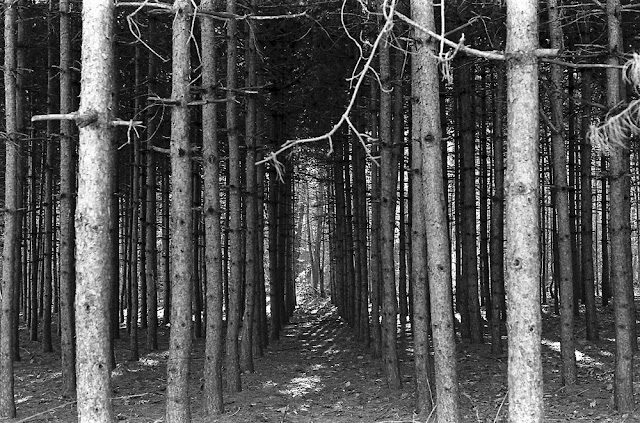 ©Jason Landry
The Pines, Greenland, NH, 1990
Is old work valid: YES.
Does it look and feel like a contemporary photograph: NO.
Should
you be submitting it to portfolio review events: probably not, unless
you are using it to just show a comparison to what you used to do, vs.
what you are working on right now.
Let’s look at one case study: Neal Rantoul
Three
years ago when I took over Panopticon Gallery, the first artists that
came in to reintroduce himself to me was Neal Rantoul.  Neal has been a
working photographer for close to 40 years.  I knew Neal while we were
on the board of directors at the Photographic Resource Center at Boston
University, but only knew him for his newer color, digital work which
was aerial wheat fields from Pullman, Washington.  Neal would come into
the gallery every week with a few different portfolios for me to look
at.  I was amazed––this never stopped––it went on for a few months!
This guy has such a backlog of projects or series that most people had
never seen. I honestly believe that he has more finished and realized
projects/series than any photographer on the planet, period!
I
had suggested that we do a show of all old work.  He was against the
idea at first, but my thought was, Neal, I worked in the business world
and I understand marketing and branding.  If this old work has never
been seen, I want to show it first so that our audience sees a larger
breadth of what you have done and then later on we can do a more
contemporary show and bring them up to speed. He agreed and then I
hosted the exhibition Neal Rantoul: Twenty-Five Years (1980-2005).  This show included his larger format 8×10 work and his Hasselblad super wide images that appear in his monograph Neal Rantoul: American Series. It was well received by the press and by collectors.
Sometimes
artists fail to get a gallery to represent them early on in their
careers, or the gallery that they do get isn’t the right fit and doesn’t
promote them as much as they should.  Once the right gallery owner
comes along to represent them, they have to throw it into overdrive and
work much harder to bring their artist up to where they should be in
their careers. So in the case of Neal Rantoul, I believe he is one of
the most under-appreciated American photographers that we have, and I’m
lucky to know him.
I
don’t mind putting older work in an exhibition along side newer work.
For me, it depends upon theme.  If I am doing a group exhibition, and
it fits in nicely, why not show it?  Our next exhibition On First
Contact will be a group show of contact prints and oversized contact
sheets.  We have older work from the 80’s and 90’s along side work made
last month.

Gordon StettiniusI am thinking that most photographic work does appreciate with time.
Last week, I received a little over $120 dollars via Paypal.  I had
never had a positive balance in my Paypal account before and cannot
remember why I even created it now.  So, not knowing what else to do
with that money, I was off to Ebay!   And I spent my new found digital
wealth on old photographs.  I tried to spend it all on a Charles
Gatewood 8″x10″ print of William S. Burroughs but that went for well
over $200 and my last second poaching was backed only by a $125 bid.
Chastened, I reeled myself back in and went for unknown artists,
vernacular work.  I bought an 8″x10″ of a botanist with his plantings, a
“Boy with Rolling Hoop” cabinet card, an “unidentified woman sitting on
car bumper- 1924″, a “50’s apartment homespun pin-up, partially nude”,
and finally, I bought a “lot” of thirty-three vintage images because two
or three of them caught my eye.   I love old work.  Obviously, I also
respect known artists and I have dedicated much of my time to see that
certain photographers get more recognition.  BUT I do believe that
almost any work that lasts, that was/is appreciated enough to be kept
intact, will simply get better with time.  It may be a romantic delusion
but I feel the average snapshot of today will somehow manage to make us
cry when we are creaky with age and juggling gauzy memories.  That
simple capable shot, has to have had something to it…  a note taken
about geography, culture, history of textiles, race, gender, fashion,
architecture, signage, industry… something that will always hook
someone comparatively once that moment is gone and thirty years have
slipped by.  The present will always compare curiously with the past.If an original contemporary photograph is a novel and expansively
articulated idea, then it will always splash down into our midst like a
brilliant and hopped up wolverine into a suburban mall food court.  And
that screeching varmint of an idea will command attention, it will
disrupt the natural order of things, it will fill out its speedo and
speak three languages and dabble in kimchi fermentation…  And then
with a little more time, this spectacular incendiary photoklast will
shed a little of its dynamic appeal, settle in to its new routine, maybe
start dating the cashier over at Sbarro.  But sadly, most ideas and
images do not receive the aesthetic stigmata that the artworld
gatekeepers will etch upon certain ‘chosen’ work.  Most work, most
photography, falls into the ‘capable and dedicated’ realm.  We keep
making it, even if it isn’t brilliant at every turn.  And the fresh
bloody art newness of our recent work will always require our
unconditional love.  We keep moving (hopefully) though and the next
project unseats the last one and so it goes even as our culturally
broadcast highlights are few and far between.  Even as the creators
cannot be much trusted to see clearly right away, neither can those with
the formally weighted opinions be completely believed.  What
distinguishes the good work from the celebrated work often has as much
to do with synergy and being in the right time and place as it does
anything else.  Sometimes a generous temporal distance between creation
and recognition is enough to rouse interest in something, some curious
aspect, that missed catching the wave of adulation back in the day.Since becoming a gallerist, I have been trying to peel back the veil on
the contemporary art market and to understand the vagaries of art as
business, promotion and collectibility and the role that narrative plays
in the trajectory of artwork.  I have been trying to learn these
inscrutable artworld mechanics because my role now is to advocate for
certain artists in an attempt to help them gain exposure and income, so
that they might carry on.  My goal is pretty simple but the means by
which I get there is part polish and part pyrotechnics and part
hard-earned experience.  I find that when I ‘believe’ in something then
the whole process of advocating for that work feels okay to me.  It
feels pretty good to me actually.  I wish I could do more for more
people.  But we do what we can do, and this gallery and others like it,
we are all part of a hive mind tending to our visual heritage like so
many frogs in so many wells.   We place a lot of value on work today and
because we do, because we cherish ideas and expressions, we hope, in
turn, that our own ideas and artwork will continue to be honored.  A
psychologist might suggest we are busy projecting value upon the past so
that our present, soon past, will hopefully have a like value one
day…  Maybe… But I do love older work for reasons above and beyond
the original intent of the original maker.  I love the nature of time
and fragility layered over the unique significance of the artists craft.