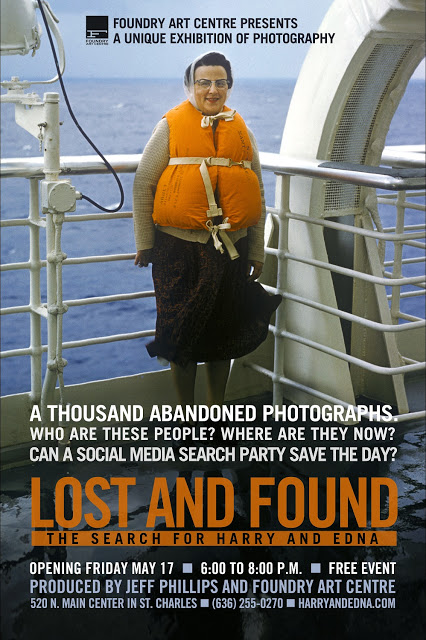 My Chicago friend, Jeff Phillips, happened upon a set of 1,000 slides in a secondhand store–a discovery that set him not only on a journey into someone else’s life, but connected him with strangers and got him thinking about the importance of physical photographs and what they mean as a legacy to others. His discovery has also resulted in an exhibition, Lost and Found, The Search for Harry and Edna, opening at the Foundry Art Centre in St. Charles, Missouri from May 17th–June 21, 2013.
With slides in hand, Jeff’s curiosity was peaked and he began a Facebook search for the owner of the slides (https://www.facebook.com/IsThisYourMother?),  then a website dedicated to Harry’s photography, Harry and Edna.  Jeff describes his journey below, but first a little about Jeff and the work that HE produces.
Jeff has been passionate about photography for more than 30 years and is a proud member of the Filter Photo Festival team in Chicago. He also belongs to the Chicago Photography Collective, a diverse group of 15 established photographers who produce exhibitions and events around the city of Chicago.
His photographic training has been a mix of informal and professional: He has worked as a darkroom technician, studio assistant and as a photographer for several commercial studios and served advertising and corporate clients for over a decade. In recent years he has begun concentrating on his own personal work.His photographs have been exhibited nationally and published internationally through a variety of media channels including books, newspapers, and magazines. His current work is directed towards an ongoing series entitled Crowdspotting. Jeff photographs groups of people where they gather in public spaces, capturing the humor, beauty, and randomness of the crowd. Using an obscure, film-based, wide-format camera with a field of view approximately the same as human vision, he prints his photographs about six feet wide.
images from Crowdspotting

The rest of this post is Jeff’s description of this journey with Edna and Harry….
LOST AND FOUND 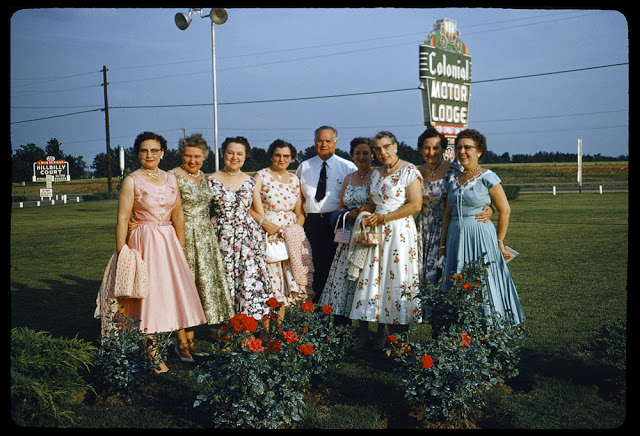 Lost and Found is a body of photographs and text.  It tells the story of a social media search party attempting to discover the identities of an anonymous couple who traveled the world more than 50 years ago.
While shopping at a consignment antique store,  I found more than a thousand unmarked Kodachrome slides of an unknown man and woman.  What I saw was astounding: a portrait of a woman wearing a bright pink gown, positioned in the center of the frame, and standing in front of a field of thick green trees. The following slides were similar, with the woman was wearing a yellow dress, and then a blue dress.  The next slide made me laugh out loud, right in the store:  She was again standing mid-frame, on the deck of a ship, wearing a bright orange life vest. 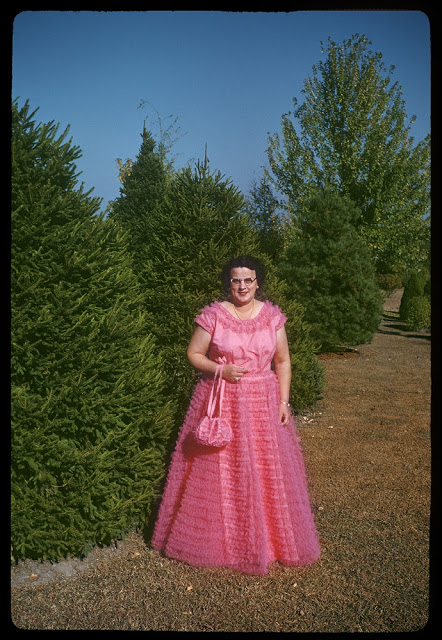 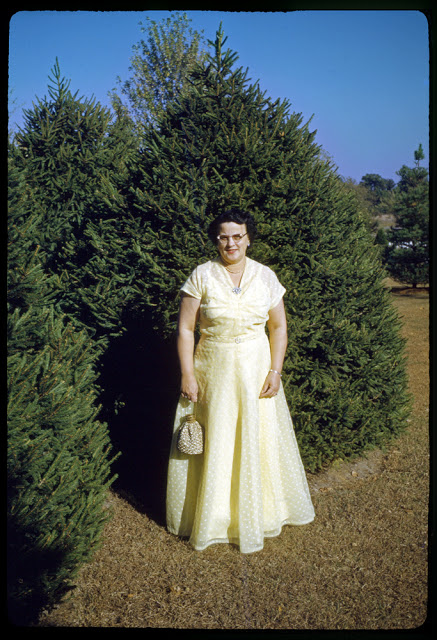 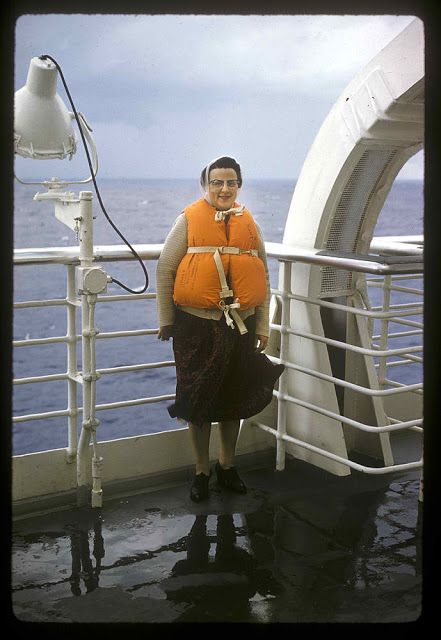 Who is this anonymous couple?  Why did they travel so much?  Where are these people now? 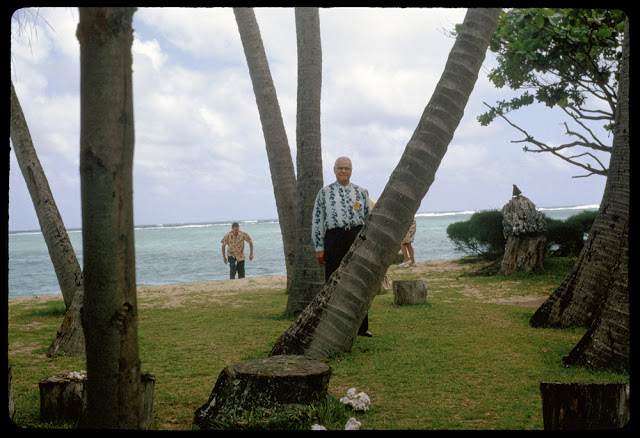 I devised a social media experiment to see how long it would take until someone would recognize their mother, father, grandmother, or brother.   I began posting the unmarked photographs on Facebook.  I created a page entitled  Is This Your Mother?   hoping that people would follow it. Before long, hundreds of people had Liked the page, ultimately combining forces to form a social media search party.   Would it take five years to find the family of this couple?  Ten years?  I had serious doubts that they would they ever be found, but I couldn’t have been more wrong.  Within three weeks, the mystery was solved.  A band of amateur sleuths had successfully identified my enigmatic couple as Harry and Edna Grossman of St. Louis, Missouri. 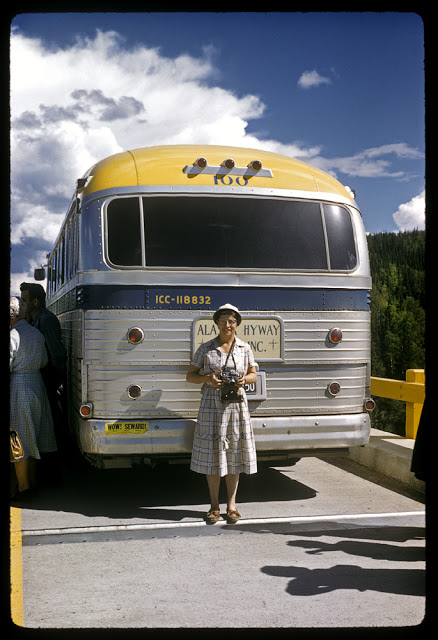 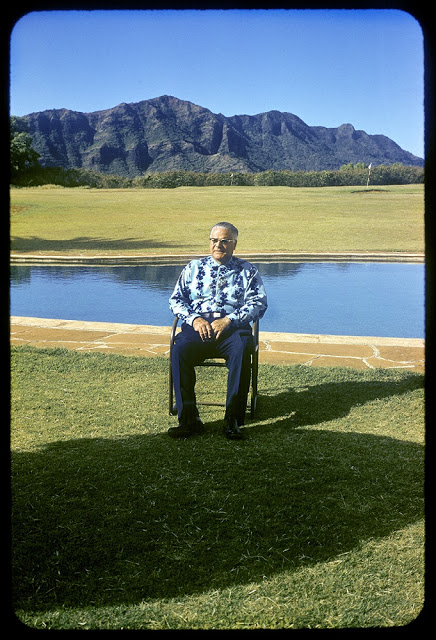 Harry and Edna.  How perfect… right?

When the last photographs of us are gone, is that the moment we are truly forgotten?
The swift resolution to this mystery was satisfying, but the fascinating part of this journey is really about the conversations that occurred along the way—the comments that were posted by followers of the page.   Observing the success of Is This Your Mother? forced me to question some of my firmly-cemented  assumptions about the kindness and generosity of strangers, as well as the benefits of today’s unavoidable collision of photography and technology . 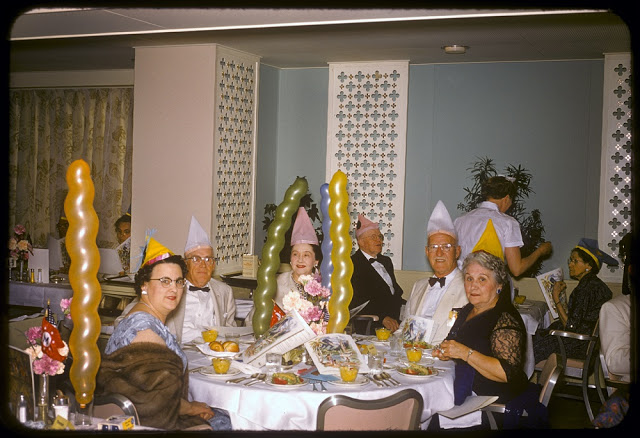 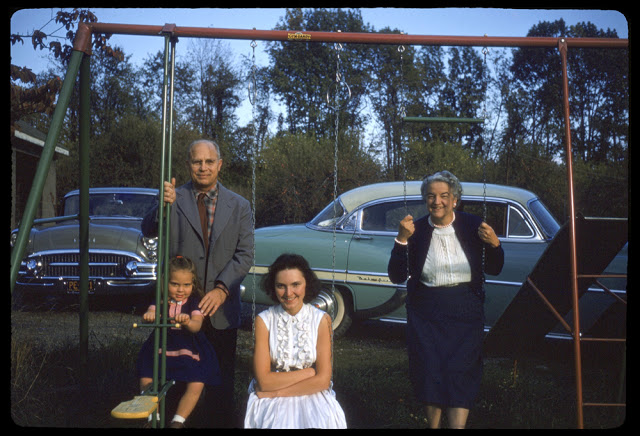 Is This your Mother?  showed me how non-photographers consume photographs.  When a photograph is anonymous—and stripped of its original context—the viewers seemed to be more carefree with his or her own interpretation of an image.    Before Harry and Edna’s identities were discovered, people who visited the page crafted clever fictional captions for each photograph I posted.  Some claimed that they were certain that Harry or Edna were a distant relative.  Other comments strayed toward the dark side, failing to adequately veil the fears or insecurities of their authors. 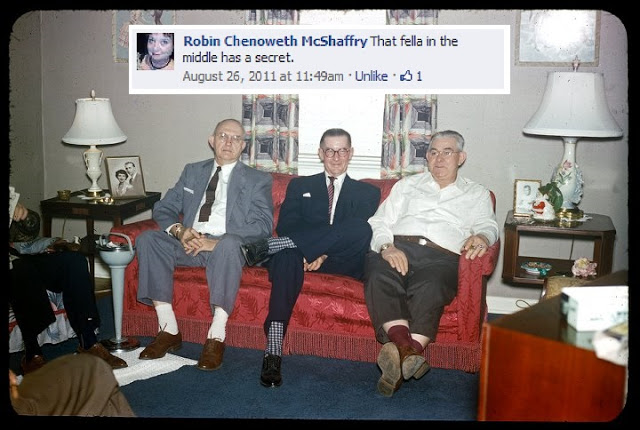 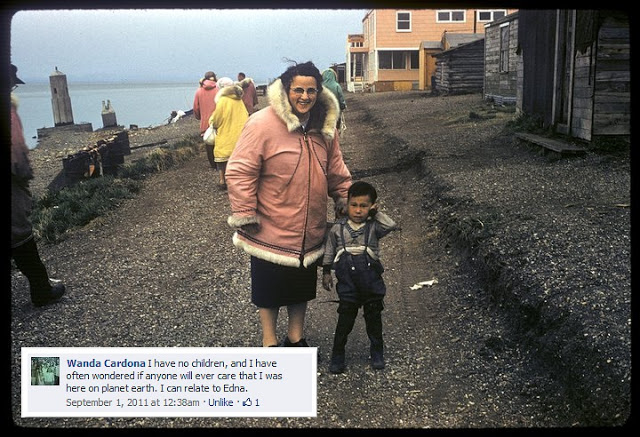 Someone wrote to me and said, “We create photographs so differently today than they did fifty years ago.” Is this really true?

Harry’s photographs remind us of the evolution of our photographic tools in the last 50 years, but not in the direction that you may suspect. Harry used a completely manual camera, and his images were tack sharp and perfectly exposed. Each roll of film gave Harry 36 chances to make a photograph, and in most of the slide trays, no less than 34 out of the 36 were technically perfect. Looking at the slides in their trays, I began to wonder if the way we share photographs today is different than it was fifty years ago. 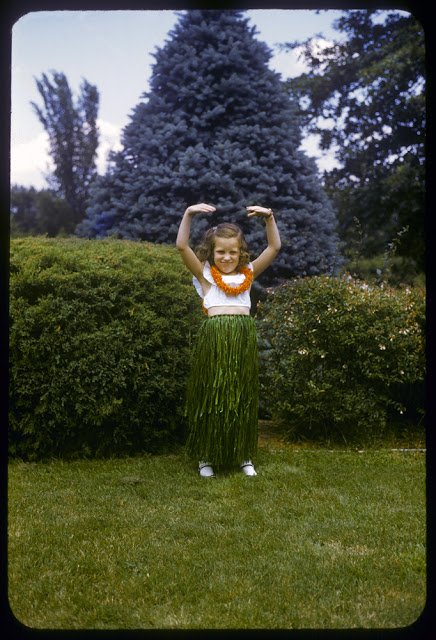 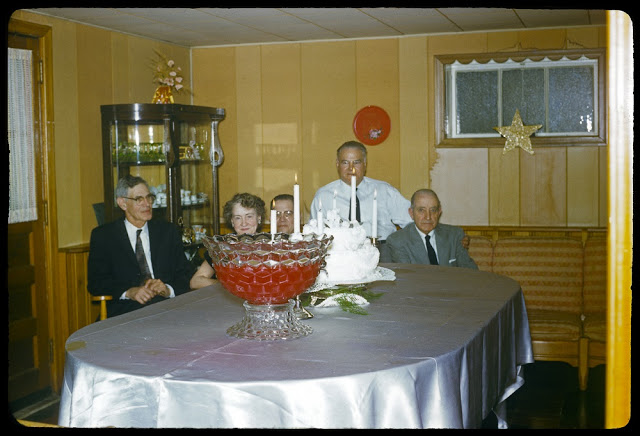 In Harry and Edna’s day, photographic slides were shared with others by gathering together in a living room or basement and projecting the images on a screen (or a white sheet, pinned to the wall.) Any person who has ever been held captive to an old school slide show of vacation photos will tell you that the demise of slide projectors isn’t history’s greatest tragedy. Is today’s constant barrage of I CAN HAS cat pictures and Instagram dinner plate photographs any less painful? 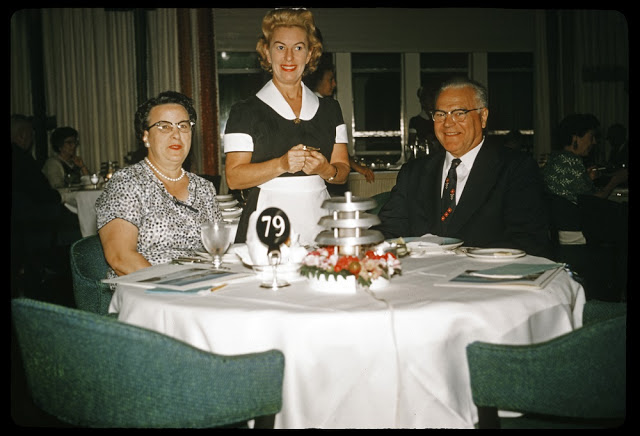 Why did the family discard these family photographs? Is the way we preserve our photographs today any different than it was fifty years ago?

The images of Harry and Edna were discarded because they could no longer be easily decoded – in other words, their “format” was obsolete. Without a projector, the family couldn’t see or share the photographs. Our photographs today are not any safer from obsolescence, especially when a memory card fails or a hard disk crashes—or when we upgrade to the newest mobile device. How will we preserve images for our grandchildren? As the next fifty years passes, will our photographs be within easy reach, online or offline? 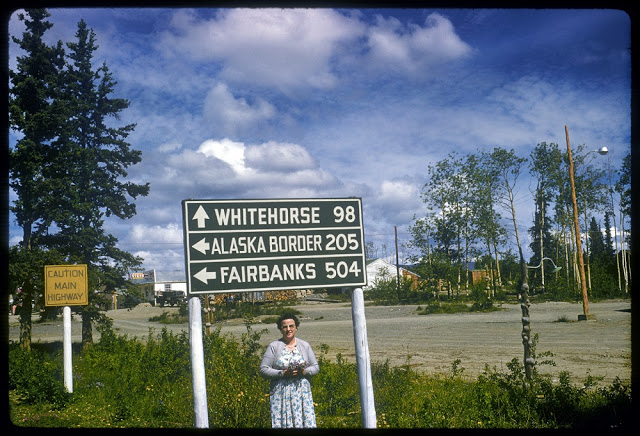 Is This Your Mother? is now a physical exhibition entitled, Lost and Found. The most common question asked of me about the Lost and Found exhibition is, “When first contact was made with Harry and Edna’s relatives, did they demand the return of the slides?” 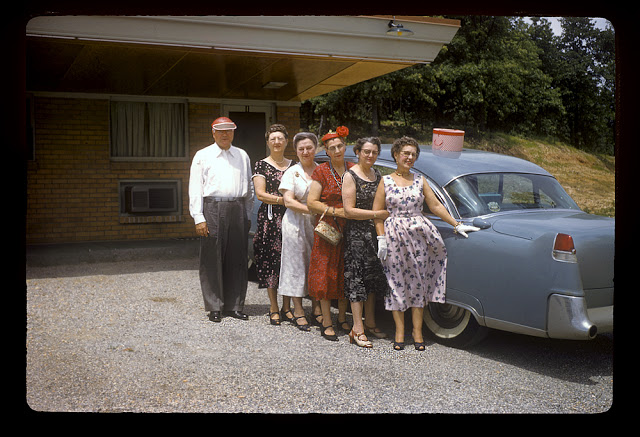 The truth is that the family have been tremendously supportive. Marcia, a great niece, wrote in the family’s very first email to me:
Dear Jeff,
I am one of Harry & Edna’s Great Nieces. I received an e-mail … regarding the FB page. You have gone to great lengths to find our family and it is heartwarming and a little creepy (in a fun way) to see how interested others are in my Great Aunt and Uncle.
–Marcia

I sensed that the family just wanted to see them. Almost immediately, they became active participants in the reactivation of Harry and Edna’s memory. They were modern consumers of their own family photographs, curated by a stranger and delivered through Facebook, the very place where Harry and Edna were rediscovered. 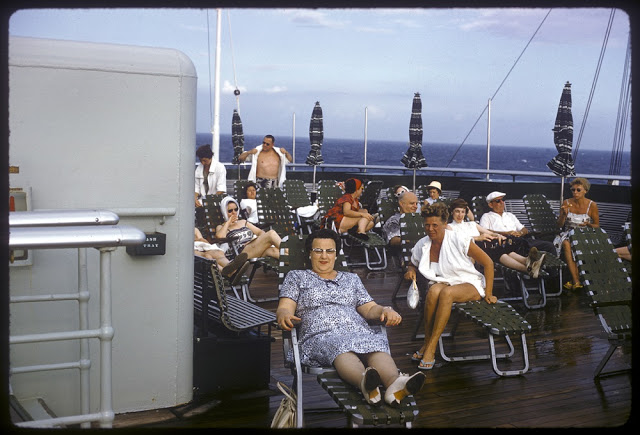 In the Lost and Found exhibition, the gallery wall has become  the Facebook wall – the show integrates the original visitor comments with large format prints made from the Kodachrome slides.  The Facebook crew who discovered the identity of Harry and Edna also helped curate the show – again, through a voting process on Facebook.  The show’s current location in St. Louis, where the gallery has placed billboard ads around the city featuring a 20 foot tall Edna, in her orange life vest.  When I asked a family member to guess how Harry and Edna would react to all of this attention, she replied, “Harry would be cracking up.  Edna would be mortified.” –Jeff Phillips 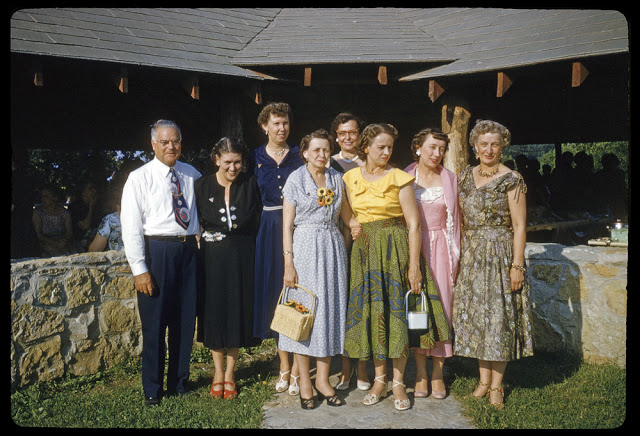 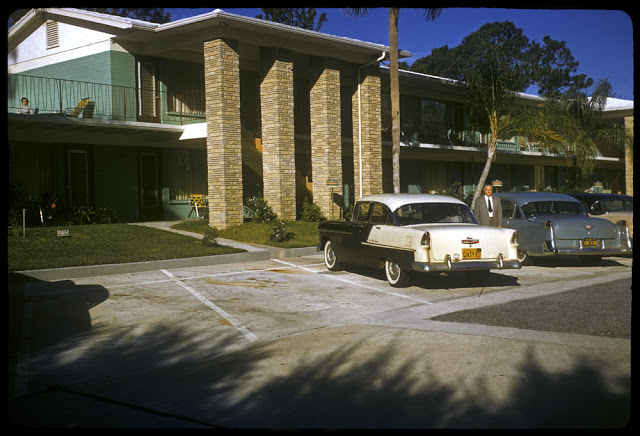 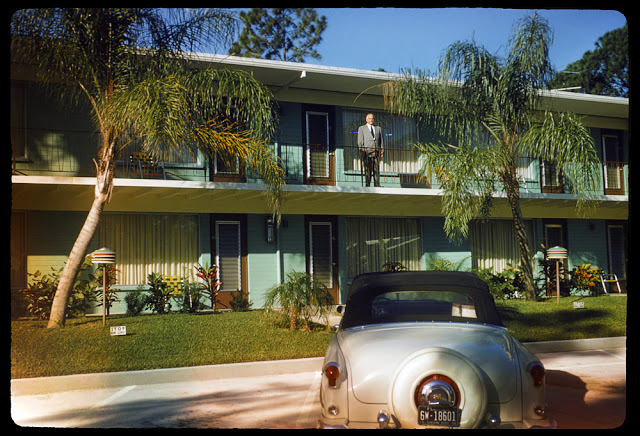