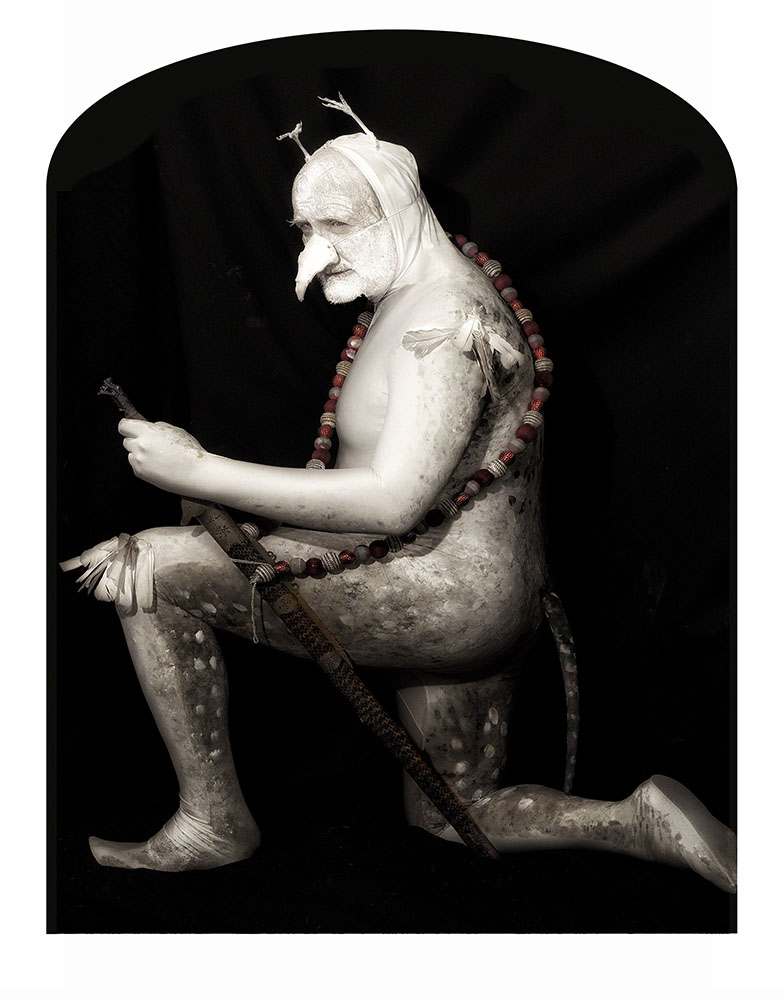 ©Lori Pond, This image is a detail from Hieronymus Bosch’s painting, “The Last Judgment.” The figure I chose to recreate is one of many poor sods who weren’t chosen to go to heaven on Judgment Day. This image is the only one in which the model is not posed as the original. He was actually unwinding himself from a very uncomfortable (but true to the original!) pose and taking a break when I made this.

Los Angeles photographer Lori Pond has had a long fascination with the intricate, bizarre, and surreal world of Hieronymus Bosch, so much so that she has dedicated her artistic pursuits for the last several years to deconstructing his iconic painting, The Garden of Earthly Delights, piece by piece. This love of all things Bosch also led her to Amsterdam to attend the Bosch 500 Festival. Her project, Bosch Redux, recreates sections of the painting with the help of sculptors, costumers, and some very patient models–almost all produced without Photoshop. The focus on minute details allows for a deeper investigation of this masterful painting.

Work from Bosch Redux is on display through July 15 at the Los Angeles Center of Photography’s Fine Art exhibit, juried by Hamidah Glasgow from the Center of Fine Art Photography and was recently exhibited in the “Spectrum Gestalt 3″ at bG Gallery in Santa Monica. More Bosch Redux work will be included in the upcoming LACP Members’ Exhibit at DNJ Gallery in Bergamot Station, July 30-August 26, and the series will be on display in “CA 101″ July 22-July 31 at the South Bay Galleria in Redondo Beach.

Lori grew up in the shadow of Mickey Mouse’s ears in Anaheim, California. She shared a love of music and photography with her father who would take her out to Joshua Tree in the springtime to photograph wildflowers.

Since then, Lori got a Bachelor of Science and Spanish from Indiana University, and also received a Master of Arts degree in Broadcast Journalism at USC. Her love of photography never abated, though. In fact, she has worked as a graphic designer/live graphics operator for television events and productions partially to help pay for her photography habit.

Lori’s award-winning photography has been exhibited in galleries and museums nationally and internationally. Her work resides in the permanent collections of the Center for Fine Art Photography in Ft. Collins, CO, The Center for the Arts in Los Angeles, CA, and at Morgan Stanley headquarters in New York and San Francisco. Her Bosch Redux series has been featured in online blogs such as Adobe Create, Flavorwire, El Hurtador, Dangerous Minds, Neatorama, and Mental Floss. Her series is featured in Issue 13 of Musee Magazine. She also has self-published two books, Lori Pond—Self and Arboreal.
Her work can be found at www.loripond.com 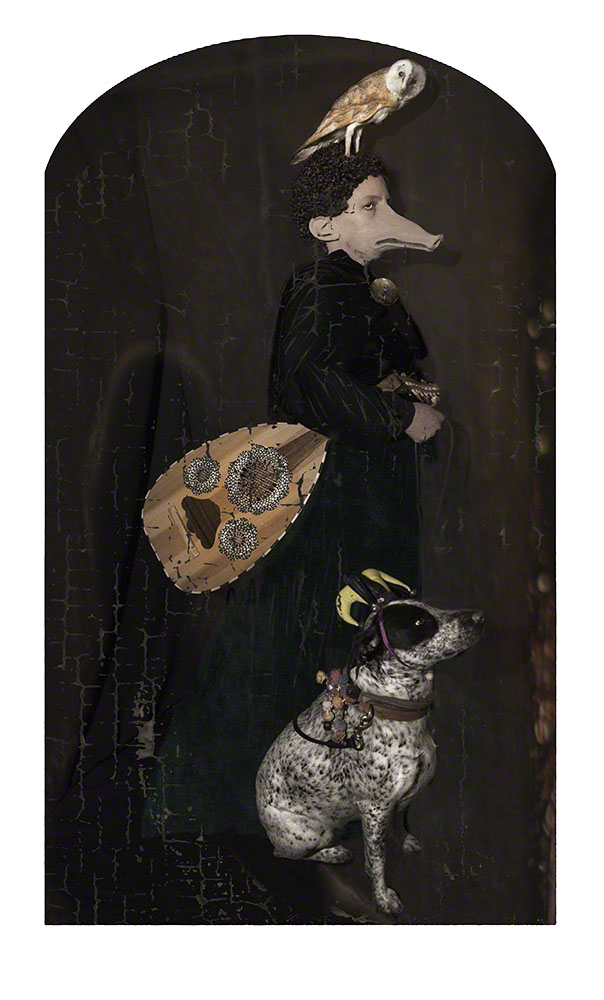 ©Lori Pond, Detail from “Temptation of St. Anthony.” The pig-nosed beggar man represents an illusion conjured up by the Devil to test St. Anthony’s admonishment that man should provide for himself.

Earlier this year, I traveled to Holland to attend the Bosch 500 exhibit and festival in a further effort to understand this great artist. A museum exhibit in his hometown of Hertogenbosch (which was comprised of the biggest inventory of his work ever assembled in one place!) and tours through the local canals, waterways and cathedrals gave me a much better sense of what and why he imagined the things and beings he painted. For instance, he was best friends with was best friends with architect who built the town’s cathedral. One of the tours had me climbing up the side of the cathedral to see its gargoyles. They looked like they stepped right out of a Bosch painting! All over the town were statues of the various characters in Bosch’s paintings; bakeries made special bread in tins decorated with Bosch; I even bought a silk scarf that features adaptations of his flying witches. I was fortunate to go to the Rijksmuseum in Amsterdam, where I dwelled mostly on the Golden Age of Dutch painting. I discovered the depiction of an owl sitting on someone’s head (which is seen in many places of Bosch’s paintings) was quite common among other painters during Bosch’s time. A plaque next to such a painting explained that in the 1500s, the owl symbolized stupidity and foolishness. I also got to Holland at the apex of tulip season, and I toured the famous Kukenhoff tulip gardens. 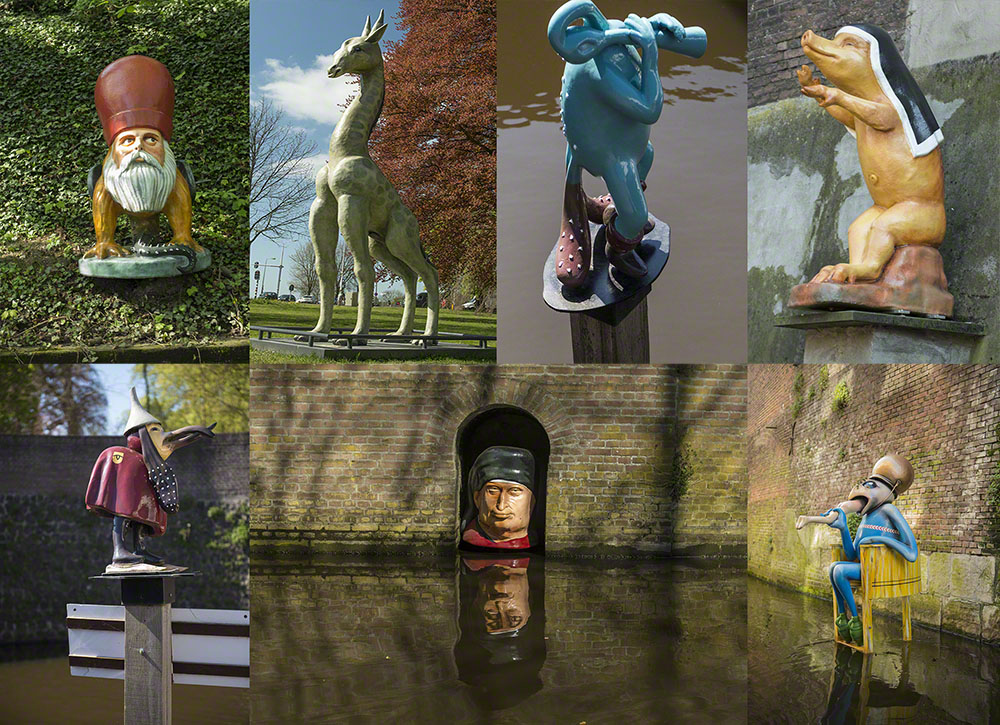 ©Lori Pond, All over the town of Hertogenbosch, Boschian statues were erected in honor of his life and work. 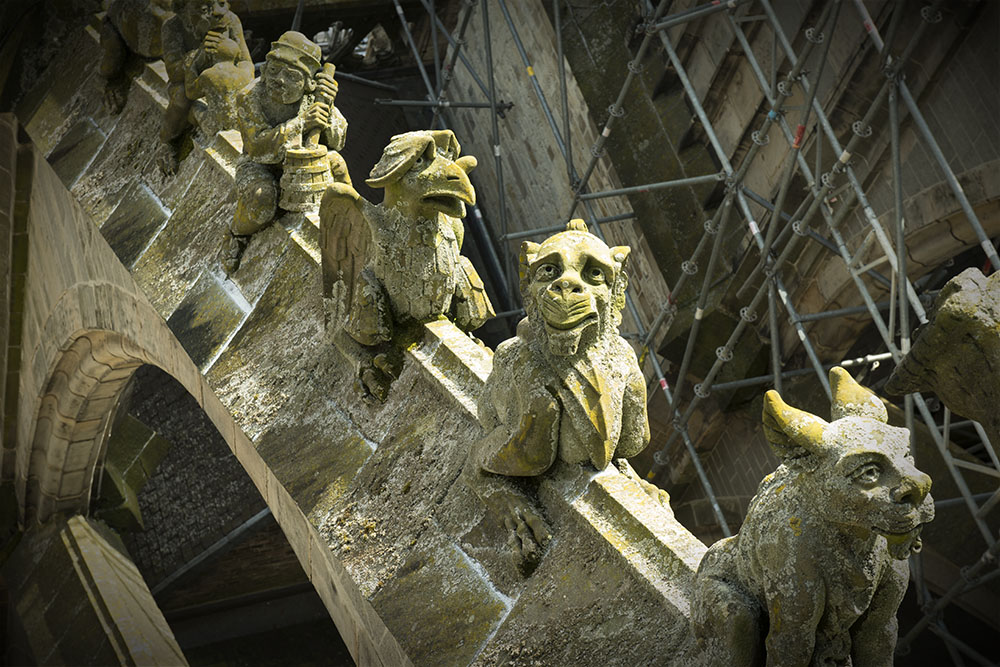 I became fascinated with Bosch’s Garden of Earthly Delights as a teenager. His limitless imagination and intricately detailed images captured my mind. In Bosch Redux, I hone in on details that occupy the background of his work.

I put them center stage, using models, wardrobe, special prosthetics and specially-built props to recreate the original painting as a photograph. Bosch’s bizarre images also speak to my own fascination with oddities and outcasts. 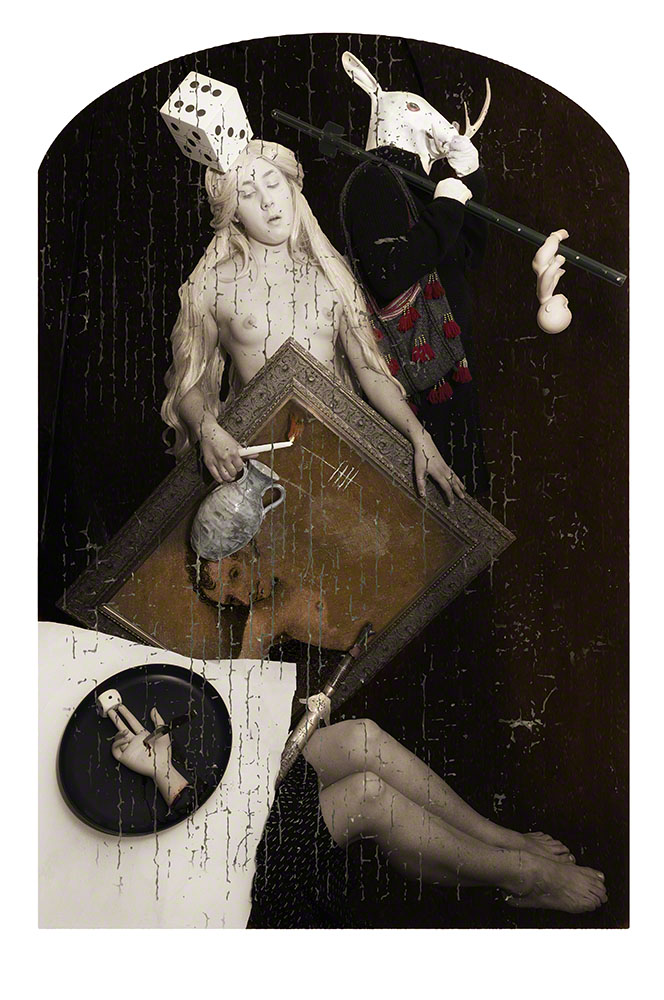 ©Lori Pond, Next to what I call “Musicians’ Hell” in the right panel of “Garden of Earthly Delights” there is “Gambling Hell,” which reveals some unusual consequences of gambling…

As a kid, I was absorbed by horror movies and “The Twilight Zone.” On my bedroom door I taped a photo of the fattest twins in the world riding minibikes side-by-side. My mom would periodically throw out this picture, but I always found it and re-taped it to my door. I cherished weirdness in all forms, since I grew up in Anaheim, where everything and everybody looked the same. Bosch further intrigued me because there was so little known about him – what he believed in, what he thought, who he was. I felt compelled to use my medium of photography to try to understand him, to inhabit his world and his mind.

For me, delving into the art of Bosch not only tests my studio photography skills, I’m getting a unique opportunity to (in a photographic sense, anyway), occupy a historical age vicariously through art. 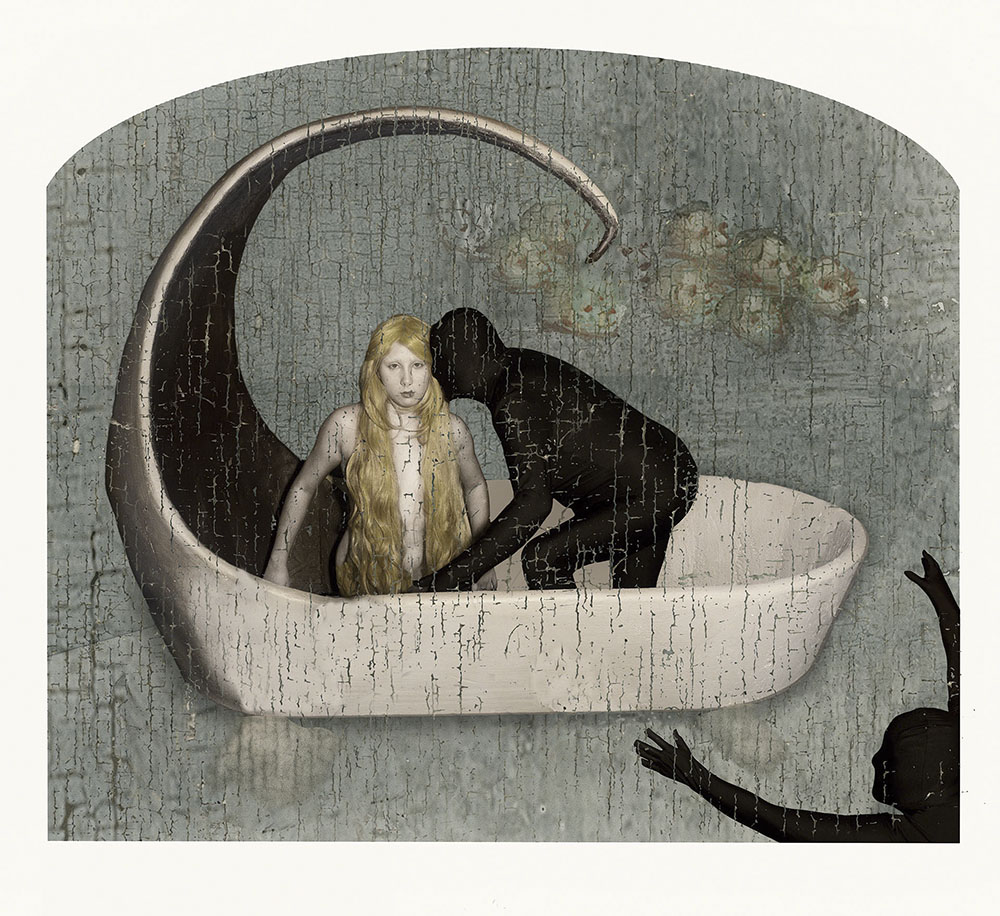 ©Lori Pond, Bosch Redux #4, This is a recreation of a very small detail in the central panel of Bosch’s “Garden of Earthly Delights.” A lot of questions surround the “pleasure garden” depicted. Is it a literal interpretation of the “forbidden fruits of life,” or is it just an earthly paradise? For this photograph, I hired a set builder to construct the life-size boat, so the two models could fit inside it. 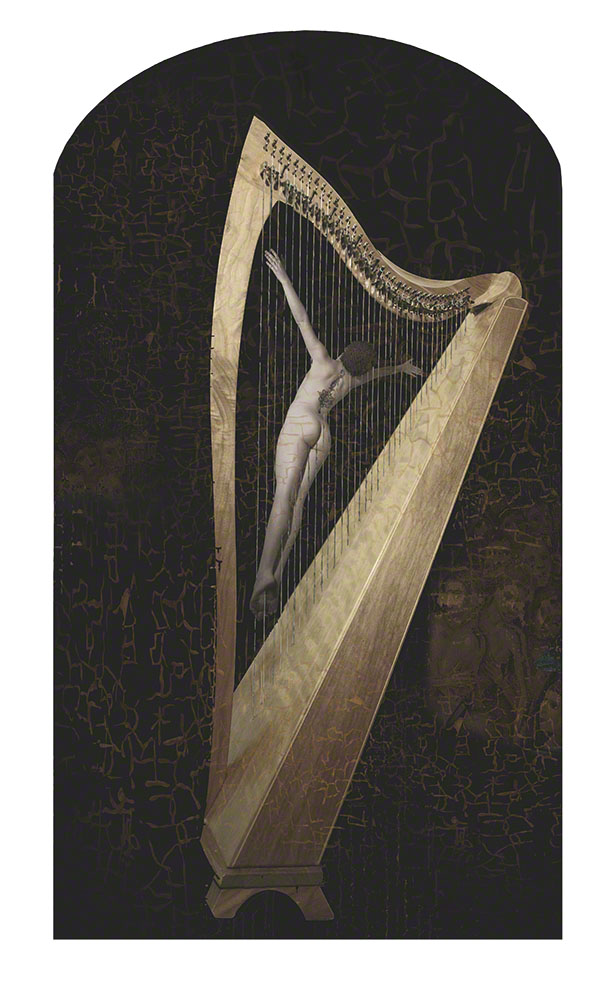 ©Lori Pond, This image is based on a scene from the Hell panel in the “Garden of Earthly Delights.” Specifically, this person is strung up in a harp as punishment for playing lascivious, sinful music. 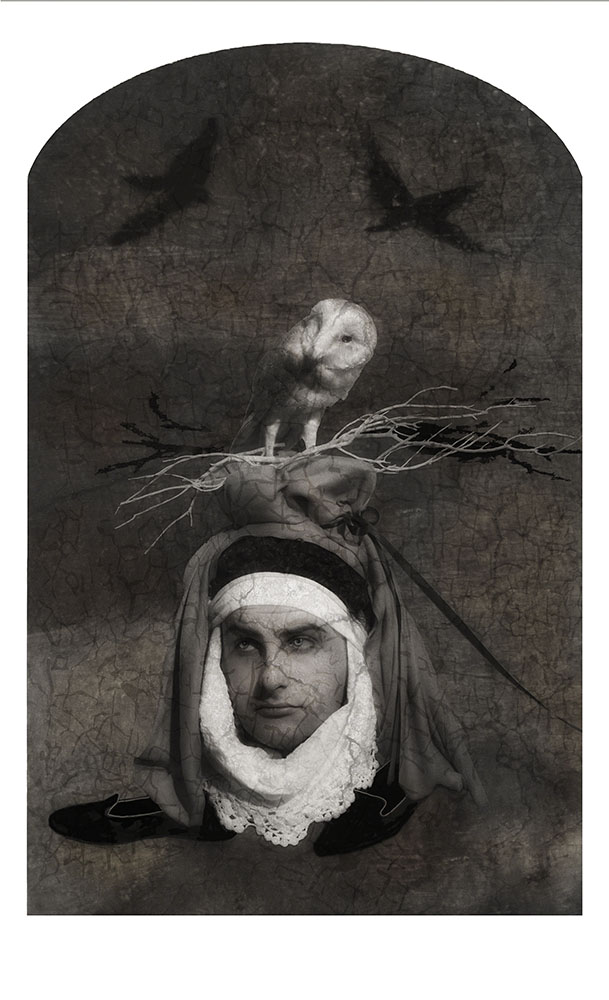 ©Lori Pond, Hieronymus Bosch’s “The Hermit Saints” triptych was the inspiration for this image. According to traditional Dutch proverbs and Dutch Golden Age painters, an owl sitting atop someone’s head identified that person as foolish. 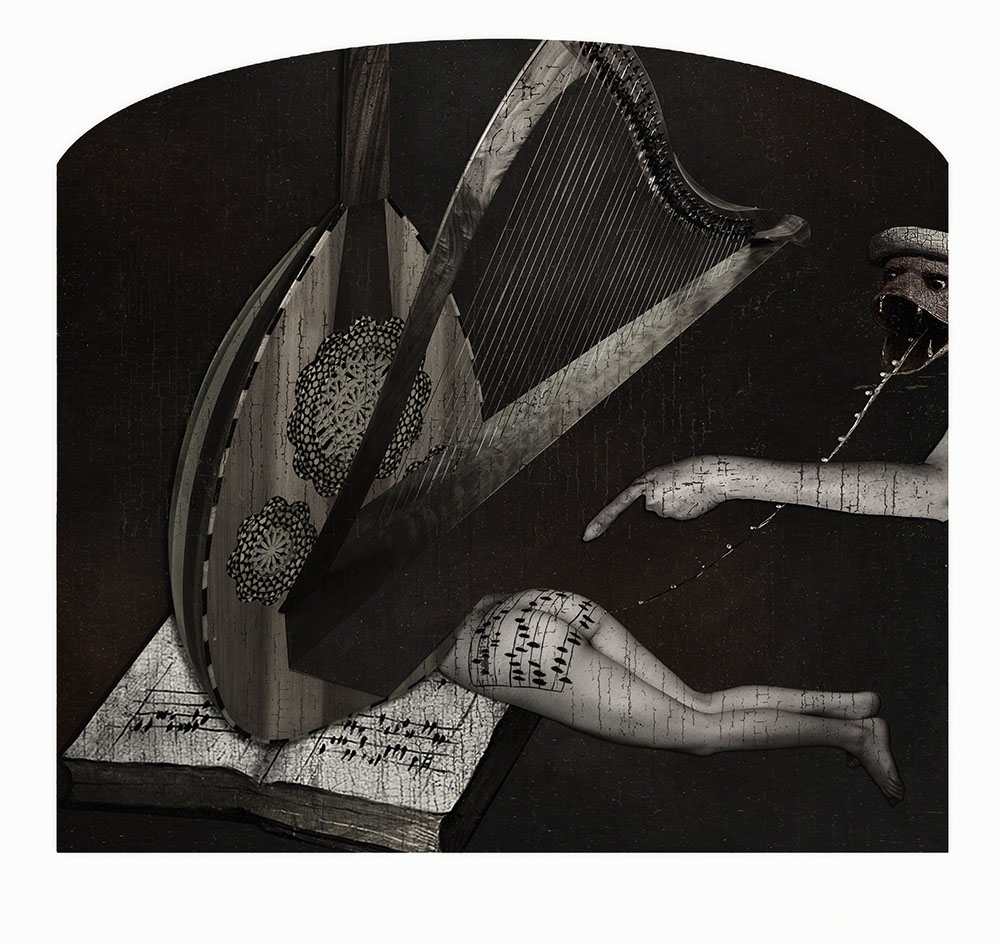 ©Lori Pond, From the right hand panel of Bosch’s “Garden of Earthly Delights,” we see Musician’s Hell. Bosch belonged to a religious order in his hometown of Hertogenbosch and his paintings reflect his moral beliefs. The detail I’ve chosen to depict is musicians being tortured because of their seductive music inciting lust. 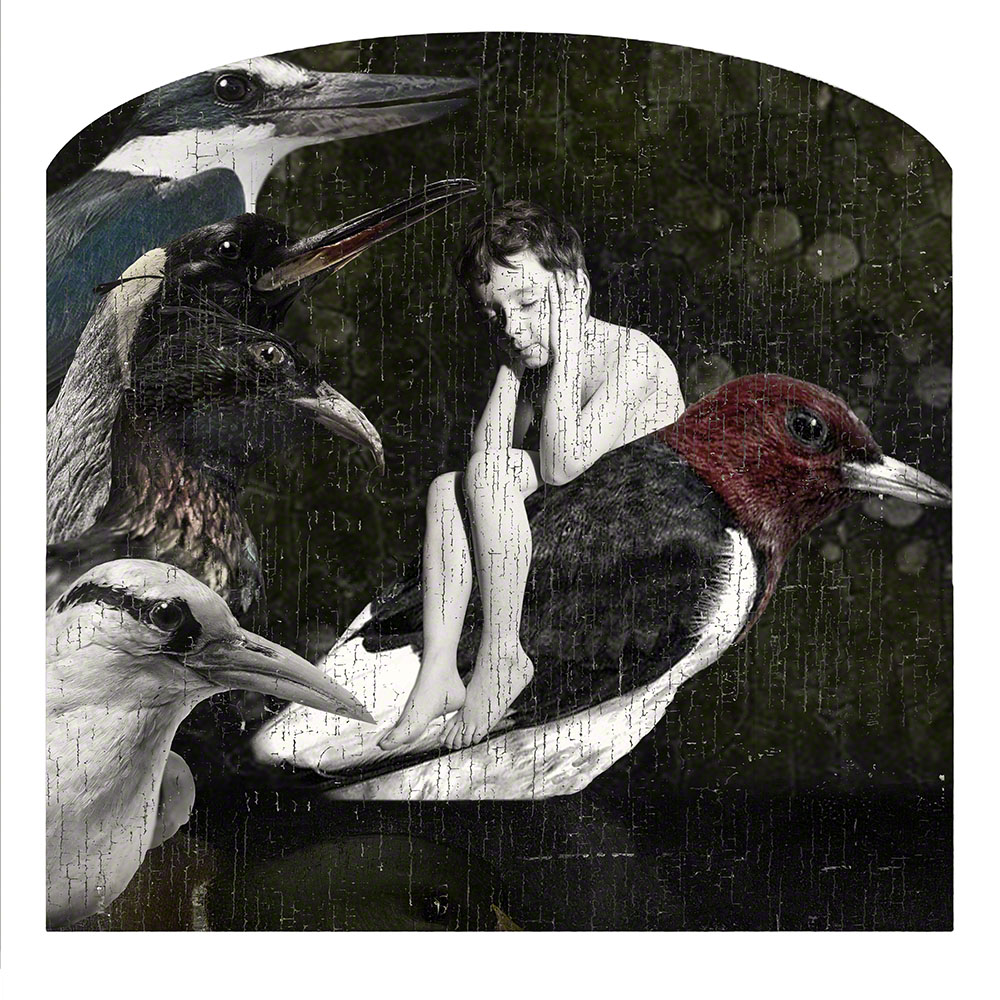 ©Lori Pond, Some theorists of Bosch’s works think “Garden of Earthly Delights” was displayed for moral instruction to Henry III. 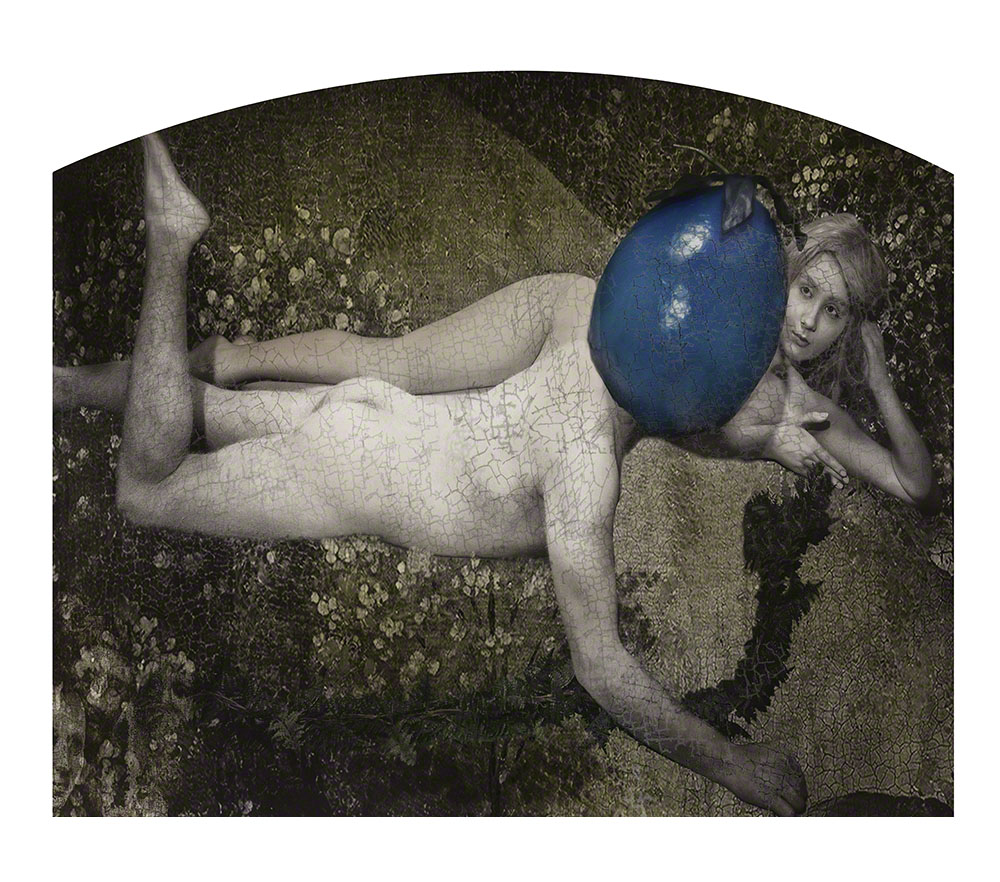 ©Lori Pond, From the central panel of “Garden of Earthly Delights.” Is this detail the progenitor of the quinteseential party guy with the lampshade on his head??? 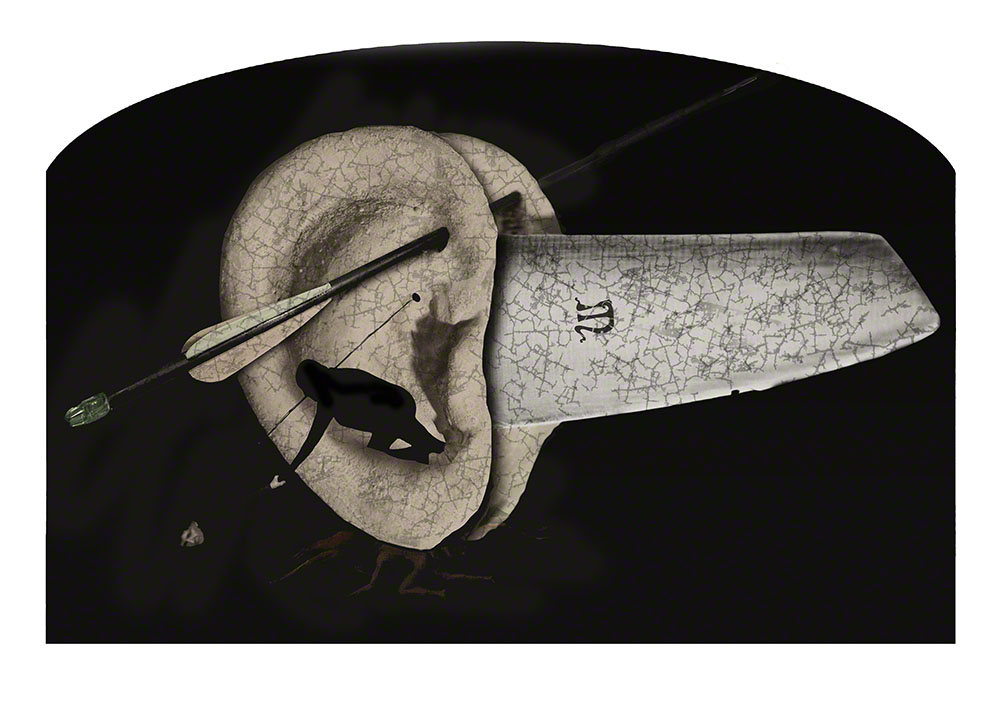 ©Lori Pond, These ears are probably being punished for listening to overtly sensuous music. They are impaled right above a pink, phallic-like bagpipe in the Hell Panel in “Garden of Earthly Delights.”

©Lori Pond, I recreated a detail from the central panel in the triptych “Garden of Earthly Delights” by Hieronymus Bosch. As much as possible with my project “Bosch Redux,” I try to shoot as much in camera as possible, only resorting to Photoshop to composite background details from the original paintings behind the photograph. In this image, my model is really holding a slimy, 22-pound fish! 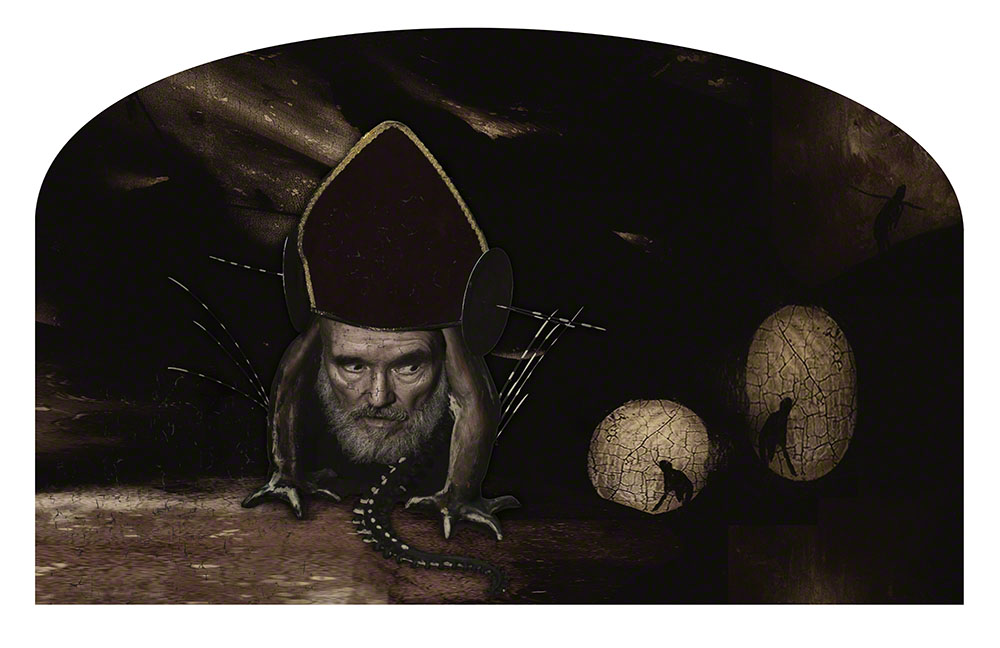 ©Lori Pond, Detail from “The Last Judgment.” Art critics quote Revelations to explain Bosch’s strange figurations: “But the cowardly, unbelieving, abominable, murderers, sexually immoral, sorcerers, idolaters and all liars shall have their part in the lake which burns with fire and brimstone, which is the second death.” (Rev. 21:8) 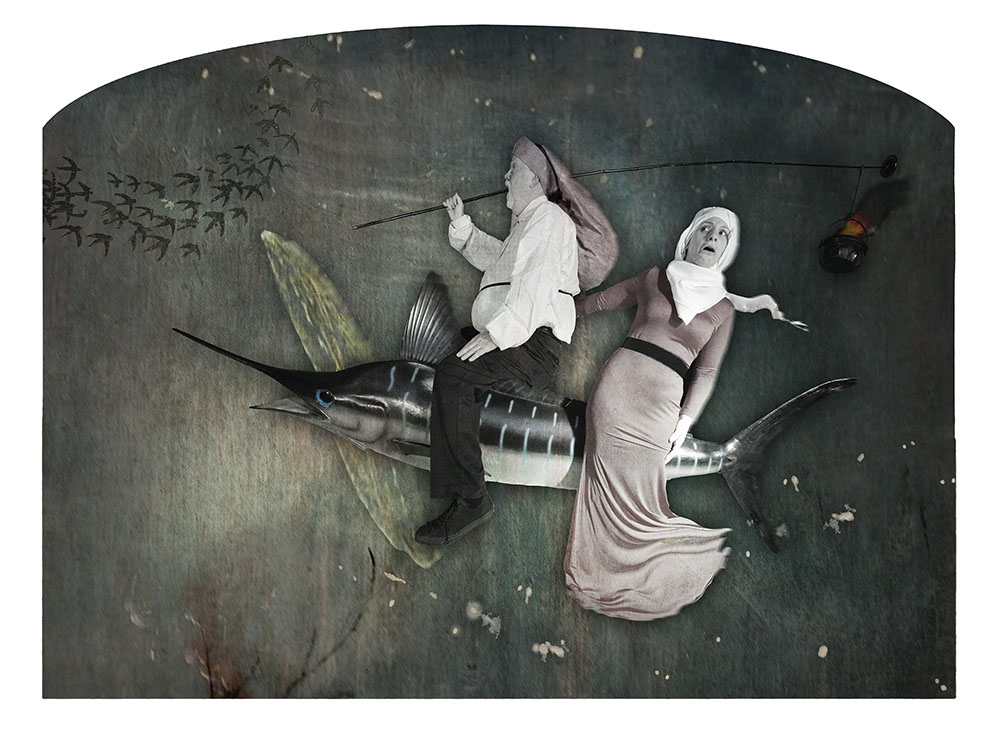 ©Lori Pond, According to Chris Will, author of “Hieronymus Bosch: Between Heaven & Hell”, the two people riding on the back of the fish are witches on their way to a witches’ sabbath, which they can only get to with the devil’s help. (recreated detail from the right panel of “The Temptation of St. Anthony,” by Hieronymus Bosch. 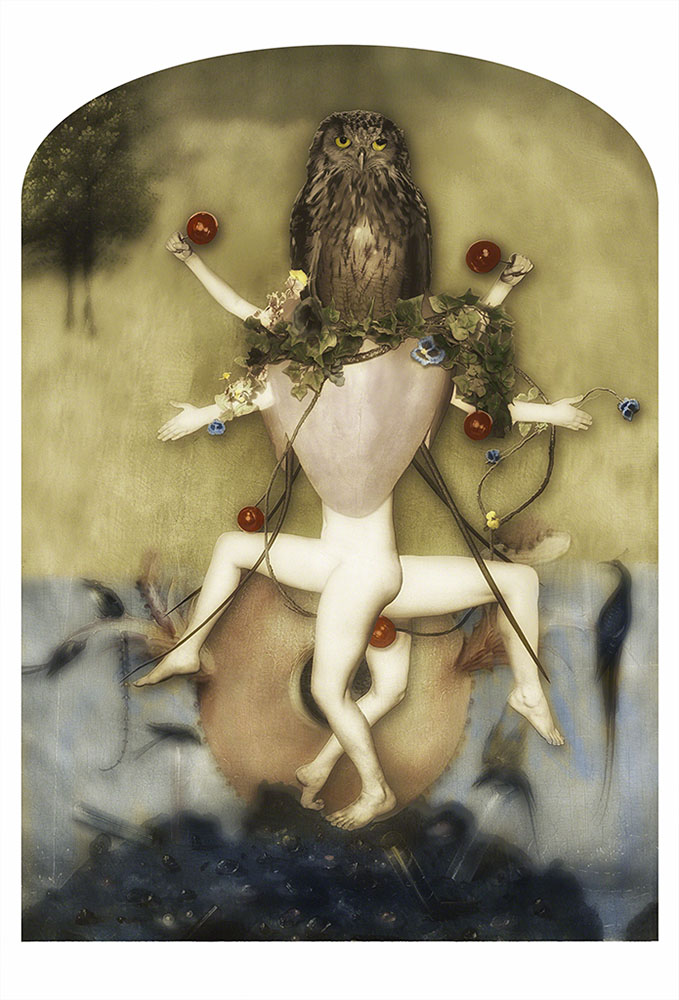