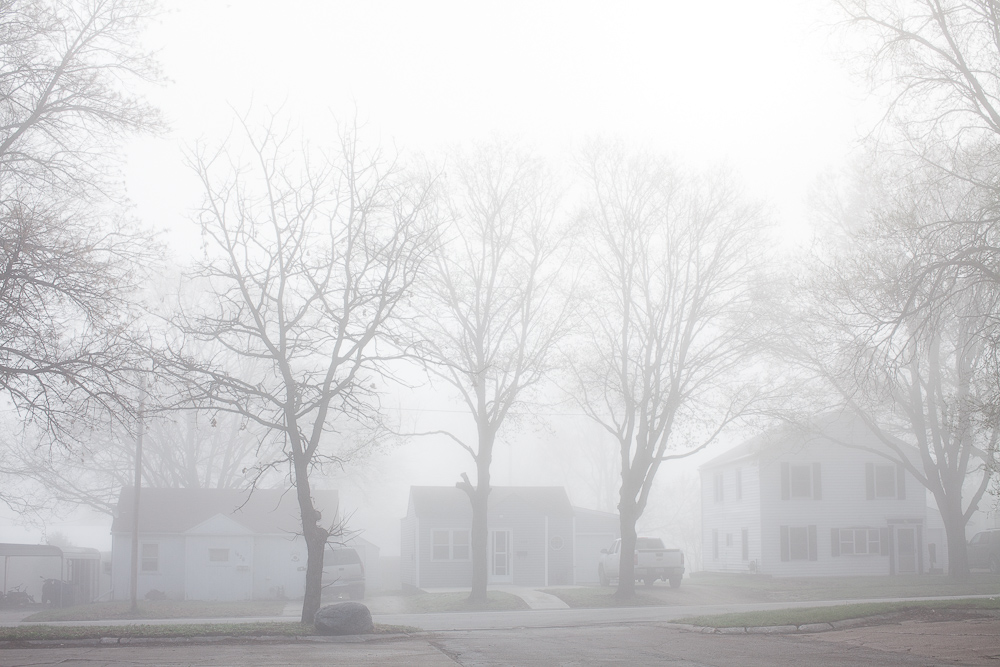 Brendan Hoffman ‘s project, Webster City, speaks, in a profound way, to America today. It’s the America that is often overlooked, often forgotten, and may have affected the outcome of our recent presidential election. What happens to a community reliant on one employer, when that company moves its business elsewhere?  Brendan has provided a thoughtful photographic essay on Americans trying to cope with change and loss, noting his own struggles with the dilemma of a journalist interpreting a community and a lost American dream, as an outsider.

Brendan Hoffman (b. 1980, Albany, NY, USA) is a documentary photographer based in Kiev, Ukraine, where his work reflects his interest in themes of nationalism, identity, history, and politics. His recent focus has been on Ukraine and the war in the country’s east, which he has covered for The New York Times, Newsweek, Getty Images, and others. Before that he documented the 2013-14 Maidan protests in Kiev. His book length project “The Beating of the Heart” is an exploration of contemporary Middle America in the context of free trade, the decline of blue-collar jobs, and economic and political polarization through the lens of a small town in Iowa. From 2007 to 2013, he was based in Washington, DC, and frequently worked on Capitol Hill and at the White House. Brendan’s work has been recognized by Sony, the Alexia Foundation, NPPA Best of Photojournalism, Pictures of the Year International, American Photography 29, the White House News Photographers Association, and other organizations. He has worked in a variety of countries for both editorial and NGO clients, and is a co-founder of the photography collective Prime. 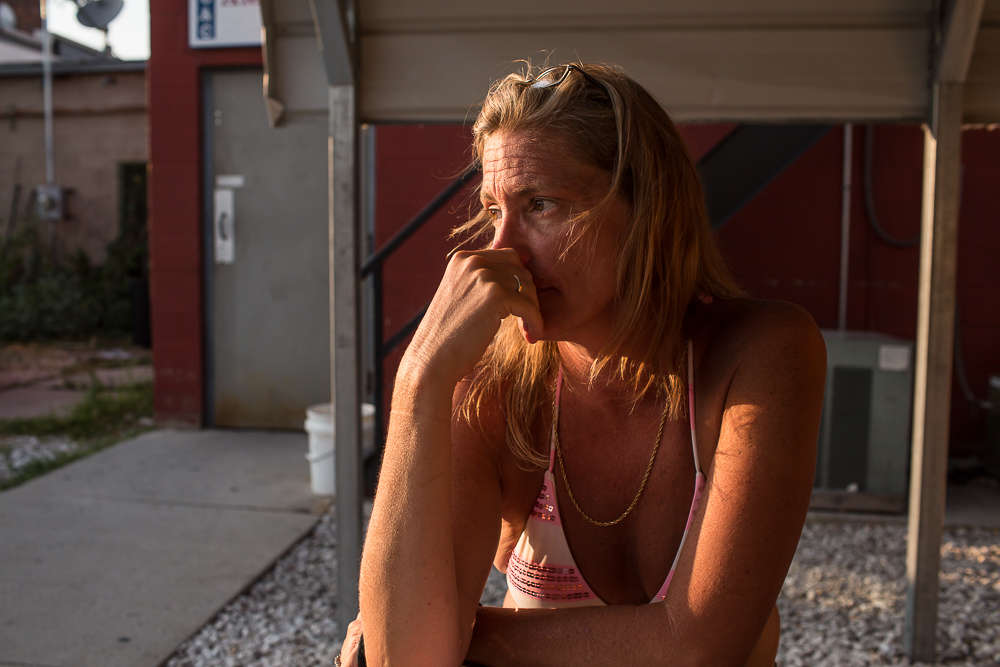 In March 2011, Webster City’s main employer, Electrolux, shut down and moved production to Mexico. The company and its predecessors had made washing machines in the small Iowa town of 8000 under various brand names since 1937. Nearly all of a workforce that once topped 2000 was laid off.

I was drawn to photograph in Webster City because I was attracted to the twin narratives of hardship and resiliency, with a desire to create a record of the shutdown’s rippling consequences and how individuals confront circumstances differently. It is in part an attempt to understand the changes taking place among the middle class in America today, as the Great Recession fades while few feel confidence in their economic future.

Very quickly, however, I found myself equally attracted by the simple fact that although I enjoyed the company of the people I met in Webster City, I struggled to identify with them. From the standpoint of a journalist, to empathize is critical to honest and informative storytelling. Intellectually, I could sympathize with their struggles, yet on an emotional level I couldn’t imagine living their lives, or wanting to. I struggled to bridge the gap and, as much as anything, to do so became the goal of my work. 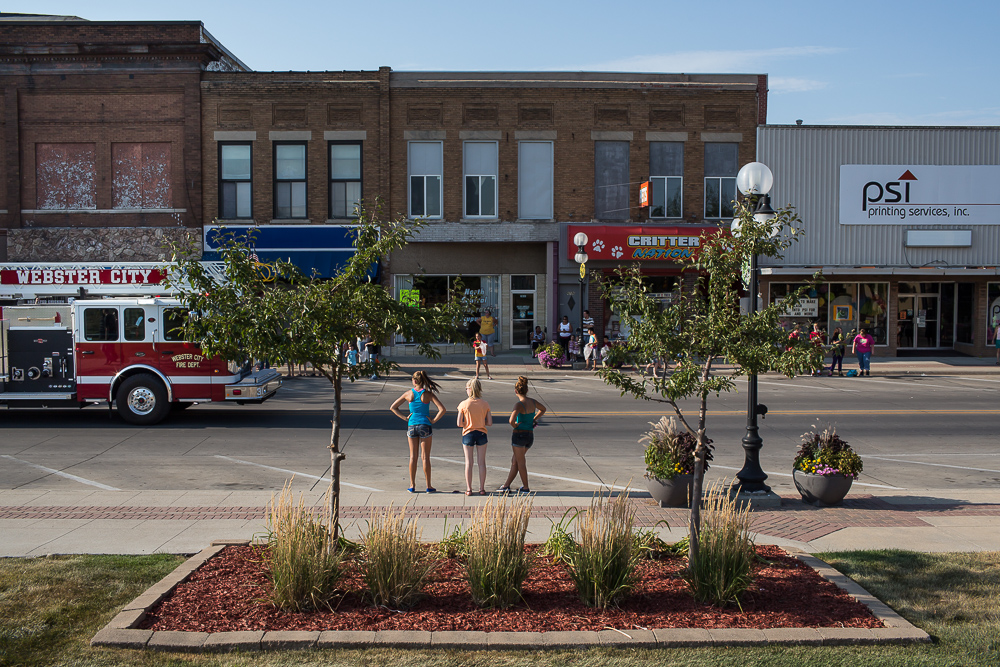 I proceeded over the next several years to visit more than a dozen times, photographing life in Webster City as well as my own experiences and responses to it, trying to better understand the people I began to consider friends and what truths they knew that I was missing. The people of Webster City, and places like it spread throughout the Rust Belt, finally made their message heard when Donald Trump was elected President of the United States.

I hesitated for a long time to publish this project because of my concerns about representation and whether my outsider view fairly described the struggles of people I didn’t truly understand. I now believe this lingering question is an inherent, even critical, part of the work, subtly illuminating the gulf between white, blue-collar Americans drawn to the Trump phenomenon and my own skeptical views.

This divide, however, is beyond political: it is structural, and it represents one of the most critical issues facing America today. 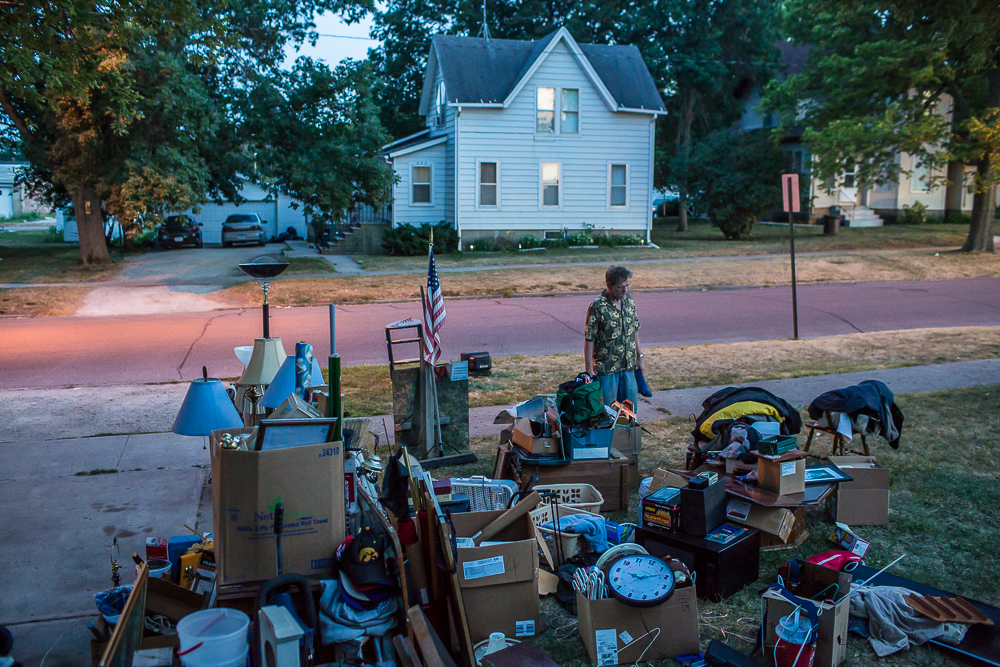 ©Brendan Hoffman, Lloyd Heslop looks at his belongings scattered in the yard after being evicted from his apartment on Monday, July 16, 2012 in Webster City, IA. 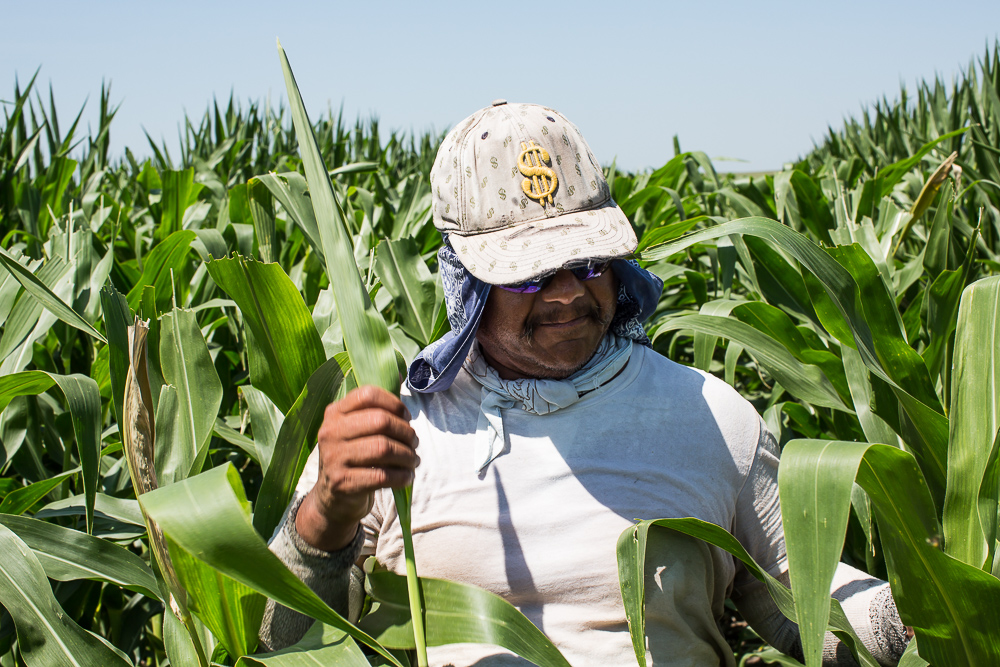 ©Brendan Hoffman, A man detassles corn in a field on Tuesday, July 17, 2012 near Webster City, IA. The seasonal job, which used to employ mostly local children, has increasingly been taken over by Mexican immigrants. 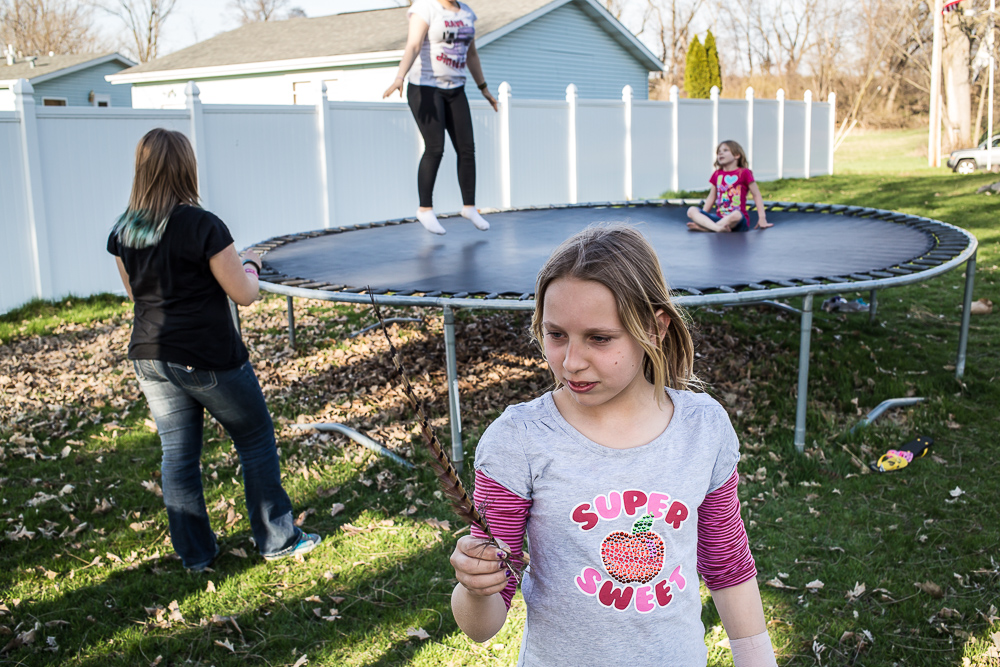 ©Brendan Hoffman, Girls play with a found feather and trampoline in their back yard on Sunday, April 28, 2013 in Webster City, IA. 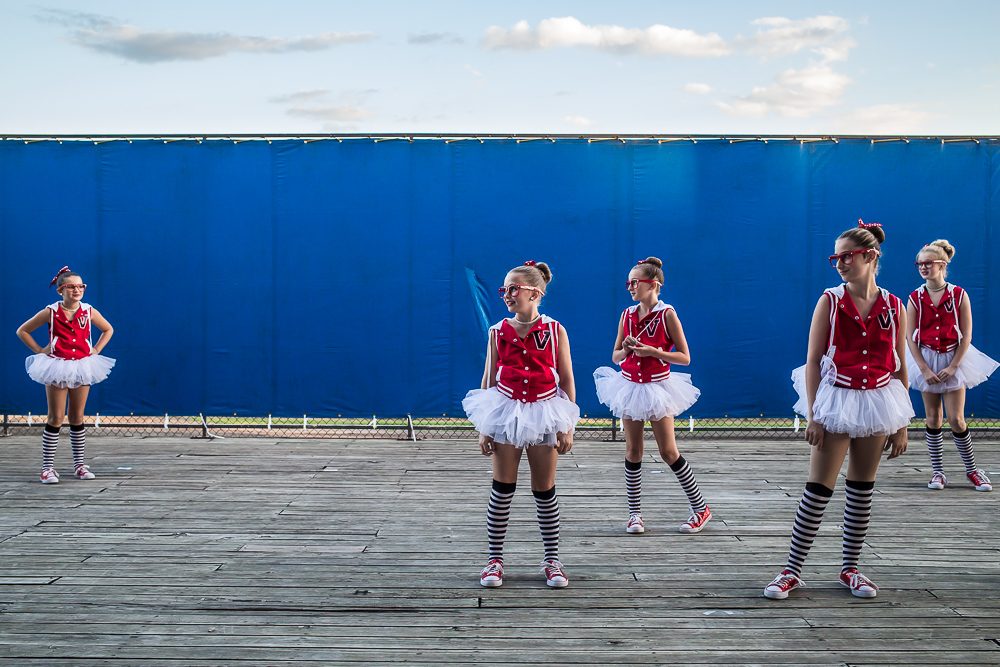 ©Brendan Hoffman, Girls prepare to perform a dance routine before the coronation of the Hamilton County Fair Queen on Wednesday, July 24, 2013 in Webster City, IA. 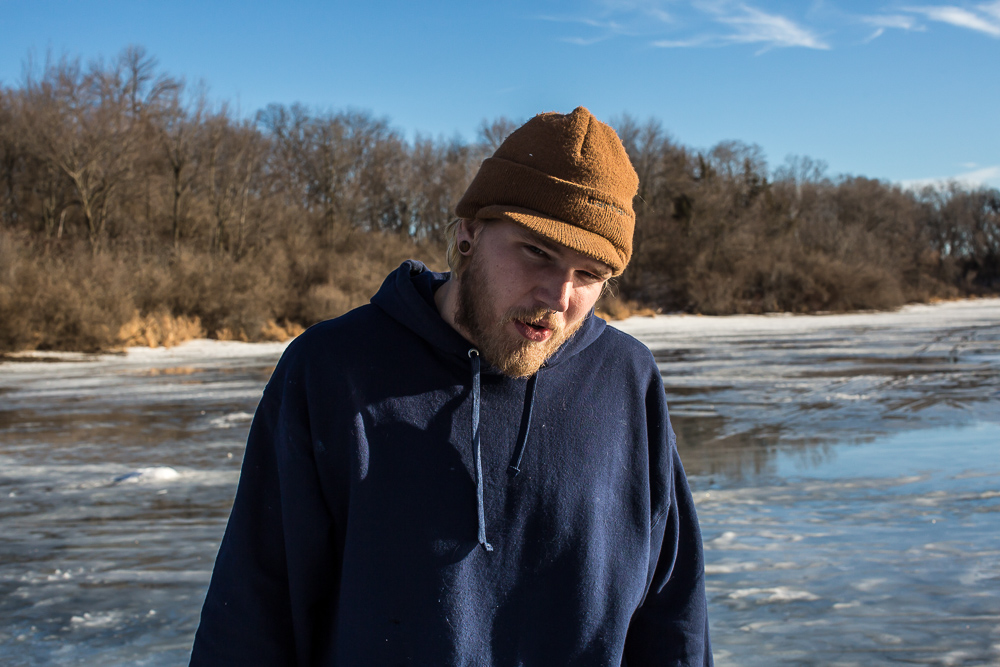 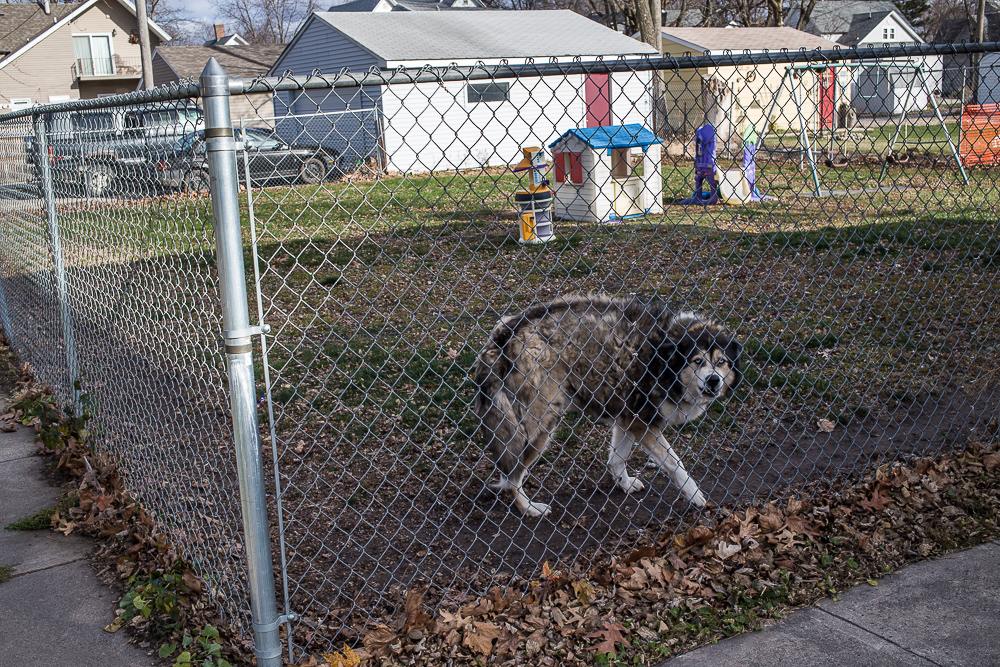 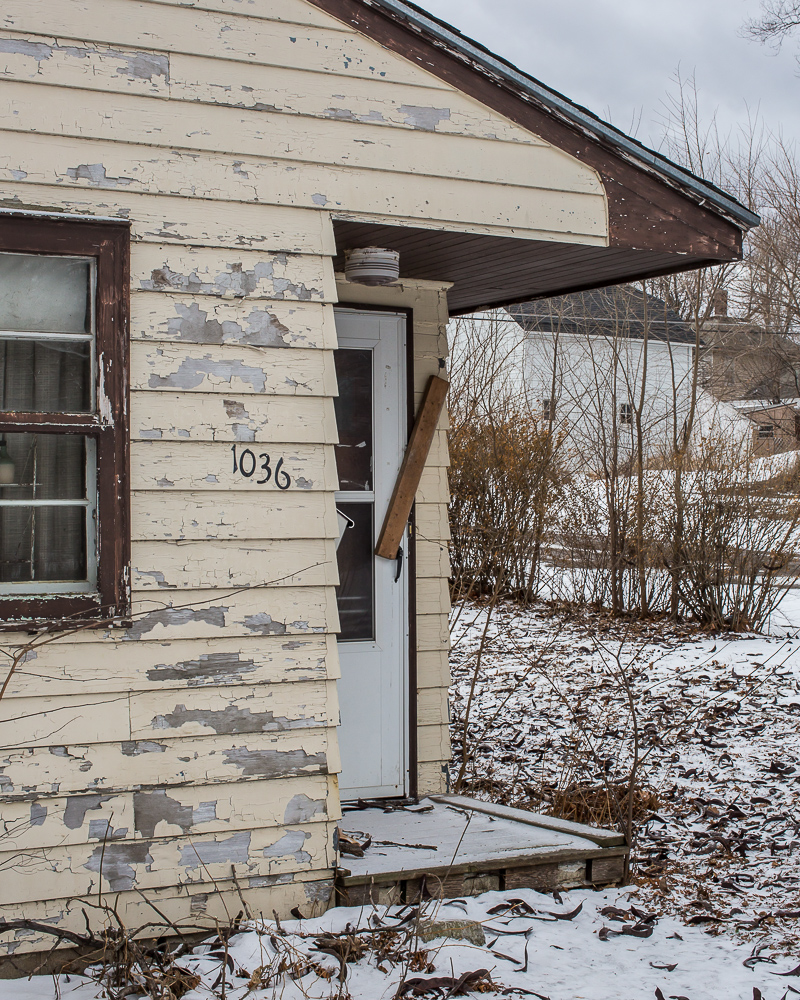 ©Brendan Hoffman, The door to an abandoned house is sealed with a board on Thursday, January 16, 2014, in Webster City, IA. 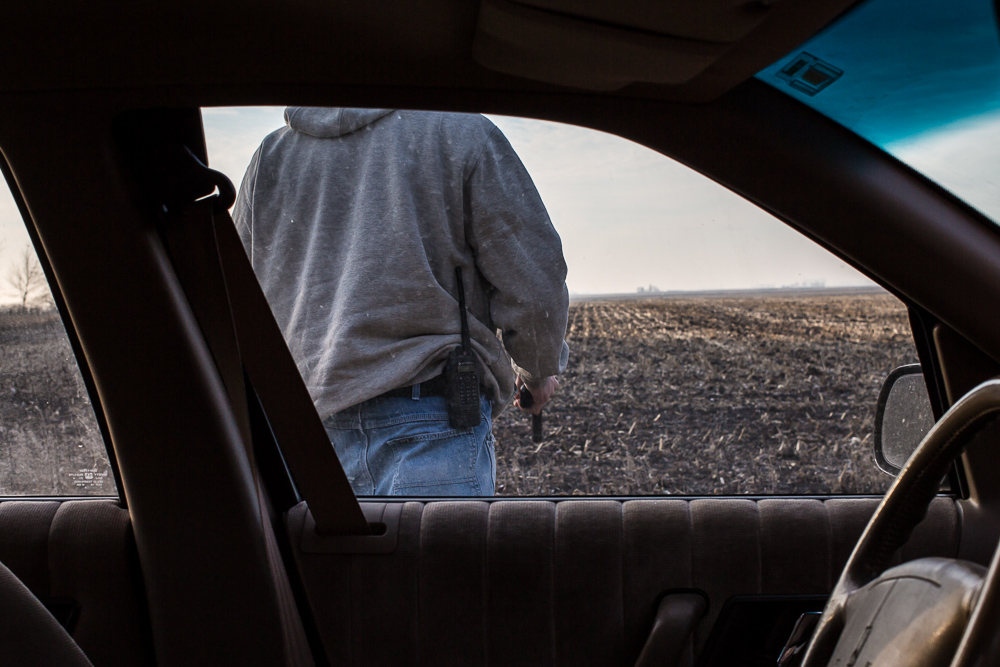 ©Brendan Hoffman, Bryan Dayton takes a handgun to shoot a trapped raccoon, which he will sell for fur, on Saturday, November 17, 2012 in Webster City, IA. 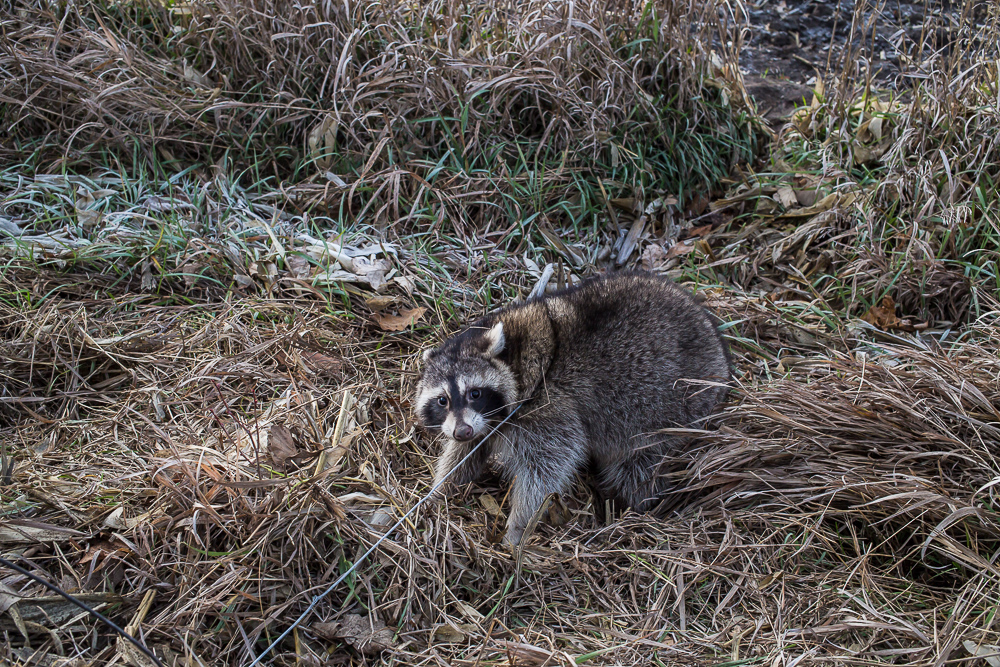 ©Brendan Hoffman, A raccoon, trapped in a snare by Bryan Dayton, awaits its fate on Saturday, November 17, 2012 in Webster City, IA. 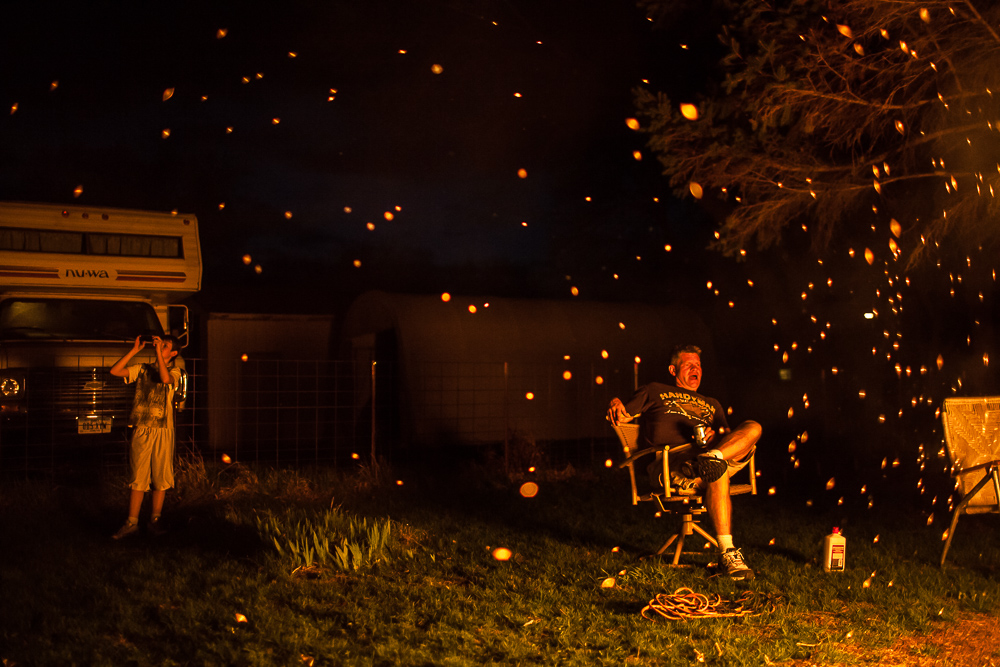 ©Brendan Hoffman, Joe McFarland, left, takes a picture as Steve McFarland watches a bonfire burn in his back yard on Sunday, March 25, 2012 in Webster City, IA. 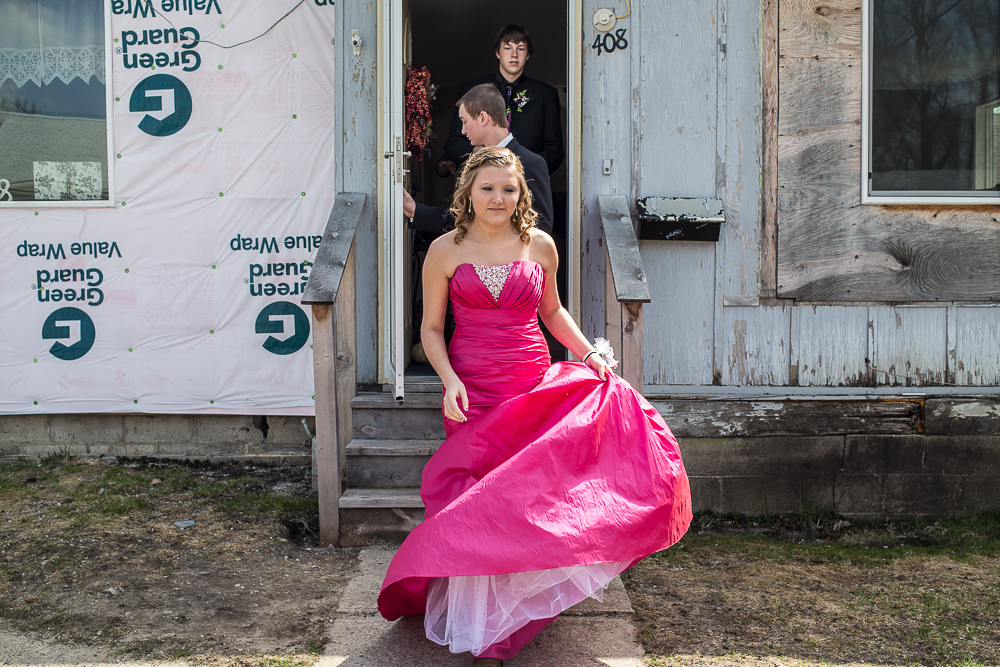 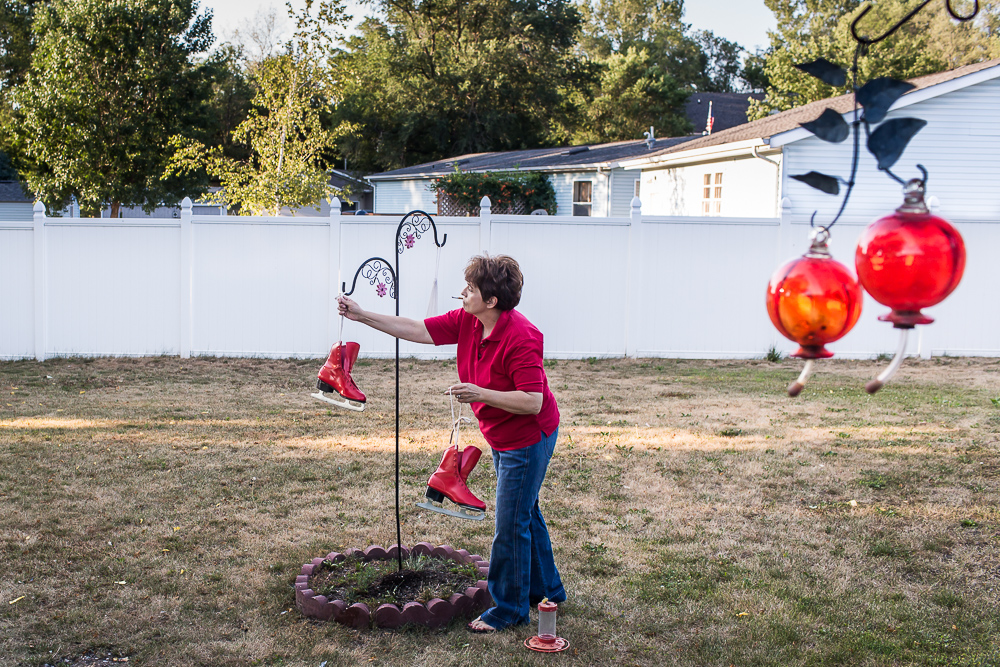 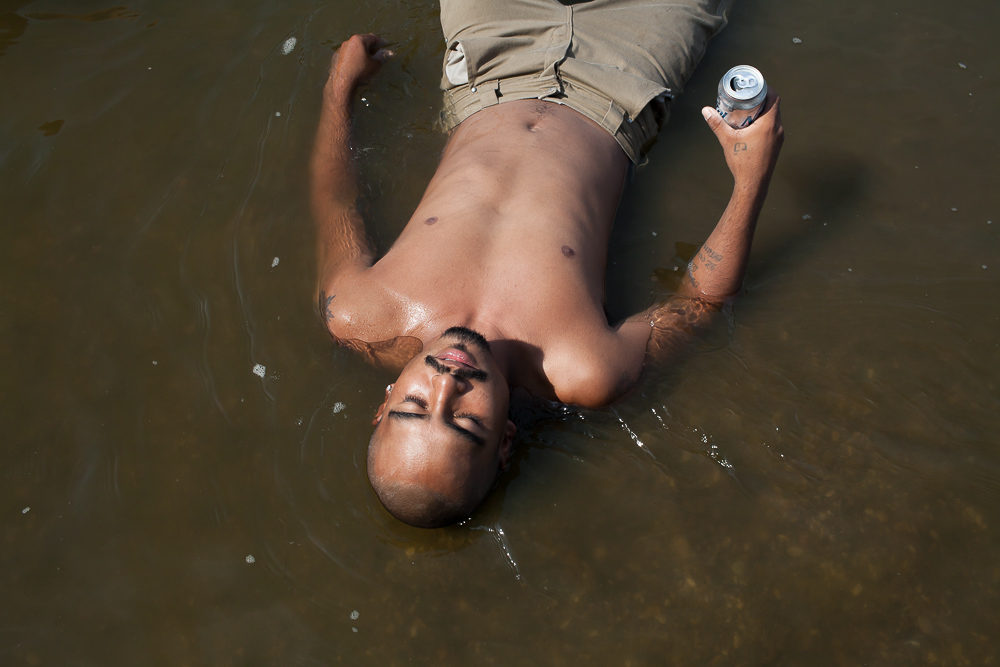 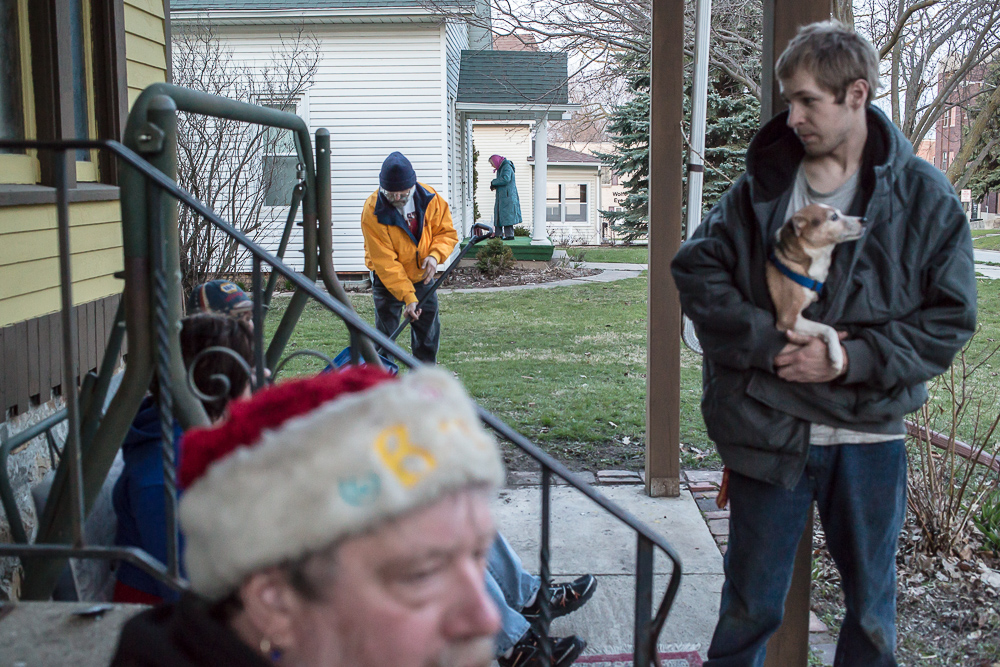 ©Brendan Hoffman, Steve, Mark, and Dustin sit outside the house they live in as an elderly neighbor comes home in the evening on Thursday, April 25, 2013 in Webster City, IA. 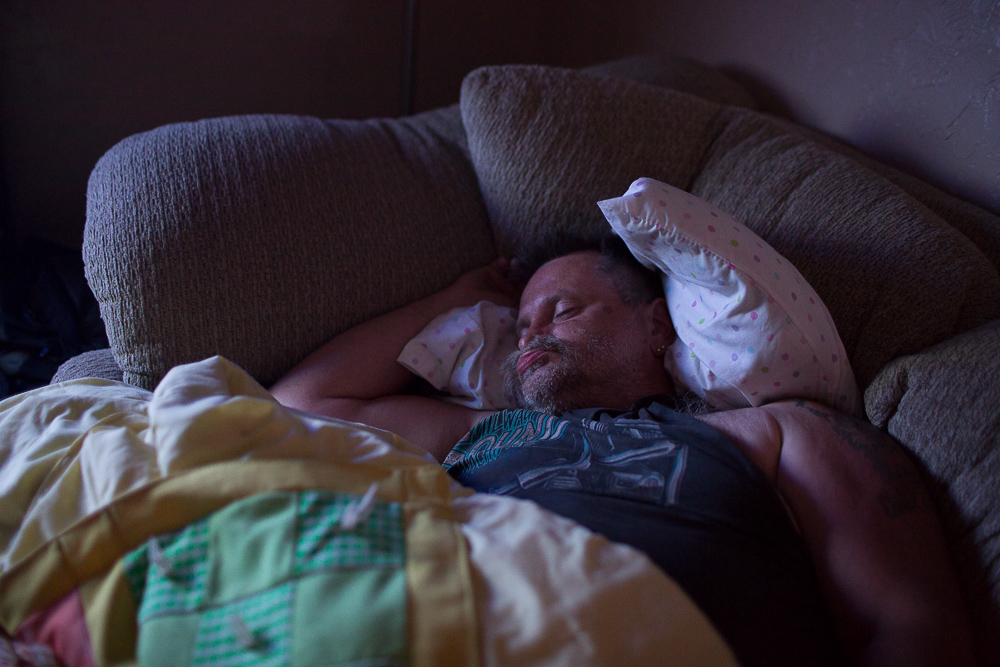 ©Brendan Hoffman, Kevin Reed sleeps on a friend’s couch after being evicted from his apartment on Monday, July 16, 2012 in Webster City, IA. 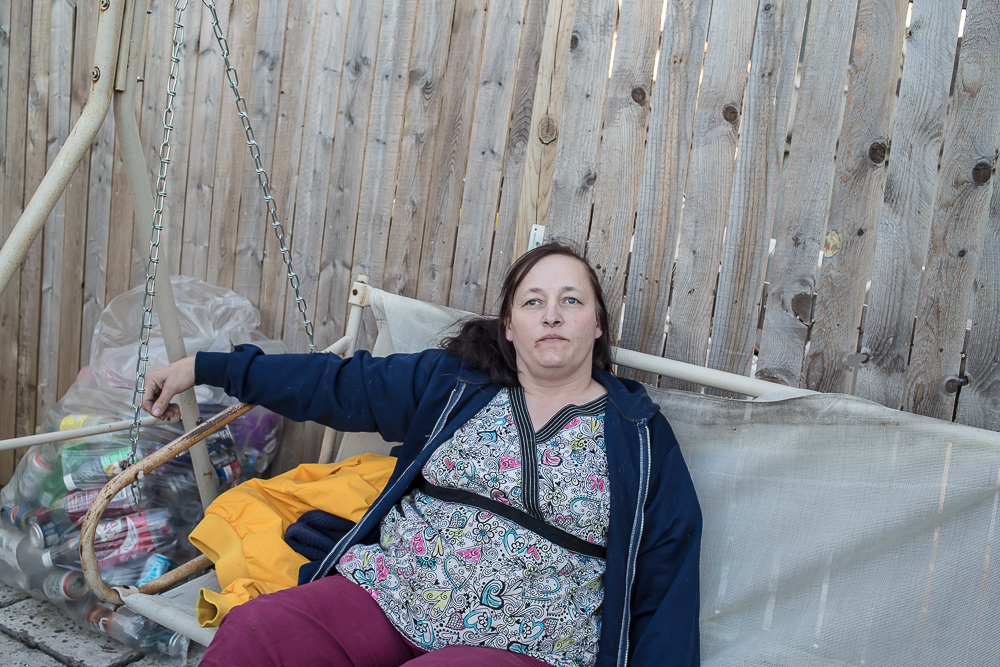 ©Brendan Hoffman, Molly sits on a swing outside her house on Thursday, April 25, 2013 in Webster City, IA. 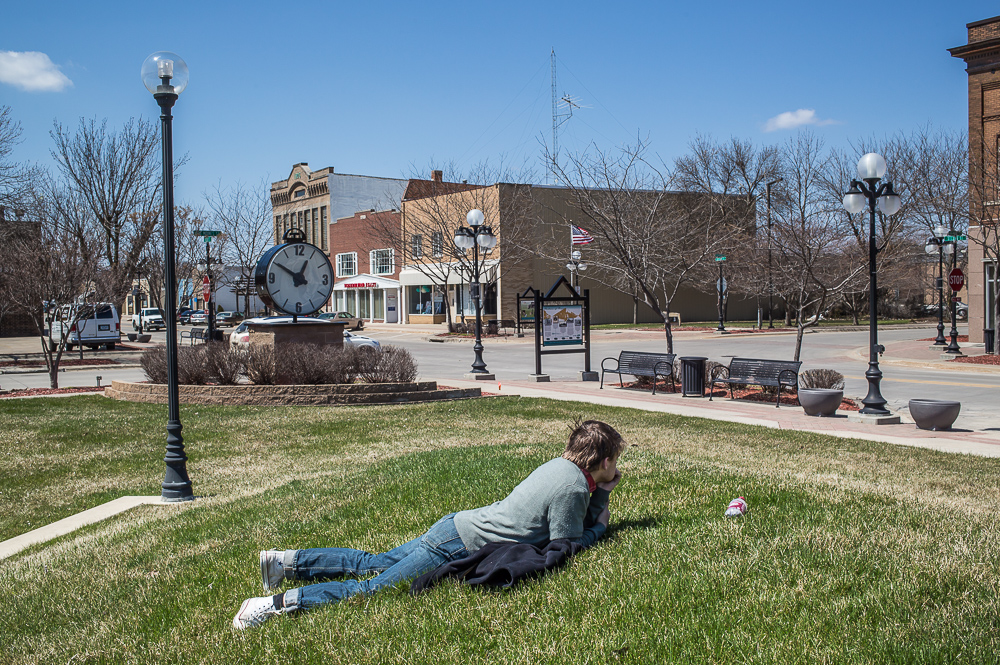 ©Brendan Hoffman, Cody Sleiter, age 17, lays in the grass after being suspended from school on Wednesday, April 24, 2013 in Webster City, IA.

NEXT | Interview with Reid Callanan, Photographer and Educator >
< Jeffrey A. Wolin: Pigeon Hill Portraits: Then and Now | PREV