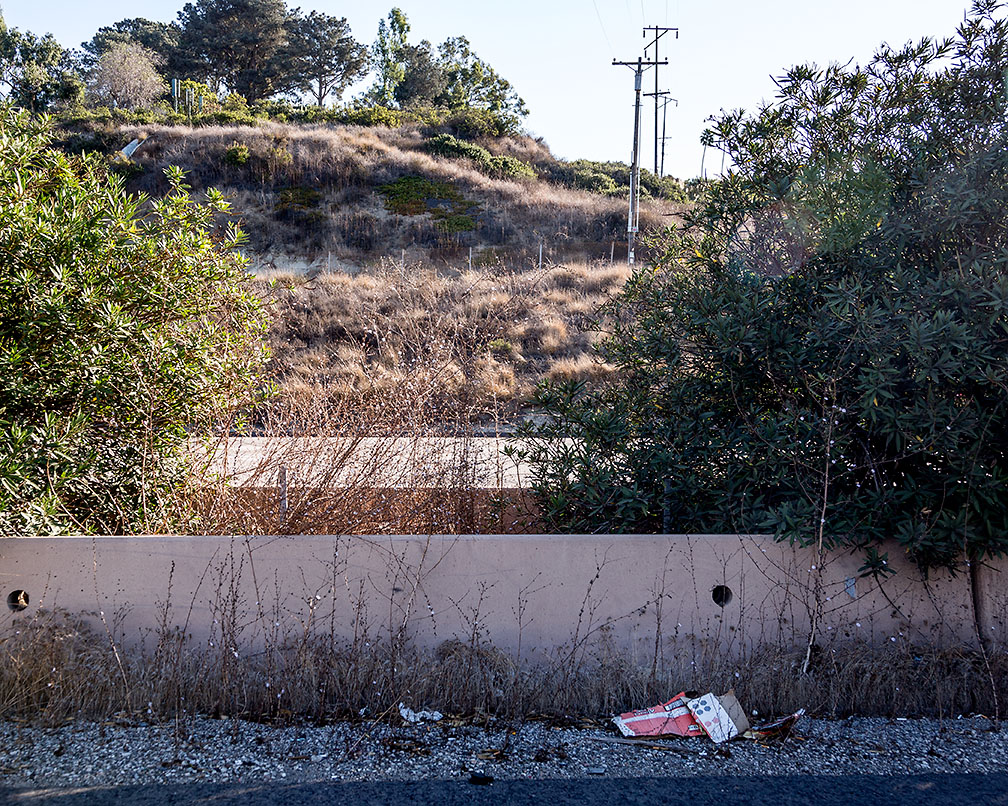 Only in Southern California, where stop-and-go traffic is a daily partner on our travels, does a photographer have the ability to create a body of work while in the car. Photographer, editor, and educator, Douglas Stockdale has a new series and book, Middle Ground/En Medio Tierra, where he uses the unappealing terrain of freeway barricades as a way to examine relationship between the man made and nature. This seemingly unending slice of concrete brought to mind other barriers that are currently in the news and the idea for a leporello book design came while behind the wheel, echoing the segmented vistas in bumper to bumper traffic.

Douglas is the editor of The PhotoBook Journal and will be teaching a workshop at the Los Angeles Center of Photography in October: Introduction to Photo Book Design. He recently had a solo exhibition of this project at Fabrik Projects Gallery in Los Angeles. 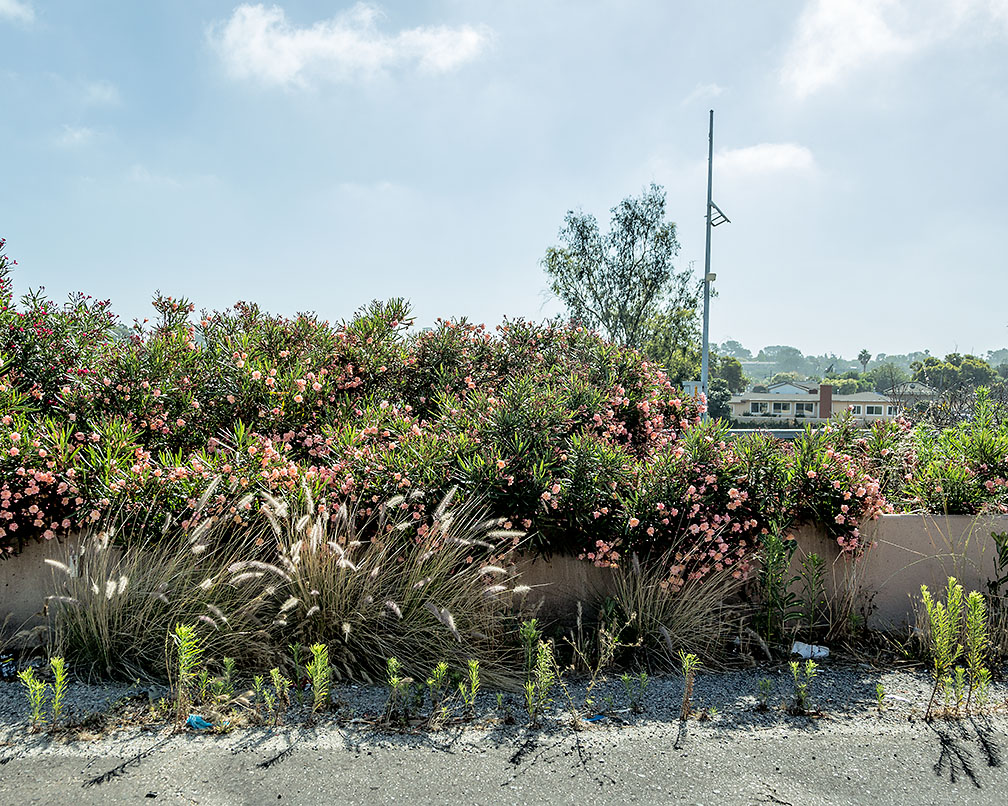 Douglas Stockdale (American) is an artist, book maker, the Editor & founder of The PhotoBook Journal (TPBJ) and on the faculty of Los Angeles Center of Photography (LACP). Stockdale’s artistic projects and books investigate various aspects of memory, family and culture and primarily utilizes the photographic medium in his artistic practice.

His work has been published by Edizioni Punctum (Rome), Fabrik Press (Los Angeles) and has self-published five books, three of which are artist books, of which two were recognized Best Photography Books of the Year (2017, 2014). He curated/juried exhibitions for Photo Independent (L.A.), Fotografia Internazionale di Roma, (Italy), 10×10 Photobooks (NYC/Japan), FotoBookFestival Kassel (Germany) and was a guest curator for LA Photo Curator (L.A.).

Stockdale is in the permanent collections of Museo d’Arte Contemporanea di Roma (Rome), Reminders Photobook Library (Tokyo), Beinecke Rare Book & Manuscript Library (Yale University, Boston), The Franklin Furnace Archive (Brooklyn) and the School of Visual Arts (NYC). He has been featured in LensWork, photo-eye, Silvershotz, New Landscape Photography, Lenscratch and Looking at Photographs, among others. His artwork has been in solo and group exhibitions and he is represented by Farbrik Projects gallery, Los Angeles. 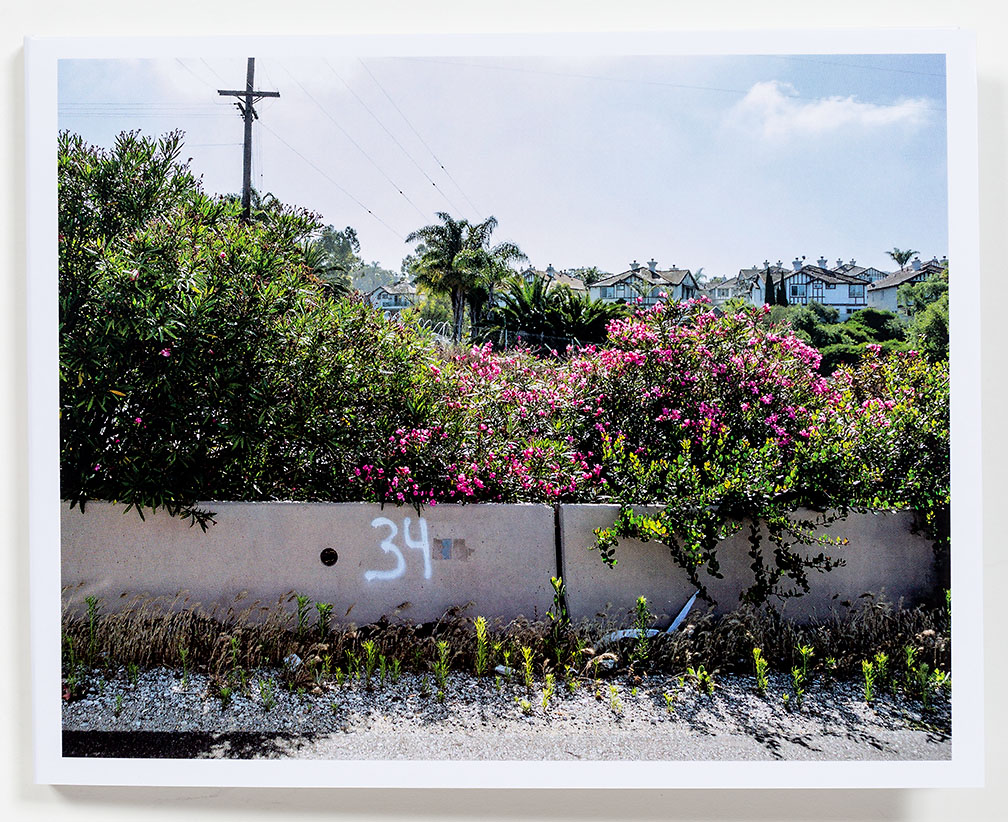 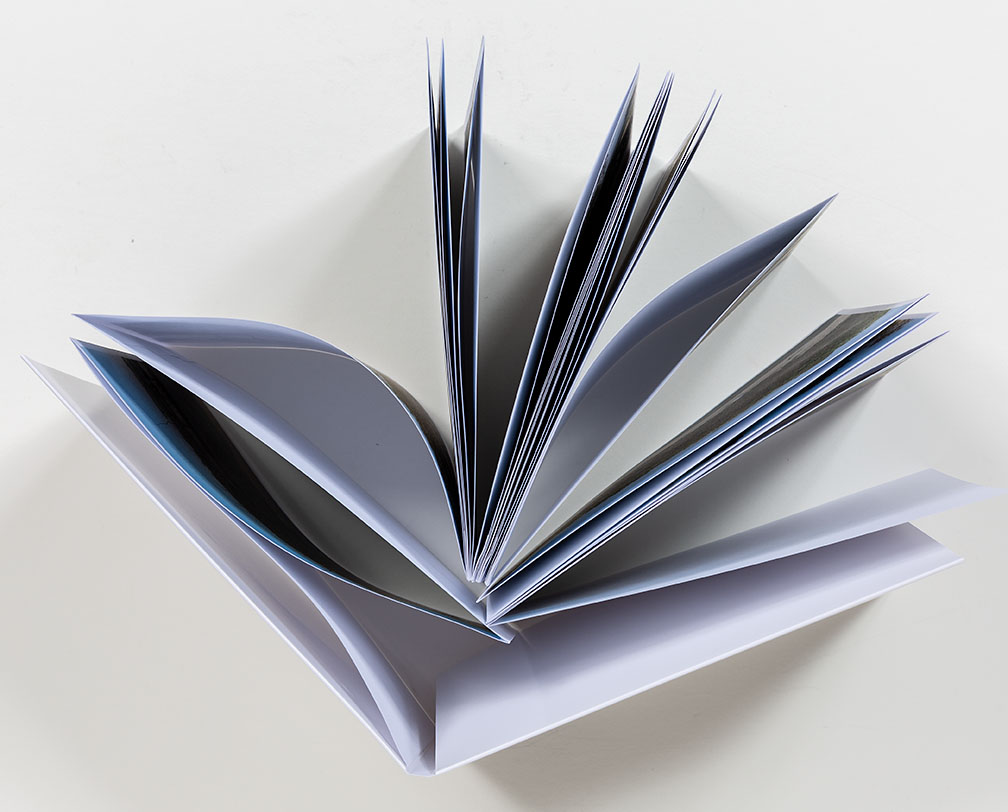 My urban landscape project Middle Ground evolved out my attempts to make some Lemonade. Perhaps not literally. I was commuting from Orange County to San Diego driving south on Interstate-5 freeway and frequently ensnarled in bumper to bumper traffic in North San Diego for a least a half hour of my trip. That part of my commute was a real lemon experience, a stop-n-go traffic condition that left a bitter and unpleasant taste. As part of my artistic practice that I call experimentation/play, I began to use my mobile phone to photograph the adjacent freeway landscape each time I came to a complete stop in traffic as an attempt to create something fun out of an event that was anything but.

As a result of taking the photographs, I was now seeing with clarity an urban landscape that is unique to this section of Interstate-5 as it traverses part of San Diego County. This is a man-built landscape that is usually experienced at speeds of 65+mph while being singularly transfixed on the tail lights of the speeding cars and trucks in front. I quickly came to realize that although San Diego County had planted an extensive landscape barrier between the northbound and southbound freeway to act as a beautiful boundary that over time, this barrier wall had evolved. What I saw was a mash-up of beauty and desolation with an undercurrent of detritus and neglect. A serendipitous element of chance in this project is that I had little control over when the traffic would come to a complete stop to briefly reveal the adjacent landscape. 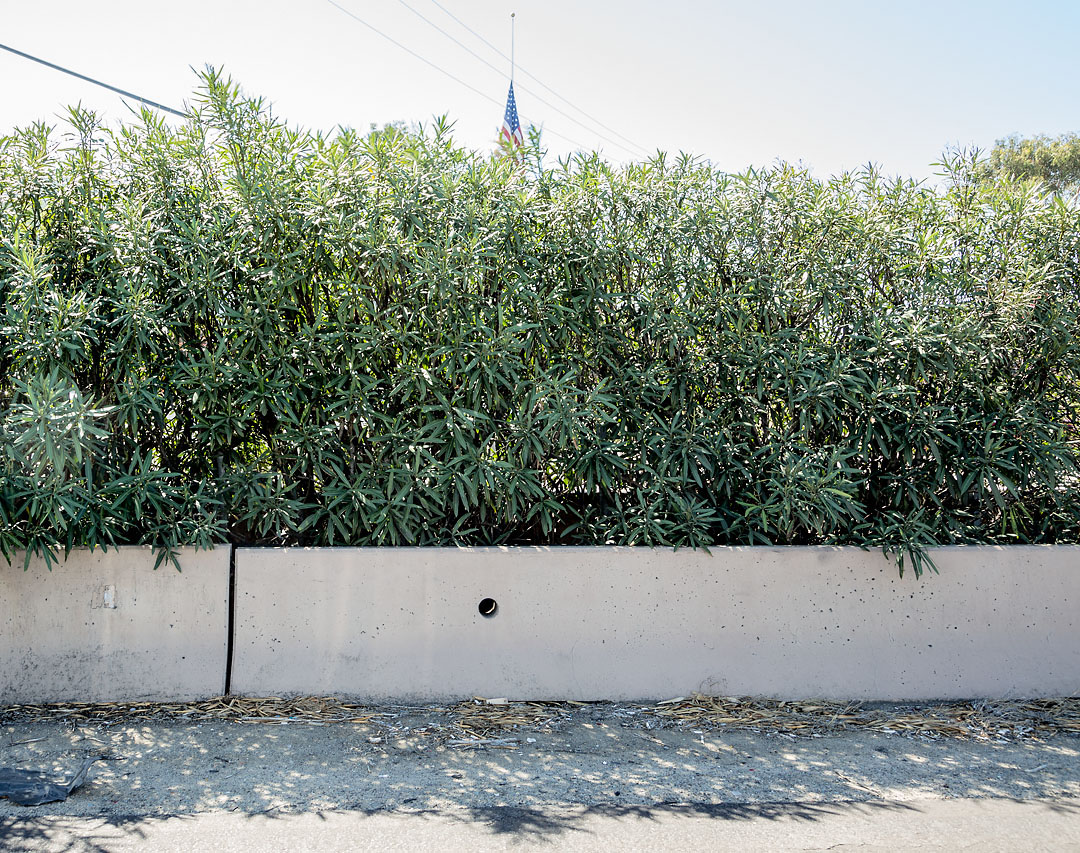 Intrigued by what I was capturing, I made a decision to upgrade my investigation of this unique landscape to the use a full frame DSLR, with the lens focal length set at the approximate wide angle view of my mobile phone. I had shifted into the next phase of the development of this project.

With my cognitive shift I started investigating the elements of the morning light, which shaped the landscape masses while revealing tantalizing details that had gone unnoticed before. Likewise I found myself drawn to the layers of this urban landscape; the foreground k-rail (Jersey Wall) and vegetation, a mix of planned bushes and wild weeds, the opposing traffic that could be brief seen and heard, the adjacent homes and businesses in close proximity to this roadway as well as how the landscape extended beyond. I also began to notice the mysterious gaps in this barrier landscaping, various marks on the barrier walls and the occasional numbers painted on the concrete.

While the project began to evolve I pre-visualized the potential photobook for this project; a leporello book design that would extend out to simulate this barrier wall, which both a K-rail and this book interior extend 21 feet. Another element were adjustments to the composition of each photograph in order that the top line of concrete barrier would create a continuous line though out the book. 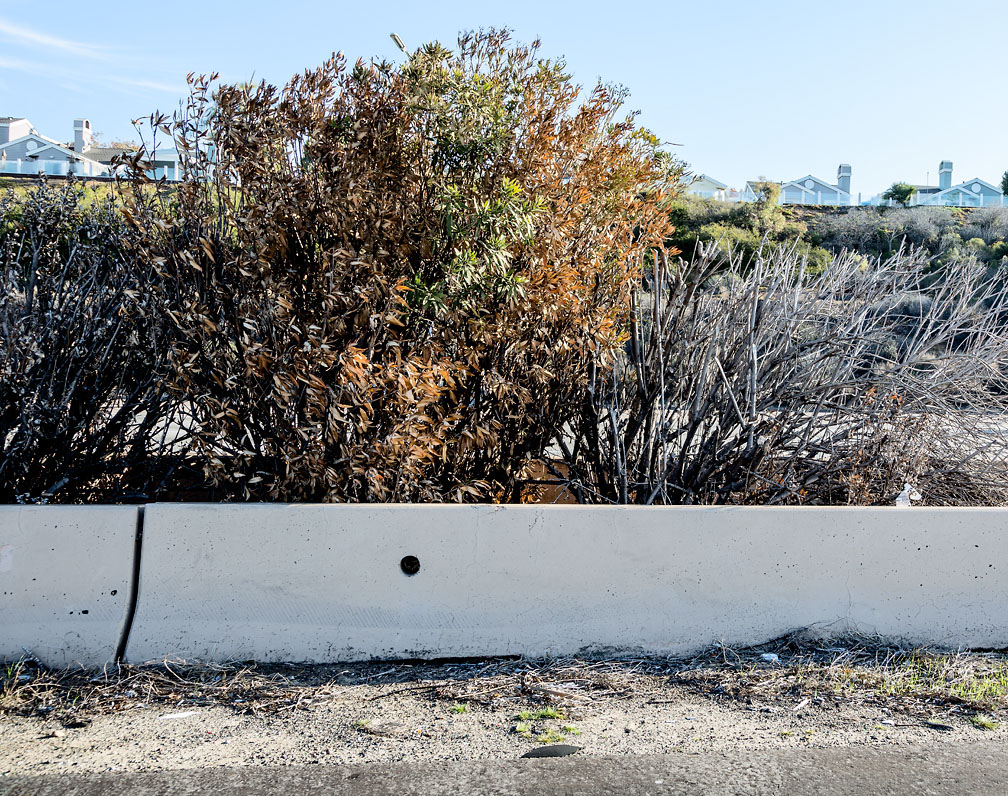 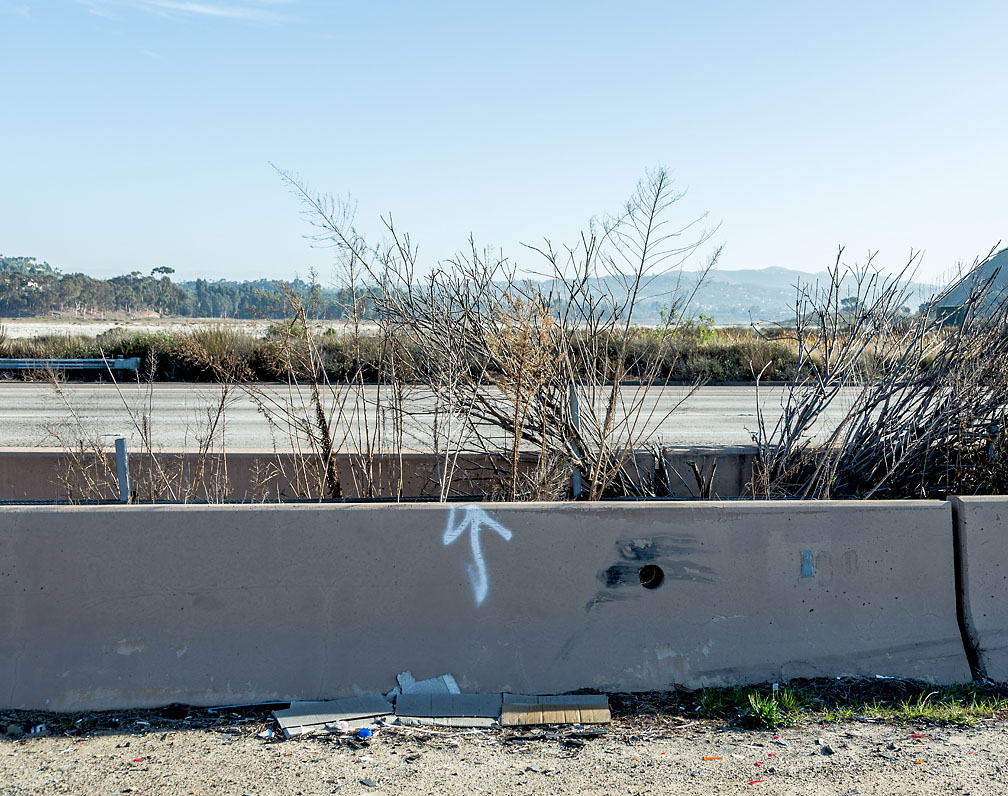 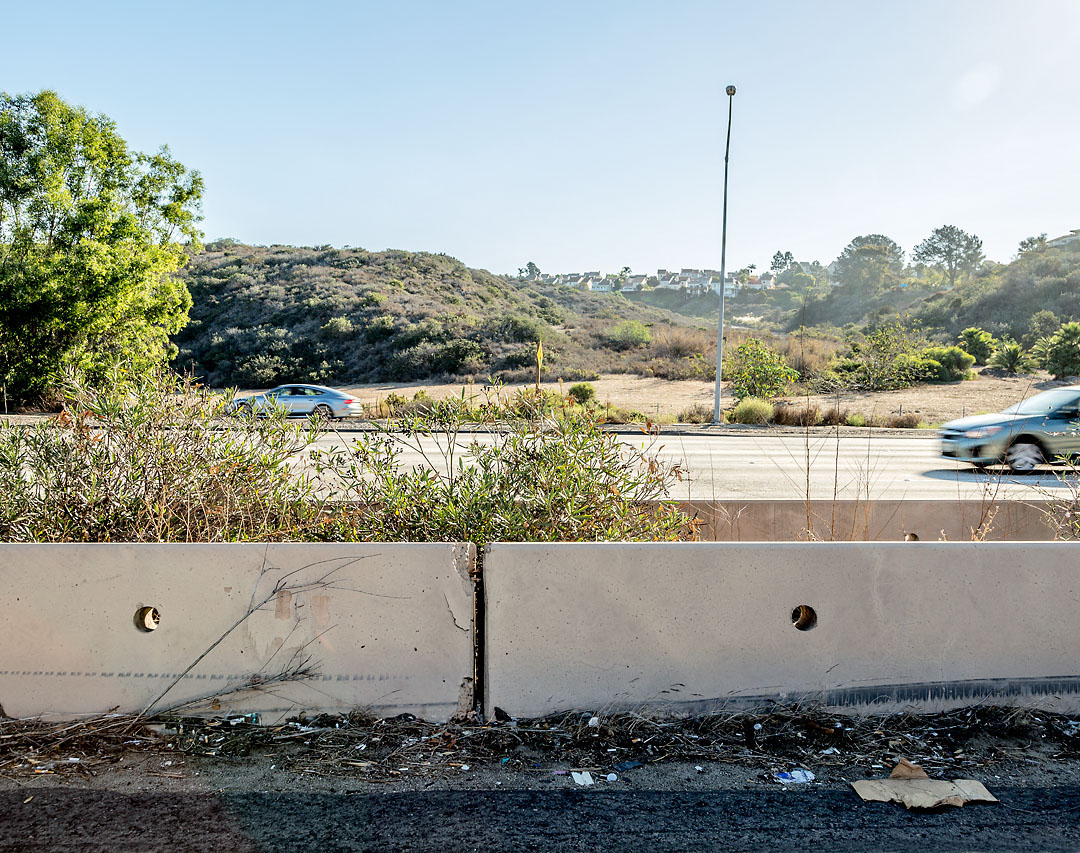 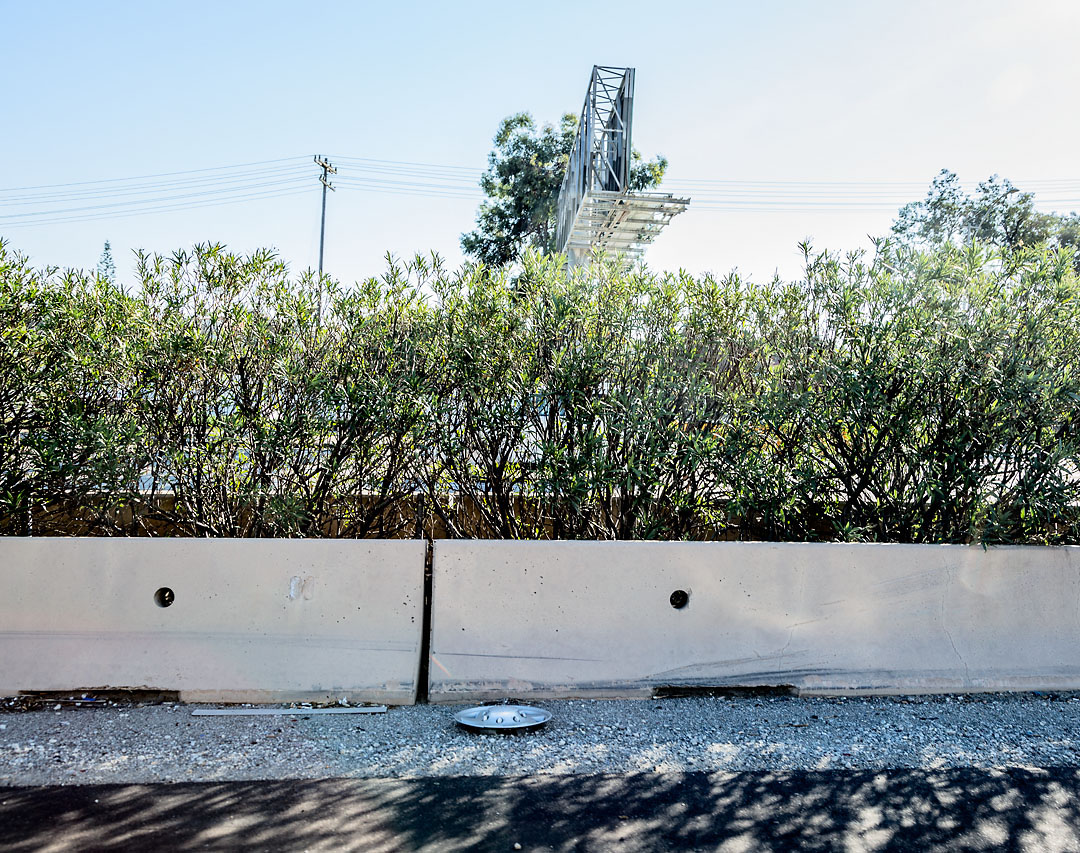 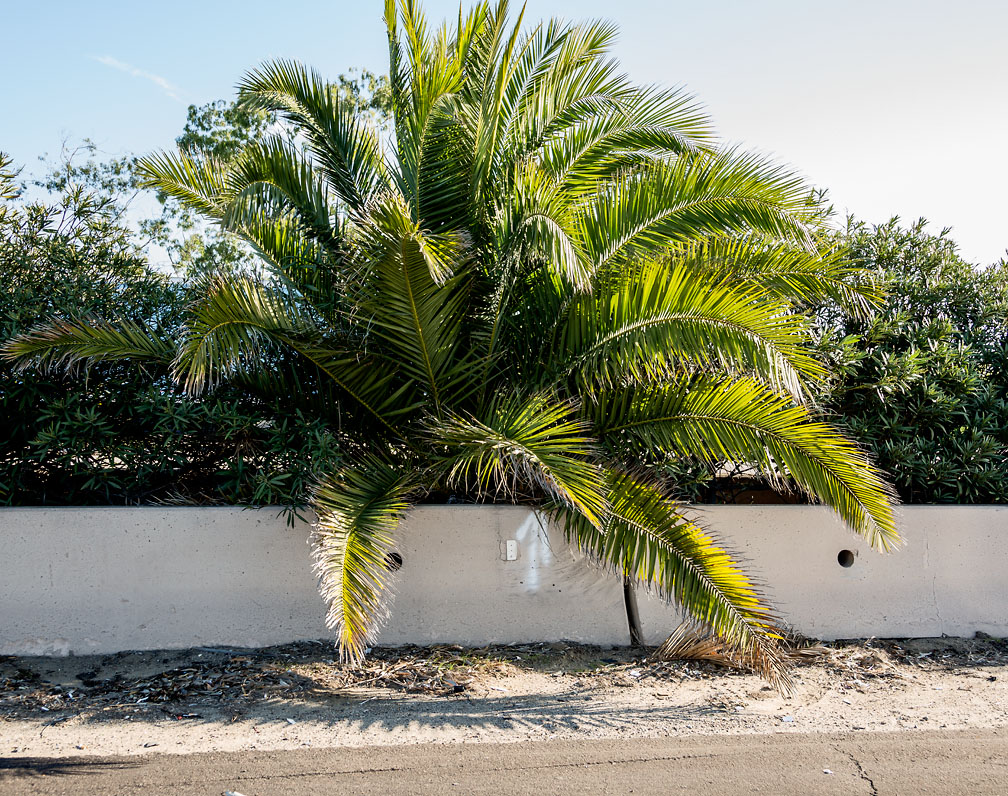 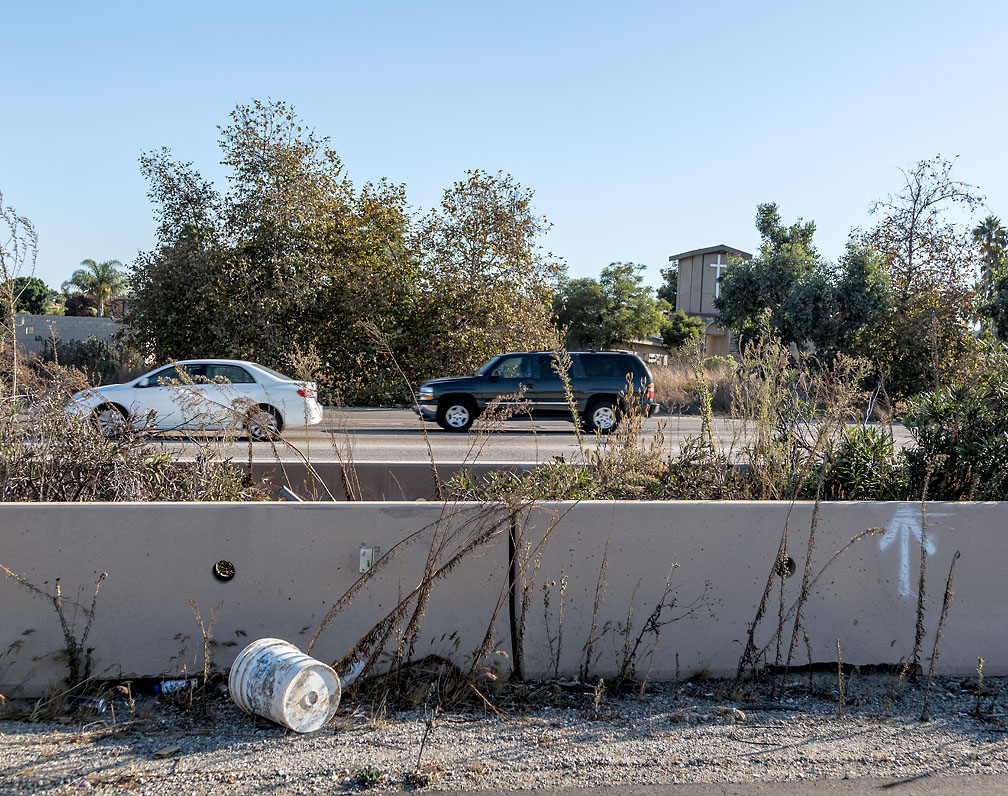 NEXT | Amanda Marchand: The Book of Hours and True North >
< Blue Mitchell: Chasing the Afterglow, Of Salt and Earth | PREV