Now You See Me at Foto Relevance // Tommy Kha by Erica CheungOctober 28, 2020 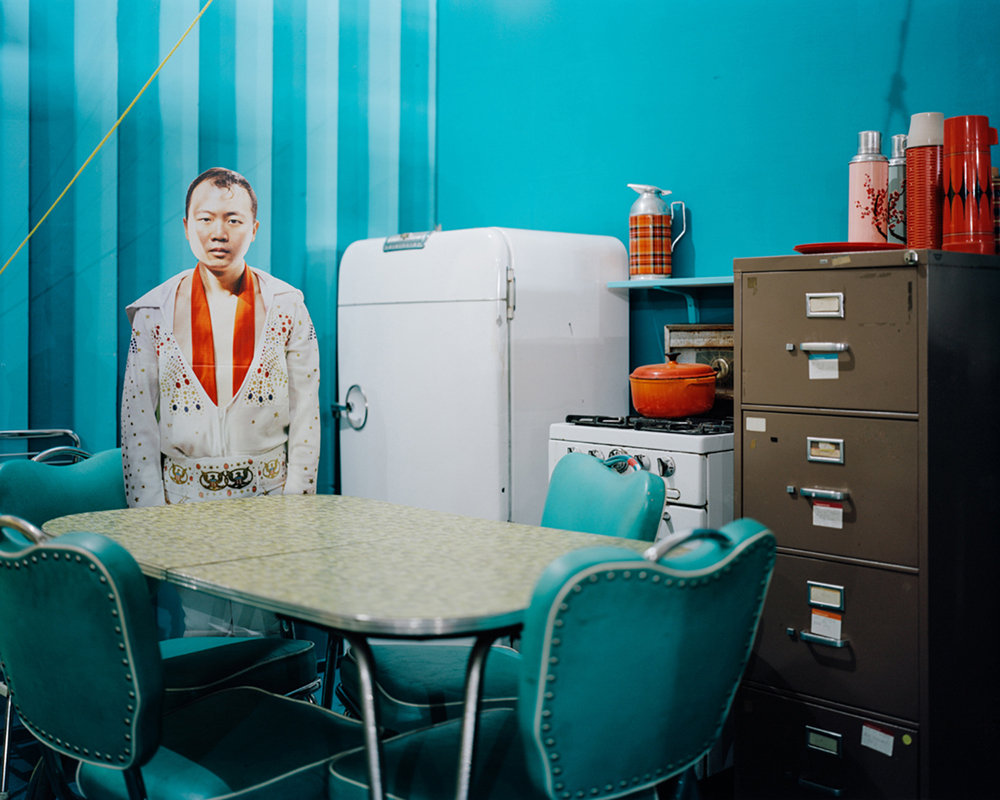 This week, I’m honored to feature six artists who I had the privilege of curating into the group show Now You See Me at Foto Relevance, in an effort to offer a glimpse into the vast complexity and nuance of Asian America. While diverse in their image-making, the artists share a common thread: an urge to be seen and recognized through personal narratives put forth on one’s own terms. As viewers, the intricacies and variations in these narratives help us resist a monolithic interpretation of what being ‘Asian American’ signifies, stretching the term beyond its colloquial, demographic meaning (American citizens of Asian descent) and into a realm that pays homage to its activist roots. In 1968, a group of students at UC Berkeley—many who were influenced by and stood with the Third World Liberation Front, the Black Power movement, and the anti-Vietnam War movement—coined the phrase ‘Asian American’ as an iconic act of political self-determination. As the activist Chris Iijima said, “It was less a marker for what one was and more for what one believed.”

The exhibition is up at Foto Relevance through November 13th, but I hope you’ll join me in celebrating the artists and their stories for a long while to come. – Erica Cheung

Today, I turn to Tommy Kha, whose imagery employs a whimsical and humorous attitude as it muses over the complex angles and intersections of his identity: Asian American, queer, and raised in the American South. Using various cardboard cutouts and masks bearing the likeness of his face, Kha magically creates self-portraits without ever turning the camera on himself. The ubiquity of the artist’s face turns his appearance into a kind of visual motif, leaving viewers to search for and rely on it as an anchor point tying one work to the next. In this clever and absurd way, Kha ensures that he is distinctly visible in a manner that only he controls—something that is often not afforded to those at the crossroads of his communities.

I find myself perpetually delighted and perplexed by Kha’s works. The artist and his likeness are not offering up any clues as to why they keep turning up in so many different, nondescript, intimate spaces—but who are we to demand answers? An interview follows. 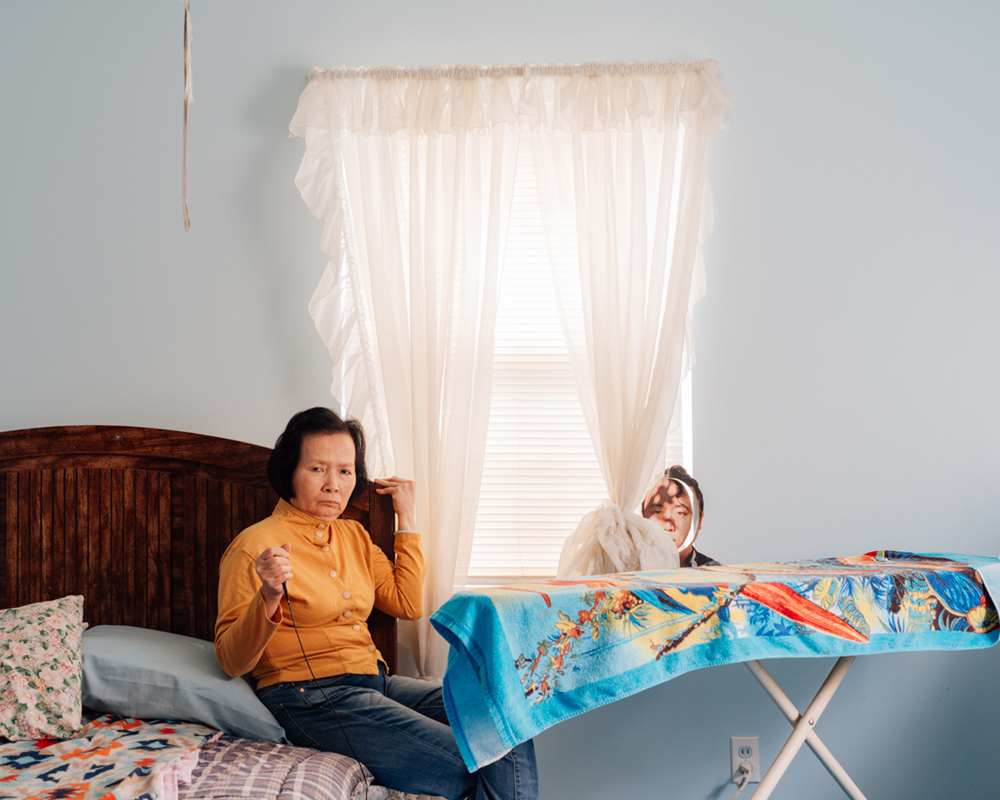 His upcoming book, Return to Sender, will be released in 2021. He appeared in Laurie Simmons’ narrative feature, My Art. His work was the cover of Vice Magazine’s 2017 Photography Issue. He currently teaches photography at the New School.

His first solo show occurred at Blue Sky Gallery in Portland, Oregon, which was followed by his New York solo debut at the Camera Club of New York in May 2019. 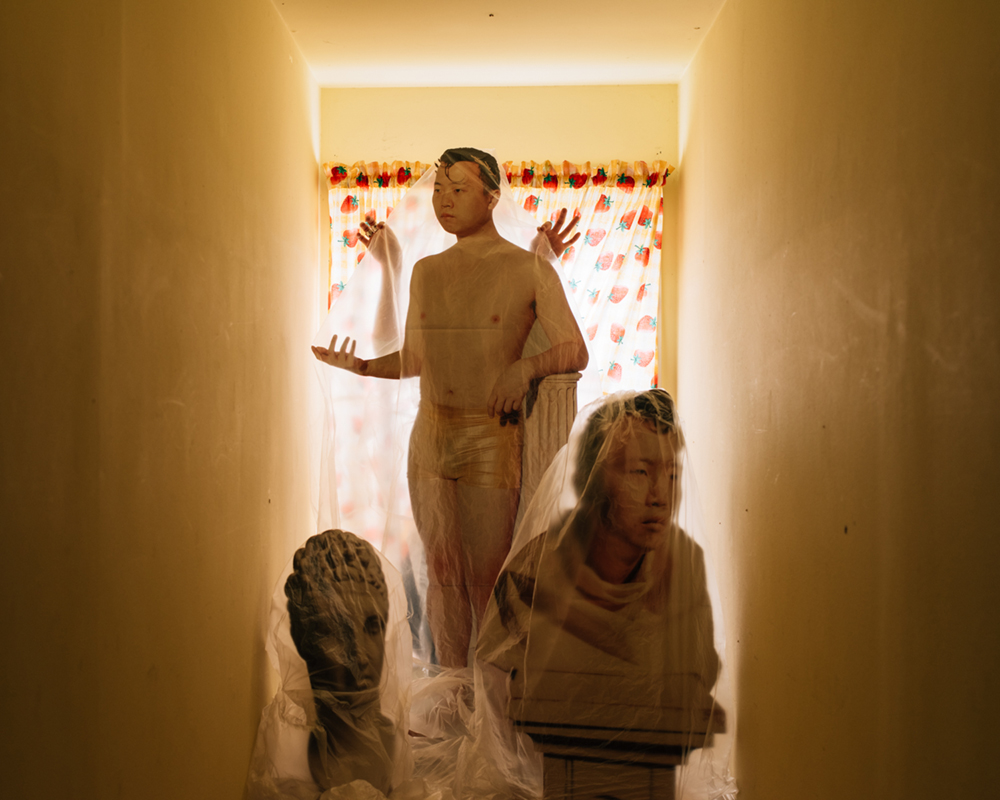 Thank you so much for taking the time to interview with me/Lenscratch! How have you been doing as of late? Where are you writing us from?

Day by day, I find it getting a bit difficult to articulate how to answer that. That said, I’m writing from Greenpoint, Brooklyn.

How did you come to include photography in your art practice? Why photography?

I’m after my mother’s generation, where photography was used as a documentary instrument for celebrations, gatherings, as well as her own self-portraits, all which were shaped by survival and war. This inflection resonates differently in my own hand—I arrived at photography around the same time I realized I was queer. My picture making is cartography, mapping the impressions in the landscape, or rather, attempting to locate an unfixed identity informed by race, sexuality, and place. 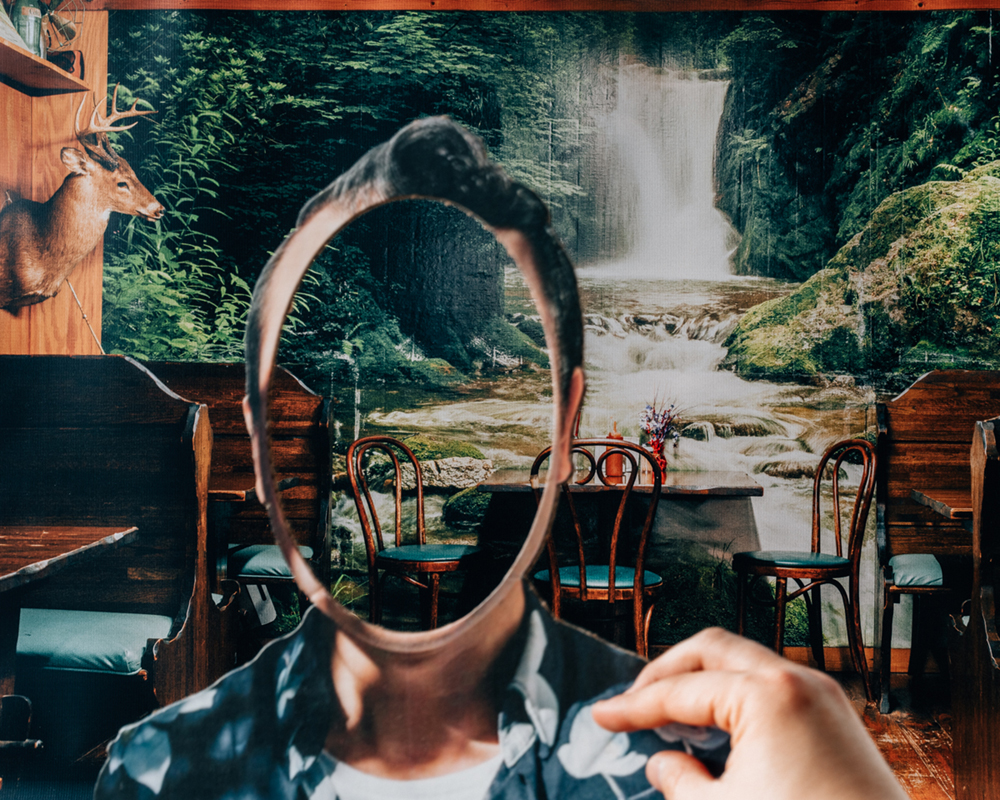 My curation of Now You See Me at Foto Relevance is an effort to call attention to Asian American voices. What does the label ‘Asian American’ mean to you, and what does it mean for your art practice?

“Asian American” is almost an oxymoron to me. “Anything” plus “American” is a coded way to say “perpetual foreigner” because to be just American is often inferring to whiteness. Though I have a Southern accent, superficially, I look Asian. I remember multiple times being told to speak “American” in a place I was from.

I enjoy this state of in-betweenness because I rather be difficult to place. I hope to be pleasant nightmare for art criminologists. Reflected somewhat in my practice, I tend to continuously change materials and approaches, developing the connection between disparate notions while reflecting back to the nature of photography. Photographic technology is always evolving but we can recognize certain images as photography. And within the canon, the photograph’s role in viewing otherness, what is not photographed or how one is positioned within the picture depended on who wielded the camera. 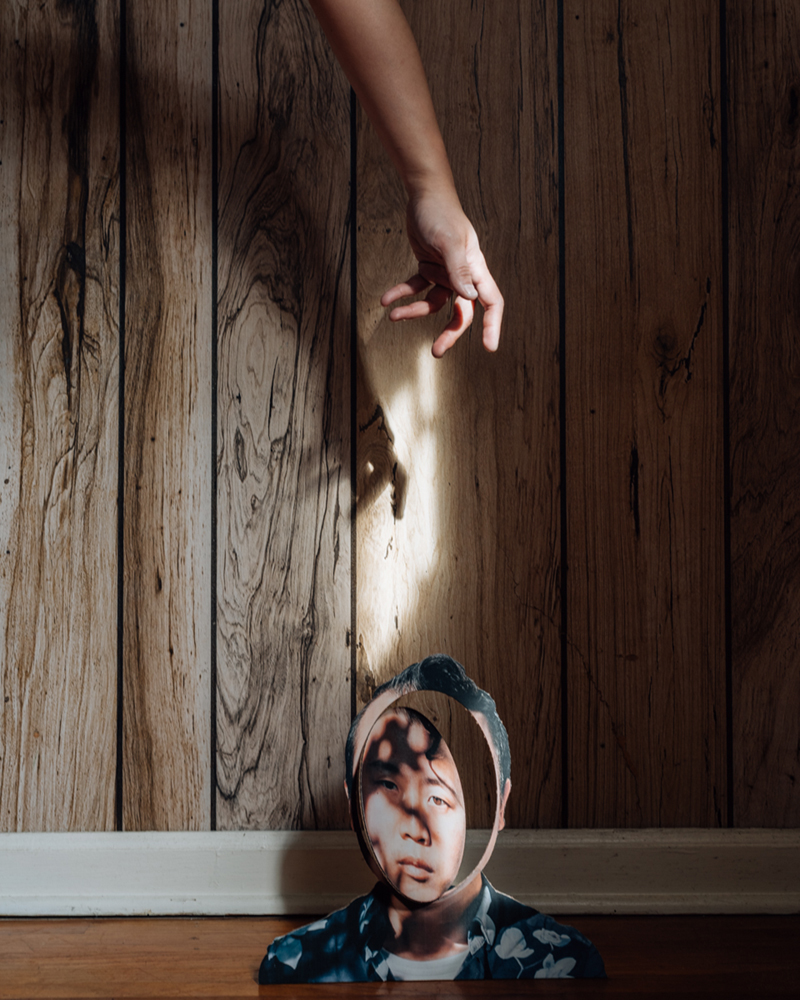 How do other facets of your identity gel with, conflict with, and generally intersect with your Asian American-ness (if at all)? Do these additional identity markers influence the way you approach your work and/or the world at large?

Being a queer photographer of color from the American South, there is an internal struggle to have them cohere but lately, it’s really finding solace at them being at odds with one another. It has echoed in my work where I have tried to focus on one or the other, but there is a danger to repeating photographic gestures in framing something out. I’m more interested how easily truth, which can mean the thing represented and photographic, can be dislocated across the boards. Whether it is identity politics, impersonators, performance for the camera, or a landscape, it has continuity based on autobiography.

Your work offers a different kind of self-portraiture from what many of us might be used to seeing. Will you tell us more about the practice of using cardboard cutouts and masks of your face in photographs? How and why did it start? What is it like seeing your face dissociated from your body?

The cutouts and masks are sourced from pictures. It really began when I was still shooting with a 4×5 view camera, I carried an Elvis cardboard standee because I needed something to pull focus on in my place. It was programmed to say a few words, like most men. While I was on residency at Light Work, I developed the materials but didn’t return to it until months later. There is something quite bemusing staring at my old face after opening the mail.

Any ideas stewing for where we might find your face next?

Always. Though, time will tell. 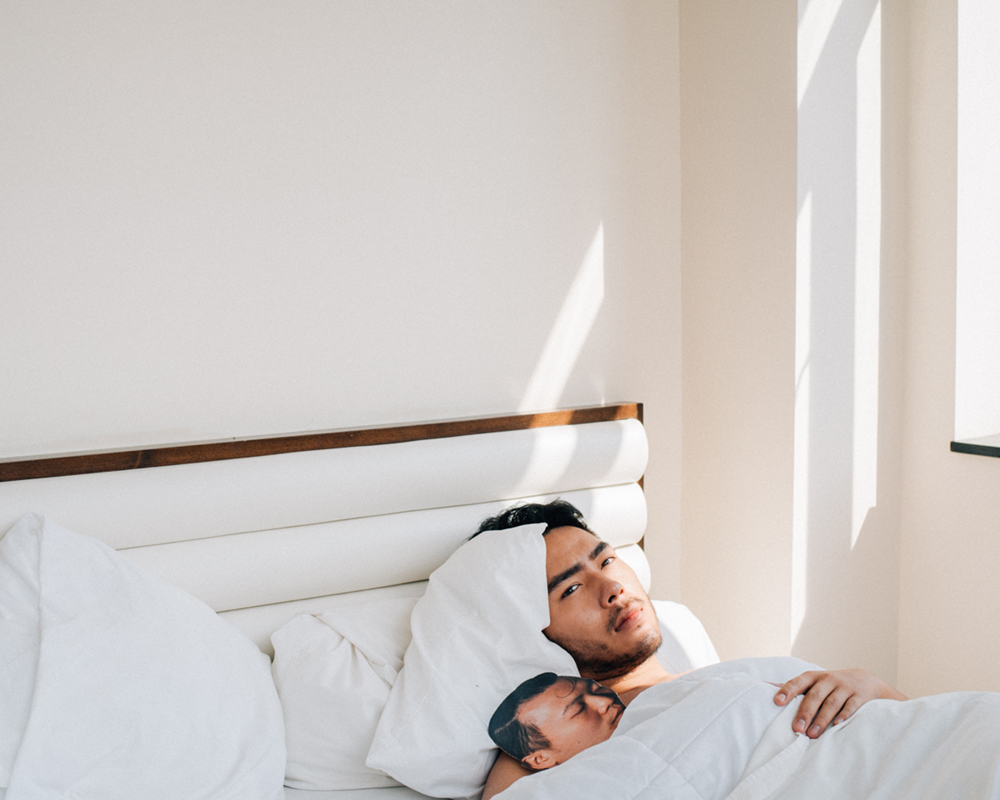 What has been one of your favorite reactions or responses that someone has had to your work?

When I started showing my photographs in Memphis, a woman exclaimed she wanted to throw up after seeing my kissing pictures.

Whose work are you looking at and thinking about (from the Asian diaspora or otherwise, photographic or otherwise)?

Tseng Kwong Chi is a spiritual photographic ancestor. At the moment, I’m researching Tao Li, one of two lovers of Magnus Hirschfeld who founded Institut für Sexualwissenschaft which was destroyed by the Nazis in 1933. This event was depicted in the series Transparent however Tao Li was notably absent. 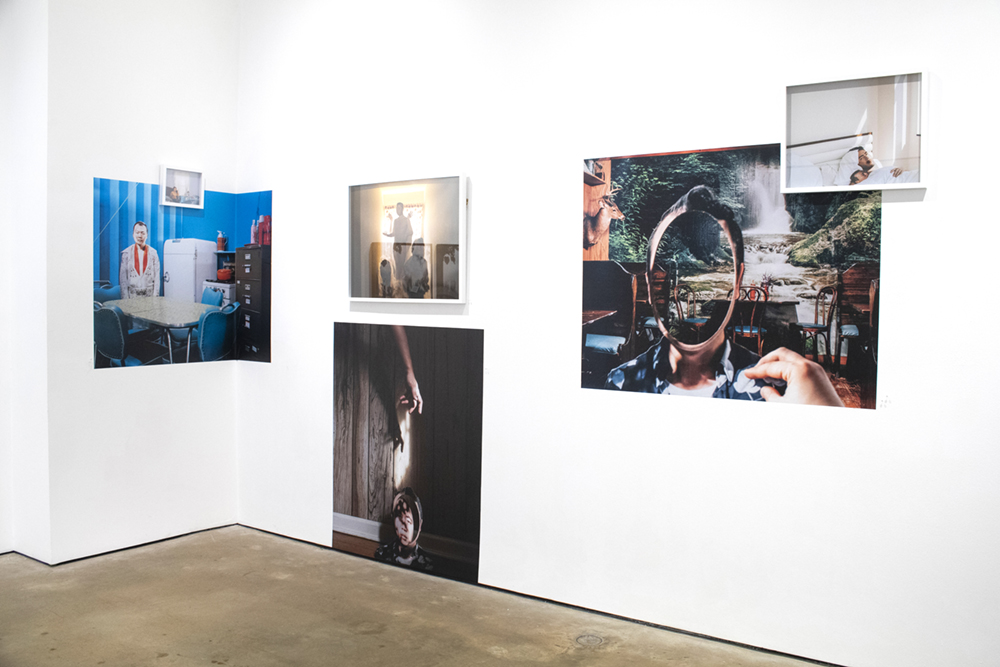 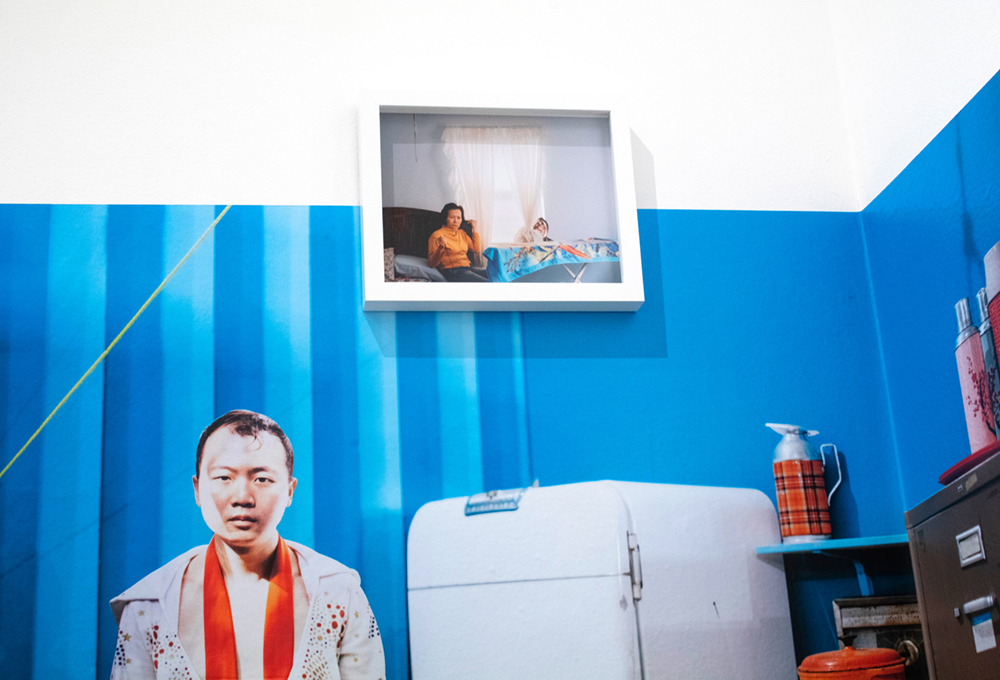 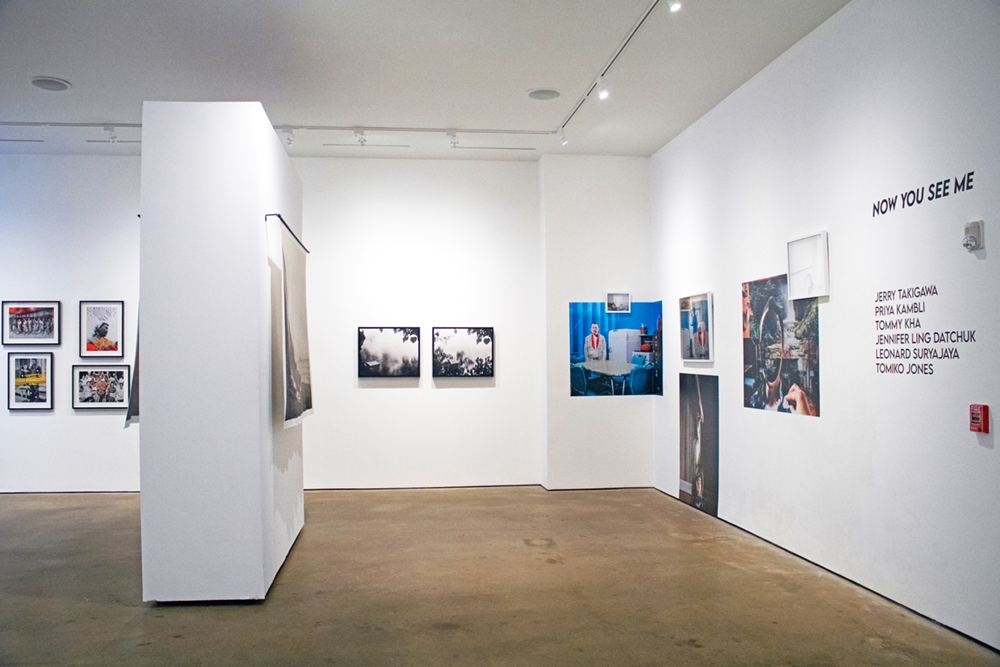 Now You See Me installation view at Foto Relevance