Photographers Giving Back by Aline SmithsonFebruary 21, 2010

Yesterday was a big day for photographers giving back in Los Angeles. In the afternoon, I attended an opening at the Armory in Pasadena of an exhibition by deaf photographers. Eyes of Deafness: Photography by Deaf and Hard of Hearing Adults was organized by Los Angeles photographer, Blair Wells, and supported by the Greater Los Angeles Agency for Deafness. This exhibition focuses on the artwork of deaf and hard of hearing adults who have rarely, if ever, used a camera. Employing disposable cameras (donated by CVS) they set out to capture their personal experiences and expressions, giving them the opportunity to communicate with the world in a manner they had not yet explored. The result of that idea what a fabulous exhibition, catalog, and an opening so filled with excitement, joy, and lots of animated signing. The exhibition is on display from February 20 – March 14. Congratulations to Blair for letting a seed of an idea grow into an incredible garden of expression and validation. 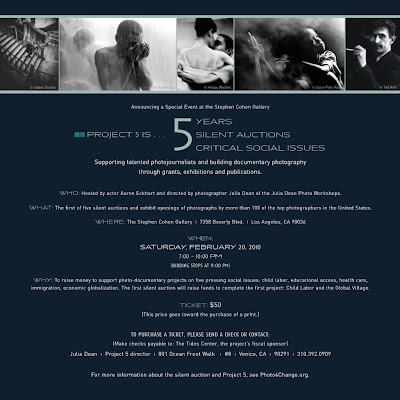 Last night was a gala auction event at the Stephen Cohen Gallery for Project 5: Photography for Social Change, which supports talented photojournalists and builds documentary photography through grants, exhibits and publications. It was an amazing evening full of celebrities, photographers, photo collectors and enthusiasts, and it was made even more meaningful when Chivy Sok, a human rights activist, shared stories of her life, being kidnapped as a child by the khmer Rogue and put into slave labor.

“Photographers look through their lenses at society and the environment, but they also see through their hearts,” says Dean, the Los Angeles documentary photographer who founded Project 5. “As the economy takes a toll on the traditional patrons of documentary photography, such as newspapers and magazines, new support is needed. We must not lose a generation of important stories.”