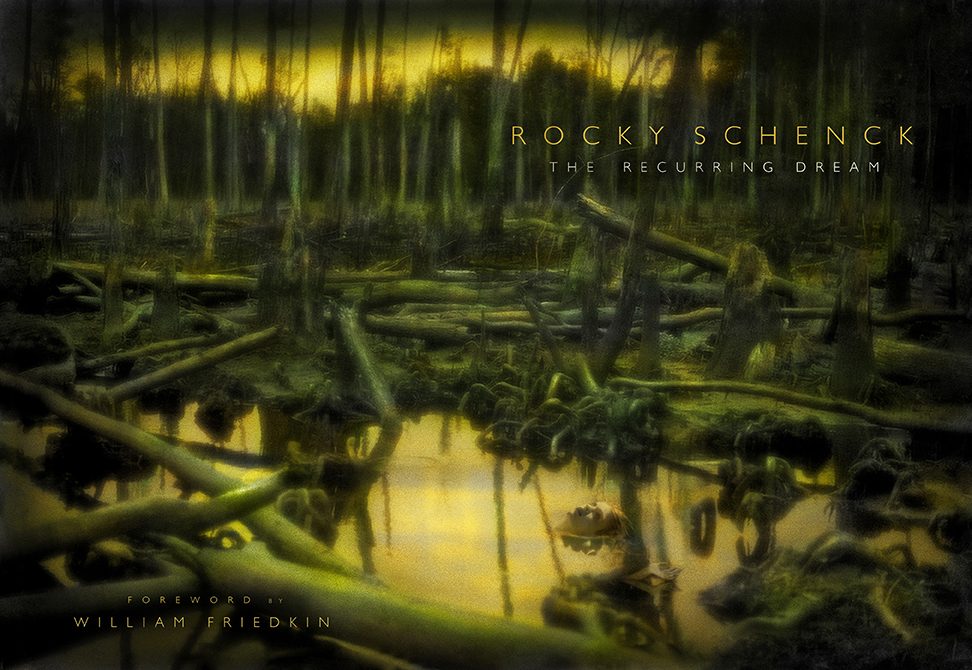 If these pictures by Rocky Schenck are “about” anything, it is mood, atmosphere, and the art of seeing. They demonstrate that mystery is at the heart of existence. The mysteries of birth, death, love, and faith. Their meaning is less important than the pleasure we derive from discovering them … – William Friedkin, Academy Award–winning director, producer, and screenwriter (from the foreword)

“Schenck’s images explore psychological, metaphysical, and pictorial worlds, ranging from suggestive landscapes to scenes of people dwelling in various ‘found realities’ and the occasionally manufactured reality. Inspired by Schenck’s rich dream life, the images insinuate subtle narratives that entice viewers to create stories in their own imaginations. Six of the images in the book feature one of Schenck’s favorite muses, Frances Bean Cobain.”

Rocky Schenck was raised on a ranch outside of Dripping Springs, Texas. At age twelve, he studied painting and began selling his work professionally at age 13. In his early teens, he began writing, directing and photographing experimental short films. His fascination with the art of filmmaking and photography motivated a move to Los Angeles. Artists in the motion picture, musical, literary and theatrical worlds began approaching Schenck for their projects, enabling the artist to create a diverse portfolio of fine art, portraiture, film and theater work. A gallery owner in New York gave Schenck his first one-man photography exhibition, followed by a second exhibition a year later. Both shows were well received and reviewed by several publications, including Art in America, Artforum, and Aperture. Since then, Schenck has continued to show in galleries around the world and his work is included in several prestigious museum and private collections. The Wittliff Collections in San Marcos, Texas owns the largest collection of Schenck’s work. Schenck has also photographed hundreds of album covers and written and directed numerous short films and music videos, working with many talented artists. He lives in Hollywood, California. 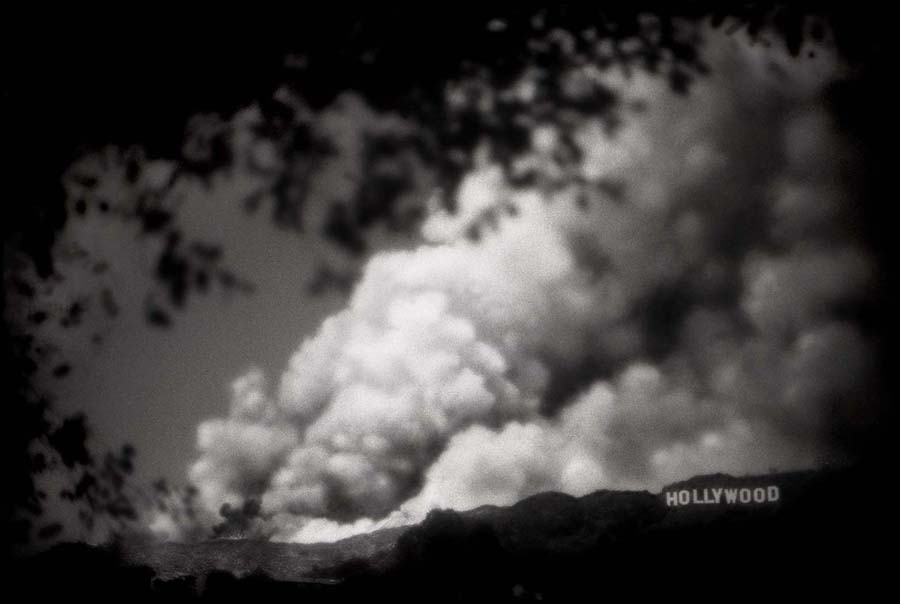 The Recurring Dream includes a foreword by William Friedkin who has used Schenck’s photographs as massive sets in his productions of the operas The Makropulos Affair by Czech composer Leoš Janáček and the Béla Bartók classic Bluebeard’s Castle. Friedkin discusses Schenck’s early artistic influences which include cinematography greats Greg Toland (Citizen Kane) and Karl Freund (Metropolis, Dracula, Camille), painter Edvard Munch, and the early twentieth-century photographer George Seeley. He writes that Schneck’s “technical skills match his imagination. These pictures are as suggestive of painting as they are of photography. To me, they’re reminiscent of Max Ernst and René Magritte but totally original.” 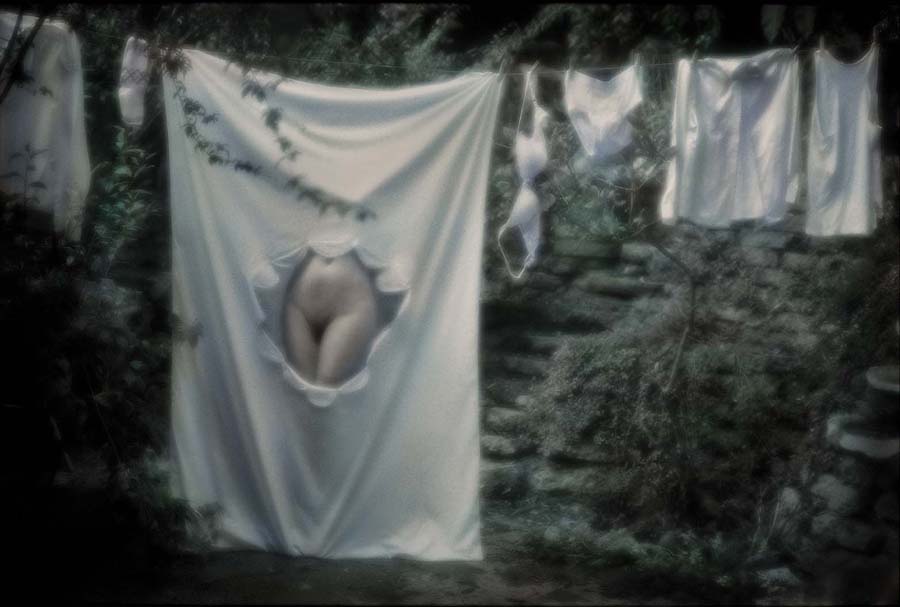 Schenck describes his approach to his art:

I don’t rejoice in the idea of placing my personal demons on parade or of sharing my revelatory, cathartic experiences, my innermost thoughts, or my day-to-day meanderings. Except when it comes to photography … whenever times are rough or I’m straying too far off the road of reality, I turn to my camera and find my clarity, my focus. As long as I am capable of shooting a photograph that illustrates what I am experiencing in my heart, in my emotions, in my delusions and paranoia, and in my dreams, I know everything will be absolutely fine. 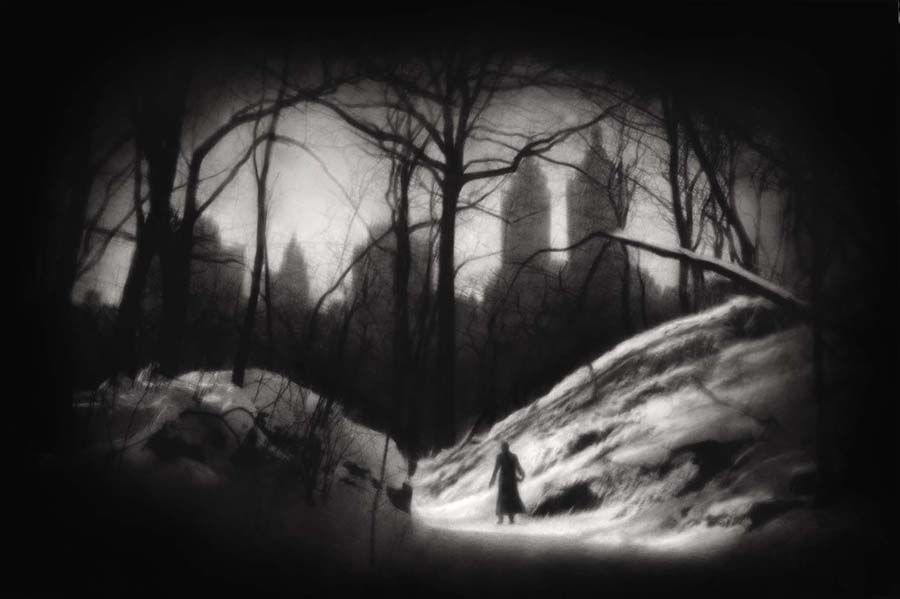 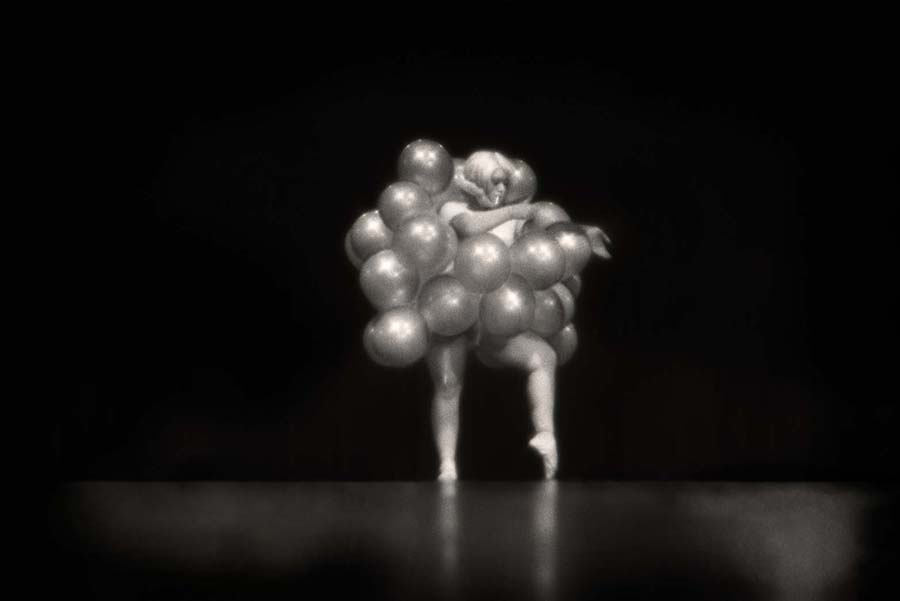 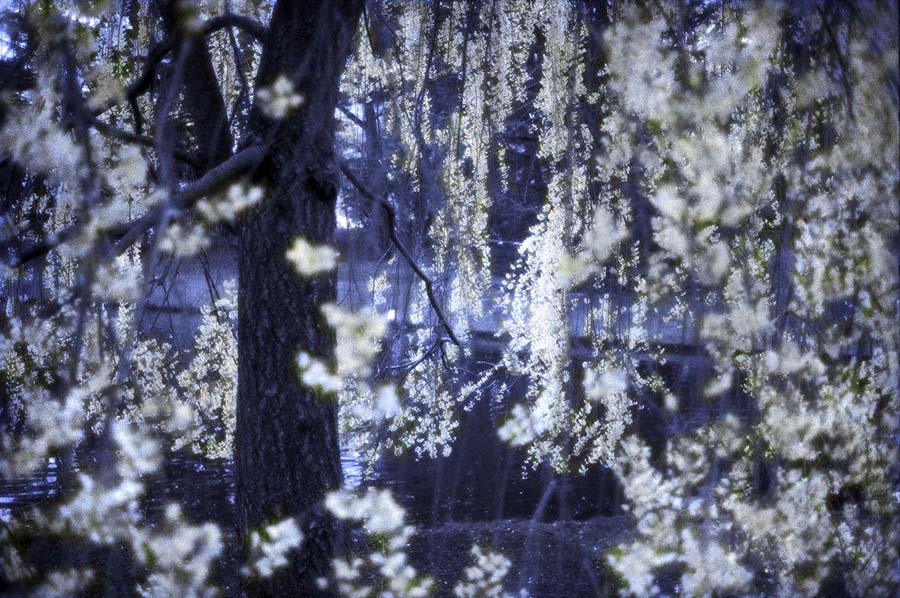 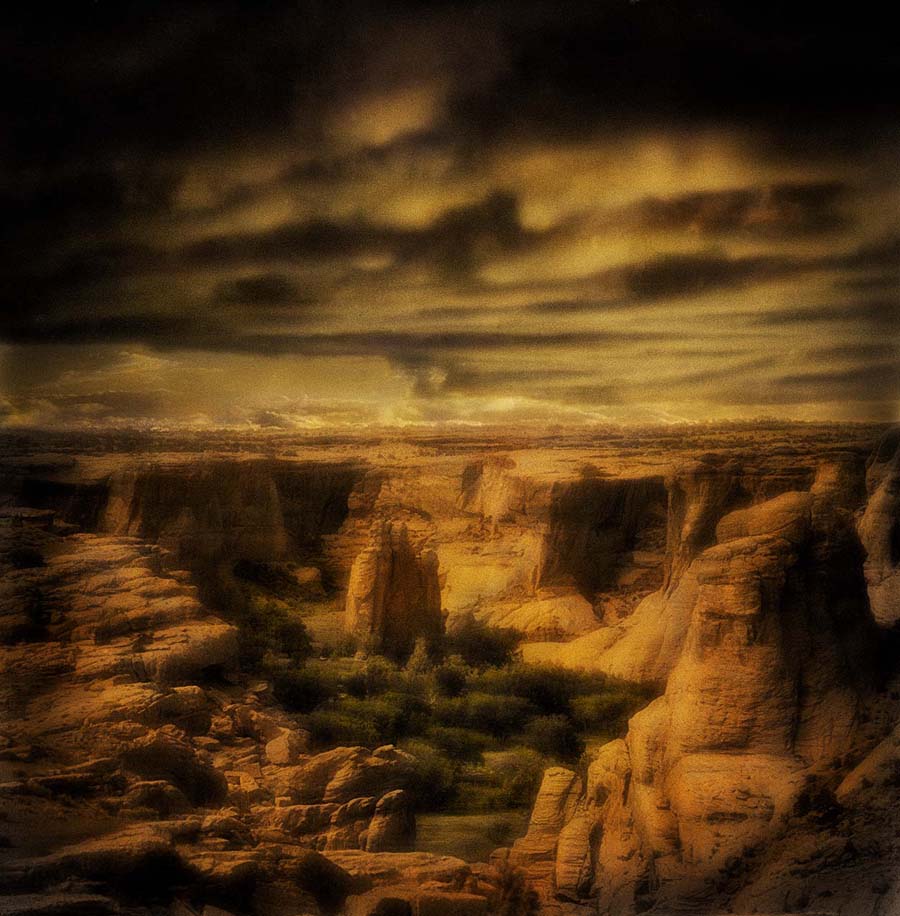 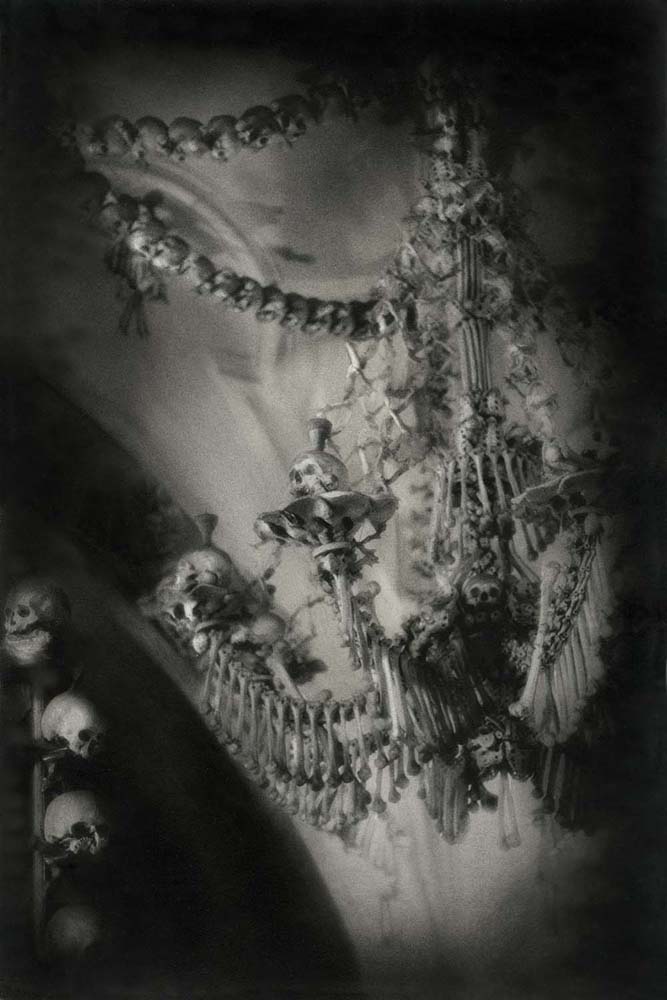 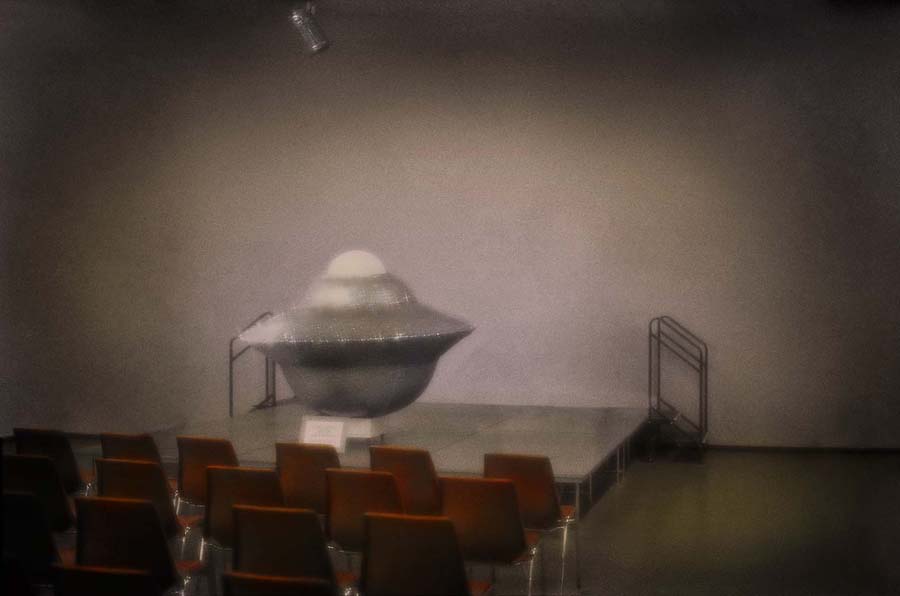 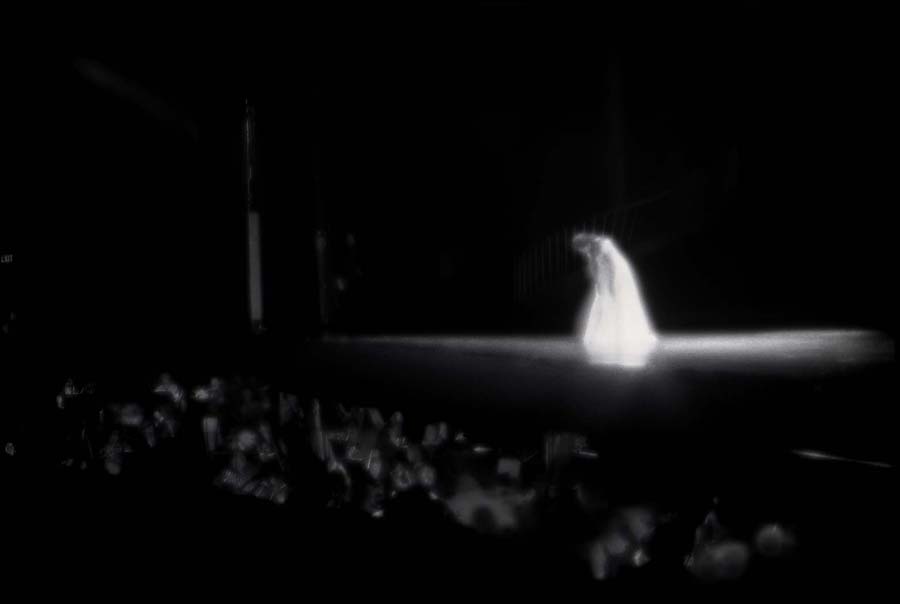 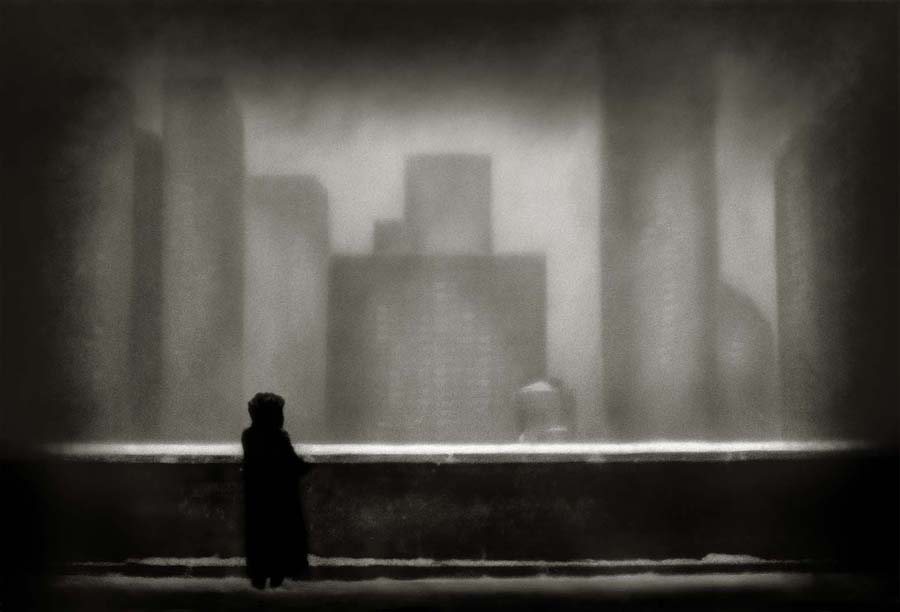 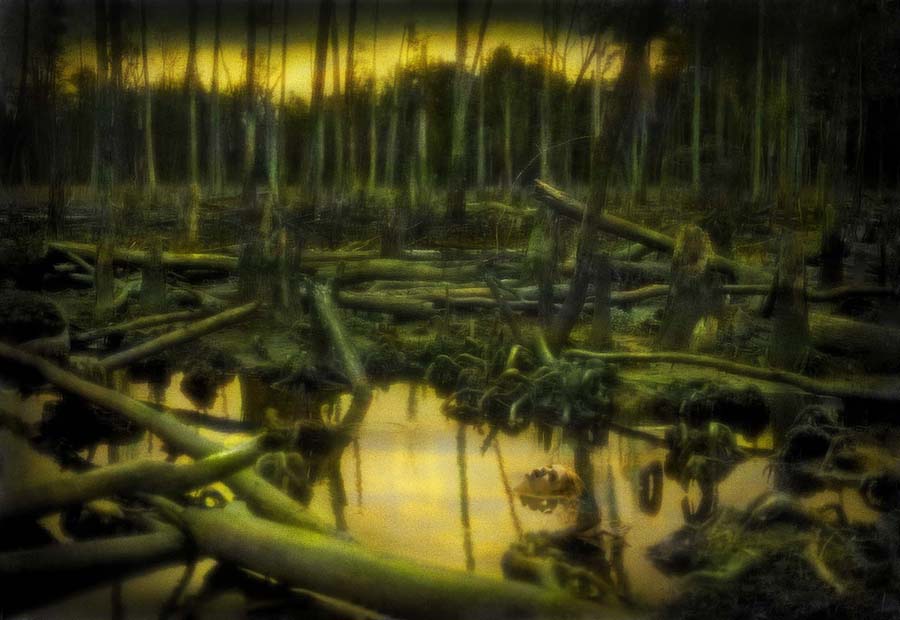 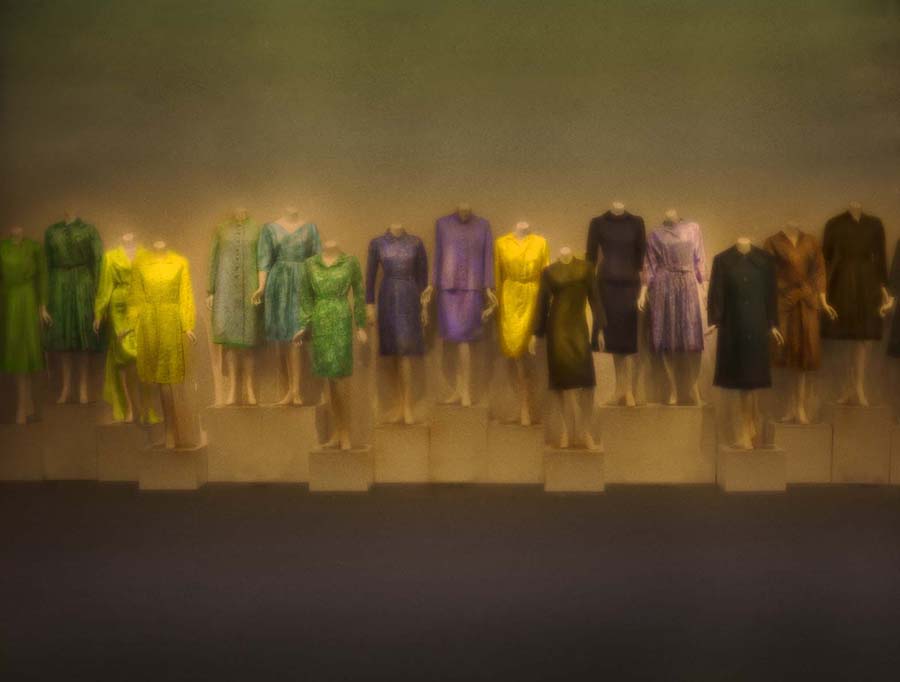 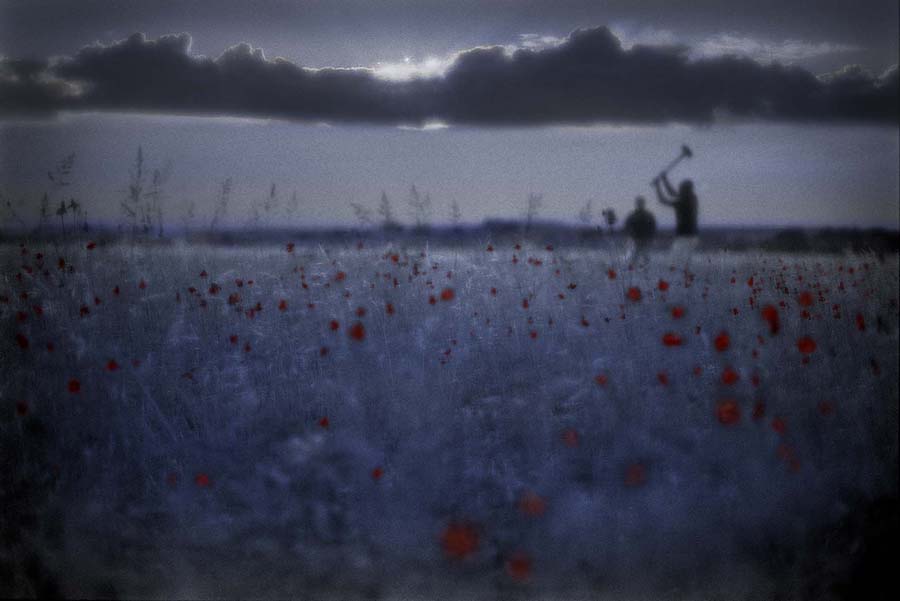 ©Rocky Schenck, Getting Even 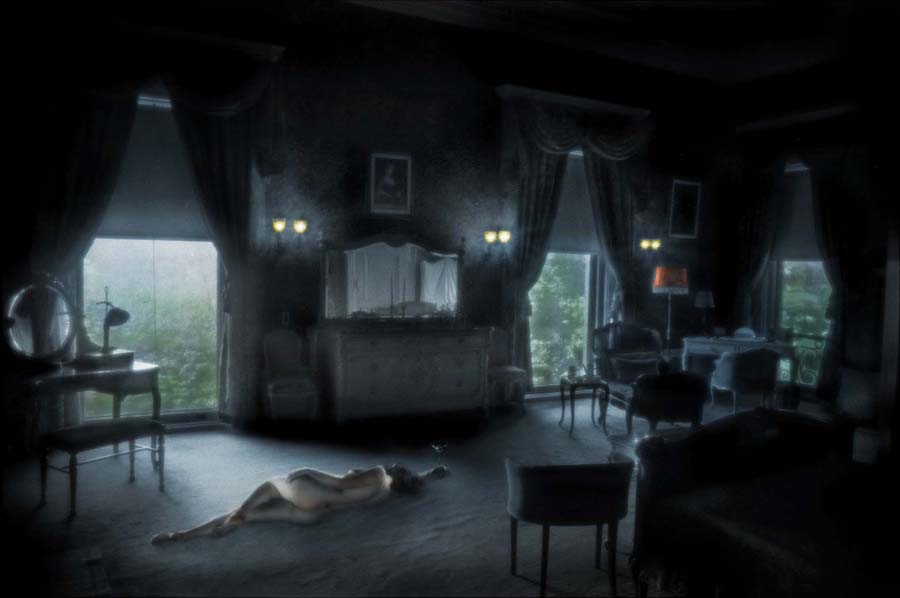 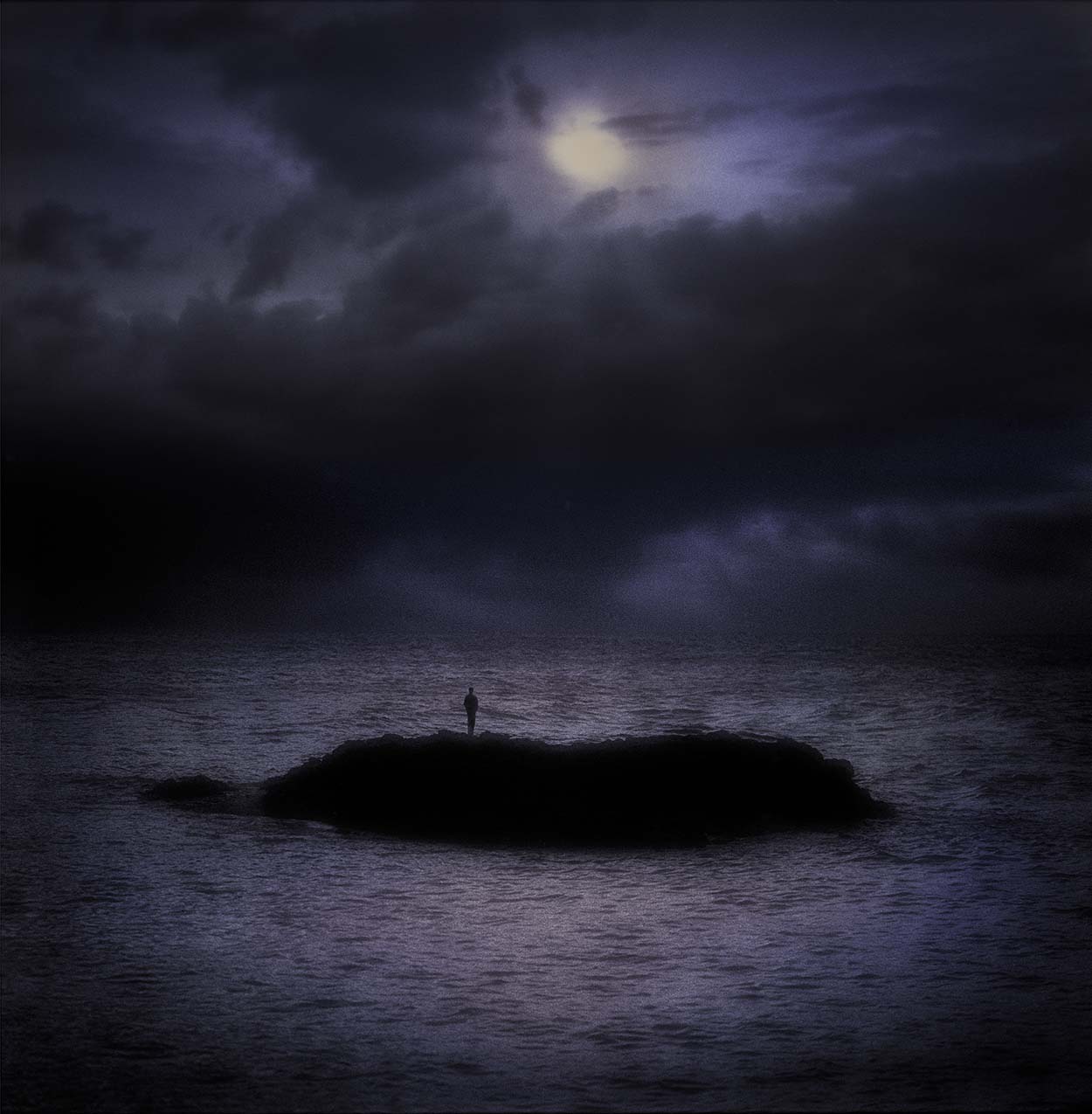 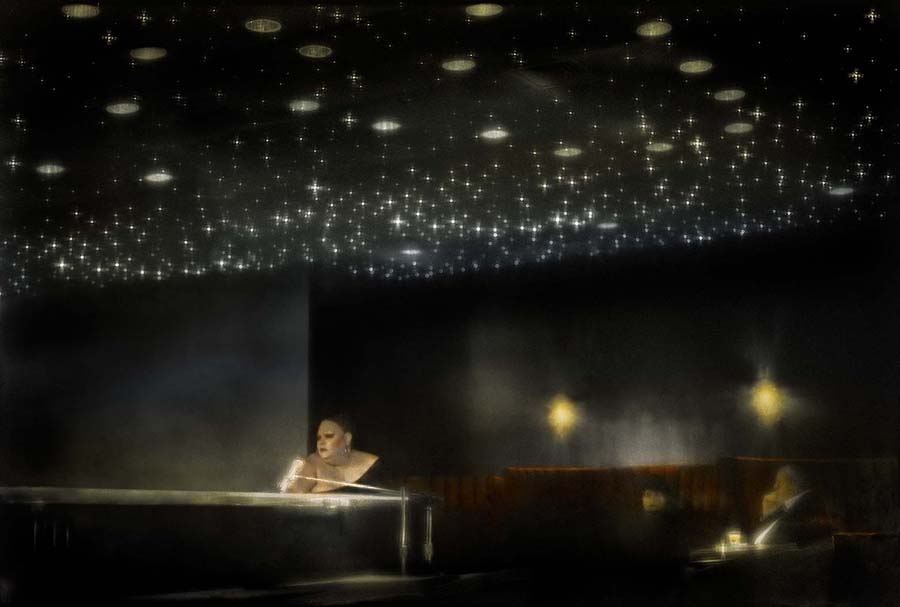 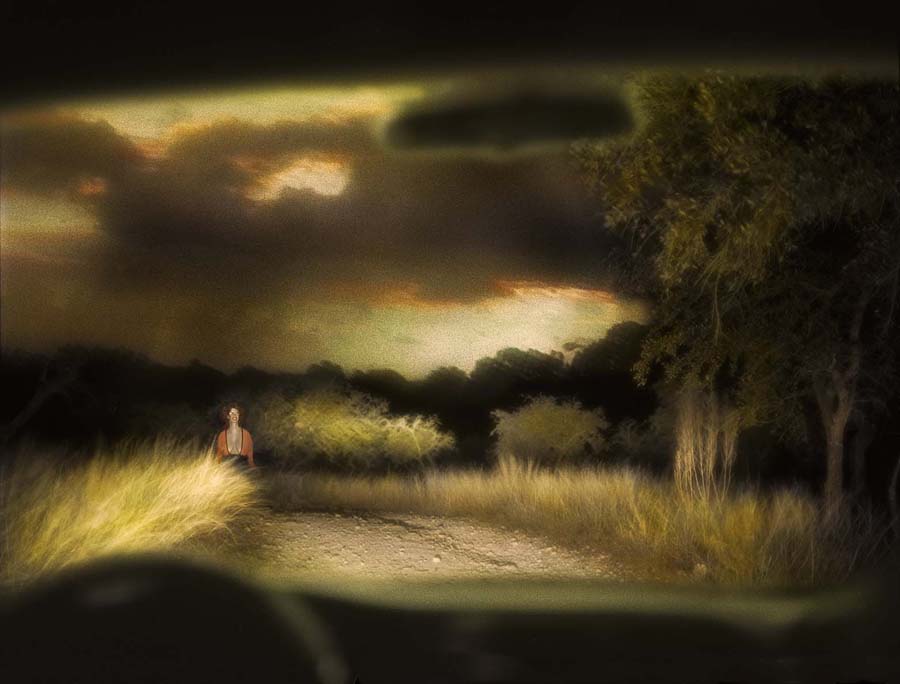 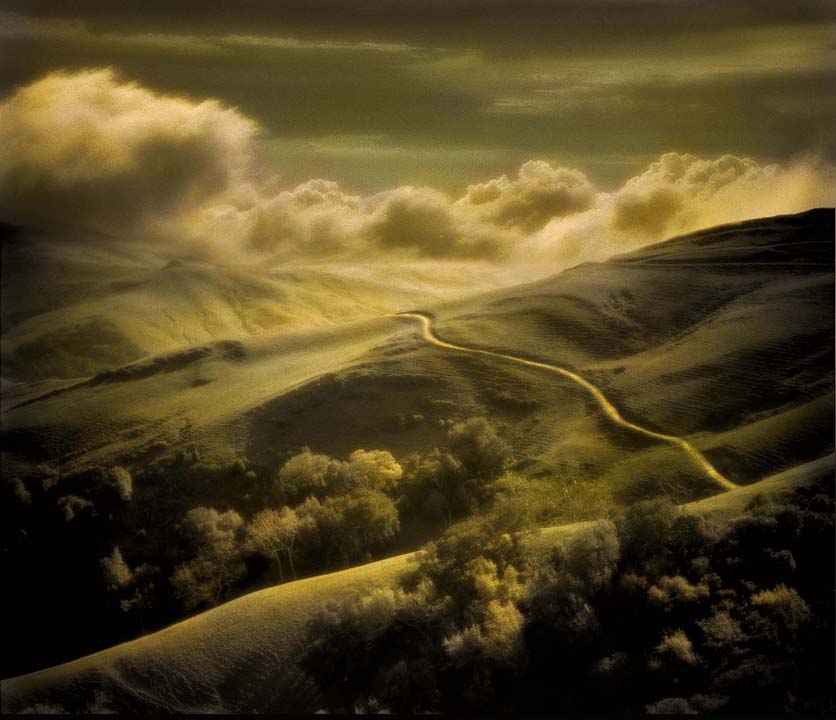 ©Rocky Schenck, Over The River 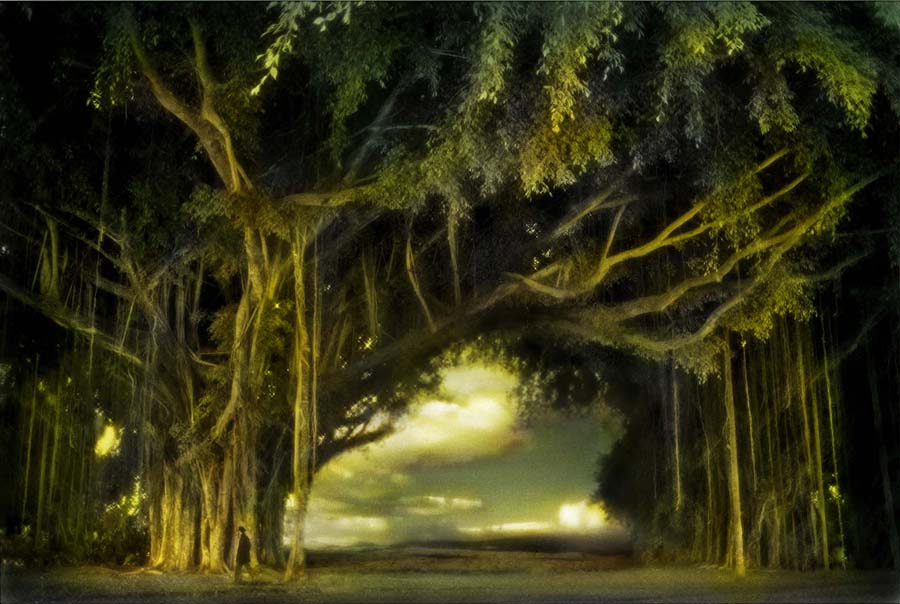