Paula Bronstein: Afghanistan: Between Hope and Fear by Aline SmithsonOctober 1, 2016 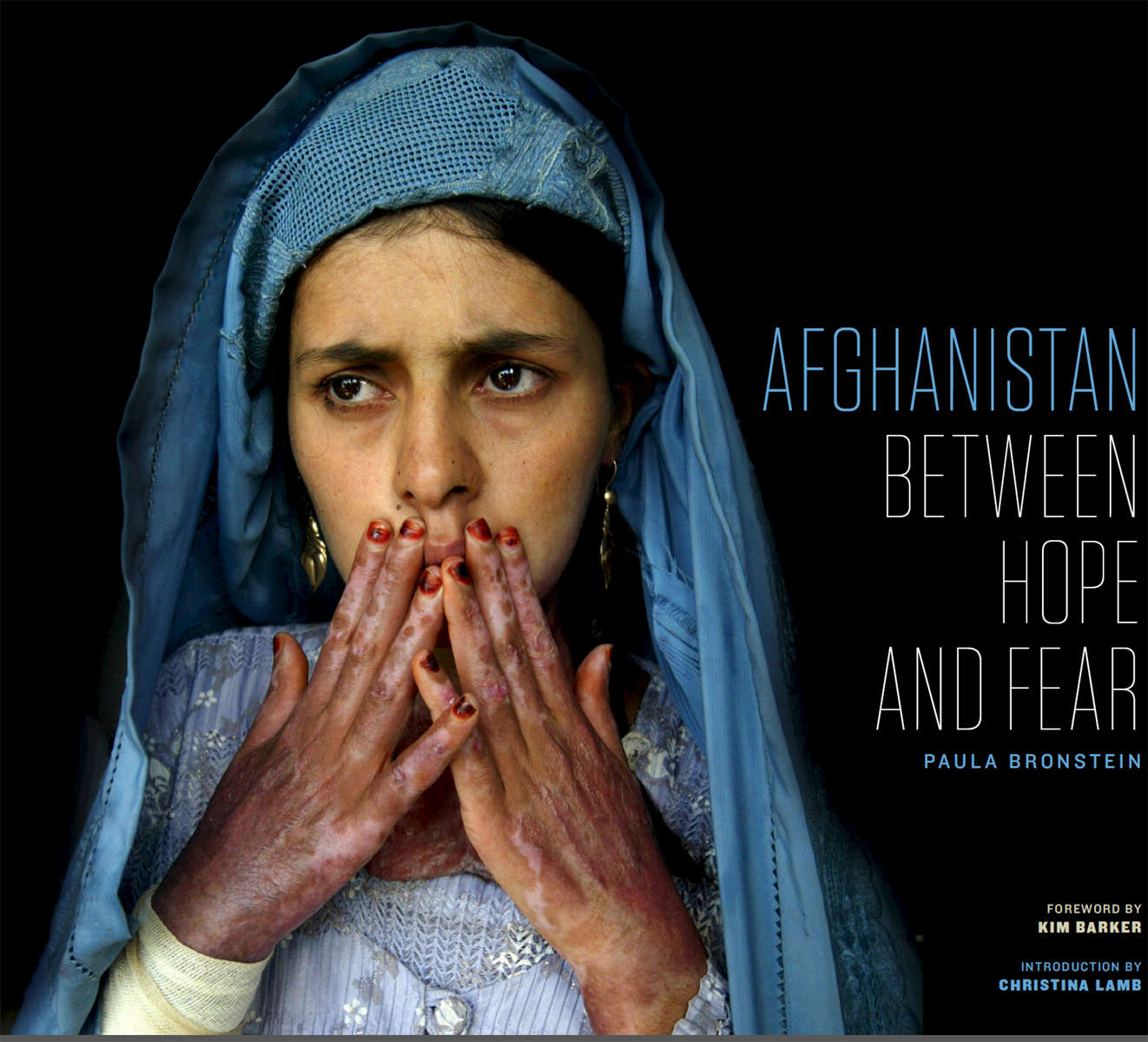 I have made some of the most extraordinary photos of my career in Afghanistan, with face after face offering a complex and intriguing gaze and revealing the constant tension between optimism and reality that shapes the lives of so many here. I keep going back, motivated and inspired by those faces, pushing against the difficulties, hoping to find fewer doors slamming shut and more people seeing reasons to smile.–Paula Bronstein

American photojournalist, Paula Bronstein traveled to Afghanistan in 2001 on assignment for Getty Images to document the U.S-led “Occupation Enduring Freedom” in the wake of the 9/11 attacks. “Captivated by the indomitable resilience and spirit of the Afghan people and the rugged beauty of their country’s landscape, Bronstein has made Afghanistan her mission ever since. She has returned to the country repeatedly over the past 14 years to document the lives of the Afghan people against the backdrop of a brutal and protracted war.” Her powerful and poignant body of work has been collected into a new monograph Afghanistan: Between Hope and Fear (University of Texas Press, August 2016) with a foreword by Kim Barker and an introduction by Christina Lamb. The work is a profound testament to understanding the human experience halfway around the world. 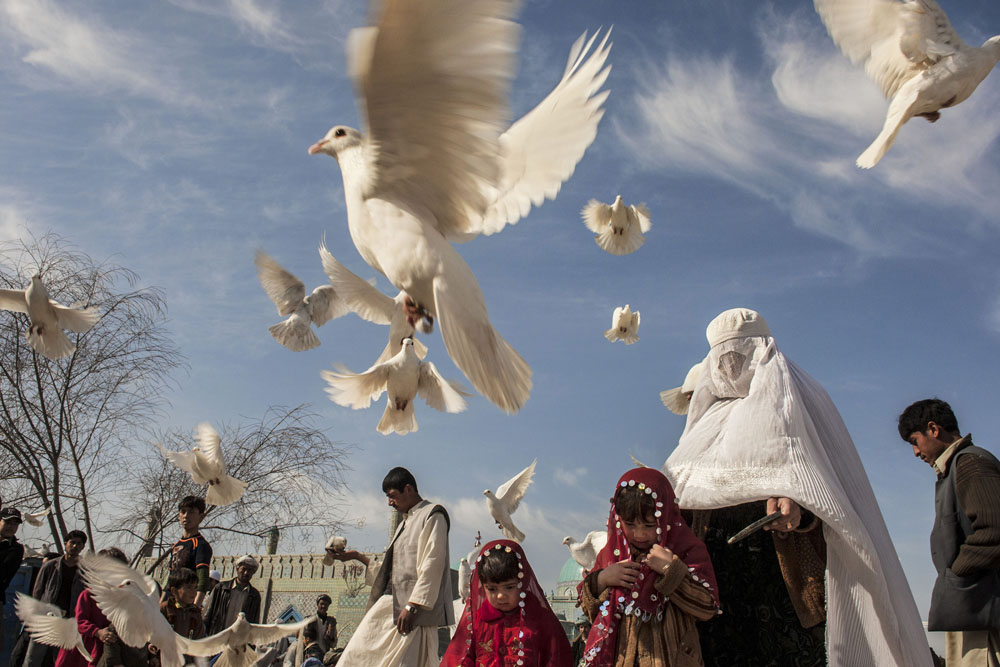 ©Paula Bronstein/Getty Images, Mazar-e-Sharif, March 8, 2008. A woman in a white burqa enjoys an afternoon with her family feeding the white pigeons at the Blue Mosque.

What sets Bronstein’s photographs apart from many of her peers is her choice to spend most of her time with the Afghan people. Her work goes beyond war coverage to reveal the full complexity of daily life in what may be the most reported on, yet least understood country in the world. The result is an intimate photographic portrait of this war-torn country’s people spanning 2001-2015. With empathy born of the challenges of being a female photojournalist working in a conservative Islamic country, Bronstein gives voice to many Afghans who remain silenced by Taliban repression, particularly women and children. 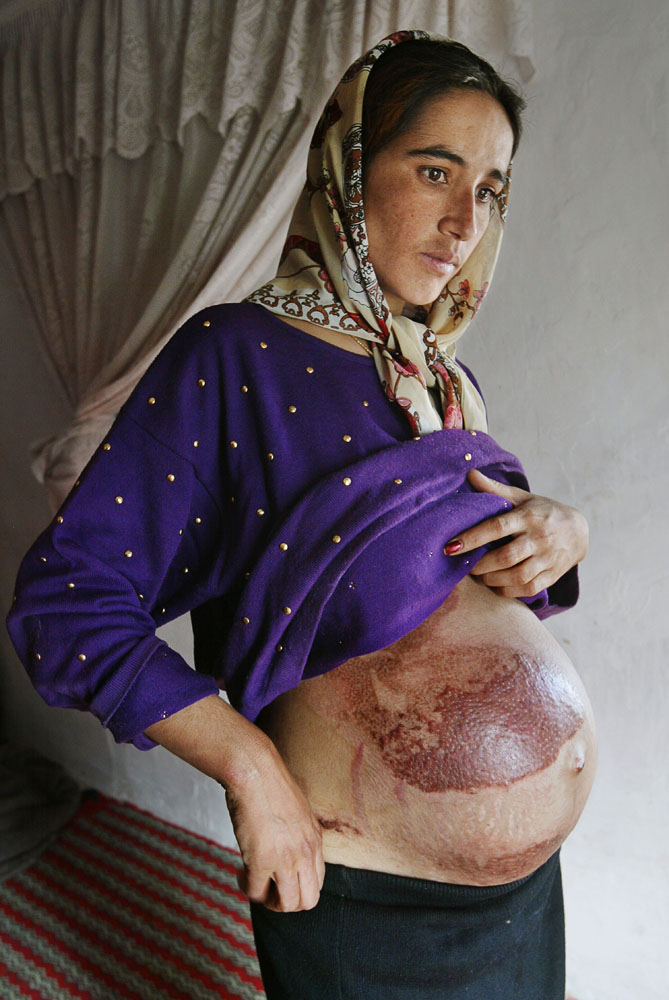 ©Paula Bronstein/Getty Images, Herat, October 21, 2004. Twenty-year-old Mariam, who is nine months pregnant here, shows the scars that resulted from her suicide attempt three months earlier. Devastated by an abusive, violent marriage, she doused herself with household fuel and set it alight, subsequently spending twenty-eight days in the hospital. She now lives with her mother, and her husband is moving back in with her and her two-year-old daughter.

Represented by Getty Images Reportage, Bronstein documents the on-going challenges still facing the country today—among them, human rights abuses against women, poverty, heroin addiction and increased violence and instability—to the stirrings of new hope, including women participating in elections for the first time, education for girls, and expanded job and recreational opportunities for both men and women. 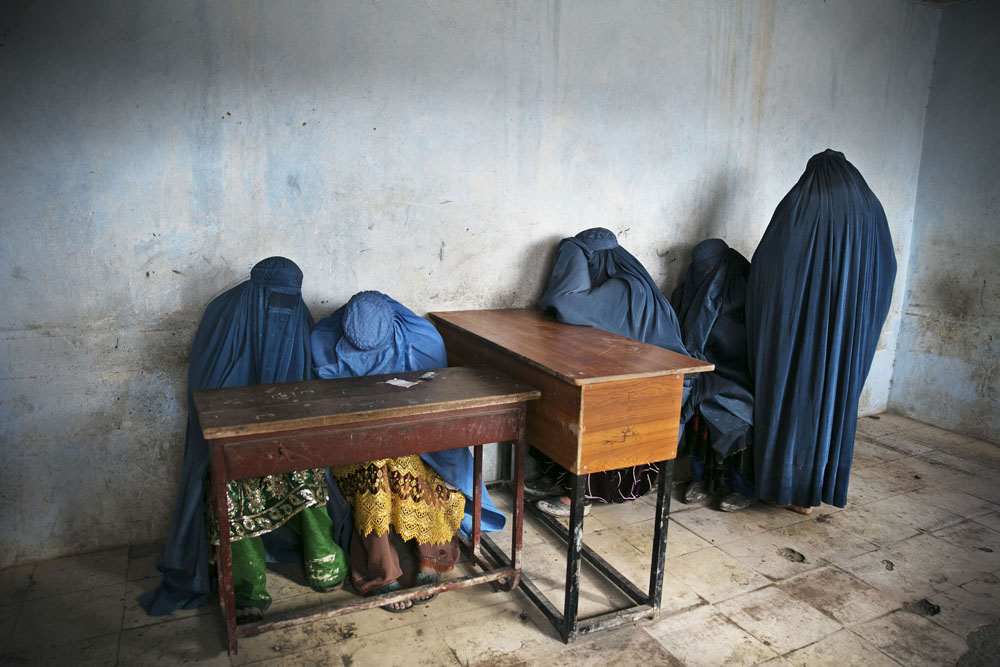 Afghanistan is cited by international rights groups as one of the worst places to live if you are born female and Bronstein’s searing photographs bear this out – from her depiction of the struggle of Afghanistan’s over 2.5 million war widows many of whom are left penniless and powerless and forced to beg on the streets, to the anguish and desperation of Afghan women who practice self-immolation to escape forced marriages and domestic abuse. Bronstein counters the tough issues with positive photographs of women active at political rallies and girls engaged in learning in school classrooms. 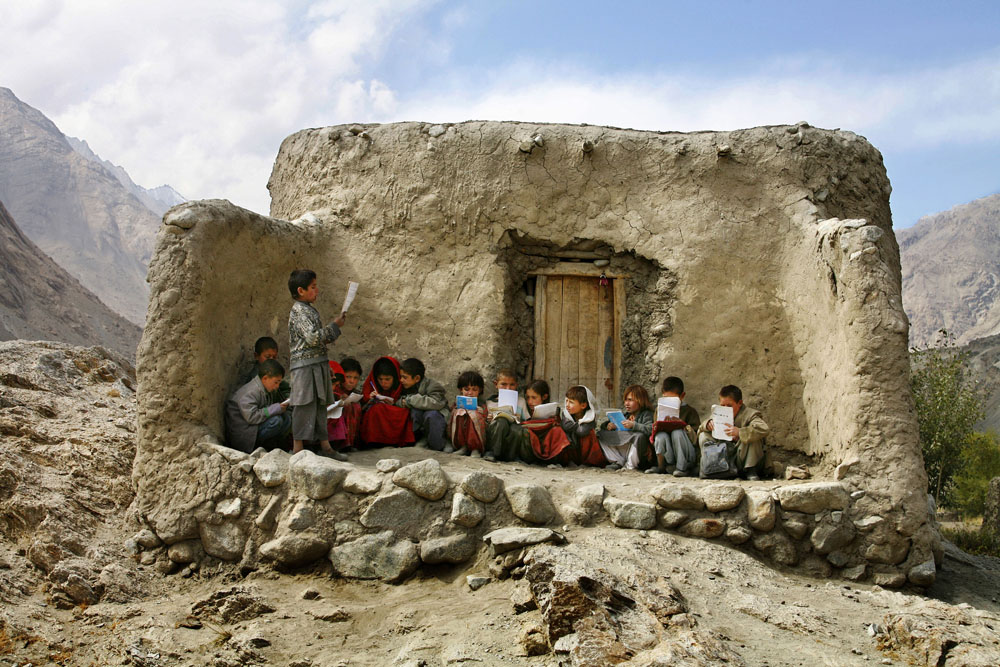 At the core of Bronstein’s work is her compassion for her subjects and her ability to gain extraordinary access to document the hope and beauty as well as the harsh realities of their lives. She is relentless in her pursuit of stories she believes must be shared with the world, and she goes after them, sometimes at great personal risk. 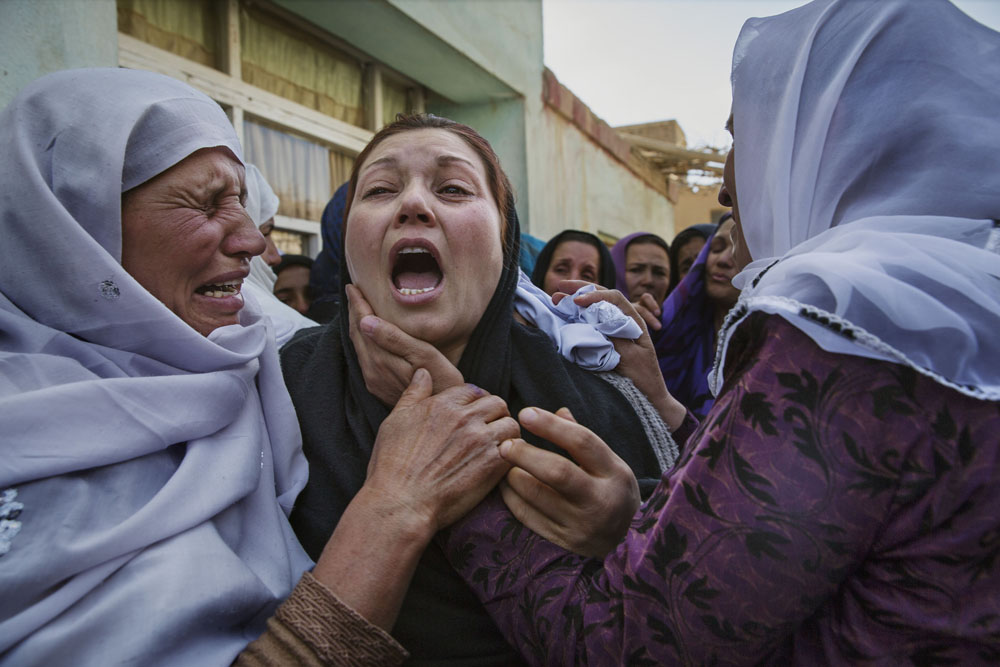 ©Paula Bronstein, Kabul, March 22, 2015. Relatives, friends, and women’s rights activists grieve at the home of Farkhunda Malikzada, who was killed by a mob in the center of Kabul. Farkhunda was violently beaten and set on fire after a local cleric accused her of burning a Qur’an. 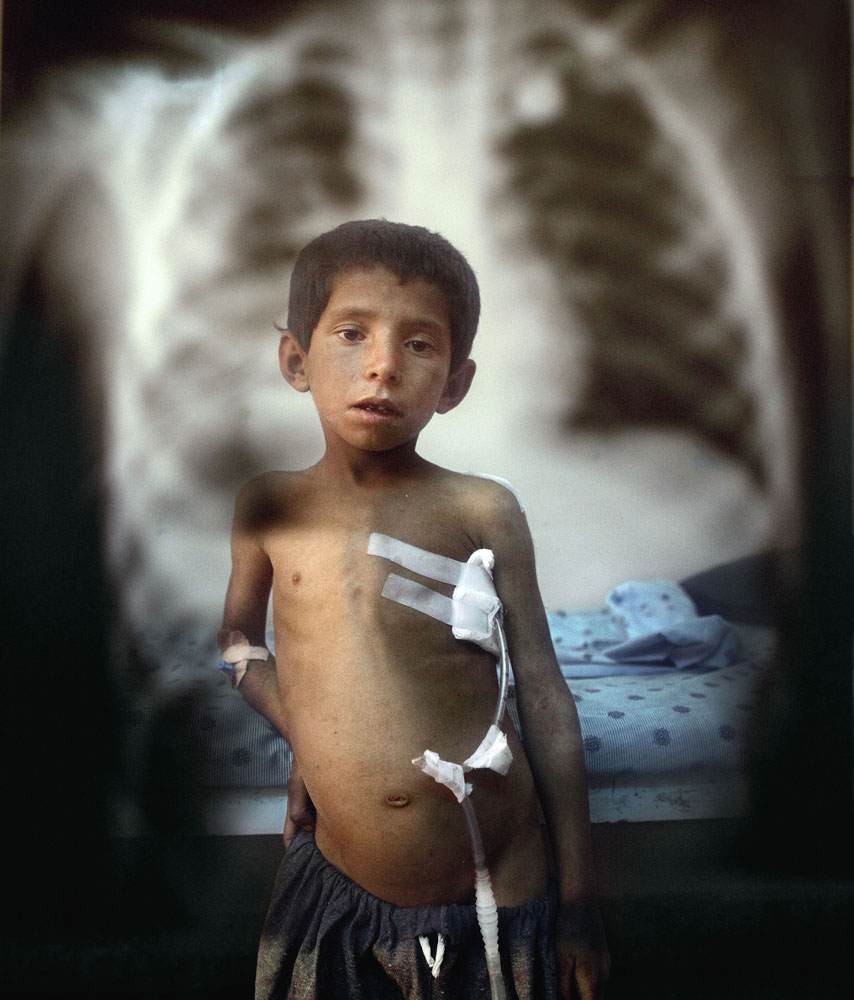 ©Paula Bronstein/Getty Images, Kandahar, October 13, 2009. Seven-year-old Attiullah, a patient at Mirwais Hospital, stands alongside an X-ray showing the bullet that entered his back, nearly killing him. Attiullah was shot by US forces when he was caught in crossfire as he was herding sheep.

In her introduction, fellow award-winning journalist Christina Lamb describes the gains that Afghan women have made since the overthrow of the Taliban, as well as the daunting obstacles they still face, and Kim Barker, a staff reporter for The New York Times, writes the foreword. Afghanistan: Between Hope and Fear is an eloquent portrait of everyday life and a story about the legacy of America’s longest war. This important and beautiful volume is the most complete visual narrative history of the country currently in print. 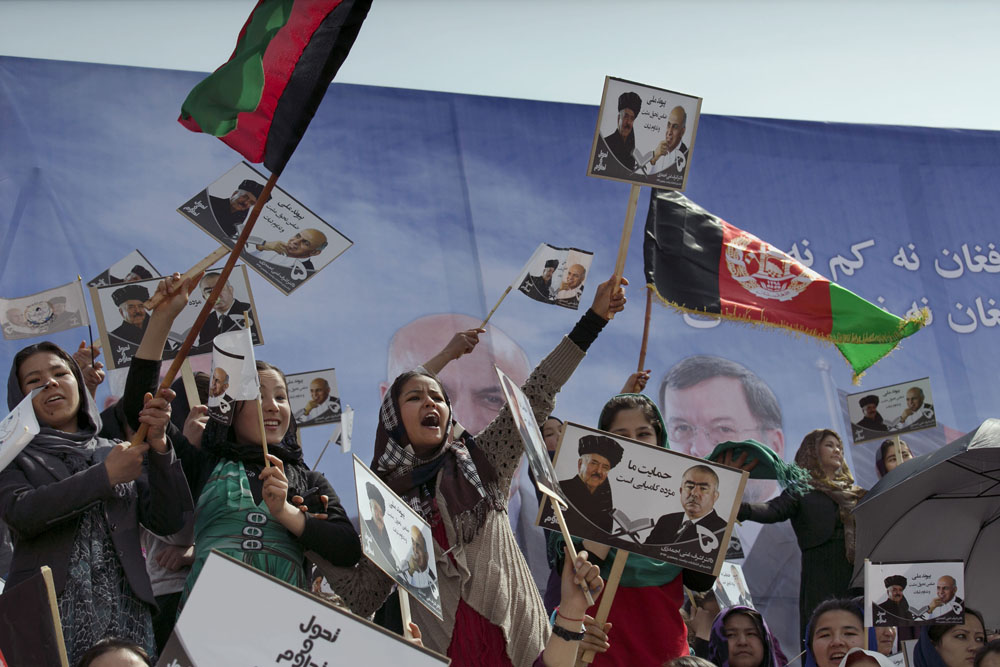 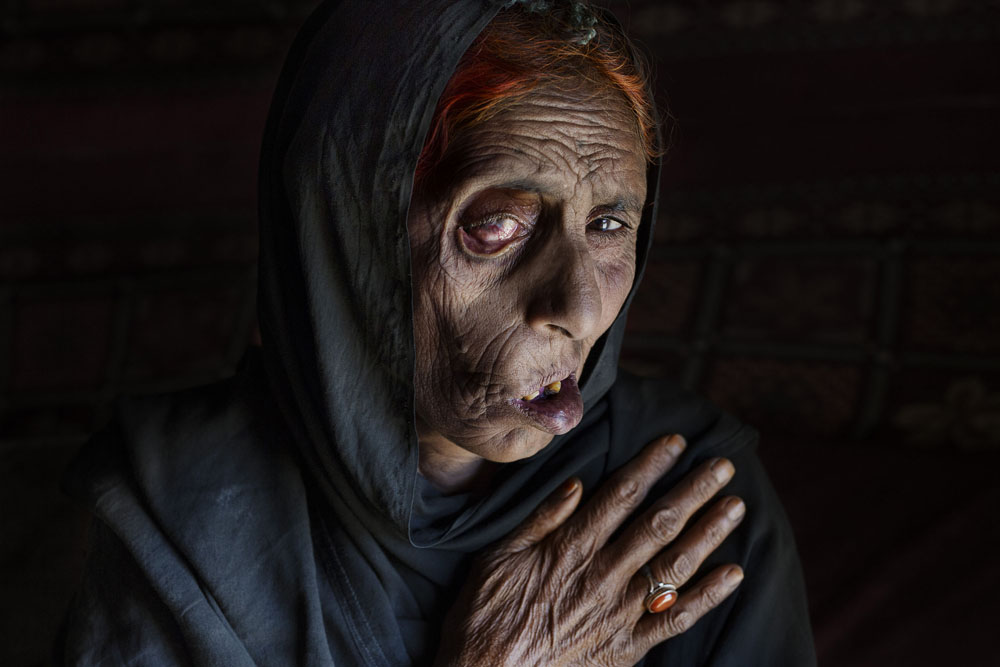 ©Paula Bronstein, Kabul, April 10, 2015. Naiz Bibi, who was blinded in one eye, claims she is sixty-eight but really can’t remember clearly. After a NATO air strike killed seven members of her family, including her husband, a daughter, and two sons, she and eight remaining family members fled north, ending up in the squalid Nasaji Bagrami camp along with thousands of other war refugees.

With over 30 years in the news business, Paula Bronstein is one of America’s most distinguished female photojournalists. She has won numerous awards, among them: Pictures of the Year International; National Press Photographers Association (Runner up: “Photographer Of The Year”); The Pulitzer Prize (Finalist: “Breaking News”); The Overseas Press Club of America (John Faber Award); Foreign Correspondents Club: Thailand (“Asia Photographer of the Year”); Leica Oskar Barnack Award (Finalist); and China International Press Photo (“Photo Of The Year”). Her work has been featured in numerous individual and group exhibitions including “Afghanistan’s Health Crisis,” Lido, Italy (October 2015) and the Annenberg Space for Photography, Los Angeles (December 13, 2014 – May 3, 2015); “Women in War” at the 2014 Korea Photo Biennale; and “Women Between Peace and War – Afghanistan,” which traveled to New York, Miami, Denver, Chicago, Washington D.C., Philadelphia, Los Angeles, and San Francisco. Other venues include War Photo Limited in Dubrovnik – “Women War Photographers,” Visa Pour L’Image, Perpignan, France (2008), The Fence an outdoor Photography Exhibition – Photoville, New York (2014). 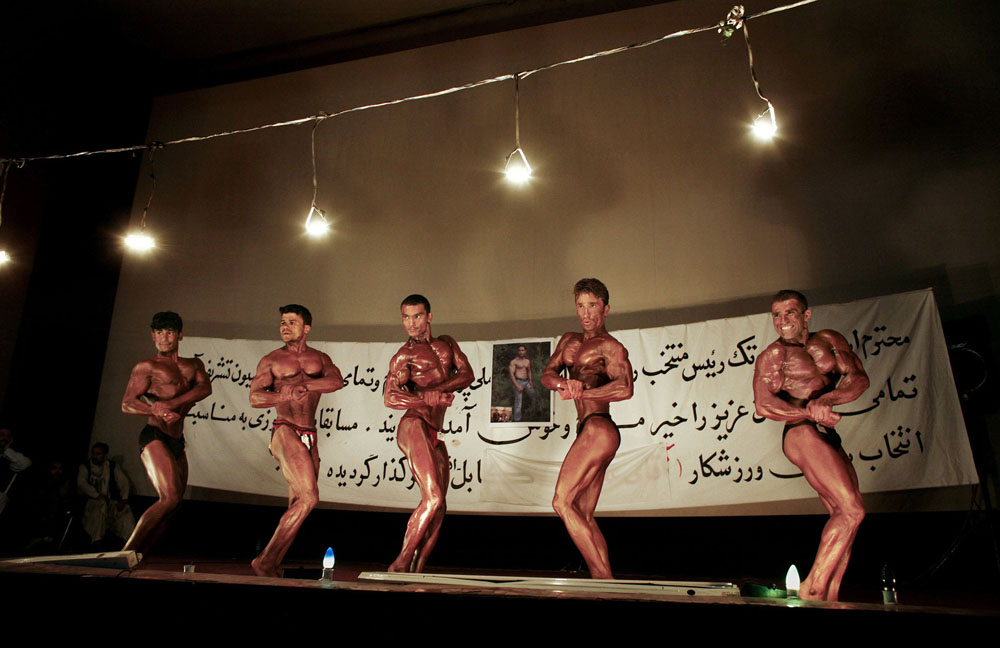 ©Paula Bronstein/Getty Images, Kabul, Afghan bodybuilders compete in the 55-60kg category during a regional Bodybuilding competition August 6, 2007 in Kabul, Afghanistan. Bodybuilding is a very popular sport in Afghanistan in a country where men like the image of being physically strong. It’s affordable for most Afghans and its popularity is growing in many provinces. Photos of Arnold Schwarzenegger are still hanging in many local gyms as their iconic image of a muscle bound male. 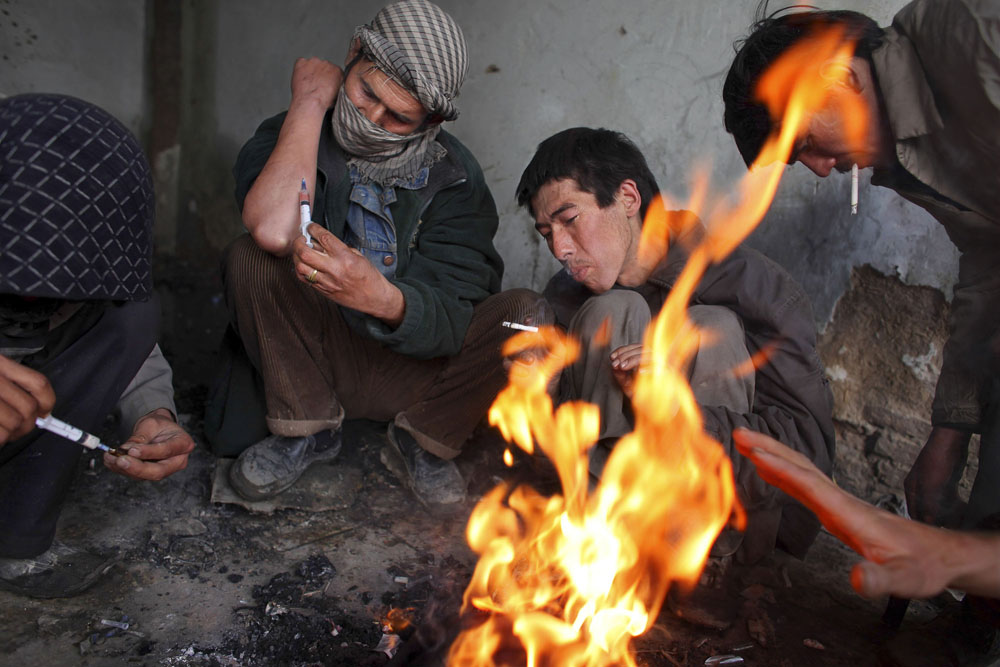 ©Paula Bronstein/Getty Images, Kabul, February 9, 2009. Addicts inject heroin while trying to keep warm inside the abandoned Russian Cultural Center, which the capital city’s addicts use as a common gathering point. Heroin is readily available, costing about one dollar a hit. 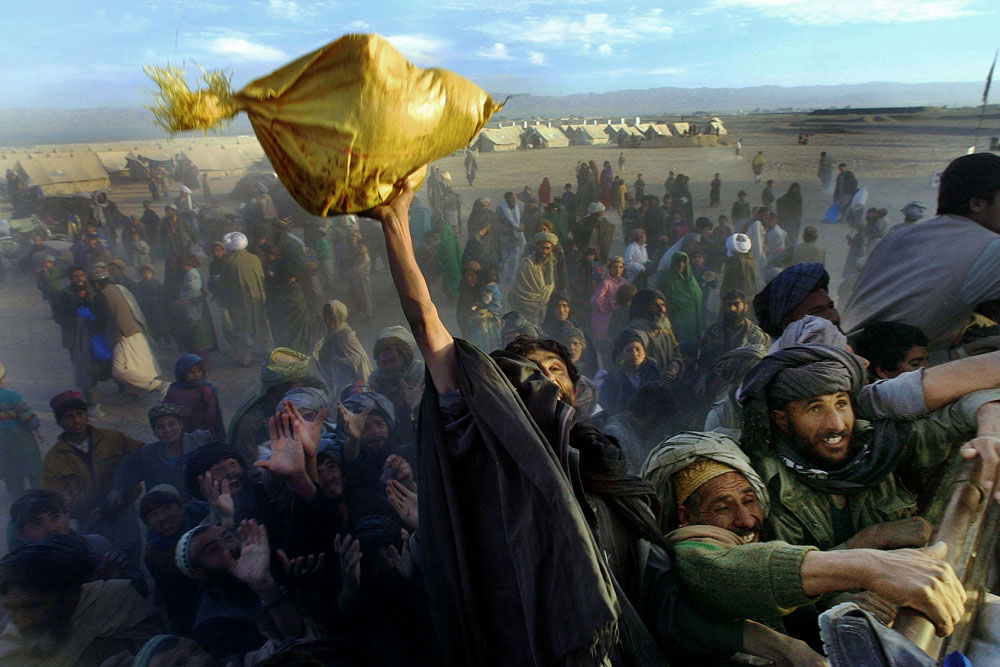 ©Paula Bronstein/Getty Images, Chaman, Pakistan, December 4, 2001. Afghans at the Killi Faizo refugee camp desperately reach for bags of rice being handed out to the thousands who escaped the bombardment in southern Afghanistan during Operation Enduring Freedom. 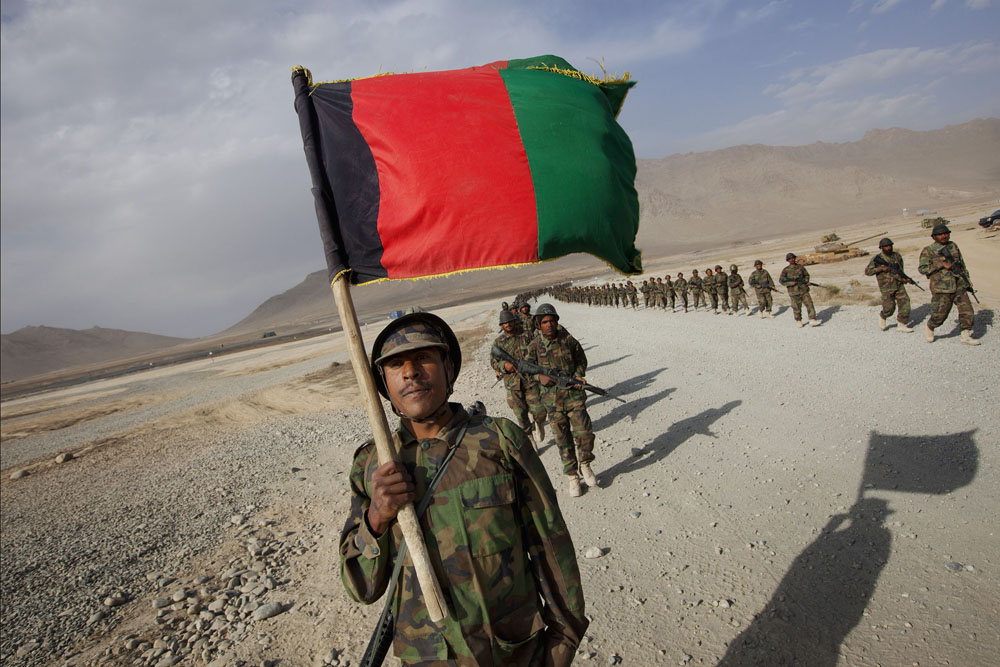 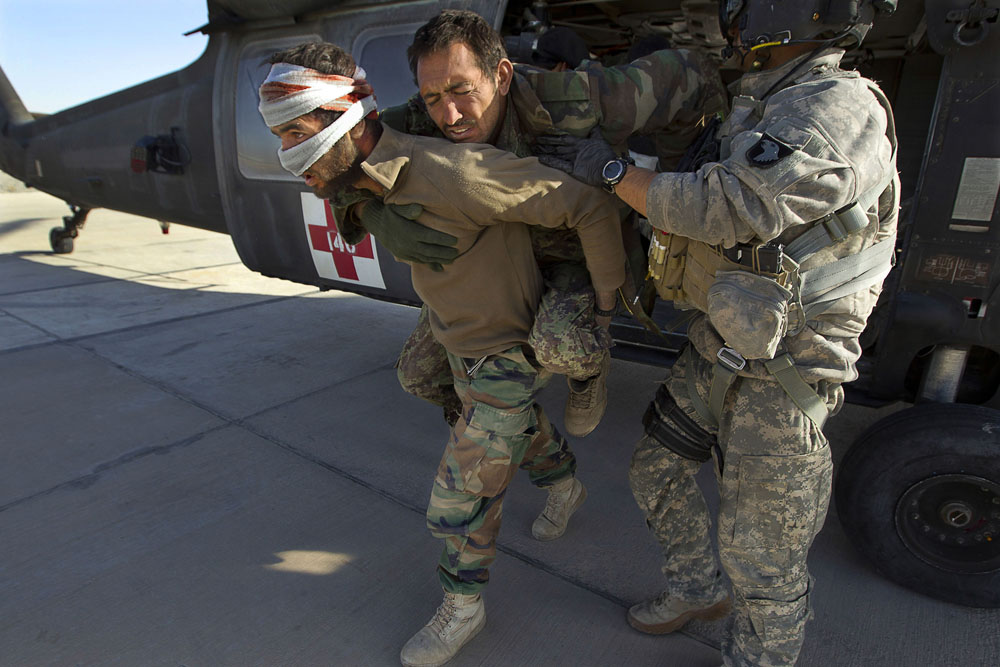 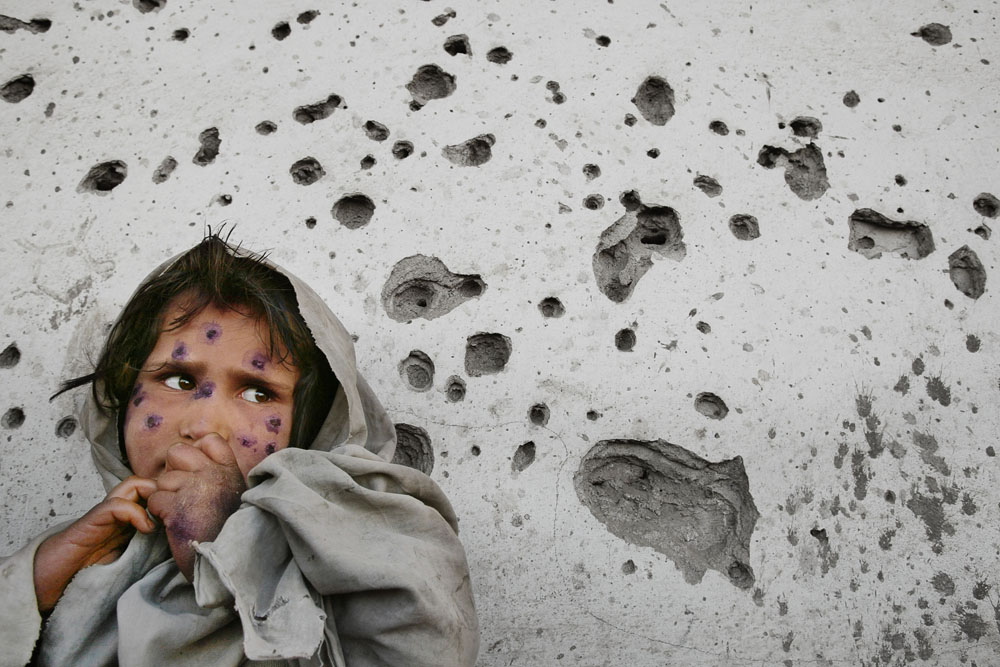 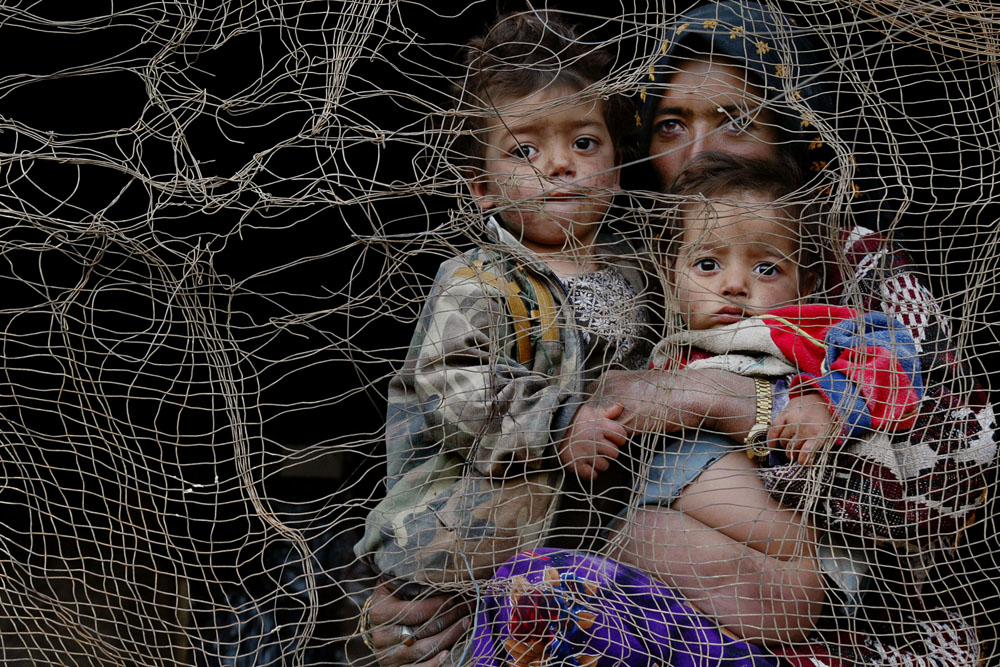 ©Paula Bronstein/Getty Images, Bamiyan, November 19, 2003. A mother and her two children look out from their cave dwelling. Many families fleeing the Taliban took refuge inside caves adjacent to Bamiyan’s destroyed ancient Buddha statues and now have nowhere else to live. 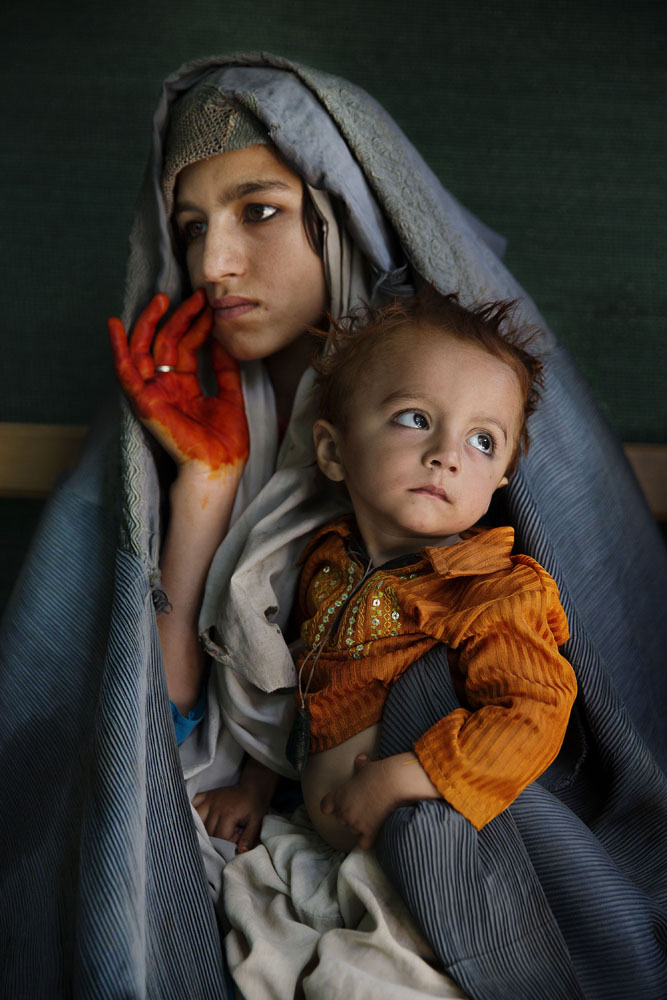 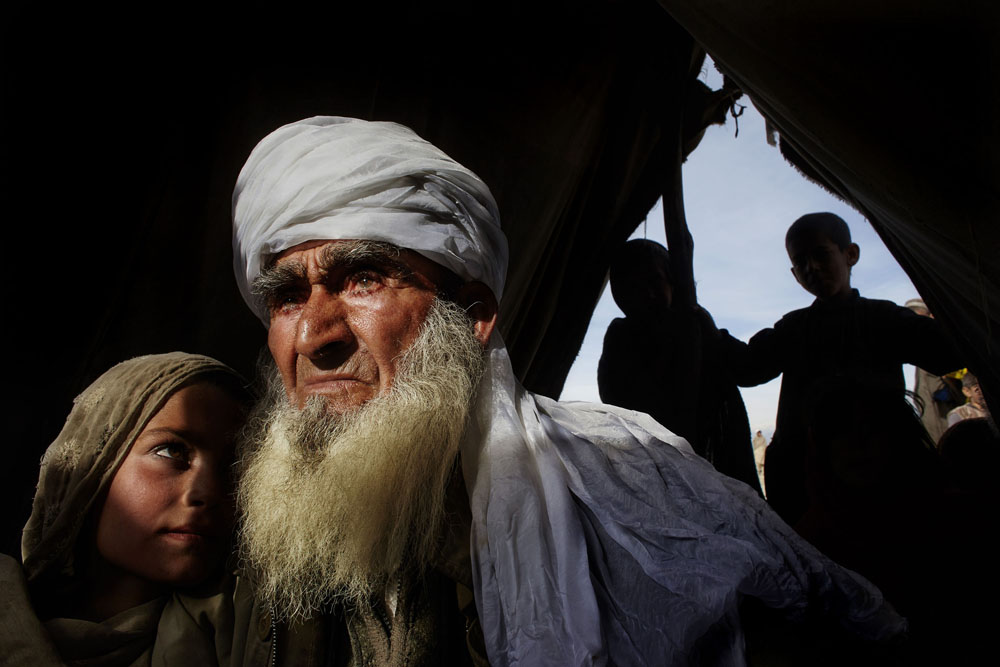 ©Paula Bronstein/Getty Images,, Surobi, Nangarhar Province, February 7, 2009. An elderly man holds his granddaughter in their tent at a refugee camp after they were forced to flee their village, which US and NATO forces had bombed because, they claimed, it was a Taliban hideout. 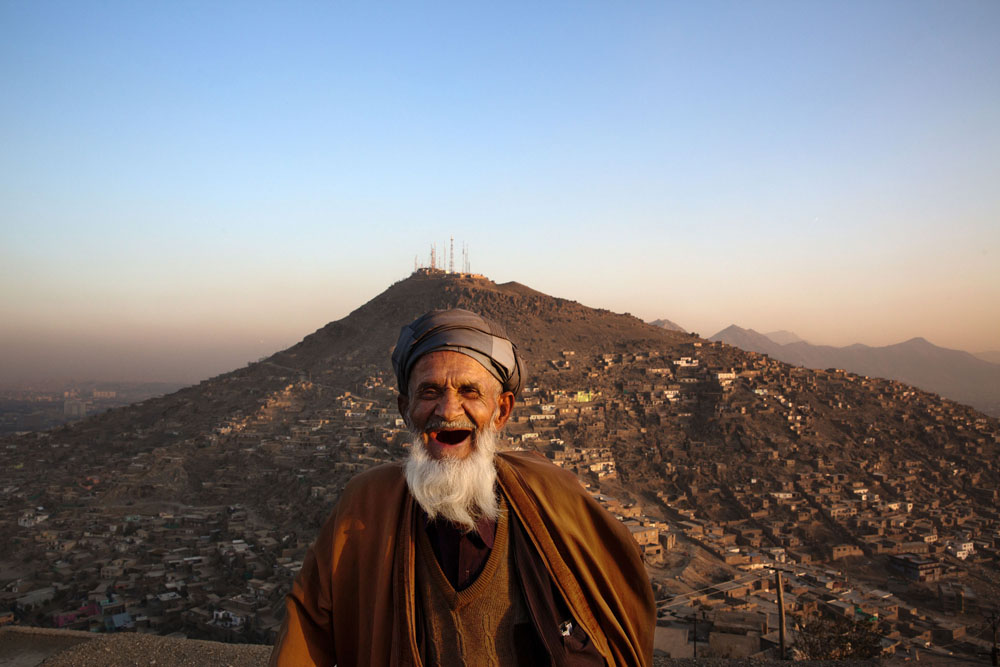 November 21, 2014. Eid Muhammad, seventy, overlooking the hills of Kabul. Millions of Afghans, however, live in informal settlements occupied without a formal deed.