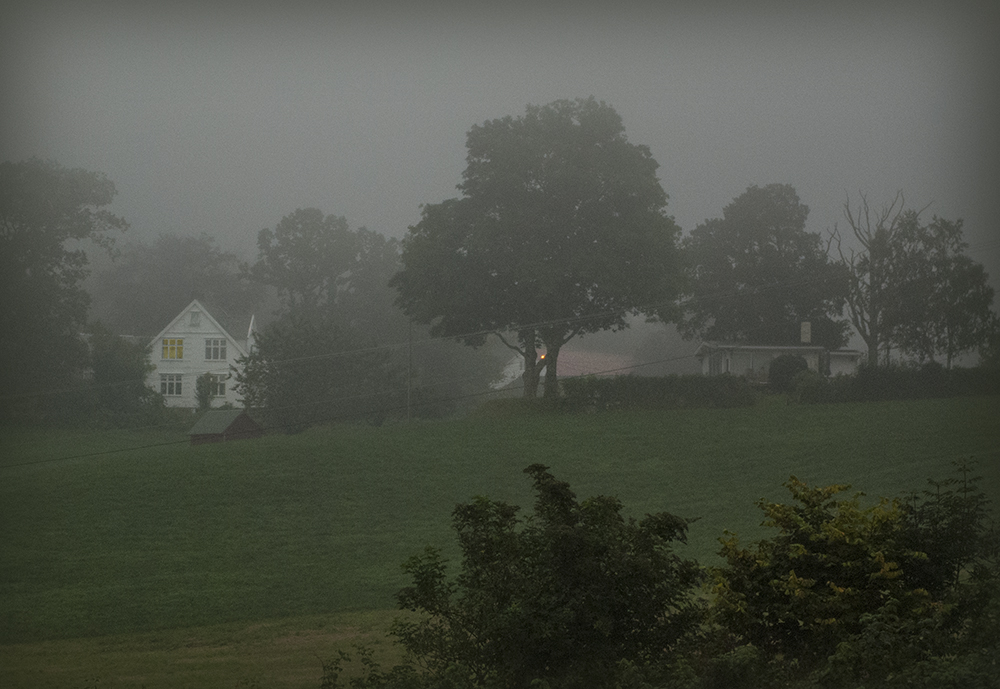 When I heard that my friend and photographic artist Fran Forman was enjoying an artist residency in Norway, I was intrigued and excited for her (and admit, a little jealous). Fran was able to enjoy the benefits of a focused amount of time dedicated to her art, so I wanted to know more about the experience. For three weeks, she was an Artist in Residence at Halsnøy Kloster at the Monastery at Halsnøy, Norway. Her essay on her residency follows.

The Sunnhordland Museum invites artists working with photography to come to the island of Halsnøy, off the west coast of Norway, to stay and work in a very special place.The Monastery “comprises the ruins of an Augustine medieval monastery established in 1163. Among the ruins is a rustic old mansion from 1841, where the invited artists stay. The monastery is a part of Sunnhordland Museum and is situated in beautiful surroundings on the island of Halsnøy at the inlet of the Hardanger fjord. Over the years the Monastery has become a center for arts and culture, offering concerts, exhibitions and other kinds of cultural activities. The Monastery is now also becoming a center for photography, by offering this international Artist in Residence program for photographers, and also photographic workshops and lectures. And Fran was one of the lucky photographic artists to be selected for 2016. 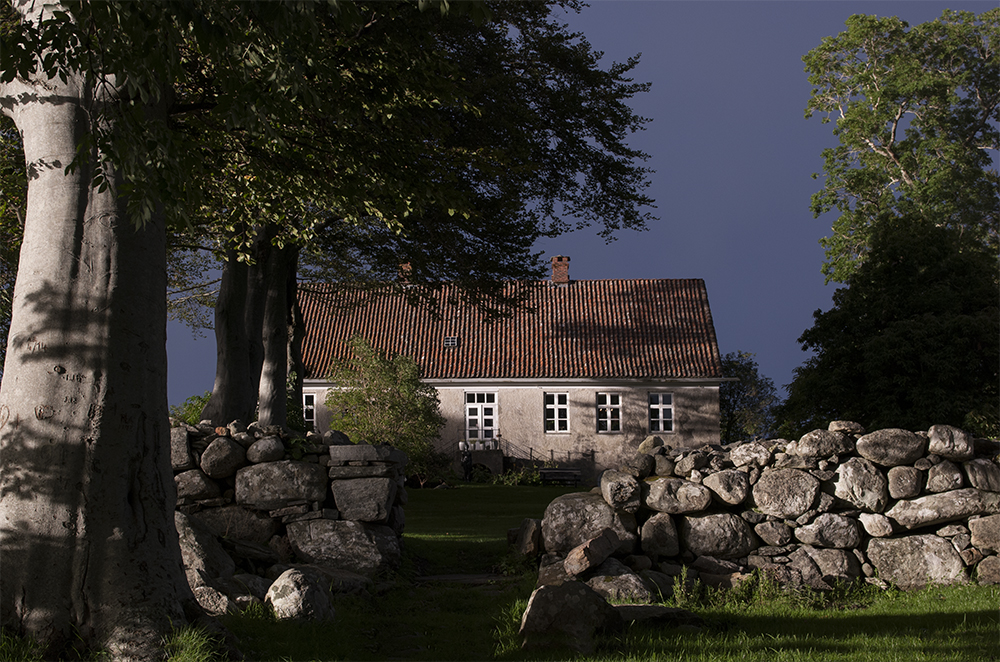 ©Fran Forman, The back yard dropping to the sea, after the rain, early evening

Fran Forman studied art and sociology as an undergraduate at Brandeis University and then received an MSW, working for several years with heroin addicts. Discovering that she could indeed earn a living in the arts, she earned an MFA in graphic design but spent most of her grad school years in the darkroom. She wanted to be a photographer but didn’t want to shoot weddings or war zones; she wanted to do animation but didn’t have the patience. She turned to graphic design because it was the perfect intersection of fine art, commerce and psychology, and from graphic design she came to understand the emotional power of visual communication within a defined space.

She held a succession of positions in the field of illustration and design: branding, print, and signage for corporate, arts, and retail establishments; CD-ROMs for books, museum installations, sales, and training; book cover illustrations; animations, multimedia, and web designs. Additionally, she was Senior Designer with AOL Time Warner, where she was a designer of the preeminent website devoted to African American culture and where she produced photo illustrations for the daily editorial content.

Between professional life and raising two daughters, Fran continued to create her personal art, combining her illustrative and photographic skills with a passion for surrealism, paradox, illusion, assemblage, and the dislocations of time and place.

Fran’s photo-paintings are in the permanent collections of The Smithsonian National Air and Space Museum (NASM, Washington, DC), the Museum of Fine Arts, Houston, The Grace Museum, Abilene, and the North Down Museum, Northern Ireland.

Fran is a Resident Scholar at the Women’s Studies Research Center at Brandeis University and teaches workshops at selected schools in the US and abroad. She is also a recipient of grants from the Sassower, Tyre, Tavris, and Puffin Foundations. She has been a Resident Artist at Holsnoy Kloster, Norway, The Studios of Key West, and the Vermont Studio Center.

Escape Artist: The Art of Fran Forman, was published by Schiffer Books in 2014 and was selected by Elizabeth Avedon as One of the Best Photobooks of 2014 and won First Prize in an international juried competition selected by 21st Editions.She is also a featured artist in Photoshop Masking and Compositing, by Katrin Eismann, Sean Duggan, and Jim Porto, published in 2013, in Contemporary Cape Cod Artists (2014), and in Professional Artist magazine.

Fran has won numerous significant awards and prizes; most recently, first place from the Julia Margaret Cameron Awards, three awards (First Place, Gold, and Silver) from PX3 Prix de la Photographie, Paris 2012. In 2011, she was invited to exhibit and attend the China 2nd Biennial International Photographic Cultural Festival and Exhibition, Lishui, China (one of only thirty Americans); she also won the second prize from the World Photography Gala Award (out of over 8000 entries) in the People and Portrait category; in 2010, she won 1st place as well as an Honorable Mention in the Fine Arts Collage sub-category for the Lucie Foundation’s International Photo Awards (IPA). She was one of the Top 40 at the LA Center for Digital Art in 2010 and 2006. She also received first and second place awards in the Fine Arts sub-categories at the Px3 Prix de la Photographie (2008 and 2007 respectively); she was a fourth place winner in the Adobe sponsored Photoworkshop.com; and she was a finalist for an Ultimate Eye Foundation grant. And at the International Photo Awards 2008, she won 2nd place for Collage and Honorable Mention for Digitally Enhanced. 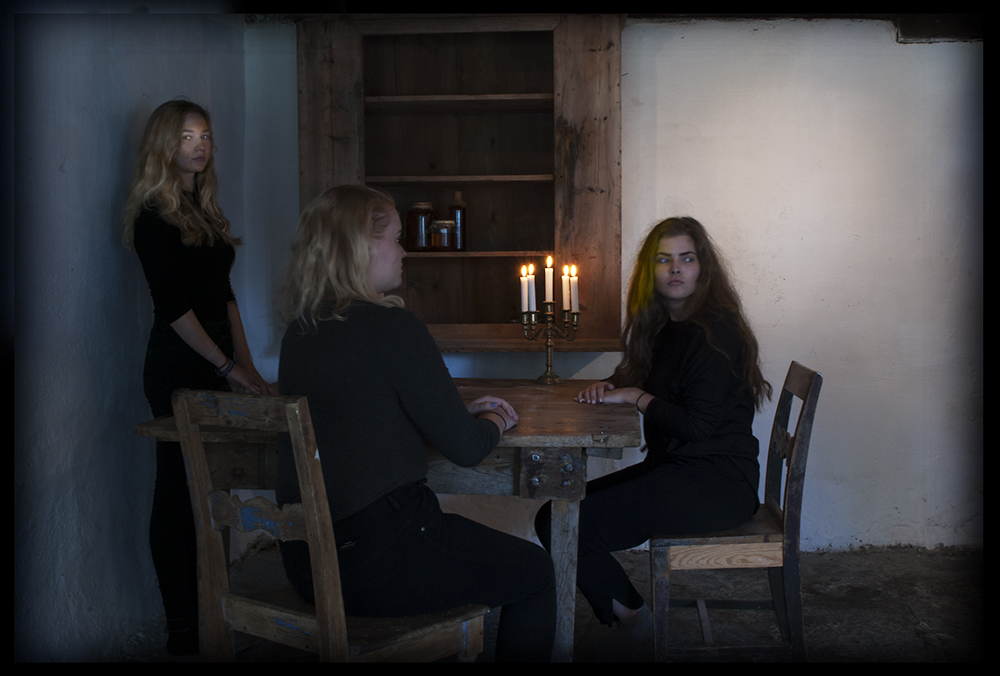 Before I began my artist residency at Halsnoy Kloster in Norway, I communicated briefly with two previous resident artists, Sharon Harper and Aurelia Frey. What was your experience like, I asked. Both reported “magical”. But how could two artists of entirely different sensibilities, from two continents, describe their experience with the same word? I was skeptical.

But wrong. If magic means “transporting oneself from the quotidian interruptions of life, of entering in a new reality”, then yes, my experience was indeed magical. 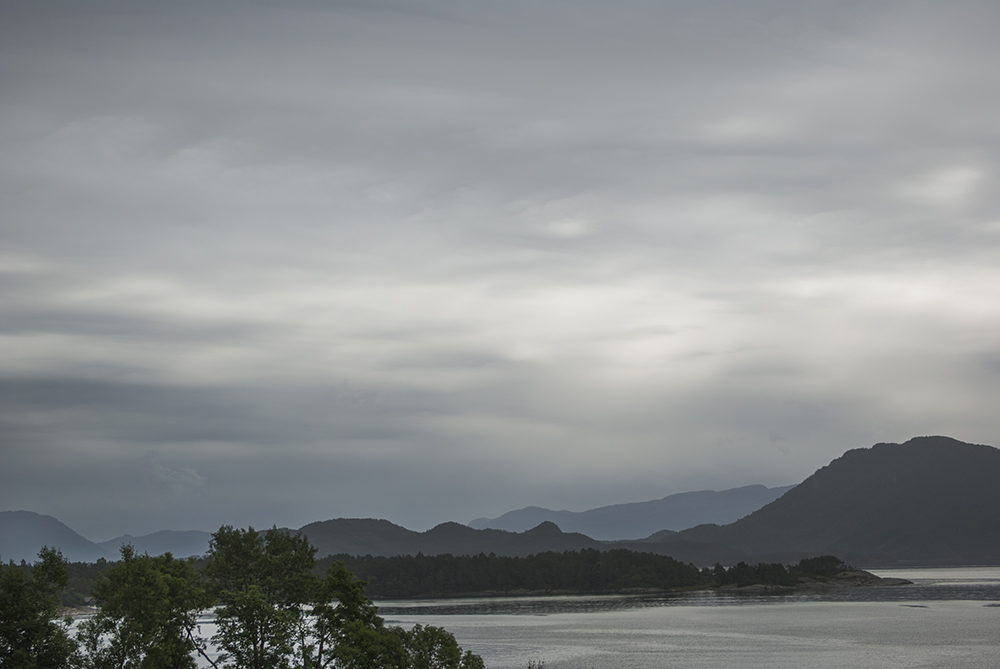 Along with two other and very talented photographers, Sophie Zénon of France and Louisa-Marie Summer of Germany, I spent three weeks living on the site of a former Augustin monastery on a tiny spit of land, on a tiny island, in southwestern Norway. Near the intersection of two fjords, Halsnoy Kloster is suffused in a soft, diffused light, even during the (predictable and frequent) days of rain and fog. On some days, the colors of the surrounding mountains, sea, and fields were bathed in shades of gray – warm to cool grays, more shades of gray than I could imagine – and the sky seemed to reach down to the land with no horizon line separating the two. On the rare days when the sun was shining, the light was so startling that I could swear the landscape – the greens and blues, the yellow and red houses, the azur sea, the white and black sheep, the white bales of hay – was on steroids. 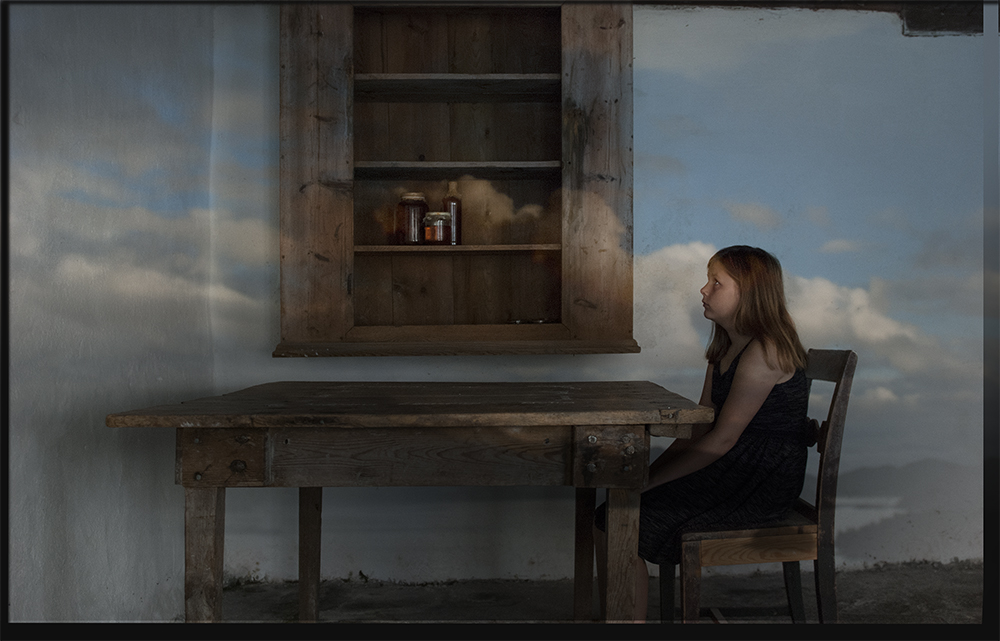 ©Fran Forman, Girl at a Table

We three photographers lived alone in an ancient house that some islanders claimed held ghosts and spirits. I spent many days following the light and shadows as it moved around each room, perhaps searching for those spirits, and, quite uncharacteristically for me, I even awoke several early mornings, just to witness the pink and blue hues overtake the fields from my windows. 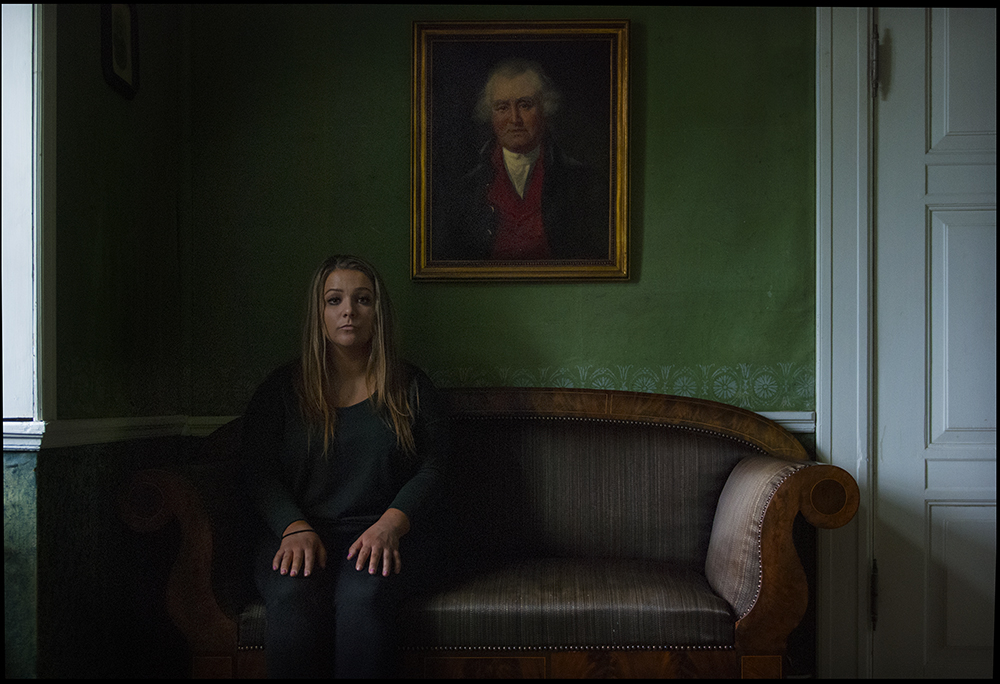 Halsnoy Kloster is one of the many sites within the aegis of the Sunnhordland Museum, devoted to the culture, history, and arts of the southwestern region of the country. The directors of the Museum’s residency program, Oyvind Hjelmen and Helen Petersen, are two photographers and artists committed to introducing the Sunnhordland community to internationally recognized photographers. On behalf of the Museum, they invite and selflessly arrange for a select group of photographers the luxury of living and working in one of the most spectacular and pristine settings on the planet. They ask and receive little in return, except satisfaction in meeting international artists and delighting in the synergy that leads to the creation of exciting new work. 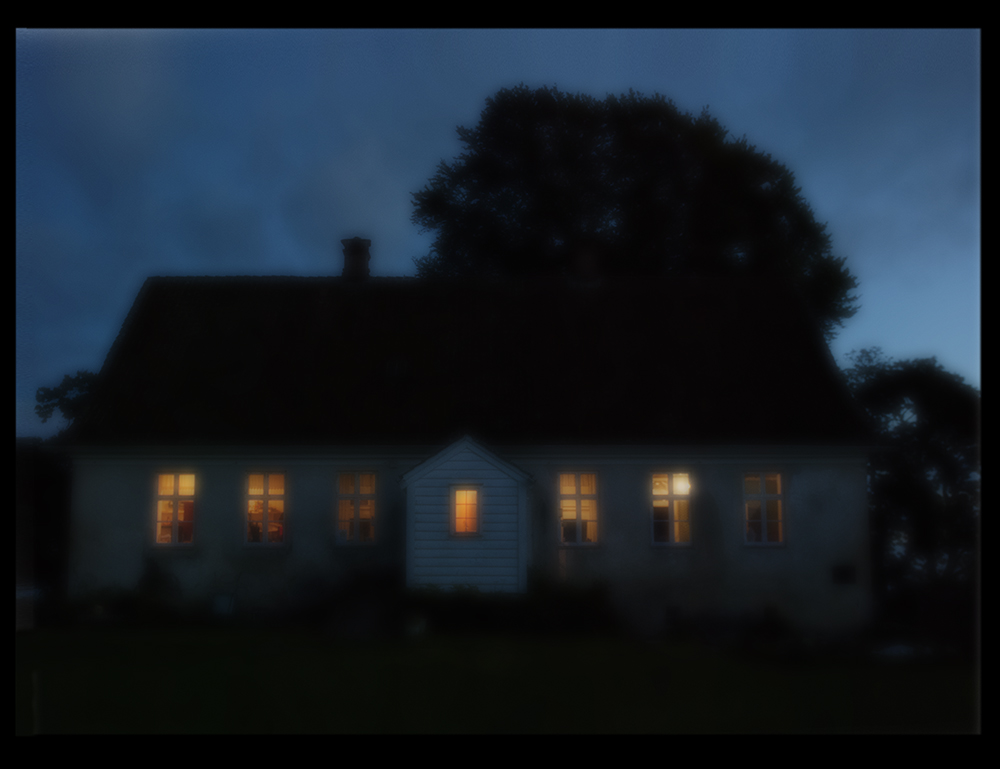 Initially, I intended to create a photo narrative based on a story/imagined memoir that I was developing. But over time, the story evolved and morphed. Instead, I created a series of individual dreamlike visual narratives that celebrated and recognized the paradox of light and shadow, hope and sorrow, youth and adult, present time and past, interior and exterior spaces. This new series, Midnight Sun, (not a precise nomenclature, as our island was further south in Norway) still resides within the realm of magic realism, my lifetime obsession, but my camera functioned more as a drawing tool as I depended less on post-process to create my photo constructions. Having access to many willing models and the stimulation of the incredible and, for me, unusual landscapes, I found my work expanding into a more contemporary vein. Each of the images still attempts to create a connection between reality and magic and the contradictions epitomized by light and its counterpoint, shadows. Some of these images are now available at Susan Spiritus Gallery and on my website, and some will be exhibited next year in Norway. 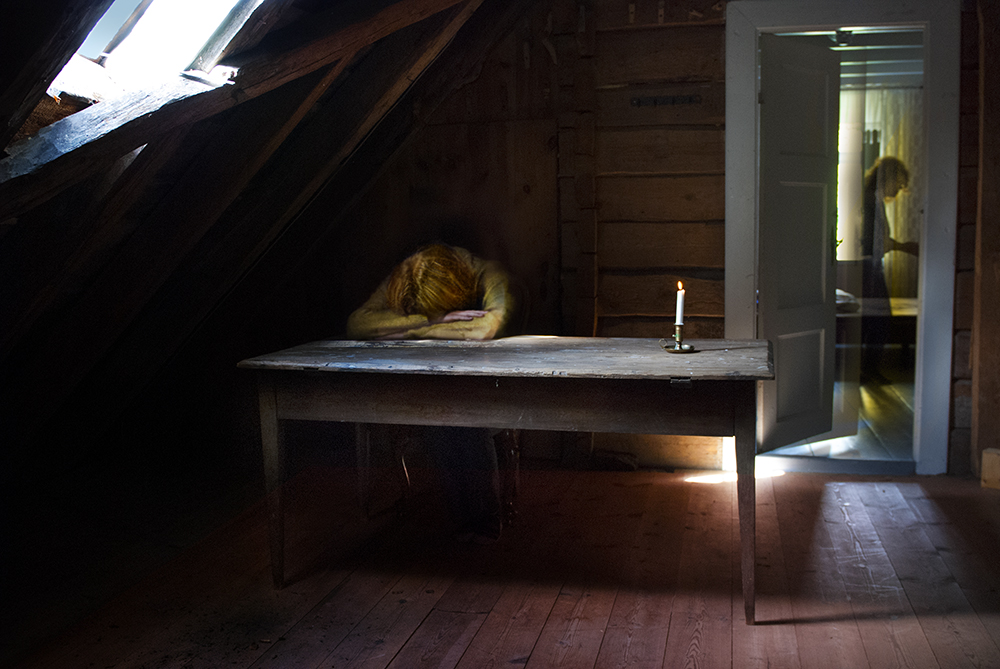 ©Fran Forman, In the Attic

Having three weeks of uninterrupted time to immerse myself in my art, to experiment, to try different approaches and to revive old ones, to fail, to try again, to breathe, dream, and live photography every minute (and most sleepless nights, too), to meet neighbors and students gracious enough to pose, to eat salmon and cheese daily, to breathe unpolluted air, to explore the forests and fields of moss and lichen, to discover that silence actually has a sound – this was a gift for which I am so grateful, a gift received at the end of a personally difficult year, and a gift I hope others will be able to enjoy. — Fran Forman 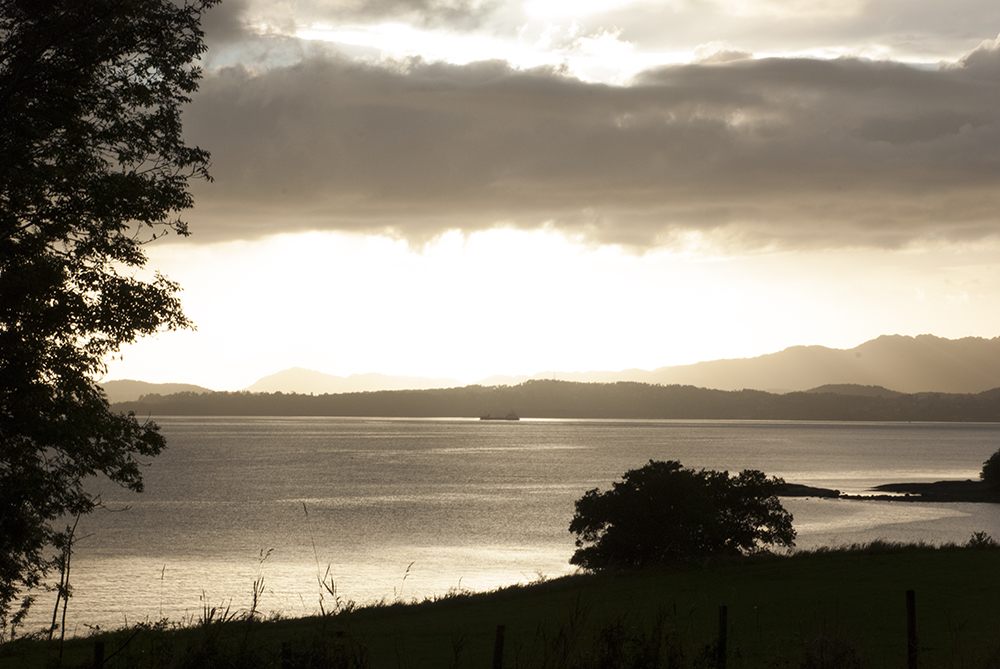 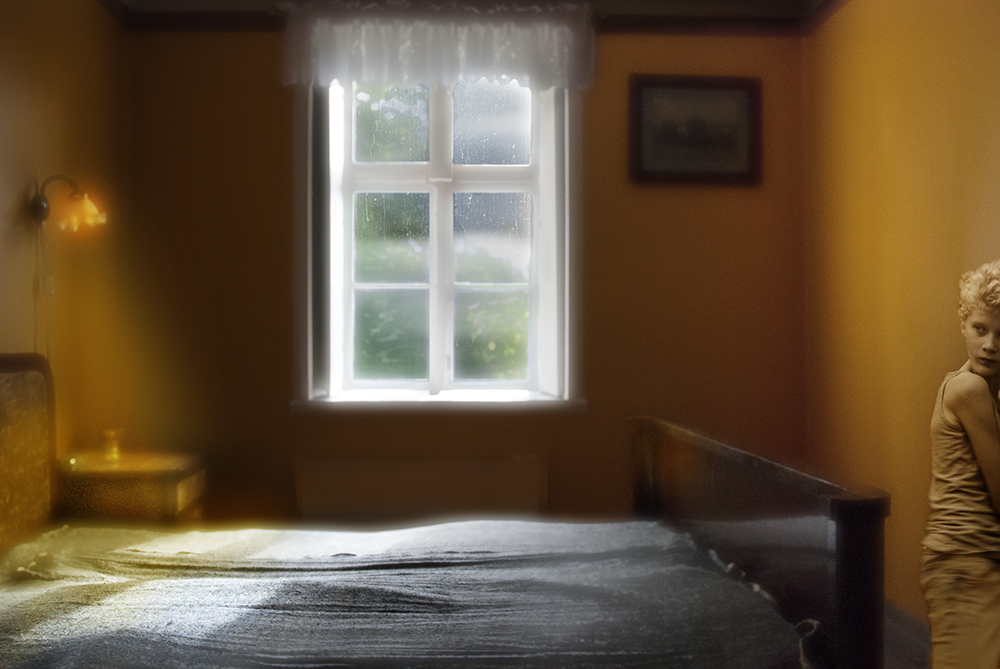 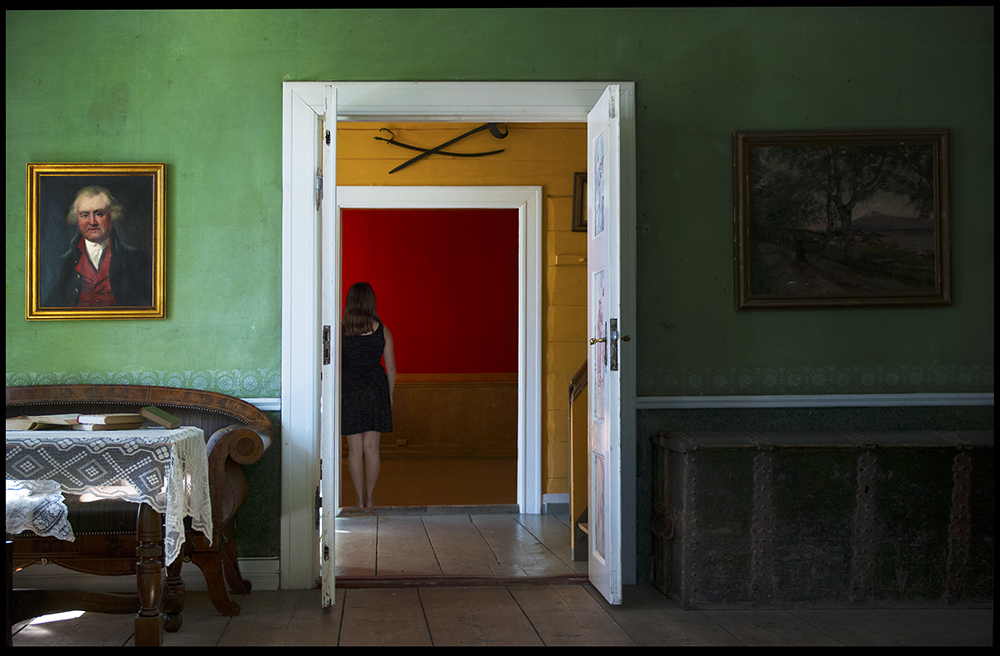 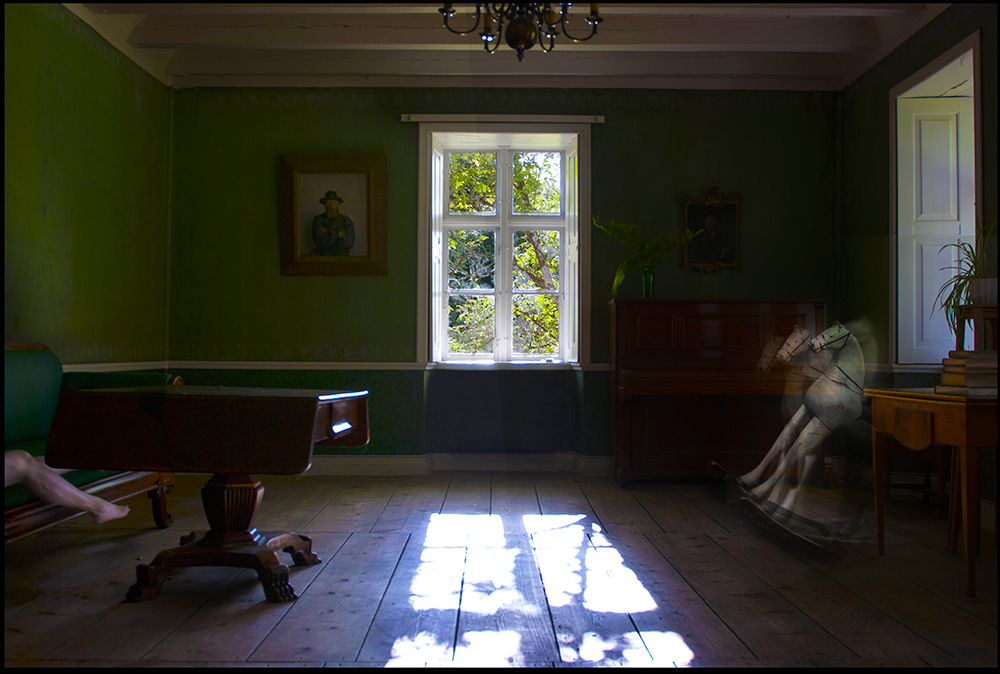 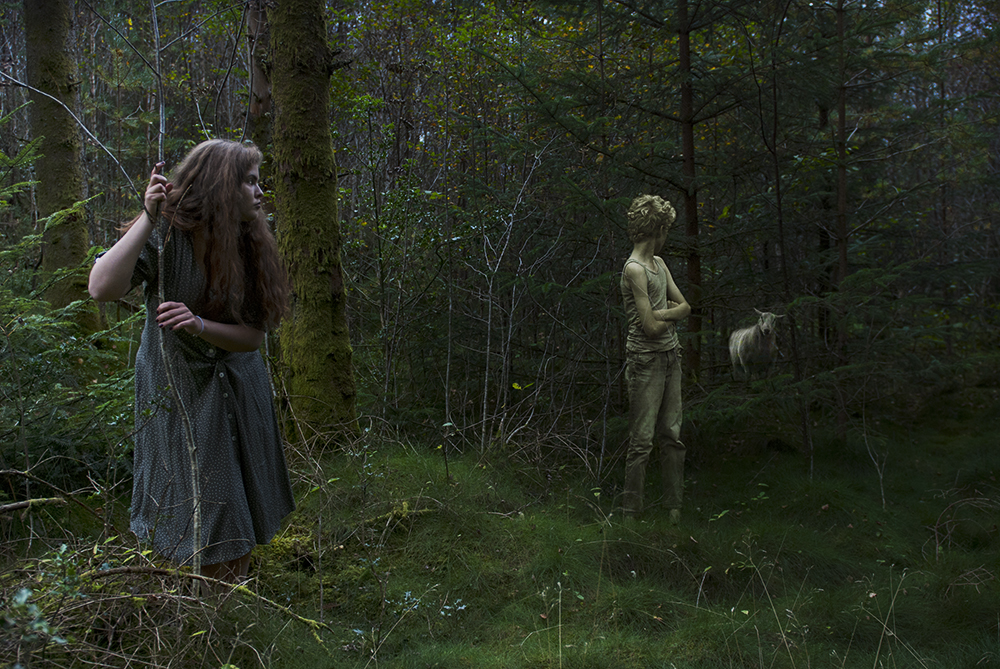 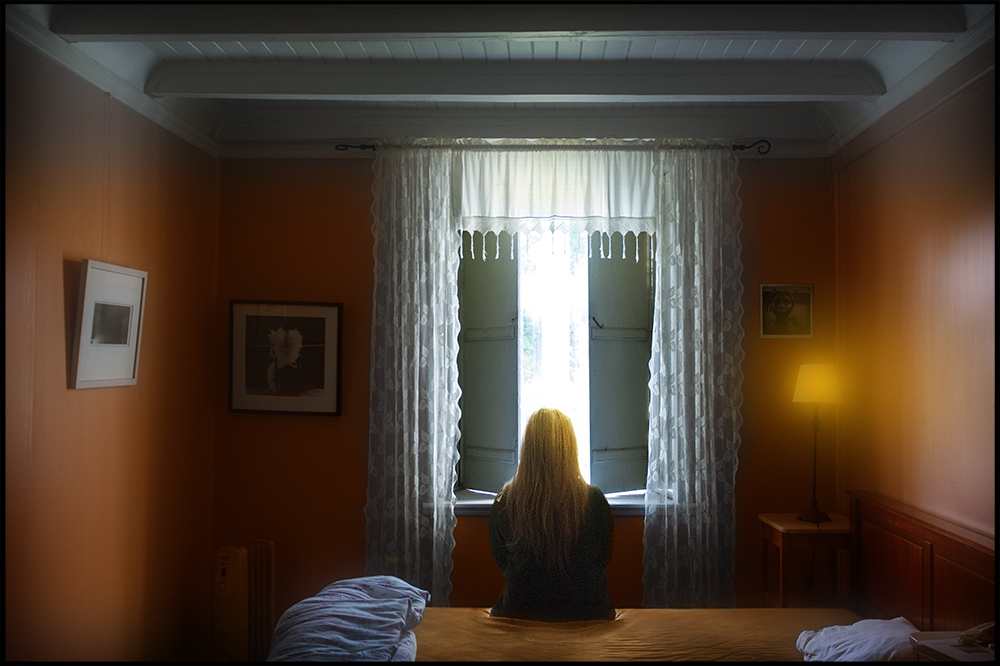 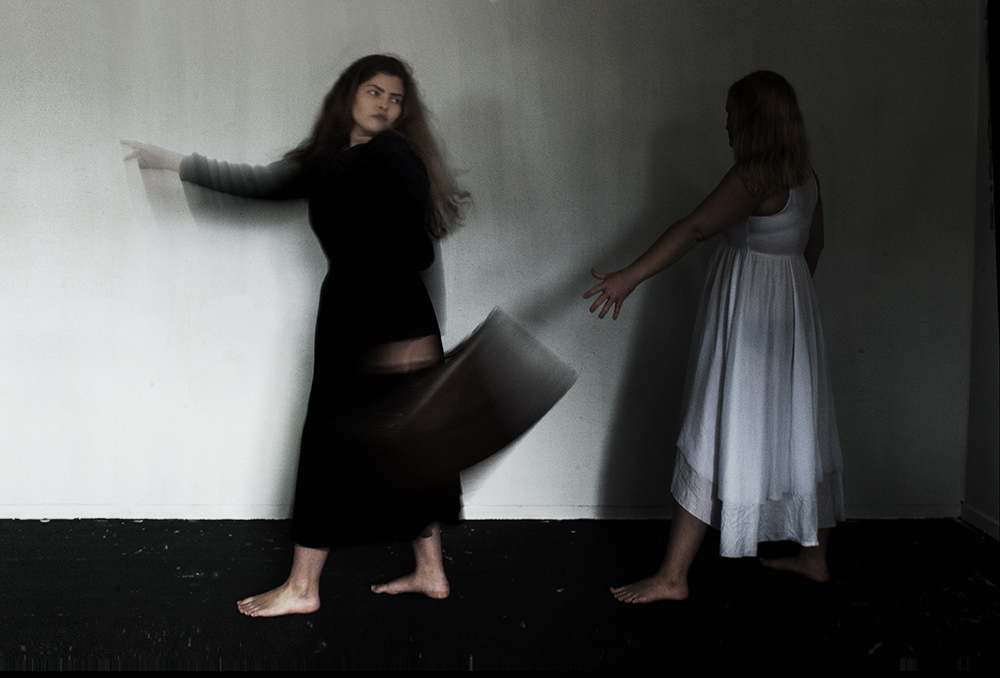 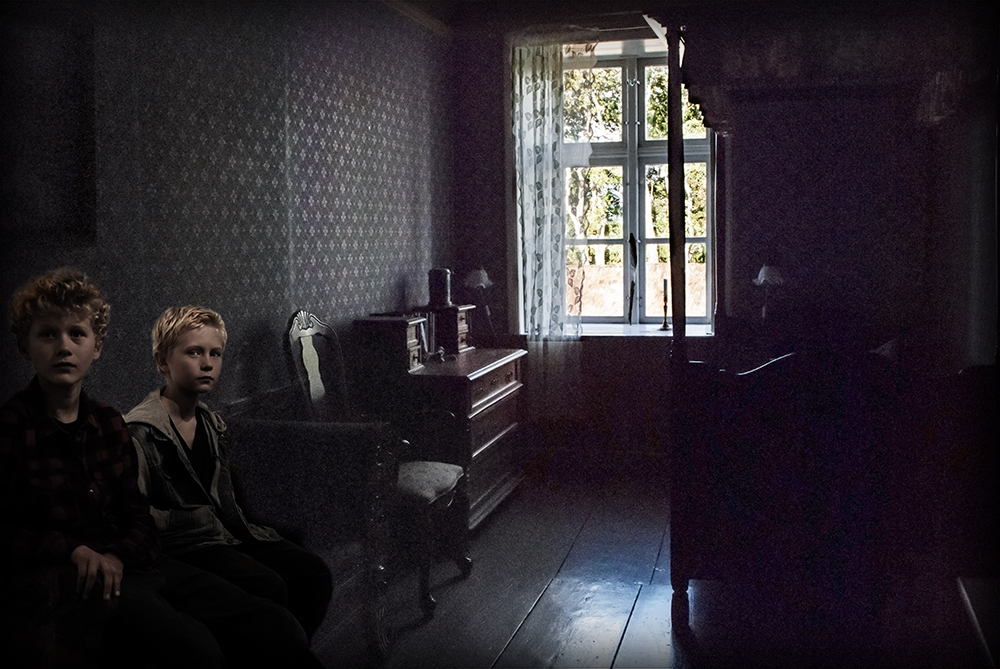 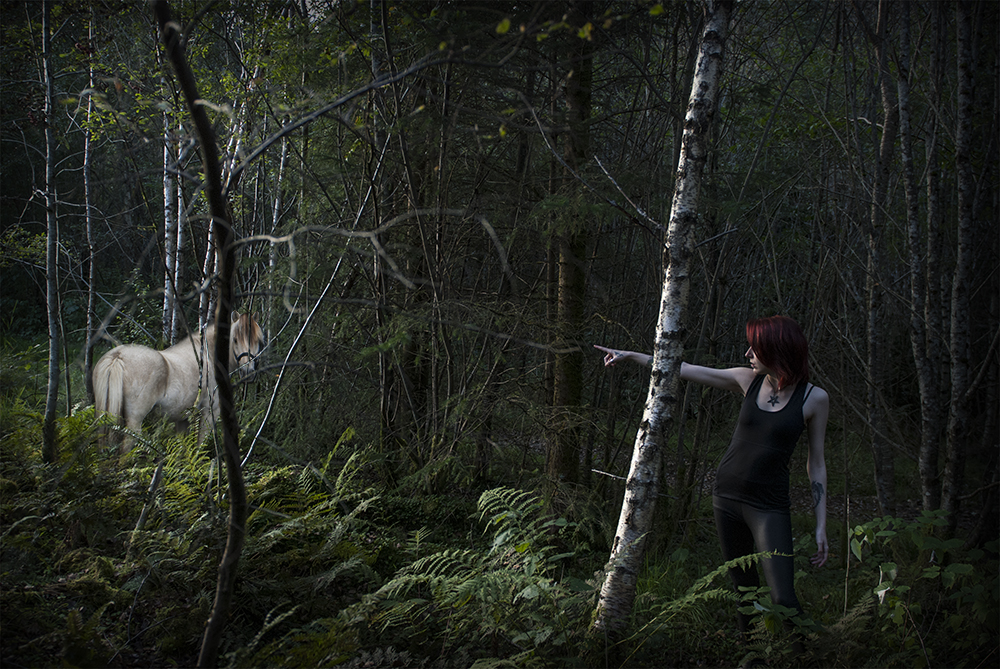 NEXT | Susan S. Bank: Piercing the Darkness >
< On Getting an MFA | PREV