Peter van Agtmael: Buzzing at the Sill by Aline SmithsonFebruary 21, 2017 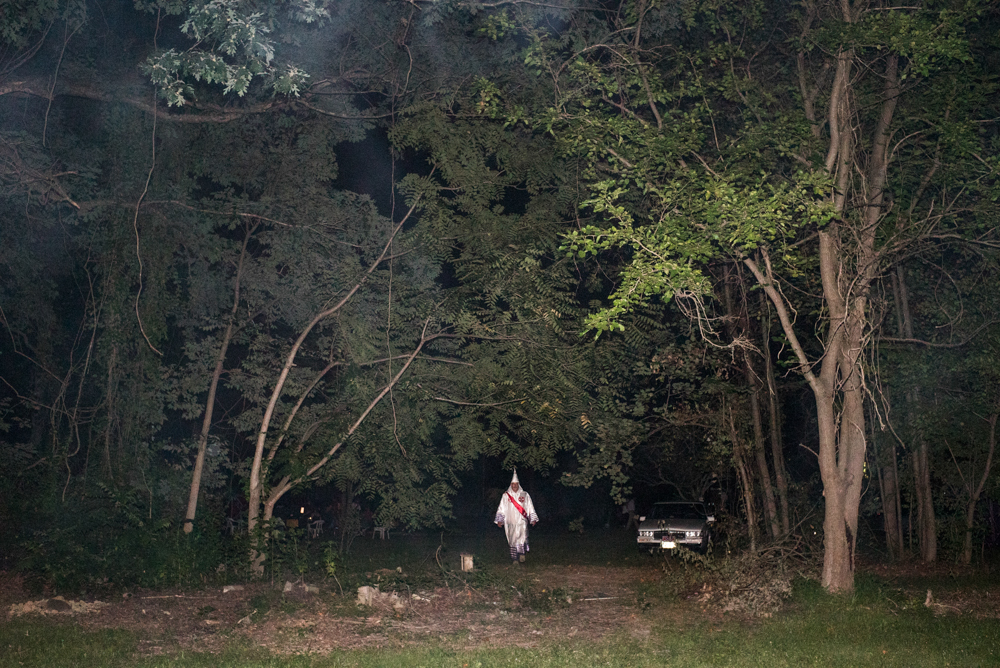 ©Peter van Agtmael, Maryland. 2015. The KKK had boasted that dozens from their Klan chapter would attend the rally and cross burning, but there were only a few people when we showed up, including a British TV crew and a freelance photographer. After a few vague excuses, the 6 or 7 Klan members changed into their robes and began a show amongst themselves. One of the leaders started his speech. He shouted that there were ISIS training camps being created by the United Nations with FEMA (Federal Emergency Management Agency) whose fighters would then take American’s guns away. This plan was allegedly hatched by Barack Obama (or Barry Soetoro as he was called by the Klan. Soetoro was the surname of Obama’s stepfather and that he was briefly called Barry Soetoro in elementary school in Indonesia has been used as evidence that Obama was not born in America). After finishing, the hoarse-voiced Klan member burned the UN flag and stomped on it, to the tepid cheers from the small crowd.

With the widespread uncertainty and fear over the increasingly exposed divisions in the United States, I hope this work can give perspective on the rarely seen corners of this dense, complex, and troubled nation. Moving through the vastness of America these past years has been deeply transformative, exposing me to tremendous beauty and generosity as well as staggering contradictions and fearfulness. – Peter van Agtmael

Peter van Agtmael’s new monograph, Buzzing at the Sill published by Kehrer, is a timely collection of images of a more challenged America, a sequel to his well-celebrated book, Disco Nights September 11th. Expanding on his work created during the wars in Afghanistan and Iraq from 2006 to 2013, and their impact back home, Buzzing at the Sill, shows us a country in flux, a country in crisis, and more importantly, a country in need of better days. Created long before the election (2009-2016), the book speaks to an almost surreal and ailing America, suffering from isolation, neglect, boredom, prejudice, and loss. It’s a heady offering of powerful images and an important capture of contemporary America.

Peter van Agtmael was born in Washington DC in 1981. He received a BA in History from Yale. Peter joined Magnum Photos in 2008 and became a member in 2013. Awards include the W. Eugene Smith Grant, the ICP Infinity Award for Young Photographer, the Lumix Freelens Award, the Aaron Siskind Grant, a Magnum Foundation Grant, as well as awards from World Press Photo, American Photography Annual, POYi, The Pulitzer Center, The Center for Documentary Studies at Duke University, FOAM, and Photo District News.

Disco Night Sept 11, his book on America at war in the post-9/11 era, was shortlisted for the Aperture/Paris Photo Book Award in addition to being named a Book of the Year by The New York Times Magazine, Time Magazine, Mother Jones, Vogue, American Photo and Photo Eye. Buzzing at the Sill, his new book about America in the shadows of the wars will come out in February 2017. It was named to Time’s “Best Photobooks of 2016″ list. 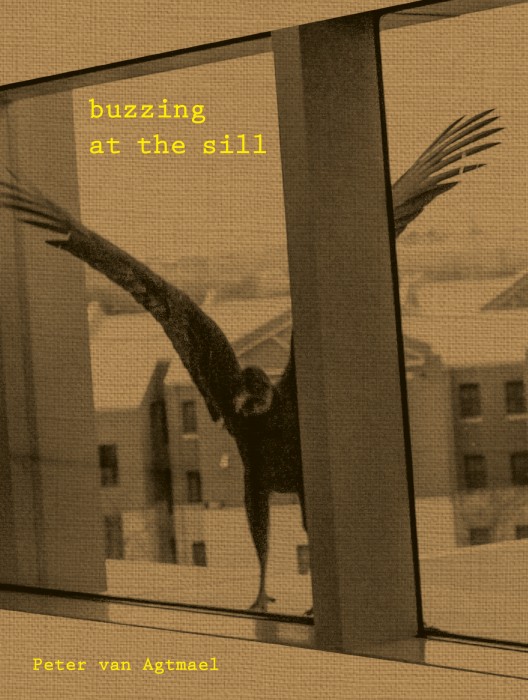 Buzzing at the Sill looks at the United States from 2009-2016, moving unsentimentally and sometimes surreally through images of race, class, war, place, torture, nationalism, family, and memory. There is detailed text that gives the pictures a deeper context. With the widespread uncertainty and fear over the increasingly exposed divisions in the United States, I hope this work can give perspective on the rarely seen corners of this dense, complex, and troubled nation. 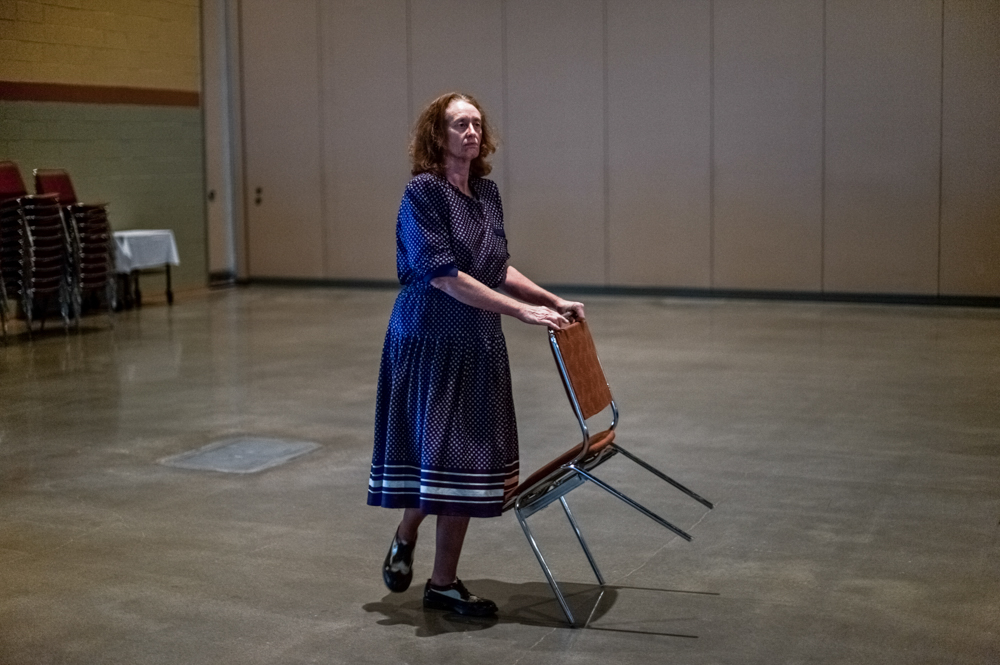 ©Peter van Agtmael, Des Moines, Iowa. 2010. At the annual Iowa GOP Ronald Reagan dinner Sarah Palin gave the keynote speech, which was seen as testing the waters for a possible presidential run. She savaged Obama; both for his pacifism (withdrawing American troops from Iraq) and his militarism (ordering the surge in Afghanistan). She praised the armed forces, while attacking the press (“people who are out there for the right of journalists to lie”). 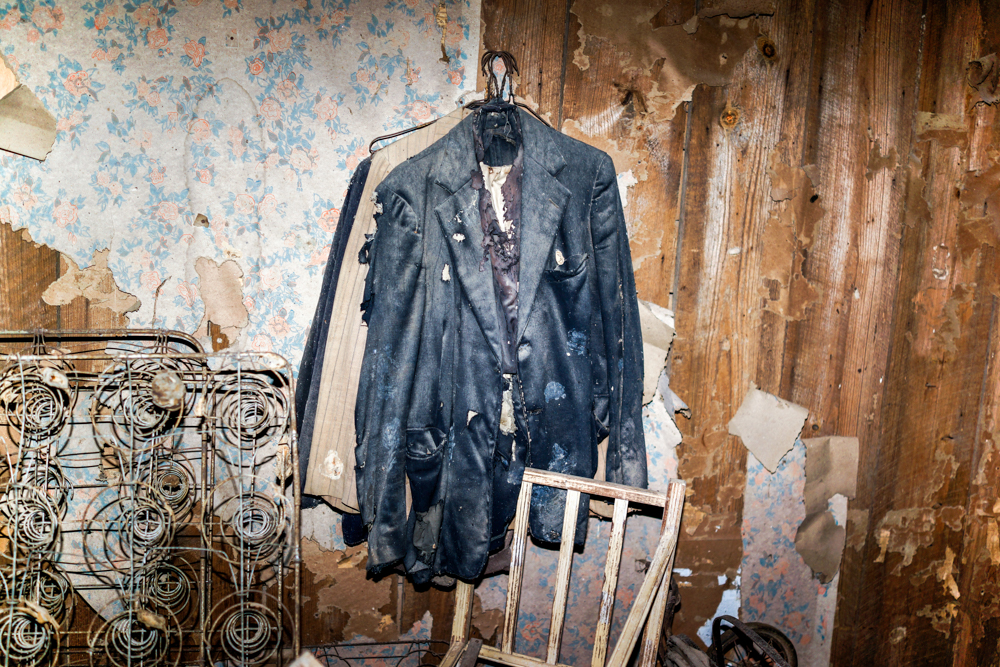 ©Peter van Agtmael, Hugo, Oklahoma. 2014. The remnants of a Choctaw allotment after their forced expulsion to Oklahoma. The Choctaw Tribe initially had vast territories in the Southeast United States. By the early 1800’s, the American government had begun a systematic, legislated removal of the Natives from their land. In 1830, the Indian Removal Act was passed by Congress and led to the exodus of tens of thousands of Native Americans. The majority of the Choctaw were forced to march 800km to modern Oklahoma, watched over by white militias. In the last major removal, in 1838, the remaining people of the tribes were rounded into camps and then pushed west in groups of 700 during the hottest and coldest months of the year. Up to a third of them died. It became known as the “Trail of Tears.” 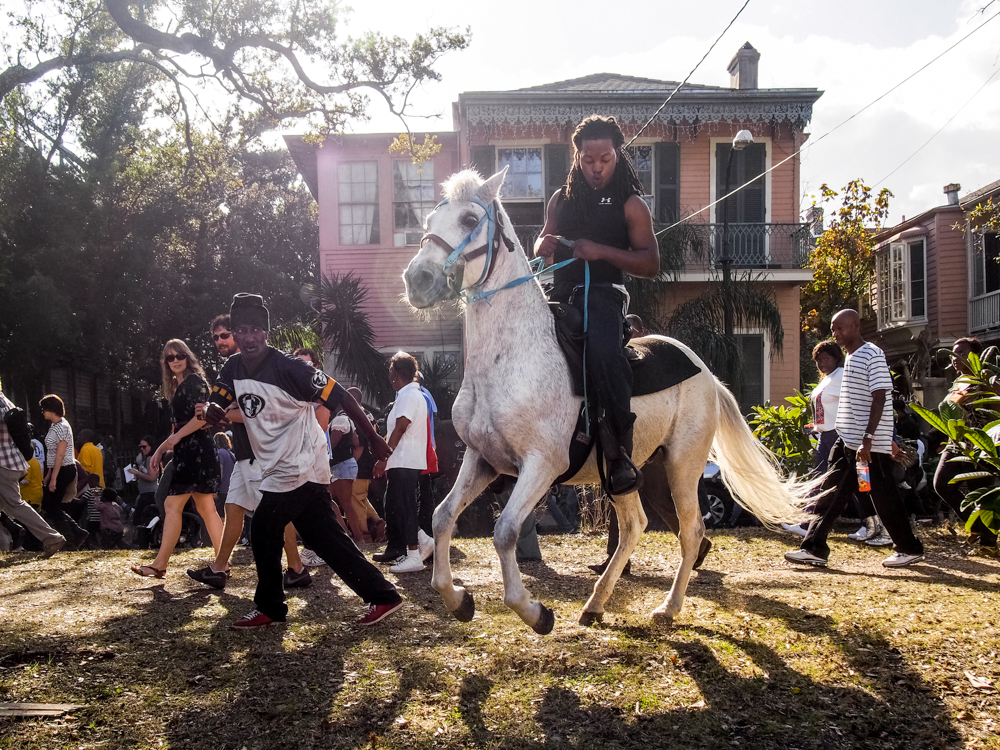 ©Peter van Agtmael, New Orleans, Louisiana. 2012. A Second Line Parade. A local African American tradition where brass bands – known as the first line – march in the streets and are joined by members of the public – called the “second liners.” The Second Line parades came about after the Civil War because insurance companies wouldn’t cover ex-slaves. So African Americans formed benevolent societies and clubs that helped members defray health costs. The dues included a band for funerals and a public parade every year. Over time, their popularity evolved, and now there are parades almost every Sunday in New Orleans. 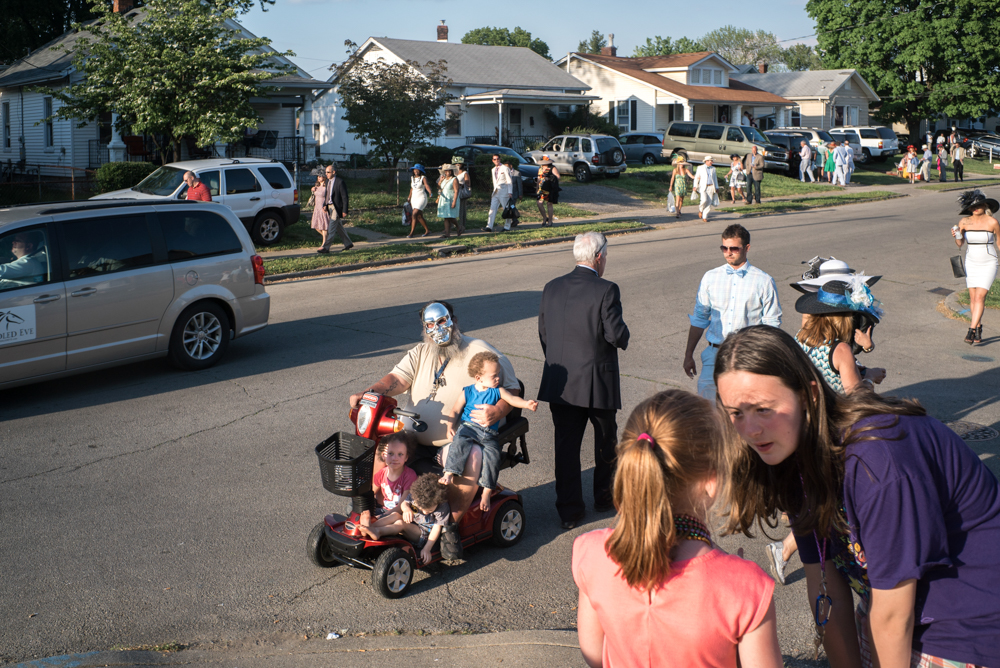 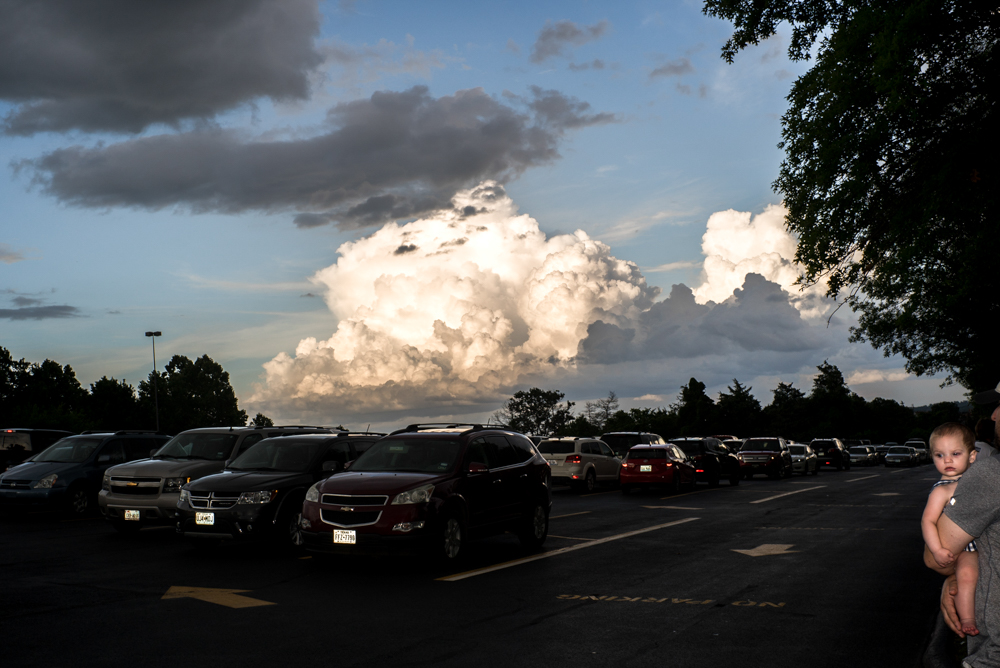 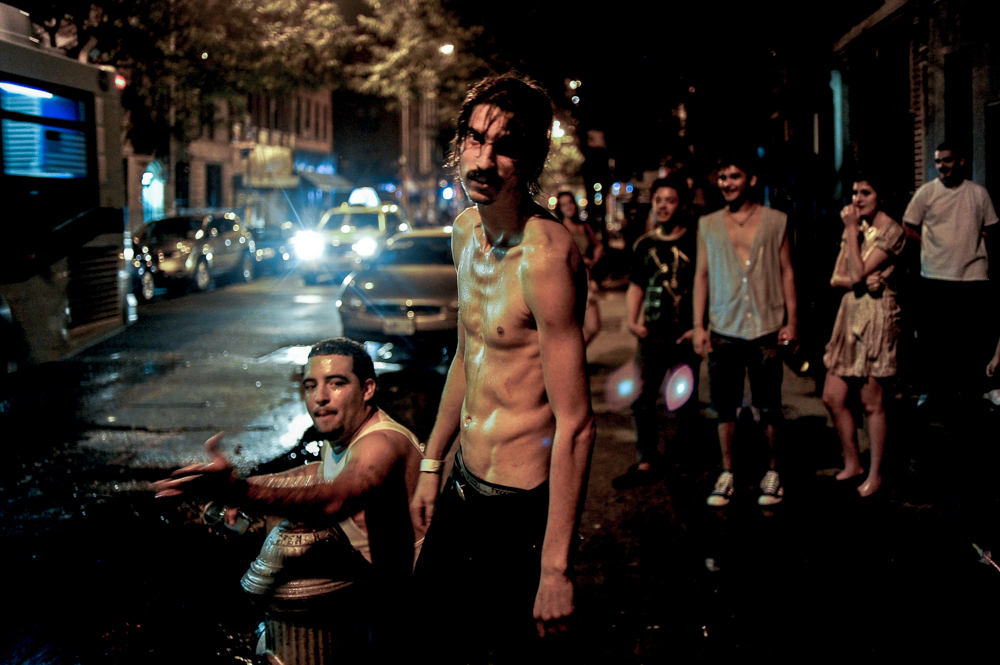 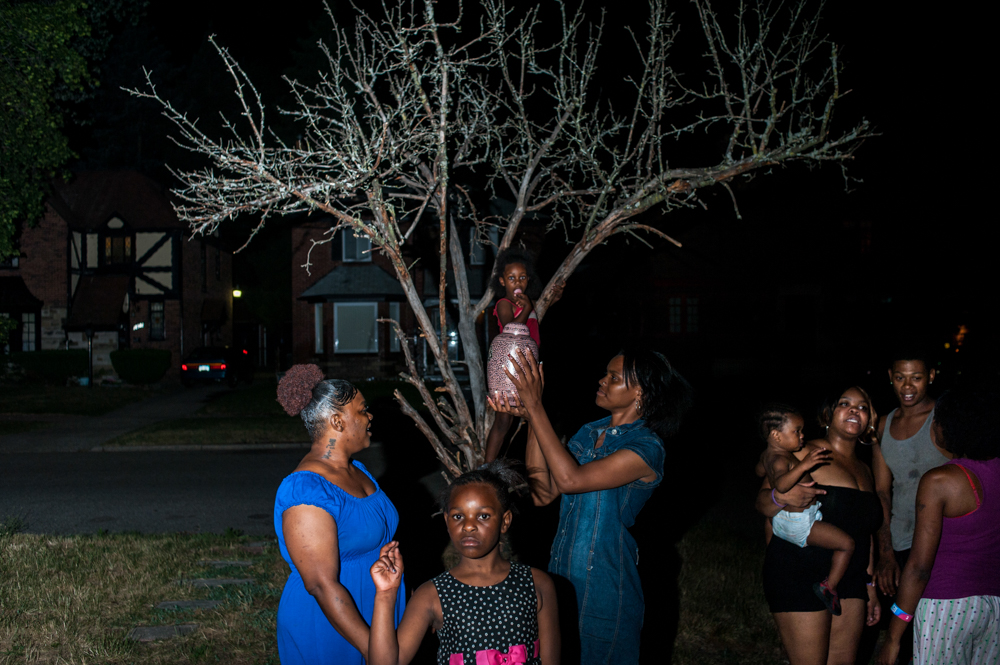 ©Peter van Agtmael, Detroit, Michigan. 2012. Outside Lyniece Nelson’s house. The family was still in shock over Treasure’s death. One of her sisters said “I don’t know if Treasure is asleep, or up. Because her pictures… every time I move around… they look like they are following me. She woke mama up to tell her she was leaving, she left… and that’s it.” 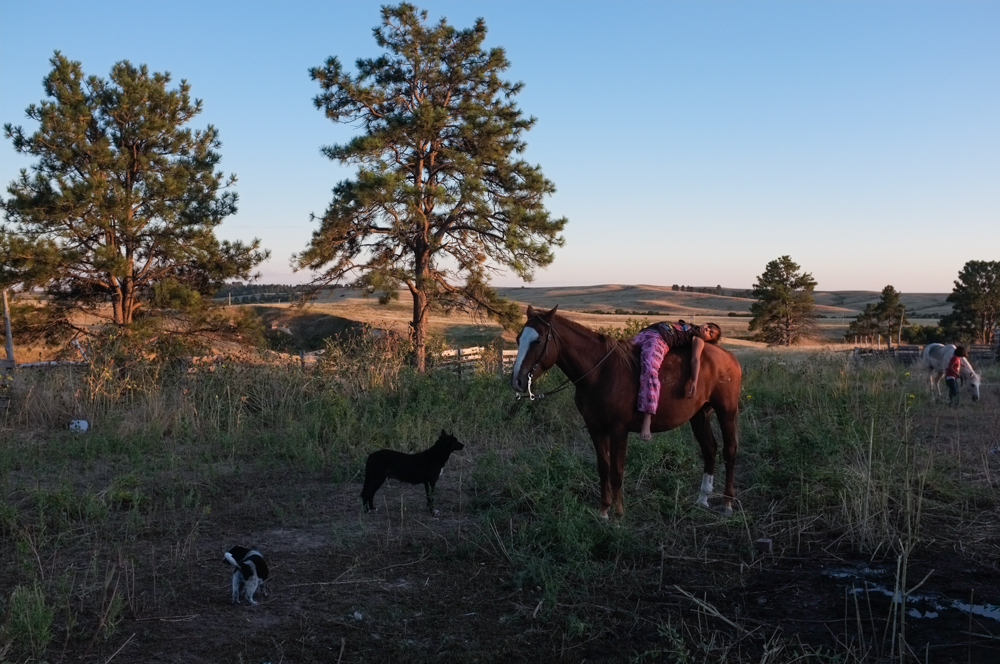 ©Peter van Agtmael, Pine Ridge, South Dakota. 2011. While on a road trip with my friend Justin, we met a couple of guys and started chatting. They invited us to check out a spot where they had a rope swing, and on the way we picked up some beer. Dusk was falling and it became a little party, we lit a fire while some of their younger cousins swung over a deep chasm, with just a thin rope around their waist to secure them to the tree. As the beer ran out and the night began to get colder, they invited us back to their home. Upon arrival, their sister (the matriarch of the family) smelled their breath and became furious. She asked us what possessed us to give them beer. She told us there was rampant alcoholism on the reservation, and declared we were just another in a long line of white men exploiting the Lakota. We were filled with tremendous shame and apologized profusely. As she explained the history of the tribe she mellowed and invited us to spend the night. We awoke in the morning to a beautiful dawn, and the youngest children tending to the horses. 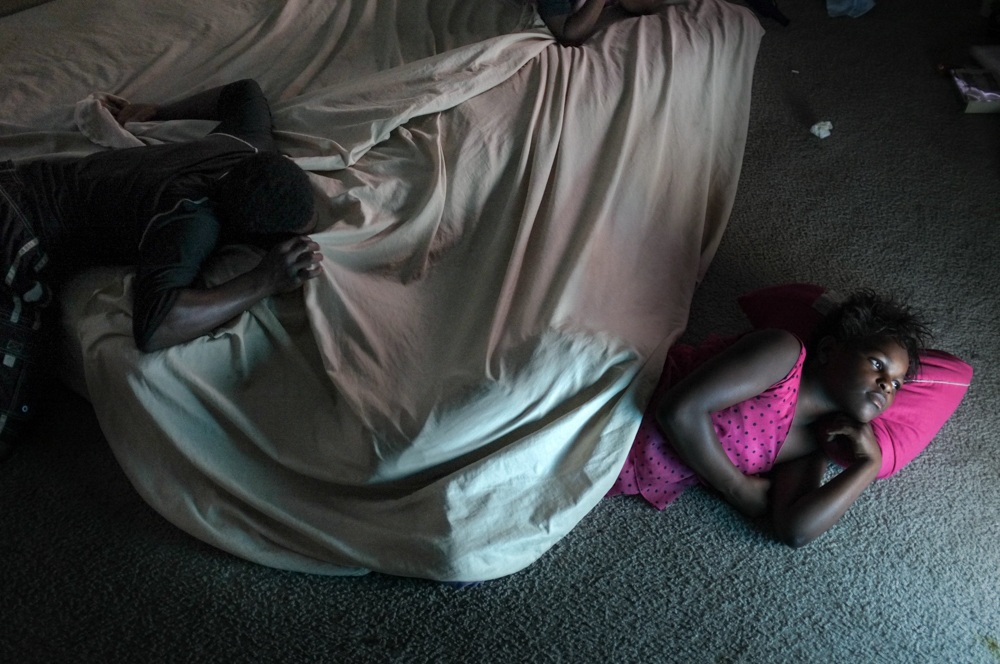 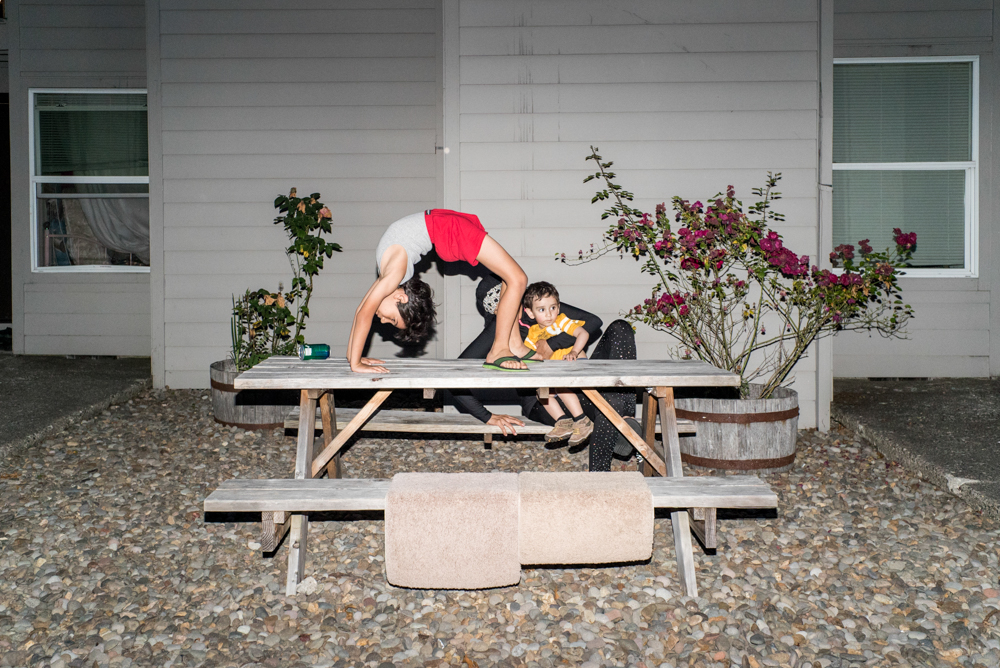 ©Peter van Agtmael, Portland, Oregon. 2015. Iraqi refugees in a low income housing community in Portland. The area is home to several thousand Iraqi refugees. One of the main community organizers is Dr. Baher Butti, who fled Baghdad in 2006, after his community activism made him the target of local militias. A psychiatrist, activist and writer, Dr. Butti spends much of his free time helping the recent immigrants adapt to life in America. Many of them don’t speak much English and don’t understand their rights within the web of bureaucracy. Although he is constantly overworked, he sees it as his responsibility to help his people get on their feet as fast as possible.