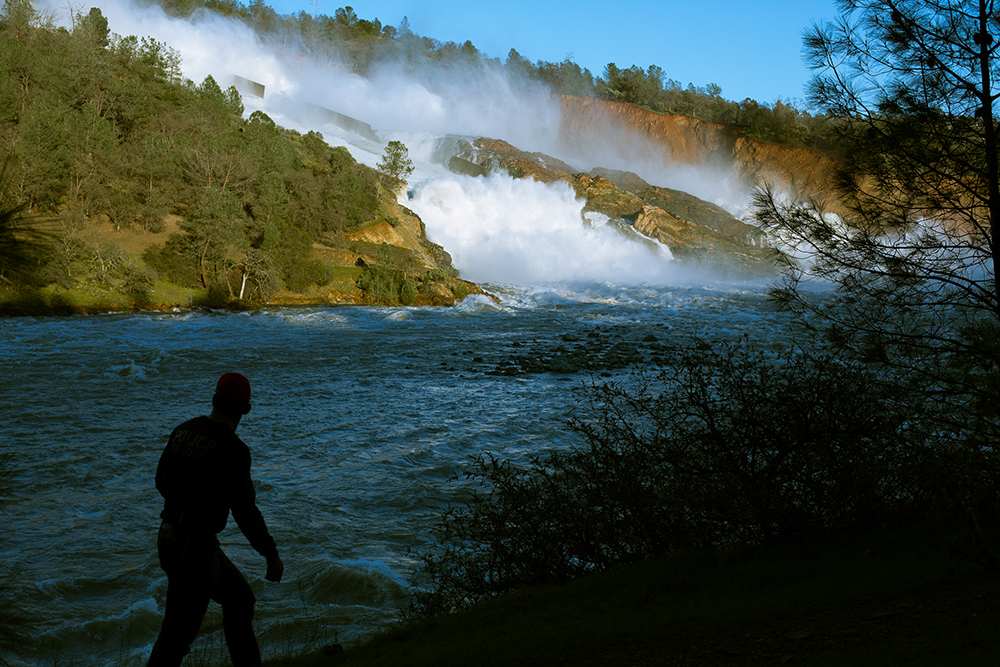 ©Nathan Weyland, Excess water from a record winter cascades over the Oroville Dam emergency spillway, used for the first time in the dam’s history, and into the Feather River. February 11, 2017.

Nathan Weyland’s long-term commitment to investigating California’s water scarcity issue has helped him create a project of great depth and understanding. There are few, if any, more important issues in California than the water supply, and Weyland’s work connects viewers with the wide range of people who are influencing water policy, and whose lives are most directly affected. – Blue Earth Alliance

Nathan Weyland is a 16-year resident of the Bay Area with a bachelor’s degree in photojournalism from San Francisco State University. He works on freelance assignments and personal projects centered around environment, health, infrastructure, agriculture, and adventure. 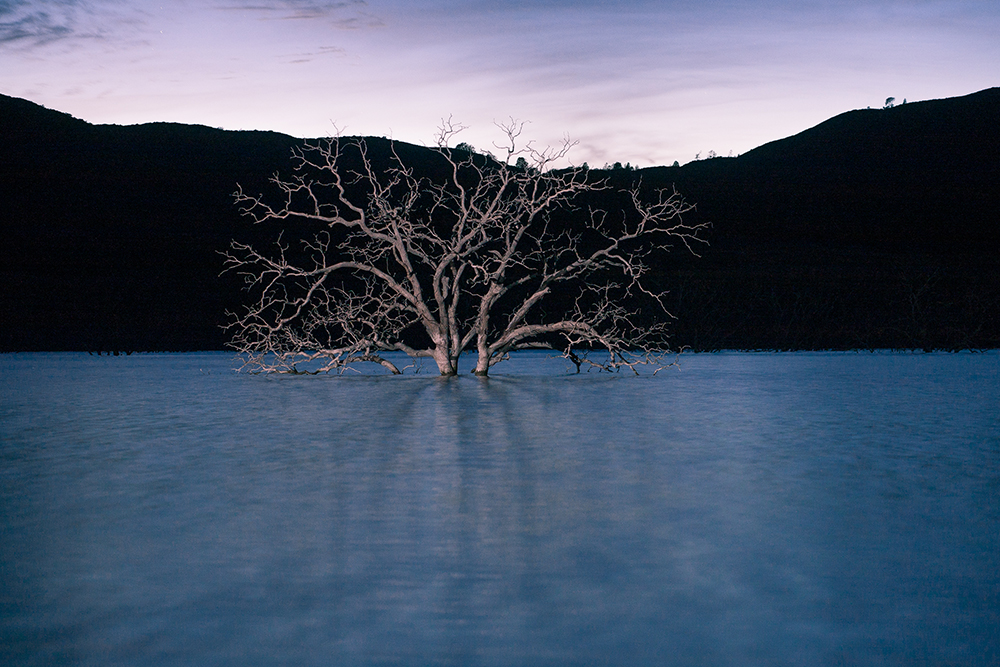 ©Nathan Weyland, A tree rises from the bottom of Indian Valley Reservoir in rural Lake County, CA. Indian Valley is one of many reservoirs too low and stagnant to support recreation, one of many benefits listed as justification for the reservoirs’ construction.

California’s drought began to make the headlines during my last semester at San Francisco State University. I skipped my graduation ceremony and hopped a train to Fresno. There, aside a dusty reservoir, agriculture workers gathered and protested to protect their livelihoods. That was 2008. Since, and throughout my professional career, I have documented the complex inter-play of labor rights, agribusiness, small business, state subsidies and environmental science that shapes Californian’s access to water. The problem began with the dream: a dream of the American West in which California—the gleaming, central jewel—provided land, with rich, deep soil and few to no pests, in which anything could grow, all year long. Just add water. – Nathan Weyland 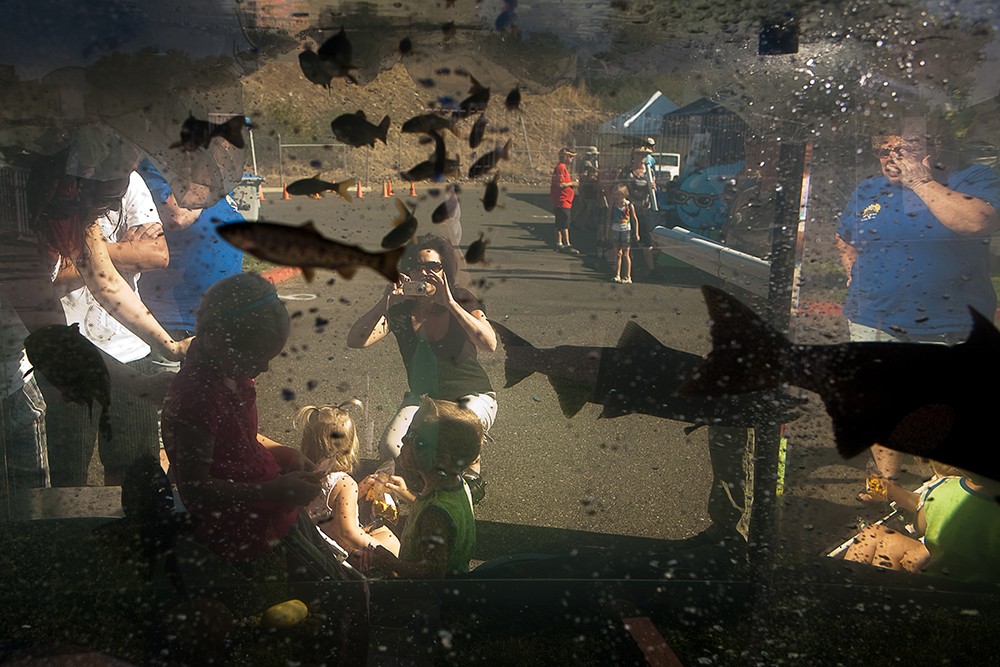 ©Nathan Weyland, Children pose for a picture in front of a mobile aquarium during the 2009 Salmon Festival at the Feather River Fish Hatchery in Oroville, CA. Species such as salmon and steelhead have become symbols of the environmental and conservation movements, which are in turn mocked by the agricultural industries through slogans such as “fry a fish, feed a farmer.” 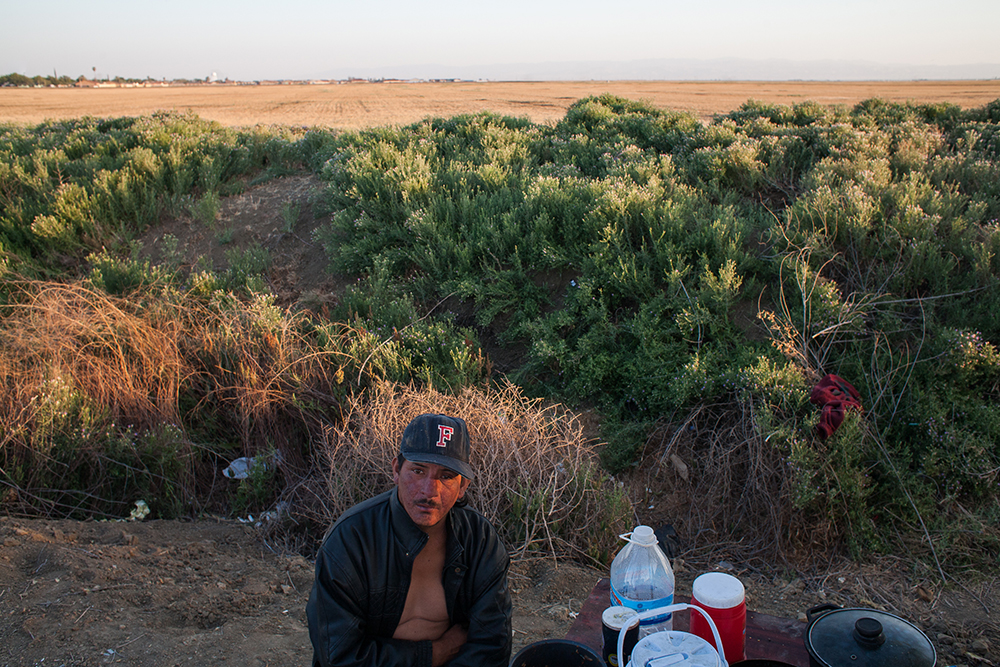 ©Nathan Weyland, Farmworker Salvador Gonzalez Victorian in a dry irrigation ditch near Mendota, CA, which he called home. Victorian and his colleague (not pictured) were living off the grid in May 2009 for lack of work. Average documented unemployment in the region was 36.5 percent, primarily due to lack of water and the subsequent layoffs of labor in farm and other industries, according to a report by the Fresno County department of public health. May 20, 2009. 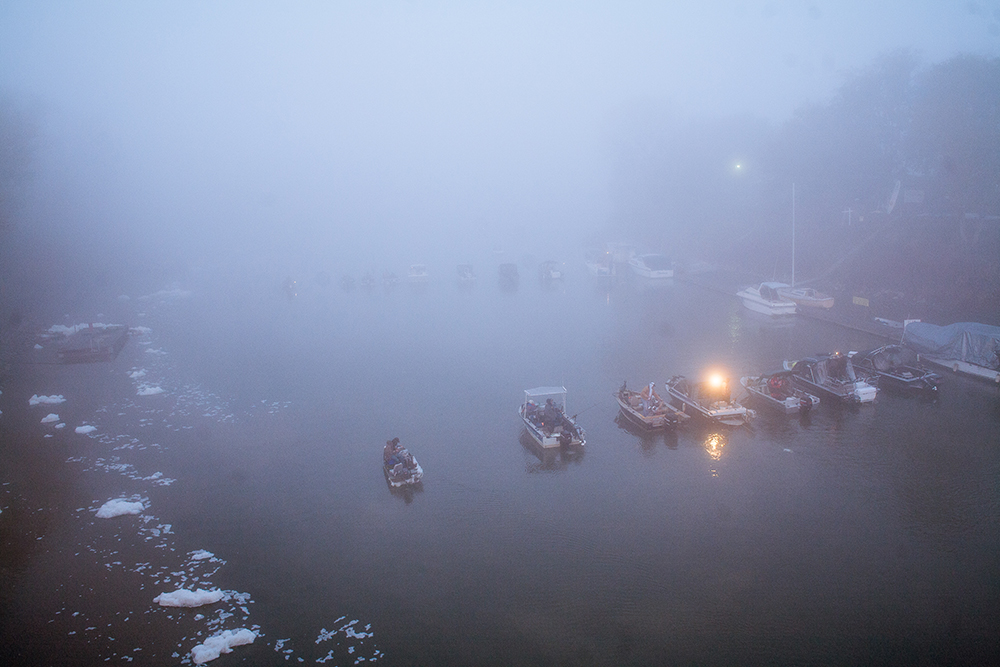 ©Nathan Weyland, Sport fisherman are up early for the brief salmon season on the Sacramento River. The commercial Salmon fisheries were completely closed in 2008 and 2009, and the sport fishing season lasted just 2 weeks in 2009 due to badly depleted salmon runs. 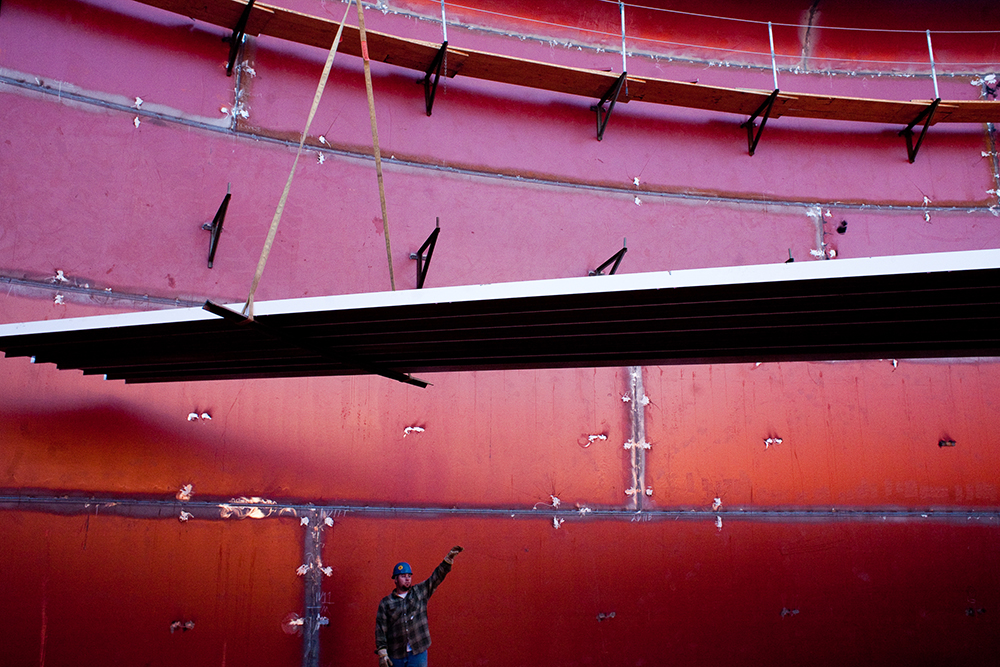 ©Nathan Weyland, Construction of a new water tank in South Yuba City sought to address concerns of decreasing groundwater quality in the area by providing storage for water from the State Water System, which is sourced primarily from the nearby Feather River. 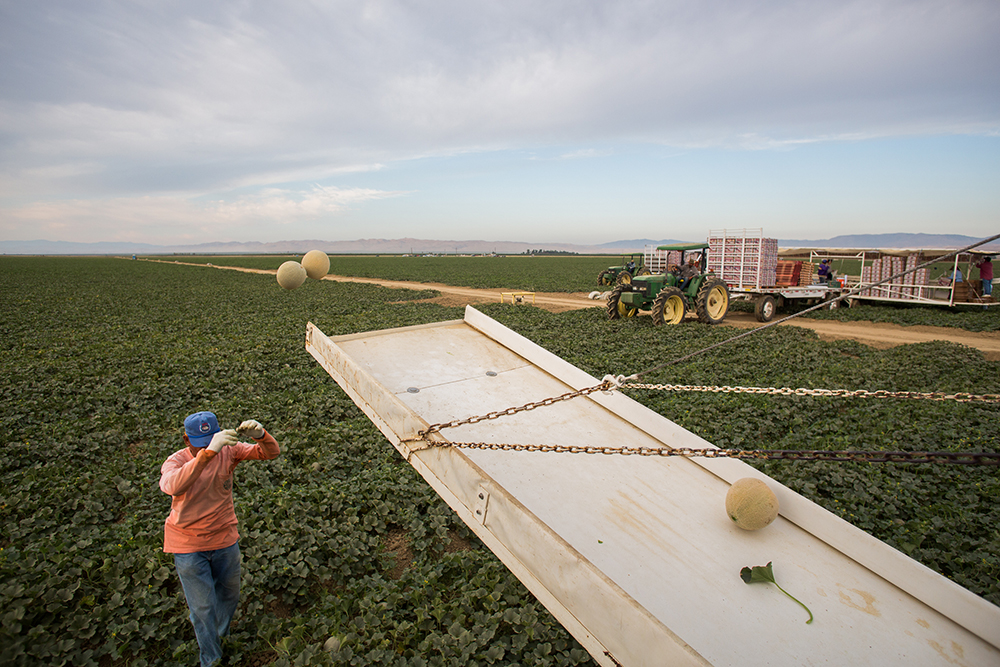 ©Nathan Weyland, Picking cantaloupes outside of Firebaugh, CA, the heart of melon country. California produces over 60% of the cantaloupes grown in the United Sates, and more than two-thirds of those come from this stretch of farmland in the southern San Joaquin Valley. 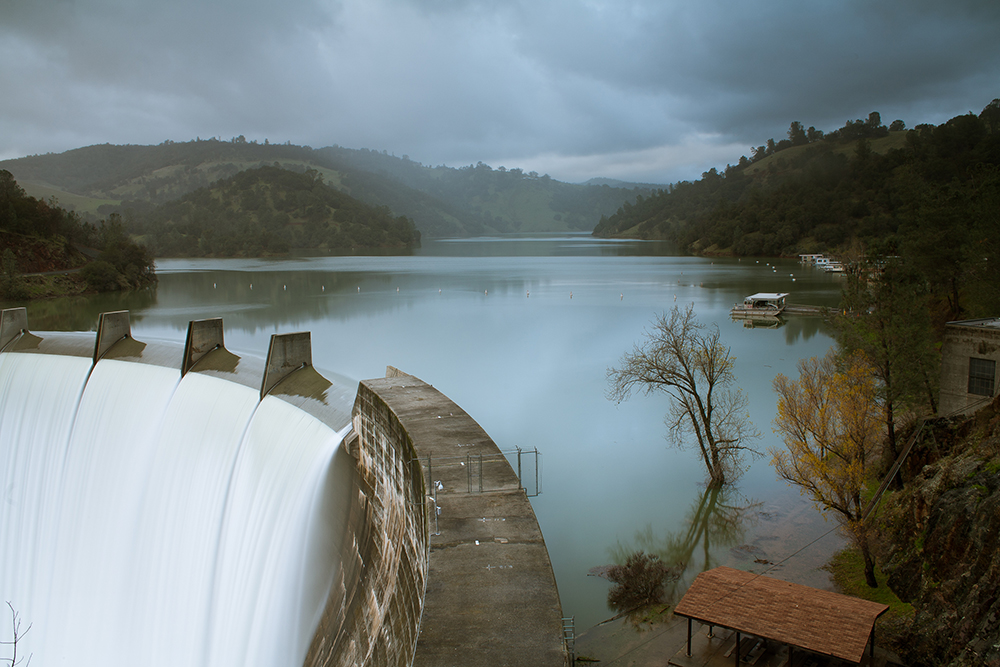 ©Nathan Weyland, Englebright Dam along the Yuba River spills 8200 cubic feet per second over its lip during early heavy storms in Northern California. Wet winters, like what many are predicting for later this year, slow progress on conservation and provide a false sense of water security. 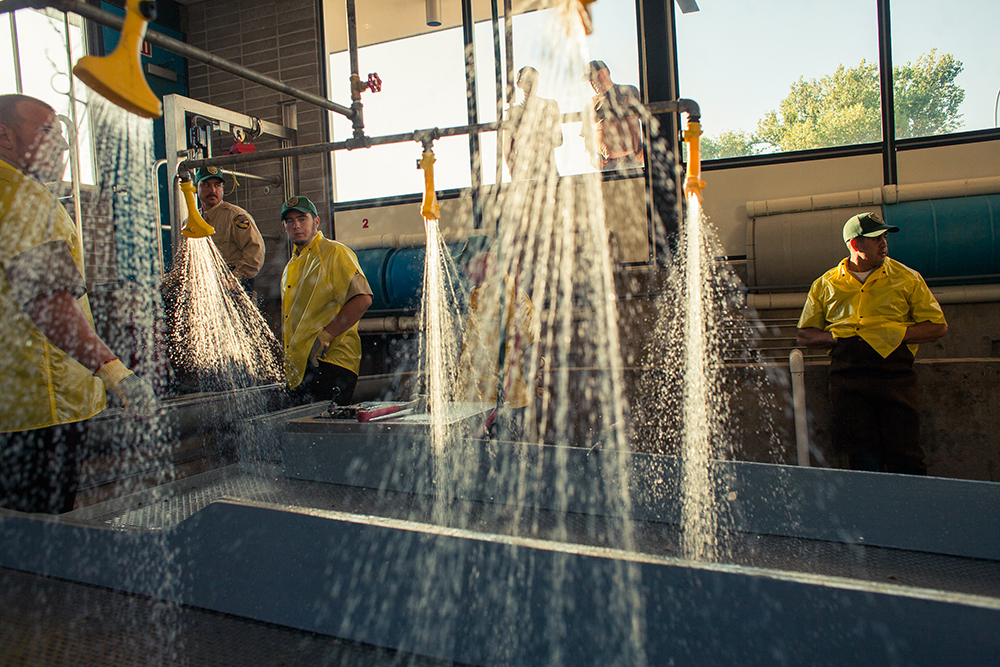 ©Nathan Weyland, Employees of the Feather River Fish Hatchery wait for a holding tank to be filled with fish before beginning salmon spawning operations. Due to the decline in fish stocks, hatcheries do nature’s work by killing, harvesting and incubating eggs until the fish are hatched and large enough to be released to the wild. Studies have shown significant biological and behavioral differences between wild fish and hatchery fish. 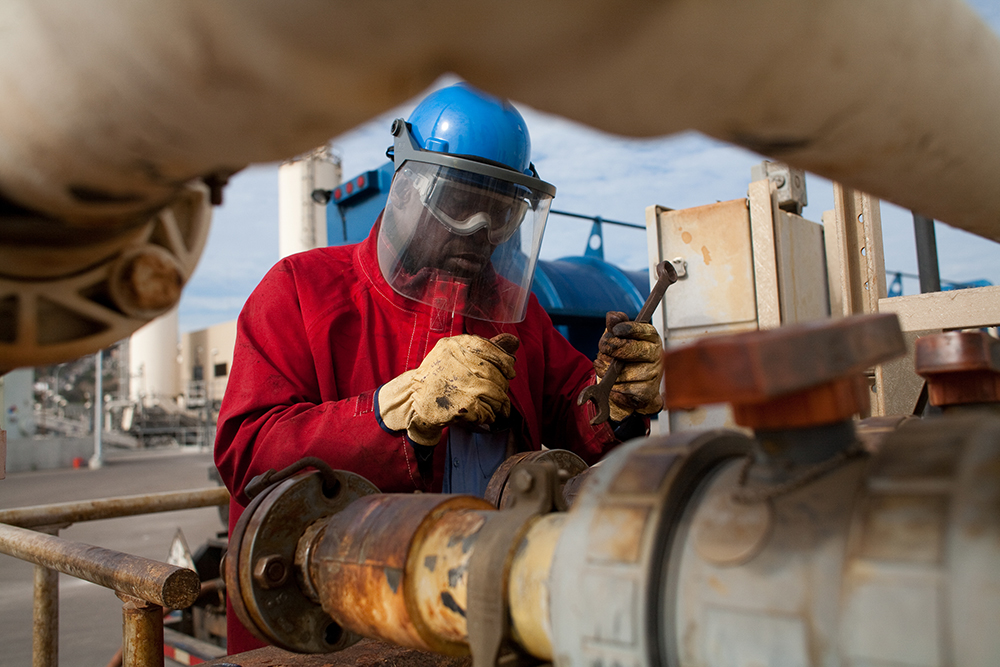 ©Nathan Weyland, A secondary plant under construction at the International Boundary and Water Commission’s wastewater treatment facility will treat waste water in a biological process in addition to the chemical process currently in use. Curtis Howard unloads Ferrous Chloride, used in the chemical treatment process of the primary plant. 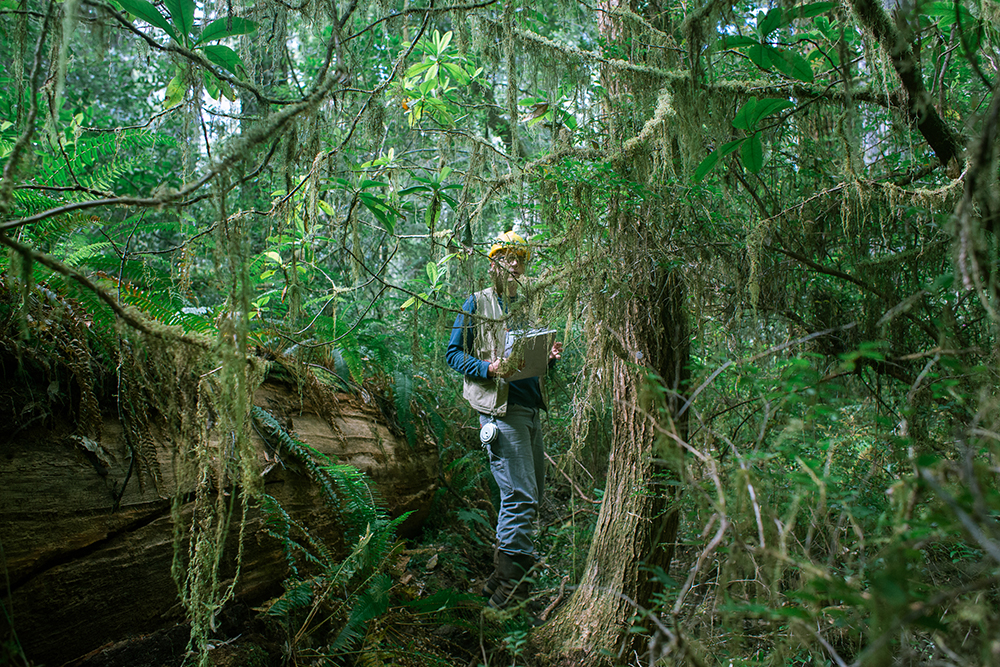 ©Nathan Weyland, Zach Wenderott, 29, and Laura Lalemand, 36, are biological technicians with the United States Geological Survey’s Redwood Field Station in Arcata, CA. They both work with USGS field ecologist Philip van Mantgem, who is conducting a long-term study of tree mortality and demographics throughout the West. A goal of the project is to learn how to better manage forests for tree health. 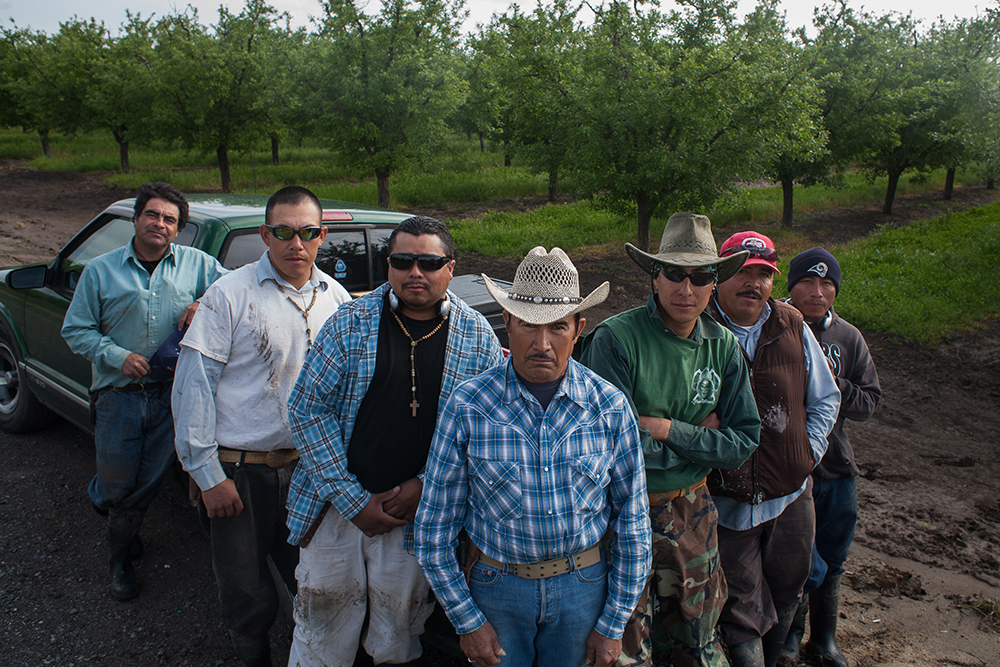 ©Nathan Weyland, Field workers for Half Moon Fruit Company, in the shadow of the Sutter Buttes in the Sacramento Valley, pose for a portrait before heading out to train the branches of plum trees in anticipation of the spring bloom. Sutter county is known for stone fruit, rice and almonds. Nearly all the plums produced in the United States come from this region of California. 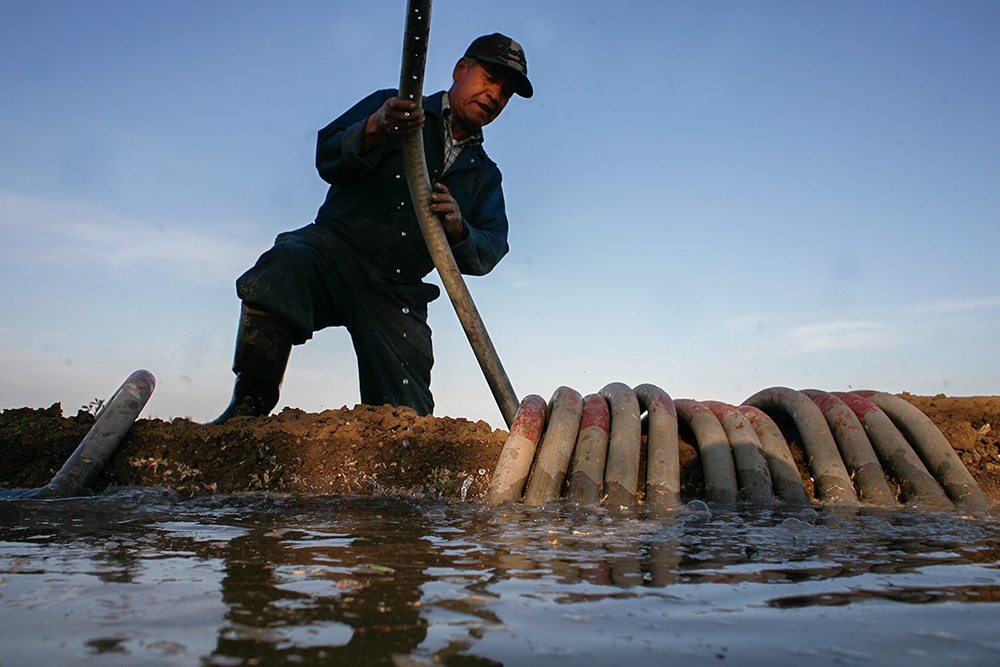 ©Nathan Weyland, Pedro Garcia moves siphon tubes to flood irrigate a field of alfalfa near Discovery Bay, in the San Joaquin Delta, on April 29, 2009. Flood irrigation is the least-efficient method of irrigating, in terms of both water consumption and crop yield. 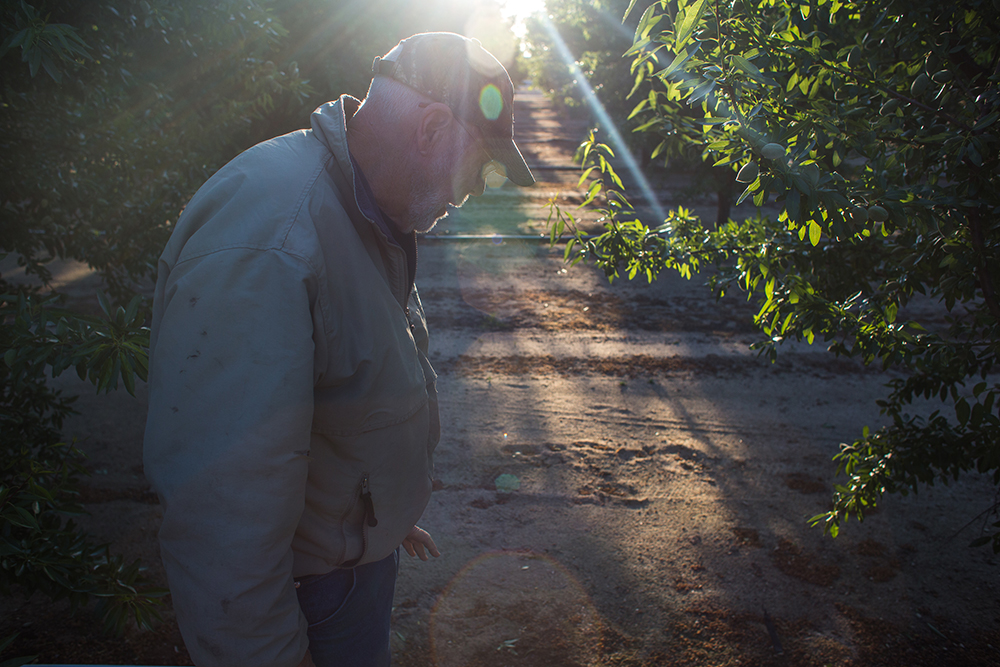 ©Nathan Weyland, Robert Weimer is farmer in Merced County near Atwater, CA. He primarily grows almonds, sweet potatoes and peaches. Bob, as he is generally known, has made significant investments in water efficiency over the years, and applies scientific rigor throughout his operation. The sole source for above-ground water in his area is Lake McClure, which is perilously low. Historically, the region has primarily relied on groundwater. Now that is more the case than ever. 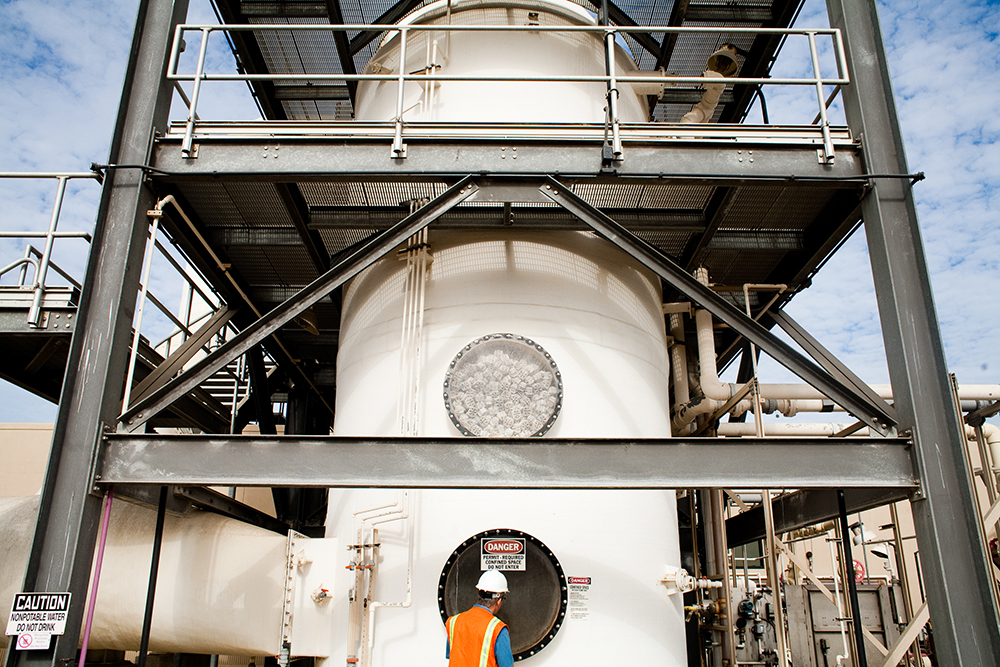 ©Nathan Weyland, A secondary plant currently under construction at the International Boundary and Water Commission’s wastewater treatment facility will treat waste water in a biological process in addition to the chemical process currently in use.