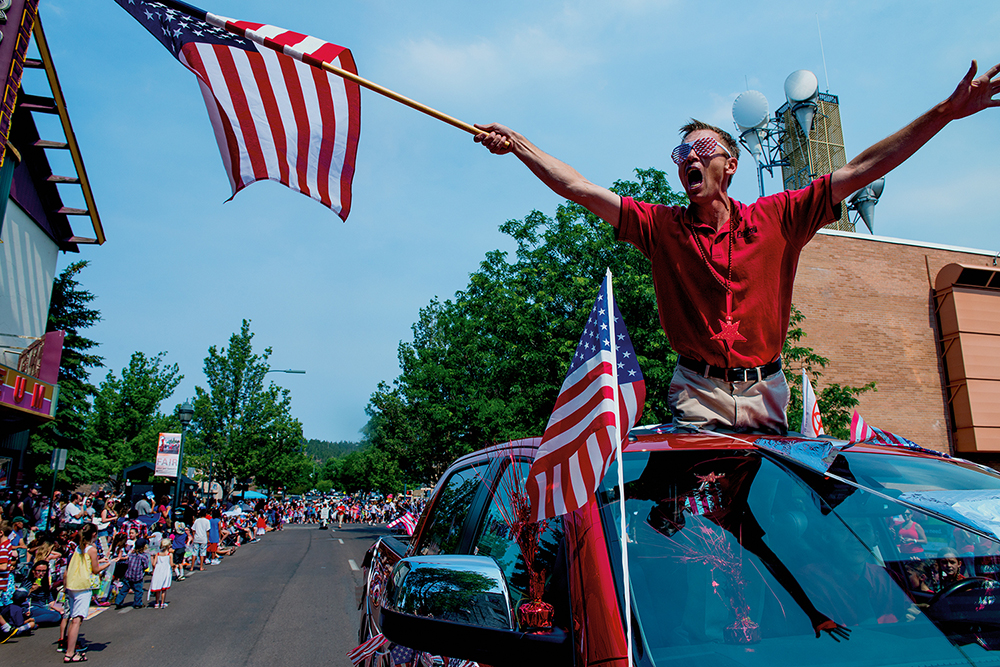 Stephen Marc’s new book American/True Colors, published by George Thompson Books and distributed by Casemate Books, documents twelve years of America and Americans from 2009 to 2020 with an explosion of color, including lots of red, white & blue, in 250 photographs. It reveals the diversity and the opposition of Americans across our expansive country.

Stephen Marc has spent 40 plus years teaching photography and has authored three earlier books of his photography. He crisscrossed the United States multiple times over a 12 year period to create his giant pictorial canvas of the American people. He set out to do nothing less than make a contemporary version of Robert Frank’s groundbreaking and iconic, The Americans. In Marc’s words: It is the first comprehensive survey of Americans in photographs made by an African-American. He set out to pay homage to Robert Frank, Walker Evans, Dorothea Lange, Gordon Parks, Henri Cartier-Bresson, Garry Winogrand and a half dozen other great photographers who have crossed America to make their photographs. The book is beautifully packaged with substantial binding, cover artwork, high paper quality, and print & color quality. 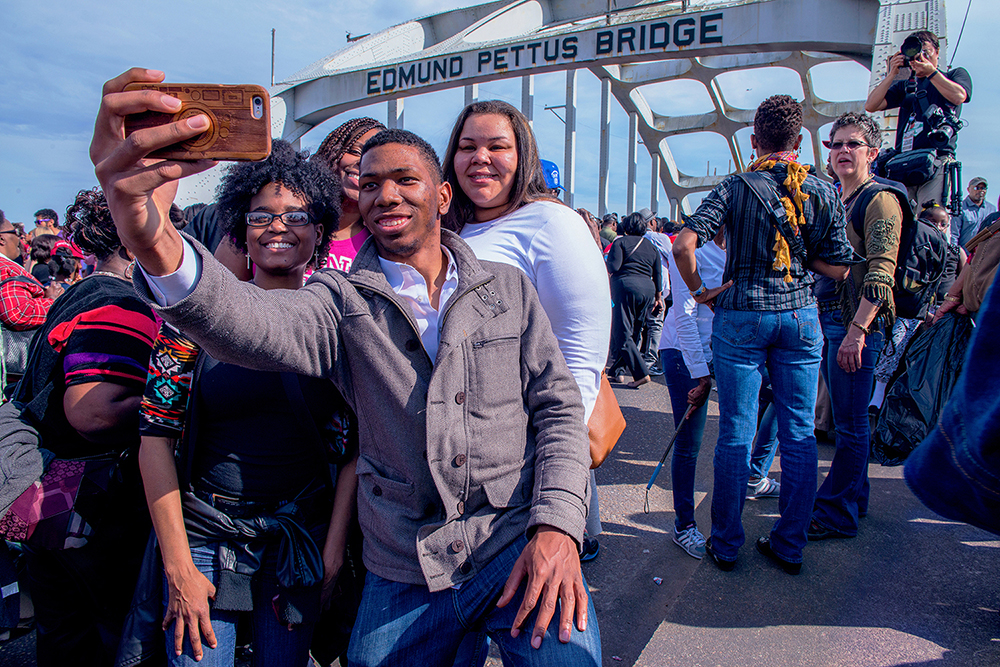 ©Stephen Marc, A group posing for a selfie on the Edmund Pettus Bridge during the 50th Anniversary ”Bloody Sunday” commemoration in Selma, Alabama. 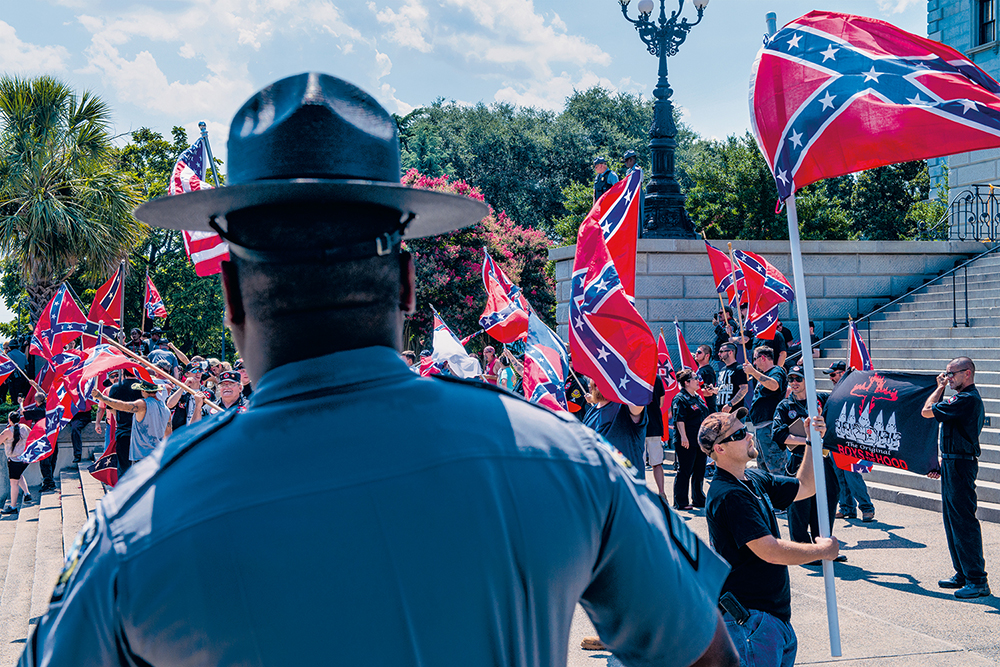 Senf’s interview does a wonderful job of revealing the elements from Stephen Marc’s childhood, that made a photographer who was able to pass through and into the diverse parts of America’s cultures in order to make the photographs in this book. Marc has the ability to walk into the center of a Ku Klux Klan rally (p.266) as well as other white supremist situations to make his photographs. In the interview Marc speaks of the things he learned as a teenager, working for and watching his uncle deal with black and white customers in an auto repair shop. In his words: When faced with a challenging situation, how I responded made all the difference in the world. Each situation is different, and it’s important to read other people’s responses while being respectful and appropriately sociable, without being overly confident. 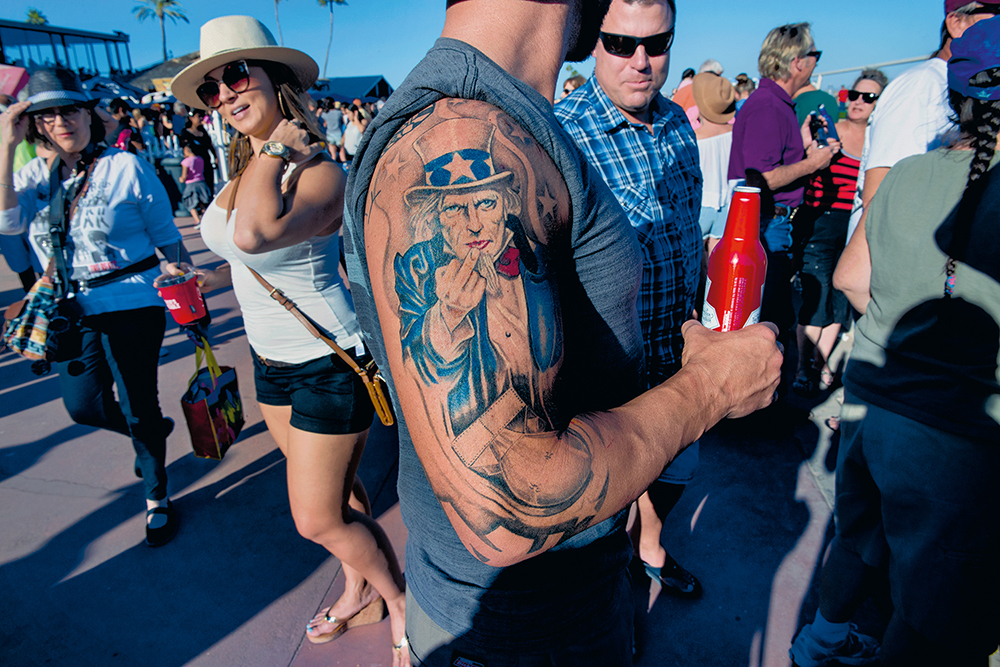 Other statements in Marc’s interview that were particularly salient for me included: According to family history… members of my family experienced America differently than most previously accepted mainstream accounts recognize. Since the seminal works of Evans, Frank, Cartier-Bresson, and Winogrand, this country has greatly changed. My perspective of and relationship to this county is not the same as those photographers, and how this country sees me isn’t the same either, I could not have traveled to or photographed many of the people and places that they did during their times, due to the social and racial climate in this country. Even now, for someone like me, moving through America can still be a challenge….

…The seminal photographers were much younger when they documented America. I often joke that this was an AARP journey. 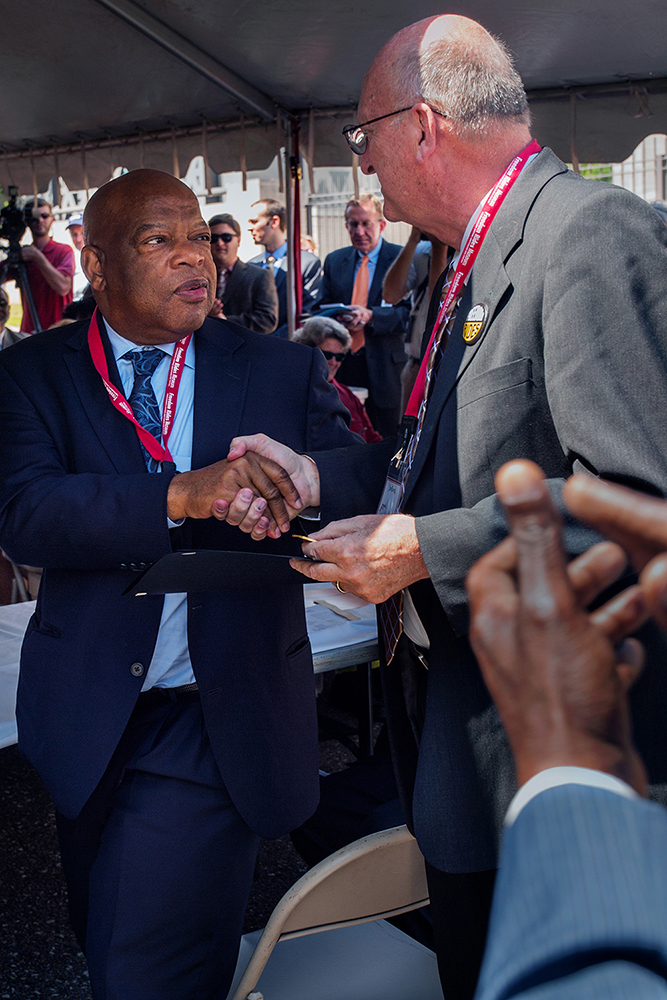 Marc continues…The book is a time capsule, a record of this pivotal time in American history, straddling the presidencies of Barack Obama and Donald Trump: the time when Americans elected their first black president in 2008 and the radically different choice that was made in 2016. In the same way it is important that historians and other artists…offer their takes on the significant historic figures, events, or periods of time. I would like for American/True Colors to be among the interpretations that provides meaningful insight into who we are as Americans as we approach the nation’s 250th birthday…. 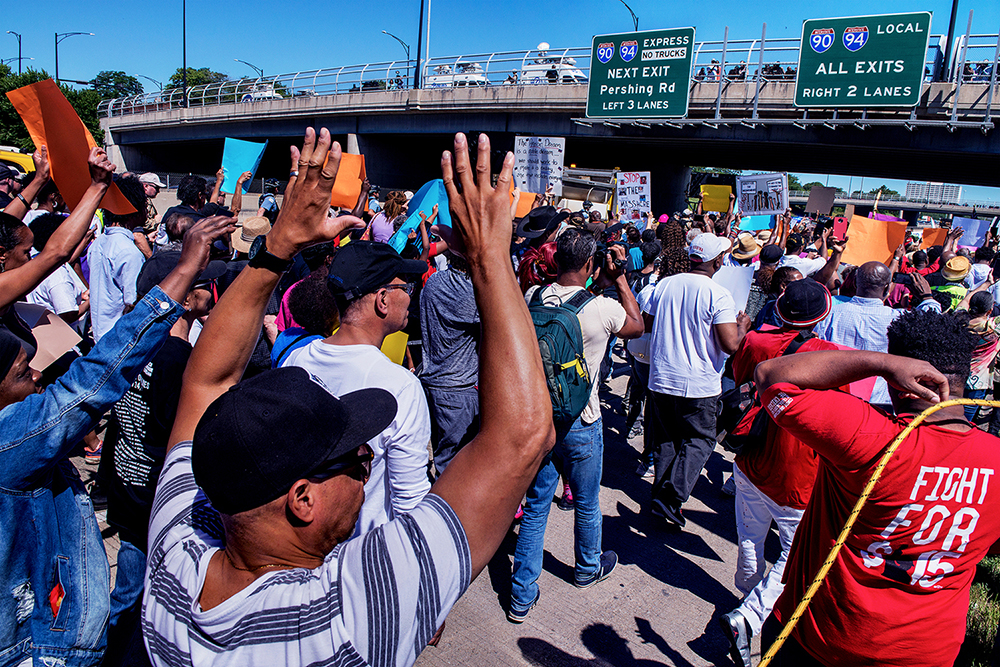 ©Stephen Marc, “Hands Up” marchers at the Dan Ryan Expressway Way in Chicago

Much of Marc’s work focuses on public gatherings like parades, protests, demonstrations, rodeos, public ceremonies and Civil War Days reenactors. In his words: In addition to photographs of specific events, there are reoccurring themes embedded in the project, including flags, and not just the American flag. They are symbolic references to our diversity, history, and culture. 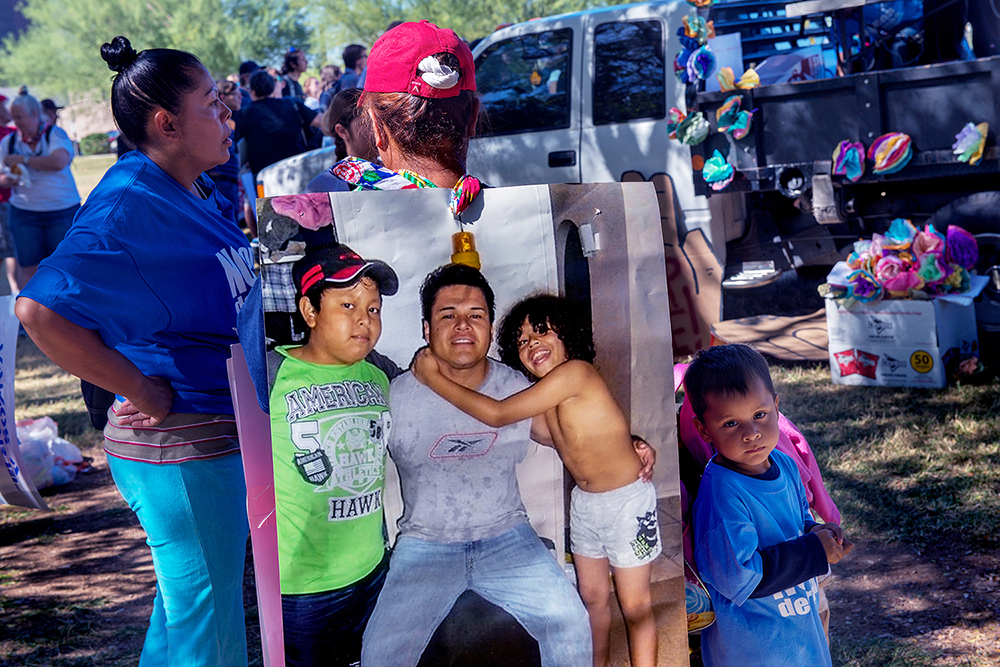 ©Stephen Marc, The Keep Families Together Rally, with a child standing next to the large family snapshot placard worn on his mother’s back in Phoenix 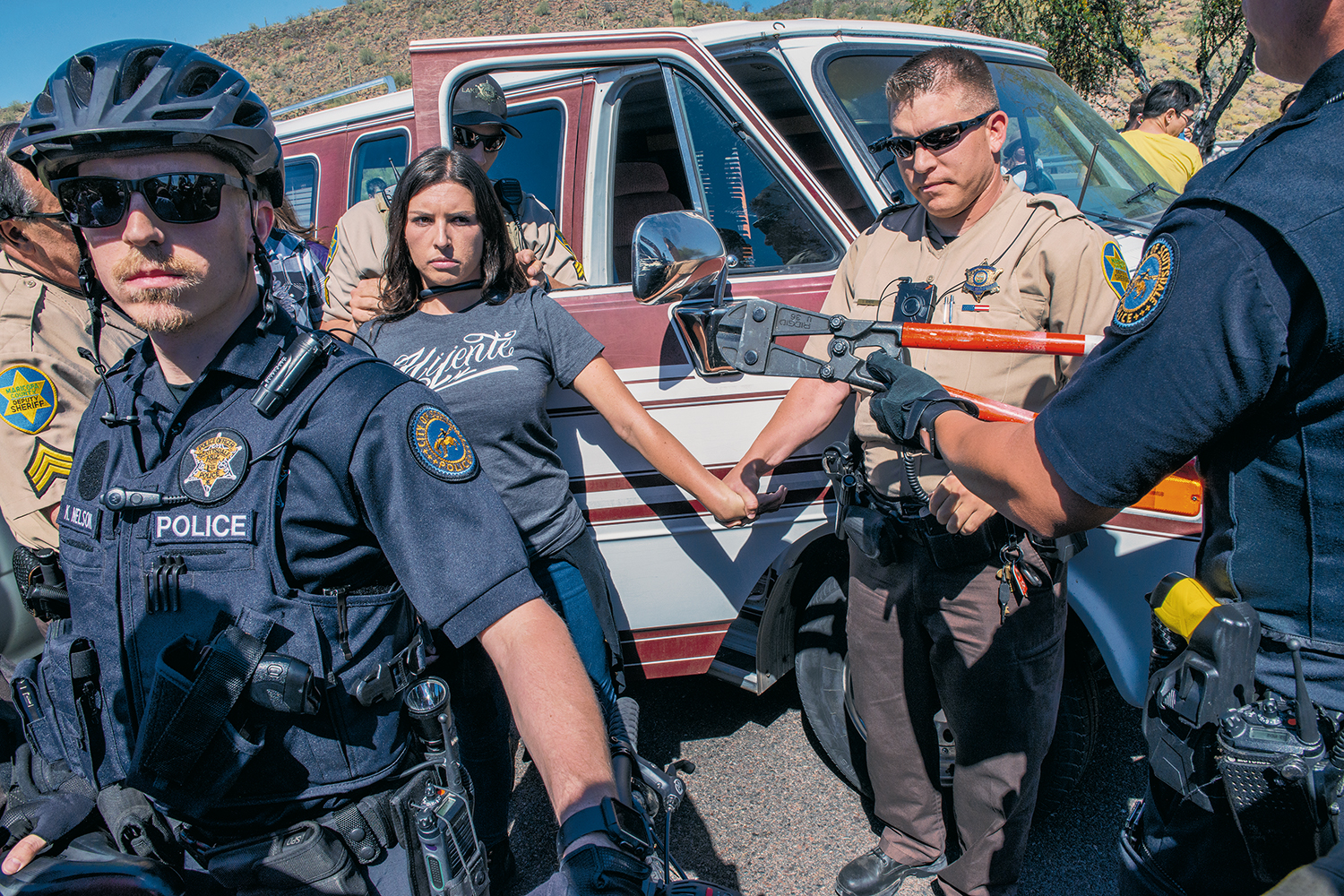 ©Stephen Marc, An arrest at the protest to block Trump’s arrival at his rally in Fountain Hills, AZ 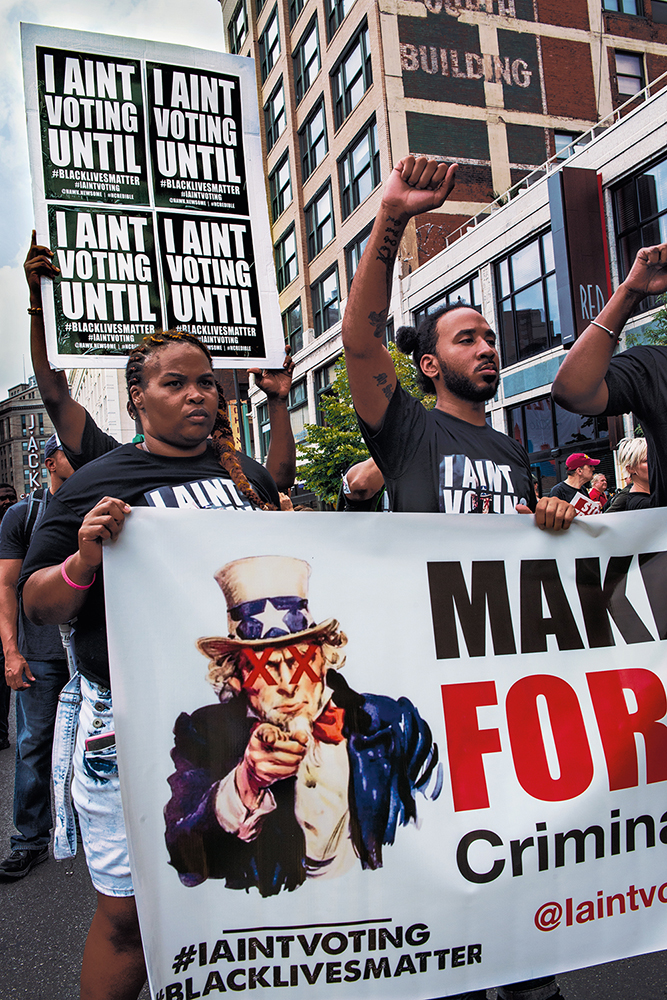 ©Stephen Marc, An Uncle Sam banner being carried by the “I Ain’t Voting Until Black Lives Matter” protestor in Cleveland

Marc concludes:
…America holds a great deal of promise, but in order for it to live up to its ideals and potential, it will have to acknowledge the impact that its history continues to hold. The conundrum of coexistence will require us as a people to reevaluate ourselves and recognize, and ideally embrace (or at least tolerate) in each other, the diversity of who we are as Americans. 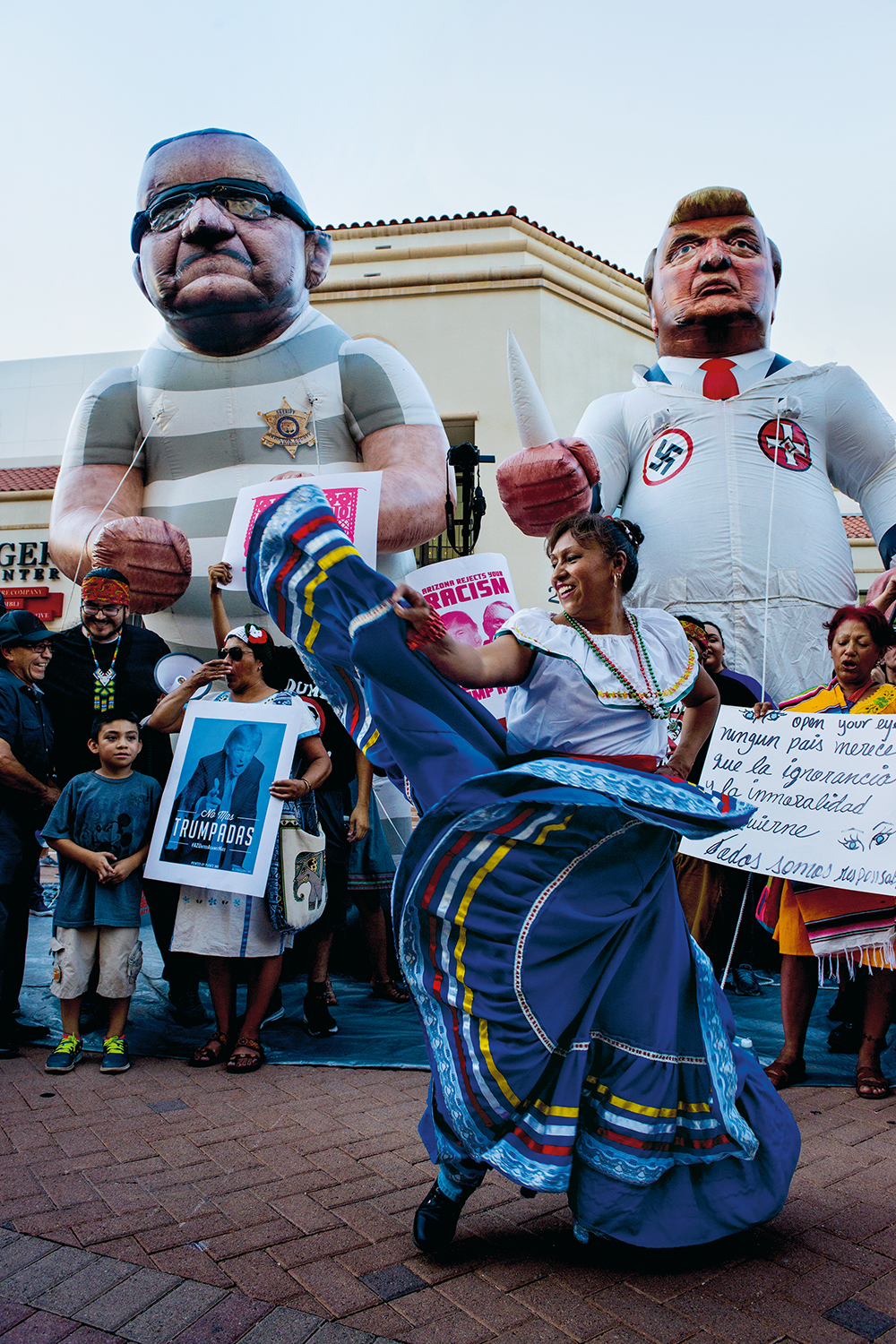 ©Stephen Marc, A folkloric dancer in front of the Trump and Arpaio inflatables in Phoenix

Brief descriptions of each photograph can be found in the back of the book with the event, city and dates listed. Although I understand why he chose to segregate his beautiful images from the descriptive captions, there were times I wished he’d couple them, as I felt I had to flip back and forth from the image to the caption, because the context of the who/what/where/when is important to a fuller understanding of many photographs.

Also included in the book are five of Stephen Marc’s digital collages, he calls American Jumbo. 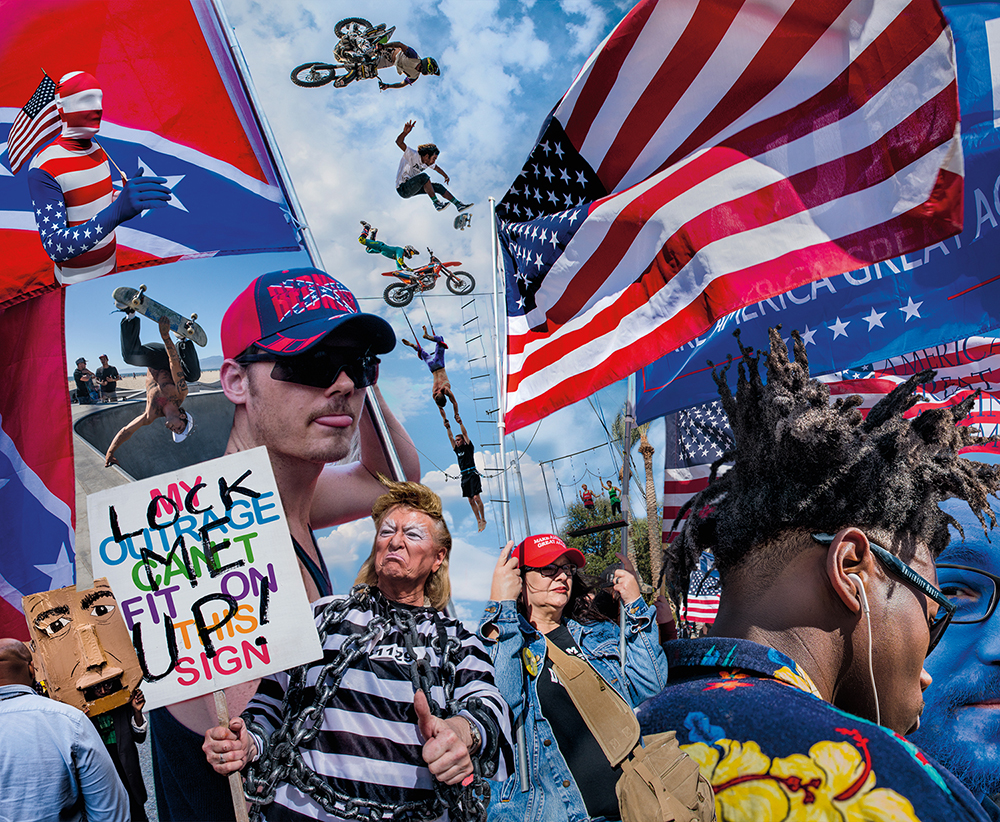 Stephen Marc is a documentary/street photographer and digital montage artist, who was raised on the South Side of Chicago. He is Professor of Art at Arizona State University, where he began teaching in 1998, after twenty years on the faculty of the Department of Photography at Columbia College Chicago. Marc has received grants from the Arizona Commission on the Arts, the Illinois Arts Council, and the National Endowment for the Arts, and his awards include the 1858 Prize for Contemporary Southern Art and the Society for Photographic Education’s Insight Award. Marc has published three photography books: Passage on the Underground Railroad (University Press of Mississippi, 2009), The Black Trans-Atlantic Experience: Street Life and Culture in Ghana, Jamaica, England, and the United States (Columbia College Chicago, 1992), and Urban Notions (Ataraxia Press, 1983). Since 2008, Passage on the Underground Railroad has been listed as an Interpretative Program of the National Underground Railroad Network to Freedom, a division of the National Park Service.