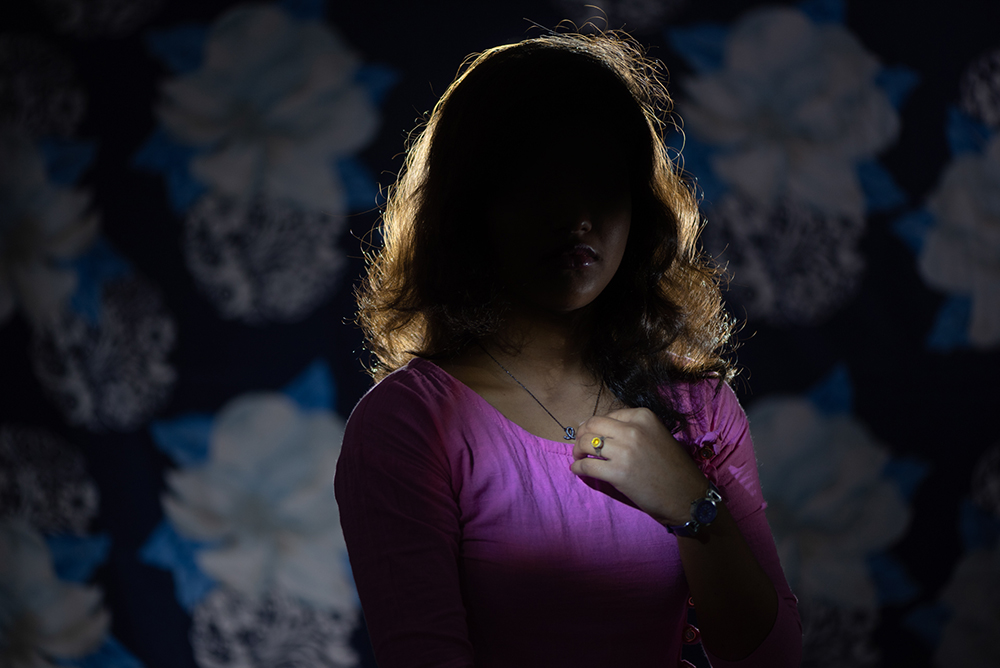 ©Smita Sharma, When she was 12, S. left her home in Narayanganj, Bangladesh, with a family acquaintance who promised to find her a job in Dhaka. She was handed over to a man who smuggled her into the Indian state of West Bengal which shares a long porous border with Bangladesh. From West Bengal she was taken to a brothel in Mumbai and sold. S. was enslaved for two years before police freed her and sent her to a shelter. Six months later she met a woman who said she’d take S. back to Bangladesh but instead sold her to a brothel in Namkhana, a small town in West Bengal. After she was rescued again, S. has been staying at a shelter and waiting for her repatriation.

This week we are celebrating a wonderful organization in Los Angeles: the Las Fotos Project and The Foto Awards event taking place on October 23, 2021. Today we celebrate the Advocacy Award Winner (adult), Smita Sharma.  The Advocacy Award is given for power in photojournalism or use of photography for community advocacy & social justice.

Las Fotos Project’s mission is to elevate the voices of teenage girls through photography and mentoring, empowering them to channel their creativity for the benefit of themselves, their community and future careers. The organization was founded in 2010 to introduce teenage girls to the transformational power of photography and advance positive change in the surrounding community. 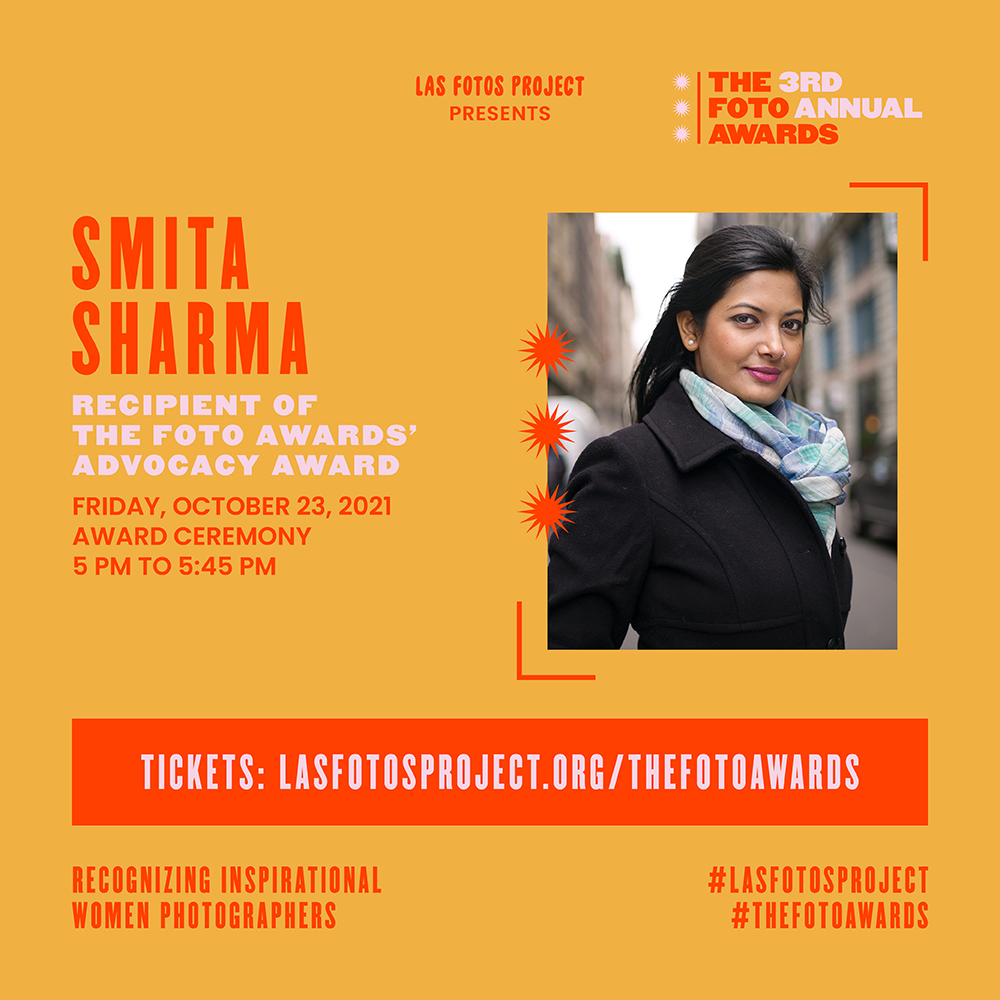 Smita Sharma is an award winning photojournalist and visual storyteller based in Delhi, reporting on critical human rights, gender and social issues in her own community as well as in the Global South on assignments for Human Rights Watch, National Geographic Magazine, and other publications.

From documenting the effect of pregnancy on girl’s education in Kenya to child marriage in Nepal, and sex-trafficking across India and Bangladesh, Sharma is committed to representing people with dignity and telling underrepresented stories with impact.

Sharma is a TED Fellow and an IWMF Reporting Fellow. She is the recipient of Amnesty International Media award for Photojournalism, One World Media Award for her short film “Rebel with a Cause” and Exceptional Women of Excellence award by Women Economic Forum. Her work has been exhibited and shown globally including at the UN Headquarters in New York.

She is a member of The Photo Society, a community of National Geographic Magazine photographers and part of Women Photograph and Diversify Photo community. She has taken HEFAT training in Mexico City and is available for assignments globally.

Sharma is a graduate from the photojournalism and documentary photography program of International Center of Photography, New York and has a post graduate diploma in Journalism from University of Pune.  Follow Smita on Instagram: @smitashrm 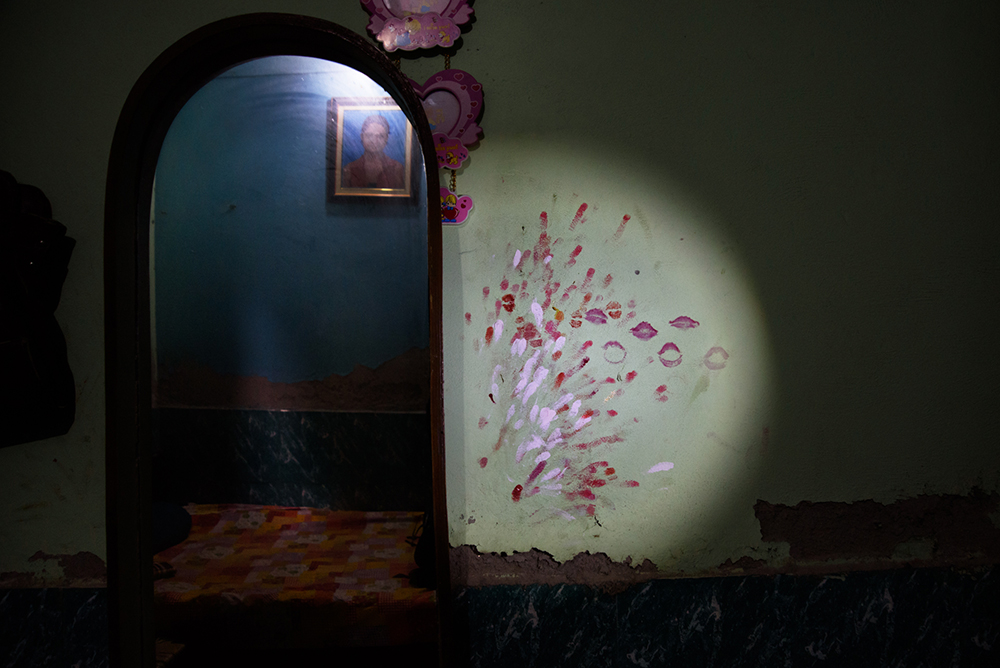 ©Smita Sharma, A view of Priya’s room who was gang raped and choked to death at the Delhi-Haryana border. Priya, 24 was on her way back home from office, when she was gagged by two men from her neighbourhood and taken to an under-construction site. School children found her body two days later in a semi-naked condition with ants coming out of her eyes and mouth.

Anna Grevenitis: Tell us about your growing up and the landscape of your childhood and in this same breath, what brought you to photography?

Smita Sharma: I was born and raised in a small hilly town in northeast India called Shillong. While growing up, I witnessed firsthand racial violence and discrimination among the tribal and non-tribal communities which never made it to the national headlines. I felt we were neglected, and the story of our communities wasn’t being told. I studied mass communication and then journalism but did not venture into professional photography because I didn’t have a mentor or enough knowledge of how to tell stories through photographs. I worked as a correspondent and sub editor for an English daily newspaper for six years before taking the plunge into photojournalism. I then went to New York and studied photojournalism and documentary photography at the International Center of Photography. After graduation, I started working on various photography projects, assignments  and also joined a non profit Too Young To Wed as their social media coordinator. 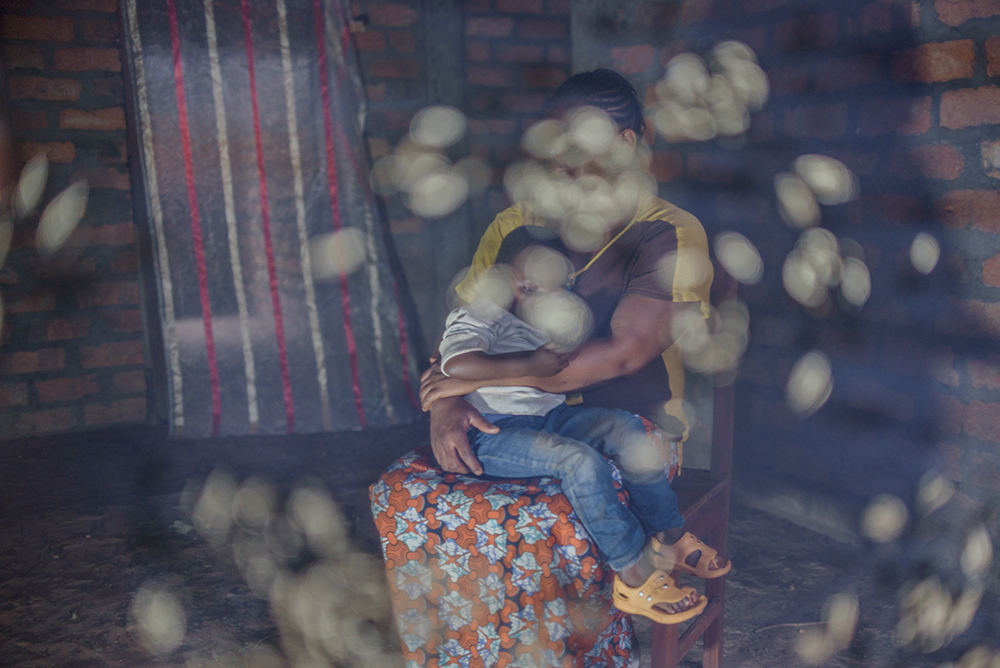 ©Smita Sharma, Angie, 27, with her child in Bangui, Central African Republic. Seleka fighters killed Angie’s husband and parents, and captured her near Bambari in June 2014. They held her as a sex slave for nine months with five other women and girls. Multiple militia men raped her repeatedly. Angie became pregnant from the rapes and eventually escaped, just before giving birth. After an initial struggle of acceptance, Angie came to terms and eventually grew fond of her child.

AG: Looking at your body of work–both professional and personal–I am particularly drawn to the palpable vulnerability of your subjects. There seems to be a genuine intimacy between you, the photographer, and them, the persons being photographed. Would you mind sharing with us some of the ways you establish your relationships with the various people you photograph?

SS: I have worked on human rights and social justice issues not just in my own country India but also in other countries where I have shown difficult and sensitive issues such as child marriage in Nepal, teenage pregnancy in Kenya, sexual slavery in Central African Republic and murdered transport workers of Guatemala. Photography is powerful.  As image-makers, as storytellers, it is our responsibility to ensure nothing goes wrong with the people we photograph. We’re nothing without them. I believe in protecting the people I photograph who are often vulnerable women and children. I work with my subjects so they can tell the world what their lives are really like. In some countries such as India for example, working on sexual violence comes with a legal obligation. You cannot reveal the identity of the minors who are victims of sexual crimes. But for me it is an ethical principle that runs to the core of everything I do. At the end of the day it’s about your conscience. I try to represent people with dignity and fairness even if they are in the worst of situations. 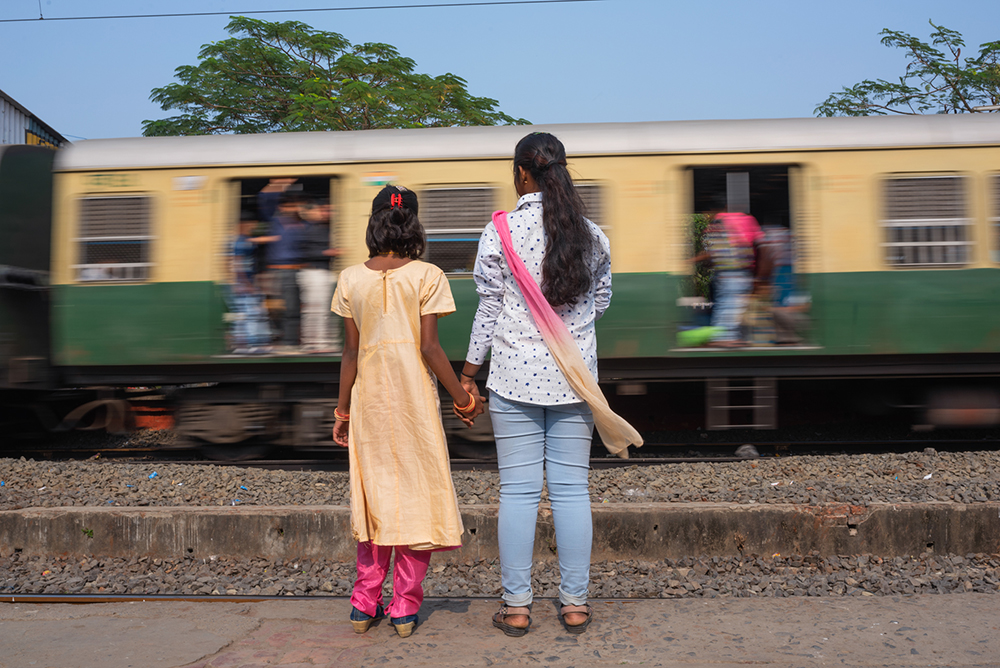 ©Smita Sharma, M., who is now 18, waits for a train with her cousin in South 24 Parganas, a largely poor district in West Bengal with a high incidence of trafficking. A man M. met in a class sold her to a brothel in Delhi. She managed to call her father and was rescued by police with help from a nonprofit called Shakti Vahini. “This incident is a dark episode in my life,” M. said. “When I came home, I was scared and ashamed. But I am not afraid anymore.”

AG: How do you decide on a new (personal) project? Is there a lot of research involved beforehand? How do you contact people on site? Please share with us a little bit about your process.

SS: Research is the core of everything. You cannot do half baked work. It will show in the images you make. I study and spend hours of research before diving into a new territory. Knowledge of local laws and abiding by them, honoring people’s culture, asking permission and seeking informed consent and not leading with my camera has been the foundation of my work. To contact people I always get in touch with a local journalist or activist or a local non profit who are working on the issue I want to focus on. Sometimes I have also got in touch with teachers, lawyers and doctors to help me get access to the communities I want to work in. 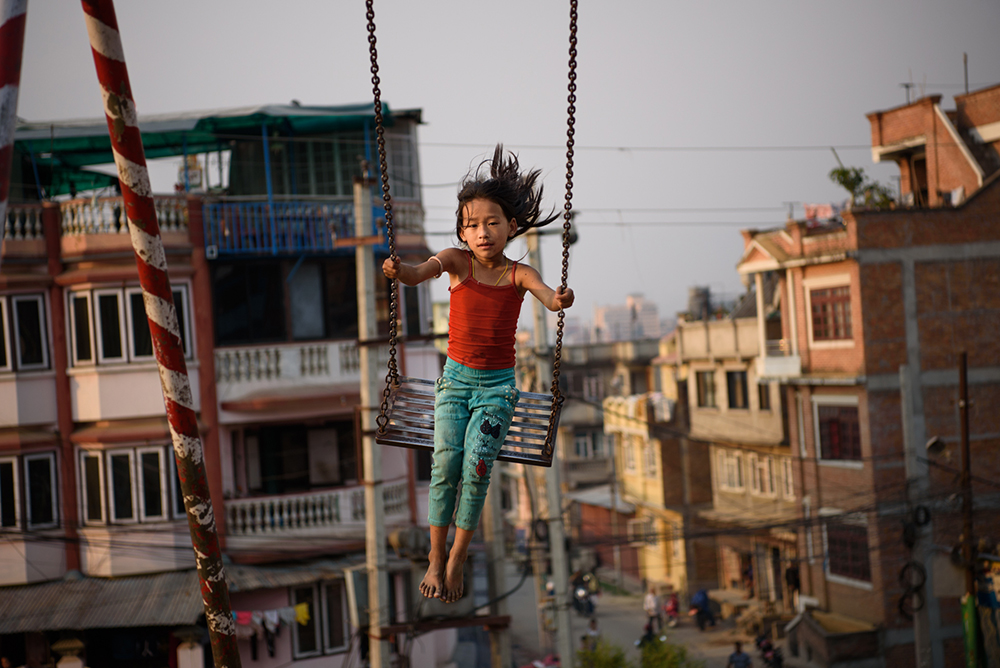 ©Smita Sharma, A girl plays in a public park in Patan. Thirty-seven percent of girls in Nepal marry before the age of 18, and ten percent are married by age 15. The minimum age of marriage under Nepali law is 20 years.

AG: Do you have a specific project–something new, something on-going or just something close to your heart–that you would like to tell us about?

SS: I am coming up with a photo book with my work on cross border child sex trafficking between India and Bangladesh to be published by Fotoevidence next year. I began working on sex trafficking six years ago. In the first three years, I undertook this project independently, financing it through my work from other assignments, before pitching it to National Geographic. In 2018, National Geographic magazine commissioned me to continue the work for them. This in depth 26-page story was published globally in the October 2020 issue of the magazine and it received a huge global response. I also received the Amnesty Media Award for Photojournalism for this work in April this year. My idea is to distribute this book to school and university libraries in India and Bangladesh and also to the law enforcement agencies as it can be used as a training material for their sensitisation program. 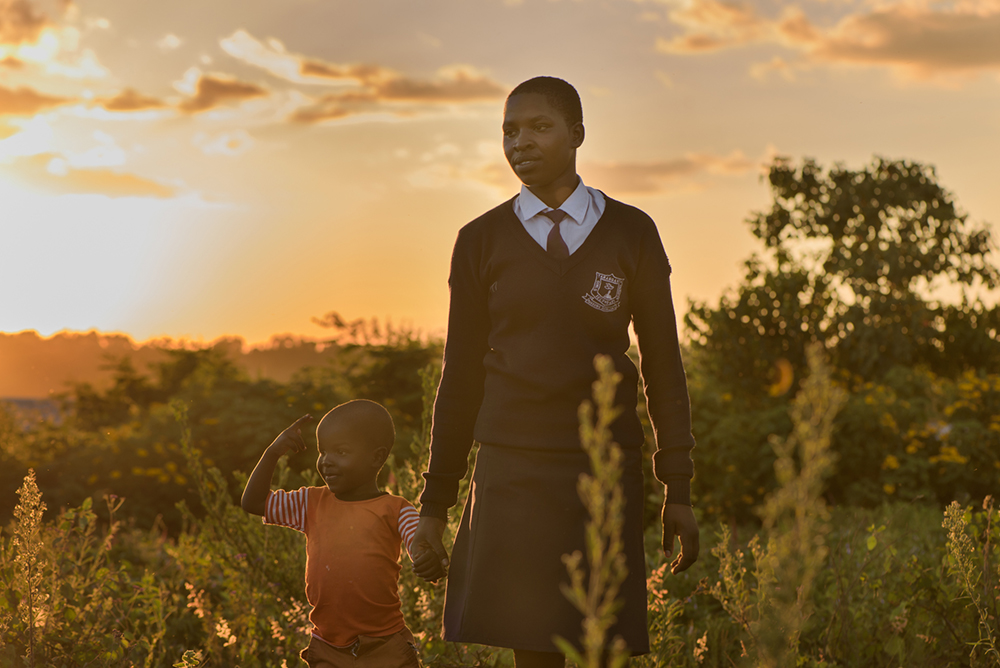 ©Smita Sharma, “Angela,” 20, walks with her son near her home after returning from school in Migori county, western Kenya. She is a Form 4 student at a girls-only school. Angela became pregnant when her trainee teacher offered to pay some of her primary school fees in return for sex. Her father tried to marry her off to suitors after she gave birth, but Angela’s mother fought against this and supported her return to school. She wants to go to college and study nursing. Smita Sharma for Human Rights Watch

AG: What advice would you give to young, starting women photographers?

SS: For any photographer, it’s very important to shoot personal projects. By that, I mean making photographs for yourself, apart from the ones that help you pay the bills. Any subject or story that you feel strongly and passionate about can be turned into personal work. It can be as simple as documenting your relationship with your mother, to working on deeper and more complex topics, such as climate change, gender, education or the aftermath of war. Follow stories which are closer to your heart.

Any good work doesn’t happen overnight. One needs to have patience. Read about and study the subject. Research is the key, and in order to create great work, be willing to spend time on preparation. If you need to make calls and talk to the experts, do it. Your vision and work ends up becoming your identity as a photographer. So my advice would be to stay invested in your dreams. Sincere effort always pays. 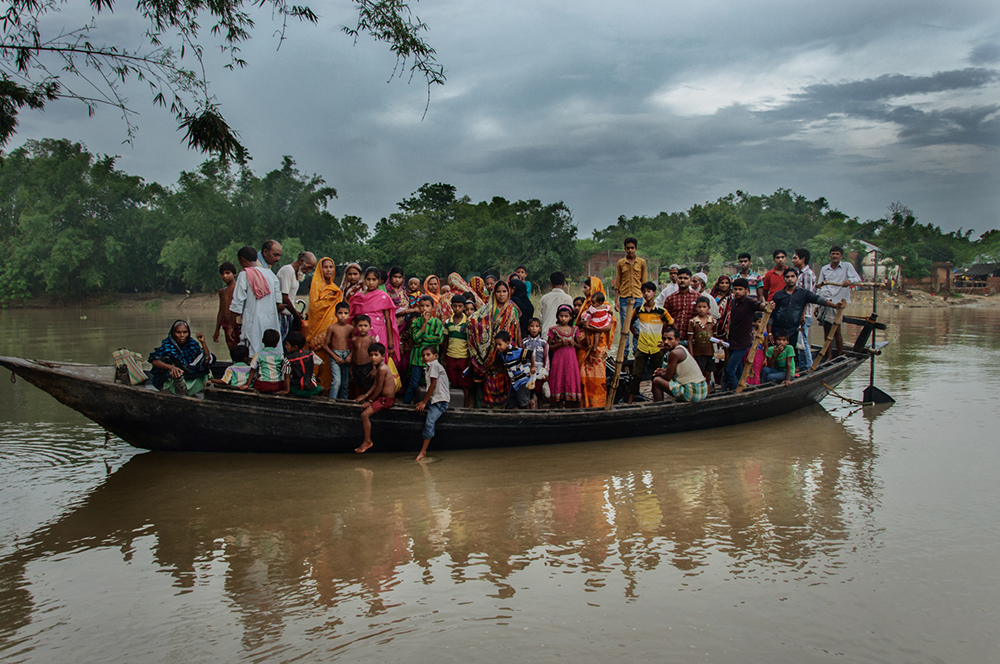 ©Smita Sharma, Daily life in the robbers’ islands. In the absence of a bridge, people are forced to commute on boat which is often overloaded, to reach the other side of the canal.

Brooklyn-based artist Anna Aude Grevenitis found photography in a meandering way. Her formative years were filled with the impassioned study and dedicated teaching of the English language and literature, but when her daughter was born–and a year later her son–her world naturally morphed into full-time mothering. Drawing on these experiences to inform her practice as she was teaching herself the medium, she effortlessly pointed her lens at her family and herself. In her daily introspection, she searches for meaning with her camera. Anna Grevenitis is interested in photography as an act of establishing visual memory and engaging in social visibility, over time. Her photographs have been exhibited both in the United States and internationally. Anna Grevenitis’ work has been featured in The New Yorker in “A Mother’s Steely Portrait of her Daughter’s Life with Down Syndrome.” In 2020, for her series Regard, she was the recipient of the 17th Joyce Elaine Grant Award, the 2nd Annual Foto Awards and became a Critical Mass Top 50 Winner and a finalist of Lensculture Black and White Photography Awards 2020.