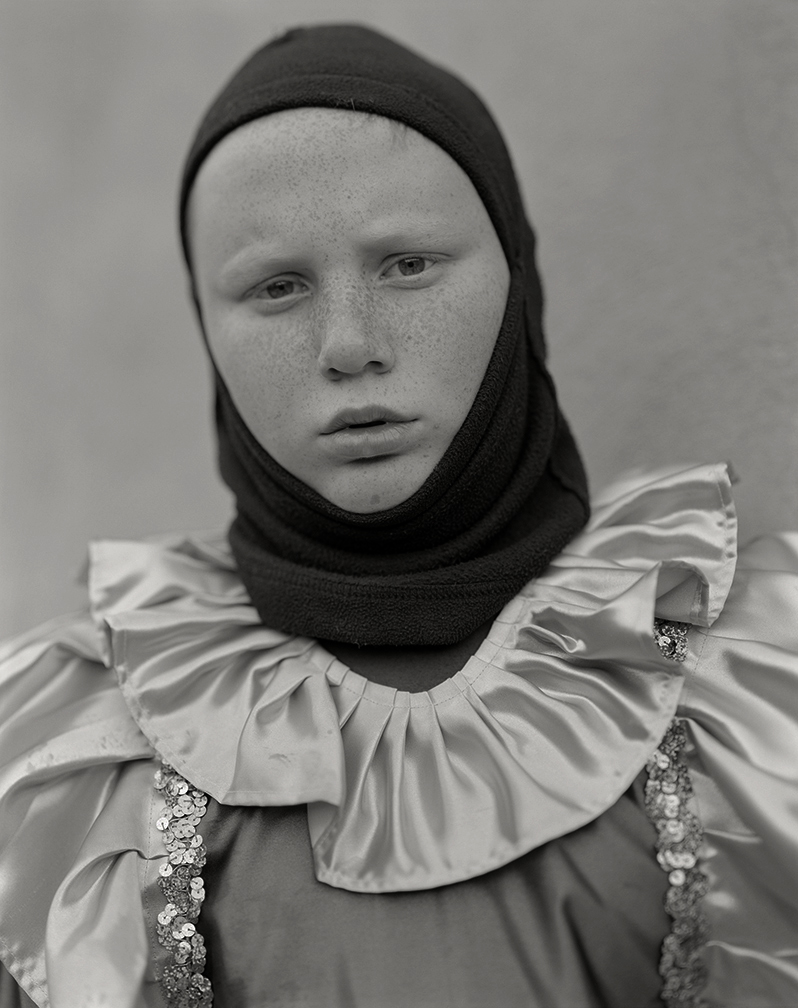 Andrea Modica’s portraiture work is remarkable – psychologically, conceptually and visually. I recently took a close look at her new series “Wenches.” This work struck a chord with me, and I was curious to know more about what motivates her, as her photographs continue to dig deeper. I took a workshop with Andrea many years ago and remember the way she spoke. She was genuine and unpretentious, opening herself up for scrutiny. Exactly the way she shoots.

I asked her a few questions about her influences. 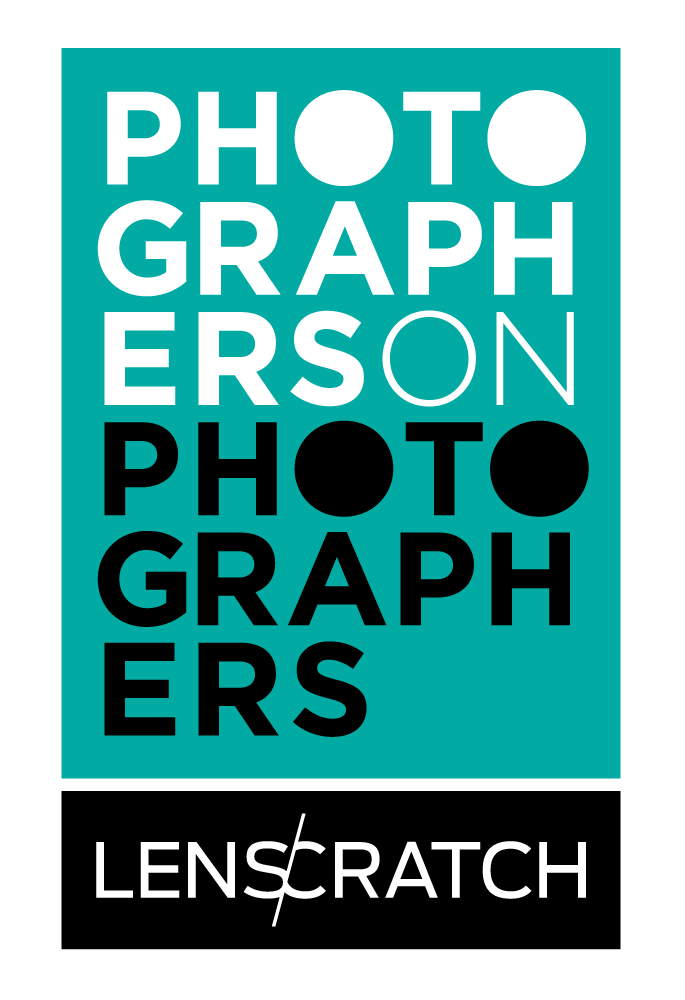 Lydia Panas is an artist who works in photography and video. Her work explores the unconscious, investigating notions of belonging and alienation. Raised between two continents, the notion of home always felt elusive. Drawing from varied sources such as literature, dance, and psychoanalysis, her images often serve as metaphors for larger issues concerning what it feels like to be human.

Lydia’s work has been exhibited widely in museums and galleries across the country and internationally. Her works are represented in public and private collections including the Brooklyn Museum, Bronx Museum, Museum of Fine Arts Houston, Palm Springs Art Museum, Allentown Art Museum, Museum of Contemporary Photography Chicago, Museum of Photographic Arts San Diego, and the Sheldon Museum among others. Her work has appeared in many periodicals such as the New Yorker, the New York Times Magazine, Philadelphia Inquirer and The Village Voice. Lydia has degrees from Boston College, the School of Visual Arts, and New York University/International Center of Photography. Her two monographs include “Falling From Grace” and “The Mark of Abel”. She divides her time between Kutztown, Pennsylvania and New York, New York.

Andrea Modica was born in New York City and lives in Philadelphia, where she works as a photographer and teaches at Drexel University and the International Center of Photography. She is a Guggenheim Fellow, a Fulbright Scholar, a Knight Award and Anonymous Was a Woman Grant recipient.  Her photographs have been featured in many publications, including the New York Times Magazine, the New Yorker, Newsweek and American Photo. Her books include Treadwell, Barbara, Minor League, Human Being, Fountain, As We Wait and most recently, January 1. 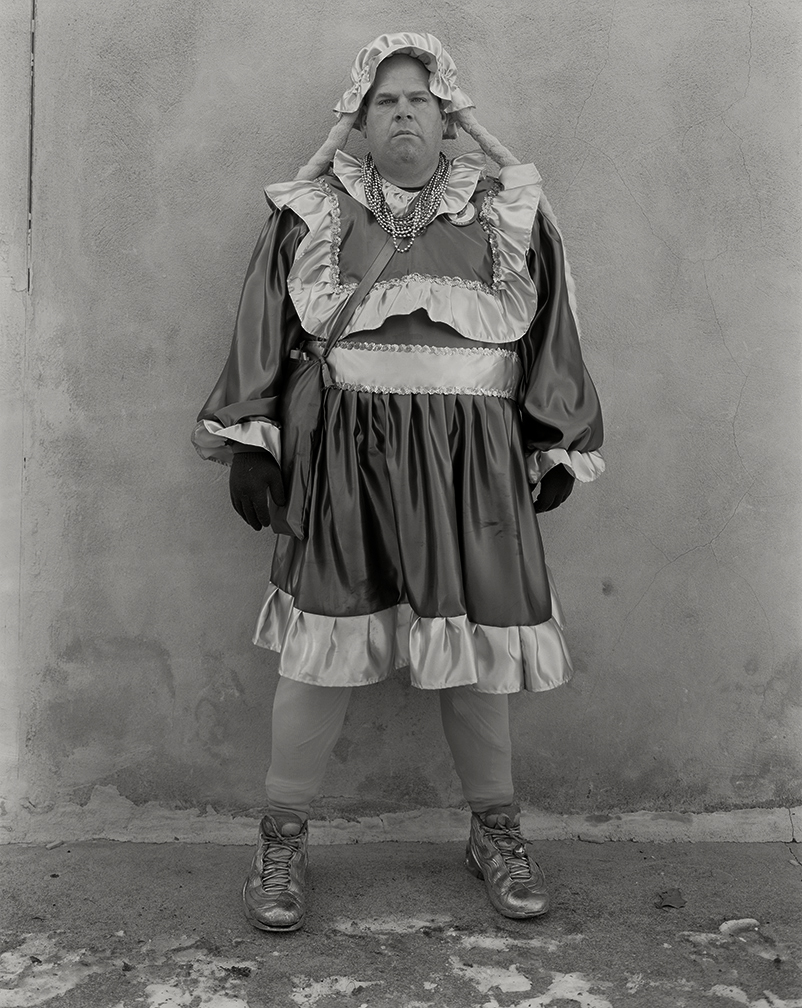 Lydia Panas: What interests you most about photography? Why do you do it? 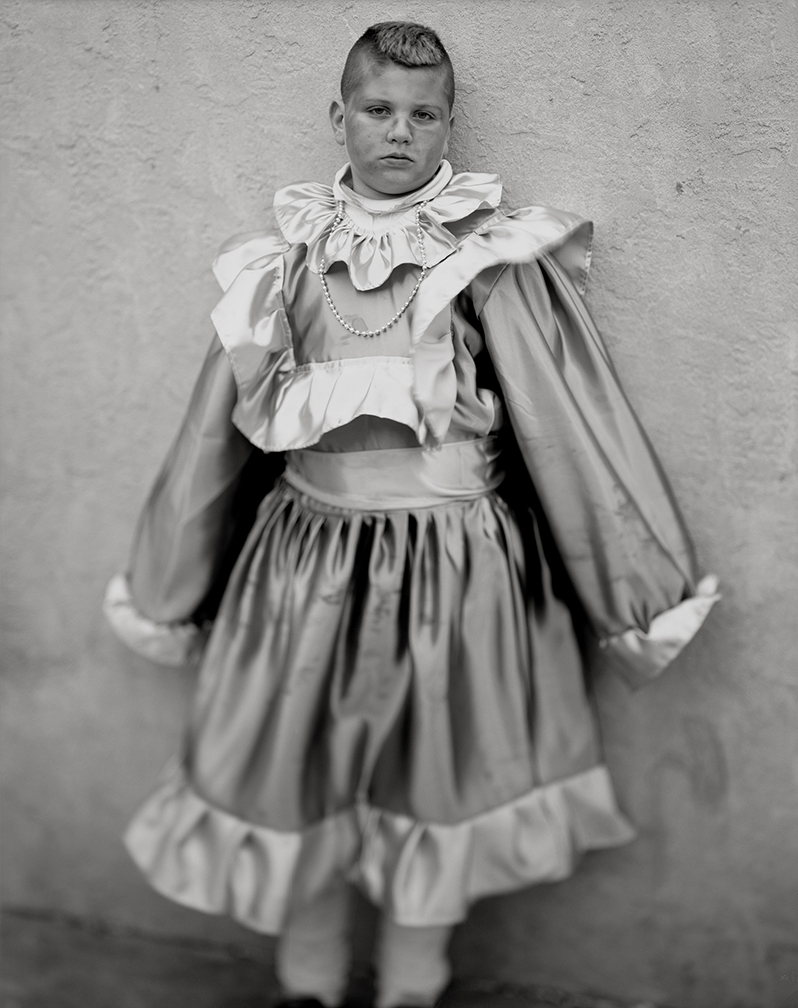 LP: Your portraits are full of feeling.  There is a strength, and a distance, a loneliness and an intensity that when combined, makes them so strong.  I’m especially interested in what happens when you make a portrait and I’m curious how much consciousness you bring to the process.

AM: I work intuitively; I rarely know why I need to photograph something or somebody when I begin a project – often it’s a matter of proximity or availability. For example, I read about the Oneonta Yankees returning to our town in the local paper shortly before a nap, and by the time I woke up I KNEW that I had to photograph the players. The motivation was partly due to attraction, partly repulsion, largely confusion – it all turned into an obsession. 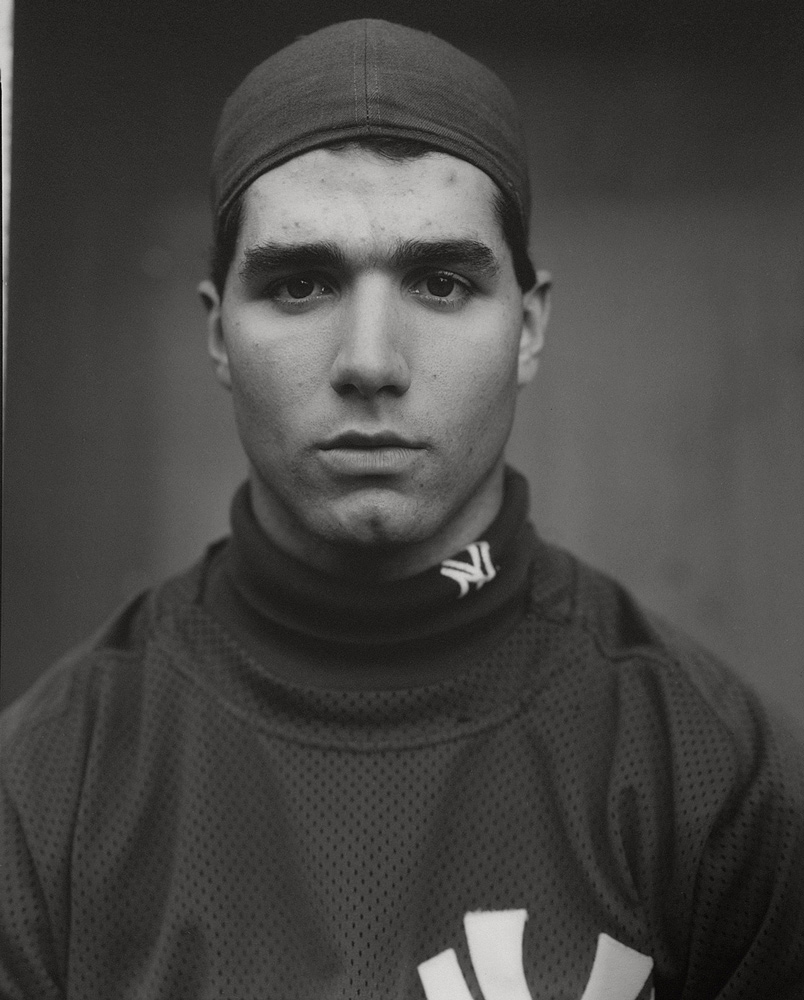 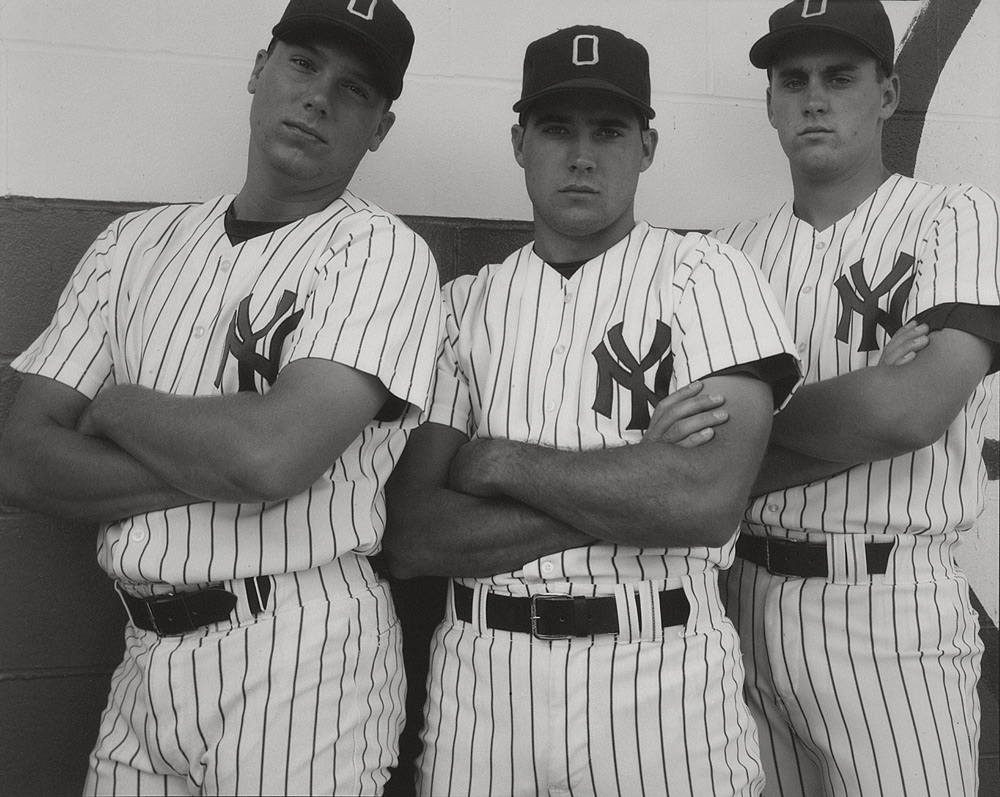 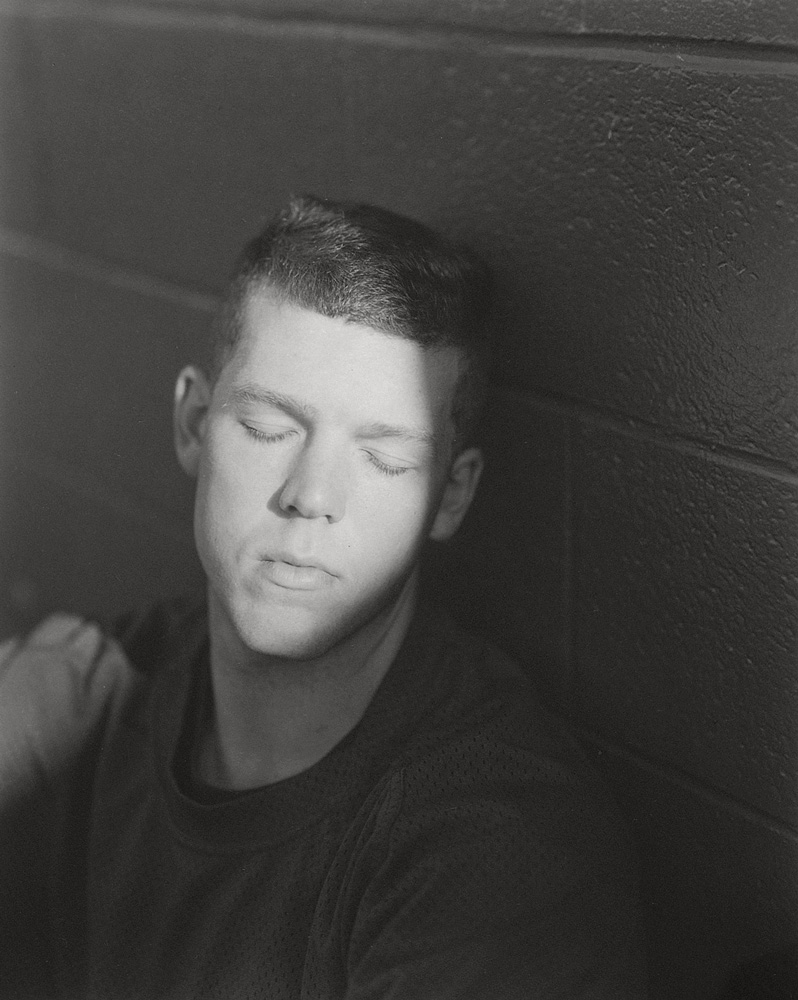 LP: Can you tell us more?

AM: At times, I photograph from a place of pleasure, love, lust or plain curiosity and other times I’m motivated by my own confusion or discomfort. I make pictures of unfamiliar subjects as well as people I care about deeply: family, friends, Francesco (boyfriend). Photography has been with me through my personal joys and crises, and it’s the process of making pictures, not the product, that helps me see more clearly and live a fuller life. 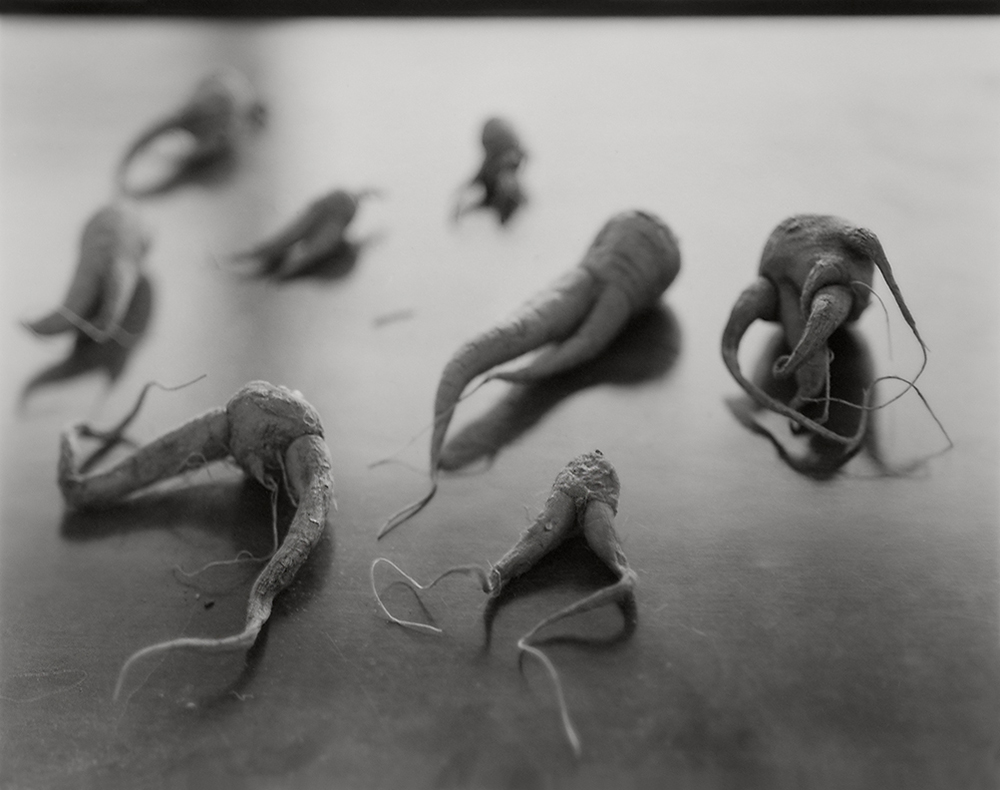 AM: Using the large camera greatly affects the meaning of the work.  Being underneath the black cloth creates something of a distance that simultaneously makes way for what feels like real intimacy, however brief. The camera is big and heavy and the process is slow and deliberate, permitting information to unfold before the lens. The results remain surprising and endlessly interesting to me.

I learned photography in the darkroom, and I’m still attached to the entire process, from loading the film holders to flattening the final print.  Moving around barefoot in a relatively well-lit room, working alone for hours – this is entirely appealing. In the end, I like the way the hand-made platinum prints feel in my hand; they give me joy. And the physicality of using the big camera is conceptually and actually integral to this sensation. 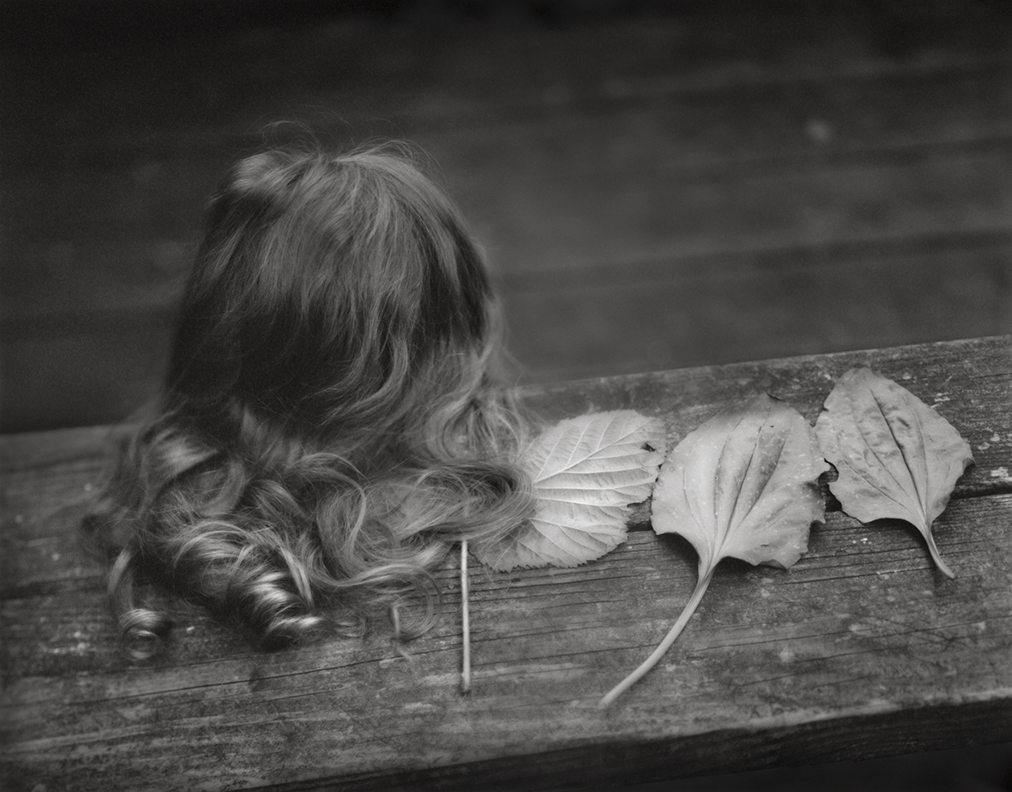 LP: You have been making photographs for a long time. How have things changed for you?

AM: I know a bit more about putting together a picture, but more to the point, in terms of using the big camera, obviously, people see me differently now that I’m older, and vice versa. Of course, these facts also affect the meaning of the work, and how interesting is that? 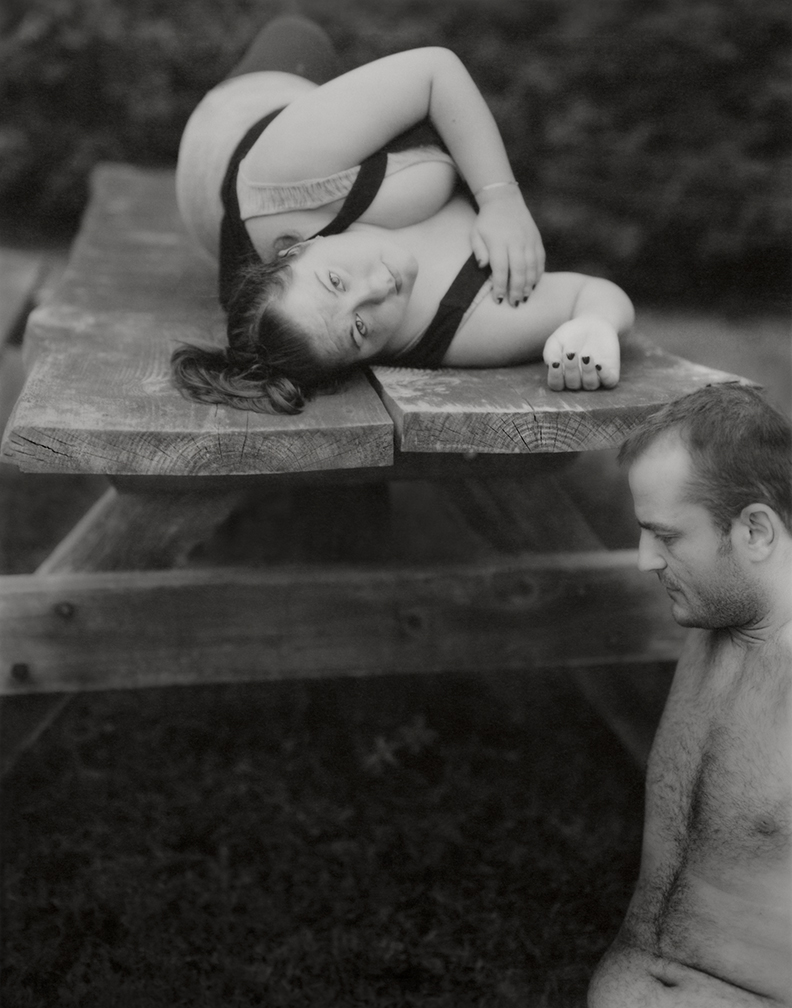 LP: I am very curious about the work called “Wenches” from your new book “January 1” (L’Artiere). It feels very intense and personal and seems to parallel in some ways the work from “Minor League”, both stories about men who are part of a group. Tell us a little about your new work “January 1”.

AM: This work, like the series “Minor League”, is about an insular world of both inclusion and exclusion.  For each project, I photographed groups who bond through gender, age, culture, proximity and purpose.  Both the Oneonta Yankees and the Wenches have selective memberships. A quietly political project, “January 1” explores a faction of Philadelphia Mummers called Wenches. These all-male clubs don female garb, including dresses, undergarments, purses, parasols, wigs, make-up, golden shoes, and sometimes the illegal blackface. The Wench tradition is passed down from one generation to the next, with some groups including all the male members of a family, from young boys to great grandfathers. I approached both the baseball players and the Wenches as a true outsider, a tourist of sorts, with all the pleasure and trepidation of exploring the unknown. 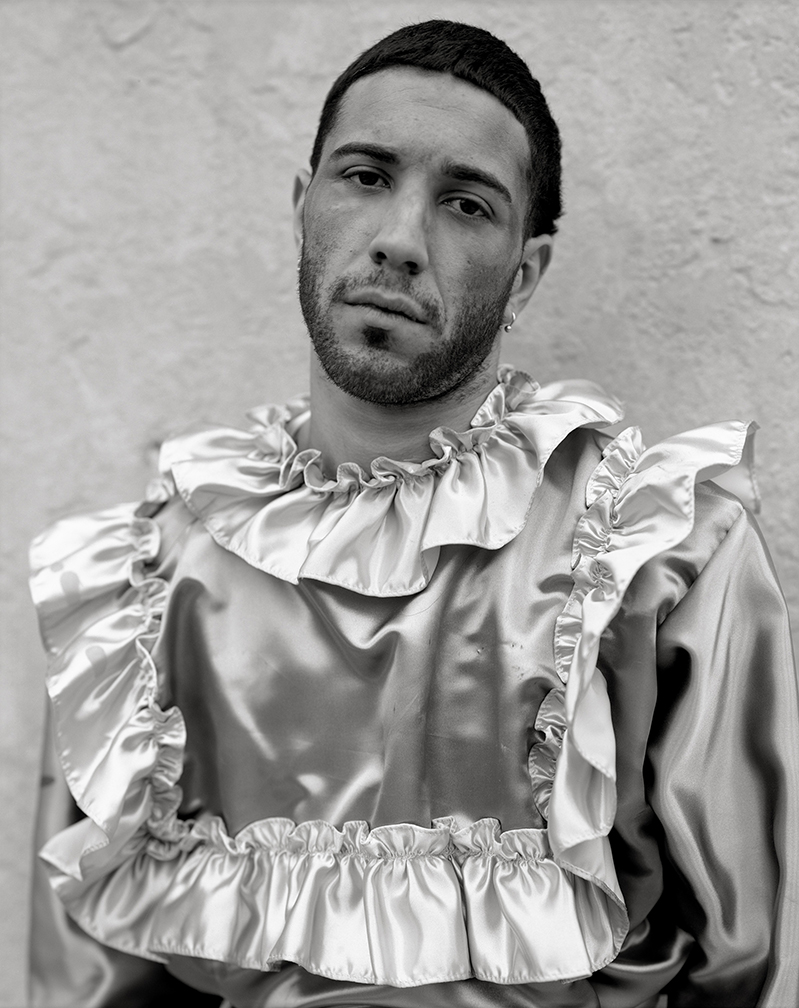 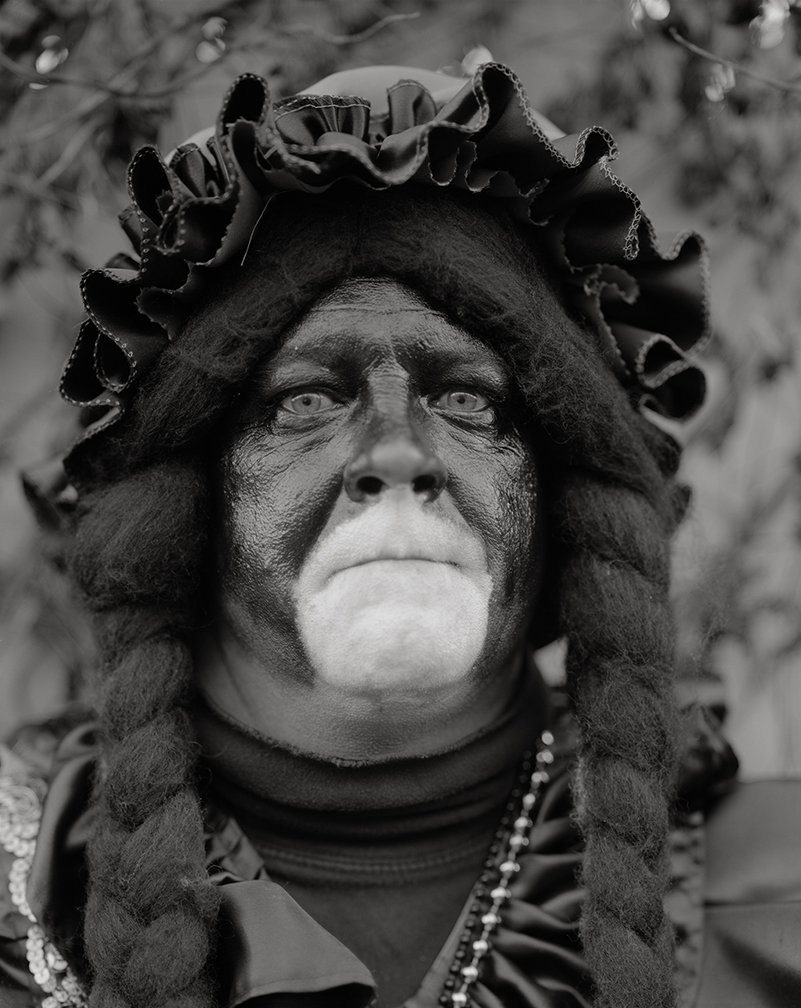 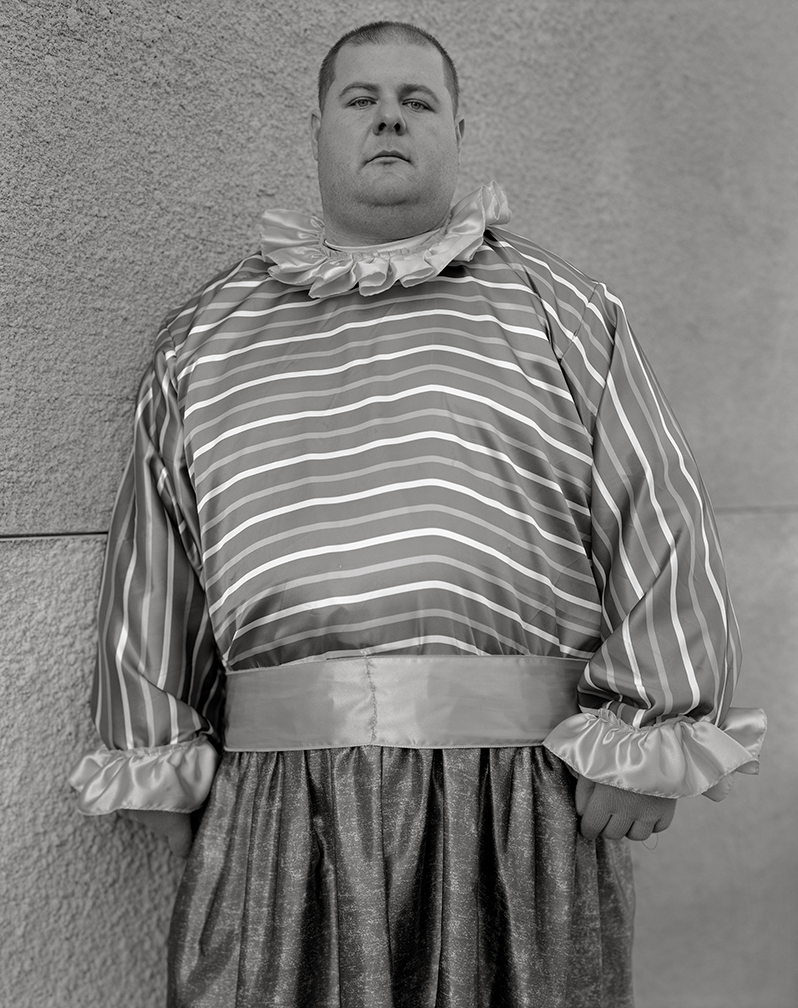 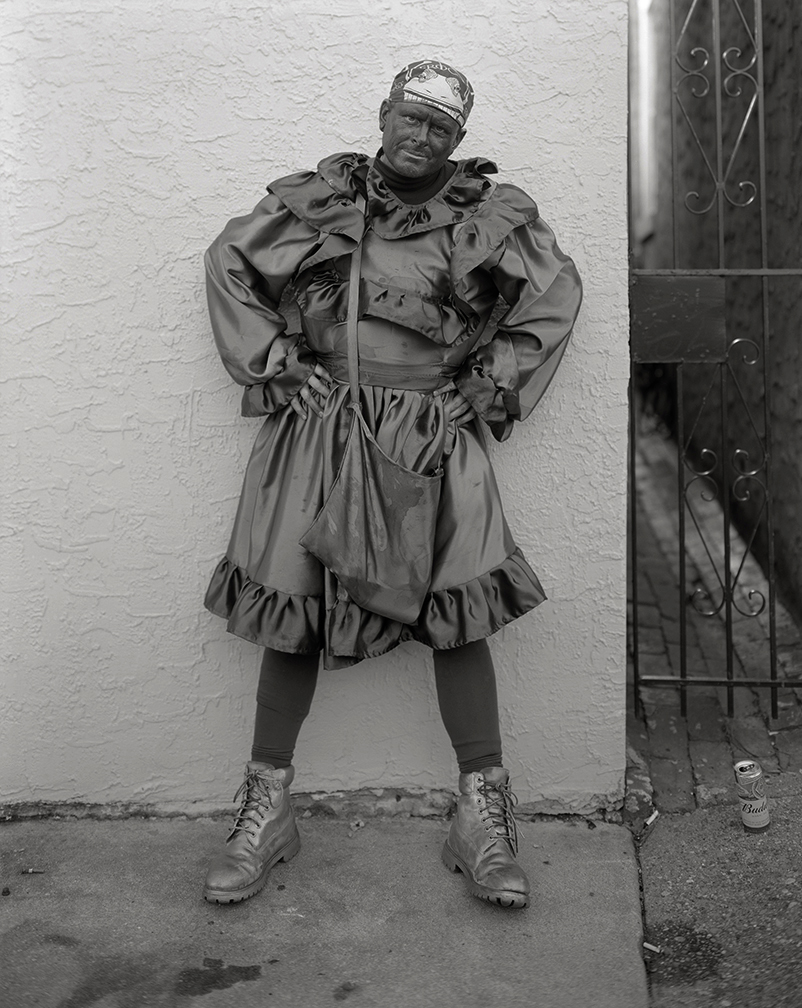 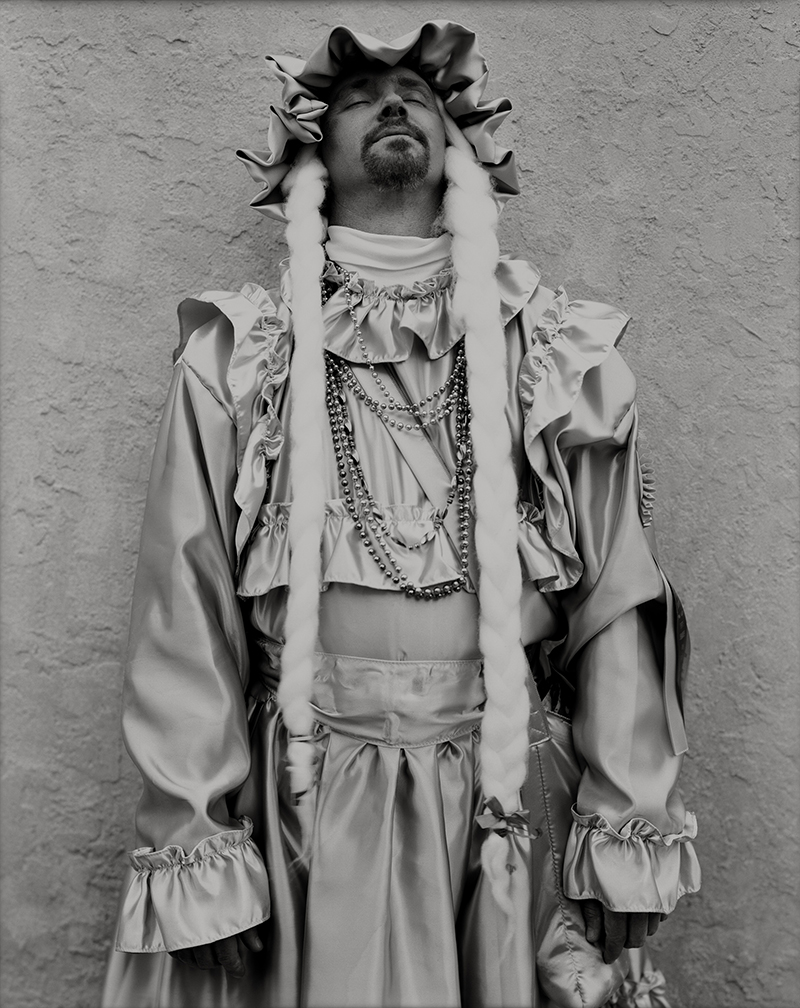