It doesn’t matter what body of work Lori Waslchuk put forth to win the Aaron Siskind Fellowship, her numerous bodies of work all require our attention. A documentary photographer living in Philadelphia, her work has appeared in numerous publications such as Time, Life, Newsweek, and an array of prestigious newspapers such as The New York Times and The Washington Post. She has been exhibitied widely and won the PhotoNola Award at the portfolio reviews in 2007, was a finalist for the 2008 Aperture West Book Prize, and was nominated for the 2009 Santa Fe Prize for Photography.

I am featuring two bodies of work, Grace Before Dying, which focuses attention on a hospice program in the Lousiana State Penitentiary in Angola for prisioners with life sentences: “It reflects how grace offers hope that our lives need not be defined by our worst acts”, and Waterlines, which studies the changing landscape of southern Louisiana after hurricanes Katrina and Rita.

Congratulations, Lori, for paying attention, for looking harder, and for sharing it with the rest of us.

Images from Grace Before Dying 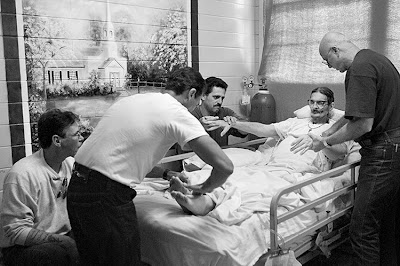