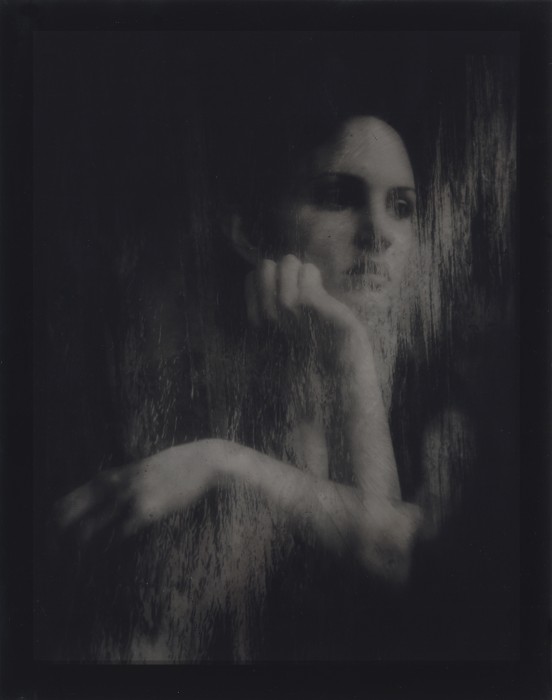 “I believe in Art as a means of transcendence and connection. My images are simply what I’ve made from what I have been given. I hope they have done justice to their sources and that they will, for a moment, ‘stay the shadows of contentment too short lived.” (Sor Juana Inés De La Cruz)—

New Orleans treasure, photographer Josephine Sacabo, is premiering a new body of work, Salutations, at the New Orleans Museum of Art that runs through April 5th, 2015.  Inspired by S. Gayle Stevens sharing that tintypes could be created from pre-existing negatives, Josephine began to experiment with collaged and distorted photographic images creating a new series of wet collodion images on metal, a process that dates back to the 19th century.

Born in Laredo, Texas, in 1944, Josephine was educated at Bard College in New York. Prior to coming to New Orleans, Sacabo lived and worked extensively in France and England. Her earlier work was in the photo-journalistic tradition and influenced by Robert Frank, Josef Koudelka, and Henri Cartier-Bresson. She now works in a very subjective, introspective style, using poetry as the genesis for her work. Her many portfolios are visual manifestations of the written word, and she lists poets as her most important influences, including Rilke, Baudelaire, Pedro Salinas, Vincente Huidobro, and Juan Rulfo, Mallarmé, and Sor Juana Ines de la Cruz. Her images transfer the viewer into a world of constructed beauty.

During her 36-year career her work has been featured in over 40 galleries and museum exhibitions in the U.S., Europe and Mexico. She has been the recipient of multiple awards and is included in the permanent collections of the George Eastman House, the International Center of Photography, the Metropolitan Museum of Art, and La Bibliothéque Nationale, Paris, France. Sacabo divides her time between New Orleans and Mexico. Both places inform her work, resulting in imagery that is as dreamlike, surreal, and romantic as the places that she calls home. 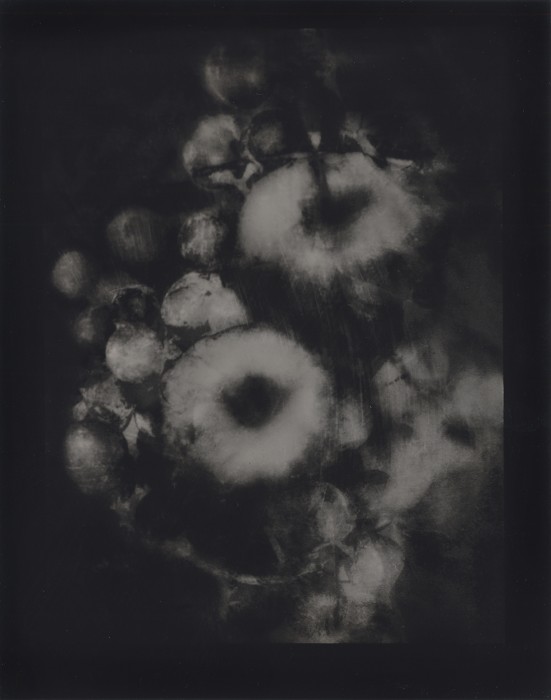 To loneliness, the reef, the star
To anything that has come to earn
The blank white canvas of our care.
– Mallarmé

For the first time, I became enchanted by a process, and that was the motivation as opposed to a literary text. This was not about a narrative but about an image becoming an object, encased as in glass, permanent and solemn.

I became enthralled by the beauty of the surface. I have often shot objects in a mirror but in this it’s as though you are experiencing them not ‘in’ a mirror but ‘as’ a mirror.

No longer a reflection but a fact.

Their form is that of a retablo–those magnificent expressions of gratitude on tin.

Ultimately these are my expressions of gratitude to my subjects–on a mirrored substrate, meant to outlast the fleeting perceptions at their core. 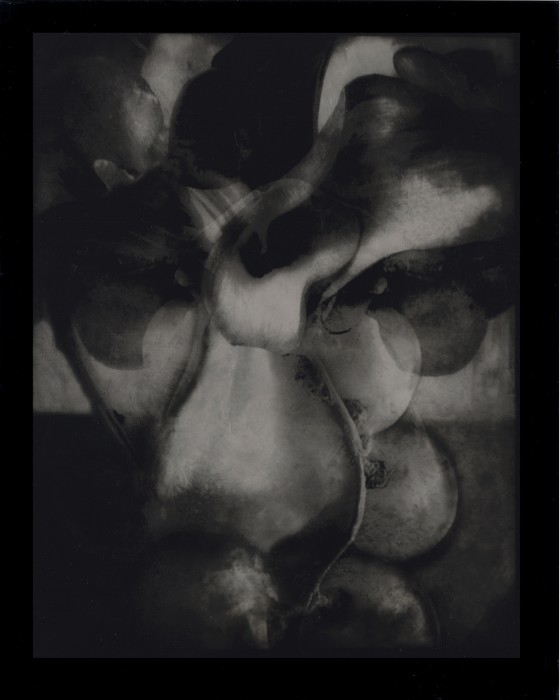 To loneliness, the reef, a star.
To anything that has come to earn
The blank white canvass of our care.
From Salutation, by Stéphane Mallarmé

In a career marked by extensive experimentation with different kinds of photographic media, Josephine Sacabo (American, b. 1944) has repeatedly challenged assumptions about the documentary nature of the photograph. In her newest body of work, this challenge takes center stage: combining collaged and distorted photographic images, Sacabo creates a world that is barely recognizable as such, hovering like a memory or a dream in the space between the concrete and the ineffable.

Throughout the work, half-materialized visions of certain elements appear and reappear—an apple, a bird, a window, the female form—as if to suggest some kind of narrative is buried under the layers of fractured representation. But the project as a whole resists any linear reading, and instead concerns itself with establishing an enigmatic set of conditions—loss, solitude, melancholy, nostalgia, etc.—that create a space for interpretation. Rather than tell any particular story, these works set the stage for a number of potential stories that hinge upon these broader concepts. In balancing on the threshold between the real and the surreal, these images favor the poetic over the prosaic and the symbolic over the literal, much like the Mallarmé poem after which the project is named.

The works in Salutations were produced using the wet collodion process on metal plates, a method that dates back to the nineteenth century. In combining new images with a historic process, Sacabo creates objects that seem to exist somewhere in between, as almost timeless relics, at once ancient and modern. Sacabo’s choice of this process was also driven, however, by the physical properties of the medium. As objects with substantial weight and dimension, their physicality cannot be overlooked, forcing us to engage with these works as both images and objects. As each plate is viewed, the reflective surfaces create an ephemeral experience: like the subjects in the works, which often seem on the verge of a metamorphosis, the images are also fugitive—shifting, materializing, and disappearing according to the position of the viewer.

Sacabo’s title for the project is as ambiguous as the images themselves. A “salutation” is most commonly thought of as a greeting, but the term is equally applied to the acknowledgment of someone’s departure. Whether coming or going, however, a salutation requires two figures in order to function. Perhaps then, the title refers to the fact that this body of work requires that fleeting viewing experience, the interaction between artist and observer, in order to fully come into being. Salutation operates in these interstices, the space between photography and fiction, real and surreal, past and present, viewer and viewed.

The works presented here are wet collodion tintypes, made in 2014. The exhibition is generously underwritten by Donna and Benjamin M. Rosen. 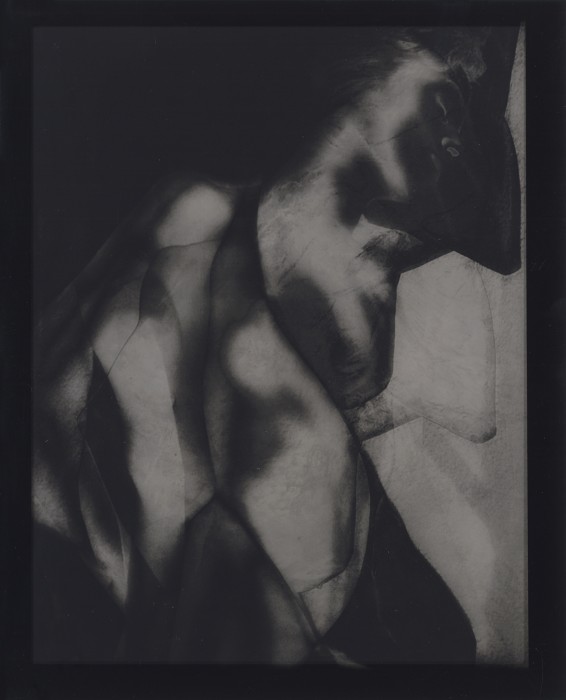 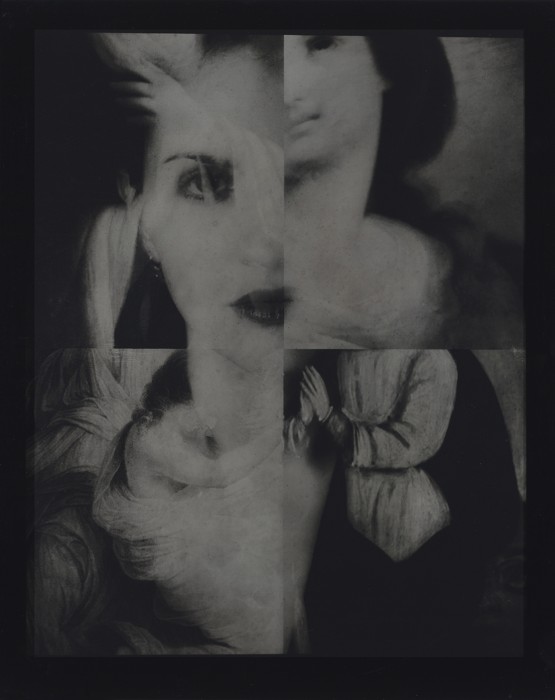 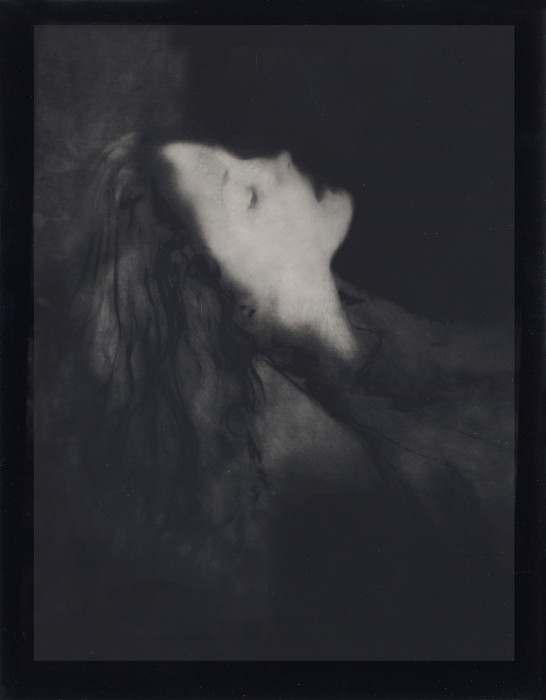 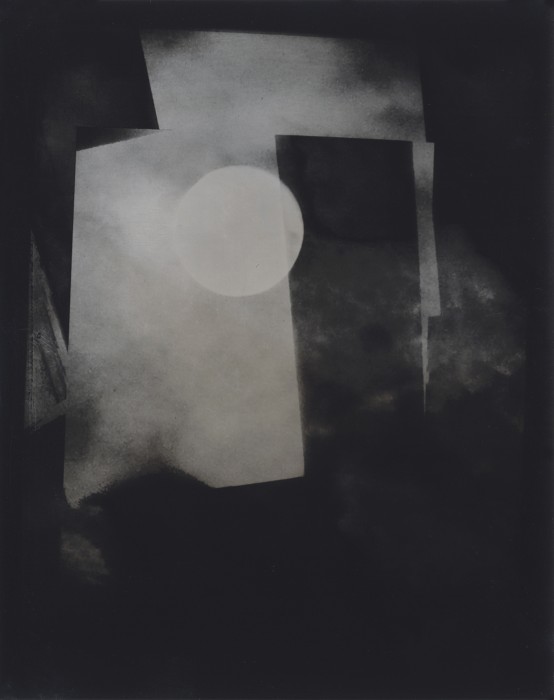 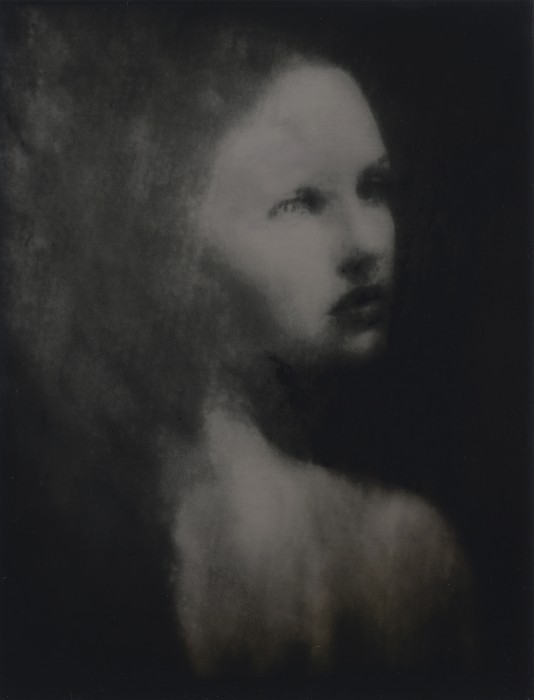 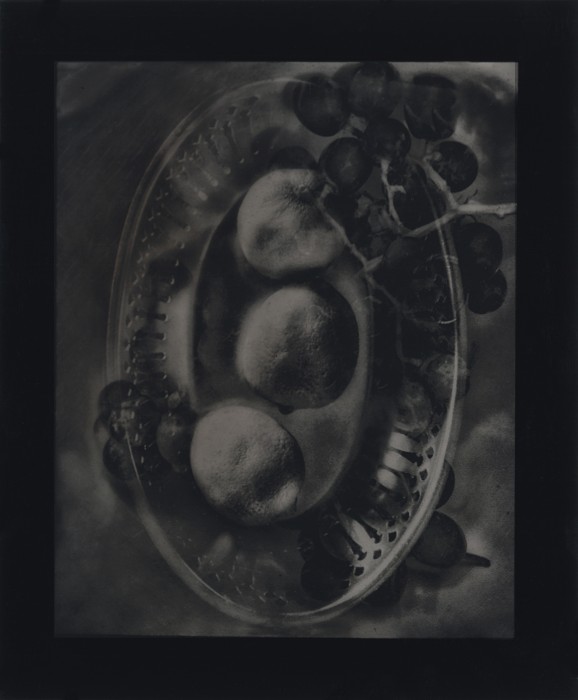 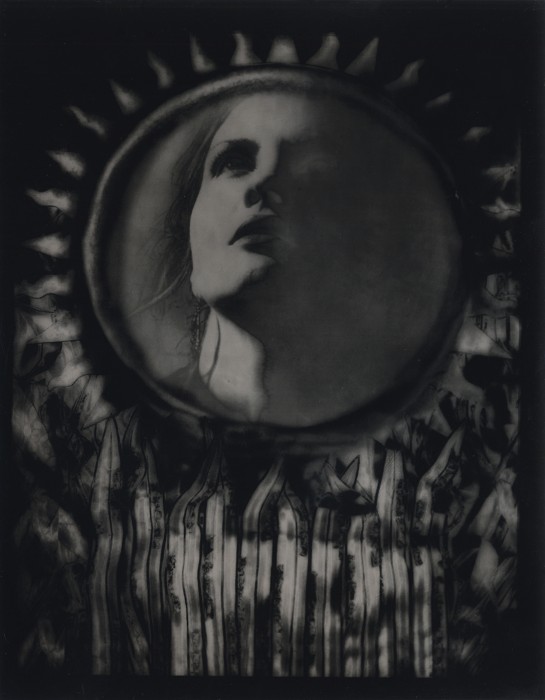 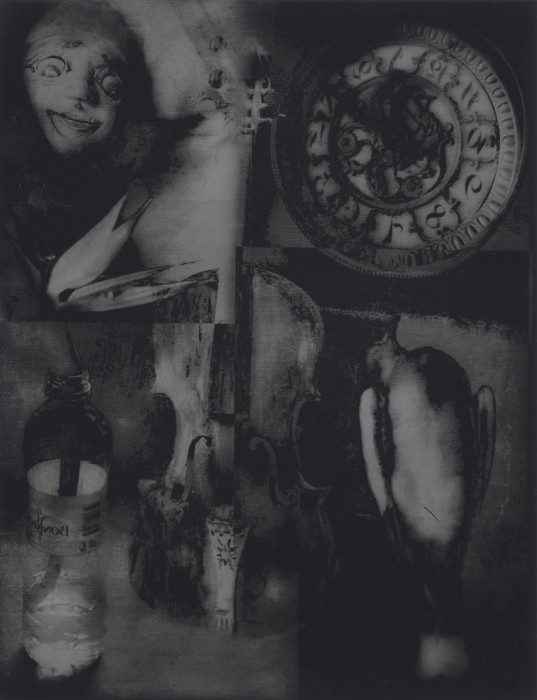 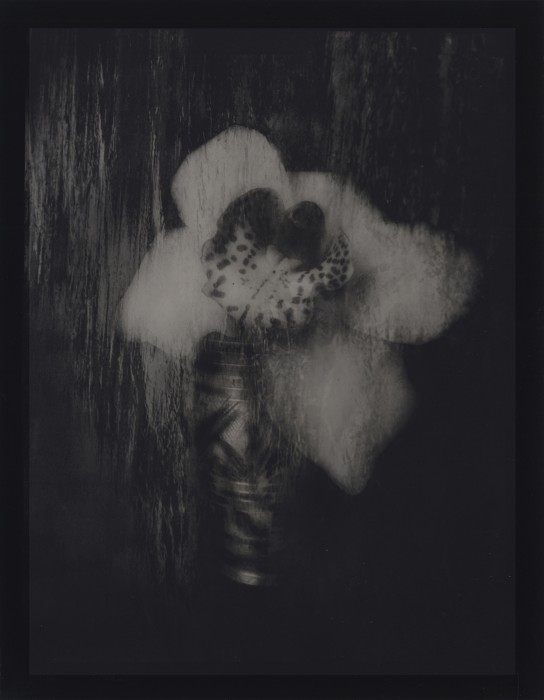 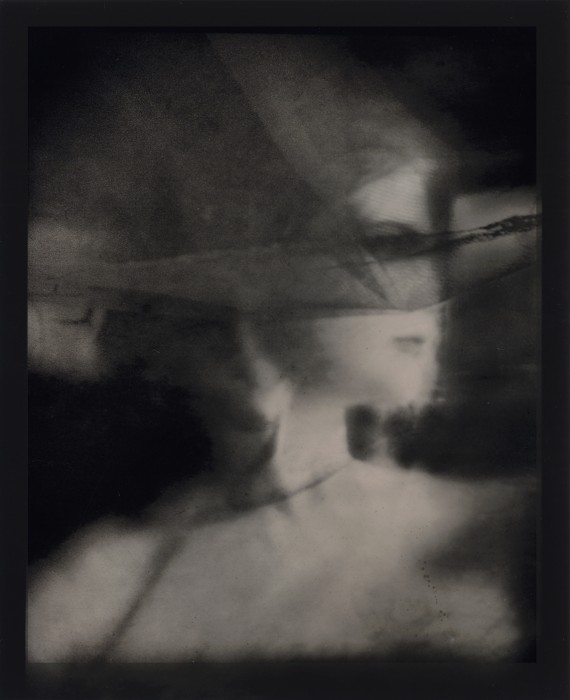 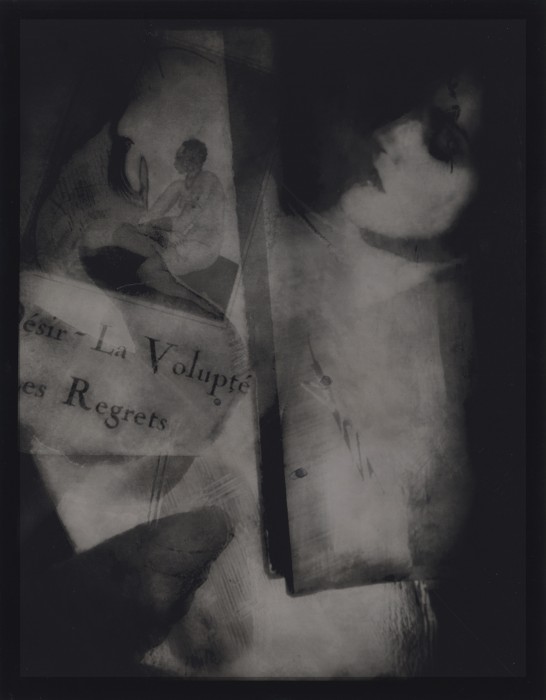