Tom Atwood: Kings & Queens in Their Castles by Aline SmithsonApril 2, 2017 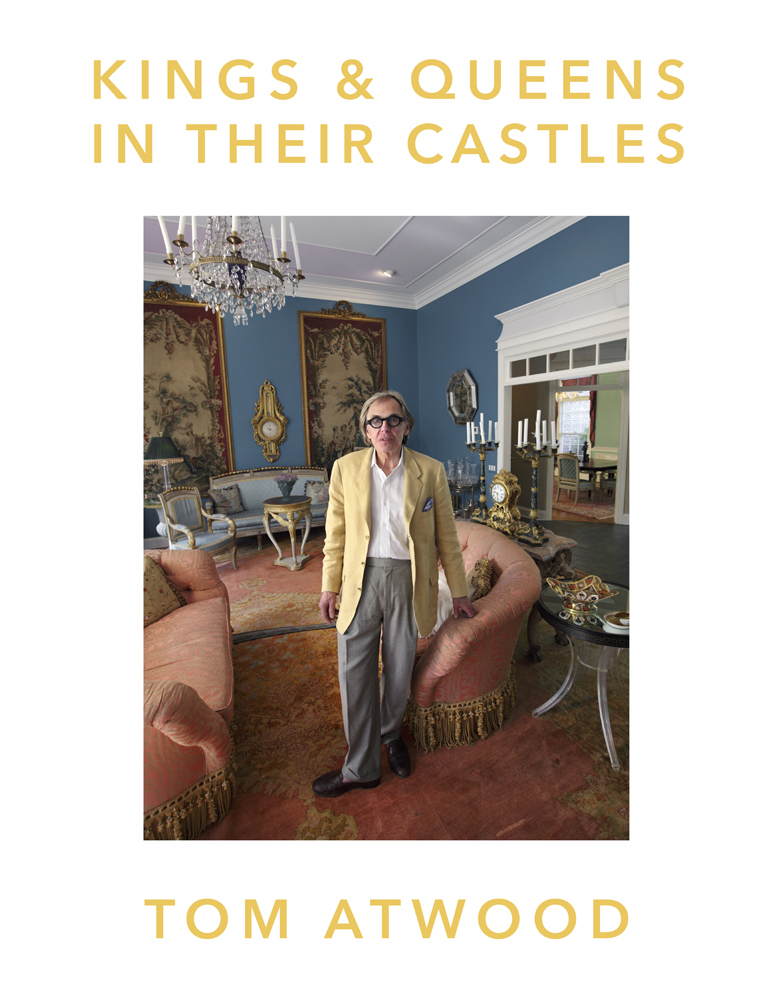 “The access Tom Atwood tirelessly worked to achieve is absolutely astonishing.  With charm, pizzazz, and sheer determination, Atwood captures the intimate lives of many of the most fascinating and respected members of our LGBTQ community.  Bravo!”
– Brian Clamp, ClampArt

Tom Atwood has spend fifteen years and many airline miles photographing more than 350 of LGBTQ Americans, crisscrossing 30 states to enter the front doors of a population that simply need to be seen.  The result of his labors is a new monograph, Kings & Queens in Their Castles, recently published by Damani. This comprehensive documentation of community is an important historical collection for future generations, but subject matter aside, these are remarkable environmental portraits.  I spent a long time going through his book and website and salute his efforts and talents. Tom will be having a book launch party at the ClampArt in New York on April 27th from 6-8pm. Books can be purchased and additional images can be seen on Tom’s site.

I shoot subjects at home because our natural habitats bring out our true character,”Atwood explains. “There is a common LGBTQ sensibility that sets us apart that I wanted to recognize and celebrate, says Atwood. “ This sensibility shares an outlook with the sensibility of creative and cultural leaders —an awareness of difference, of other, of possibility —an avant-garde mindset.” One fascinating phenomenon the series explores is just how many creative and cultural leaders are LGBTQ. “”Alternative sexuality or gender practices and extraordinary talent in arts and culture often seem to be intertwined,” Atwood explains. Many of the book’s subjects are kings or queens of their professions, and many of the interiors are visually rich in the way that medieval decorations were —strong, deep colors, and lavish fabrics.

Tom Atwood has shot over 100 luminaries such as Hilary Swank, Buzz Aldrin and John Waters. He won Photographer of the Year from London’s Worldwide Photography Gala Awards, first place in Portraiture in the Prix de la Photographie Paris and has won over 30 other awards. Atwood’s work has exhibited at the Museum of Photographic Arts, the George Eastman Museum, the Center for Fine Art Photography and several other institutions. His work exhibits at various galleries, most recently ClampArt, Steven Kasher, Louis Stern and PDNB.Atwood’s work has been featured in over 150 publications including The New York Times, Los Angeles Times, New Yorker, Art Newspaper, Elle and PDN.  And he has appeared on Sirius, CBS and other networks.Atwood has a Bachelors from Harvard and a Masters from Cambridge (England). 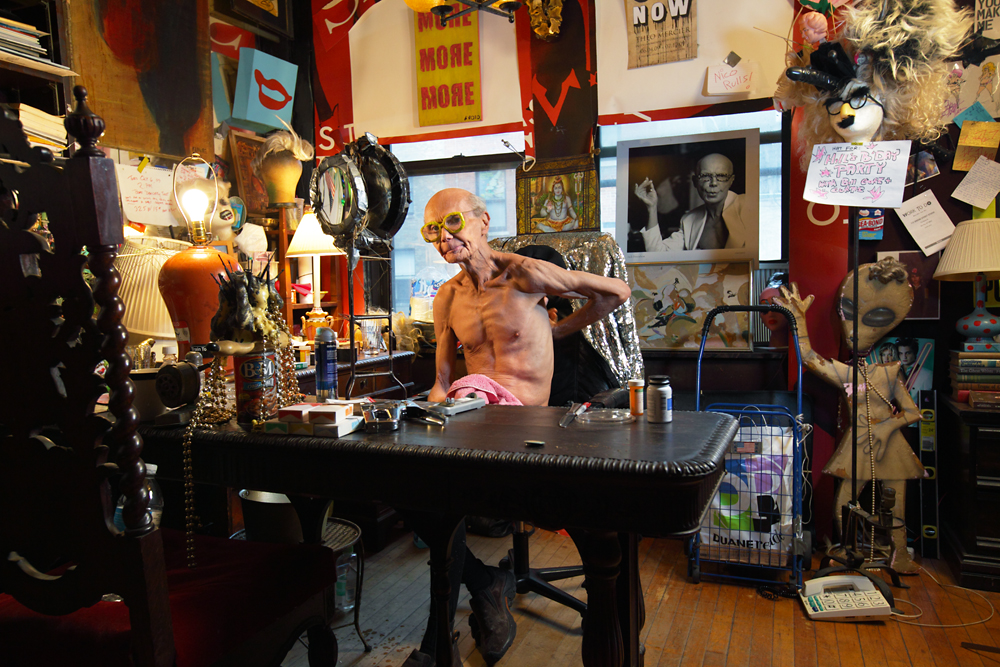 Kings & Queens in Their Castles

Kings & Queens in Their Castles is an extensive photography series exploring the LGBTQ experience in the USA. Over 15 years, I photographed more than 350 subjects at home nationwide (with over 160 in the book), including nearly 100 luminaries (with about 60 in the book). With individuals from 30 states, the series offers a window into the lives and homes of some of America’s most intriguing and eccentric personalities.

The title, in addition to paying tribute to our dazzling drag kings and queens, is a nod to aristocracy from history reputed to have engaged in alternative sexuality or gender practices or sensibilities. Among these are Japanese samurai knights, Roman emperor Hadrian, French kings Henri III and Louis XIII, Alexander the Great, England’s King Edward II, King James I of England and Scotland, Queen Christina of Sweden, Prince Eugene of Savoy and King Ludwig II of Bavaria. Not to mention King Frederick II of Prussia, with his Sanssouci palace adorned with gay-themed antiques.

I decided to photograph LGBTQ Americans because I felt there was a need for a contemplative photo series of the community. Many LGBTQ series depict scantily-clothed young subjects romping through the forest or lounging on the beach. There was a need for a series highlighting our manifold personalities and backgrounds. And I wanted to create a body of work that would strengthen the identity of and be a source of pride for the LGBTQ community, as well as feature role models. 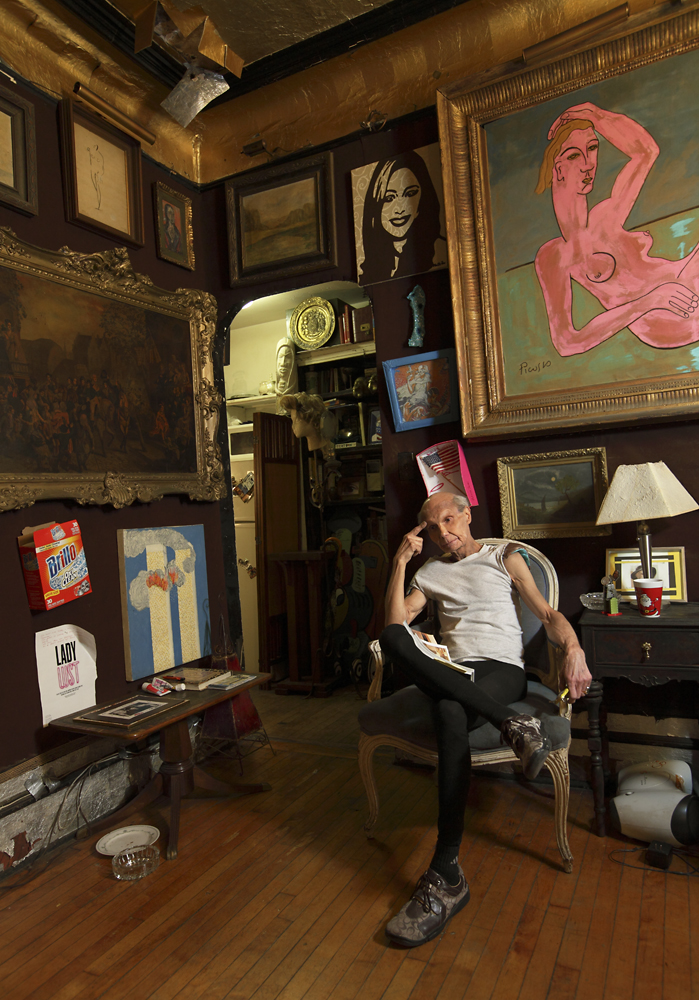 Today, in terms of the modern civil rights movement, it’s helpful to highlight that LGBTQ folks are in many ways like everyone else, and as diverse as society as a whole. Yet on another level, there is a common LGBTQ sensibility that sets us apart that I wanted to recognize and celebrate. This sensibility shares an outlook with the sensibility of creative and cultural leaders—an awareness of difference, of other, of possibility—an avant-garde mindset. One fascinating phenomenon my series explores is just how many creative and cultural leaders are LGBTQ. We may be disproportionately represented in the arts, culture and entertainment.

This seems as true now as it may have been throughout history. Homosexuality or a gay sensibility appears in art from virtually every culture and time period—from ancient Peruvian ceramics to nearly all Greek art forms to fourteenth century Japanese art. Moreover, examples of LGBTQ individuals excelling in art and culture abound. From Native American berdaches, with their exceptional aptitude for crafts, to da Vinci, Michelangelo, Cadmus, Warhol, Rauschenberg and Hockney. From writers such as Sappho, Oscar Wilde and Gertrude Stein. To architects such as Philip Johnson. Actors such as Rock Hudson and Jodie Foster. Journalists such as Don Lemon, Anderson Cooper and Rachel Maddow. Fashion designers such as Yves Saint Laurent and Tom Ford. And of course, photographers such as Bernice Abbott, Minor White, Horst, Mapplethorpe, Leibovitz, LaChapelle and Opie. Alternative sexuality or gender practices and extraordinary talent in arts and culture often seem to be intertwined. 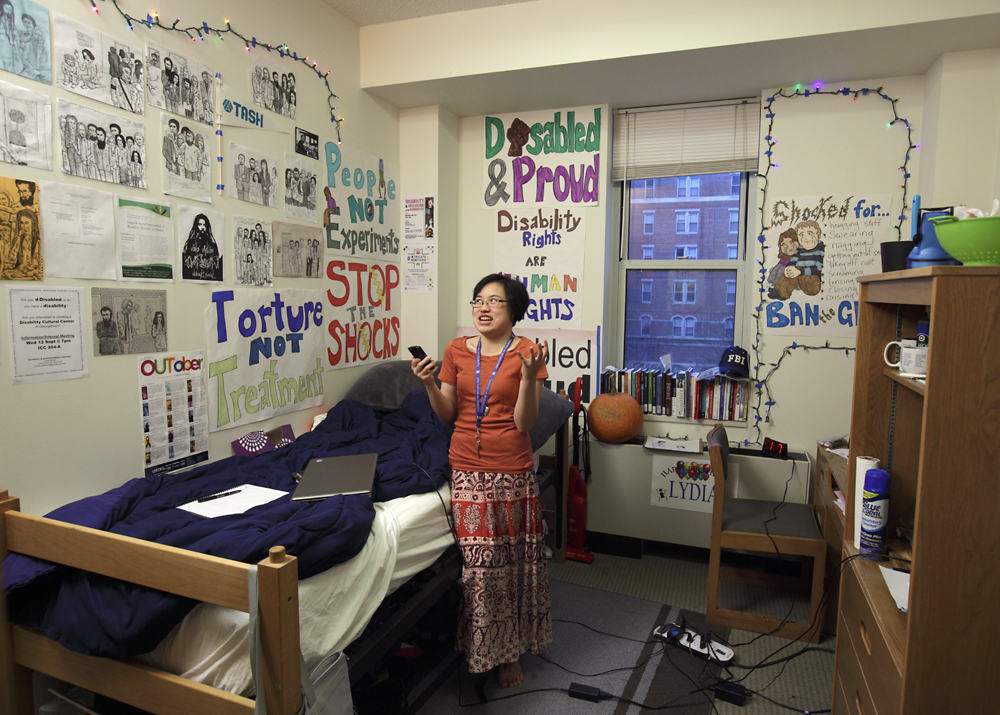 So the assemblage of LGBTQ creative and cultural leaders in my book should come as no surprise. Some viewers may love photographs of celebrities and some may find them tiresome. Personally, I find high profile subjects and everyday individuals equally interesting. Yet I can understand why many people are particularly drawn to celebrity photographs—we already have a history with many of these subjects. If we loved an actor’s movie or a writer’s book, it would only be natural to want to know more about their lives.

My photographic style has a hint of camp, a conscious choice in celebration of—as Susan Sontag pointed out—the intersection of a gay sensibility and camp. As a photography and art history autodidact, most of my style and technique I developed through trial and error. My approach evolved organically over time, as a confluence of related interests in psychology, theater, architecture, urban planning and drawing. It’s been influenced primarily by my life experiences and by the everyday world around me. 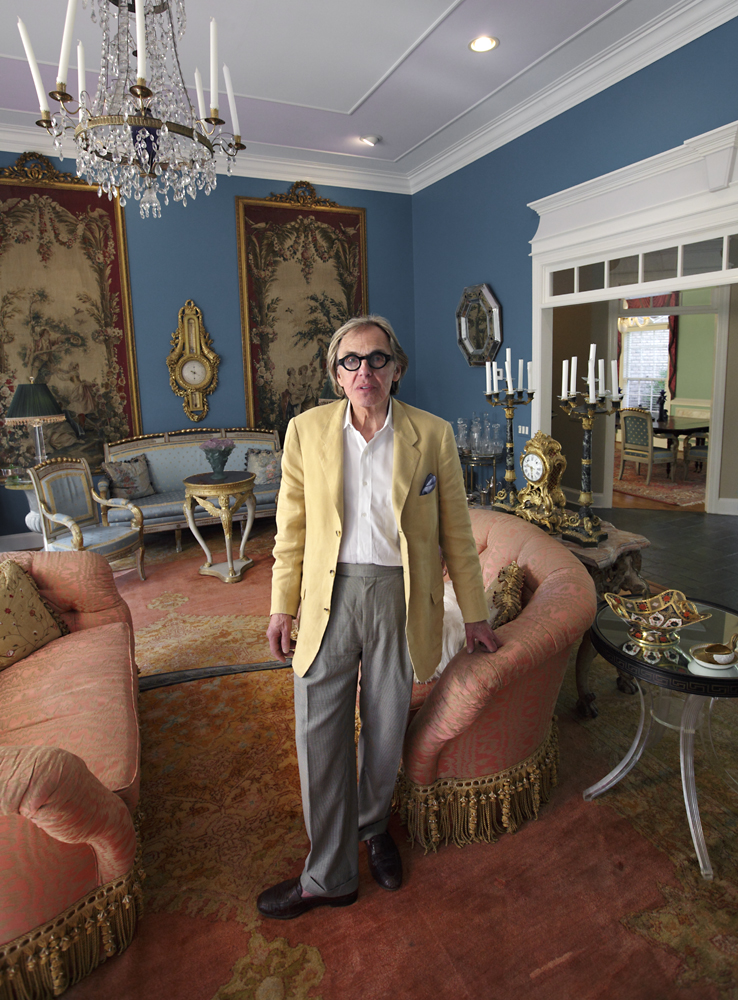 I attempt to distinguish Kings & Queens in Their Castles from other portrait series in a number of aspects. My approach is a blend of portraiture and architectural photography, to illustrate that subjects and environments are a unified fabric. I shoot subjects at home because our natural habitats bring out our character. The LGBTQ person’s home is an extension of him/herself. And for a community sometimes obsessed with image and beauty, our living spaces can also be the ultimate in self-expression. With a flair for design, many of these subjects have crafted playful, often outlandish homes that tell stories about their inhabitants.

I use a wide-angle lens and wide depth of field so that neither subject nor home predominates. Conventional portraiture, on the other hand, tends to emphasize the person, through backgrounds of streamlined simplicity often with a narrow depth of field. I often seek out backdrops and angles packed wall-to-wall with idiosyncratic belongings, paraphernalia and detail, albeit balanced by sweeping exterior shots. Making use of the full color palate, I attempt to uncover what such homes reveal about how multifarious LGBTQ personalities can be. 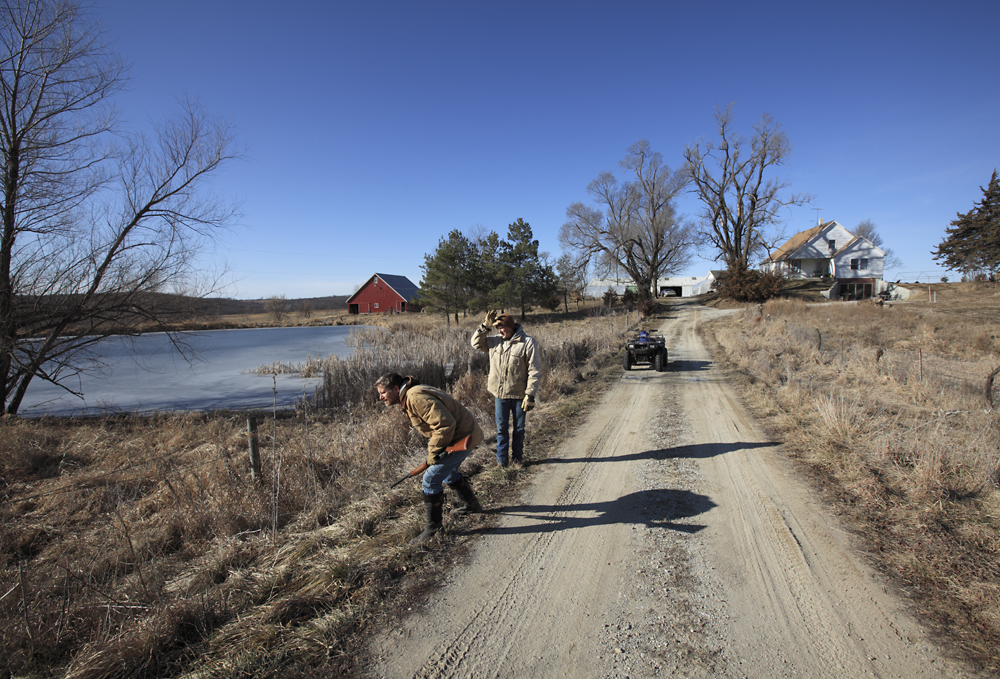 To fully create 360-degree portraits, I photograph people in daily activity—modern day tableaux vivants. I seek out whimsical, intimate moments of everyday life that shift between the pictorial and the theatrical. While the images often have an element of voyeurism, my subjects occasionally look at the camera as in reality, when being photographed subjects are typically aware of a photographer’s presence. I strive for the images to look naturally lit by ambient light, yet most shots are lit with a mixture of tungsten and strobe lights. Almost all shots are hand held (no tripod) and almost all are 35mm digital (although my first book, Kings in Their Castles, was mostly film).

I found subjects through thousands of hours of research, letter writing, phone calls, networking, and posting requests on public message boards and social media groups. The subjects in the series are by no means a representative social, economic or ethnic cross section of LGBTQ America. Yet a broad spectrum of geographies and professions are represented. Alongside creatives such as artists, fashion designers, writers, actors, directors, music makers and dancers, I feature business leaders, politicians, journalists, activists and religious leaders. I include those who keep our country running, such as farmers, beekeepers, police officers, doctors, chefs, bartenders and innkeepers. I exhibit some miscellaneous athletes, students, professors, drag queens and socialites. As well as a cartoonist, barista, poet, comedian, navy technician and paleontologist. I also showcase urban bohemians, beatniks, mavericks and iconoclasts, many of whom blossomed in the 1960s and 1970s but seem to be slowly disappearing. It should be noted that a few people in the series are straight friends who happened to be visiting subjects when I was shooting. 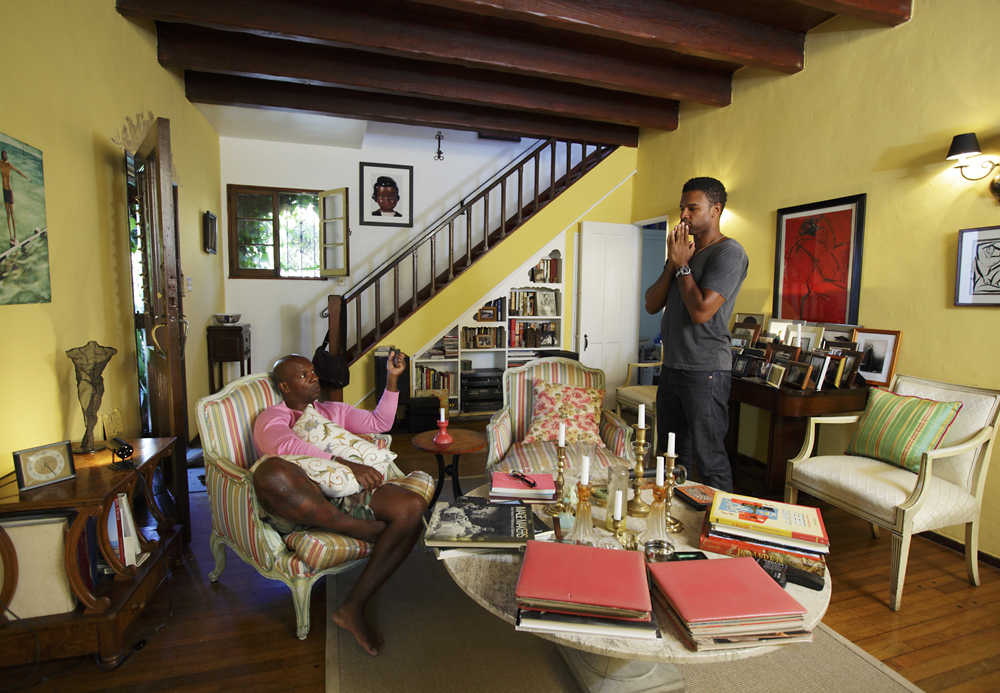 Ultimately, I record the personal landscapes of these subjects for them to become works of art in their own right. With elements of both formal portraiture and informal snapshots, my images attempt to dance the line between beauty and chaos, sometimes simultaneously comforting and unsettling. I hope that you find the sum of these photographs inspiring and moving and that they arouse in you as much delight and curiosity as they do in me. I invite you to view dozens more photographs at www.TomAtwood.com. -Tom Atwood 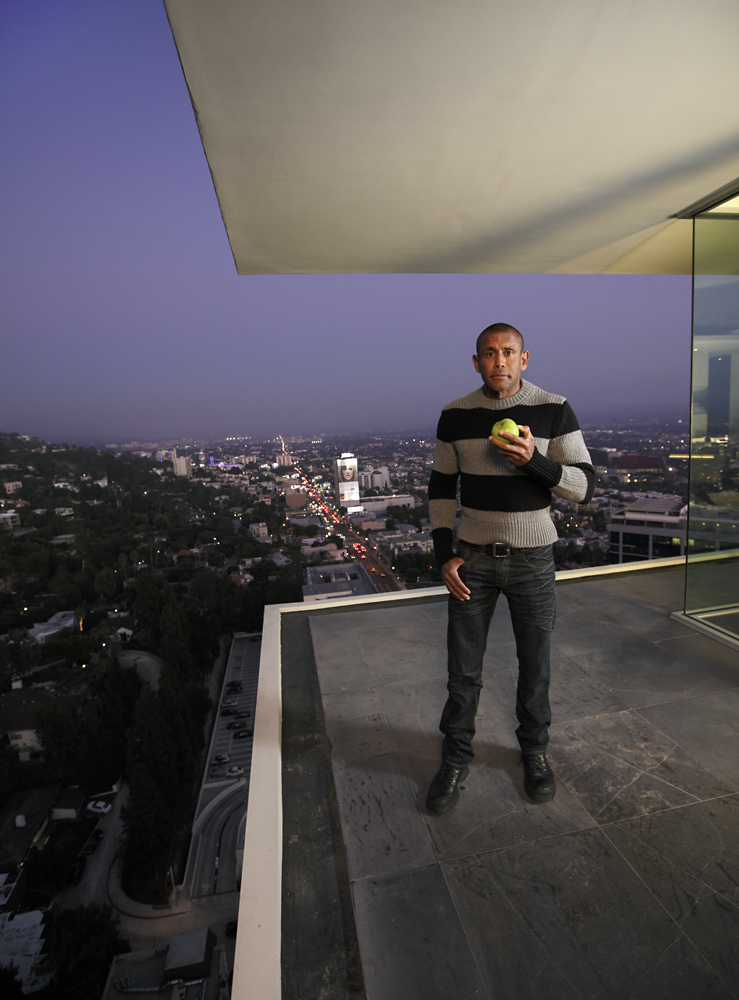 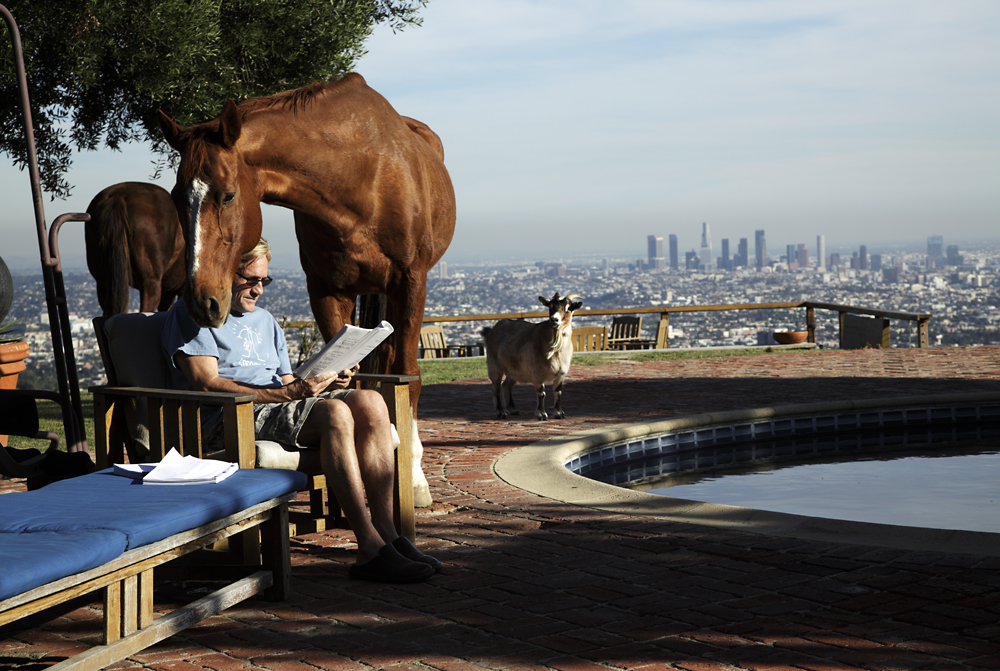 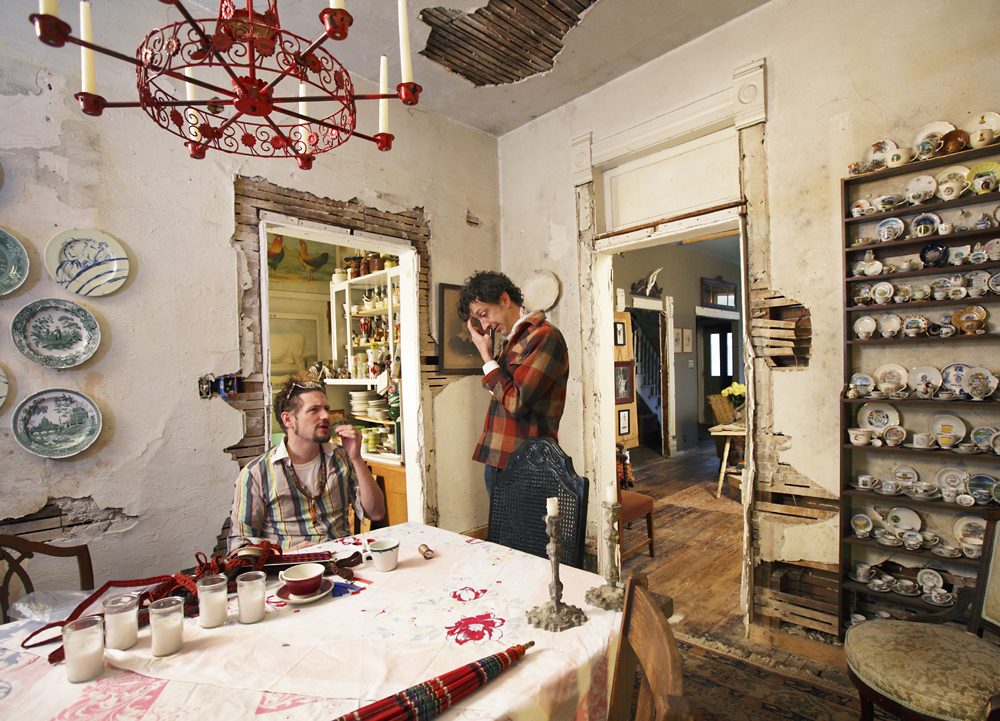 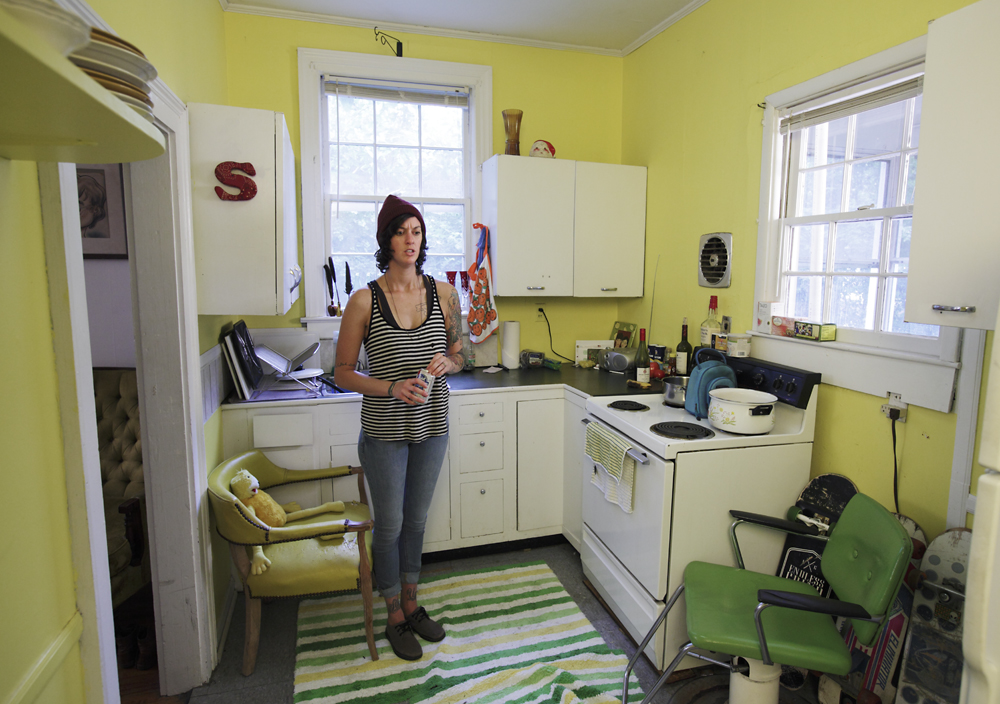 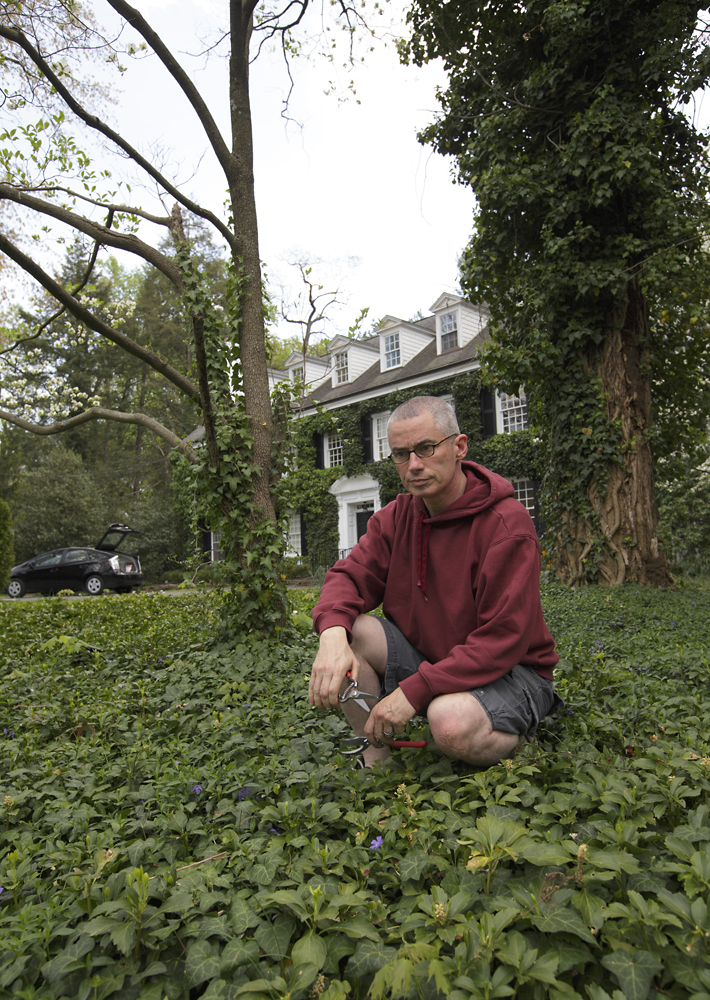 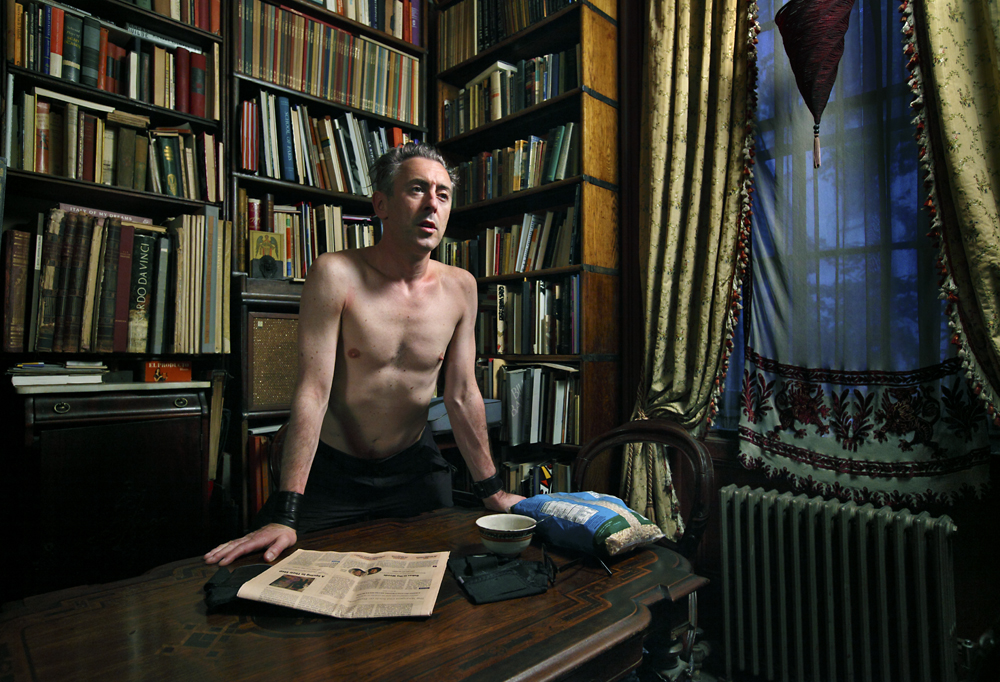 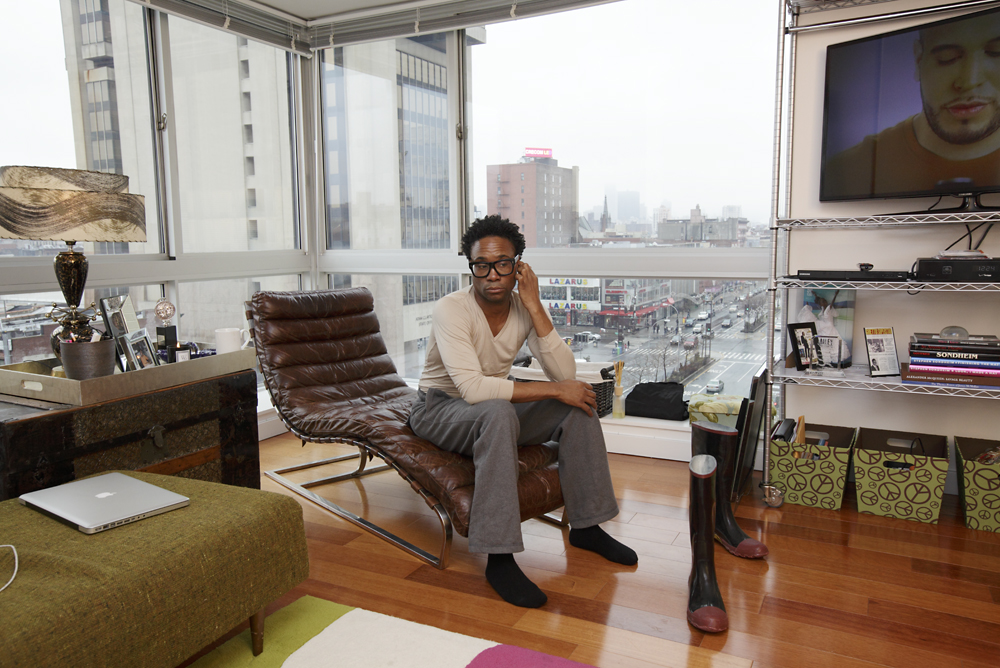 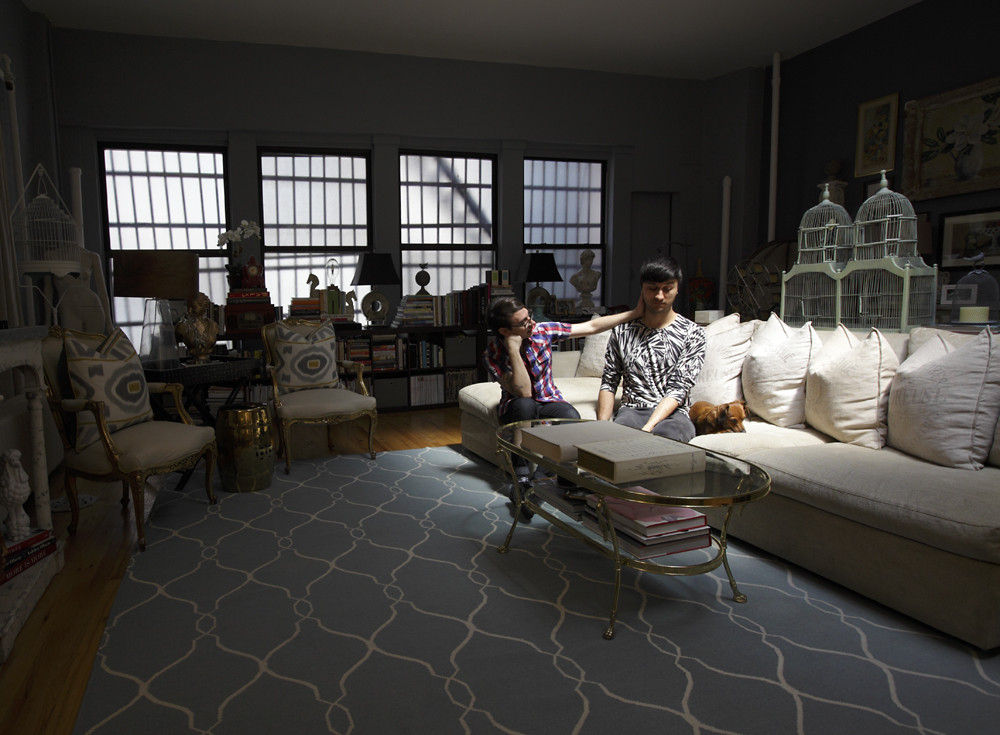 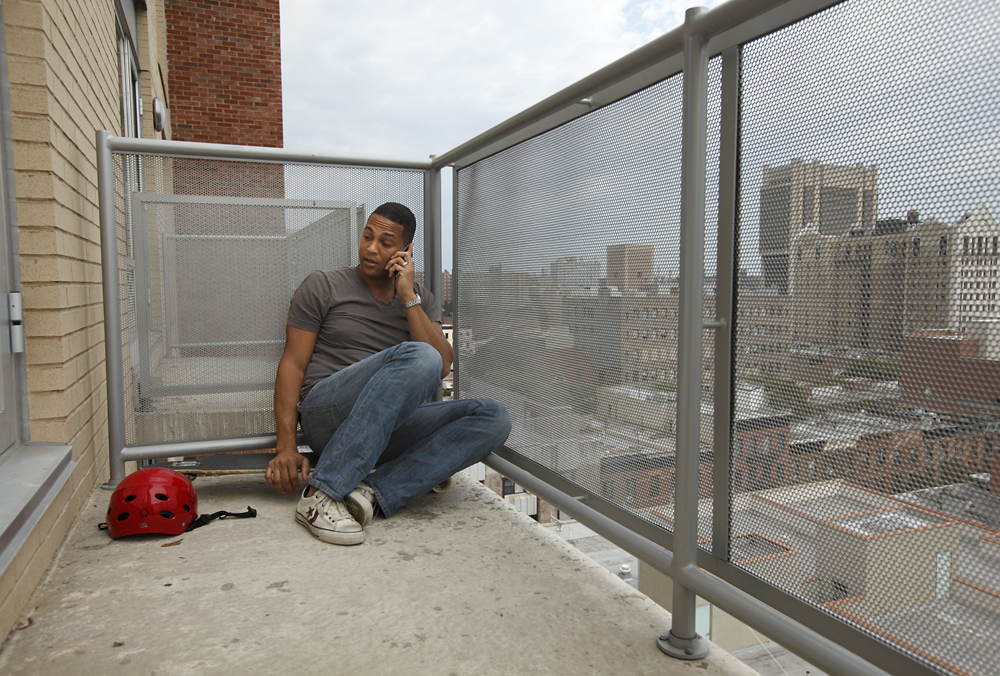 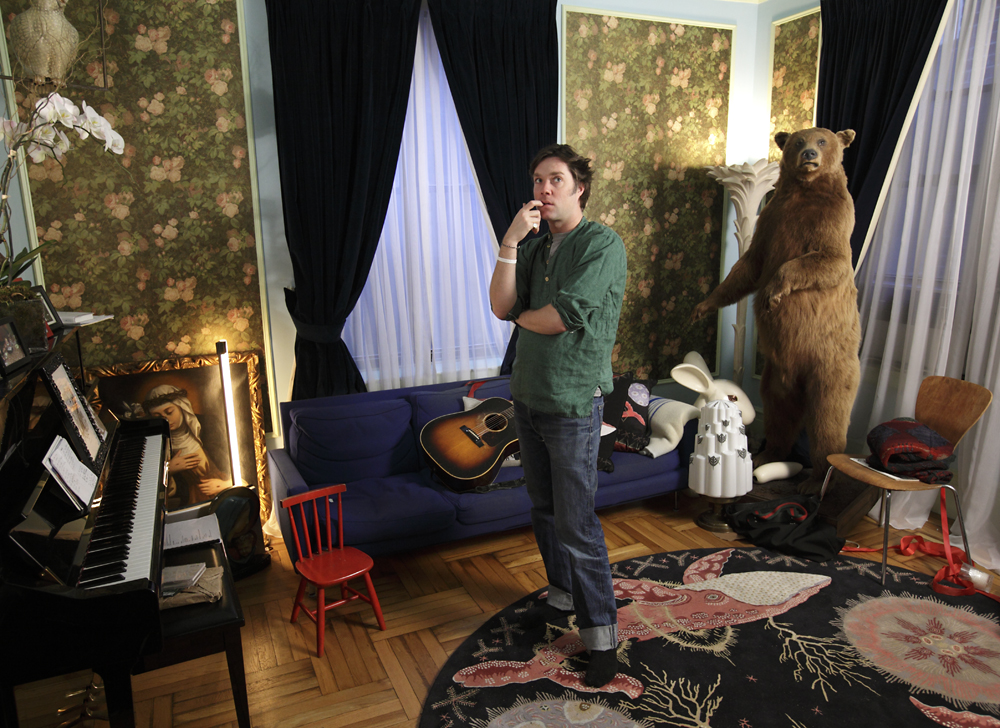 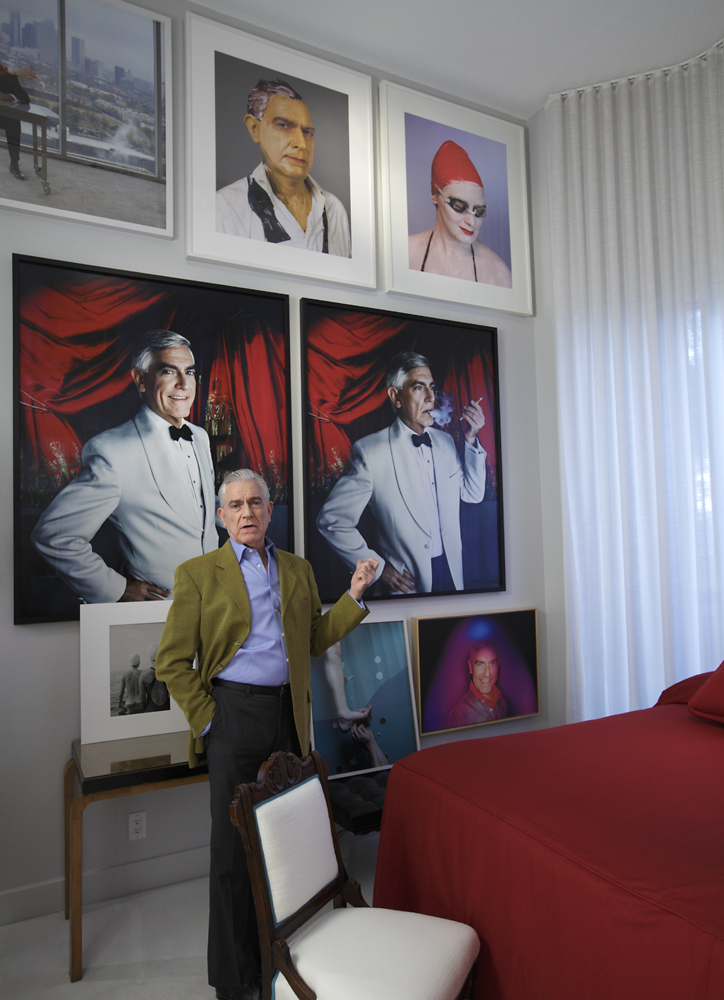 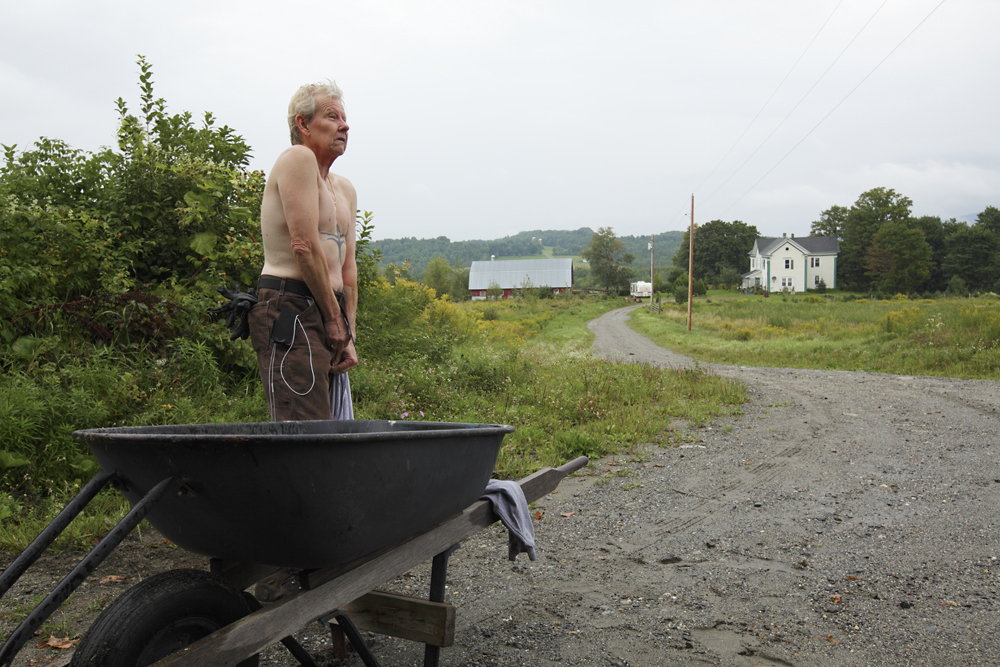 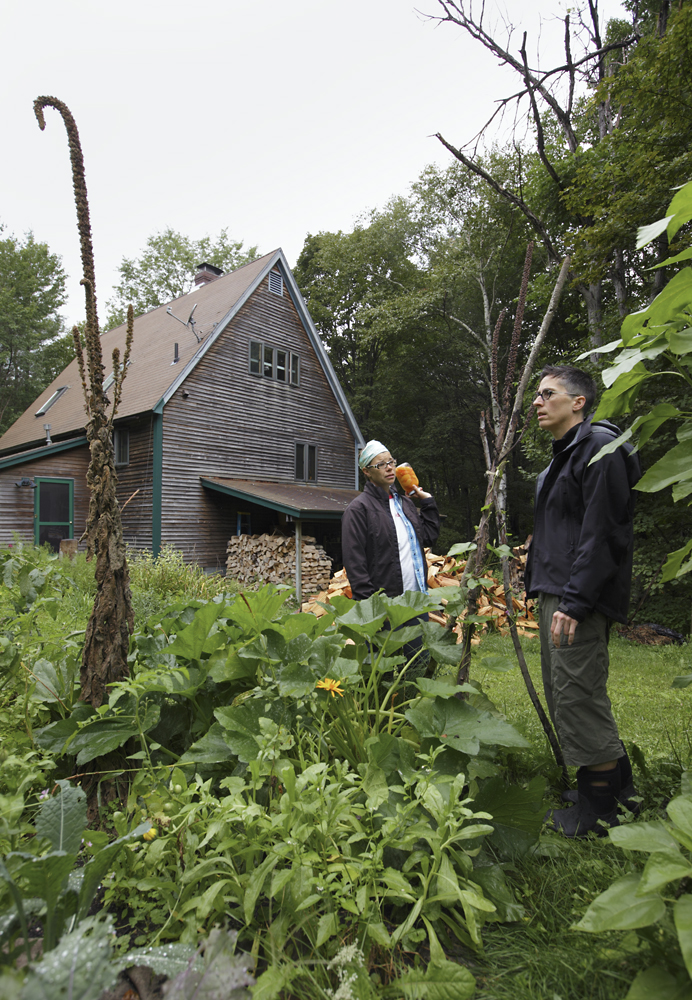 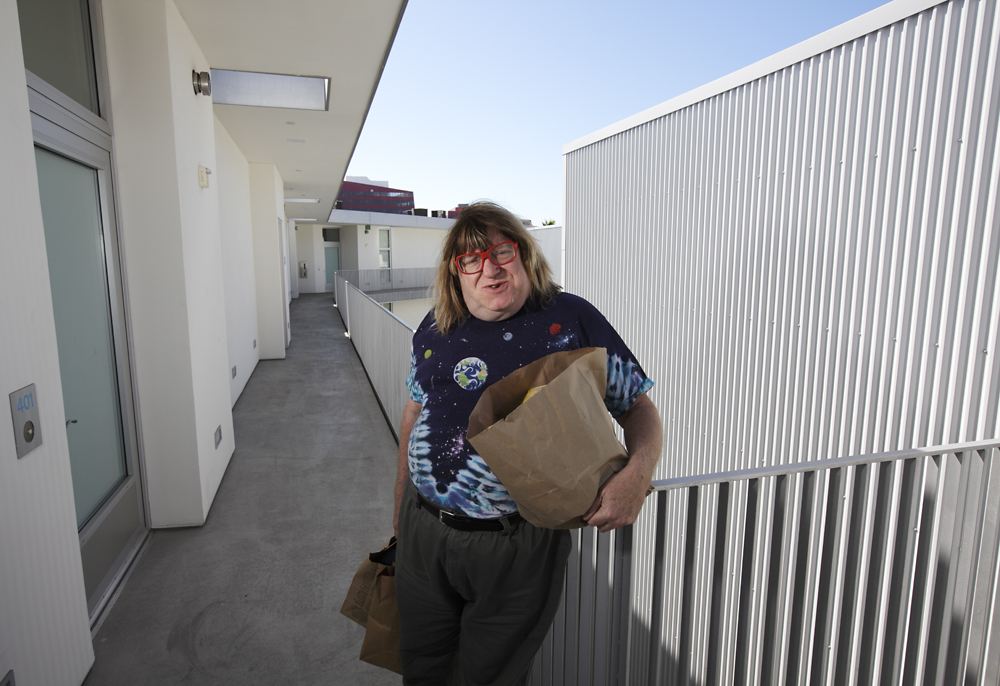 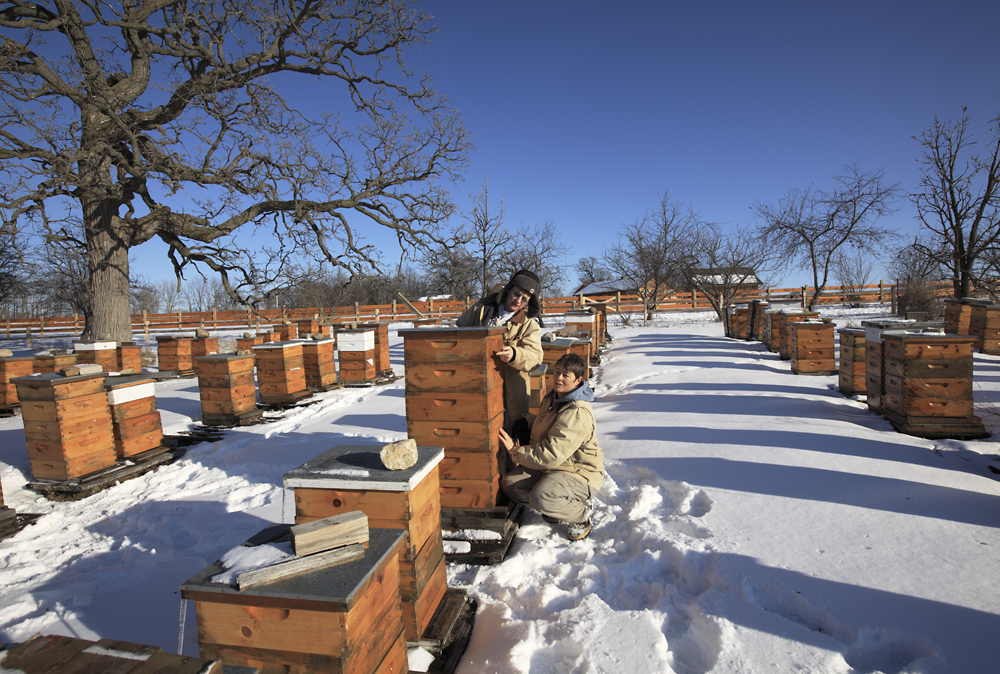