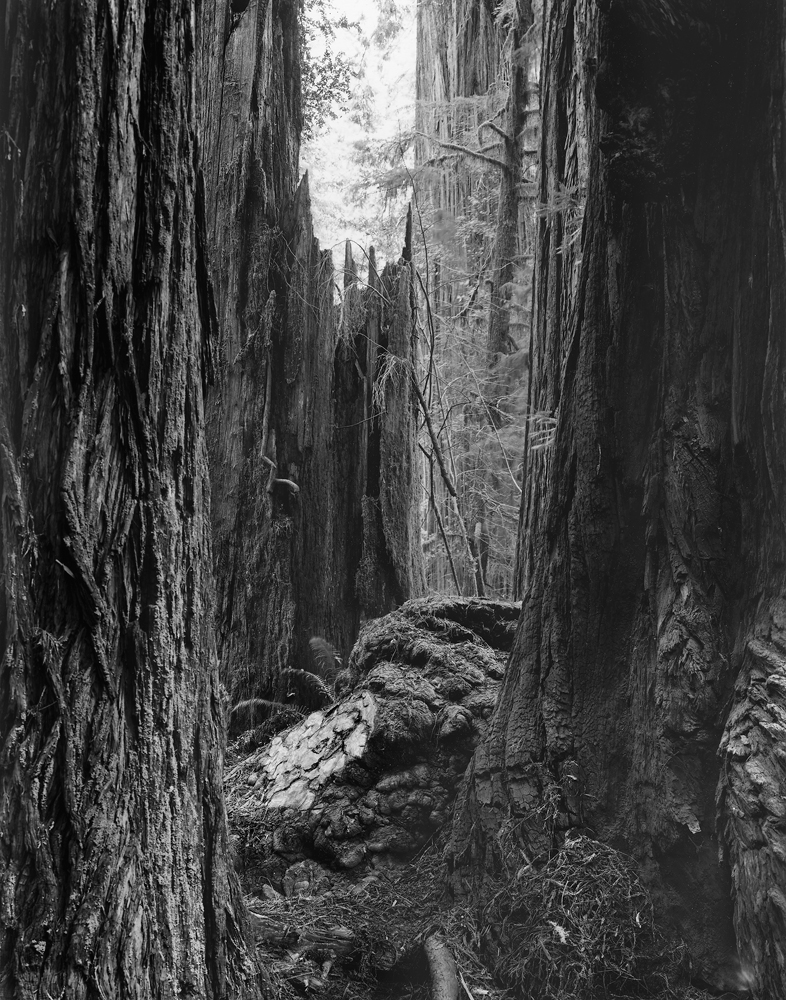 “A grove of giant redwoods or sequoias should be kept just as we keep a great or beautiful cathedral.” – Theodore Roosevelt

Kirk Crippens and Gretchen LeMaistre‘s new project and book, Live Burls, is the perfect example of what photographers can do to draw attention to an environmental injustice and create change. Just as with African elephant slaughter for ivory, our magnificent Redwood trees have been damaged and poached, as Kirk and Gretchen state, for entitled consumption. In 2013, an alarming number of Redwood National Park redwood trees were targeted and shorn of their knobby protrusions, called burls. The trees were disfigured by thieves aiming to sell the distinctive burl wood on the black market. Concerned over the welfare of these iconic treasures, Kirk and Gretchen worked with park rangers to access each damaged tree. From 2013 to 2016, they made many visits to the redwood forests of Humboldt County, California, observing the trees in changing light and seasons.

The result of this documentation is a new monograph, Live Burls, published by Schilt Publishing, of scanned silver gelatin print made from black-and-white 8×10 negatives–their intent was to retain their darkroom work as an important part of the presentation. The book can be purchased directly from Schilt HERE and from Amazon HERE. The release of this book as garnered numerous exhibitions and book signings which are noted at the end of this post.

Based in San Francisco, Kirk Crippens and Gretchen LeMaistre have worked on collaborative projects and individual works for over a decade. Live Burls prints are held in the collections of the Smithsonian Institution, Washington D.C., USA; the Museum of Fine Arts in Houston, USA; and RayKo Photo Center, San Francisco, USA. In 2016 and 2017, Live Burls was exhibited at Candela Gallery, Richmond, VA, USA; and Datz Museum of Art, Gwangju, South Korea. 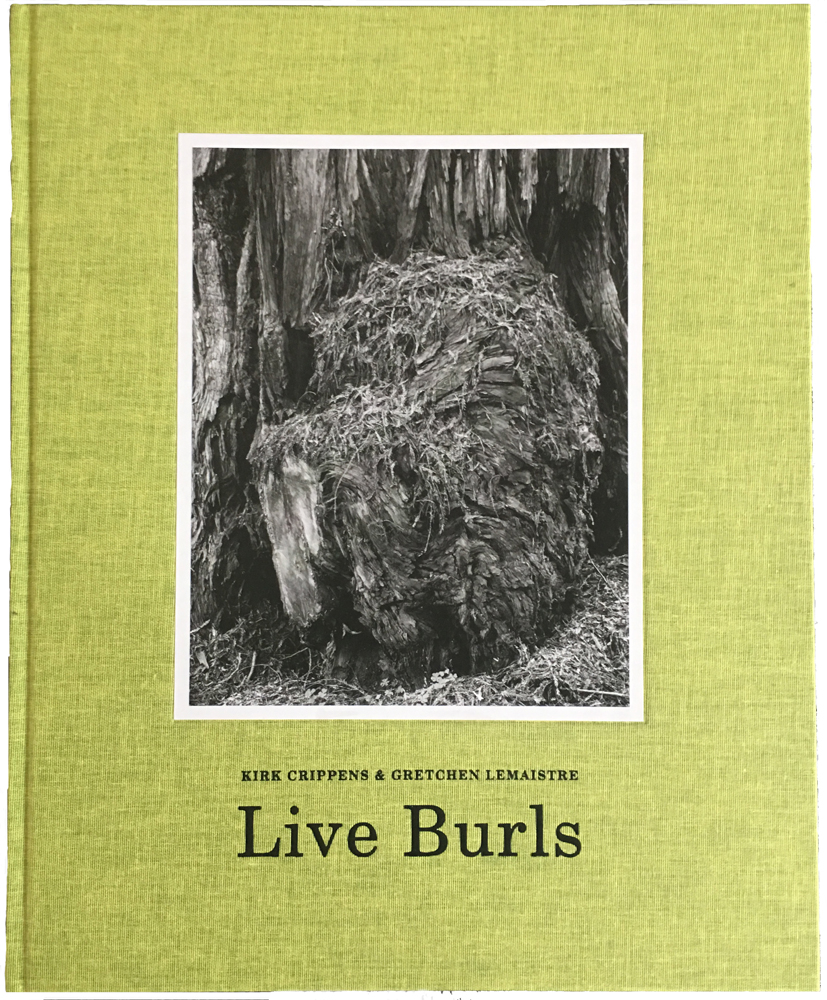 As we trudged through old-growth redwood forests, under the weight of an 8×10 camera, tripod, and film holders, we imagined Carleton Watkins and Eadweard Muybridge, master photographers of the late nineteenth century. We had chosen to maintain continuity with our forebears by making our own photographs in traditional black-and-white format.

The early masters captured the magnificence of these trees during the heyday of western expansion in the 1800s. Carleton Watkins’ pristine photographs became instrumental in preservation efforts to secure land for our National Park Service. Other photographers of the same era showcase proud lumberjacks next to their felled trophies. Their photos embody the fever of conquered dominion and are characterized by a circus attraction for the trees’ mammoth proportions. Despite their contradictory intent, all these images seeded photographic history and perceptions of nature in America.

Redwood trees bear the species name sempervirens, or “ever living.” Some redwoods in the Northern Hemisphere have been alive since the days of the Roman Empire, more than 2,500 years ago. The oldest among them are living witnesses to our human history. We celebrate the trees and their forests for their beauty, longevity, and monumental size. They are also known for their accelerated ability to regenerate, a capacity sustained through their knobby protrusions, called “burls.” Growing at the base of the trees and on their trunks, the burls contain stem cells that enable the redwoods to clone and nourish themselves. 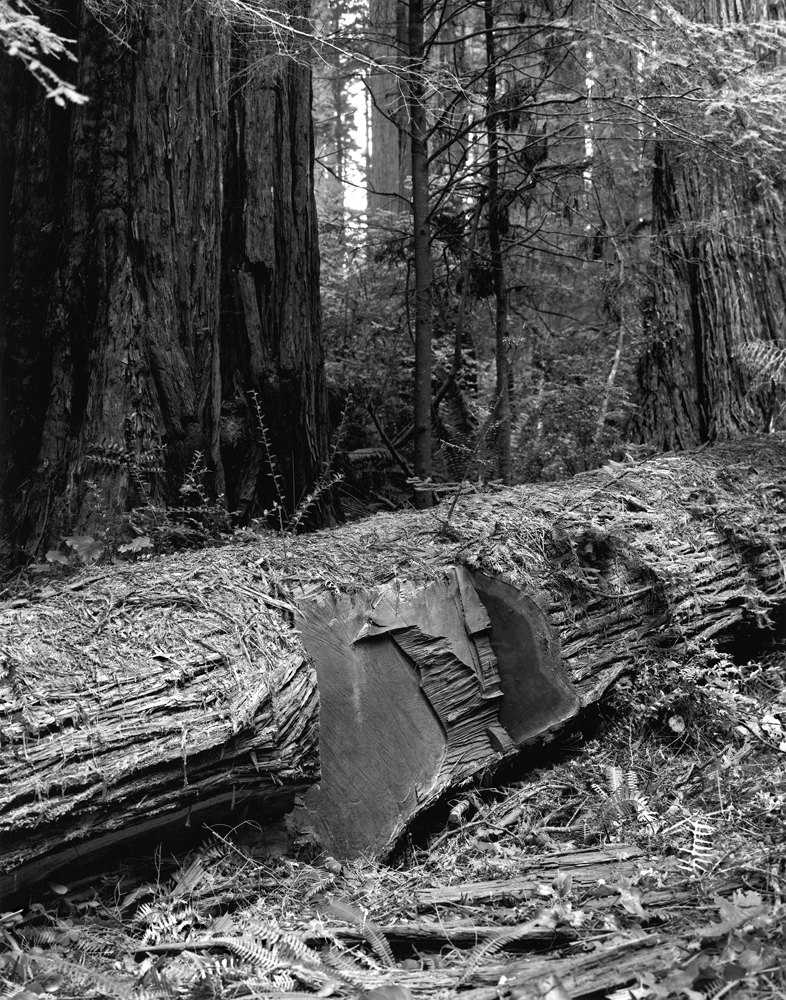 Only a small percentage of redwood seeds become trees; instead, sprouting burls grow the majority of offspring. In a sense, a redwood tree may never truly die, because the burls’ genetic codes maintain cycles of reproduction dating back nearly 200 million years, when the species began.

Today less than five percent of old-growth redwood forest remains in the Northern Hemisphere, most living in the Redwood National and State Parks. Yet even the protected trees of the parks are subject to threat. Burl wood-grain is prized on the black market for its exquisite rarity. Poachers sometimes harvest the burls for consumer profit. In 2013 an alarming number of trees in the Redwood National and State Parks were targeted by poachers with chainsaws. One team of thieves was bold enough to fell an entire tree for its burl. Sadly, they jettisoned the 500-pound burl by the side of the road when it proved too heavy for their vehicle. Brett Silver, a supervising park ranger, compared the act to hacking up a church, echoing Theodore Roosevelt’s words in 1890-that a grove of giant redwoods is like “a great or beautiful cathedral.” Wounded trees are more vulnerable to disease. Their ability to reproduce is endangered and the entire grove ecosystem is compromised. Decades may pass before the full extent of the damage can be assessed. 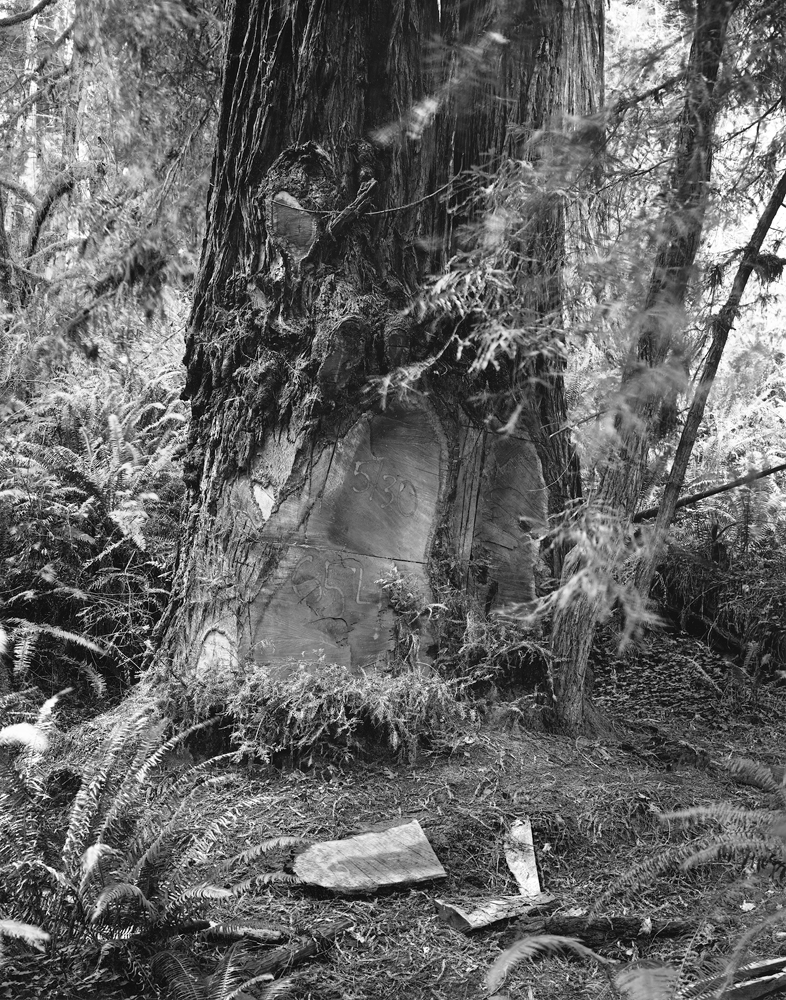 We learned of the poaching incidents through the media. Upset by the targeting of these iconic national treasures, we contacted park rangers, who led us to the shorn trees in the forests. We observed directly the disfigurement of reckless consumerism. We wondered about the fate of the trees as we returned through many seasons to portray them in optimal light.

For us, the connection between photography and the redwoods is charged with historical significance. The scarred redwoods are emblems of both natural glory and entitled consumption. They represent the dual nature of the American dream. In the present day, as in the past, we witness their desecration and endeavor to continue the conversation begun by the early masters. 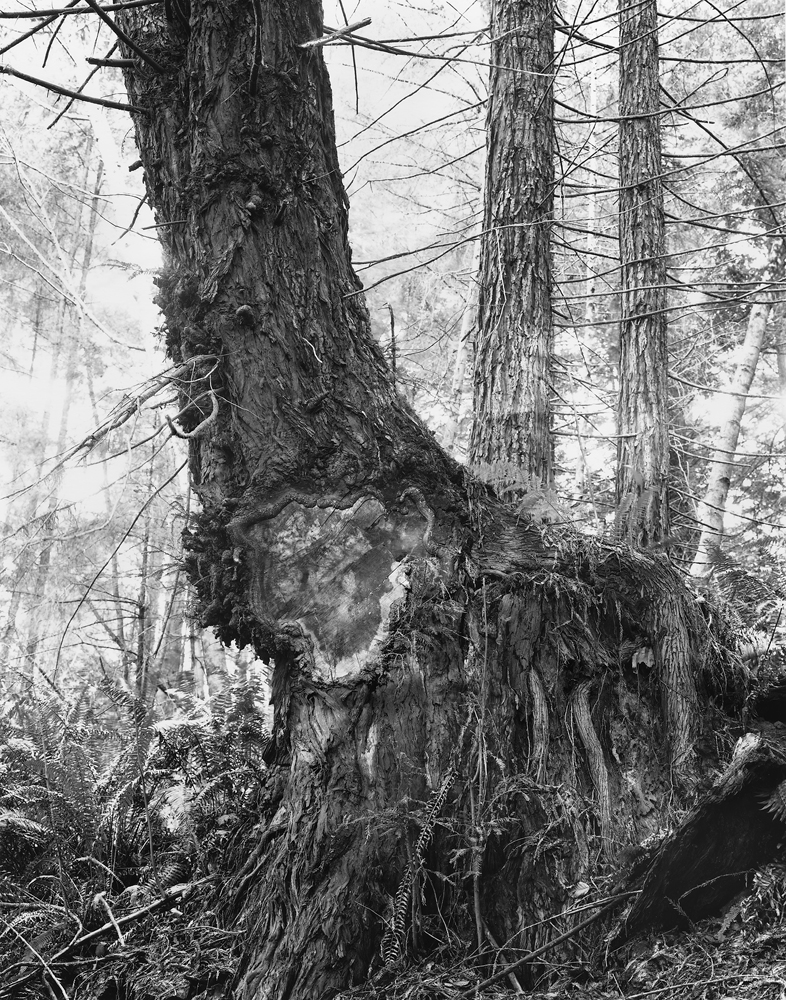 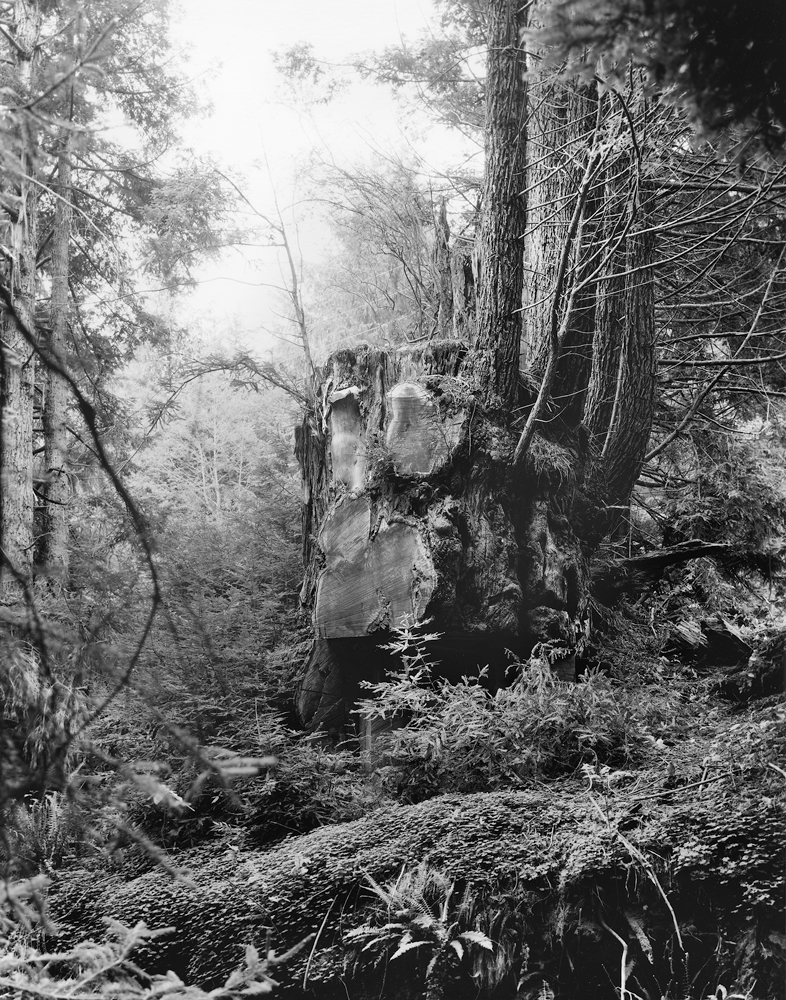 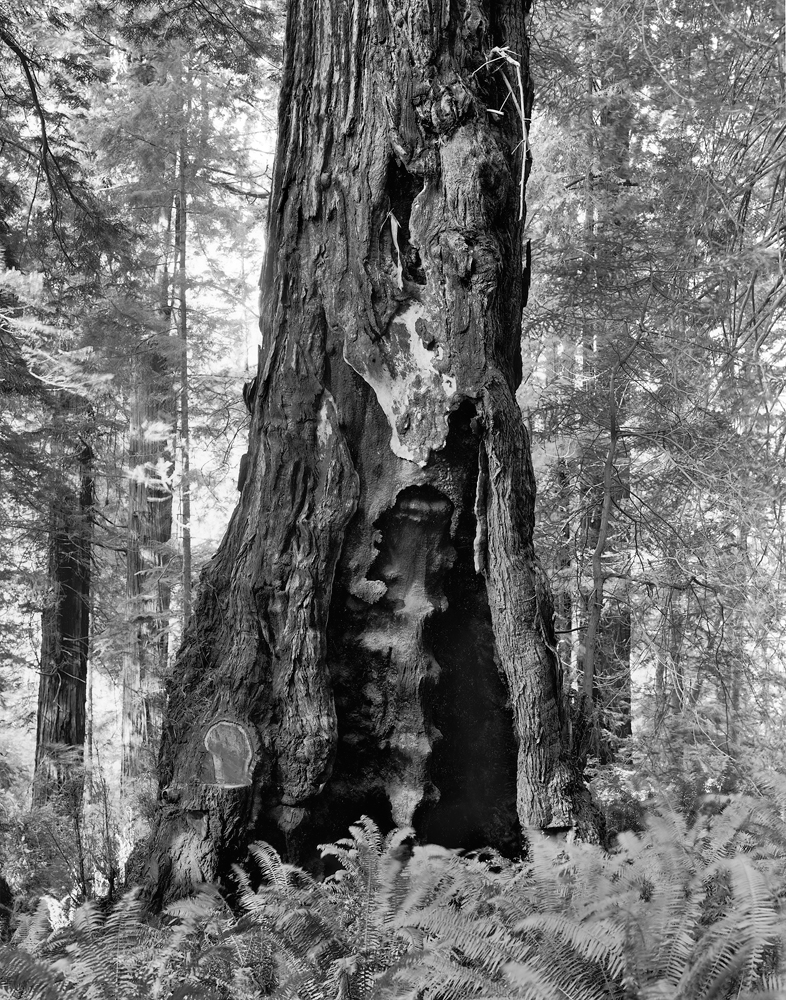 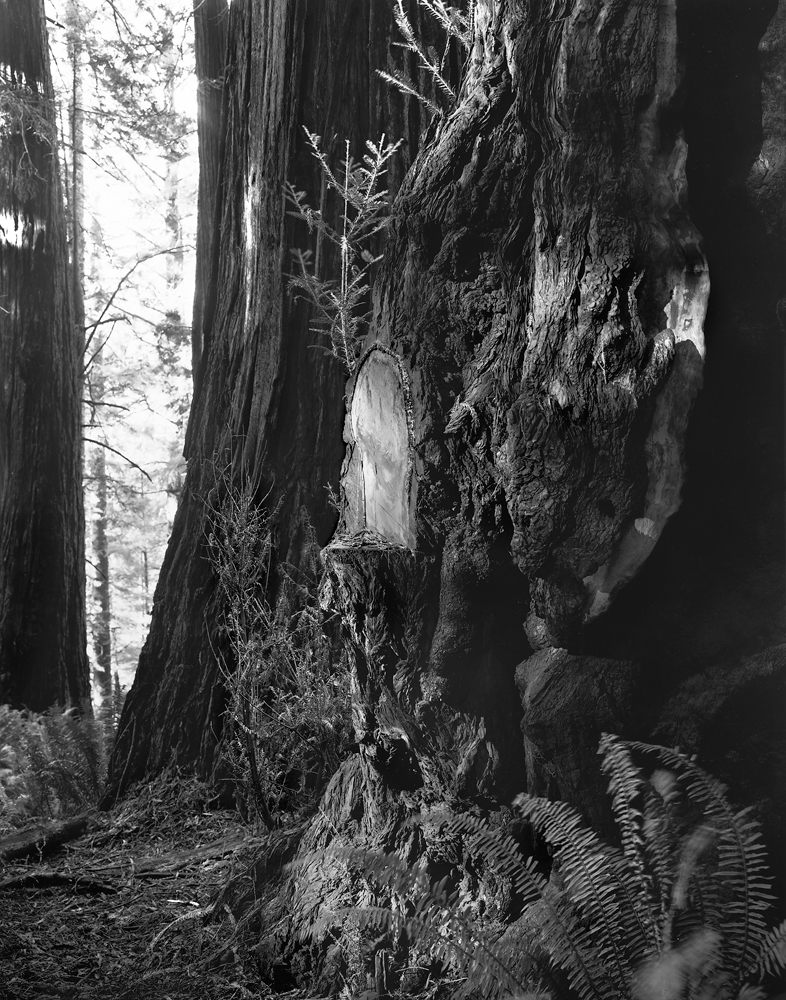 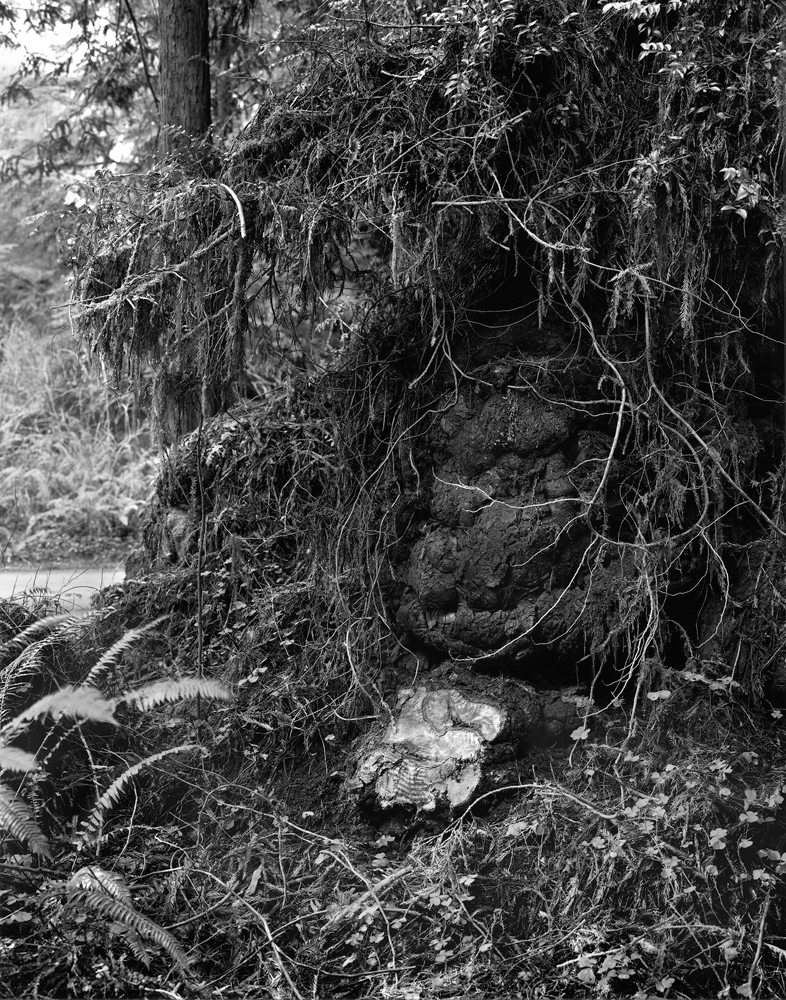 NEXT | The Field Photographs of Alain H. Liogier: with Brandy Watts >
< Content-Aware: A Place Both Wonderful and Strange | PREV