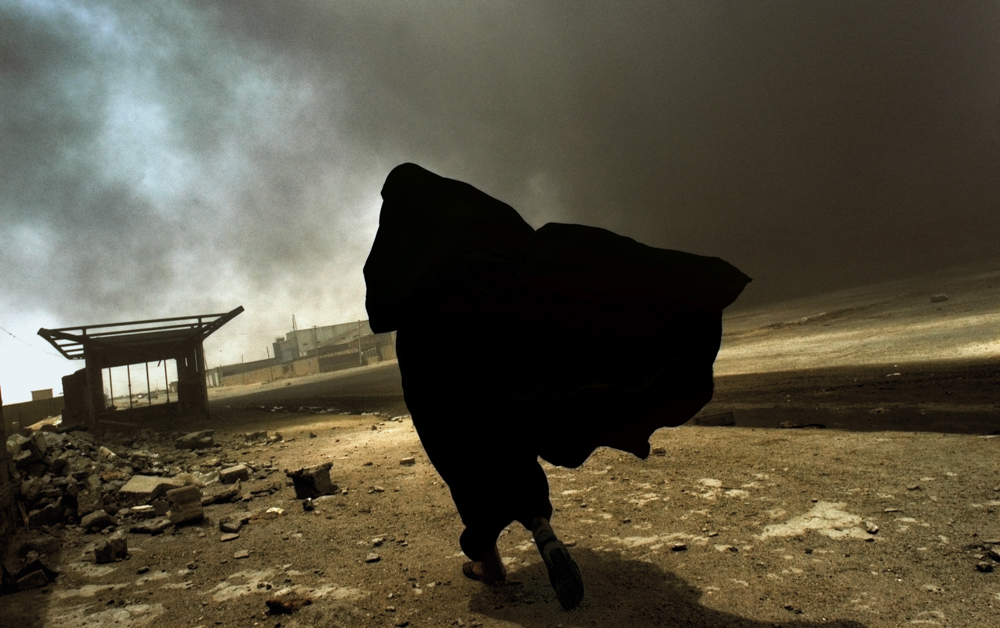 An Iraqi woman walks through a plume of smoke rising from a massive fire at a liquid gas factory as she searches for her husband in Basra, Iraq, May 2003. ©Addario

The School of Visual Arts (SVA) honors Lynsey Addario, acclaimed photographer, MacArthur Genius Grant and Pulitzer Prize recipient, with the 32nd annual Masters Series Award and Exhibition, originally planned for Fall 2020. Curated by Maya Benton and Perri Hofmann, “The Masters Series: Lynsey Addario” will be a comprehensive retrospective of her fearless, two-decade journey documenting humanitarian issues around the globe. The exhibition will be on view through Saturday, October 29, 2022, at the SVA Chelsea Gallery. Admission is free and open to the public. “The Masters Series: Lynsey Addario” is presented with support from Hahnemühle, Nikon and Verbatim Photo.

Lynsey Addario’s work has taken her all over the world in her more than 20-year career beginning in 1996, including the frontlines of conflict in Afghanistan, capturing the harsh realities of American troops and Afghan civilians. She covered life under the Taliban before 9/11, then the fall of the Taliban in 2001 and the fall of Saddam Hussein in Iraq from 2003 to 2004 for The New York Times. She eventually shifted her focus to Africa, documenting major conflicts in the Democratic Republic of Congo, Libya, Somalia, Yemen, Lebanon and South Sudan. Addario spent six years in Darfur and was one of the few able to photograph there in the weeks after International Criminal Court issued an arrest warrant for Sudanese President Omar al Bashir on charges of crimes against humanity and war crimes for his role in the genocide. Since the start of the war in Syria, Addario has documented the lives of Syrian refugees from the Middle East to Europe, with stints in Turkey, Lebanon, Germany and Greece.

In the two years since this exhibition was initially intended, Addario has been prolific in continuing to document the major news events of our time, from the war in Tigray to hospital wards during the pandemic, vaccination efforts in South Sudan, and women on the frontlines of climate change. Most recently, Addario’s photographs of the war being waged on Ukraine and its people have transfixed the world, particularly the heart-wrenching image of Tetiana Perebynis and her two children, who were killed as they tried to flee Irpin, near Ukraine’s capital, Kyiv.

Addario has brought a strong focus to women’s issues in her work, including gender-based violence and rape as a weapon of war—topics covered in a traveling exhibition she did with Columbia College of Chicago in 2008. She also began work on a long-term project on maternal mortality in 2009, documenting complications associated with women dying in childbirth in places including Sierra Leone, India, the Philippines and the United States. 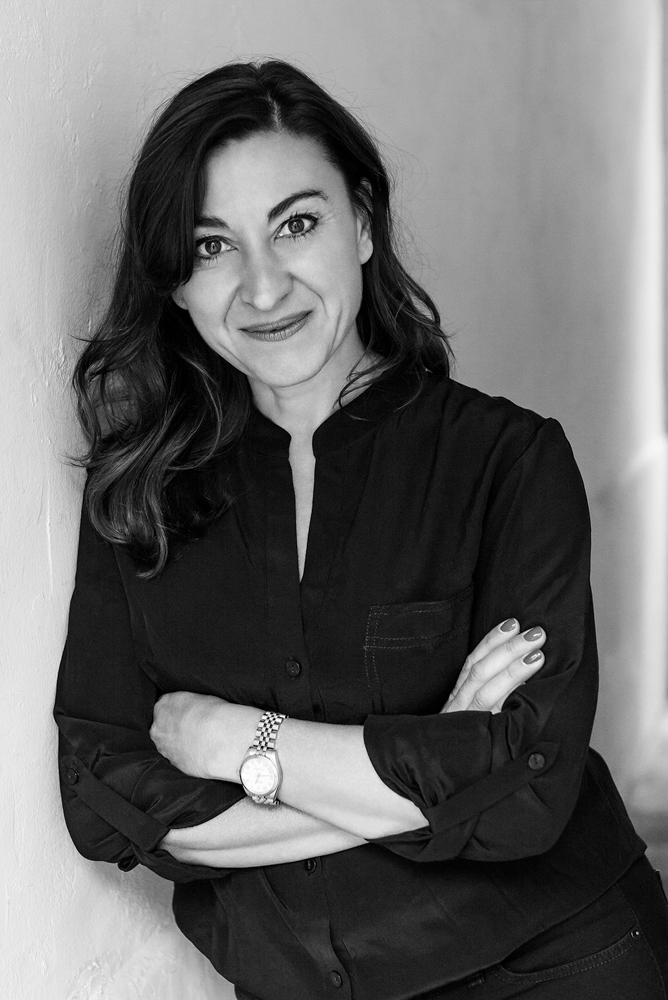 Addario is the author of Of Love and War (2018, Penguin Press), her first solo collection of photography, and the New York Times best-selling memoir It’s What I Do: A Photographer’s Life of Love and War (2015, Penguin Press), which chronicles her personal and professional life as a photojournalist coming of age in the post-9/11 world and many near-death experiences, including two kidnappings and a Taliban ambush while with the 173rd Airborne in the Korengal Valley.

In 2015, American Photo Magazine named her one of the five most influential photographers of the past 25 years, saying she changed the way we saw the world’s conflicts. Her work has also appeared in National Geographic Magazine and Time Magazine. She has received The Overseas Press Club’s Olivier Rebbot Award, National Geographic Society’s Eliza Scidmore Award for Outstanding Storytelling, two Emmy Award nominations and three honorary doctorate degrees from University of Wisconsin-Madison, Bates College and University of York in the United Kingdom.

“It is an incredible honor to be selected for the SVA Masters Series. At a time when truth is being disputed and journalism is under attack, the visibility SVA brings to the content and issues in my photographs helps highlight the importance of photography in fostering a better understanding of the world around us,” says Addario. “I hope the exhibition will give people a greater perspective beyond the borders of the United States. I hope the images are educational and insightful and provide historical context to wars and humanitarian crises of the past two decades.”

In 1988, SVA founder Silas H. Rhodes instituted the Masters Series, an award and exhibition honoring great visual communicators of our time. Although the achievements of many groundbreaking designers, illustrators, art directors and photographers are known to and lauded by their colleagues, their names often go unrecognized by the general public. The Masters Series brings greater exposure to those whose influence has been felt strongly and by many, yet without widespread recognition.

The exhibition will be on view Monday through Saturday from 10:00am to 6:00pm. Public access to the SVA Chelsea Gallery is permitted during gallery hours if visitors show proof of FDA/WHO-authorized vaccinations, including booster, if eligible. Visitors must show photo ID and wear a mask. The gallery is fully accessible by wheelchair. 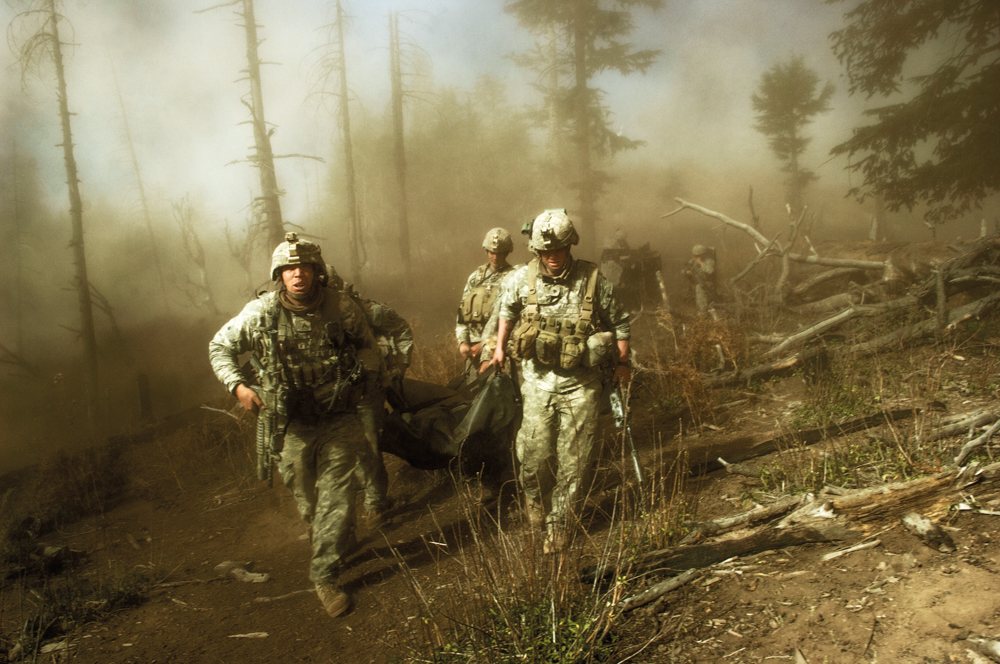 US troops carry the body of Staff Sergeant Larry Rougle, who was killed when Taliban insurgents ambushed their squad in the Korengal Valley, Afghanistan, October 2007. © Addario

I had the pleasure of talking to Lynsey about the award, her work, and what motivates her.

Emily Wall: Congratulations on the award and exhibition! Can you talk a bit about what got you started in photojournalism?

Lynsey Addario: Since I was around 12 or 13 years old, I photographed as a hobby. I have always been interested in other cultures, traveling, and learning about the world, but didn’t realize that photojournalism was the perfect marriage of my love for photography and my passion for learning about people, issues, and storytelling through photographs. 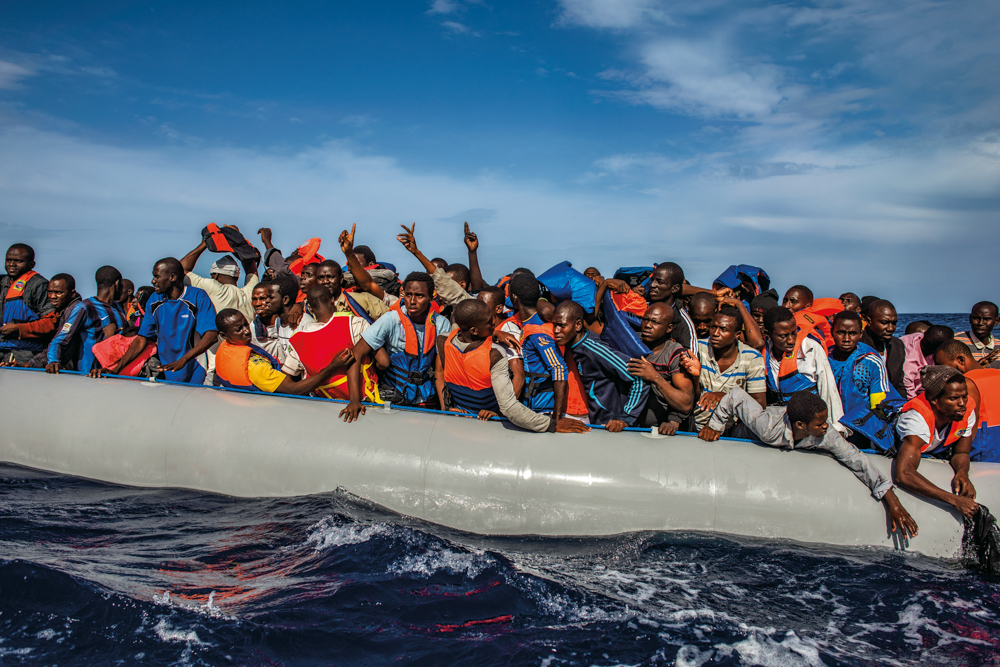 One hundred and nine African refugees from Gambia, Mali, Senegal, Ivory Coast, Guinea, and Nigeria are rescued by the Italian navy from a rubber boat in the sea between Italy and Libya, October 2014. ©Addario

EW: Why are you drawn to such big conflicts of humanity?

LA: It is difficult to say. I guess because I believe it’s important to document the consequences of war, and to hold leaders accountable for the decisions they make that lead to conflicts domestically or abroad. The greatest price is always paid by innocent civilians, and photojournalism provides proof and a historical document of how policy affects people and what is happening on the ground. Journalism is essential for spotlighting global issues. In crisis—whether caused by war or humanitarian disaster—the frivolousness of life is stripped away and only the essentials matter. One witnesses what really matters in life and the true nature of people—what divides and connects us despite geographic and cultural differences. 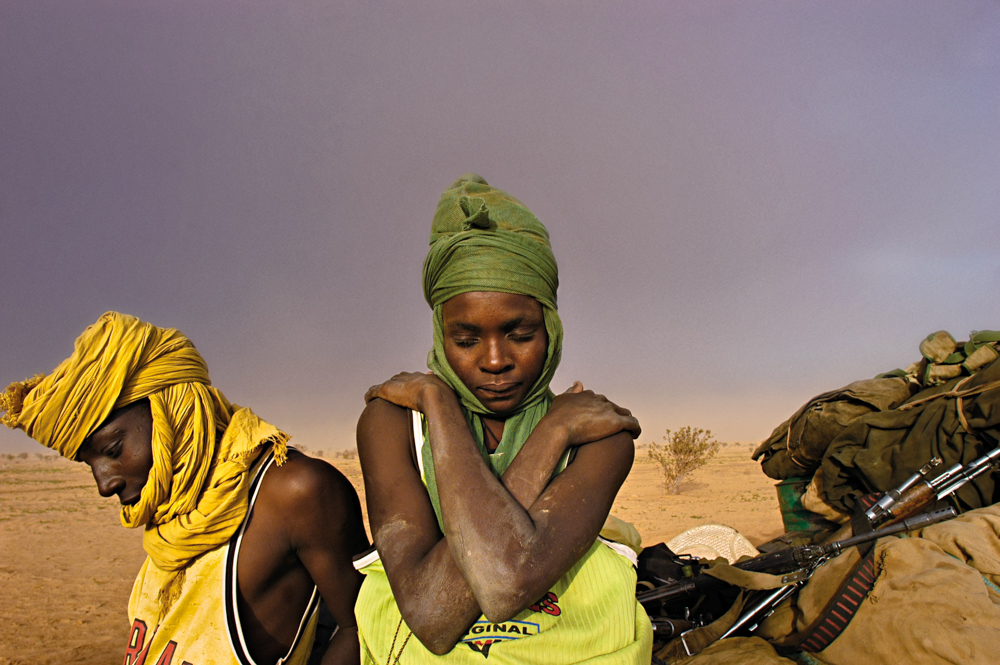 Soldiers with the Sudanese People’s Liberation Army sit by their truck, waiting for it to be repaired, as a sandstorm approaches in Darfur, Sudan, August 2004. ©Addario

EW: I imagine it can be difficult to gain access (geographic and geopolitical) to many of your stories. Could you share an example of this process?

LA: Yes, access is one of the hardest parts of the work I do. Every country, every conflict is very different. On a macro level, to enter a country, move around, move through checkpoints, and just have basic access, I need to secure visas and permits and credentials which identify me as a foreign journalist. On a micro level, I need to find a way to access the people, the population, to hear and record their stories so I can convey them to the world. This is most often done through collaboration with local journalists or photographers, and through time and experience. 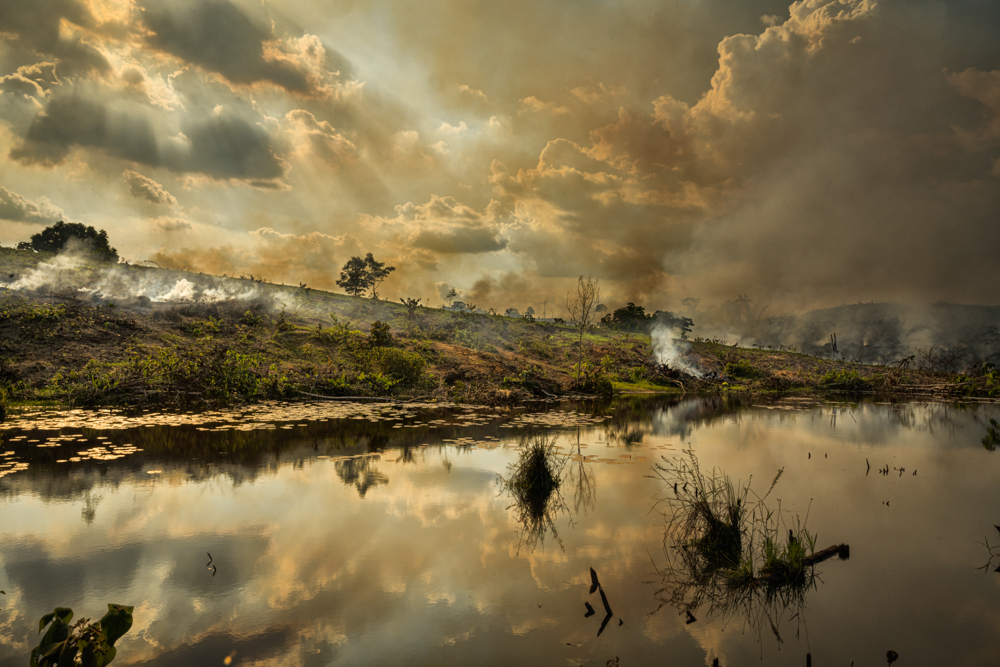 Fires burn along the Trans-Amazonian Highway in Brazil’s Amazonas state, in September 2021. Deforestation continues at extraordinary rates across the Amazon, from meat producers and cattle ranchers who clear the land and illegal mining. ©Addario

EW: Your photographs are so visually striking, how do you achieve the balance between the visual and storytelling components?

LA: I think it’s important to tell a story, but in a way that is compelling enough to draw people in, rather than turn them away. If an image is interesting compositionally, has beautiful light, or evokes emotion, the viewer might ask herself questions about what is going on, about the subject of the photograph—which is the goal. 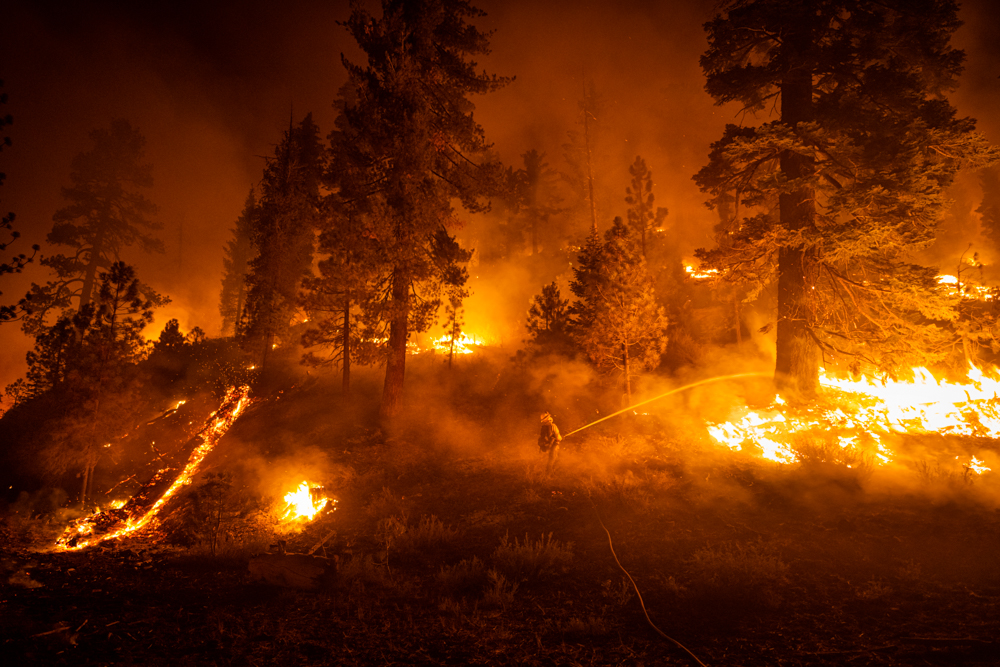 Firefighters with Cal Fire conduct an operation to contain the Dixie fire south of Highway 44 in Lassen National Forest, in California, August 2021. ©Addario

EW: What draws you to stories? How do you pick what to pursue?

LA: Most of the stories I cover for the simple historical importance, and for reasons of justice and human rights issues. And, of course, all the reasons I have described above—that the public needs to be informed, that leaders need to be held accountable, and that images and these testimonies can force policy makers to act. 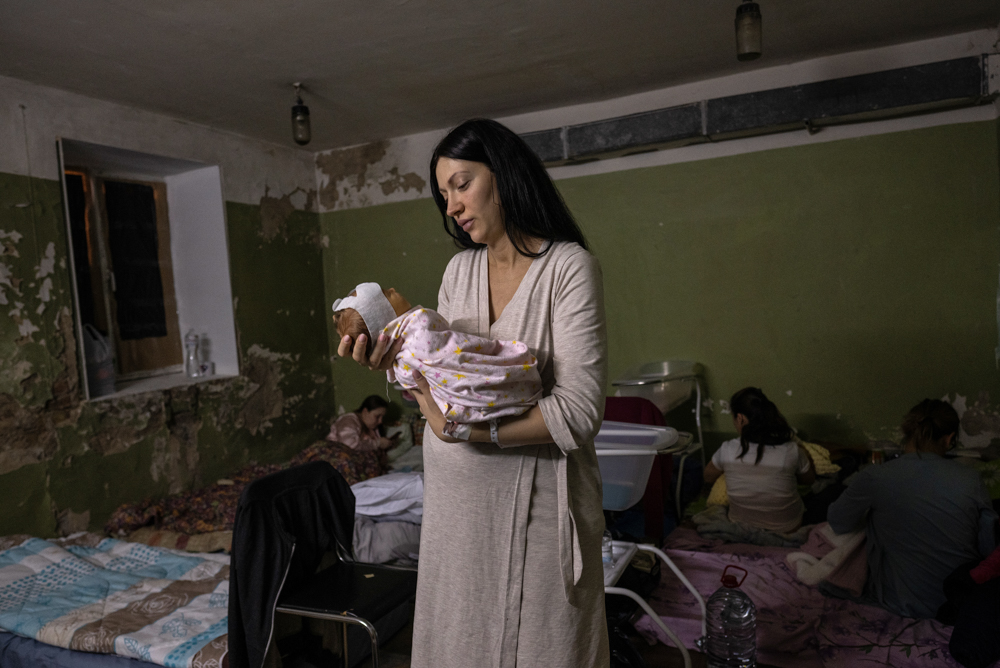 A Ukrainian mother tends to her newborn in a basement maternity ward as Russian forces fight Ukrainian forces on the outskirts of Kyiv, Ukraine, March 2022. ©Addario

EW: How do you achieve such vulnerability and intimacy with the people you photograph?

LA: I guess the very simple answer is that I care deeply. I care about the people I photograph and often put myself in their shoes when I listen to their stories. I spend time listening to them before I shoot if the story is a feature, or if I am shooting portraits. 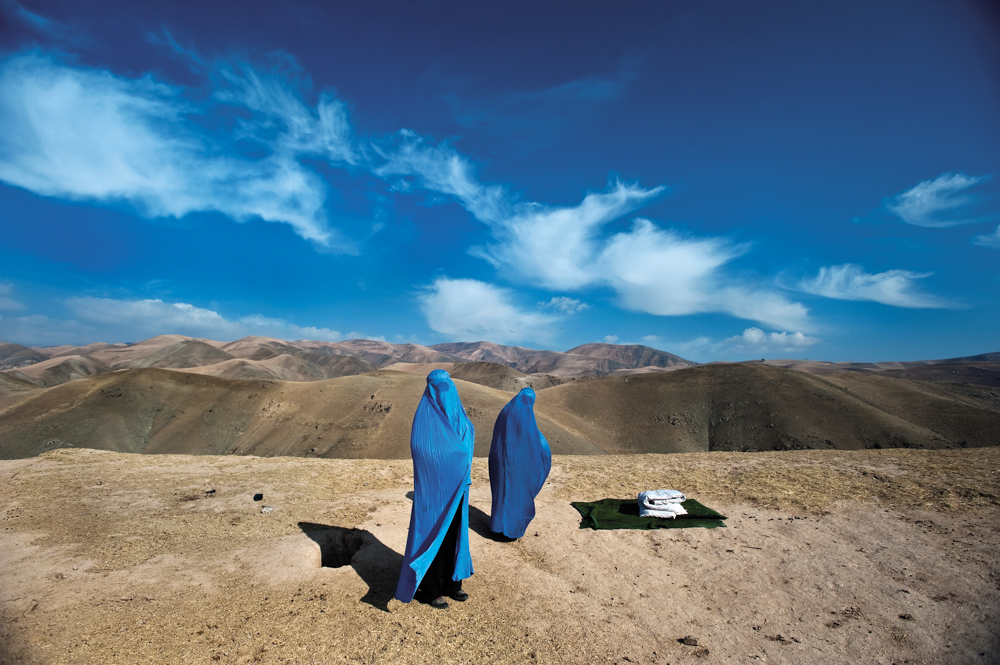 Noor Nisa, 18 (right), in labor and stranded with her mother in Badakhshan Province, Afghanistan, November 2009. ©Addario

EW: I understand you’re in Ukraine right now, what’s next?

LA: I left Ukraine and just opened this exhibition, which was one of the toughest things outside of covering war I have taken on since publishing my two books, It’s What I Do, and Of Love & War. I will likely go back to Ukraine again and am looking at a few other potential stories for National Geographic. 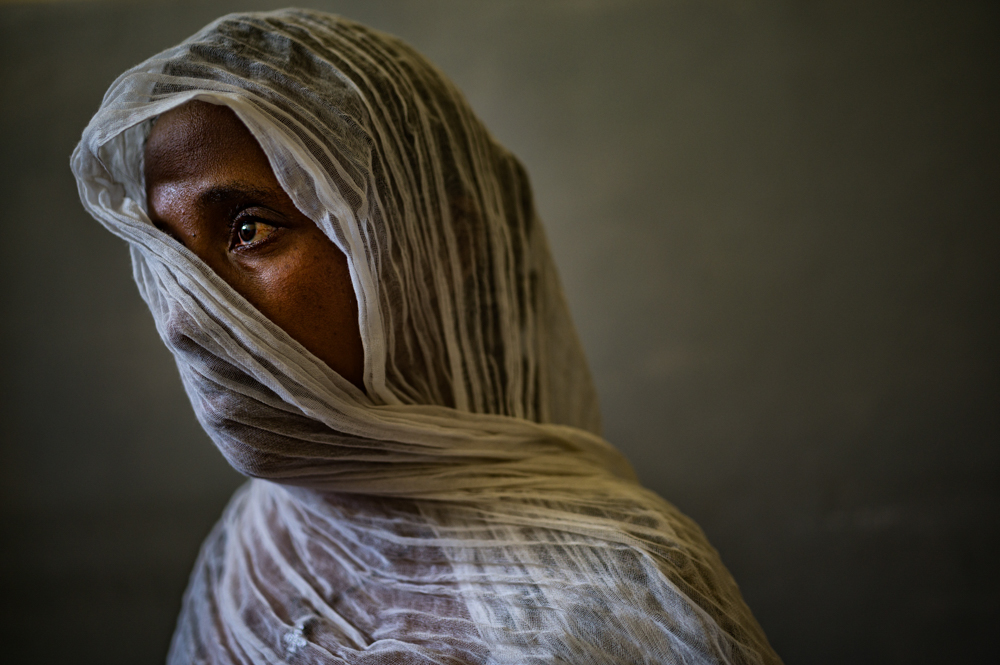 Eyerus, 40, poses for a portrait in a safe space for victims of sexual assault in the Ayder Hospital in Mekele, Tigray, Ethiopia, May 2021. ©Addario 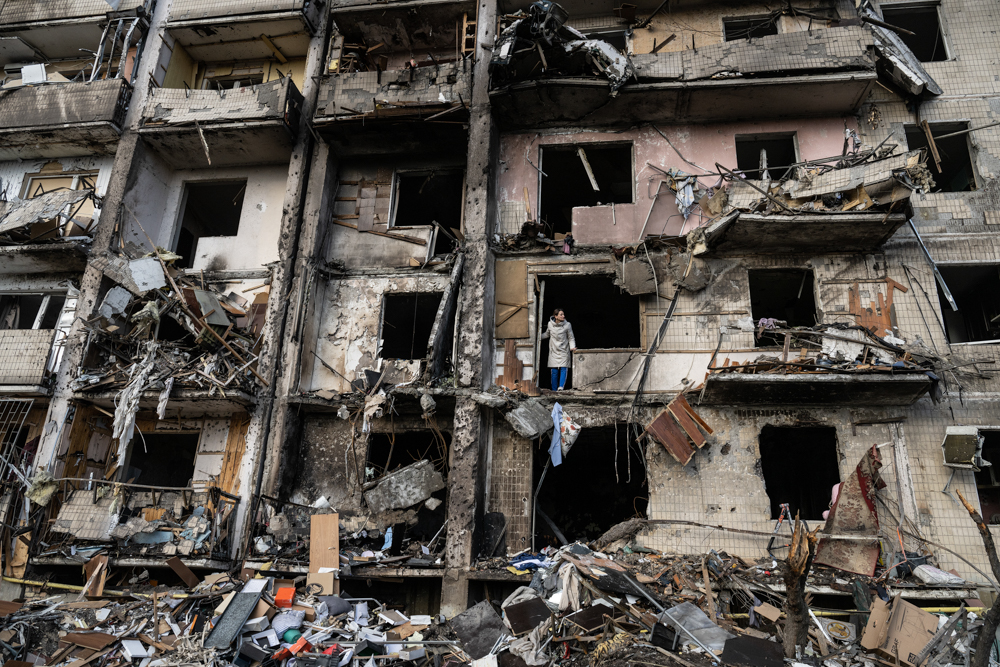 Ukrainians clean up debris after a residential building was hit by Russian missiles in south Kyiv, Ukraine, February 2022. ©Addario