Stephen Strom has a retrospective exhibition at the Verve Gallery in Santa Fe, closing January 19th, but he is is not slowing down by any means.  Stephen has a new book, Sand Mirrors that is “a marriage of poetry by Zen teacher Richard Clarke and photographs by Stephen Strom.”

Stephen spent his professional career as an astronomer and began photographing in 1978.  His work, largely interpretations of landscapes, has been exhibited widely throughout the United States and is held in several permanent collections. His photography complements poems and essays in three books published by the University of Arizona Press: Secrets from the Center of the World, a collaboration with Muscogee poet Joy Harjo; Sonoita Plain: Views of a Southwestern Grassland, a collaboration with ecologists Jane and Carl Bock; Tseyi (Deep in the Rock): Reflections on Canyon de Chelly co-authored with Navajo poet Laura Tohe; as well in : Otero Mesa: America’s Wildest Grassland, with Gregory McNamee and Stephen Capra, University of New Mexico Press (2008). A monograph comprising 43 images, Earth Forms, was published in 2009 by Dewi Lewis Publishing.

Sand Mirrors
The images in Sand Mirrors — which might be called metaphorical photographs — were taken on a variety of beaches located along the Northern California and Oregon coasts during 2007-2011.These beaches are notable for their relative isolation, expanse, stark uplifted and eroded rocks. backdrop of richly foliated coastal cliffs, and variety of sands (basalts; silicates).
This compelling landscape was born in a cataclysmic collision of continental plates and vigorous vulcanism, and shaped over millennia by continuing tectonic activity, and the erosive power of the Pacific Ocean. Fresh water streams flow through many of these beaches, carrying silt and minerals seaward from the nearby coastal range. It is the merging of ocean sands and finely ground minerals at the interface of fresh water and ocean tides that creates patterns that are at once transient, yet somehow timeless as well.
By recording these patterns, Stephen Strom aspires to achieve the nearly possible: evoking the seen and unseen rhythms of an ever-changing landscape, reshaped by wind, tide, and the pulse of the earth itself.
The images invite viewers to “quiet wonder at these few inches of sand that proclaim perfection’ and to remind them in the words of Lao Tzu “to the mind that is still, the whole universe surrenders.” 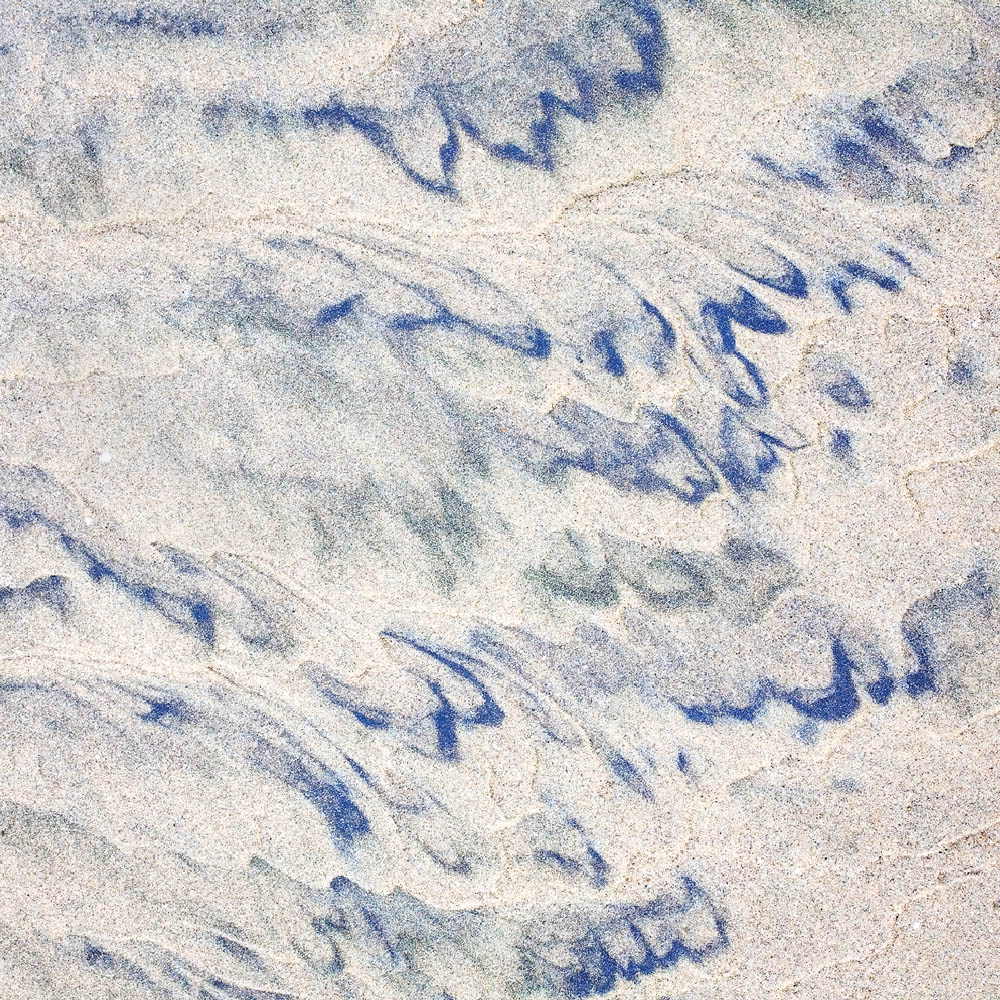 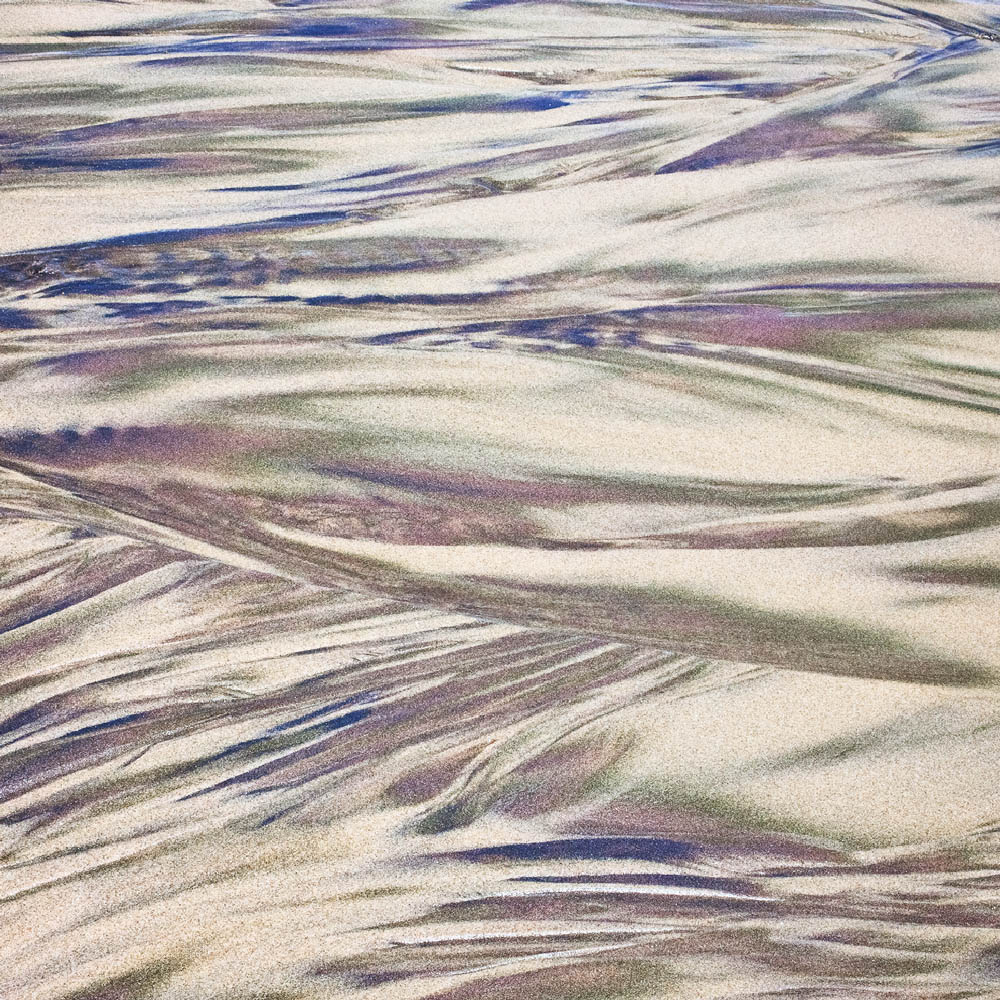 so neatly pieced together
with bold dynamism
as we would like our life to be —
smooth, impervious and impeccable
a joy to behold and to show to others
but what really is
this fabric, this tissue of self?
could it be that it is
as mutable and ungraspable and transient
as water and sand? 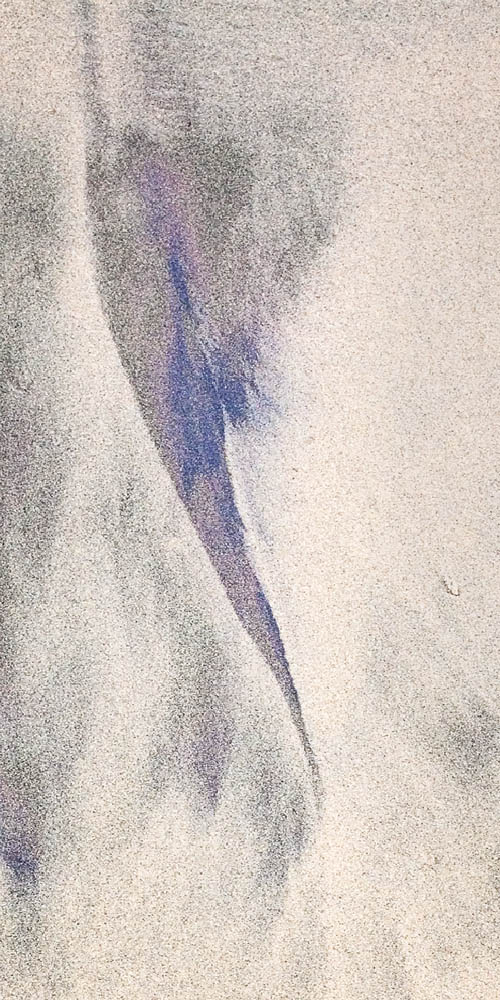 we keep seeking out and coming back
with faith — the proof of things unseen,
that certainty which, though yet unknown,
draws us on;
the sandy surface an analog of simple silence
which all those who directly know the Path
cultivate
as the place of opening —
so here it seems a tear in that surface,
yet what is revealed beneath
is of one substance with that which seems torn:
tantalizingly blue feathery hints
that all our seeking may only hide from us
what only silencing will give some chance
at revelation
that
knowing is intimacy 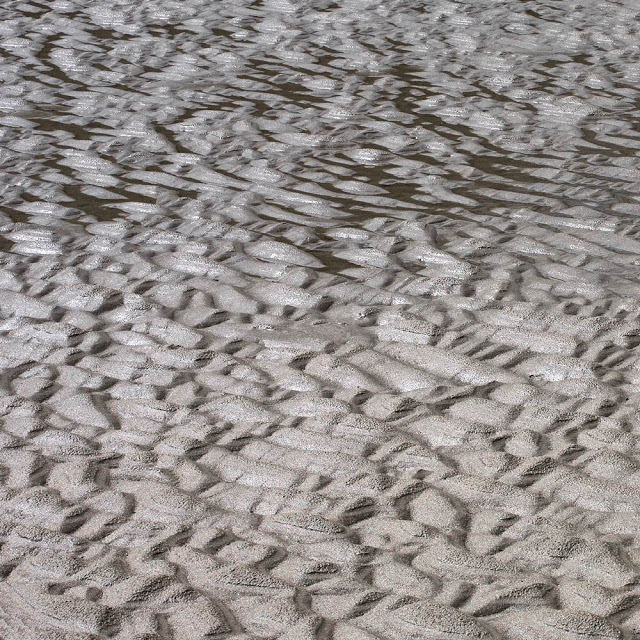 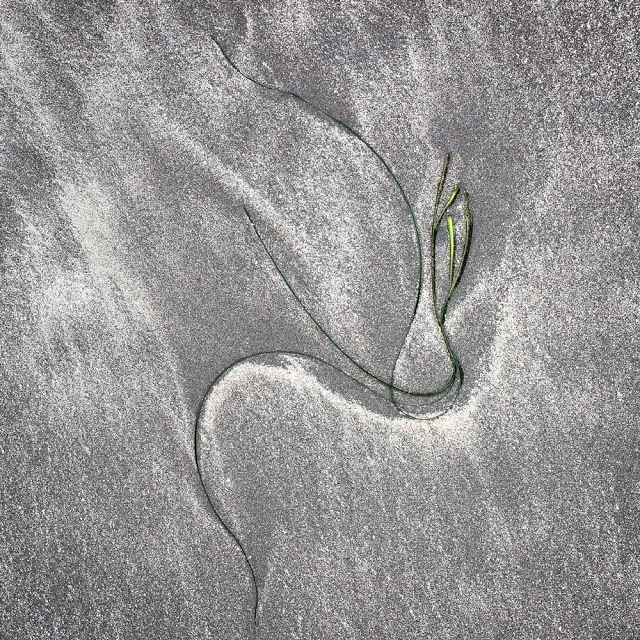 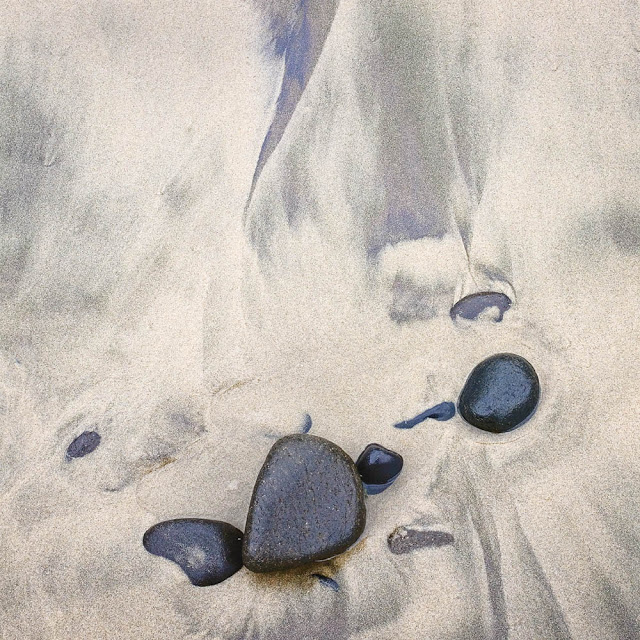 sea-crafted jewels emerge
from sand’s soft silky fabric
with no one and nothing to adorn
intrusions into the stark innocence
of a sufficient world that never asked for them
whose hidden reaches lie modestly above and beyond
unwanted treasures —
begs us to ask what or who confers value on jewels?
or deems them treasure?
and why would naked beauty
wish further adornment? 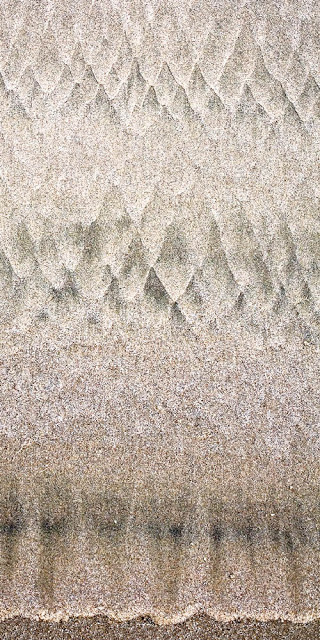 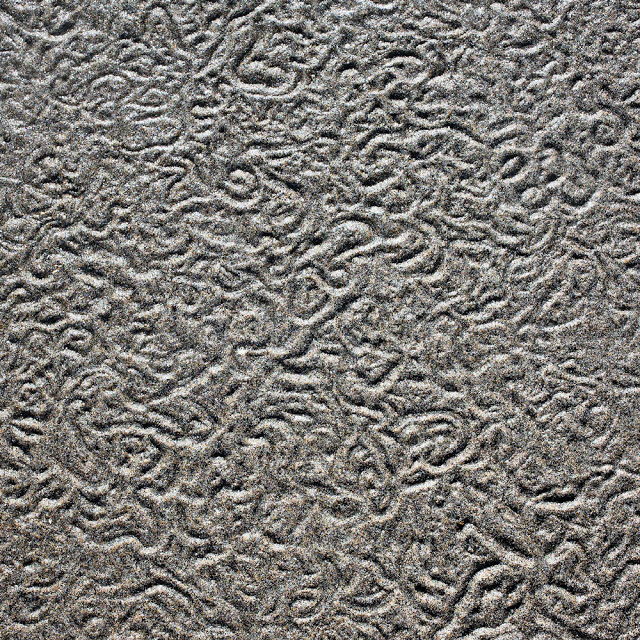 it does seem that we might be viewing the sketchpad
of the designer of many things
or doodles of nothing at all
yet
everything in this world comes from nothing at all
all
derives from this generative exploration
a pencil
on a sketchpad finding forms that appeal
that interact —
what we are as human beings
through all the time we’ve ever known.
ocean holder of all origins and memories
lays a record down in sand
transient between today and tomorrow
ideas buildings empires of cities
and rooftops streets and alleys
just this
where or what
or sand-thoughts knowing not
what the next wave might bring 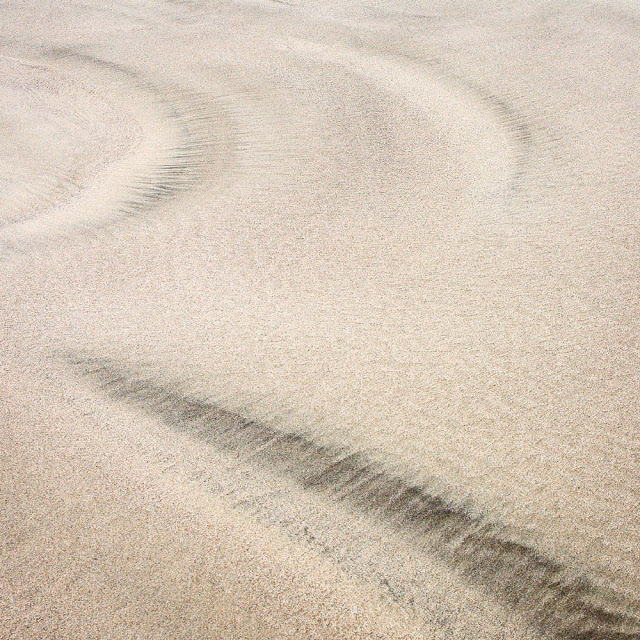 an abstract artistor the imagined god create
from Emptiness, the pregnant void
leave their creations for a brief time in these compliant sands
until the next cycle —
strong yet gentle perfect curves
decisive strokes
declaring what mere words can never say —
their magnetism holds us
to look and maybe see
what silence and the sounds of sand and sea
announce ceaselessly —
if we but come with patience
matching in our timeless being
their unhindered Source 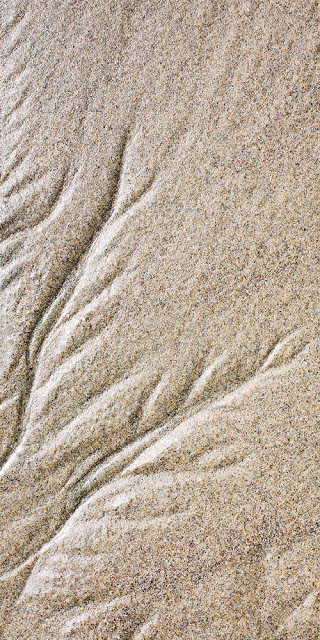