In October, I was met with the great opportunity to work with Aline and LENSCRATCH. Currently, I am a senior photography student at the Milwaukee Institute of Art & Design. Working with LENSCRATCH gives me the opportunity to explore the work of great artists and converse with many people outside the environs of where I live. It is a very exciting time, and in May I will be graduating and beginning the search for employment and inspiration to keep my artistic practices afloat.

Being born and raised in the great state of Wisconsin myself, I wanted to conduct an interview with an artist whose work exemplifies the state and the culture surrounding it. That artist is Mark Brautigam. His work captures the essence of life in the upper Midwest through the perspective of one of its inhabitants. Whether it is through elegant landscapes or insightful portraiture. His images are both quiet and reflective while being slightly humorous at times. 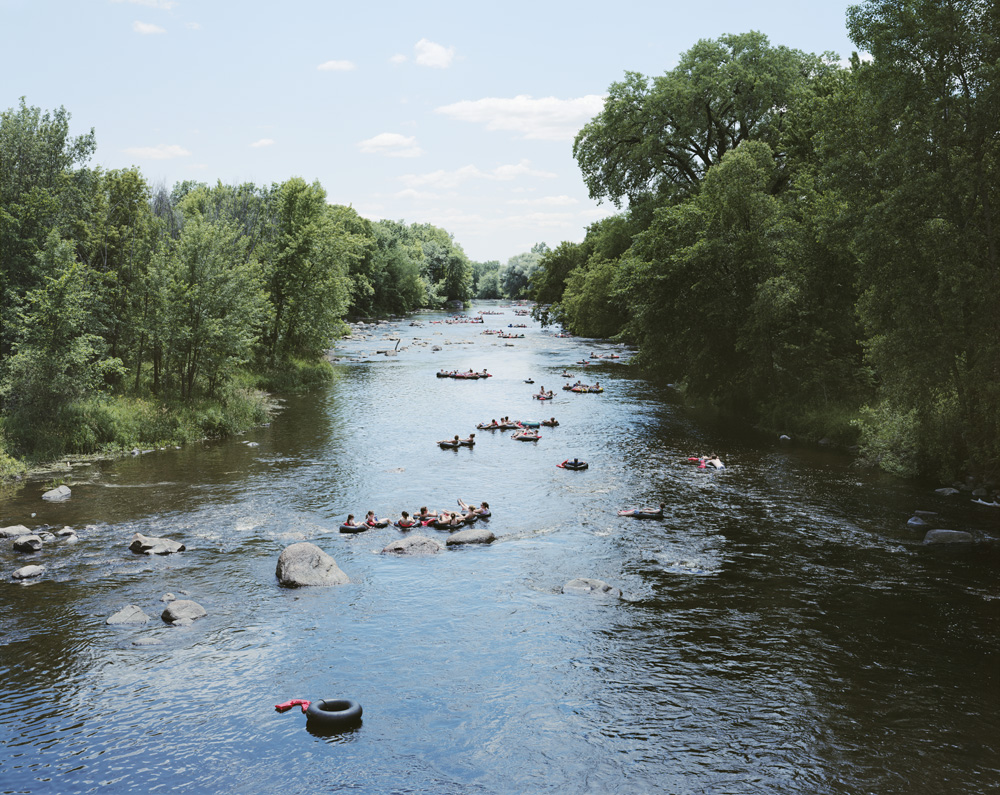 from On Wisconsin
Mark was born in Wisconsin and now resides in Milwaukee. He attended the Milwaukee Institute of Art & Design and received a BS in Mechanical Engineering from the University of Minnesota. After his college years, he served in the US Marine Corps for four years. “On Wisconsin” is his first completed work and has received a large amount of recognition, especially in the Midwest. His works are featured in museum collections including the Milwaukee Art Museum and the Haggerty Museum of Art in Milwaukee. Mark is represented by The Tory Folliard Gallery in Milwaukee, Wisconsin.
On Wisconsin: Guided by the allure of the unexpected and the revisiting of my personal past, I began to make photographs in my home state of Wisconsin in 2005. Coinciding with increasing political attention on Wisconsin, I traversed the entire state several times over the course of five years. The image of Wisconsin being portrayed on the national stage was quite different than the one I had come to know over a life lived within its borders. 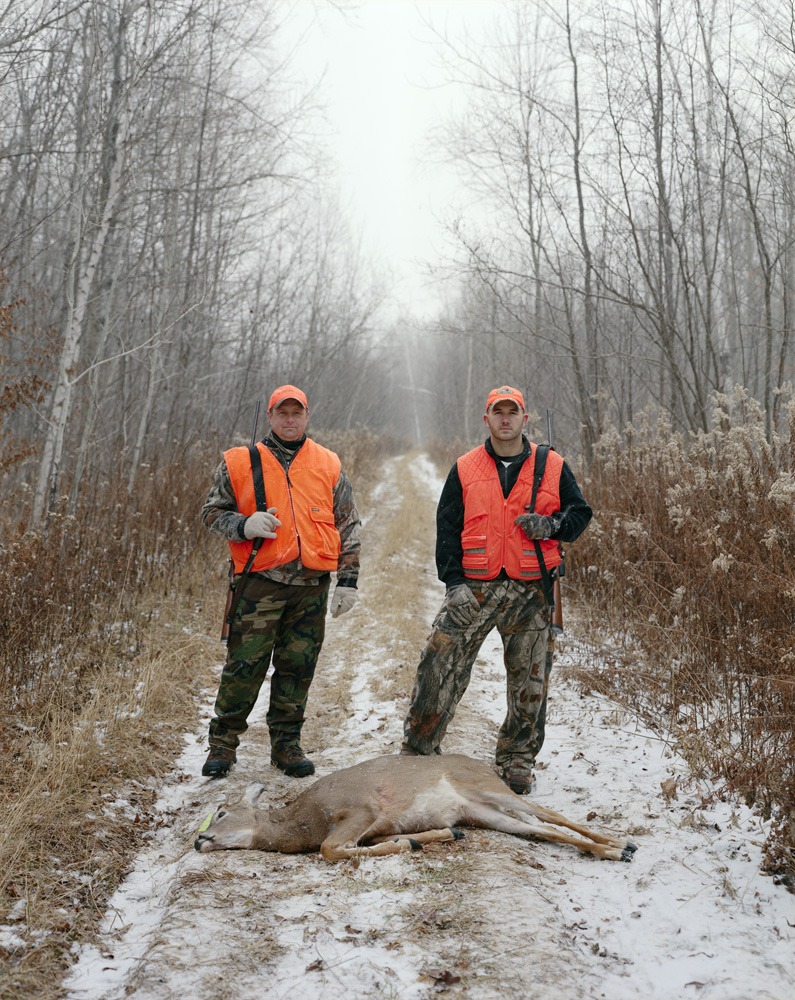 Image from On Wisconsin
These photographs constitute a personal and unique portrayal of the state. They are steeped in unassuming Midwestern solitude, populated by timeless characters, and set in a landscape that is neither dull nor spectacular and always seasonally in flux. While these photographs may live within the stereotypes of the Midwest, they also confound them with a reverent and dignified perspective on the land and people of Wisconsin.
Absorbing wit, humor, melancholy, and irony, the photographs in On Wisconsin seek surprise in the familiar and familiarity in the new. The images transcend the mere documentation of place to become paragraphs unto themselves, countering the instantaneous nature of our era and inviting the viewer to pause. 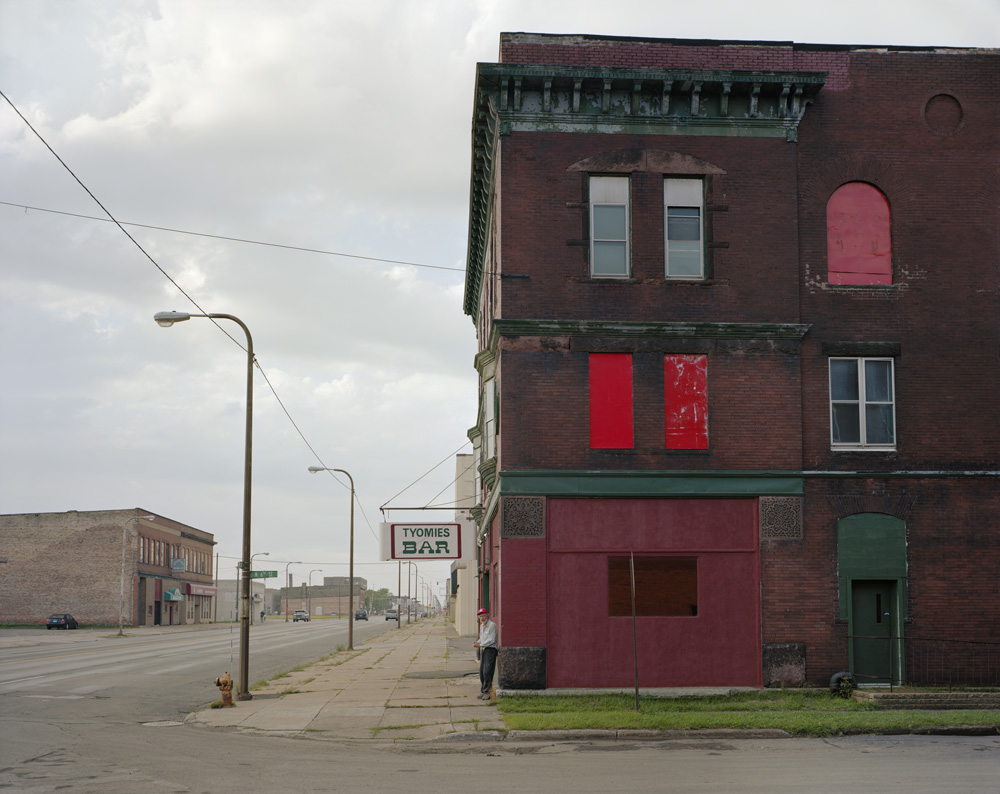 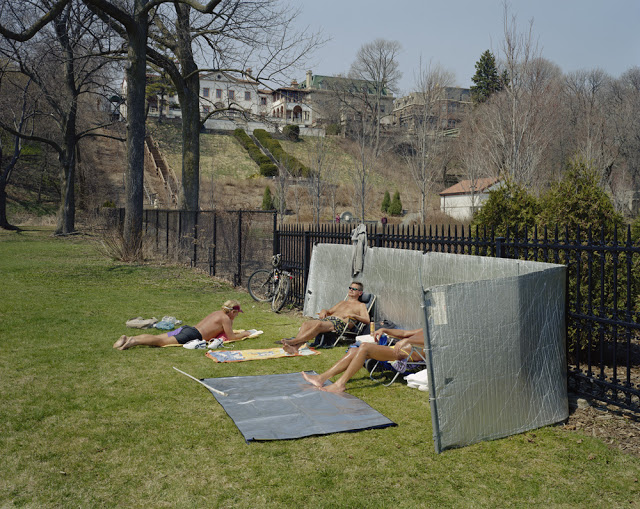 from On Wisconsin
Interview:
Can you explain how you consider the use of natural light vs. staged lighting? How do you think that it affects the images?
I’ve never really considered using artificial lighting in my work. I’m pretty much always going for a natural look and there really isn’t a substitute for the sun. Also, I don’t use assistants. I always shoot by myself. The thought of having to juggle camera, subject, and lights just isn’t all that appealing.
Is being alone while you work an essential aspect to your photographic experience?
Yes, definitely. Besides the fact that I really enjoy the solitary aspect of what I do, it would be too difficult for me to concentrate if I had other people around. Plus, I work pretty slowly and don’t make a lot of photographs in a day. It would be too boring for most people! 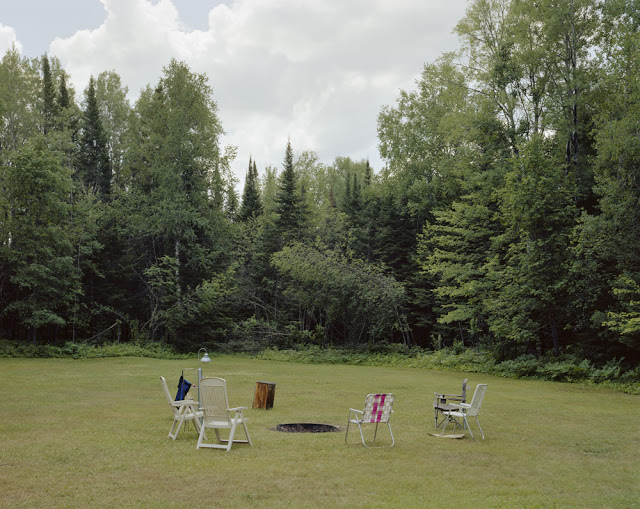 from On Wisconsin
What is your intention behind having many of your images without the presence of people? I find that they are speaking very differently than the physical portraits of people. Are they sort of portraits of the land?
A great benefit to me in doing this project was to get away from the constant contact that we have these days. I enjoy being out in more rural areas and enjoying the solitude. So I think there are many images without people directly in them just by the nature of photographing in places where there were a lot less people than I’m used to. I actually approached the portraits in much the same way that I approached the landscapes. Even though I was photographing a person, I was always just as interested in capturing the environment that person was in. Similarly, when making a landscape photograph I was attracted more to landscapes that bore the mark of some sort of human presence or activity. 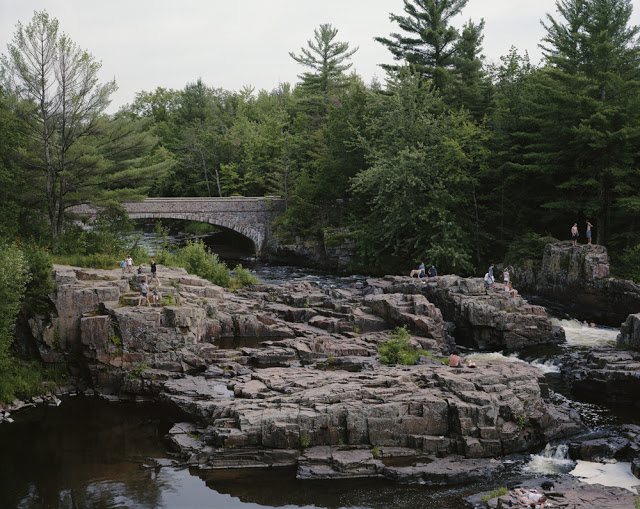 from On Wisconsin
I find that there is a sort of bleakness throughout the work. Can you talk about why you might have chosen to shoot them in this way? Do you find that it accurately captures the “mood” of living in Wisconsin?
I agree that some of the photographs are a bit bleak. There is definitely a stretch in the winter where you feel like you may never see another day above 25 degrees. But I think these photographs are balanced out by a good number of images that capture the anticipation of spring and the exuberance of summer, even that last hurrah of autumn. Massive seasonal swings are part of the experience of living in Wisconsin and I definitely wanted that to be evident in this series. On the aesthetic side, I shoot the vast majority of my photographs in even or diffuse light conditions. I’m not a big fan of harsher lighting situations and that probably contributes quite a bit to the overall somberness of the series.
What sort of thoughts do you want your viewers to take away while viewing your images?
I can’t really say what kinds of thoughts I’m hoping to trigger in the viewer. With each image, I want to give the viewer just enough information to formulate a story, trigger a memory, or evoke a mood. Making these photographs was kind of like hunting. Hunting for little stories that are seemingly insignificant, but become something more compelling once you isolate them. 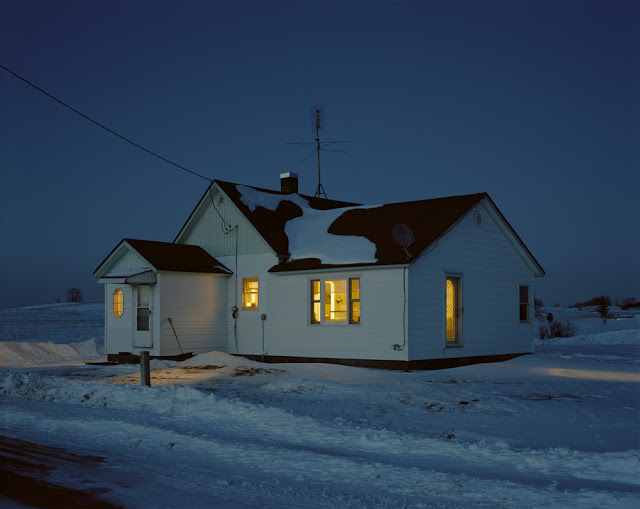 from On Wisconsin
You mention that you could see these images as memory triggers in your viewers. Are your own memories triggered by these images? Do you often “see” the images before you capture them?
My own memories and associations of growing up in Wisconsin were part of the fuel that went into this project for sure, particularly memories of fishing, family vacations, and being in the Northwoods. Those thoughts were always in the back of my mind as I searched for things to photograph, but the desire to see parts of the state that I’d never been to was equally important.
As for ‘seeing’ images before I make them, the only image that matched something I’d imagined would be ‘Aurora’ (the farmhouse against the blue evening sky). In most cases I’d come upon something that was interesting and I’d form a mental picture of what I hoped it would be. Or I’d try to imagine it at a different time of day. Or even in a different season. Sometimes it wouldn’t nearly be what I thought it was or the geometry of the composition just wouldn’t work. It would all come down to a myriad of decisions. That’s what photography ultimately boils down to: decisions … 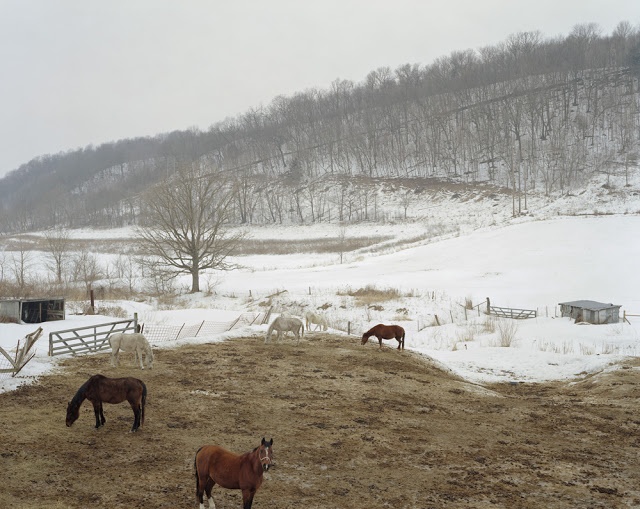 from On Wisconsin
Do you see there ever being an end to On Wisconsin or do you think that it has the potential to continue on into the future?
I made the last photograph for ‘On Wisconsin’ in September of 2010. It just got to the point where I was driving around the state with the feeling that I had seen it all. It all started to blend together. I’d always wondered how I would know when to stop, but there was just this feeling of ‘I can’t go out there again.’ It became more of an obligation. To go back to the project at some point in the future isn’t something that I’d be interested in doing.
Are there new projects you are working on?
After I completed ‘On Wisconsin’ I wanted to take a bit of a break. At first I thought I needed to jump into something new right away. But then I read that when Stephen Shore moved to Montana he didn’t make any photographs for two years. That kind of took a bit of the panic out of me. I’ve recently made some photographs at a foundry and I’m hoping that becomes a new body of work. I find that I work best within some sort of project framework and I do have an idea for my next bigger project, which I’m hoping to start very soon. 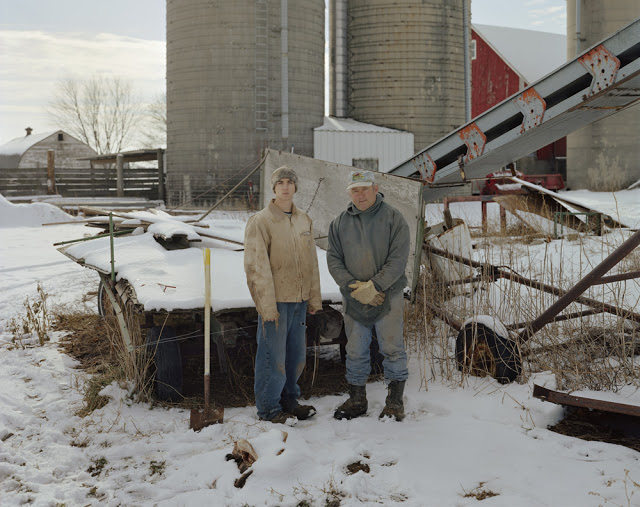 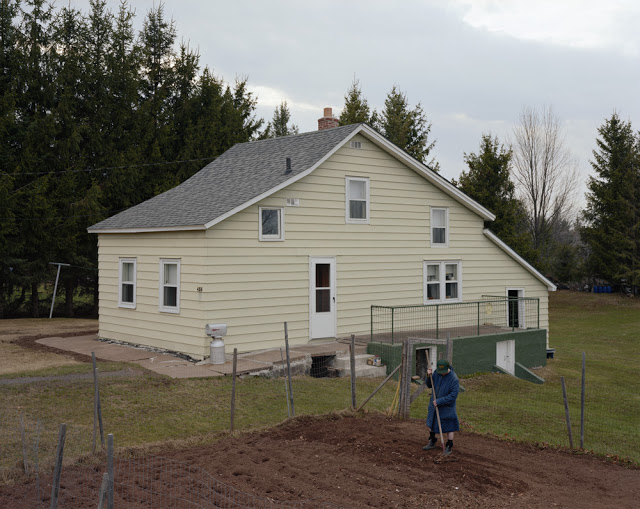