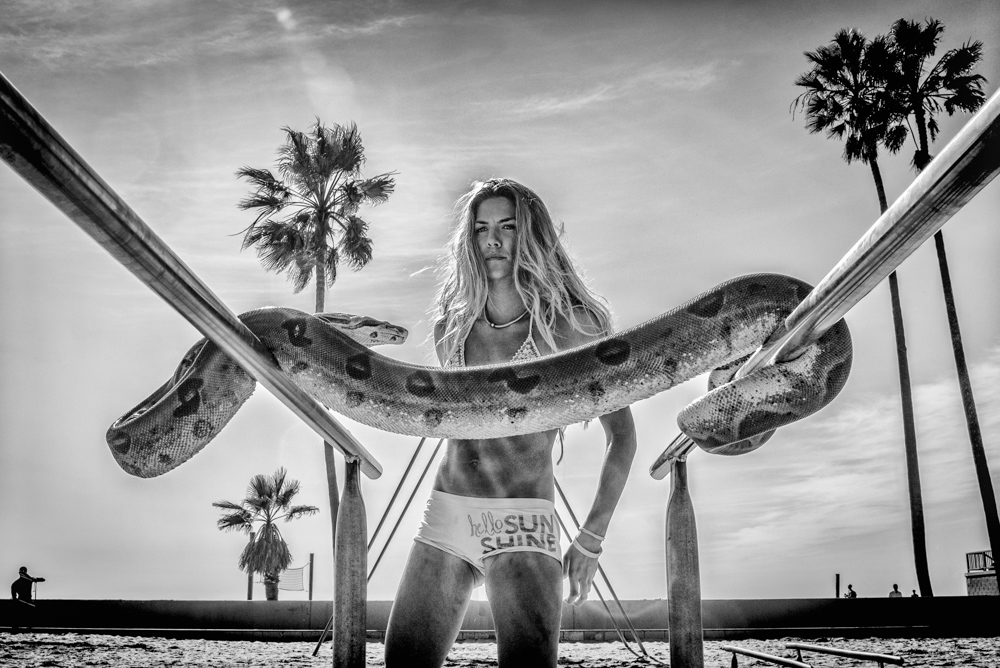 ©Dotan Saguy, from Venice Beach. Jenna watches a giant Boa Constrictor while his owner takes a break. She is careful to keep the snake wrapped around exercise bars to prevent a wound in the animal’s mouth from getting infected.

Los Angeles photographer, Dotan Saguy, has spent hundreds of hours in a part of Los Angeles that was built to echo its Italian namesake, complete with canals and arched walkways, drawing a unique pageantry all its own. Definitely one of the last bastions of free love and unadulterated freedom of expression, Venice Beach draws an amazing cross section of humanity to it’s sand, surf, and blue skies. But with all neighborhoods on the fringe, there is a fragility and dark cloud looming over the area as potheads make way for tech geeks and long time businesses are pushed out in the name of progress, diluting and homogenizing the distinct character of Venice Beach.

Dotan is about to publish a book with Kehrer Verlag and he has created a Kickstarter to raise funds to make the book a reality. Please consider supporting his efforts.

Venice Beach – The Last Days of a Bohemian Rhapsody from Dotan Saguy on Vimeo. 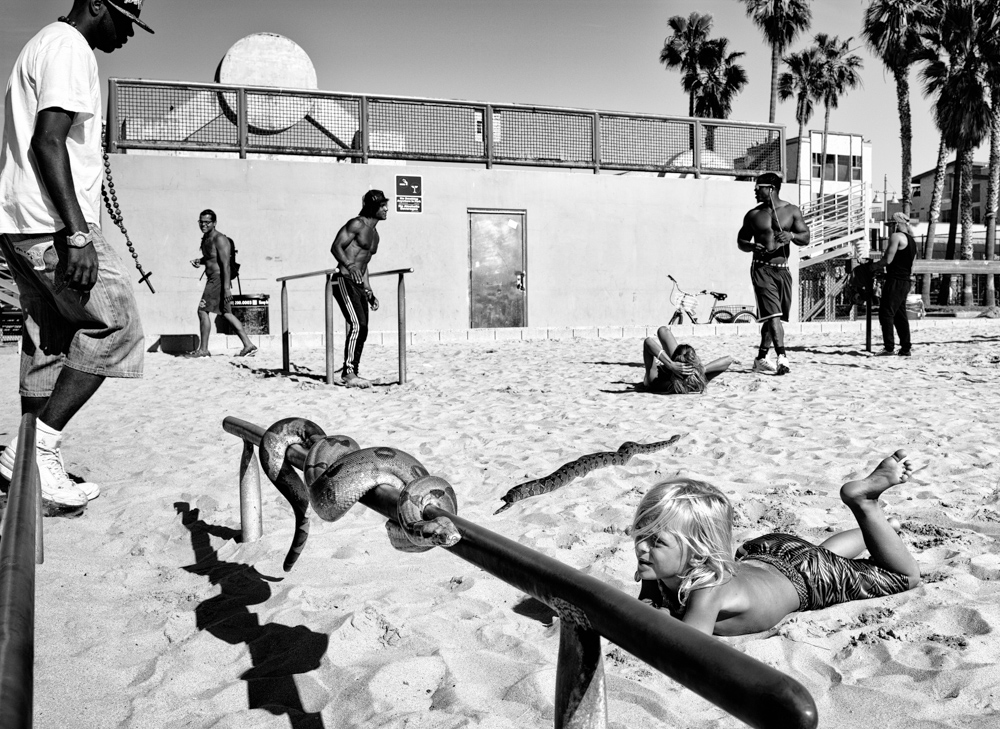 ©Dotan Saguy, from Venice Beach. 5-year-old Jackson watches a Boa Constrictor while another slithers away toward his mom Jenna, laying in the sand nearby. A street performer entrusted the two locals with his large snakes while taking a quick break from the bustle of the Venice Boardwalk.

Dotan Saguy was born in a small kibbutz five miles south of Israel’s Lebanese border. He grew-up in a diverse working class Parisian suburb, lived in Lower Manhattan during 9/11 and moved to Los Angeles in 2003.In 2015 Dotan decided to focus on his lifelong passion for photography after a successful career as a high-tech entrepreneur. Since then he attended the Eddie Adams Workshop, the Missouri Photo Workshop, studied photojournalism at Santa Monica College.

Dotan’s award winning photographs have been published by National Geographic, PDN, Leica Fotografie International, ABC News, etc. Most recently, Dotan is a proud laureate of the Photolucida Critical Mass Top 50 and his first monograph about the endangered culture of Venice Beach, CA will be published in 2018 by Kehrer Verlag.

Dotan is currently working on several ground-breaking long term projects including a photo documentary about the journey of people coming out of homelessness. Dotan lives in West Los Angeles with his wife and two children. 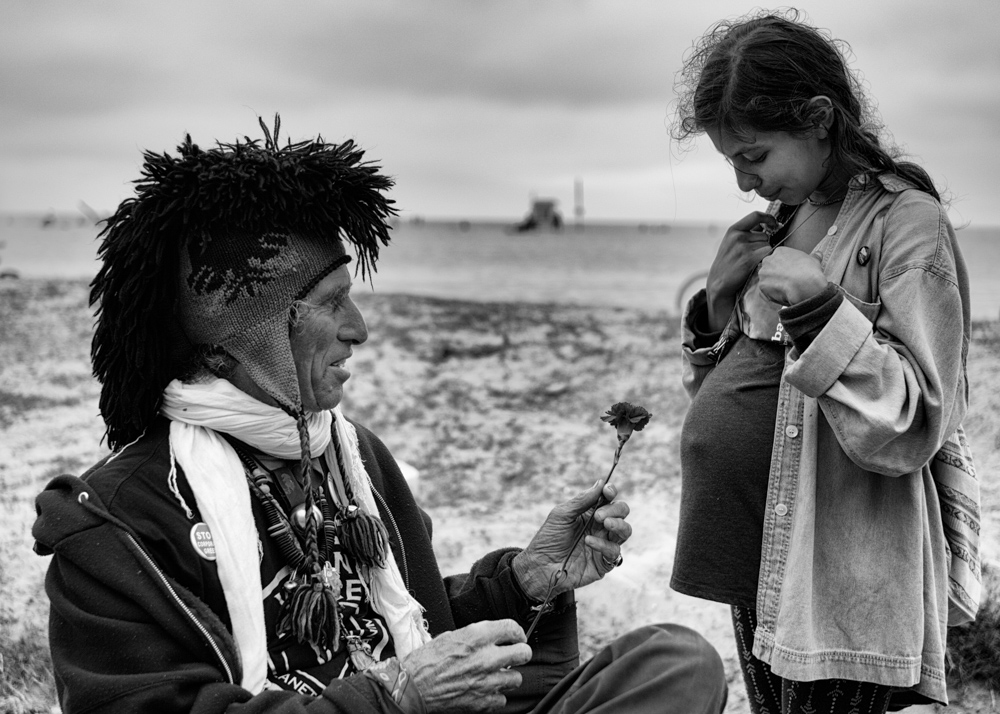 ©Dotan Saguy, from Venice Beach. “Jingles”, a long time vegan and animal rights activist with a stand on the Venice boardwalk, gives a young mother-to-be a paper flower, presumably as some sort of a blessing.

Venice Beach, The Last Days of a Bohemian Paradise

I started my Venice Beach series as a street photography project shortly after deciding to pursue photography as a career. At the time I had already been shooting for over 20 years as a hobbyist and was finally ready to dedicate most of my time to photography. At first I shot street scenes all over Los Angeles and soon realized that I was irresistibly drawn to Venice. Ever since I moved from New York in 2003 I had never connected with Hollywood’s celebrity worship syndrome, the loud Ferraris on Rodeo Drive, the rampant materialism, the hyper-consumerism. Finding Venice was like a breath of fresh air. The Venice boardwalk felt free-spirited, anti-materialistic, inclusive: a value system I could connect with much better. On top of that it was photogenic. It was iconic. It was world famous. 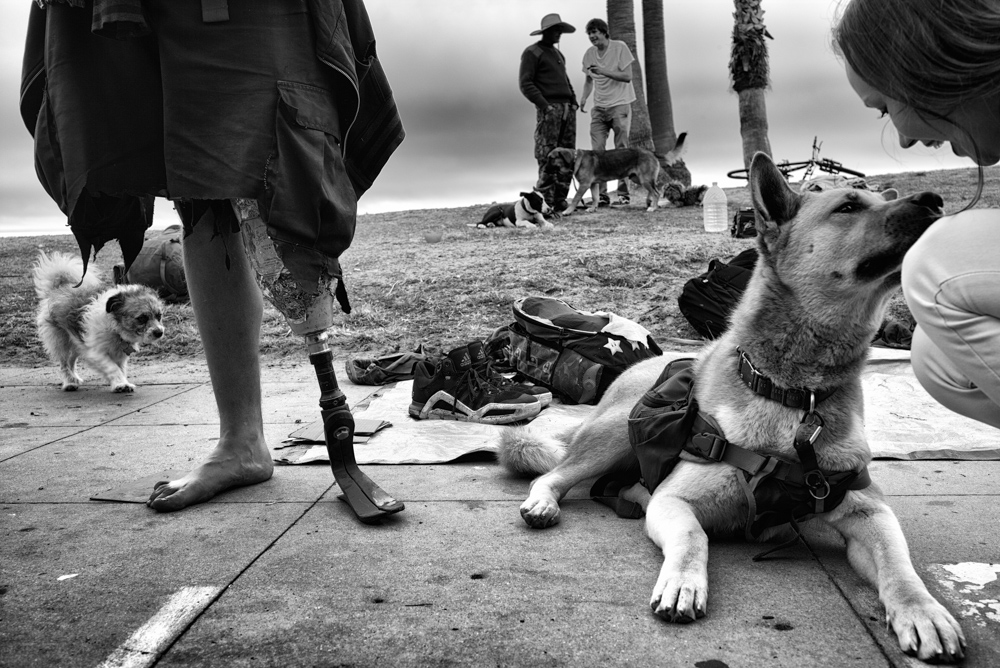 ©Dotan Saguy, from Venice Beach. Hopper, a young man with an artificial leg hangs out on the boardwalk with his friend T, a middle aged hippie as a passer-by pets one of their dogs. Both men live out of a car parked by the dog park for a few days before continuing on south.

The classic street photography approach of shooting without ever engaging with subjects quickly felt too constraining and led to images that were too much “on the surface” to my taste. It was like trying to hug someone from across the street and I wanted to show Venice from the inside. That’s when I realized that only a photojournalistic documentary approach would allow me to achieve that. So at 45 years old I went back to school to take a photojournalism class at Santa Monica College and then was admitted into the two top photojournalism workshops: the Eddie Adams Workshop and the Missouri Photo Workshop. This triple crash course in photojournalism made a world of difference in my work: I started seeing myself as a storyteller and my images started giving viewers a front seat to life on the Venice boardwalk. 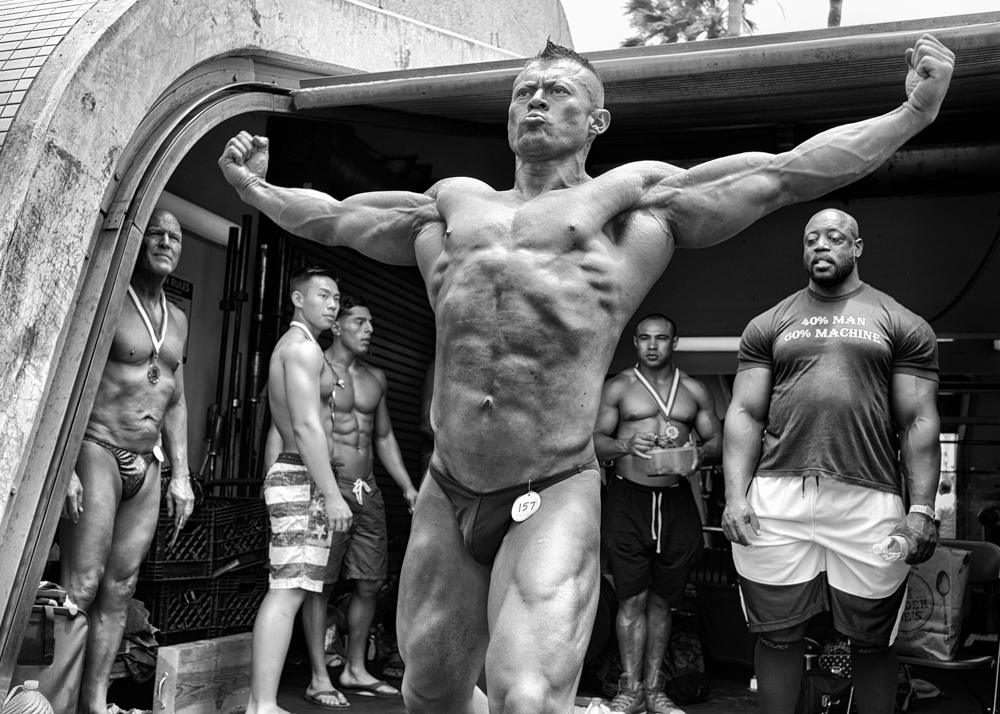 I hung out with my subjects for hours at a time. I truly got to know them, understand their passions, their struggles, and gained their trust. Not only did this lead to much more insightful images but I enjoyed the process a lot more: I was crossing into other worlds I would have never have set foot in before. I’m thinking of magical moments like being the proverbial fly on the wall in a van full of hippies doing what they do. This new documentary paradigm allowed me to see Venice Beach as a place struggling with its identity under attack by gentrification and corporate interests. I felt a sense of responsibility and urgency to document crazy free-spirited Venice moments while they were still happening while also warning viewers of the looming threats casting a shadow over this dying culture. I sincerely hope that the upcoming publication of this body of work as a book in 2018 by German publisher Kehrer Verlag will help bring awareness to the issues at stake before it’s too late. – Dotan Saguy 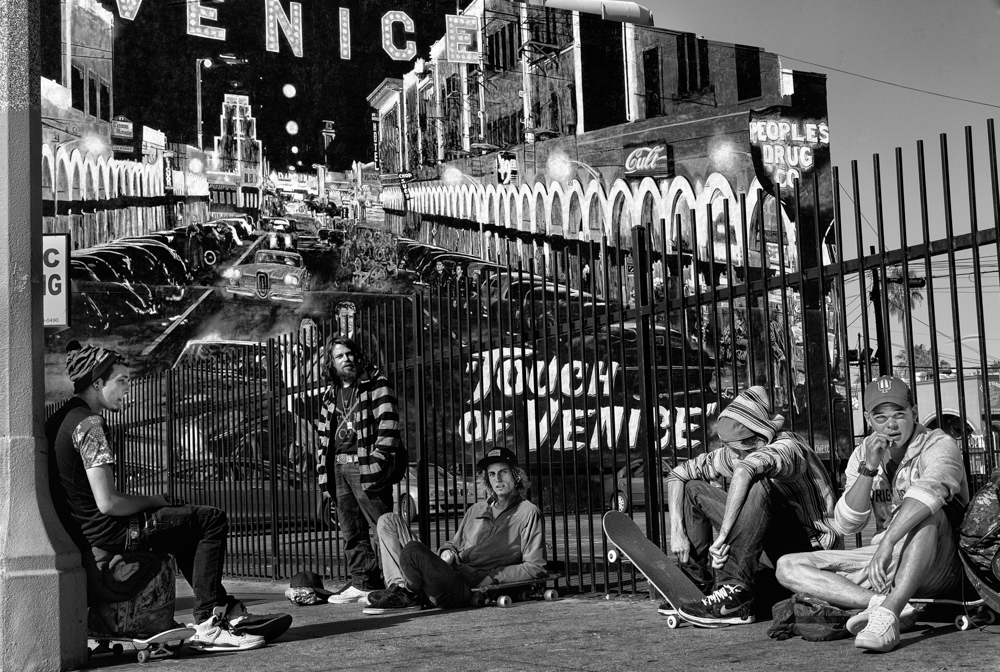 ©Dotan Saguy, from Venice Beach. A group of young skateboarders from out of town living the bohemian lifestyle on Venice Beach smoke marijuana in the early morning sun on Windward Avenue, the iconic “Touch of Venice” mural behind them. 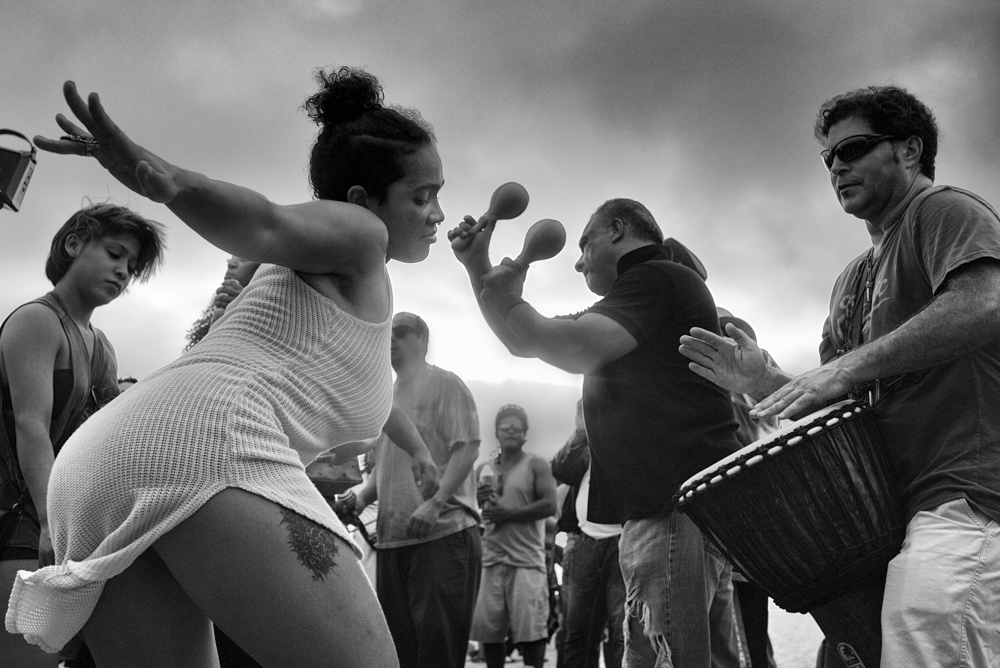 ©Dotan Saguy, from Venice Beach. A young woman dances to the entrancing rhythms of the drums at the Venice Drum Circle as the sun sets over the ocean on a warm Sunday evening. 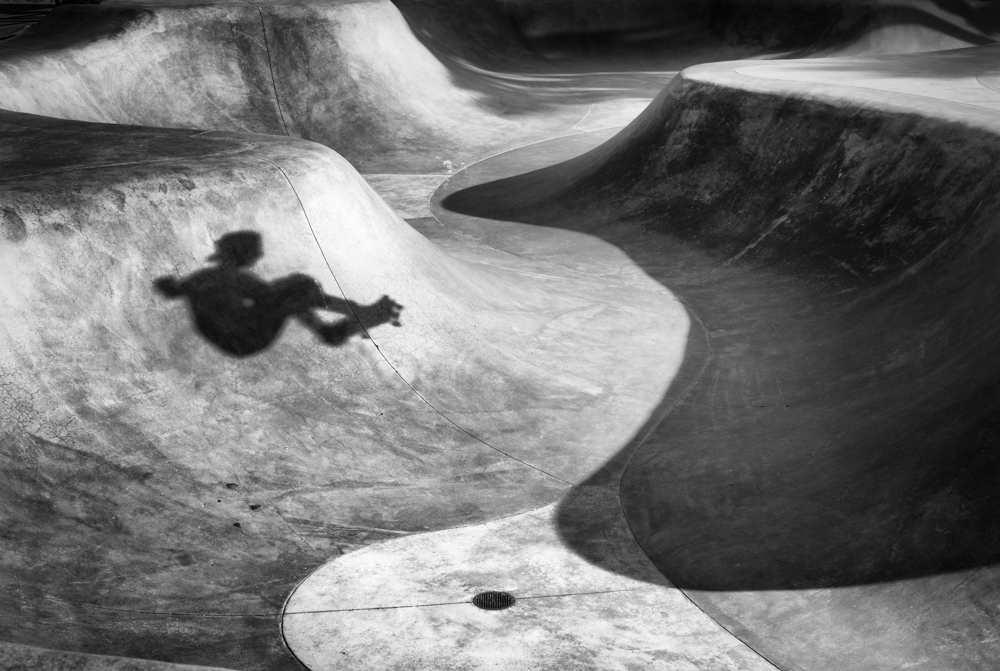 ©Dotan Saguy, from Venice Beach. A skateboarder jumps high over the Venice Skate Park letting only his shadow imprint the bottom of the pool. 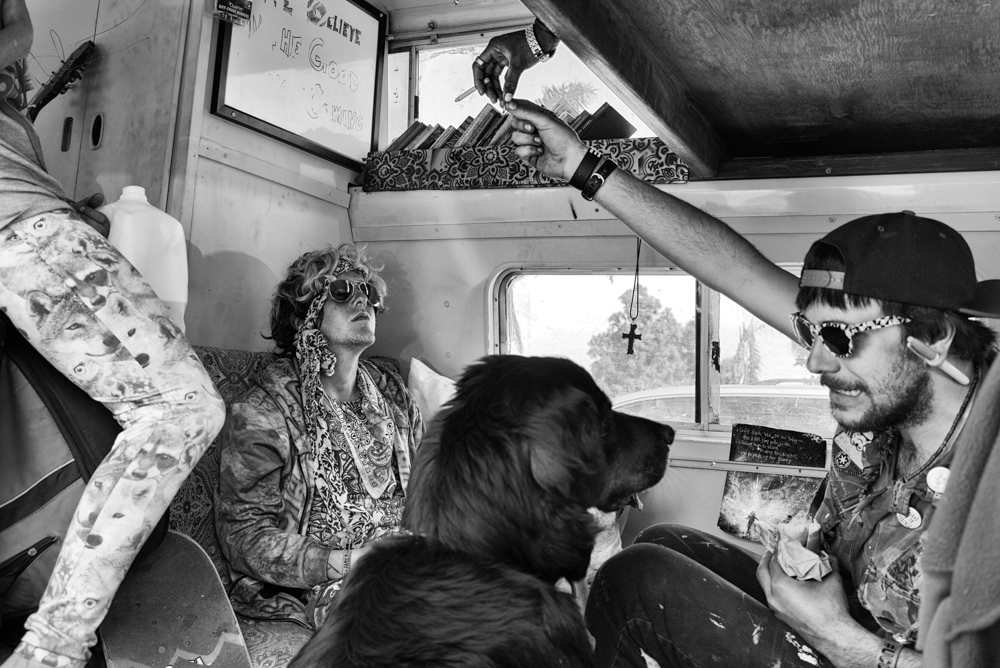 ©Dotan Saguy, from Venice Beach. Eating a sandwich and talking to a dog while passing a joint to a mysterious hand already holding a cigarette… A lot is going on in this old van parked outside the Venice Beach dog park where the bohemian lifestyle is in full swing. 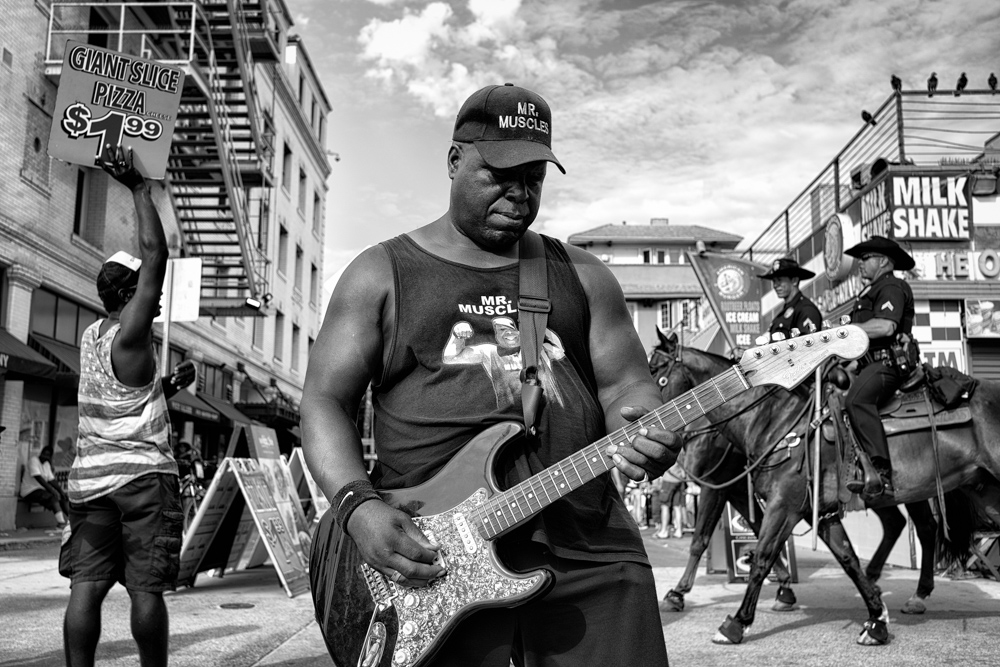 ©Dotan Saguy, from Venice Beach. Mr. Muscles, who has been playing on Venice Beach for many years, performs one of his songs while the Venice police patrols on horses. 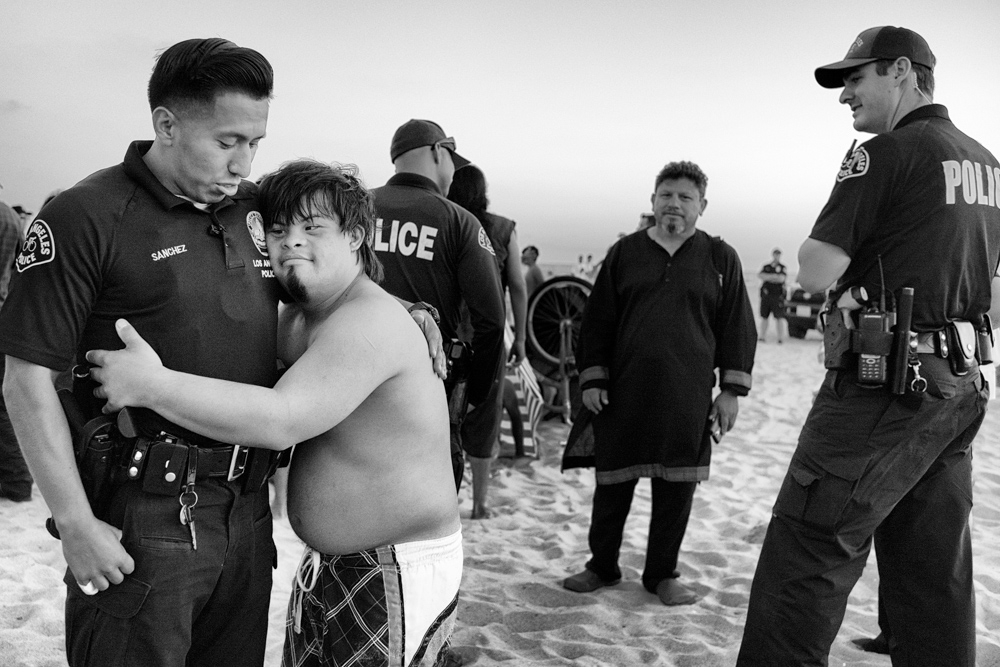 ©Dotan Saguy, from Venice Beach. A teenager with Down syndrome spontaneously hugs a policeman at the end of the Sunday night Drum Circle. The community style of policing practiced on Venice Beach has mostly been a success in recent years. 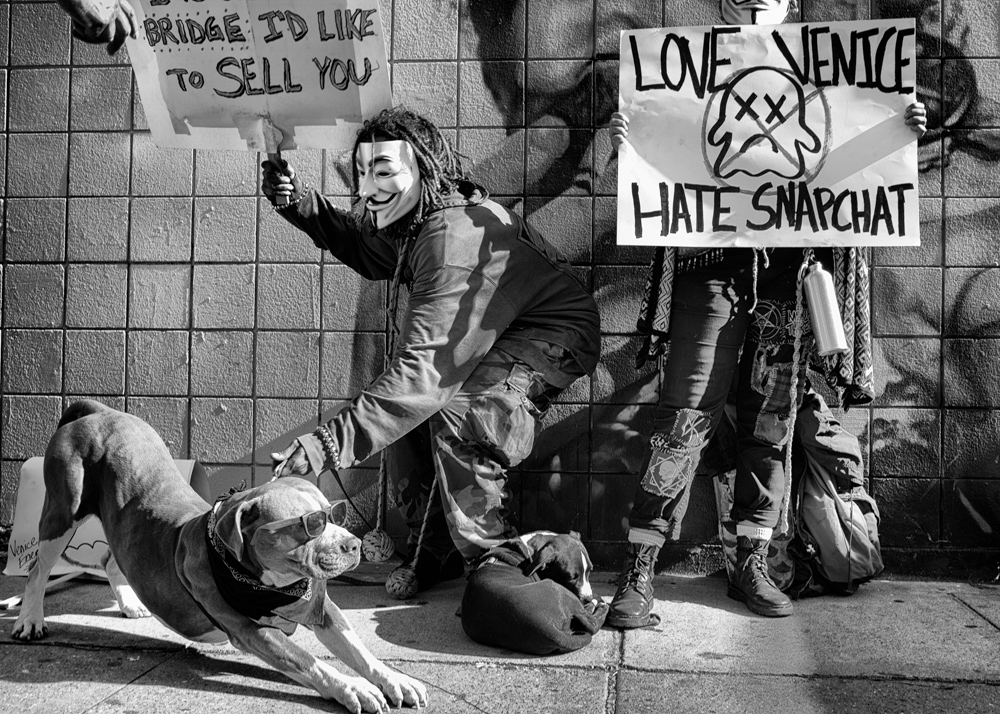 ©Dotan Saguy, from Venice Beach. Locals protest the ever growing presence of Snapchat on Venice Beach. Once a small startup, Snapchat has grown to occupy 35 different buildings staffed with thousands of employees on and around the Venice Boardwalk, pushing out long-time residents, artists and small businesses. 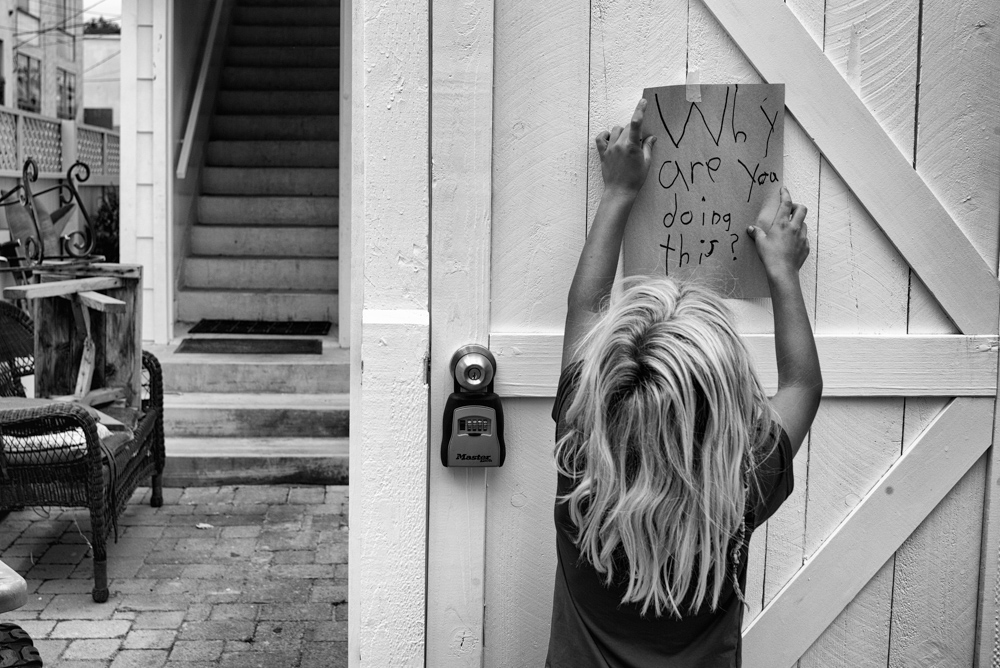 ©Dotan Saguy, from Venice Beach. Jackson, who was photographed snake-sitting on the sand only 18 months earlier, protests the eviction notice his mom just received by spontaneously posting a note on his landlord’s gate. 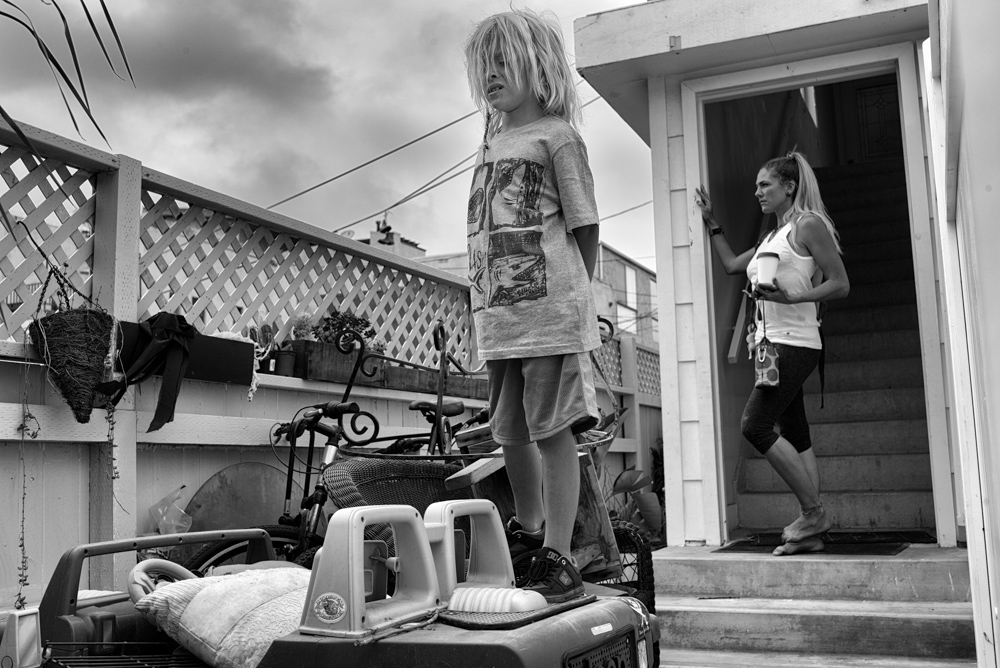 ©Dotan Saguy, from Venice Beach. Victims of the accelerating trend of gentrification on Venice Beach, Jenna and her son Jackson are contemplating the consequences of an eviction notice they just received. Jackson is standing on a pile of toys piled-up in the alley by the landlord who reclaimed most of the courtyard space they used to enjoy. 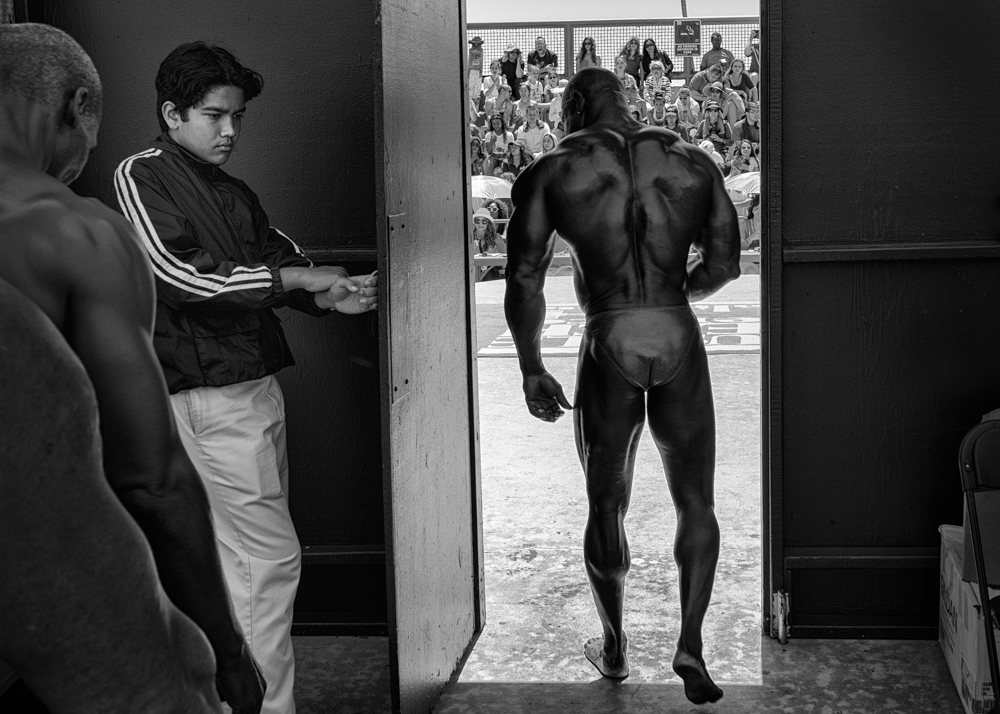 ©Dotan Saguy, from Venice Beach. A body builder enters the stage at the Mr. and Mrs. Muscle Beach competition.