Two years ago, I featured the work of Ferit Kuyas on Lenscratch. His project, Chongqing – City of Ambition, was being launched at Review Santa Fe and I became a big fan of the work. I am happy to share the news of that this project in now a monograph (his third), published by Schilt Publishing. The book is also accompanied by essays by Diana Edkins and Bill Kouwenhoven. This project reflects the old and new China, with images taken in the fog/smog of Chongqing that add a color palette not dissimilar to the old hand painted photographs from the turn of the century. The muted colors and striking photographs combine to make a powerful statement about a city in transition. For more on the series, Ferit has written an essay for Visura Magazine.

Born in Istanbul, Turkey, Ferit studied architecture and law in Zurich, Switzerland, graduating in jurisprudence from the University of Zurich. He now works mainly on personal projects, several focused on China. Ferit’s photographs have been shown in museums, galleries and festivals in Europe, America and Asia. His work is represented in private, corporate and public collections in the United States, England, Belgium, Switzerland, Germany and Turkey. He has received a number of awards, among them the Kodak Photobook-Award, the Guatephoto Award and the Hasselblad Masters. He is, indeed, a success story.

Images from Chonqing, City of Ambition 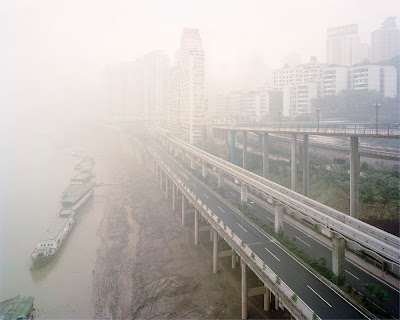 Congratulations on your new monograph, Chongqing – City of Ambition. Can you tell us how the book came about?

Thanks. When doing a large project I always have a book in mind. It is a really good way to finish a project. Like the score of something. A way to be respectful with my work and also a very good opportunity to share the work with a larger audience. Of course we have the web to share. A book looks just much better and we can touch it. I like that sensation.

I started looking for a publisher in 2007 when the project was almost finsihed. Difficult. There was already quite a bit of work from china having flooded the market and publishers where reluctant because they wheren’t sure if they could sell. I was quite persistent though and at one point Dewi Lewis started to get interested. I had submitted the book project to European Book Publishers Award and obviously Maarten Schilt from then Mets & Schilt (now Schilt Publishing) remembered the project from the jurying. We sat down at Rhubarb Rhubarb in August 2008 and we had a shake-hands after 5 minutes. February next year we met in Amsterdam and put the book together in the book designer’s studio. It was a very nice experience working with Maarten Schilt and with Victor Levie who did the bookdesign. They’re both wonderful people. 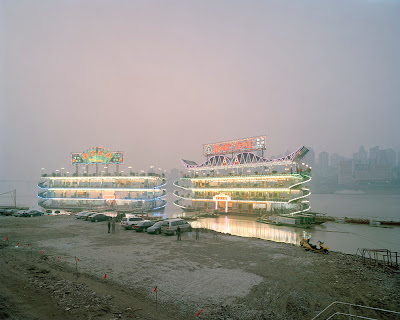 What brought you to this little known city? ” The Chinese city of Chongqing is little known in the West. Yet with its 32 million inhabitants, the city is twice as big as the Netherlands. Located on the Yangtze river in the province of Sichuan in southwestern China, it is one of China’s most rapidly growing cities.”

I went to China for the first time in 1997 for a photoshoot in Shanghai. Later I did a book project in Shanghai tohether with two photograher friends from Switzerland, Edy Brunner and Marco Paoluzzo. “Shanghai” got published in 2000. While doing the book I met my future wife. Her hometown is Chongqing. I got acquinted with the city when we went there to visit her family. I had heard many interesting things about the city before, but reality was even more exciting. 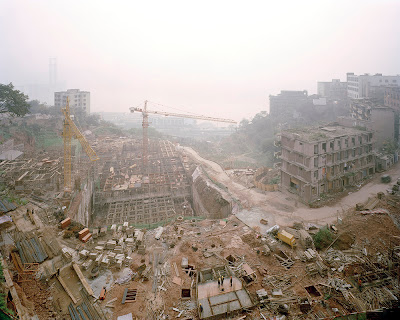 How did you get started on the project?

I knew right away that I wanted to do project there. I started thinking about it in 2002, went to scouting and photographing in 2003 and started the serious part of the project in 2005.

Usually I have some pictures in front of my inner eye before I start a project. And I like doing long term projects. During the initial campaign I prefer to work in a very open way, which means I like to photograph whatever I think is interesting. Later I define what’s important for the project and deepen those aspects. 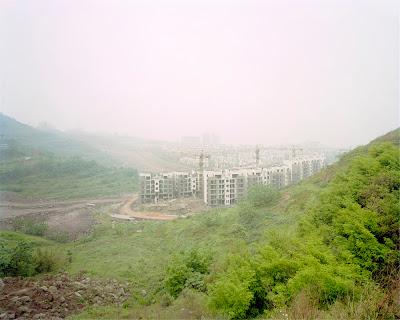 What is causing the pollution in Chongqing and did you personally feel affected by it?

The mist and fog in Chongqing is real. It is athmospherical. The city’s nickname in China is City of Fog. It’s been like this since a long time. Of course there is also pollution from several kinds of industry in the athmospere. Surprisingly I never felt affected by the air quality. 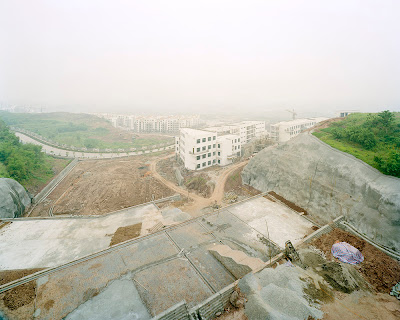 Have you shown this work in China? And if so, what was the reaction?

I’d love to show the work in China as I’d like to give something back. The only time it was shown in China was in Pingyao when The Stephen Cohen Gallery presented City of Ambition in their booth. 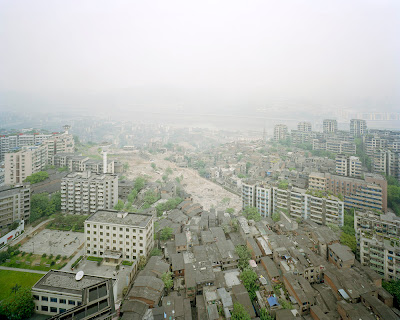 What do you take away from your time in China, and from producing this body of work?

Many good memories. Family and friendship. Having been a witness of constant fast changes. Knowing that will be the same when I go back. I live near Zurich. The city looks almost the it used to 40 years ago. Some buildings changed. In China you wouldn’t recognize the same place anymore after 40 years. My time in China took away the fear many people have of that country.

City of Ambition is my third book and my first large project in color. It looks like i’ll stick with color for a while. 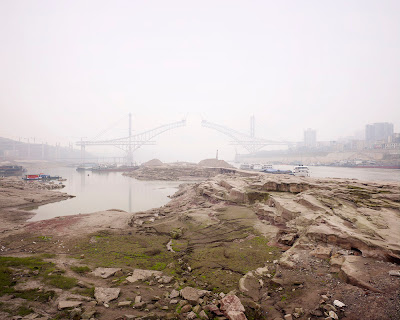 I love your series, Chinese Smokers. You were able to capture wonderful portraits of contemporary Chinese smokers and the beautiful packaging of their cigarette boxes. I realize that with both series, Chongqing – City of Ambition and Chinese Smokers, no matter how beautiful or powerful the images, there is a layer of sadness and doom about the future of China present in the photographs. Did you feel this?

Thanks. Probably it has something to do with my state of mind. I was quite sad myself often in my deepest inside. It was the time when my marriage started breaking apart. We got divorced shortly after I had I had finished the project. Looking back I can see that I produced most of my best work when I wasn’t happy. 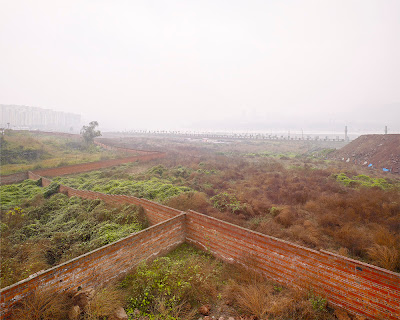 Can you talk a bit about your new project, Aurora?

Aurora is a visit to Guatemala City. I named it after the local airport because it has such an optimistic meaning reflecting the attitude of the locals. I went to Guatemala for the first time in 2010 when i won the Guatephoto Award. That brought me back again for a solo show and a workshop on landscape photography for La Fototeca, the local center for photography. I took this opportunity to start the new project. again it is about the urban landscape. There will also be a part emphasizing the people of Guatemala City in their environment. It will take a while to finish. More to come soon. 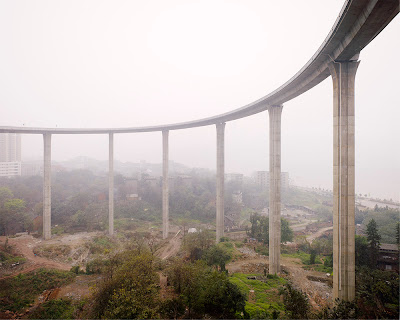 What equipment do you use?

I like working with large formats. Most of my work from the nineties is done with 8 x 10. Somehow I felt that my imagery started being too static and I also started working with 4 x5 and again with medium format. That brought back some dynamic into my compositions with the 8 x 10. However I decided to do City of Ambition with 4 x 5. The larger format would have created too many logistic problems.

I work very quick. Carrying a 4 x 5 monorail (an Arca Swiss f-line) on a tripod on my shoulder and a little bag with two additional lenses and some film holders is the ideal way to get around. For the last part of the project I worked with an Alpa xy, two Rodenstock HR lenses and a P45+ back. I’m quite pleased to see that nobody can tell the difference between the two processes when the photographs are on display. 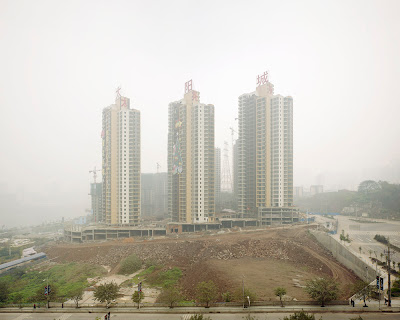 Find out what you really want to do and then work on it constantly. Be patient and be critical with your own work. Believe in yourself – that’s very important.

Presentation should really be first class – good prints that is. Editing is always ahuge challenge, outside help should be considered here. I often get help from curators and peers.

For networking portfolio reviews were of tremendous help for me. Once you got a strong project together go for it and find out if portfolio reviews work for you. In worst case you’ll meet a bunch of really good photographers at the same stage of their career. Networking with your peers is very rewarding. I made some really fine friends. 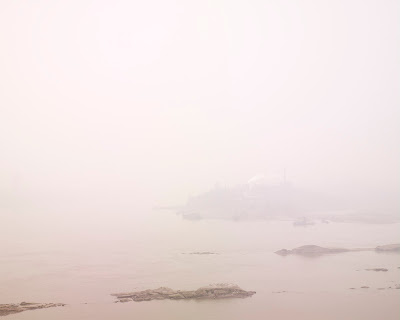 I started doing decent work in the late eighties. I had studied architecture and law and while I was doing my doctorate in law I decided to pursue photography in a much more serious way. I never finsihed that doctorate and I have been a photographer since. Photography is a long term process, it never ends. not having studied art or photography I was an outsider for a long time. I still managed to show my work regularly and publish two books. 2007 I was at Review Santa Fe. I found out that the format of the review works well for me. Everything went from there. 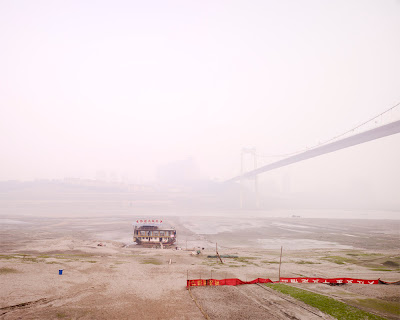 Yes, of course. Especially when I start something new there is a lot self-doubt involced. Also when I compare my work to the work of artists I respect very much.

Creativity is a strange animal. Its here then its gone. But I always know its going to be back again. 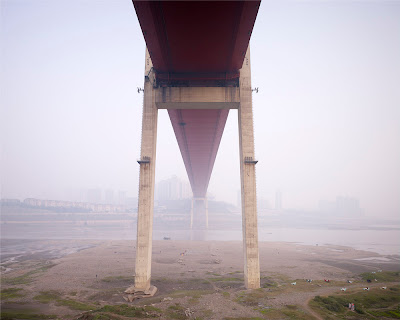 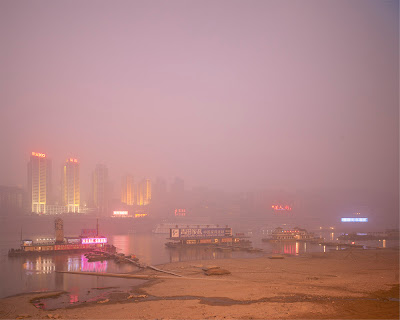 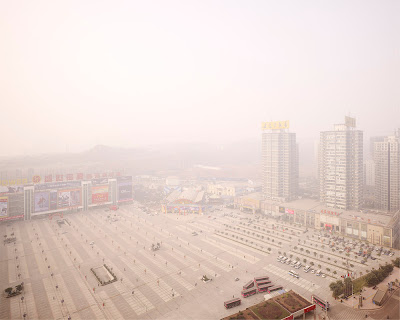 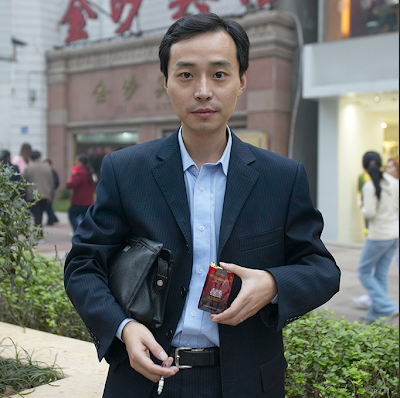