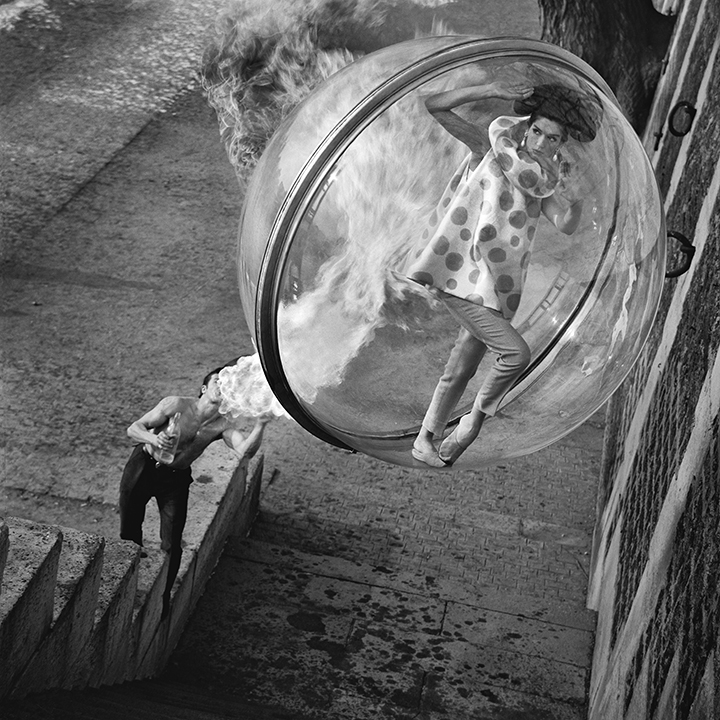 Something deep inside of me was stirred from the moment I saw Melvin Sokolsky’s Bouquet Seine photograph at A & I Photo in Hollywood, when picking up prints one morning. Seeing such an imaginative, masterful, moving and powerful photo inspired me.  The model was flying in the air in a bubble above the Seine River. I began to read about Melvin. I was and continue to be struck by his passion and exceptional creativity and especially how he defied convention. Melvin Sokolsky’s photography is a great inspiration to me and I believe he is one of the last great living masters of this changing art form. From hand drawn sketches by Ali McGraw who was his assistant for six years including the Bubble shoot and the recent treasures of color versions, Melvin continues to inspire me. Each opportunity I have to spend time with him is a supreme lesson because of his wisdom and care in teaching me. An interview with Melvin Sololsky follows.

Melvin Sokolsky was born and raised in New York City where he started his distinguished career as a stills photographer. At the age of twenty-one, photographer Melvin Sokolsky joined the prestigious staff of Harper’s Bazaar, whose art department was then led by legendary art director Henry Wolf. Wolf, enjoyed challenging Sokolsky. “I didn’t hire you for my ideas, I hired you for your ideas.” Sokolsky went on to produce some of the most innovative fashion images of the 60s. Perhaps most notably his 1963 Bubble Series, in which he depicted the fashion model floating above the urban scenes and landscapes of Paris in a transparent spaceship-like sphere. Women flying effortlessly through the air, rooms constructed as to appear upside down, household objects magnified to colossal proportions-these are all elements of the bizarre universe of Sokolsky’s memorable photographs. 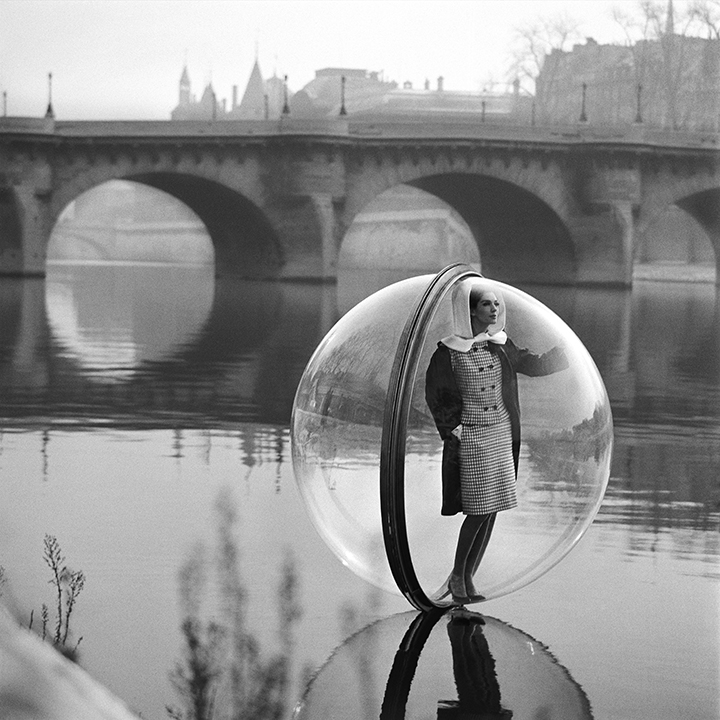 Paris 1963 / Paris 1965 is the definitive collection for all 74 of Sokolsky’s printed images from the Bubble and Fly series, including more than a dozen previously unreleased and alternate visions of his iconic series, behind the scenes documentary photos, and outtakes, and an intimate insight into Sokolsky’s process and inspiration as he developed his incomparable Fly series. Each copy is signed and numbered by the artist and is delivered with an etched Lucite slipcase designed by Sokolsky himself.

The books can be ordered here. 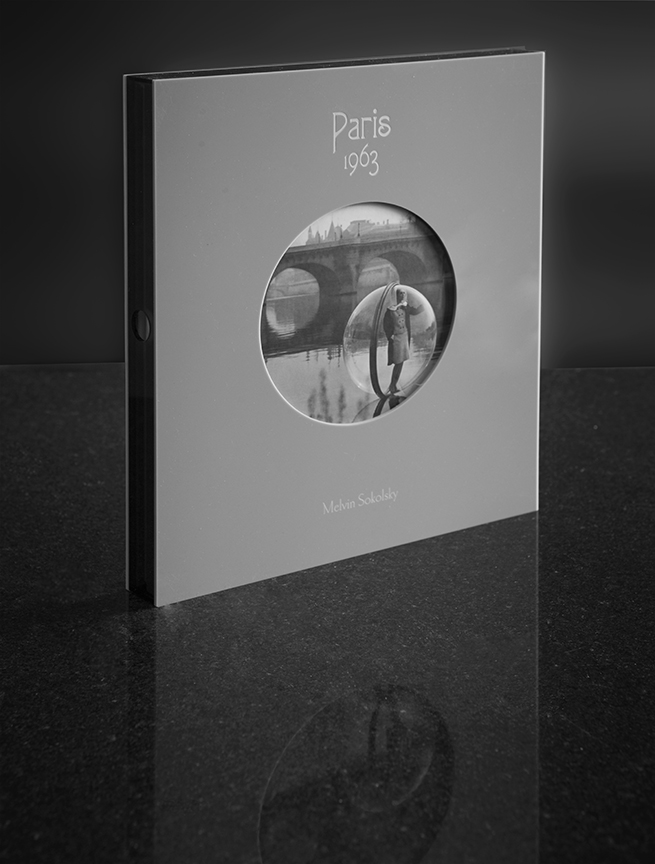 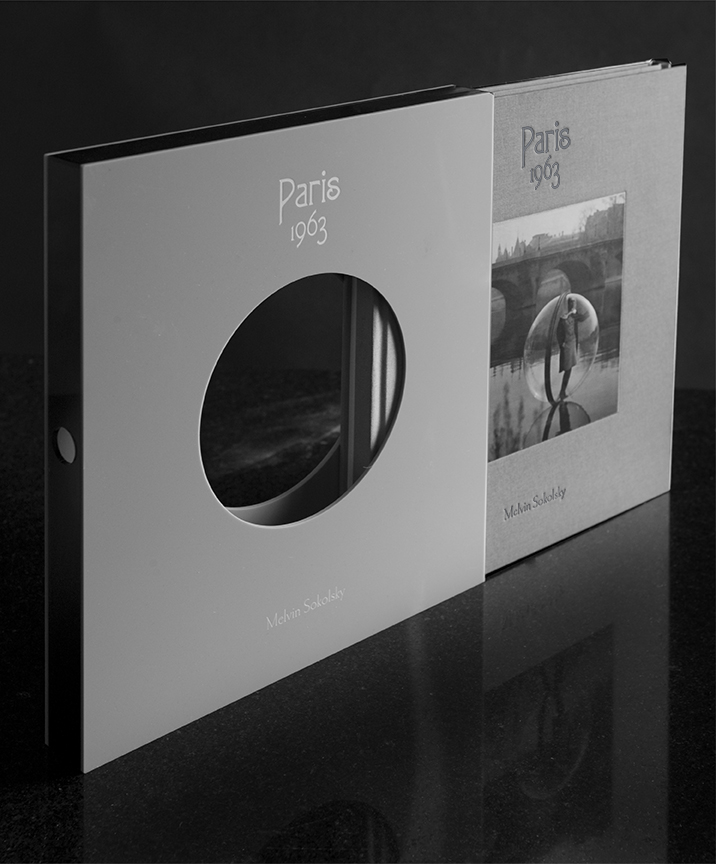 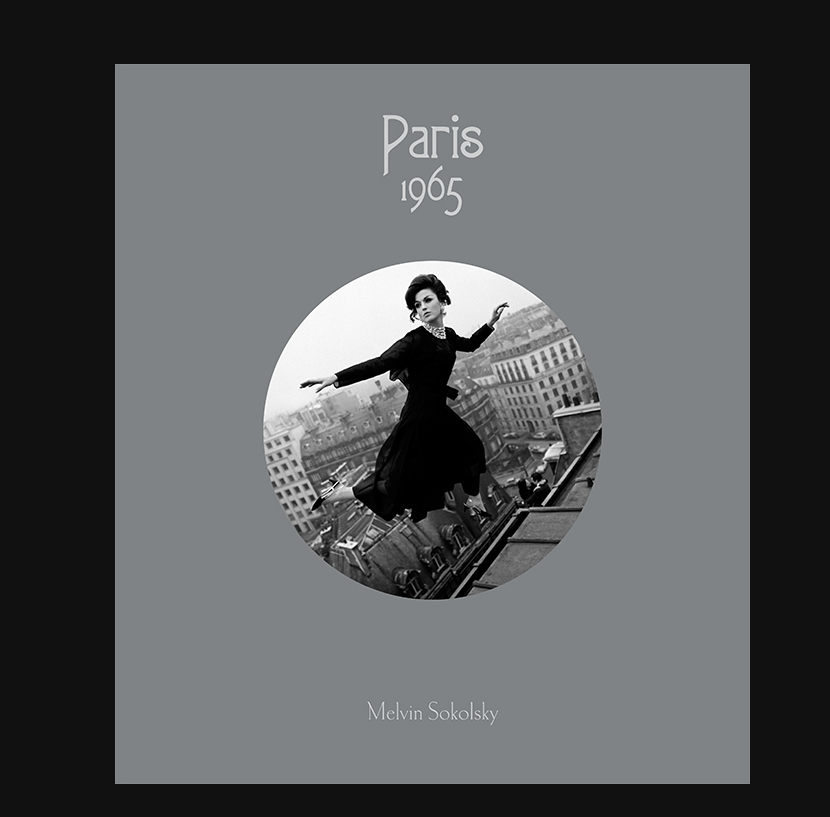 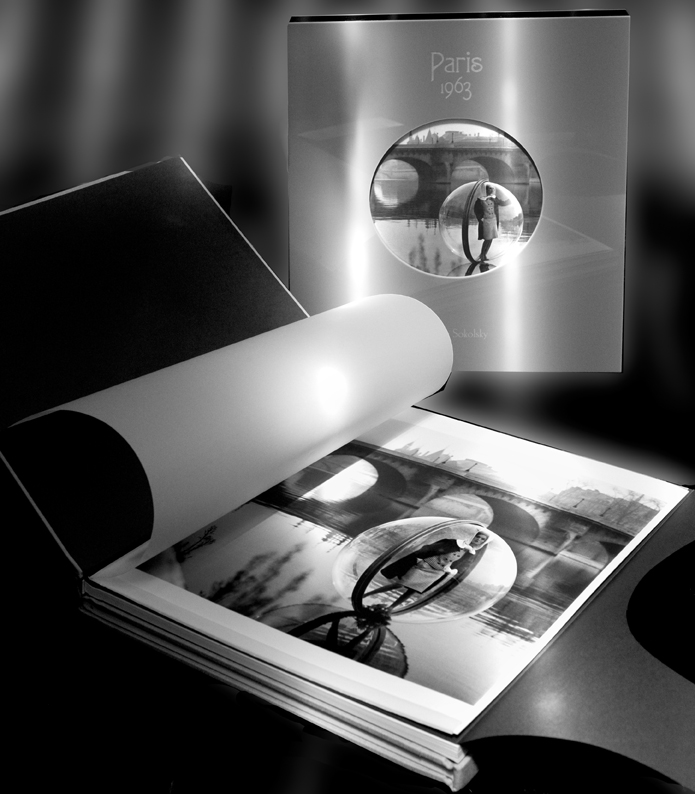 From the age of 10, you used your father’s box camera. What was the initial appeal of photography for you?

My father would take pictures of the family with a box camera on the porch of the summer vacation house that my mother and aunt rented for the school vacation month.  My father would then hand me the camera so I could take a picture of him surrounded by the family.  He had the pictures developed at the local pharmacy and placed them in a photo album.  I would look through the pictures in the album and thought it was magic.   I would look through the album for hours with wonderment and somehow knew I wanted to become a photographer. 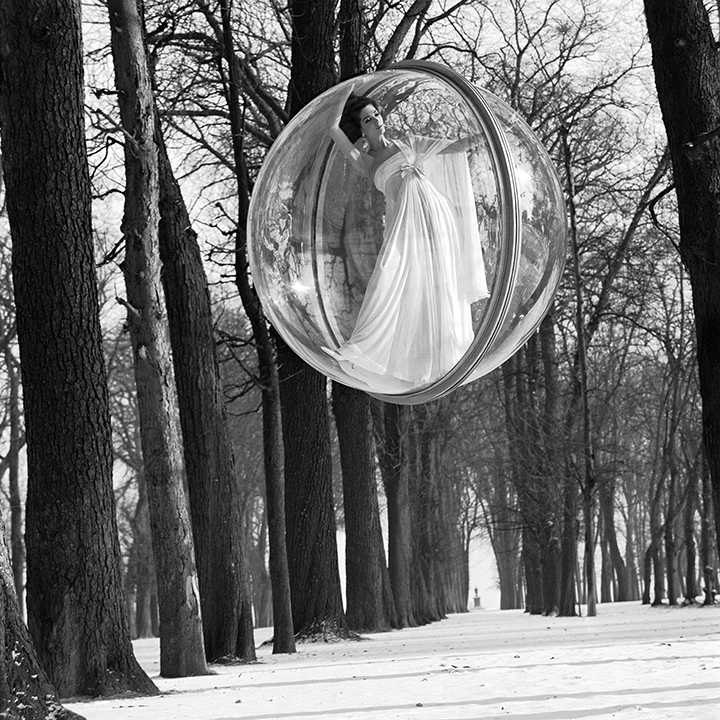 Melvin, the story of you wandering in the offices of Harper’s Bazaar in the fall of 1959 at the age of 20 is well known by now.  Could you share with our readers if Diana Vreeland and Richard Avedon embraced your idea of hanging a model in a plexiglass bubble that you would create all over Paris?

Actually it was the new art director at the Bazaar, Henry Wolf, who saw an advert I did for a fur company that appeared in the magazine.

He called me and asked if I would like to shoot some pages for Harper’s Bazaar.  I thought it was my brother playing leading me on; so I hung up the phone.   When Henry Wolf called back and said I think we were disconnected that I realized it was real.

Henry gave me complete freedom to shoot the clothes the editors choose in any way that pleased me.  Some of my early images were not liked by upper management; who in many cases rejected them.  It was Diana Vreeland who defended my pictures saying they were a beautiful new vision in fashion photography.

Richard Avedon was not as complimentary.   He told the editor in chief, I would not get the bubble off the ground.    I secretly built the bubble and shot the dress for the March 1963 cover in the bubble from New Jersey looking toward New York.

I showed it to Nancy White the editor in chief the chrome.  She turned to me and said.  “ I love it, it magical, Congratulations it’s the March cover” 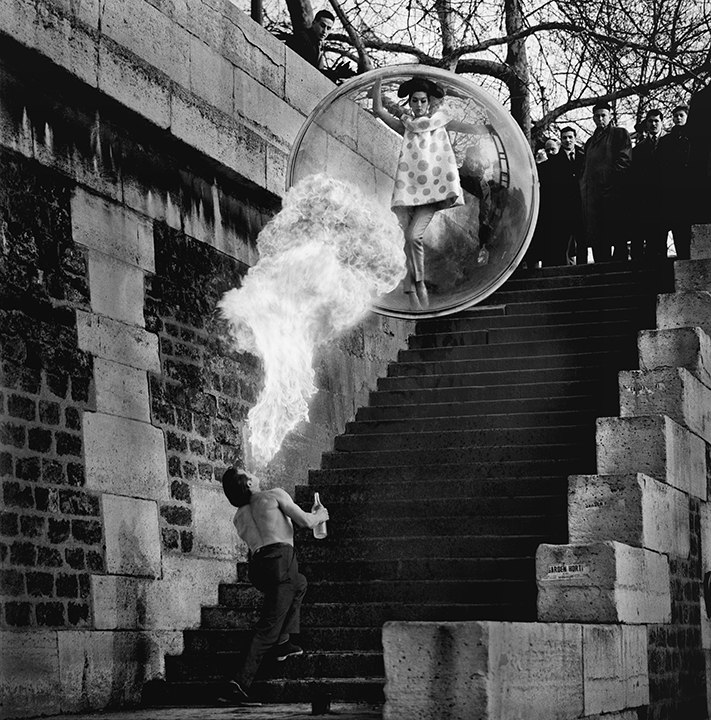 Besides The Garden of Delights by Hieronymus Bosch, where else have you found inspiration for your photographs?

I loved the great painters;  Velasquez, Goya, Rembrandt, Caravaggio, Vermeer, Leonardo da Vinci.  I learned that great images were about; ideas and palette. 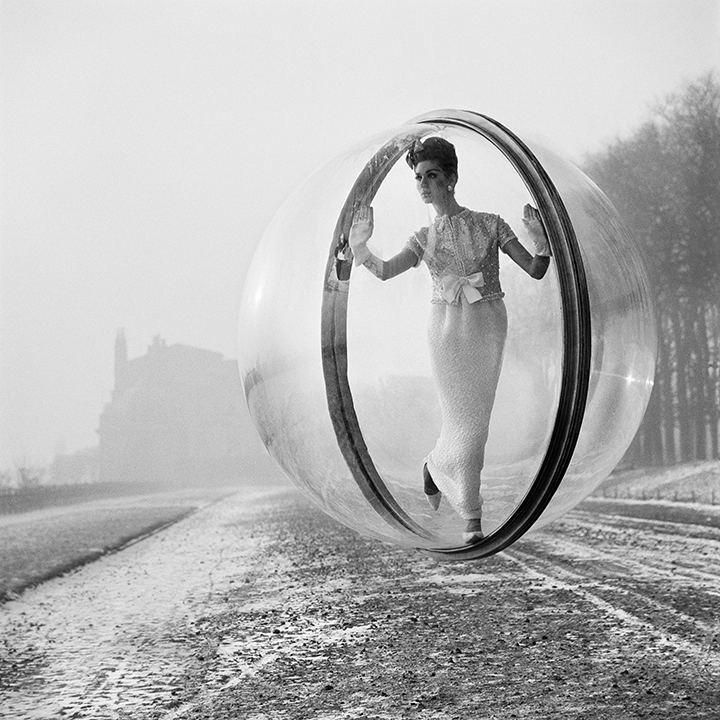 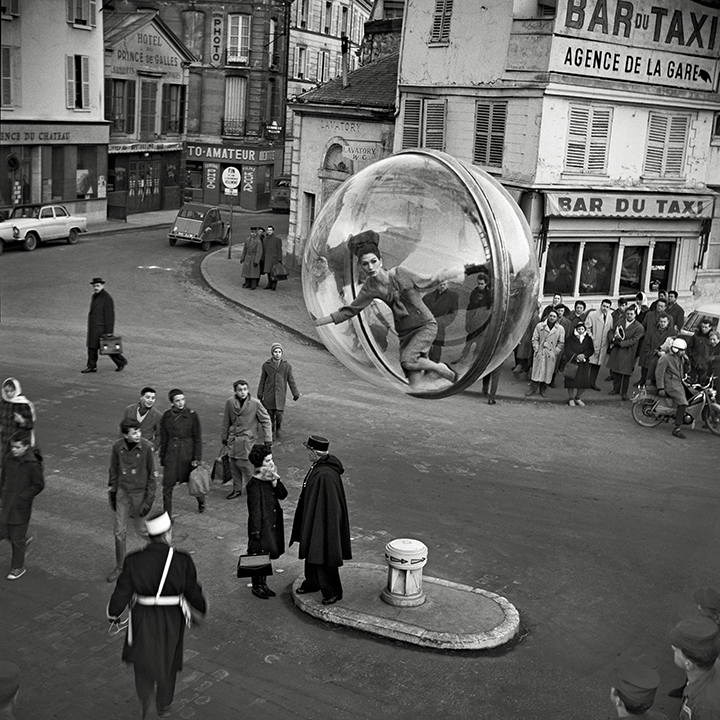 From the linen covers to the signature in pencil to the silver gelatin prints included, your books are works of art. What inspired you to self publish your own books?

I never liked the way my pictures were printed.   I wanted to be in control of my work.   I wanted to design my books so that they reflected my vision. 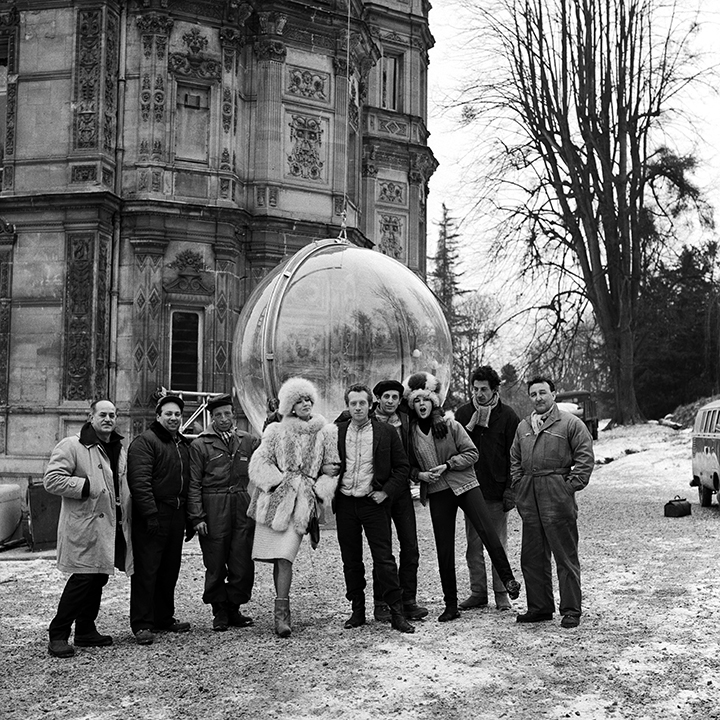 One of my favorite photos is your self portrait + 1, “Simone and Me.” I love self-portraiture, always have. This particular photo is a favorite of mine for many reasons. It’s you: self assured, independent, self-confident. How did you create this photo?

When I finished the shoot in the wall crumbling loft, I was pleased and invigorated.  I knew the shoot would be special.   It was shot with a Deardorff  view camera.   As a moment of the shoot, I set the shutter on time ran into the picture next to Simone, mimicked her pose; one shot, and that was it. 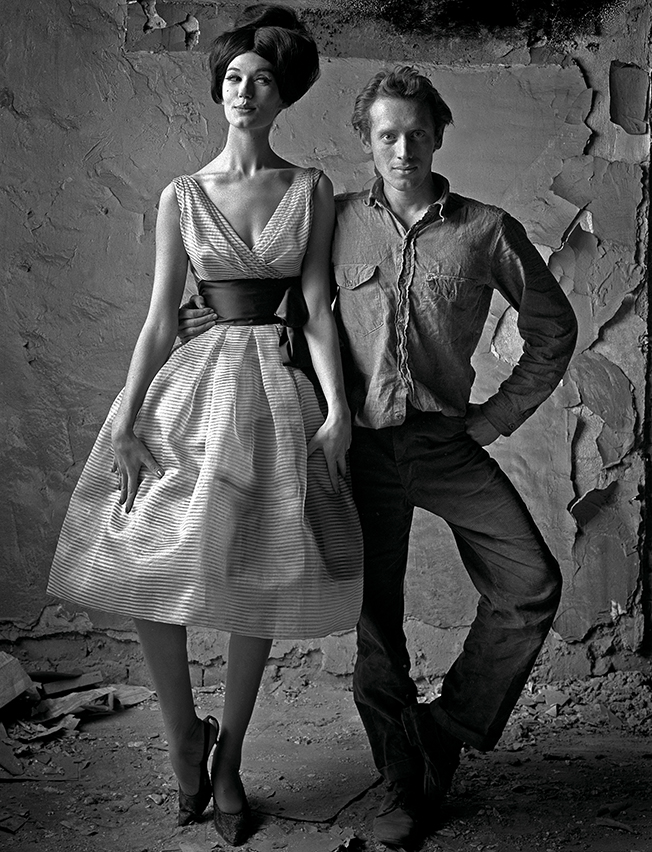 ©Melvin Sokolsky, Simone and Me

You have the ability to create narrative art and enduring photos from simple fashion images. Can you talk about your process?

That’s a whole book.  I have a sketch pad on my desk.  When an Idea comes to me; I write it down.  Sometimes the clothes that trigger the idea.  Sometimes the topical stories of the day stimulate my imagination.

You revolutionized fashion photography in the 60’s. Your instincts have created powerful, iconic images. What advice do you have for photographers today?

Never copy a photograph; even if you think your version is better. 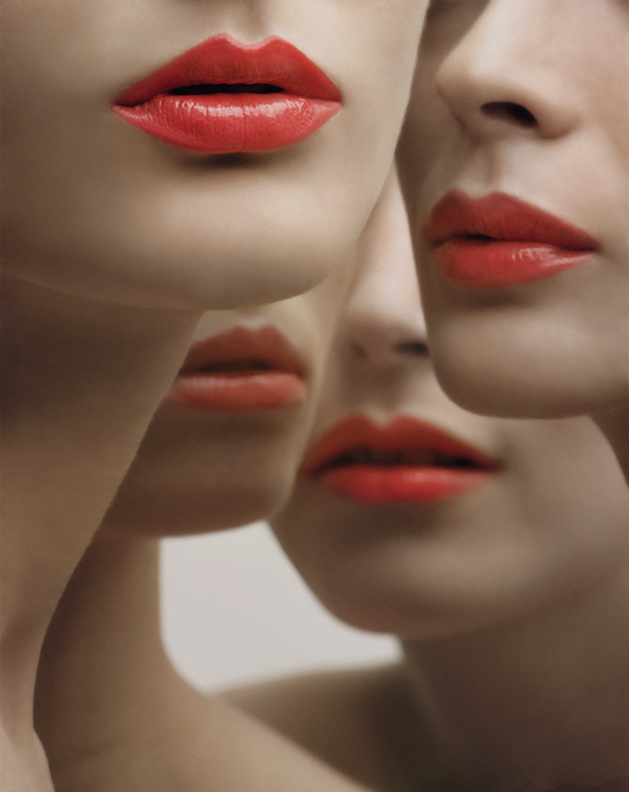 In a time where everyone is a photographer, using their iPhones and have no understanding of light, composition, shutter speeds or aperture. Where do you see photography heading in the future?

The new tools are great.  You can aim your iPhone at anything and a decent quality image is captured.  The image imbues the maker with addictive feelings of self satisfaction.  A form of sex with a smartphone.

One must ask ones self if they have a true interest in photography.   Are my images a true reflection of who I am.   If not, free yourself of the addiction.

At the moment corporate America is controlling the market place with automatic everything.  Soon you will not be able to buy a car you can drive.

There will always be individuals who will resist and create images that become iconic.

For me, I am working on an invisible camera.   When I touch it I will become invisible.

I bet you can’t wait to see those images. 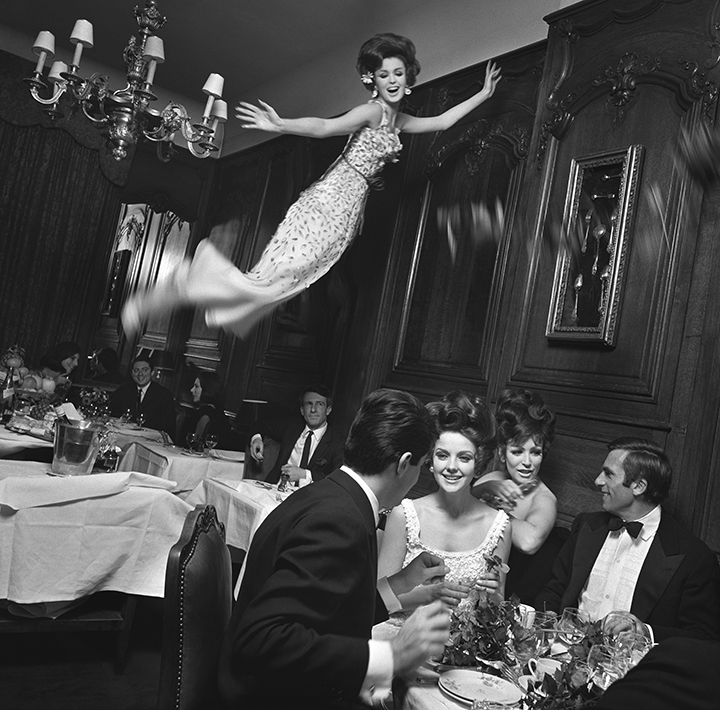 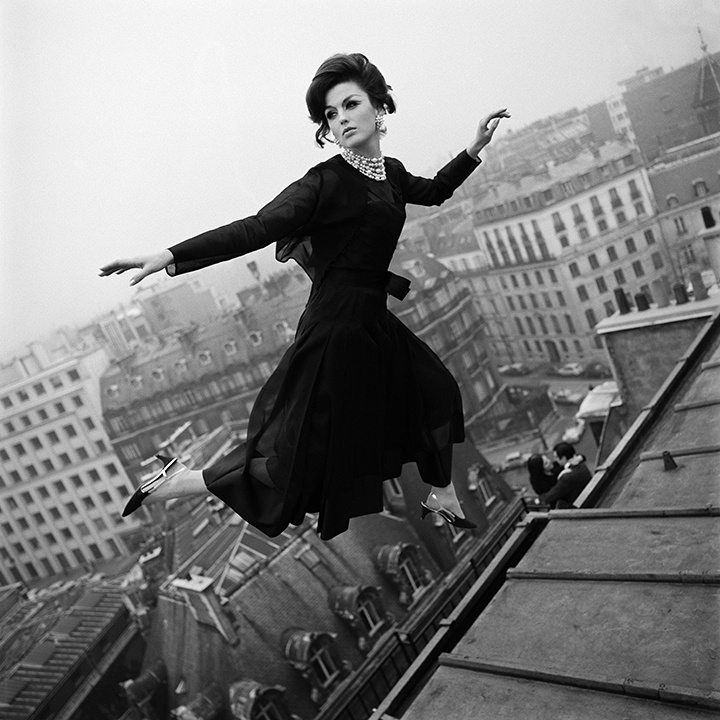 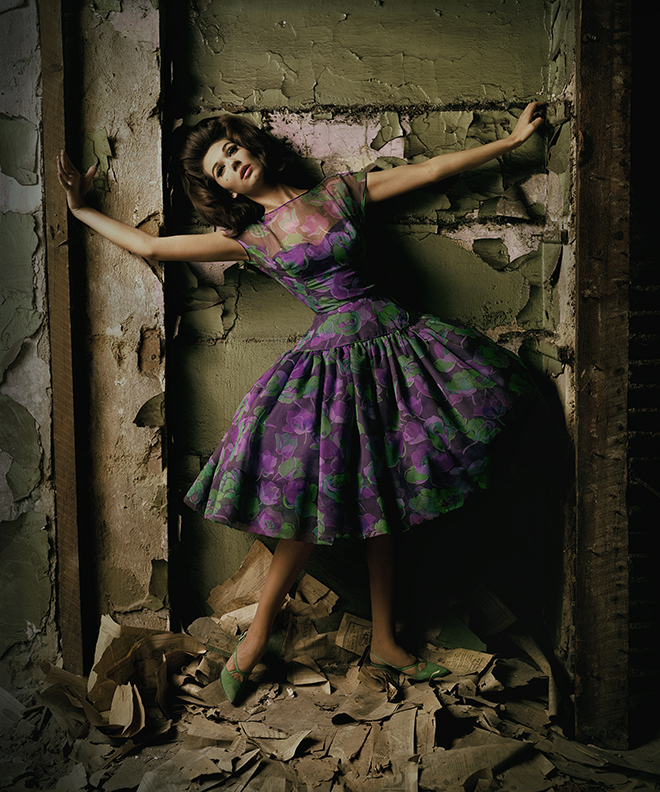 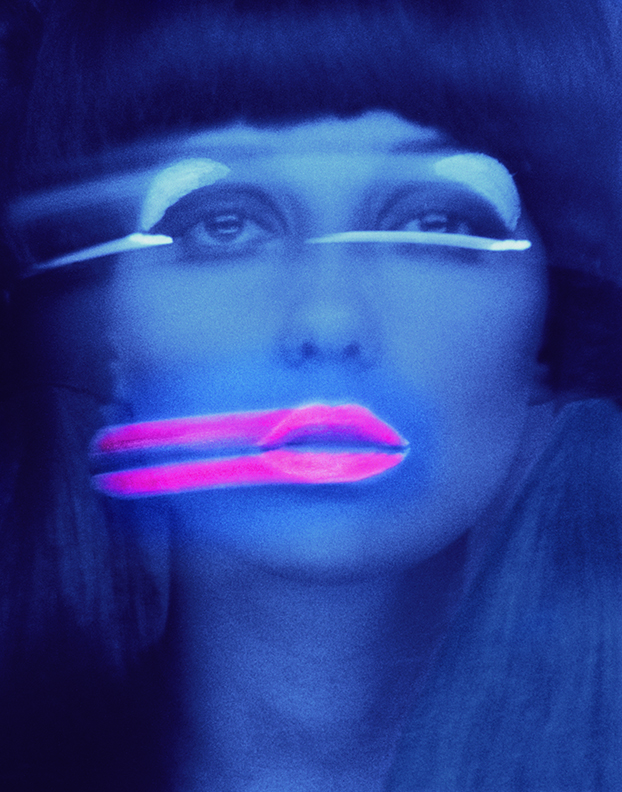 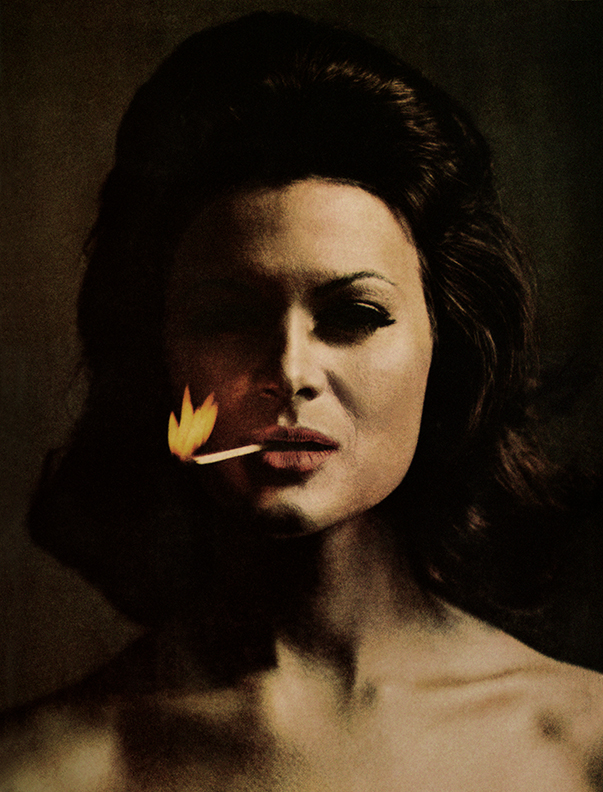 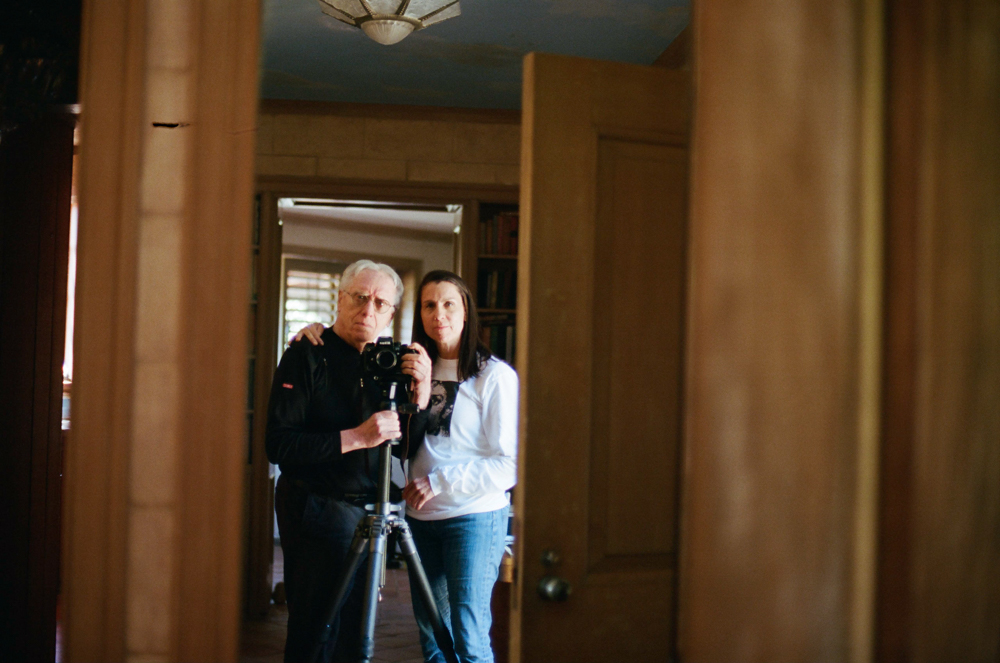 Hannah Kozak was born to a Polish father and a Guatemalan mother in Los Angeles, California. At the age of ten, she was given a Kodak Brownie camera by her father, Sol, a survivor of eight Nazi forced labor camps.   With her camera in hand she began to explore her fascination with photojournalism at the age of ten. For more than twenty-five years, her work as a stuntwoman in the film industry provided her the opportunity to capture candid, behind-the-scenes pictures that penetrated the illusion of Hollywood magic.  Hannah’s extensive travels have given her the ability to capture images of far away lands exploring the innocence and truth found in the faces of children all around the world.  Hannah ‘s solo show is currently showing at The Los Angeles Museum of the Holocaust from May 20 – August 20, 2018 . “Survivor: My Father’s Ghosts. Her 8-year project on her father, retracing his foot-steps through the eight concentration camps in Poland that he survived.

“I use my camera as a means of exploring my feelings and emotions. My photos are my emotional predicaments. When someone allows me to photograph them, they give me a piece of themselves that I can forever hold onto. In moments of melancholic desire and solitude, I can feel them again from the connection of our photos.”

Hannah has turned the camera on herself, her life and her world. She continues to look for those things that feel honest and real, using her camera as a means of exploring feelings and emotions. After decades of standing in for someone else, she now is in control of her destiny and vision.

“My photographs are direct, honest and without pretense. I love natural light. Artificial lighting is a travesty of reality.”