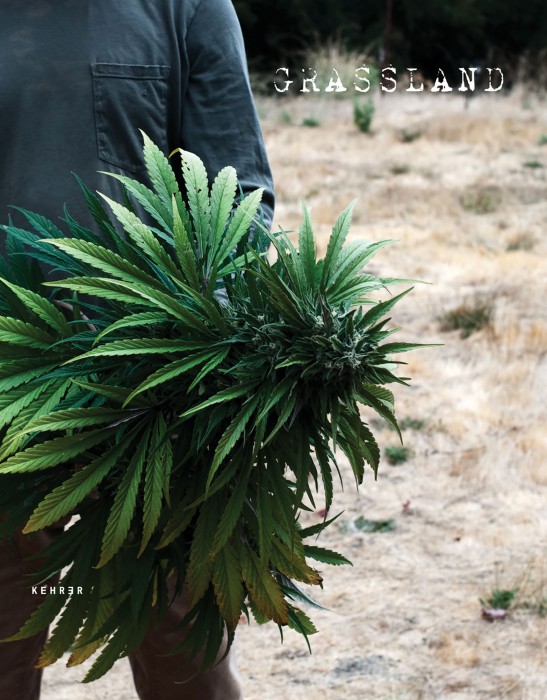 How few of us have a ring side seat into a universe that is kept on the down low, yet is part of the cultural zeitgeist? Photographer H. Lee (a pseudonym) examines the growing, cultivating, and processing of the marijuana in the new monograph, Grassland, published by Kehrer Verlag. The packaging of Grassland has been carefully considered, with a variety of offerings: a regular signed edition, a deluxe edition — hemp-covered sleeve with 1 8″x10″ print (choice of two), and a collector’s edition – hemp-covered box with 3 8×10 prints, scented secret stash drawer, colophon rolling papers and matches…. 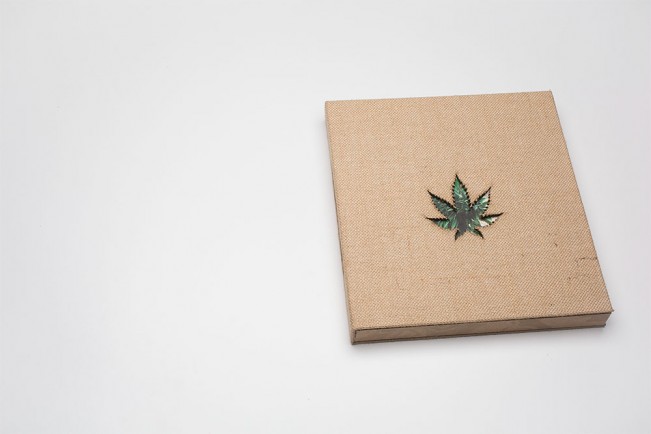 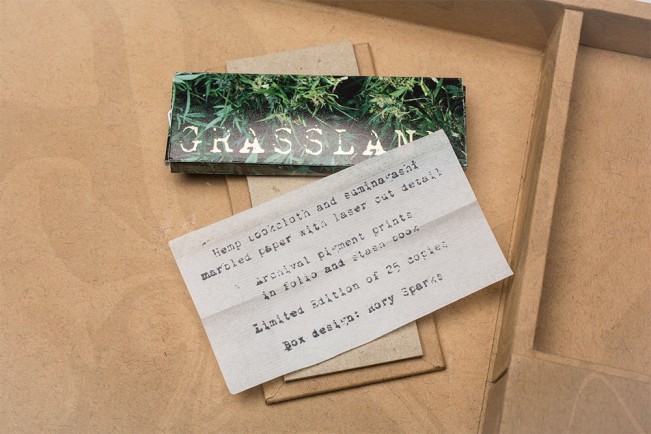 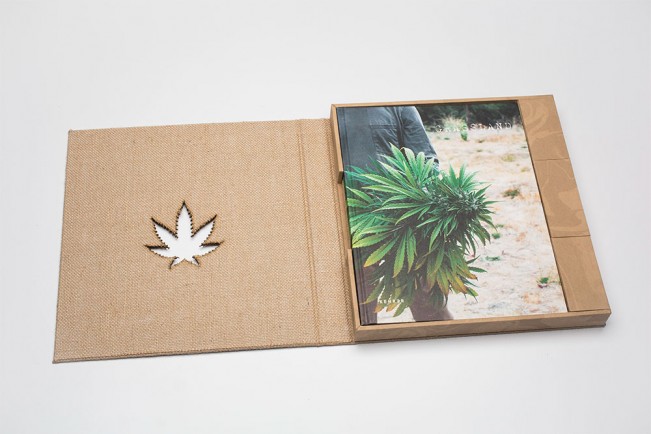 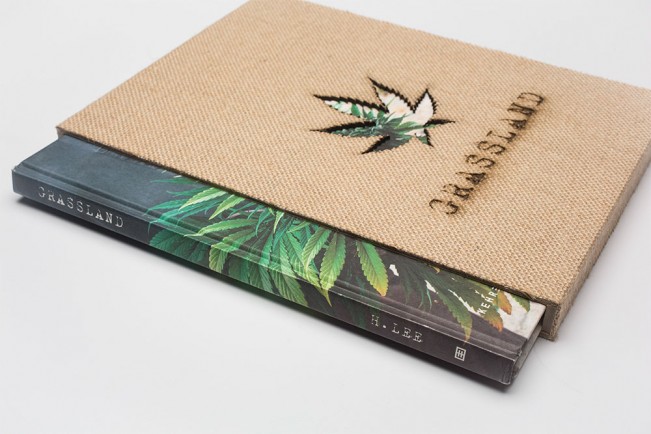 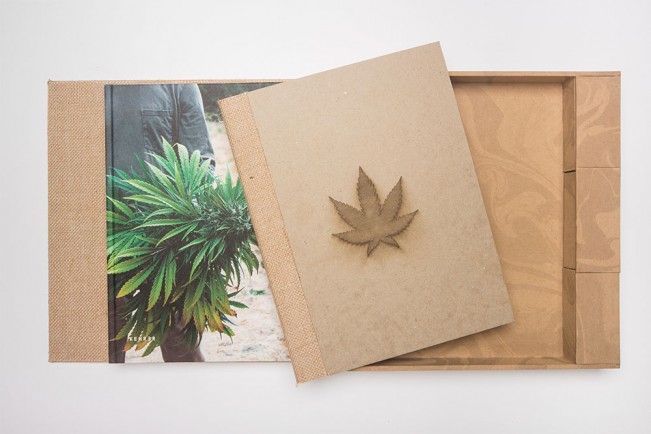 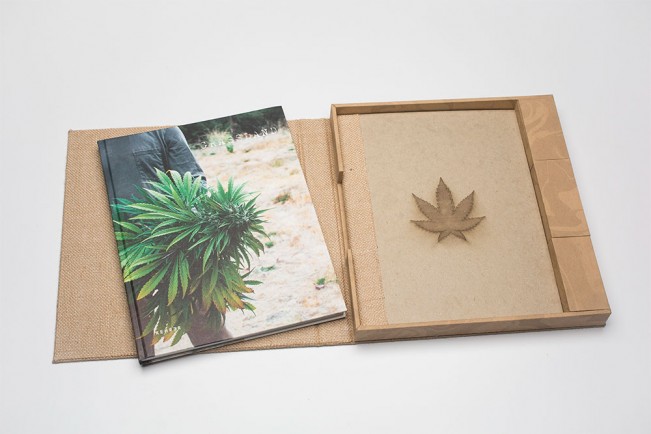 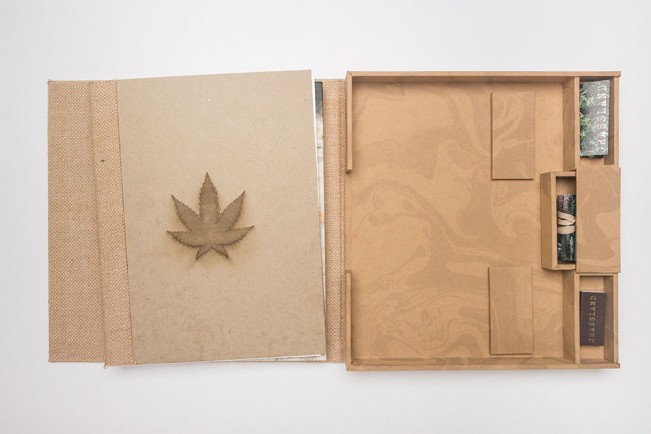 Because H. Lee prefers to protect the participants in this project, there is no bio, but an interview with the photographer follows the artist’s statement.
Grassland

A few hours north of San Francisco, along the coast, lies a rugged landscape of towering Redwoods and Douglas Firs. Cut with rivers and fog, it is iconic American terrain, which draws countless RV-towing tourists who wind up and down logging roads all summer long.

But beneath this layer of green and golden splendor, there exists an unseen world that no maps can find, only a discriminating eye for unmarked dirt roads. To the initiated, there are signs, as clear as the highway billboards offering hydroponic paraphernalia, medical cannabis consultations, trimming solutions and turkey bags in bulk. These services are welcome flags to cannabis country, where droves of marijuana growers, both indoor and outdoor, hide in the hills and make their living. 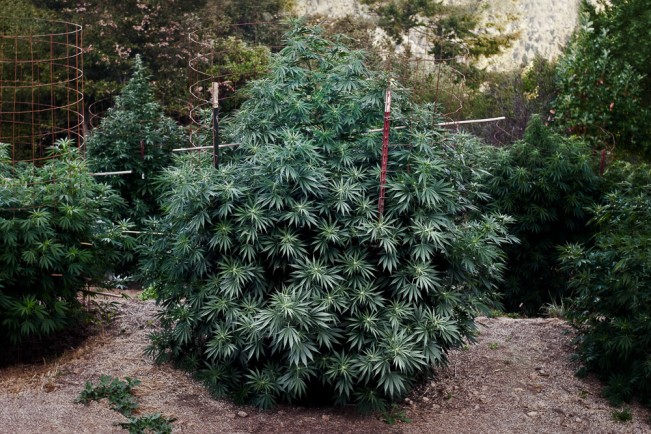 The first time I entered this world, I was totally ignorant to the world of pot farming, and riddled with judgment. It took some time for my outsider eyes to adjust to see what was all around me — behind locked gates and camouflaged cabins, past generators and barking dogs, protective firearms and diesel trucks — but also to gain the trust of the community. It is an eclectic group, bound together by a deep knowledge of growing techniques, along with a strong distrust for outsiders; suspicion is a necessary survival trait. These farmers are lured by the single magical and medicinal plant; a plant whose cultivation or possession holds the promise of profit, coupled with possible jail time. As state and local laws, along with public acceptance, are now changing, this once-furtive farming community is coming out of its greenhouses, building bigger ones and growing giant plants in full sun, less fearful of the hum of helicopters, more exposed and confident than ever before.

I have come to understand and applaud this unique universe, so closed and cautious, protected and protective, and courageously strong in its beliefs. This project respectfully shares and bares witness to cannabis cultivation, illustrating a full season of plant production, from farm to table. 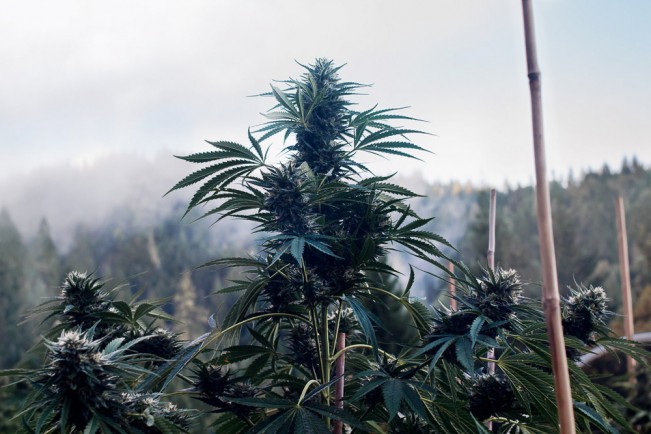 Interview with H.Lee
Just have to get this out of the way at the beginning.  Are you currently stoned?

This interview would probably be more entertaining if i was. 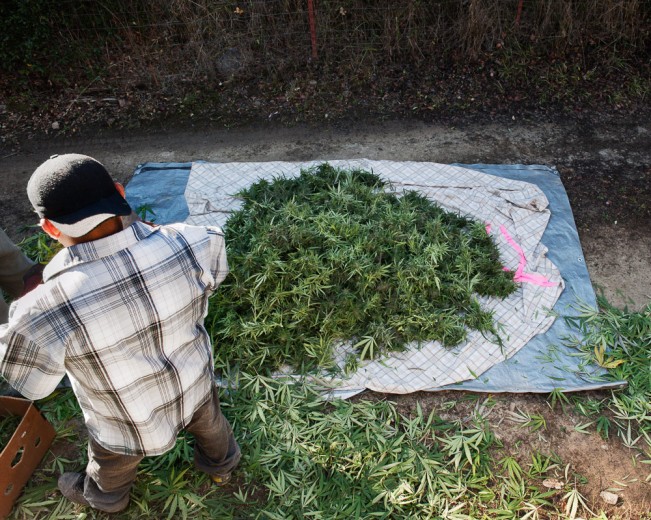 Tell us about how the project got started and how you came to find a publisher?

I spent a lot of time in Humboldt county NOT photographing the weed scene. But in 2010, two things happened: Prop 19 appeared on the California ballot, ushering in palpable change. and, for the first time,  I spent nearly nine months helping on a farm. It was during that particular trim and harvest season that I turned my lens on my surroundings. The time was ripe, if you will. I had no idea that what I was photographing would turn into Grassland; I was just documenting, and exercising my creative outlet. But after amassing a year’s worth of images, I thought I might have had something interesting to show the world. So, I started to shop it around at portfolio reviews, which is where I met the amazing folks at Kehrer Verlag. 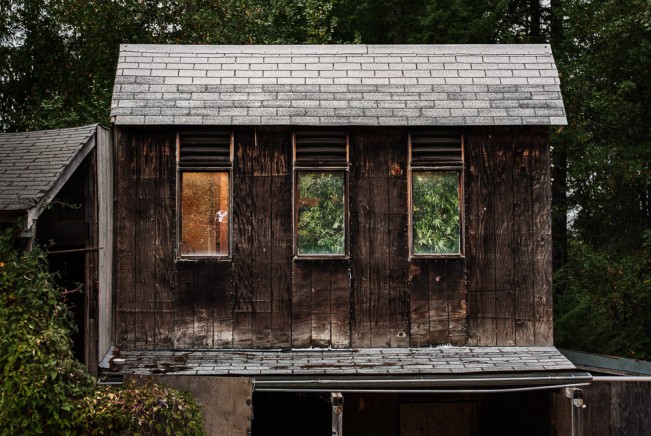 I understand that H. Lee is a pseudonym. Is that so your mom won’t know you smoke weed?

Haha! I promised the people I photographed that if the project was ever published, I would do it under a pseudonym. With that promise, they allowed me in, opened their doors, as long as the faces of those who wished to be hidden remained hidden. As for my mom, in her mind I was living in a Soprano’s episode (she’s never seen Weeds). 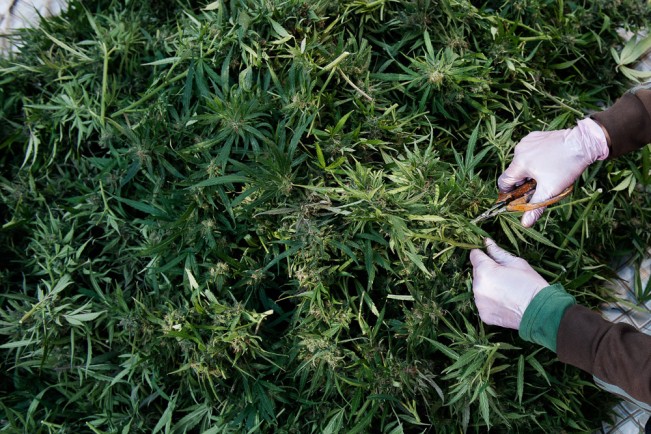 What’s the most interesting part of pot production, that you hadn’t considered?

Frankly, I never considered pot production, period. It wasn’t on my radar at all. So every bit of green and smell and seed and person I encountered was fascinating: from the size of the gardens (a lot smaller than I envisioned) and the knitting-circle-like trim tables to the drying sheds, the making of hash and the plants themselves, which, I discovered, are quite beautiful. 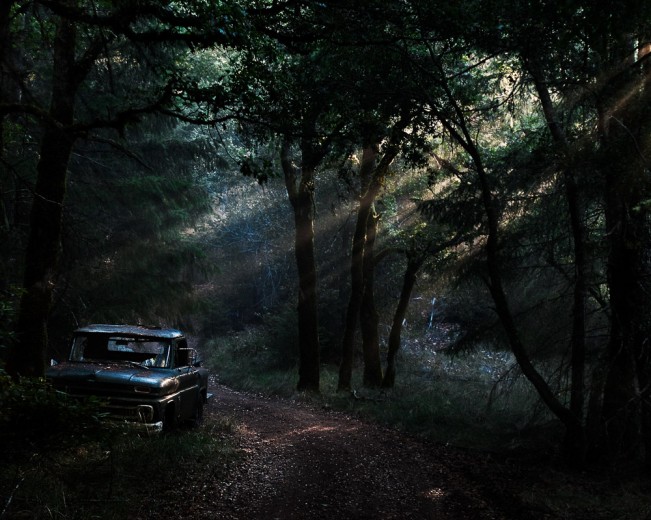 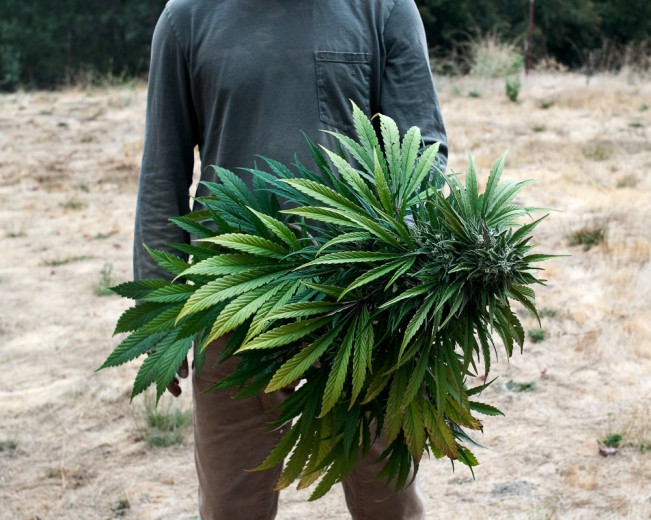 i don’t know about that, but a trim scene can get pretty trippy – sitting around a table for 12 hours or more, sewing scissors snapping away, with people you may or may not know, fingers sticky with resin, shake in hair and clothes, the fragrance pretty much permeating your whole being. 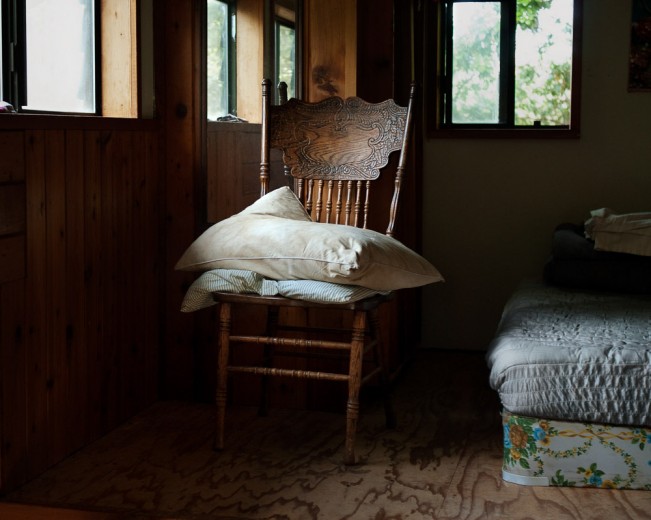 Can you describe what the social environment feels like in those communities? Do different “farms” have contact with each other?

In the hills, your closest neighbor may be a mile away, town could be an hour’s drive. So if you want to isolate, it’s not hard. Still, those who choose to be a part of the community are tightly knit. People may talk in code, or hold their cards closely, but they are generally looking out for each other in some way, watching each others’ backs. There are farmer’s markets, summer art fairs and community events just like any other town. During harvest season, however, the sense of community, especially on individual properties, shoots to another level, as the number of people increases, along with communal cooking, living, working. 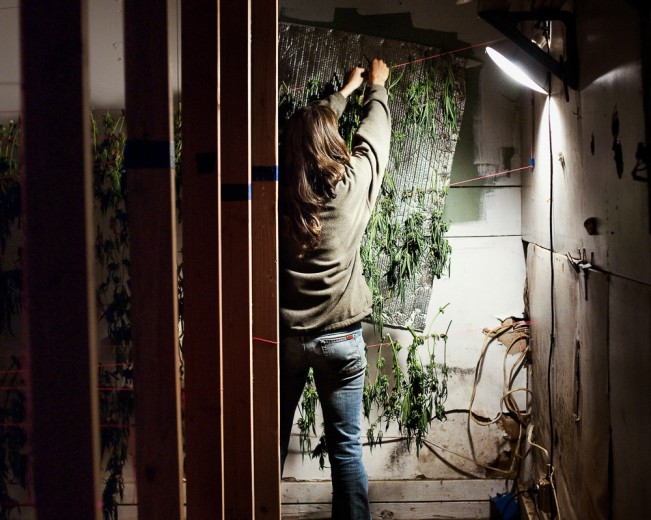 Is this a nomadic lifestyle for the trimmers?  Do they get paid in pot or the normal green backs?
In the fall especially, the harvest season for outdoor weed, people flock to Humboldt from all over the world to snip buds and make pockets full of cash. Many are young travelers on the festival circuit or fresh off of Burning Man who make just enough during those weeks or months to live a backpacker lifestyle the rest of the year. There are plenty of locals trimming too, and city folk who head there annually to make some extra cash for a few weeks.  I don’t know anyone who’s been paid in pot, but i’m sure it happens. 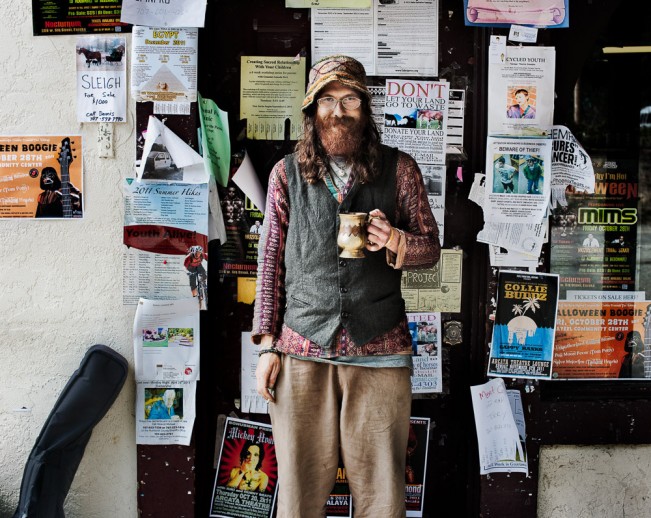 What happens when a pot farm get closed down?

Plants get eradicated. And people might get arrested if they are caught. Don’t know of any “closing down.” 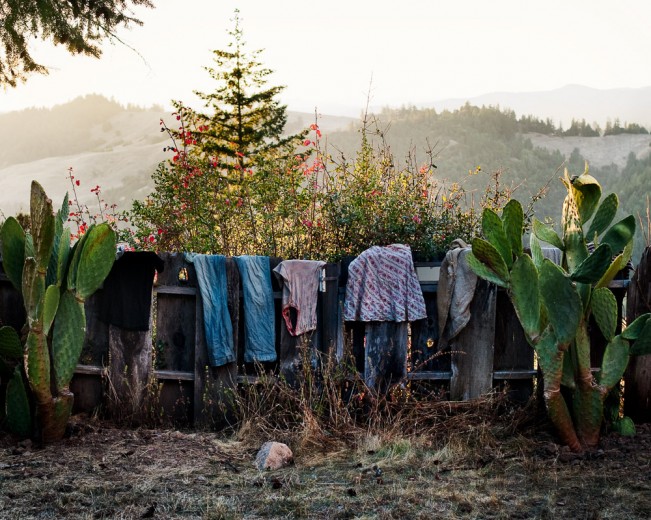 Does H. Lee have any projects coming up?

H. Lee is focusing on getting the book out into the world this year, especially the special editions. I’m particularly proud of the collector’s box which has a secret stash drawer infused with hemp oil, among other paraphernalia that was handcrafted by Rory Sparks. 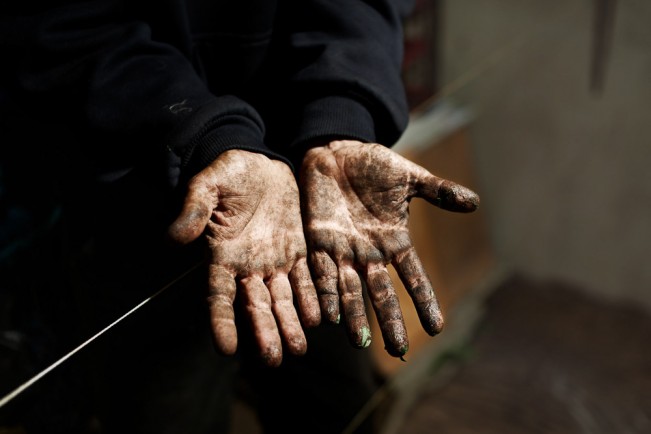 Can you describe your perfect day?  Pot or no pot? Maybe a stiff drink?
A description of my perfect day might compromise my identity. As a grower I know likes to say “everything’s on a need-to-know basis.”  But, yes, there’d be a bourbon on the rocks for sure. 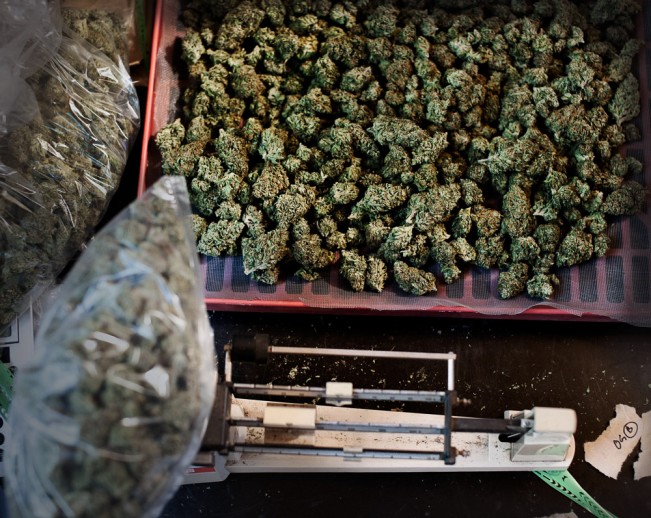 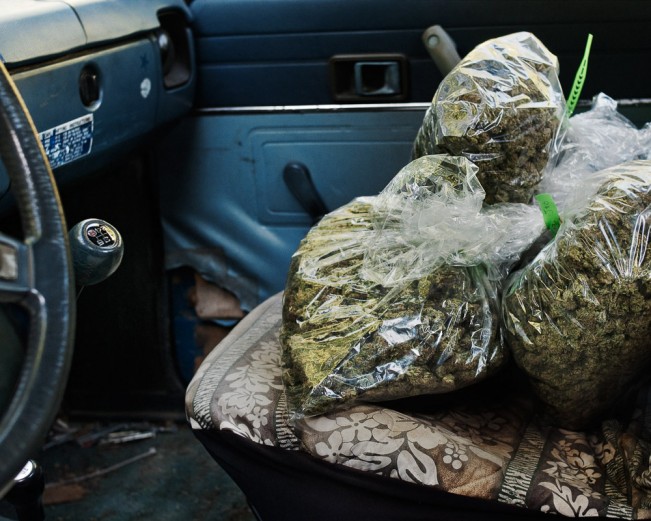 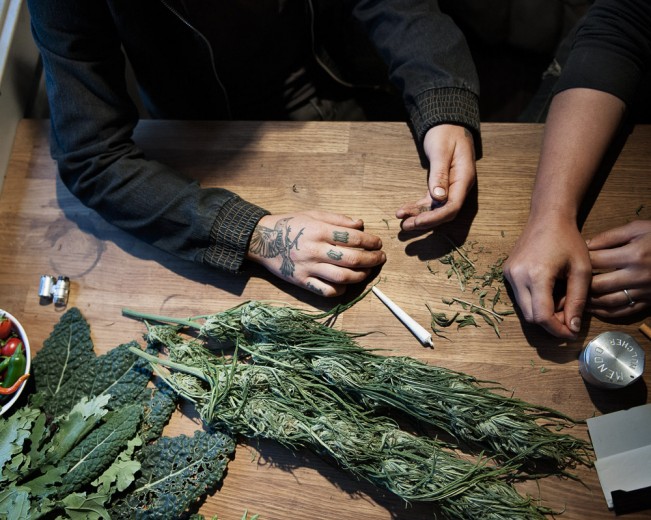 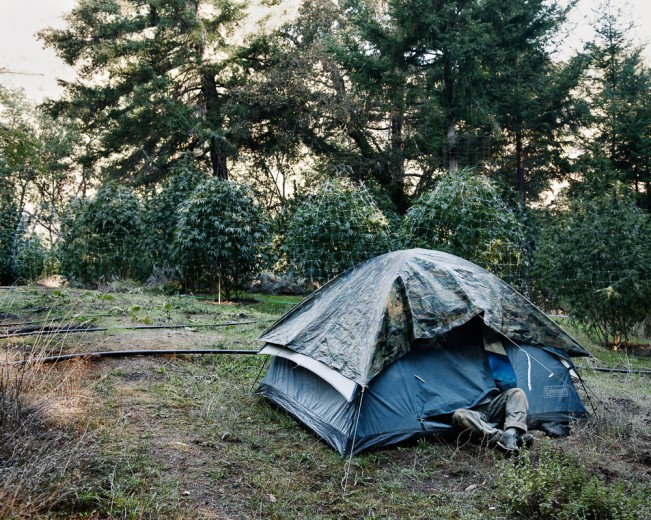 NEXT | Interview with Hiroshi Watanabe: The Day the Dam Collapses >
< Stephen Tomasko: Delira and Excira | PREV