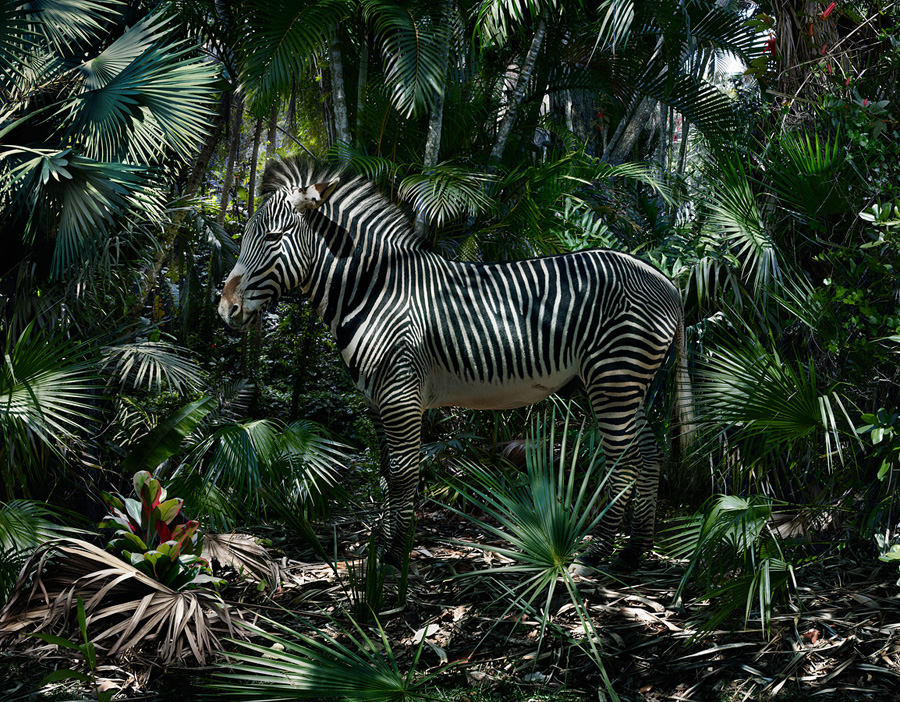 Today, I am sharing an interview that photographer and blogger, Ken Weingart, conducted with photographer Simen Johan. Ken has been producing interviews for his Art and Photography blog, and he has kindly offered to share his interviews with the LENSCRATCH audience.

Simen Johan is a Scandinavian fine art Photographer and Sculptor, who has been creating ground-breaking conceptual works for over two decades. His recent exhibition, Until the Kingdom Comes, presents exotic animals in new and unusual perspectives. The series can be seen at the prestigious Yossi Milo Gallery in New York City.

When did you start photographing animals and why?

Around 2005. Animals, like children, exist within a primal realm that I’m interested in. They’re guided by intuition more than intention and are closer to pure being. The subject matter I use is not as important to me as are the connections and tensions I create within each composition.

What format are you shooting, and how large are the biggest prints?

I shoot all sorts of formats, but my main camera is a Hasselblad 503CW. The longest print I’ve done is 14 feet.

How many prints do you limit your editions to?

What lighting equipment are you using, and how did you choose? Do you bring the animals into the studio?

Mostly natural light or whatever they have at the zoo. On a few of occasions, I’ve photographed birds in the studio using strobe lighting to freeze their motion.

How did you connect with Yossi Milo?

Yossi saw my work in a group show at the Alternative Museum back in 1999.

Where do you find your animals, and how complex does that process get?

There’s no planning when working with live animals and nature because you’re really only going to get what you’re going to get. I visit zoos where I shoot like a tourist, through fences and glass. In the wild I go to places where animals come close. My camera is bulky and slow, and lighting conditions are never ideal.

You are from both Norway and Sweden. What do you miss about Sweden and Norway, and what do you like about living in the US?

I’m from Norway, but my mom married a Swede at some point so we moved there. I miss friends, family, food and the simplicity of things there. I like New York City’s cultural diversity.

How would you describe the sculptures you make, and how do you make them?

For my current show, I sculpted four legged anthropomorphic shapes out of clay. Primitive and ritualistic, they’ve exploded with cracks opening up to interior black voids. They’re wrapped in fabric and ornamented with feathers that mimic hair. They’re open to interpretation, but I see them as totems to the evolving being— that part of us that has evolved from water to land, from four legs to two legs and in a million years might look nothing like us.

How did you learn to make sculpture?

The sculptures grew out of a desire to make my exhibitions more immersive and bring my work into the tangible world. The way I make my sculptures is similar to the way I make images, by adding and subtracting elements until the final image emerges-. There wasn’t much of a learning curve and I’m not sure I see them as separate practices.

What materials do you use for the sculptures and how long do they take?

I’ve used various materials including ceramics, cement, barnacles, taxidermy, feathers and foliage. They take less time than the images because there’s no pre or postproduction and there’s more room for mistakes.

You used to shoot children. How did that specialty come about?

I moved to New York and started making those images when I was nineteen. Looking back at that work now, I can see how the initial images reflected my coming of age: awkward, alone and broke in what was at the time a pretty harsh city. Eventually the work became more engaged with the imagination and innate tendencies for ritual and exploration.

Are you retired from commercial work? Do you miss it at all?

I was never a “commercial photographer,” but over the years I’ve done a few one-off ad campaigns. Those were fun and well paid.

What do you find is the main difference between commercial and fine art photography?

Commercial photography sells; art that I like, explores and confronts.

How hard is it making sales and money in the world of fine art?

It’s hard for most, but easy for a few.

What was your series “Evidence of Things Unseen” about?

That series showed children engaging in creativity and play that often bordered on ritual or mad science. On some level they were metaphorical for my own creative process.

Do you still want to do film?

Have you thought about teaching?

What are you doing exactly in Photoshop? How many layers is a typical image, and what Photoshop processes and what 3rd party filters do you use and like?

I primarily use basic tools like the lasso, the paintbrush and masking. I rarely use filters except for blur and sharpening and my files have too many layers to count.

How long does each image take to construct, and what goes into your compositing?

Usually a couple of years. At any given time, there’s a fairly large revolving group of images that I’m working on. I add and subtract elements as ideas come to me, or when the opportunity to photograph a certain landscape or animal presents itself.

How did you learn Photoshop? Are there any books you liked the most?

I went to school before Photoshop was part of the photography curriculum so I had to take a graphic design course to get computer access. From there on I’m self-taught.

How important was Art school, and what did you learn?

I found it helpful to get honest critical input on my work. Outside of school people pretend to like your work even when they don’t. I didn’t go to grad school, but people who go to prominent ones tend to make important connections and get head starts on their careers.

Do you have your next ideas or series idea in mind?