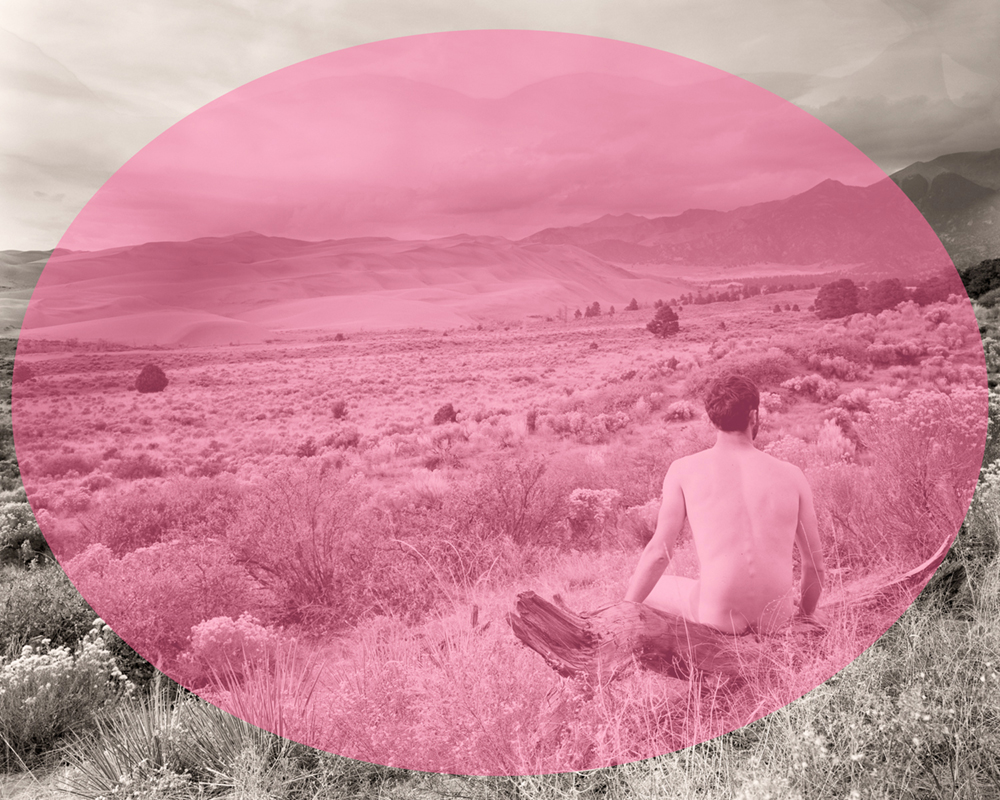 I interestingly met Christa Blackwood by chance and not by chance – I was walking by her table at Houston’s FotoFest in 2016, and felt a potent energy drawing me to her work. It is some of my favorite work I came across that entire trip. Later I saw how it could look like presented in gallery form, when I visited Sarah Sudhoff at Capsule Gallery in town. I found myself standing and looking at the work, for quite some time, taken in.

With much subtlety and seeming gingerness, Christa takes the most elegant and potent of actions, simultaneously; effortlessly managing a balancing act between strength in a gesture and grace in execution. I equally admire the skill with which she achieves this balance and her unyielding attitude toward her statements.

Utilizing the tools of metaphor and using a placeholder and symbol of her own making that yet carries with it weighty underlying meanings, Christa manages to visually speak about some of the most important and pressing issues not only today but almost timelessly, with a sense of conviction as well a welcoming and open invite to the conversation. Today, I interview Christa about two of her projects, Prix West and Naked Lady, Red Dot.

Christa Blackwood is a photo, text and installation artist working with themes related to identity, history, and popular culture. Her visual voice was developed while a student at New York University, when she began producing street installation art such as Butcherknives (1991), a work that addressed issues of sexual violence. A chilling juxtaposition of billboard-like close-ups and text from poet Michelle Kotler, Butcherknives, was plastered all over the streets of lower Manhattan on the evening that the William Kennedy Smith verdict was announced. The poster’s timely and provocative appearance resulted in heightened critical attention for Blackwood, including an invitation to join the Women’s Action Coalition (WAC) from renowned artists and scholars, Kiki Smith and Lucy Lippard. Blackwood is currently based in Austin, Texas.

Her dream-like sequences and texts employ multiple techniques and methods, fusing traditional, historical and alternative processes with contemporary practices such as iPhone image-making and street installations. Blackwood received her MA in Studio Art from New York University and BA in Classics from The University of Oklahoma. Her work has been featured in several publications including The New York Times, NYQ, New York Newsday, The Village Voice and The Chicago Sun Times. She has exhibited in galleries and museums throughout the U.S. and abroad. 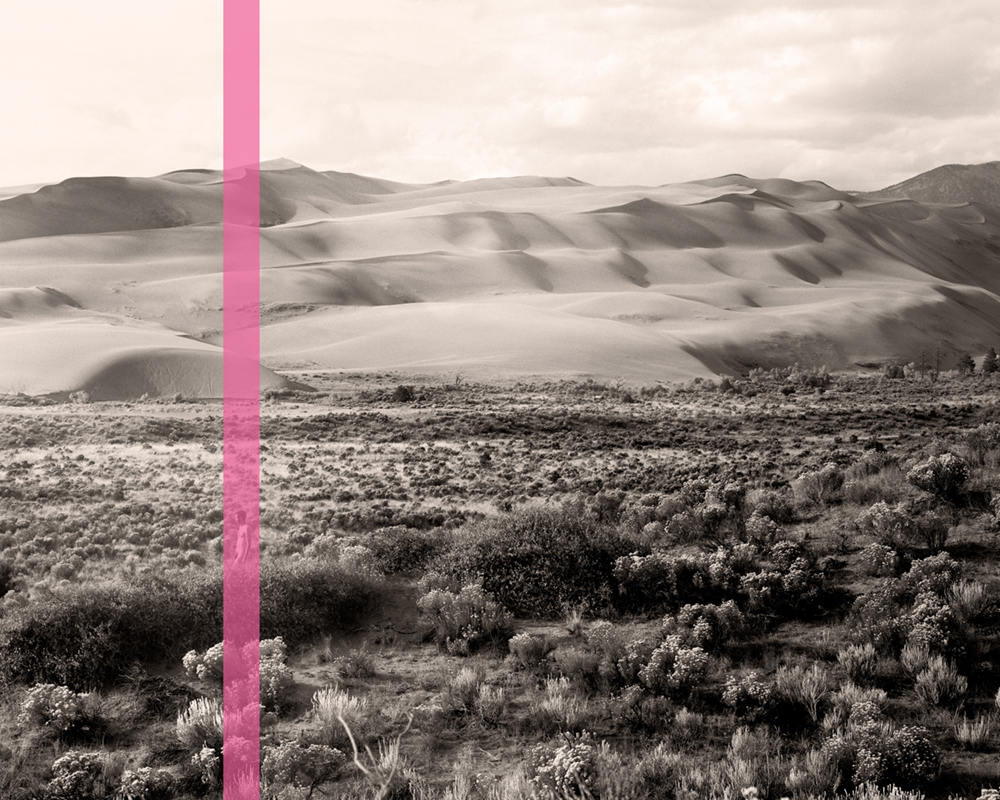 Christa Blackwood’s Prix West is a series of large-scale portraits of seven attractive young men.  A critical component of the artist’s Dot Red series, Prix West departs from normative notions of a male spectator and female subject, instead casting the nude male youth as an object of a lustful and desiring (female) gaze.

For the last 4 years, Austin-based artist Christa Blackwood has taken her large format cameras and models and hit the road.
Traveling around Texas and across New Mexico, Colorado and Utah, her work stages the male nude body within the majesty of North America’s gorgeous western landscape, and situates it in a genealogy of classical photographic studies of the human figure. 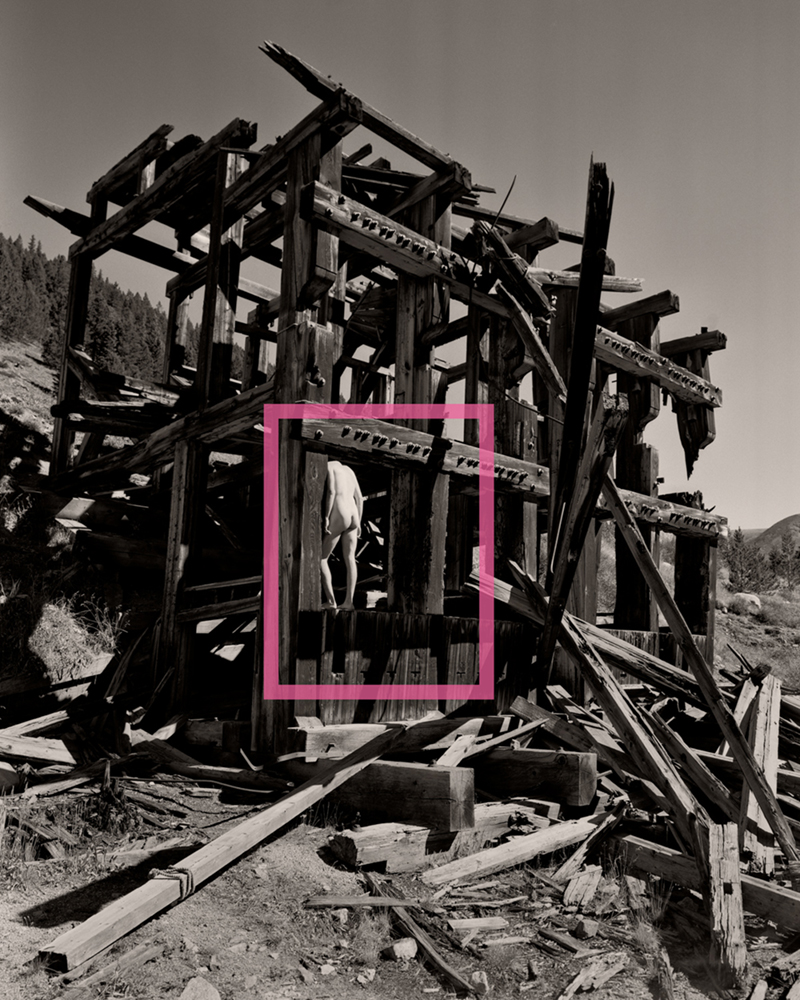 One thing I loved instantly about your work was the use of simplicity for it’s strength in the way you convey your concepts. I think there’s a reason we find feelings of beauty and being unbreakable in anything executed in this way.  Do you feel you approach most things in your life in this way?

I am drawn to and process images better in simple, direct ways. For me there is a subtle gravity and beauty to images that are not so visually cluttered.

When I go to the movies and there’s lots of action-visual, aural stimuli, quick, blurred camera movements,  I typically place my fingers over my eyes and put my thumbs in my ears. A few years ago my son was tested for ADHD, I voluntarily took the test too because I enjoy taking tests and I wanted to experience the test he was given so I could better understand it. When I finished, I assumed that I had sailed through 3 of the 4 sections, making a few errors in the impulsivity section, but nothing drastic.

However, when the results came they showed that I miserably failed one section, the section that tests how your brain processes multiple pieces of stimuli/information and I really can’t do it. 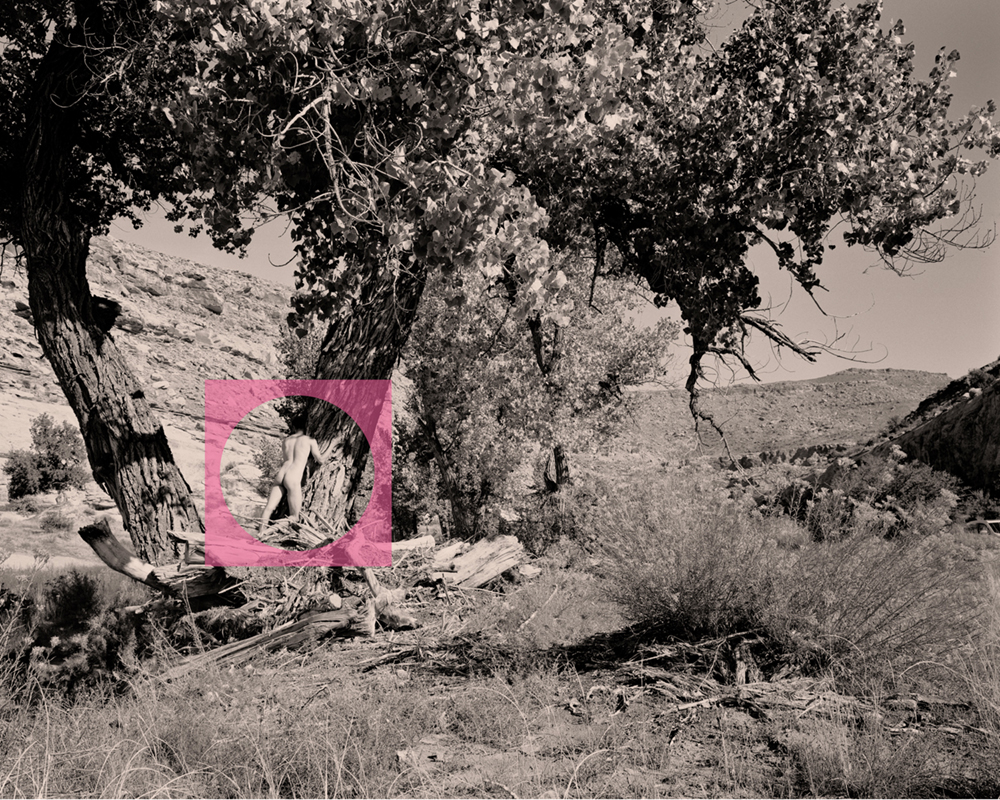 Do you think you had to work hard to initially find a way to express your thoughts in these projects, or, did it come more like a sort of language you were already familiar with – or neither?

The idea always comes first, how to articulate it visually so the work is compelling and something people will engage with is the hard part. To make work that is compelling I think there a three things that need to happen-idea, technique and surprise. You want the technique to be good, but not the focal part of your work. An element of surprise or wow is important too, because it draws people in. When I started photographing the young men for the Boys of Collodion, a lot of mature photographer guys were rattled. They would brusquely ask, “What are you doing with these Boys?” They were not comfortable with seeing a young man idealized as an object of beauty. It’s pretty standard practice for young women to be the object of desire, but not for men-at least in the heterosexual world. 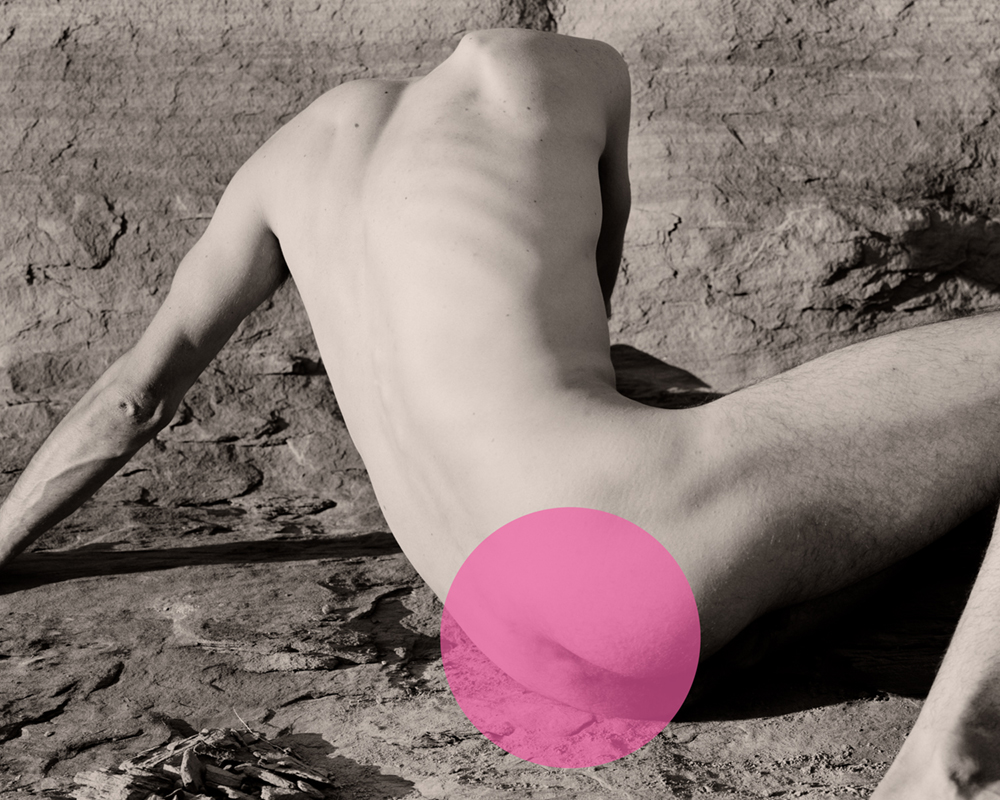 You’re obviously talking about incredibly serious and weighted topics in your work – but you do it in a way that lifts all potential taboo, cumbersomeness, clashing. I think this takes serious skill!  Do you think you communicate in the same way, on a daily basis, vernally and otherwise, in places where you’re not making artwork?

Well, I certainly hope that I do! I like to make it fun and not too heavy handed or didactic. There’s a lot of playfulness or joking around when working with the models. They know and understand the idea behind the work and have looked at my photo books and the biographies and some autobiographies of their female muse counterparts. They know they have been selected for their physical attributes and age – they are the eye candy, they are the object of beauty,,,,,AND they are all very bright creative young men.

I am so fortunate and grateful to have them. We just finished shooting some 16mm film with an old Bollex, like Andy Warhol used for his screen tests, the kind that doesn’t need a battery because there’s a crank on the film camera. The camera that we used was one that one of the models checked out for us to use from his filming class at college. He loaded the camera, showed me how to work the Bollex and was cameraman for two of the models filmed. We played the Boys are Back in Town as background music. 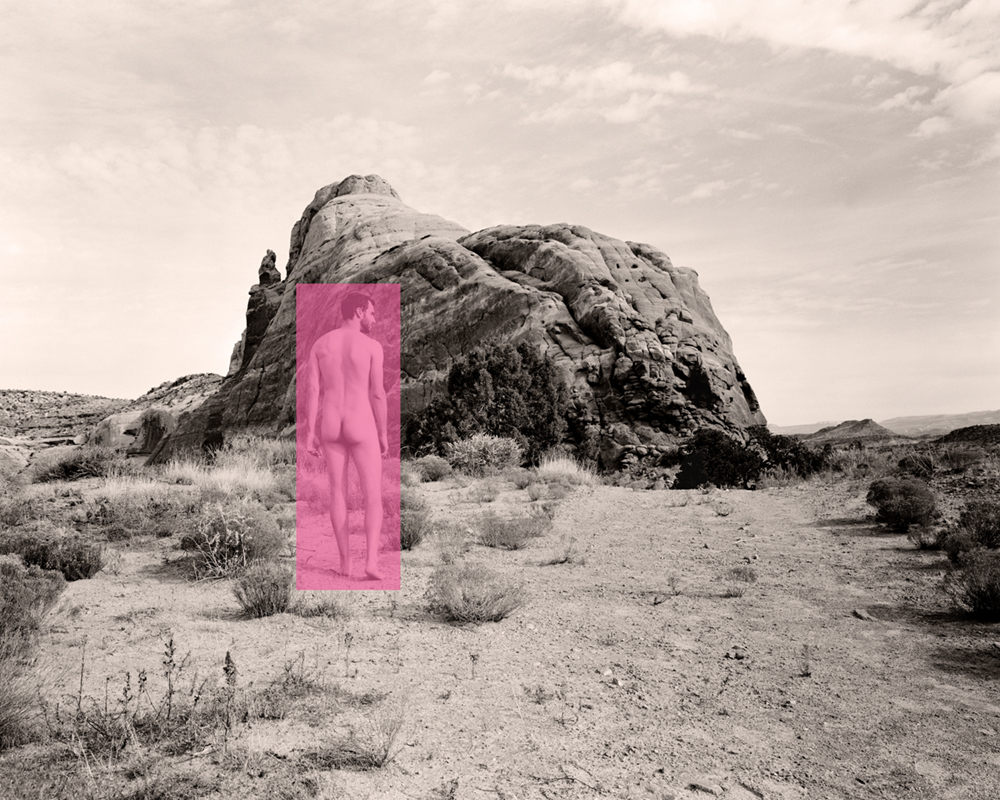 What’s one one of the first experiences you can describe that got you started on this project?  What drew you in?

The dot red landscapes came about from a couple of experiences of that I had as a student in photography workshops. There are many different circles/groups of photography and I was pretty surprised to see ideas about representation that I thought of as sexist or archaic still viewed as the norm and the norm for beauty in these workshops. The workshops that are sold because the students have sanctioned access to certain human figure as their subject-the slim, keen featured young, naked woman. 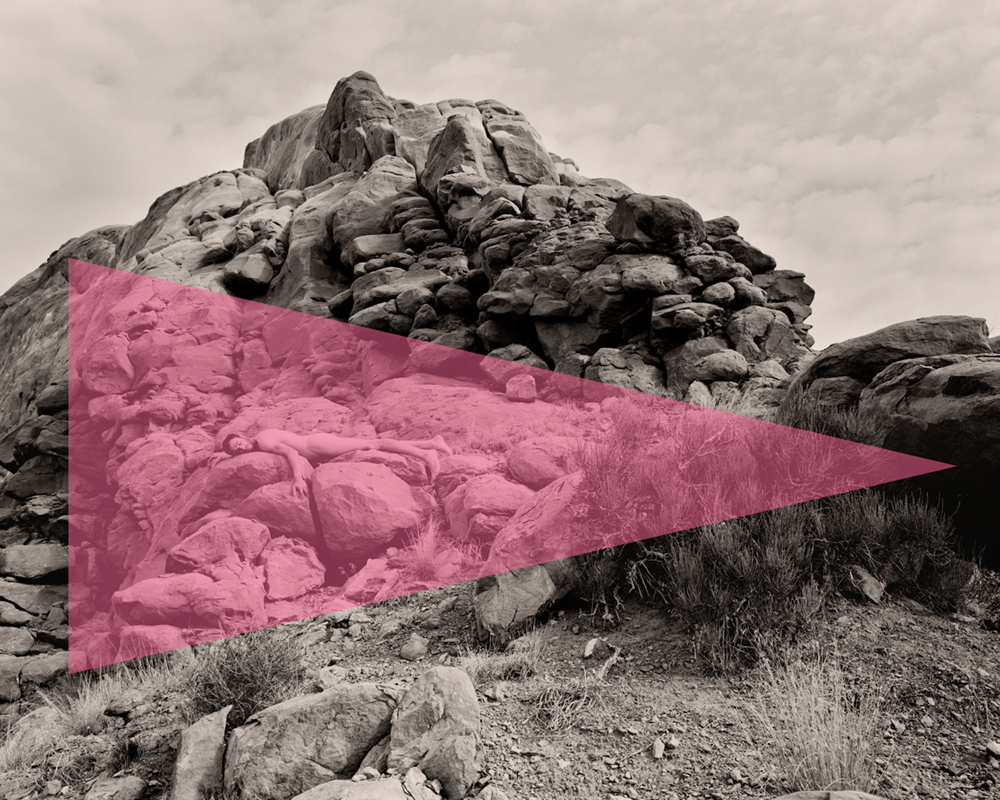 Do you see yourself pursuing themes of gender, identity, feminism, power, in various ways going forward?  Are there other related or non-related themes you find worth exploring?  If so, how do you find it can all be tied together?

Yes, the idea is always what hooks me in and my ideas are always are about my relationship with visual culture and identity. What’s that phrase, the personal is the political? I don’t run around with a camera strapped on myself 24/7 documenting my life, I have ideas in my head that need to be created visually and since I’m a lousy renderer, the camera is my tool/weapon of choice. 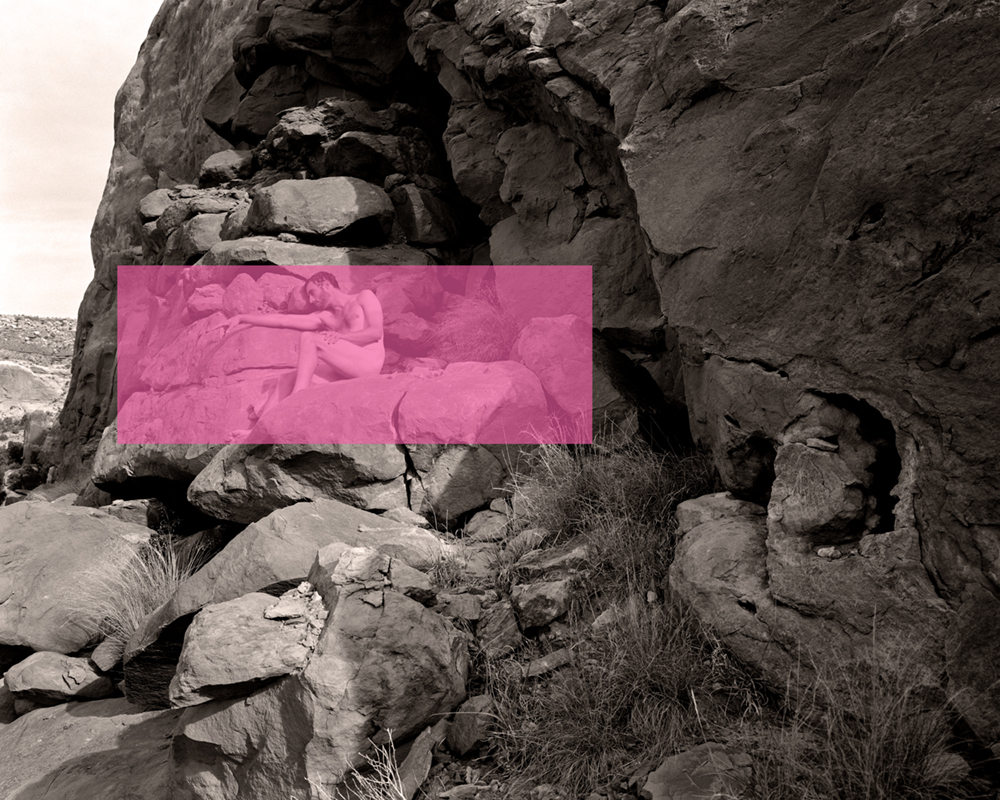 Finally, what’s a book/movie/quote/person/artist/or place, that’s is giving you inspiration these days?

There’s so many! I just saw Greta Gerwig’s directorial debut, Lady Bird, in Austin a couple of weeks ago when it premiered at The Austin Film Festival. A friend invited by the festival’s sponsor invited me and I had no idea what the film was going to be like and had made the assumption that it was a documentary about the life of First Lady, Lady Byrd Johnson. It was simply wondrous, poignantly and humorously evoking the pathos and pleasure of a girls senior year in high school senior without her identity being tied to a male character- companion/suitor/boyfriend-so refreshing, so funny and so endearing. Last night I went to see it again with my daughter and three of her girlfriends. They love it too. 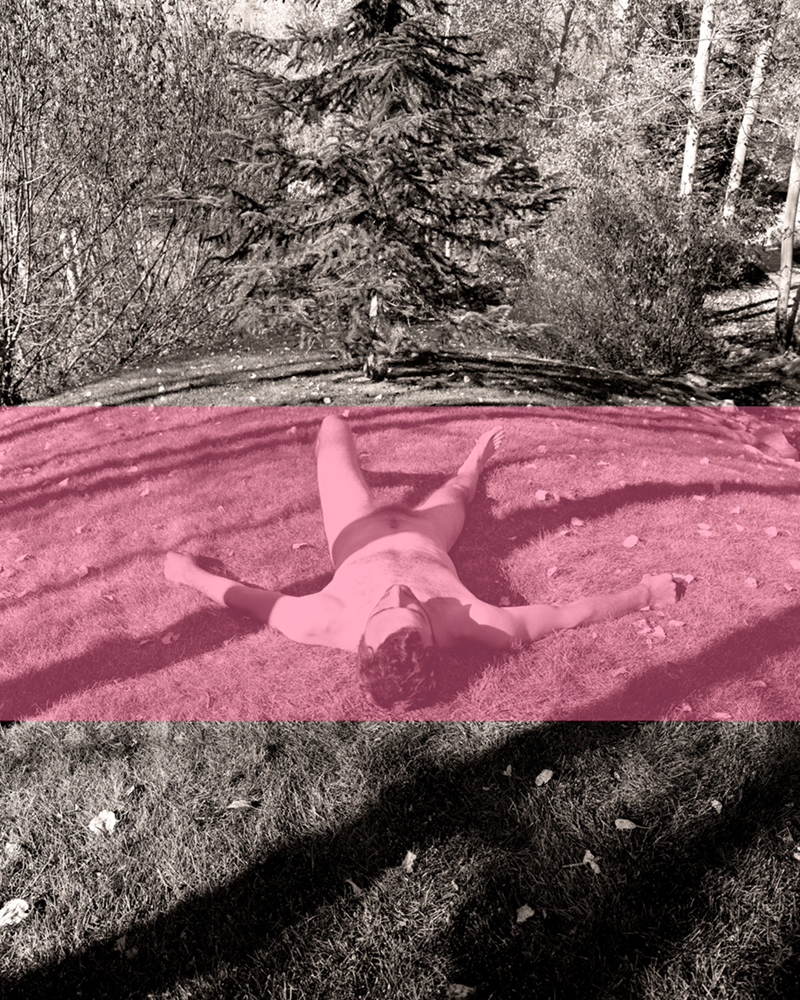 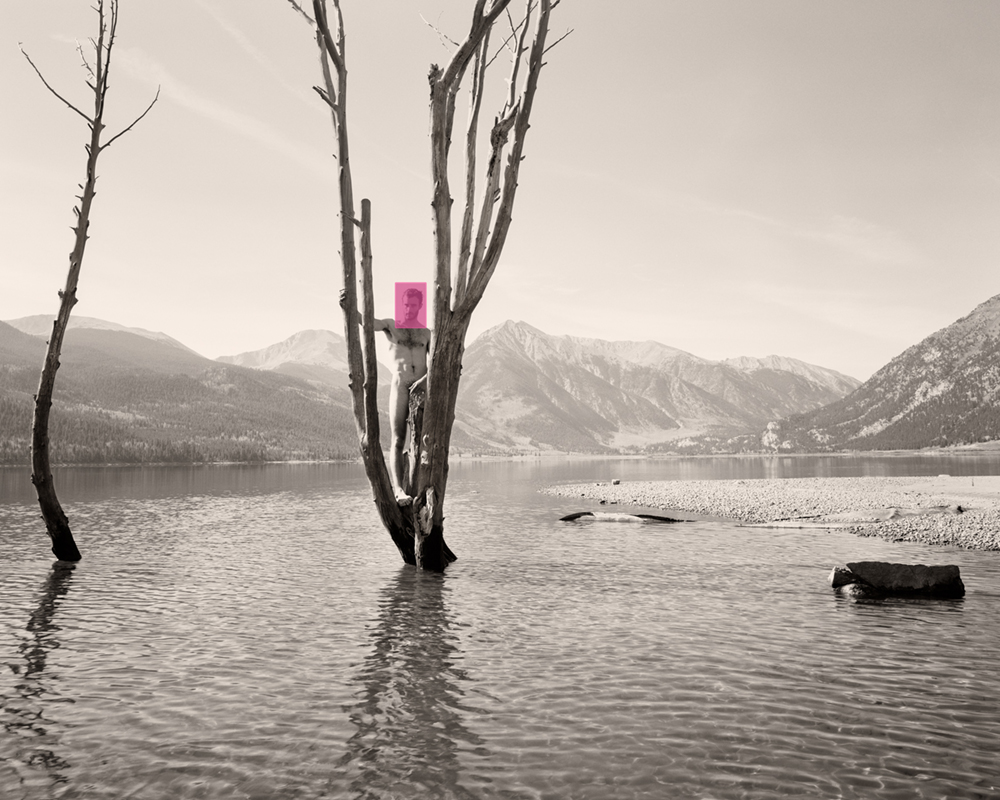 Naked Lady: A Dot Red, a series of hand-pulled photogravures, explores new perspectives on traditional genres and images found in landscape and portrait photography. By combining historical photographic techniques with more contemporary conceptual strategies, these works shift the focus of attention, and enable a reconsideration of its classical subjects Blackwood’s work employs both historic and modern photographic techniques to critique and give a contemporary and feminist voice to her photography. Exploring the idea of “the figure” with a red dot, backgrounded by historical landscape photographs, tradition and contemporary theory mingle, merge and clash. These traditional landscapes – historically photographed by men – act as metaphor for a male view, and through this the feminine metaphor of the “red dot” emerges and creates a visual enigma which deliberately defies this tradition. Often and traditionally portrayed as nudes, the female body in photographs stands in stark contrast to the portrayal of men – often the ones taking the portraits – famous male photographers such a Weston, Steiglitz, Man Ray, etc, who commonly employed “the male gaze” approach. A final, distressing statement is made in the last photo of the series, the red dot itself, with an anonymous female figure, divided. – Tanner Young, Filter Photo 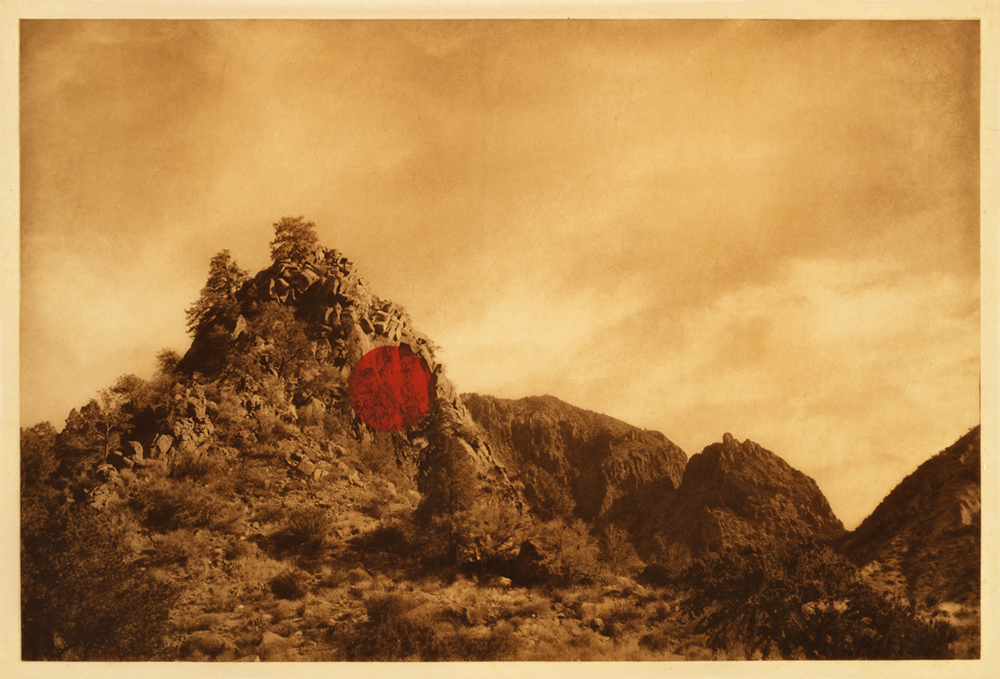 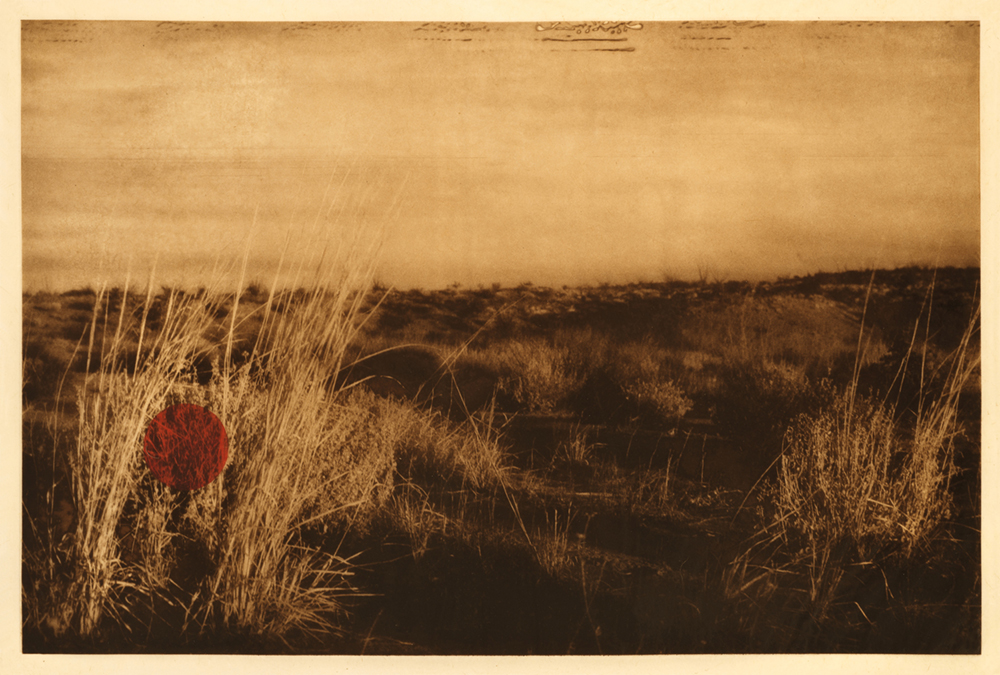 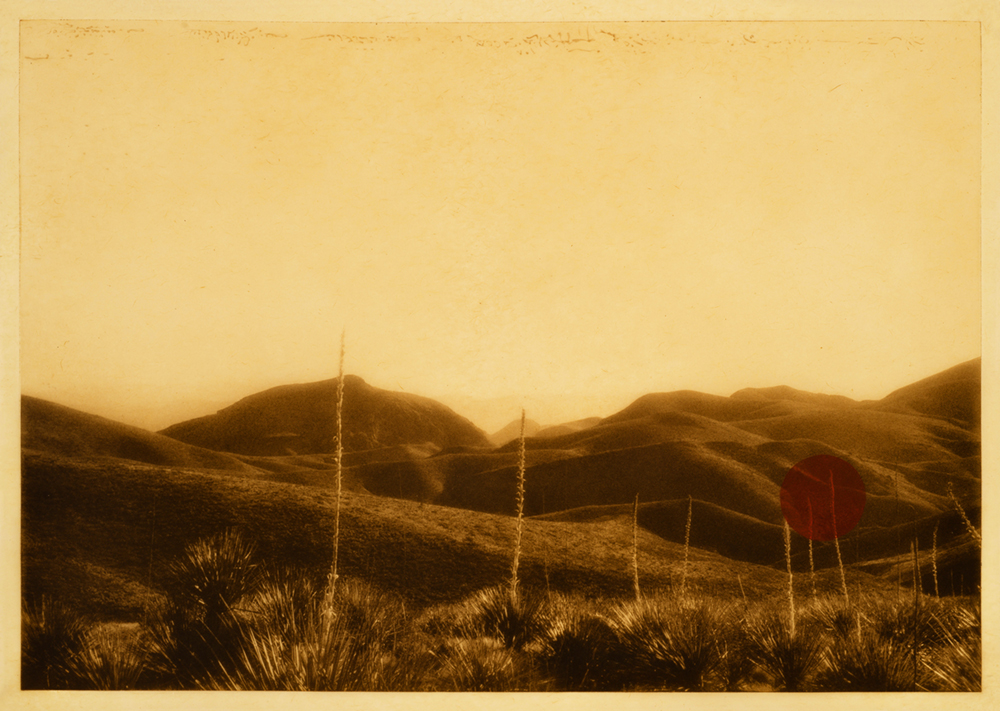 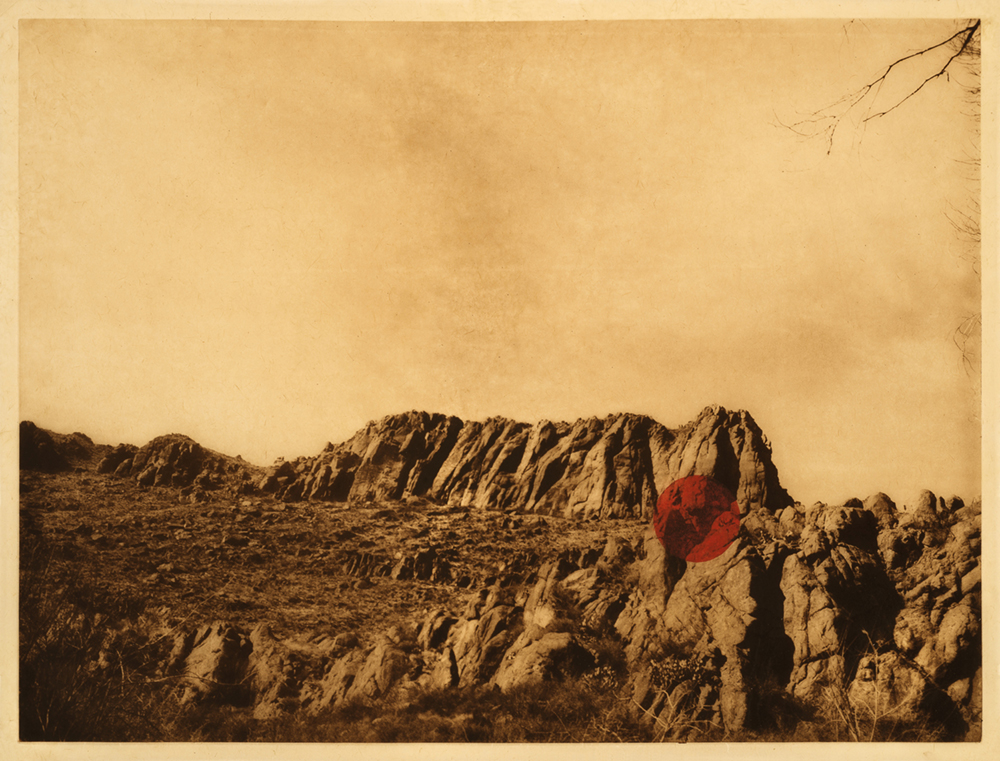 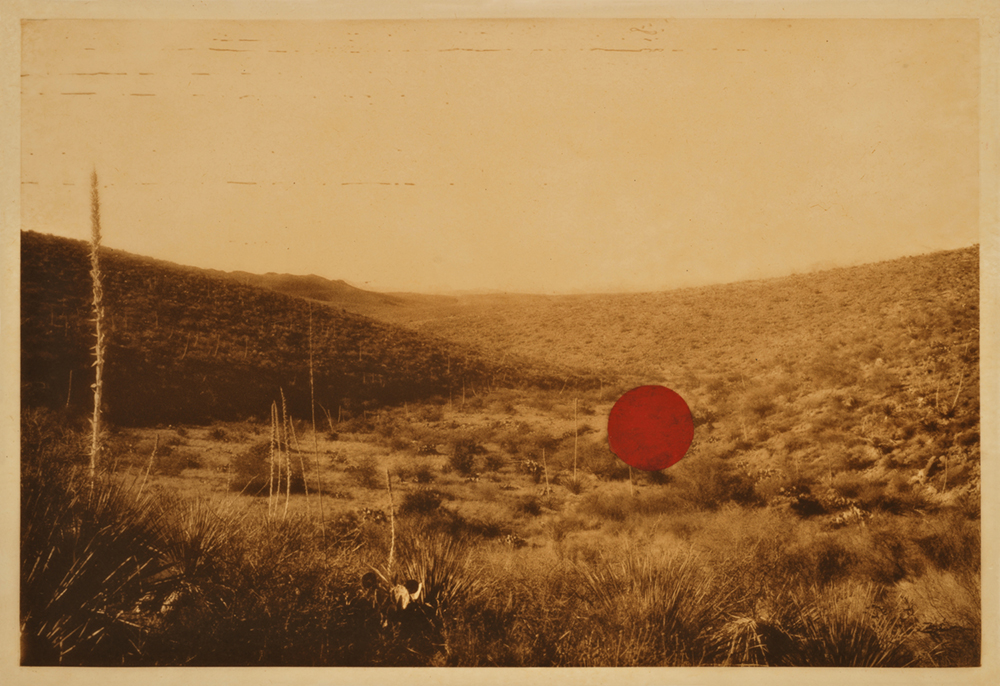 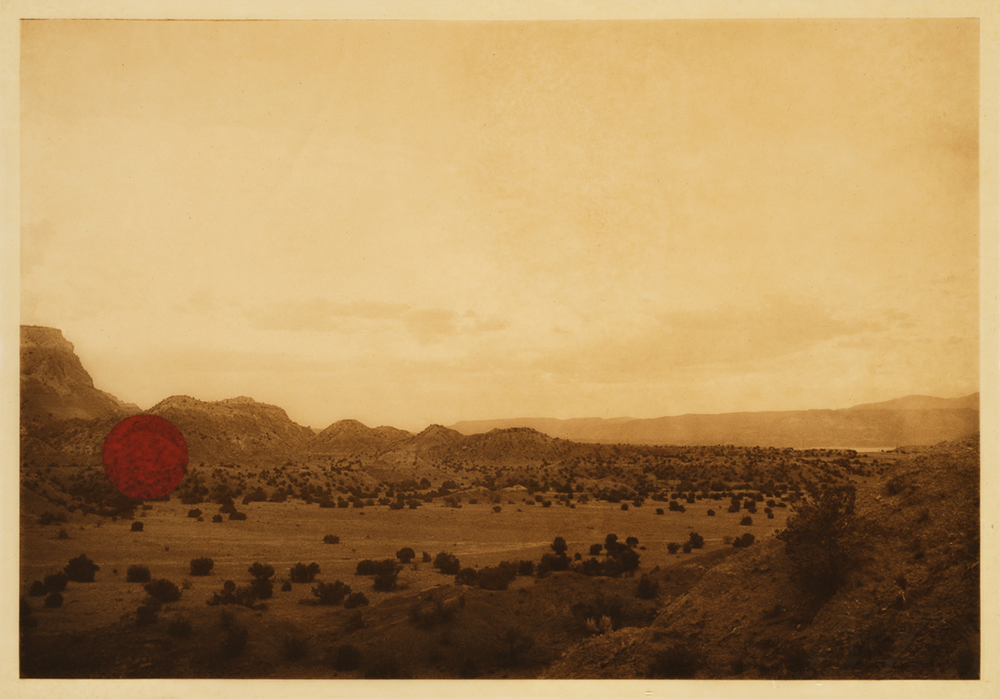 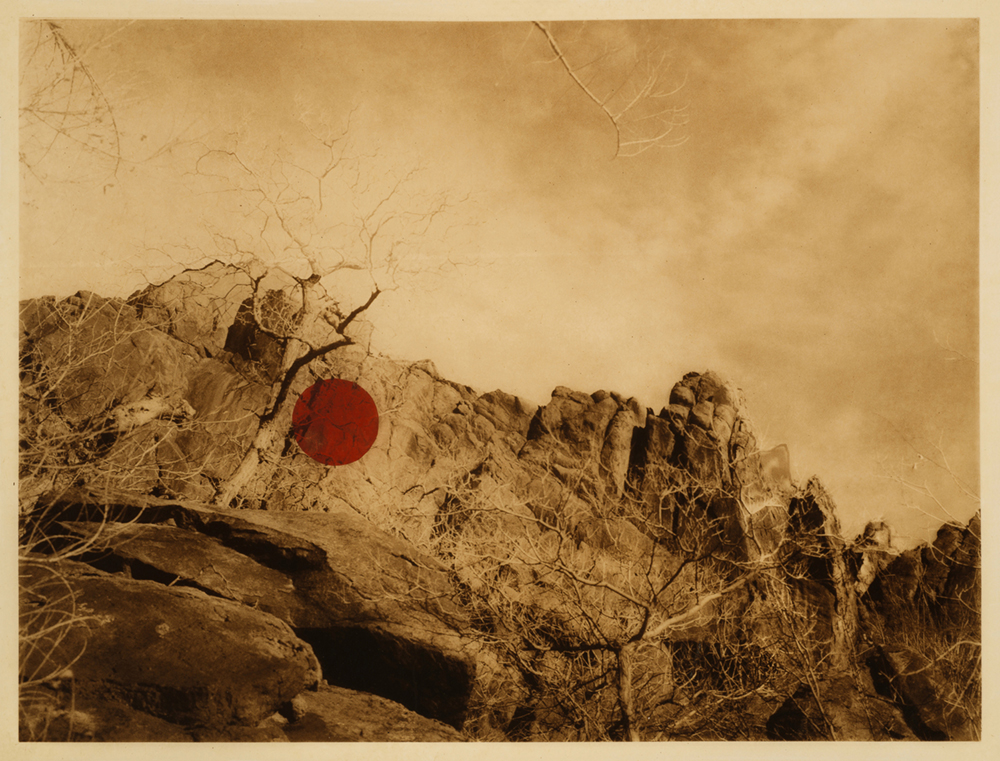 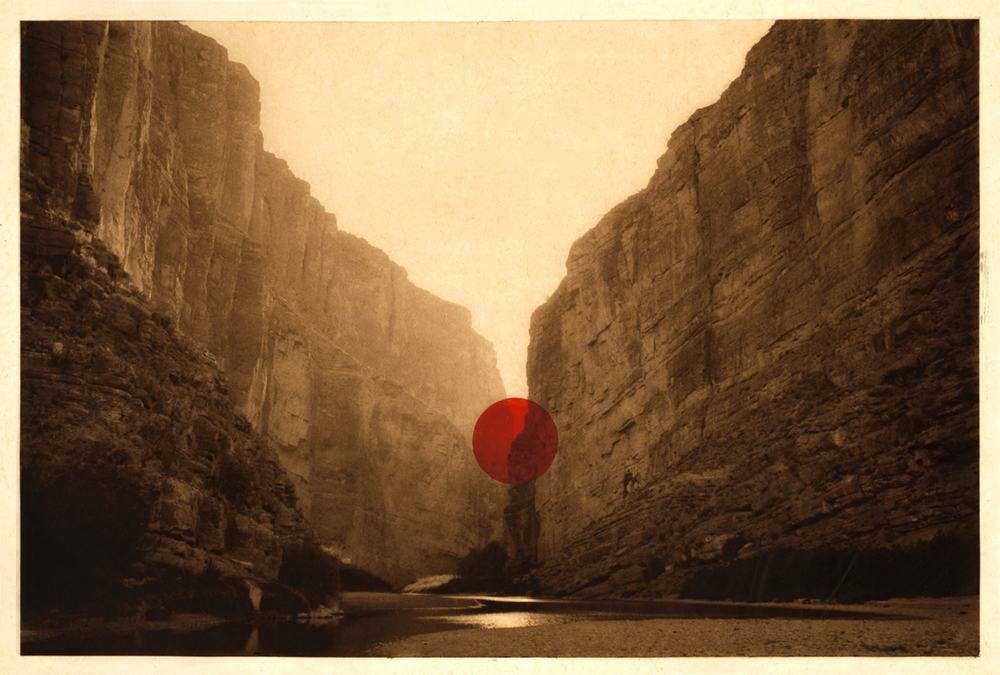 NEXT | Adrain Chesser: I have something to tell you >
< The Richard McCabe Mixtape | PREV